Rider Obituary: I had planned an interview with British ex-pro Jim Moore who emigrated to Canada in 1974; he enjoyed a long and varied career – from amateur road and track man in the UK to ‘independent’ in France, representing GB in the 1964 Tour de l’Avenir, a ride in the Skol Six Day, a successful pro career in the UK before crossing the Atlantic, I was looking forward to speaking with him. 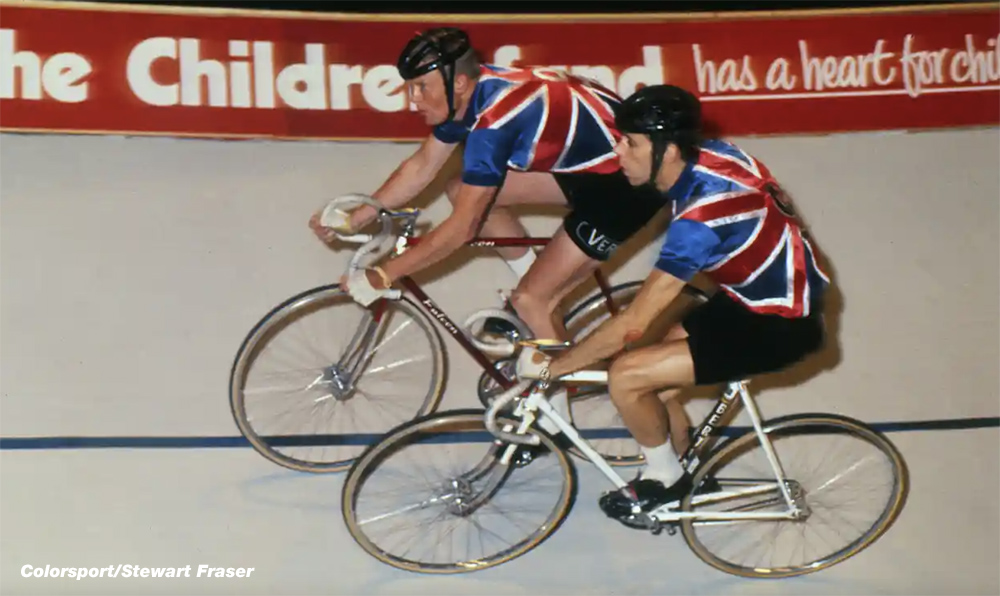 Old Father Time doesn’t mess about, not for the first time he’s beat me to the punch.

But sadly Jim passed away in June of last year, a few moth’s before his long time friend and fellow Vancouver resident Norman Hill. However, Scottish ex-pat and former Glasgow Ivy CC man, Gus Patterson connected me with Jim’s widow, Joan and she very kindly shared her memories of life with Jim with me.

Perhaps it’s because I’m a dinosaur but there just seems to be so much more colour to riders from the 60’s and 70’s – in those pre ‘internet, mobile phones, cheap flights days. English wasn’t the universal language and to relocate to France to race took much fortitude.

Like many, Salford-born Jim entered the sport via the CTC – Cyclists Touring Club – then gravitated into racing, initially time trials and then on the track at the famous but now sadly gone, Fallowfield Stadium in Manchester. He soon caught the ‘massed start’ bug, riding for Manchester Mercury Road Club with his first appearance in the palmarès websites listing the Woodbank Trophy at Stockport in 1959 as his first win.

He finished his apprenticeship as an engineer with Metropolitan-Vickers in 1961 and promptly resigned to head across the Channel to Saint Brieuc to race as an ‘independent’ or ‘semi-professional’. I could find no details of his French palmarès but races in Brittany and Normandy were plentiful in those days and he made enough in place money and primes to support himself and spent four years in the Heartland of French cycling.

In the winter he would return to the UK to work and build savings. It was during one of these winters home he met his future wife, Joan who remembers; “When he was home from France in the winter he’d get a job, I was working at De Havilland the aircraft manufacturer and Jim was working there as an engineer – that’s where we met. But then he’d go back to France in March and he wouldn’t return until October but we’d write to each other and I go over on my holidays.” 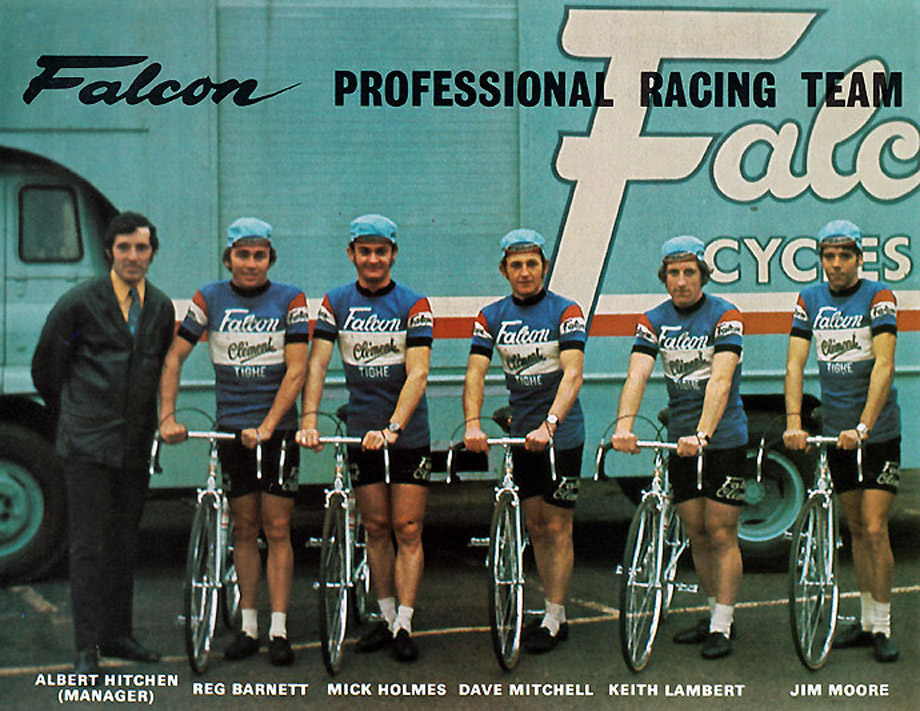 In 1964 he rode the Tour de l’Avenir with the British team finishing 64th @ 1:51:33 to the late, great ‘Campionissimo’, Felice Gimondi with soon-to-be big names like Lucien Aimar, Jos Spruyt, the late Desire Letort, the late Raymond Delisle and Gerben Karstens all in the top 10 on GC. When Jim returned to the UK, he turned pro with some websites showing him as having ridden for O’Brien – EG Bates in 1964 but what is sure is that he rode for the Croad team for three seasons, 1966 to 1968. His other teams were Bantel, alongside pursuit king, Hugh Porter from 1969 to 1971 then Ernie Clements’ Falcon team in it’s various incarnations from 1972 until the end of his career in 1974. 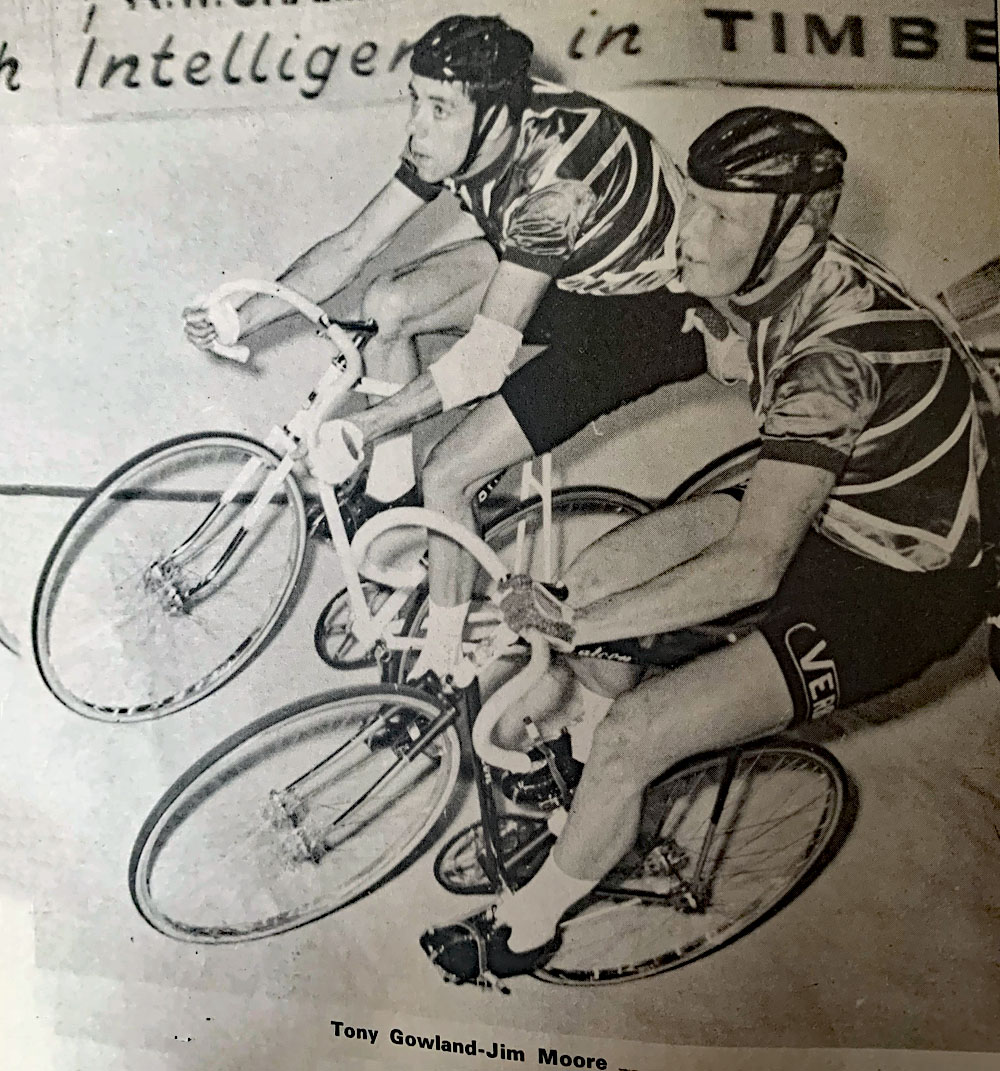 Jim married Joan in 1967 and she had to adapt to life as the wife of a professional cyclist; “I didn’t really understand what was involved in being a professional cyclist, I knew about the Tour de France of course – I thought the leg shaving thing was a bit strange but it was lots of fun going to races where I’d meet up with other riders’ wives and girlfriends. I just got used to being left on my own when he was out on long training rides, and so I pursued my own hobbies like walking and hiking.”

I asked if Joan went to most of his races; “oh yes, I remember going to watch him in the Skol Six but ironically I wasn’t at his biggest success when he won the Tom Simpson Memorial Race in 1972 as I was probably taking care of our young daughter Nicole at that time” 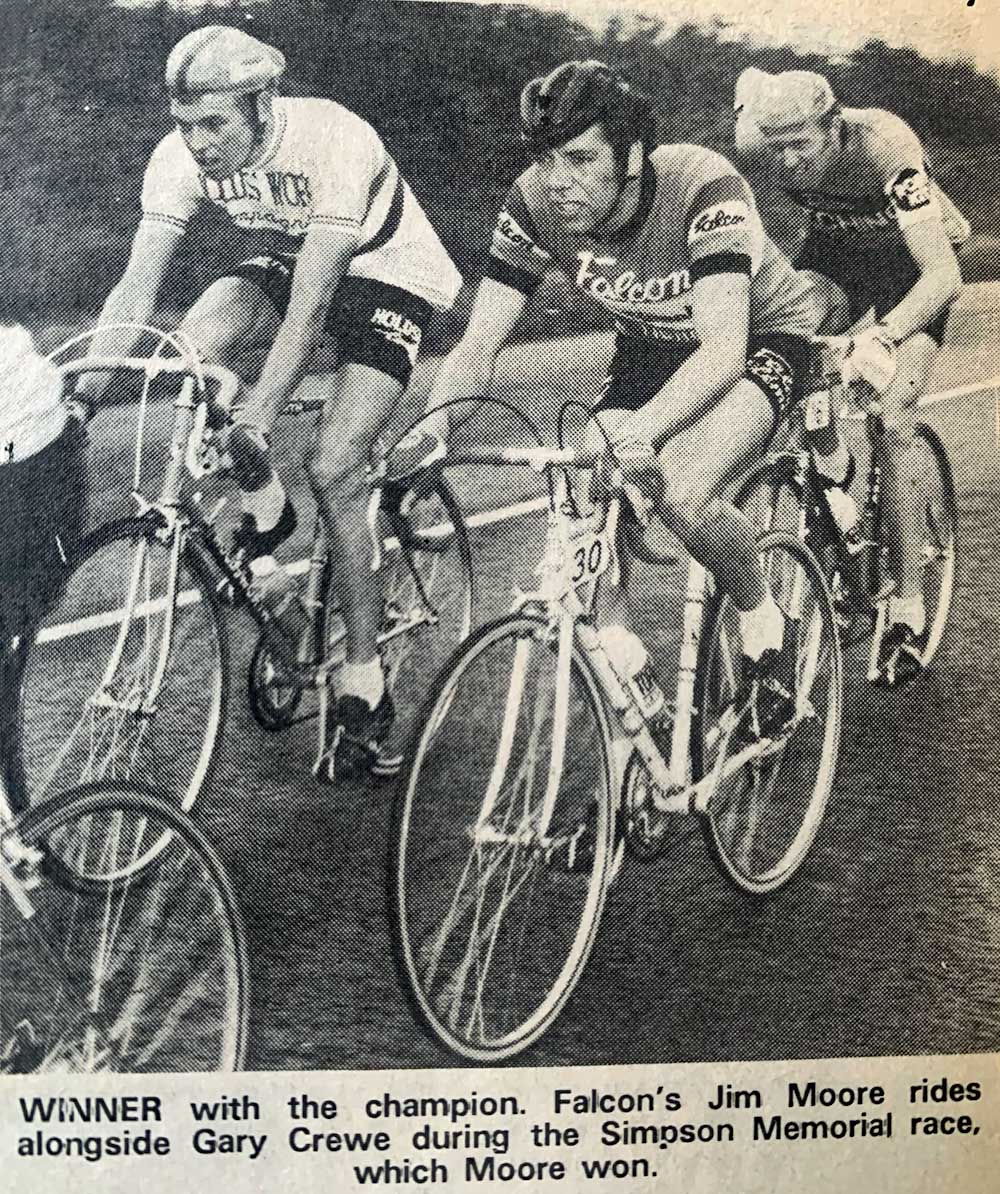 Jim rode the 1968 edition of the Skol Six day with Londoner Tony Gowland – who would go on to win the race in 1972 – Jim taking the place of John Clarey who was in the programme as Gowland’s partner but crashed out before the race started. Jim didn’t finish the six, crashing out on the Friday night but receiving plaudits from legendary journalist, J.B. Wadley who was impressed by Jim’s riding in the presence of six day legends like Post, Sercu, Kemper, Bugdahl and the other ‘vedettes’.

His biggest road success was indeed the 96 miles Tom Simpson Memorial in 1972 where he soloed the last eight miles to hold off the chasers by mere seconds. But a glance at his palmarès demonstrates his versatility; a medallist in the British 5000 metre Professional Pursuit Championship, criterium wins, top 10 in the National Cyclo-cross championship, a proficient rider behind the big motors as well as a talented roadman. 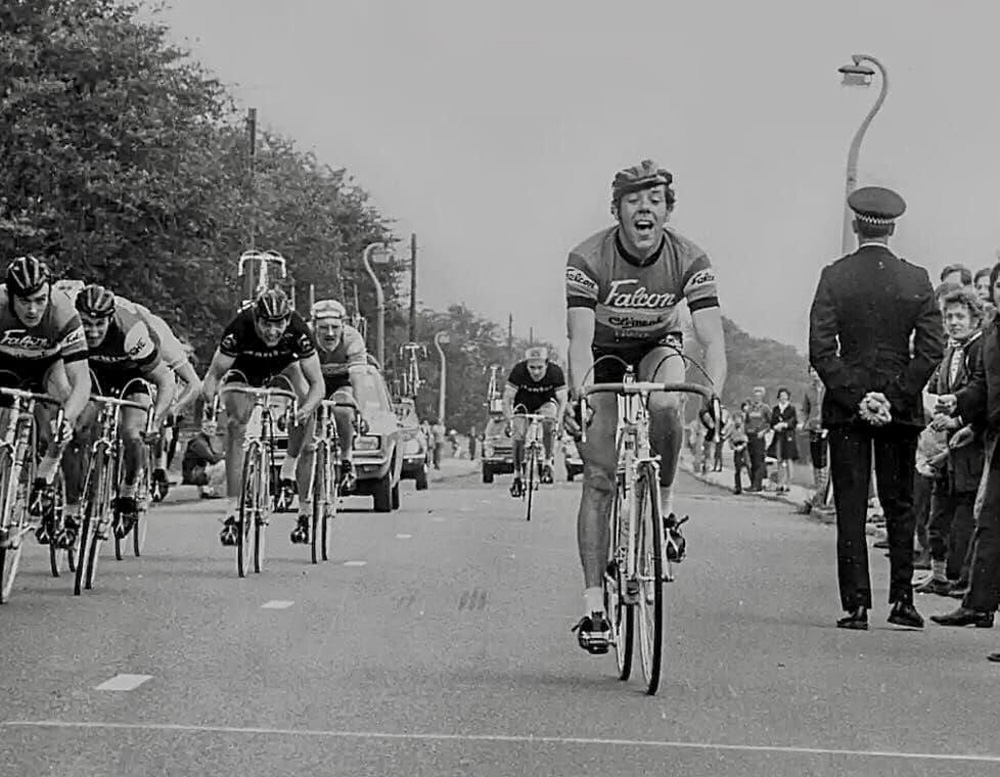 In 1974 Jim and Joan moved to Canada where he continued to race as an amateur. I put it to Joan that it must have been a culture shock to arrive in French Canadian Montreal? “We thought we’d just go for a couple of years then come home. In Montreal there was a lot of French spoken, I didn’t speak French but Jim did, after all is time in Brittany. Jim got offered a job in Vancouver so we packed our things, two kids and our budgie and drove from one side of Canada to the other. We actually spent time in Australia after that but couldn’t settle there and we moved back to Canada. There was a great ex-pat community in Canada, including lots of British and Irish people”

Jim was involved in the 1976 Montreal Olympics, Joan explains; “Jim volunteered to look after the Trinidad and Tobago cycling team, they were lovely guys but unfortunately were all knocked out early in their competitions.” Jim also drove the Commissaries’ Car in the Men’s Road Race.

Jim lived in Deep Cove on Vancouver’s North Shore and was involved in the mountain bike scene from the 1980’s, participating in many races as an amateur, including the annual Cheakamus Challenge a 70 km race from Squamish to Whistler with 2000 meters of climbing. He also continued to race in the local road races, time trials and criteriums and rekindled his track career when the Burnaby Velodrome in Vancouver opened in 1997. In 1998 Jim competed at the Nike World Master Games in Portland Oregon, winning several medals including gold in the Men’s Road Race and silver in the Cross Country Mountain Bike race for 55 to 59 age category. 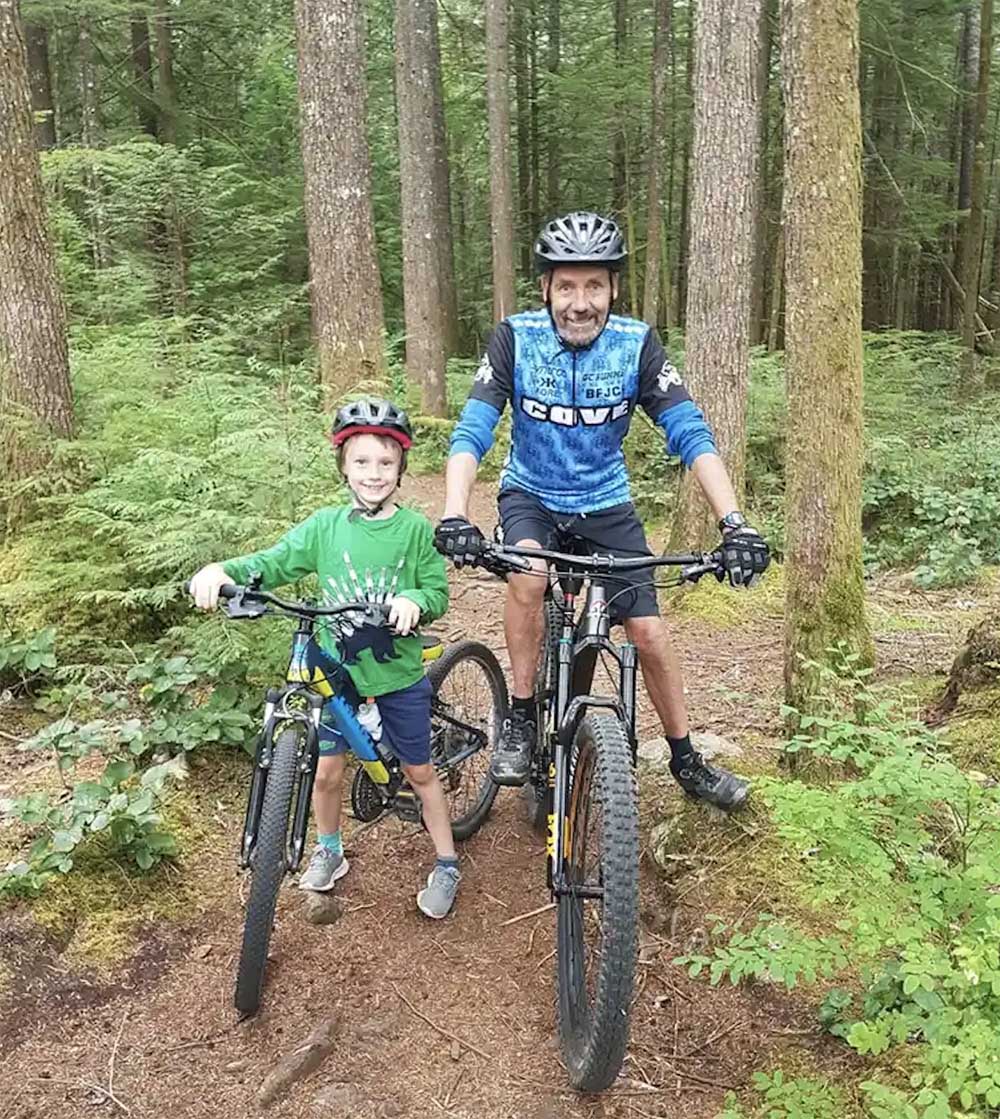 Jim with his grandson Peter

Jim continued to ride his bike until his later days until his illness prevented him from so doing. But it wasn’t just cycling Jim was passionate about, Joan told me; “He took a skiing course and eventually became an instructor at the North Shore Mountains and at Whistler Blackcomb for more than 20 year, he was active with that right up until beyond his 80th year.”

And how does Joan sum up her life with a man constantly on the move on two wheels or skis “There was lots of love and fun involved and we made our marriage work for 53 years, despite the fact that he was a sports person and I wasn’t. We had a great life together in the UK and Canada, we made many lifelong friends through cycling and skiing that we still remain in contact with; and our legacy is our lovely children and grandchildren.” 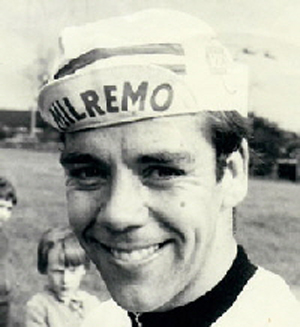 Jim is survived by Joan, daughter Nicole and husband Scott, son Daryl and wife Sophie and their children Peter and the twin brothers Teddy and Leo (The Moore Twins).