The Oxford Dictionary defines “compendium” as “A collection of concise but detailed information about a particular subject, especially in a book or other publication.” Surely “the Brooks Compendium of Cycling Culture” fits this description. This eccentric and entertaining book, conceived as both a love note to cycling and a work of art in and of itself, is perhaps more wide-ranging than concise but considering just how varied the world of the bicycle is this is not surprising. Books really do have a national style and the Compendium is staunchly British in a Monty Python-meets-Savile-Row kind of way. 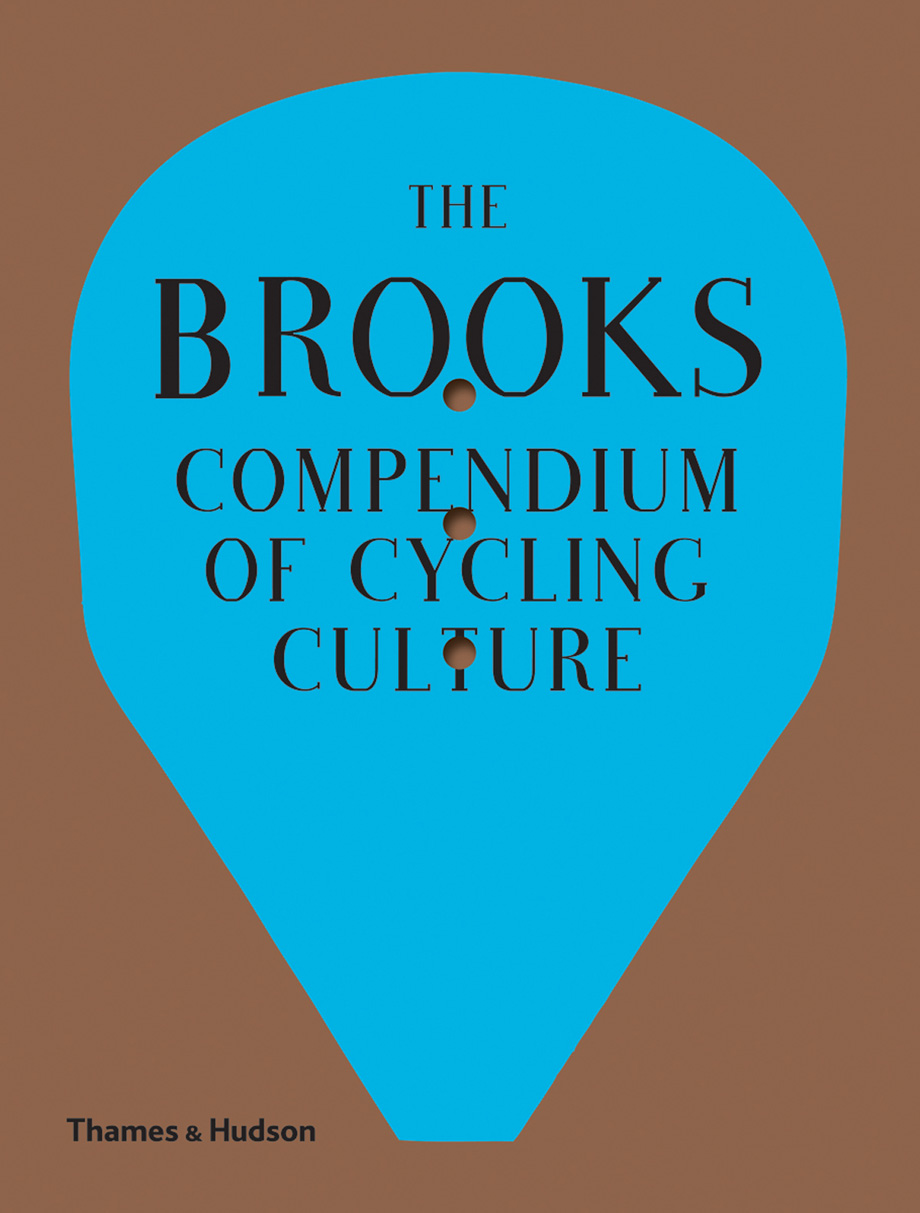 Before even opening this book, one must first savour its design. It is beautiful to hold, with the hardbound linen-like cover feeling just right, a bibliophile’s dream with its thick, creamy pages. The cover itself, in muted brown and blue, is marked by three holes in the centre, representing the three holes found in the classic Brooks leather bicycle saddle, a motif that continues through the endpapers. These featured sepia-toned images, including one of a young(ish) Prince Philip playing bicycle polo. It is not often that we have seen a book that offers on its title page the name of the three Italians (besides an Art Director) who “conceived” this volume whose subtitle is “Rivetting Stories and Curiosities from Cosmopolitan Great Britain.” It is a worthy celebration of the firm’s 150th anniversary. 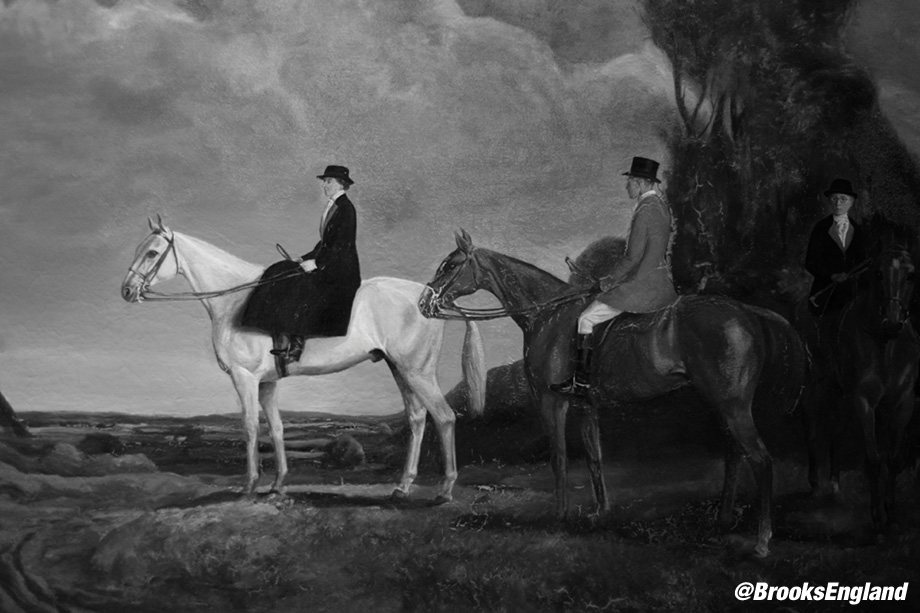 It all began with a different saddle

Even the Preface is interesting Not only does it tell the story of J.B. Brooks and how he came to cycling as substitute for a deceased horse used for his commute to work, then going on to patent a more comfortable saddle in 1882, but it also recounts the story of Dr. Riccardo Bigolin, a young pharmacist who gave up his chance for employment to someone more needy and, after working at his uncle’s felt factory in Rossano Veneto, eventually founded Selle Royal in 1956. Selle Royal, the world’s largest maker of bicycle saddles, purchased the floundering Brooks company in 2002. The idea of the stylish Northern Italians taking over one of the oldest companies in the cycling industry in proletarian Birmingham already intrigues. 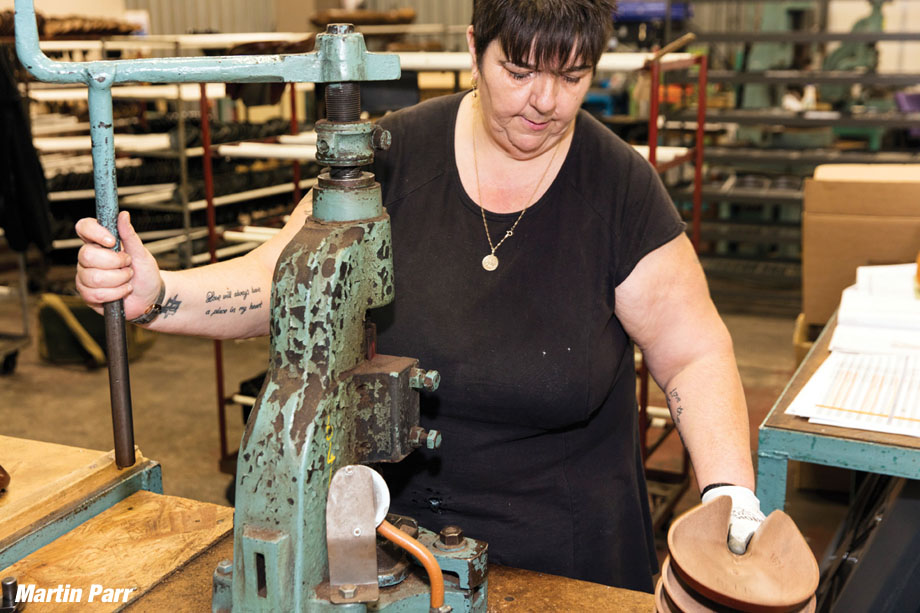 But this book is definitely not an advertisement for Brooks saddles. The opening chapter does recount the story of the dead horse in more detail, although I think if J.B. Brooks did indeed do a daily commute of 30 miles roundtrip on a “boneshaker” in 1878 on hopelessly muddy and gouged roads, he deserves as much recognition for his heroism as for his innovative saddles. And after several more entertaining stories about how London cabbies hate cyclists, racing in Africa, rational dress for women and the origins of the World Naked Bike Ride—whose origins were in Canada!–the next chapter is about innovation rather than about bicycles. 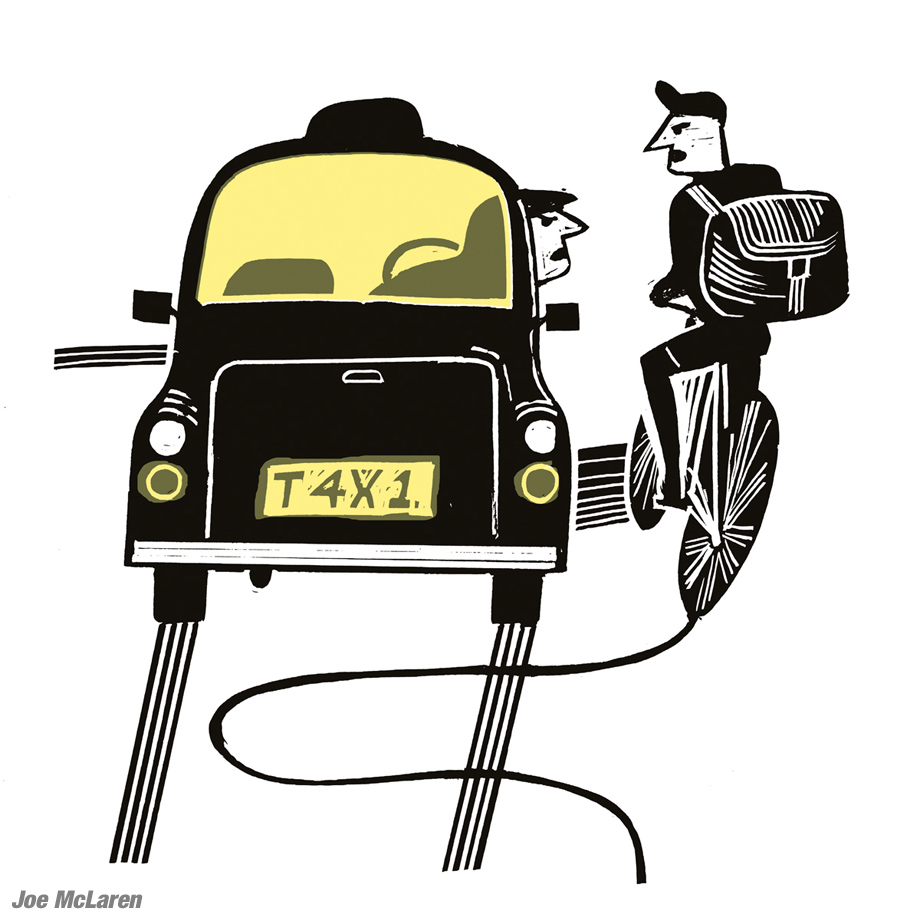 “Great British Ingenuity” by Guy Kesteven is a brief but delicious survey of a number of Great British Inventions, although the author omits to mention that in so many cases the British came up with an idea (like jet engines and television and electric light) and it went to others to perfect and commercialize it. But reading about eccentric inventors tinkering in their backyard workshops and coming up with something marvellous is fun. An oft repeated tales is that of Yorkshire squire Sir George Cayley, and his gliding experiments for which he volunteered his coachman as pilot, the latter terminating his employment as soon as he was back on the ground. Many familiar inventions are here—the steam locomotive, the chronometer, canned food, the hovercraft—along with some surprises, such as the lawn mower, the thermos flask, the chocolate bar, and the toothbrush (this last having been developed in prison). And British contributions to bicycling innovation have been major: not only the Brooks saddle in 1878 (with the famous B17 a decade later), but also the pneumatic tire (1847!), the bush roller chain (1880) and the modern bicycle itself in 1885 with the Rover Safety Bicycle. And Sir George Cayley also came up with the idea of the tension-spoked wheel already in 1808. And of course where would pro cycling be (cough, cough) without that useful hypodermic syringe, invented in 1851? 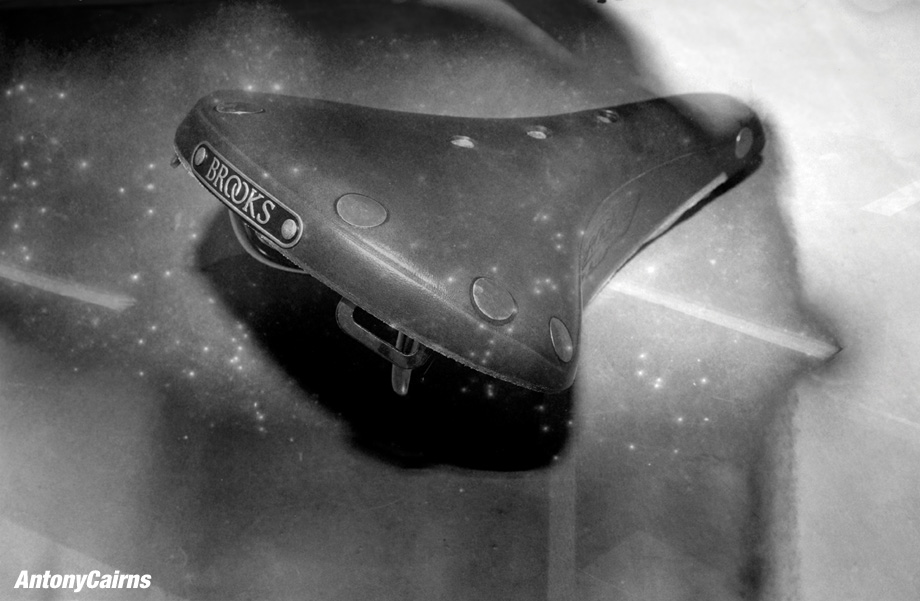 The following chapter, “Made in Britain,” purports to explain “the magical allure of Britishness and why people from around the world love British-made things” and is a series of interviews with creative people—a Savile Row tailor, a female bicycle framebuilder, an advertising photographer, the founder of the Rapha clothing line, the head of Brompton Bicycles and wannabe racer and menswear titan Sir Paul Smith, whose cycling scrapbook was recently reviewed here. Simon Mottram of Rapha is perhaps the most accurate when saying that the British are probably better at design than manufacturing; while it is true that Bromptons are brazed up in the UK, most Rapha gear comes from the Far East and Smith’s clothing is predominantly made in Italy. The other interviewees are creative types who do not manufacture anything on a significant scale. One needs only to look at the story of Raleigh, once the biggest bicycle company in the world, or the British motorcar industry (engineered now by Germans) to discern that “British-made things” have had a rocky past. The chapter of photographs of the Brooks works, “Born in Brum,” suggest nothing much has changed there since 1878 and it is ironic that a book that celebrates British innovation and leading-edge design comes from a company whose top product, the B17, has been the same for 130 years. 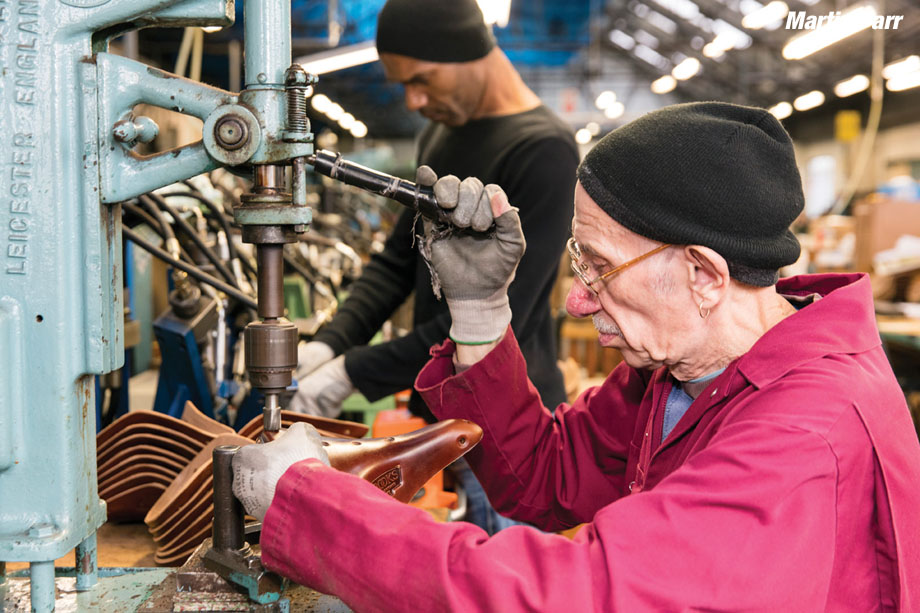 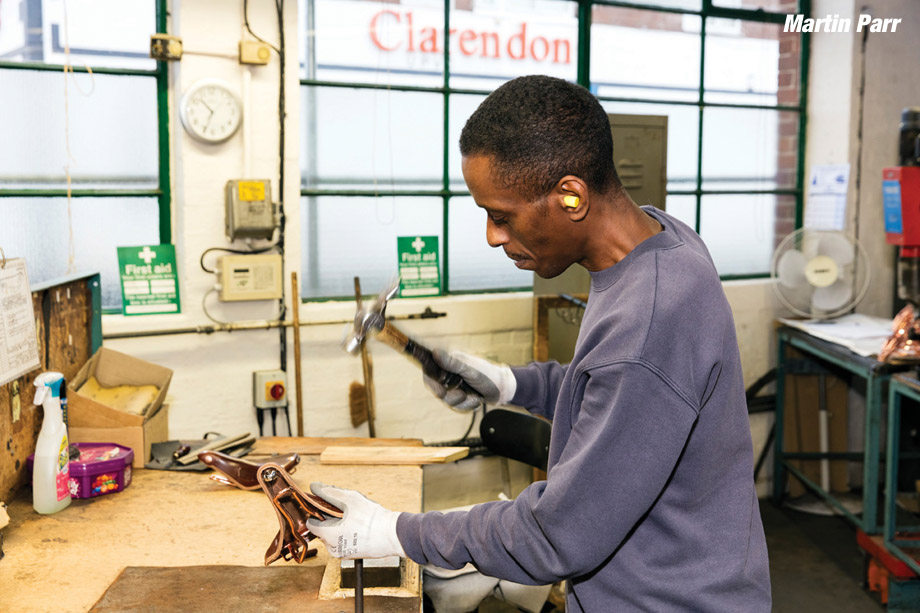 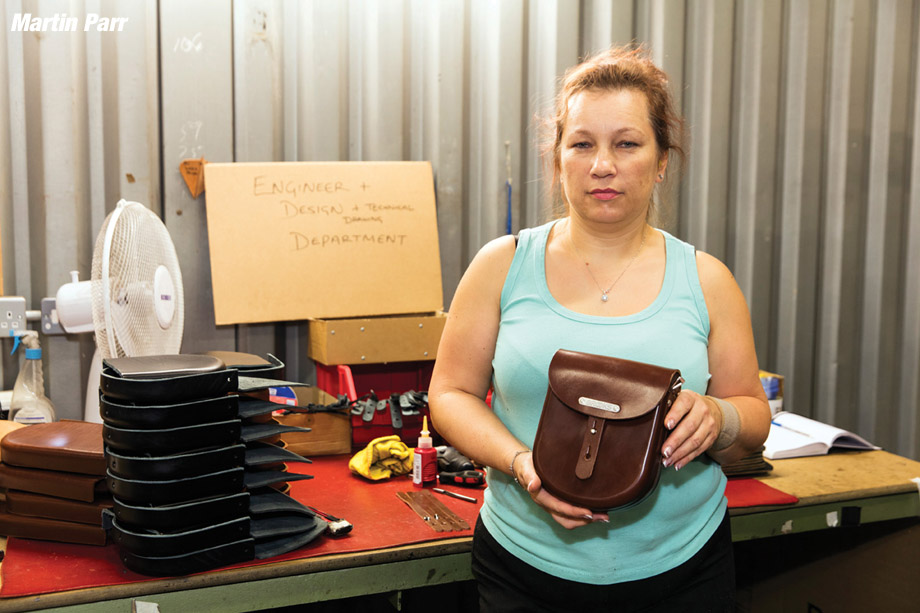 No matter. We get an odd chapter about artworks made with bicycle parts, albeit by famous artists, and musings on the European racing scene, along with some comments about the weird lack of development of racing in Britain for so many years. Contributors here include not only the well-known writer Guy Andrews but also retired pro David Millar, whose presence, it appears, is necessary for every book related to cycling being published in the UK.

Jack Thurston, known for his “the Bike Show” podcast, contributes a very charming chapter, “Pilgrims and Pioneers,” providing tales of long-distance bicycle tourists. Eccentric—and mostly British—these people are worlds away from pro racers in every sense. It is good to see reference to the Crane cousins, whose ambitious cycling adventures were the stuff of several hilarious books in the 1980s. “I say, Old Bean, shall we ride from Bangladesh over the Himalayas to a spot somewhere in the Taklamakan Desert? On lightweight Raleigh racing bicycles? And we can saw down our toothbrushes (See British inventions, above) to save even more weight.” This is not an exaggeration. 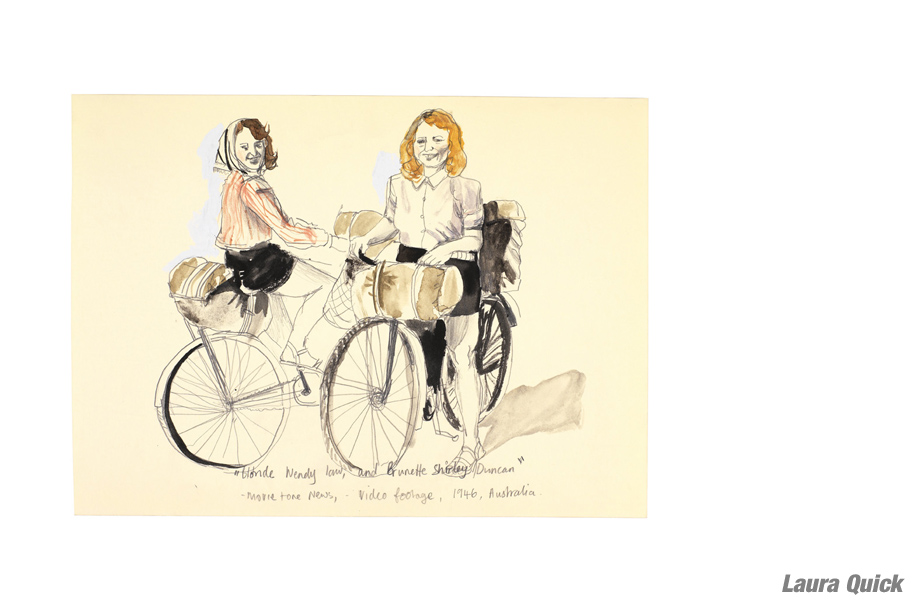 This cabinet of curiosities concludes with some very good cycling photos (including a classic by Robert Capa) and then a few pages of aphorisms about the future of the bicycle. Perhaps appropriate to a book from Brooks, everyone thinks the bicycle will still be around pretty much forever. How better than to conclude with these words from Paul Hawkins? “While there is still space for cycles, there will be cyclists. When the space becomes less, there will be cyclists. When all other forms of transport cease, there will still be cyclists.” And, I suppose, timeless Brooks saddles. 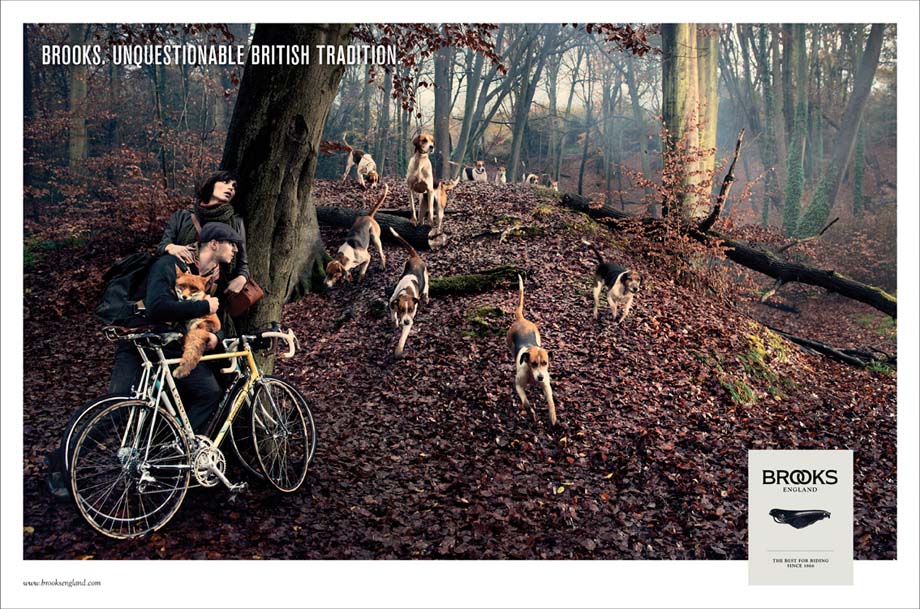 • BUY The Brooks Compendium of Cycling Culture at AMAZON.COM. 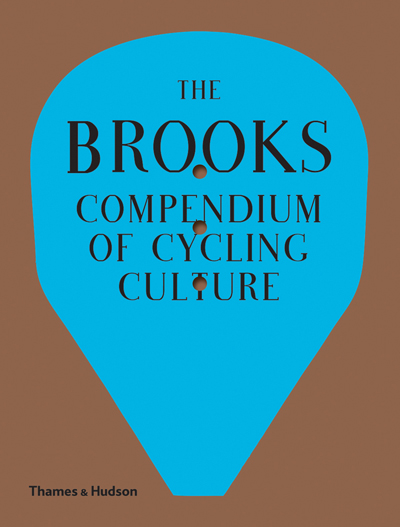 When not pining for a genuine Brooks leather trouser clip, Leslie Reissner may be found enjoying a proper cup of tea, using his automatic steam kettle (invented in Britain in 1955), at www.tindonkey.com.