Roadside St. 4: We’re back on the road after another epic day – the sun is long gone and we’re driving south from Fresno enroute to the stage 5 finish in Paso Robles. It’ll take a couple hours to get there, which should be just enough time to recapture today’s … essence, and recount an awesome day that began with a classically Buttheaded move…

The plan was – as usual – simple. I know – those seem like famous last words by now, and as usual, the day became a whole lot more than I bargained for – right up to bumping into Levi in the hotel hallway on my way out and finally meeting in person. 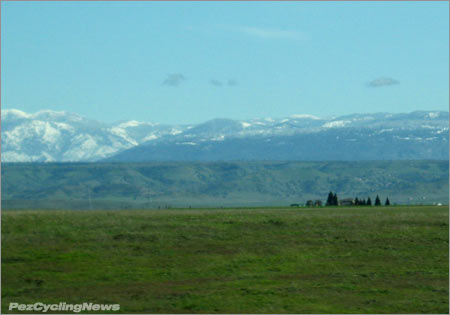 Drop Point: somewhere in them hills.

By now a lot of you know the day dawned with pouring sunshine – nary a cloud in sight… and a more complete turn from the past few days of rain could not have been better received. Conditions were ideal for my planned ride from the sprint points town of Oakhurst to the stage finish in Clovis. The guide said it was 50ish miles, with a 5 mile climb that gained 1500 feet to start things off followed by a mostly downhill & flat run across the Sierra Nevada foothills to Clovis. 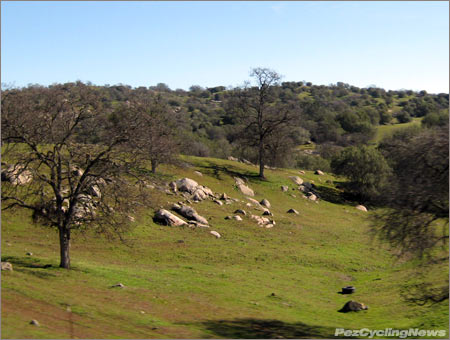 … This is gonna be some nice ridin’.

Having been unable to fanagle a ride group (or even partner), I was going solo – mano a mano if you will. Which under normal conditions is no biggie for 50 miles, but the legs did doth protest (albeit mildly) after yesterday’s heavy gear grunt over Sierra Road. But the sun was shining, and I was not about to lose the chance to enjoy LOOK’s 566 for another day, so it was game on.

Ready to rock… and note that manly gearing choice….

11:00 AM
Turn Left At Albequrque
After my drop off in Oakhurst the ride started as expected – a reasonable but not hard climb to the day’s final KOM point. The ride started at around 2000 feet and the sign said twisting roads for 18 miles. 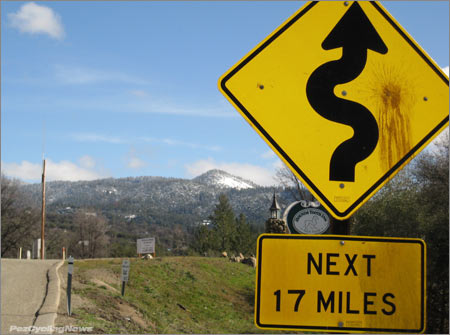 Hmm – that’s a lot longer than the climb is supposed to be, but I guess they mean it twists down the other side too. No problemo, let’s keep going. Even the cars coming down the pass covered in snow didn’t phase me… although I admit the guy removing tire chains was a tad disconcerting. 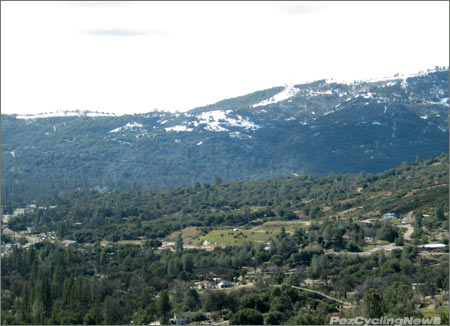 Here’s a nice view of where I should have been.

11:35
When one of them told me it was still 12 miles to the summit… well that’s when I pulled over for a map check. Any geography buffs or map geeks out there might know that it’s 18 miles form Oakville to the summit in Yosemite National Park- along route 41.

11:50
After a good 35 minutes of climbing, I spent the next 15 cursing myself as I descended back to Point A in Oakville to start again – this time on the actual race course. 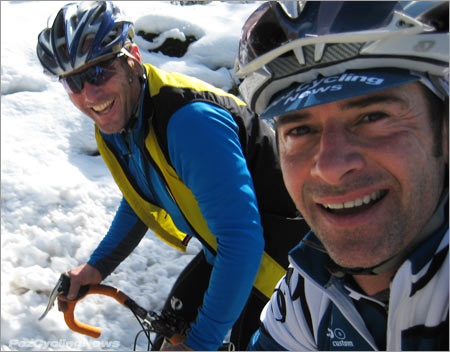 Thanks for the tow, Phil!

KOM Climb: Crane Valley Road
The real climb was much easier than the previous hour, and pretty much what I expected from the guidebook. Another 35 minutes, at a bit slower pace, and I was over the top. Along the way I hooked of with Phil from Sedona, who’d already been up the pass twice today. He was a big boy, but had the power and pretty much towed me to the top. Thanks Phil! 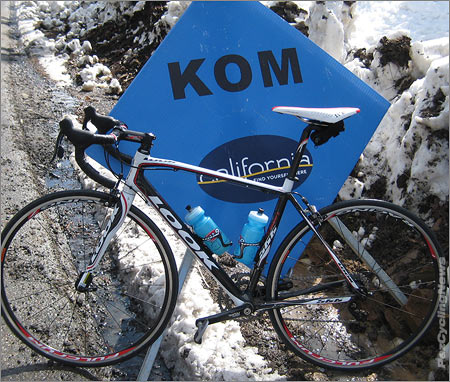 12:25
Up top it was time for the photo opp – proof that I passed this way, and a good chance to talk to a few PEZ-Fans. As the rest of the PEZ-Crew will attest, it’s pretty cool when a fan steps out and says hello. And proof of ToC’s growing popularity was more fans from Arizona to compliment the indigenous cast of local tifosi. I was advised by guys who know the roads that after a couple more small rises, the rest of the 40 miles was pretty much downhill and pretty easy. Sounds good to me! 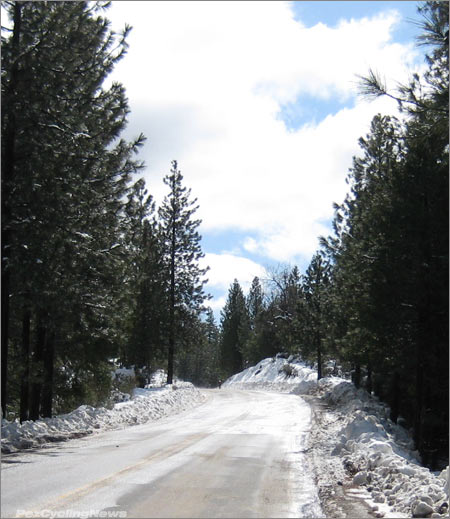 The roads of the descent were freshly plowed and even steaming in places. I spied a lone rider ahead who looked like a good companion for my solo effort. I’m sure I would have caught him too – if it wasn’t for these guys…..

The roads weren’t packed with fans, but there were definite pockets – many local clubs had staked out their fave spots to see the race. And with its 11AM start, I was only about 2 hours ahead, and still had some (ie: a lot) miles to go before I was done.

First up were the cowbell ringers – these guys and girls seemed to have been here for some time, and had already established solid roadside buzz. 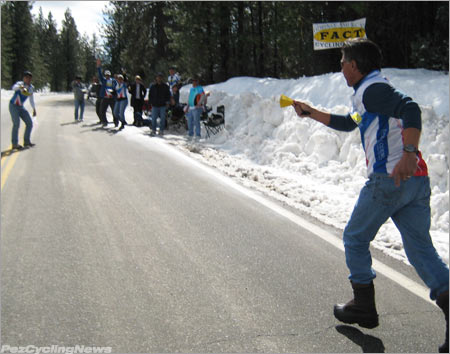 Somewhere just past the KOM, this crew was living the ‘more cowbell’ dream – clanking off for your’s truly. 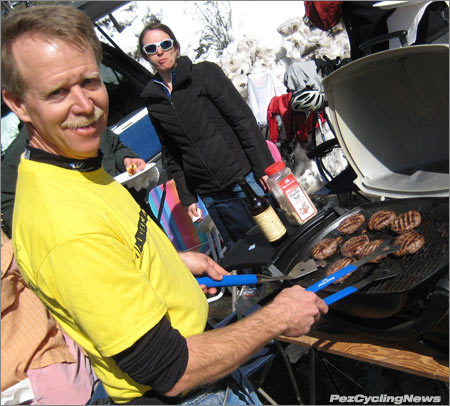 The savory aroma of grilling beef just drew me to a halt. These Fresno locals had exactly the right idea – and here’s where that first wrong turn cost me dearly – leaving no time to enjoy their generous offer of a burger. 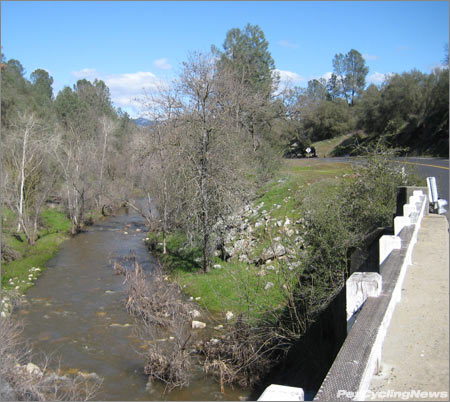 After a chilly 10 mile descent, it was time for a pause to take in the beautiful countryside. Not a car, person, or bike in sight. 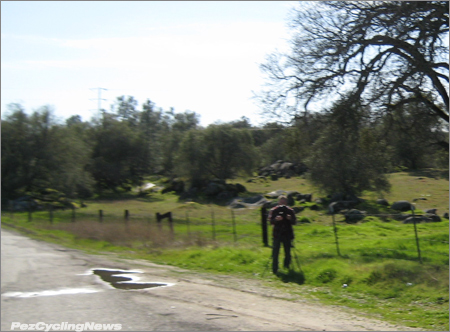 Even in the relative remoteness of these roads, I was never far from another fan setting up to capture the 2-hours-away peloton for posterity. 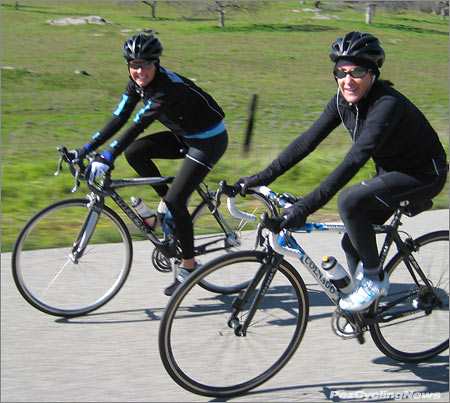 I spotted Kelly & Robin, (SoCal natives taking in a few stages by day and enjoying the regional wines by night) a few miles further down the valley, stopped and shaking out the cold. We generally agreed that inspite of the gorgeous day, the pedaling was currently somewhat laborious. Their company was a welcome break from my solitude, and we rode the rest of the stage more or less together. While I would ride ahead and then stop for pics, they always caught up and just kept on rolling. 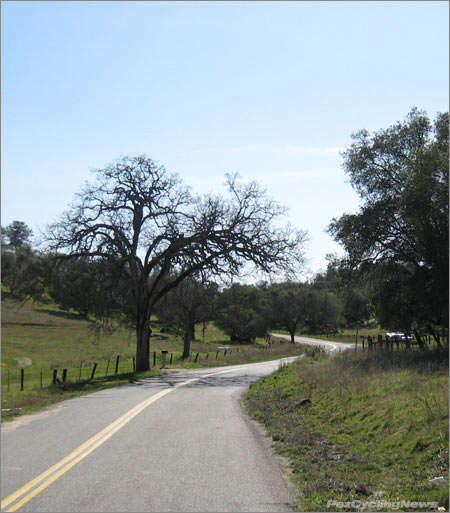 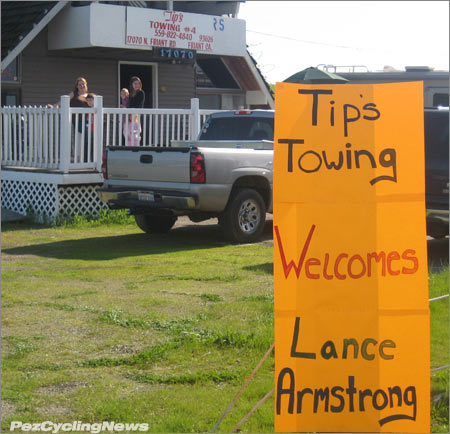 Here’s just one example of the many roadside signs posted by fans, it seems everyone is glad to see Lance back in action. 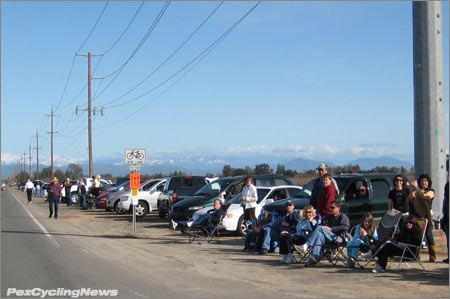 The crowds grew noticeably larger within the last 20km, and they never failed to offer cheers of encouragement as I ground out those last – long kms. 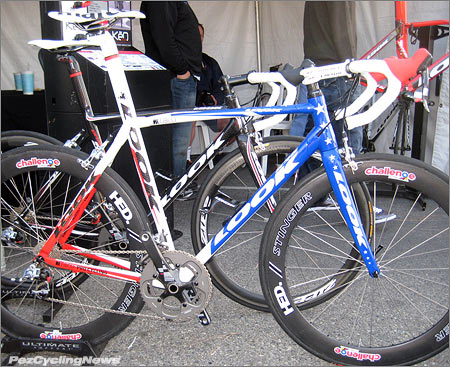 Safely back at the expo, I dropped off my 566 and had a few minutes to admire LOOK’s very cool Stars and Stripes 595. No plans for production yet – but just like last year’s Mondrian retro 586, if enough of you ask your local LOOK dealer – I’m pretty sure they’ll build some… 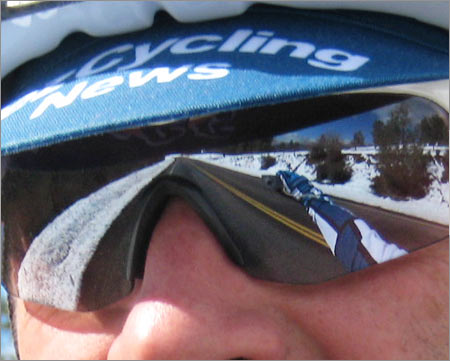 I finally made it to Clovis some 4 hours after I’d started. That was a long day. But a good day for sure – great weather, gorgeous countryside, encouraging race fans and some welcomed riding partners. For me, every joint is sore, and having done a normal week’s miles in 2 days, I’ll be taking a rest on Thursday – but I’ll be back with more tales from Solvang tomorrow – so keep it dialed to Pez and thanks for reading.
– Pez 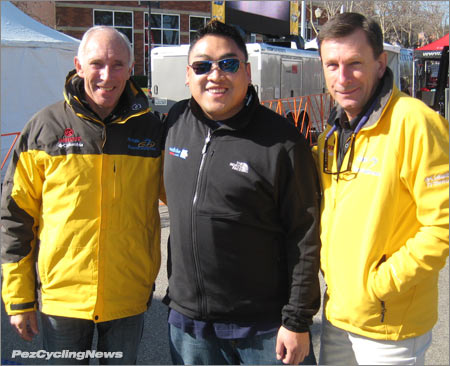 This morning (Stage 5) I bumped into these characters at the expo set up. The guy in the middle may be more recognizeable by his online presence than his face – but a lot you already know Thien from RoadBikeReview.com – check em out if you haven’t already.