Roadside St. 6: It’s 10:30 Friday night, I’ve been up since 5:30, and in between were some of the most action packed hours I’ve seen on Tour. Weeks ago I called shotgun for Gustav Larson’s TT ride, and I watched the Team SaxoBank rider lay down his podium ride right before my eyes…

The day officially started at 7:15 when I rolled out of the hotel into some very crisp morning air, off to meet Robert Panzera of Cycling Camps San Diego for a morning ride. The sun was just up, and by 8:00 we were at the famous Bulldog Cafй, already abuzz with riders and fans lined up for coffee. 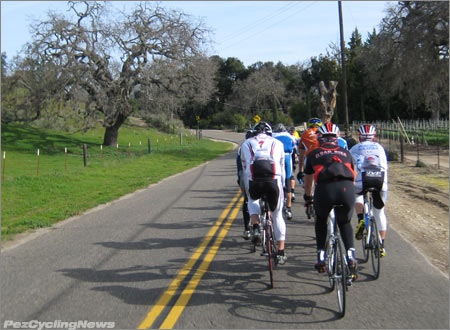 It soon turned into a who’s who of the cycling industry’s marketing folks – with guys from Giant, Specialized, Scott Coady of Tour Baby notoriety, some pros, and a whole lot more people arriving for a ride hosted by the guys at Road Bike Action magazine. 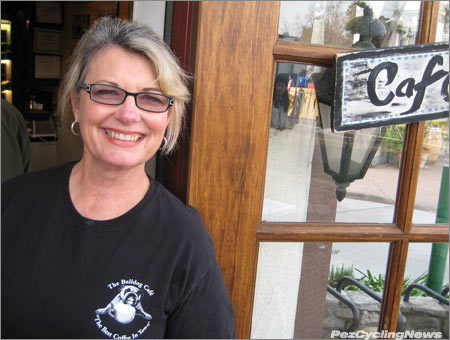 Barbara is the fine lady who’s Bulldog cafй serves fine coffee to pretty much everyone in Solvang.

The ride eventually rolled out around 9:00, and I guessed over 60 of us headed off into the hills around Solvang. It was a great ride – but like these things can tend to- this one also ramped up to a high speed hammerfest. I was holding my own, but working hard – until SRAM’s Michael Zellman laid down some wicked tempo on the way back, which caused a split in the group on a small rise. As I was right behind said split- I took this as my cue to attack – straight out the back…

It was at this point that (as Paul Sherwen would say) I ‘lost the plot’ – and slowed to enjoy the final kms at a more reasonable pace. 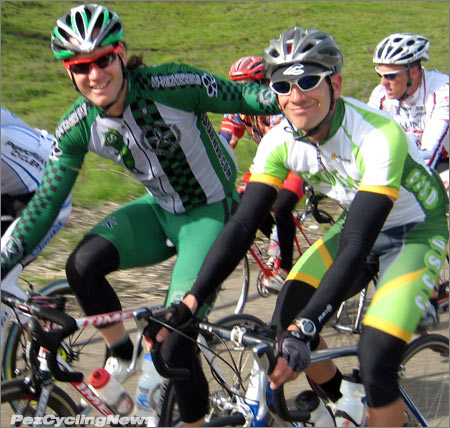 PEZ-Fan Mark-Paul Gosselaar and Robert Panzera of Cycling Camp San Diego spent their share of time on the front.

Come race time, I was looking for my traditional place in the team car of one of the riders. In the past two years, my guy have always finished top 10 – Ben-Jacques Maynes in ’07, and Tom Zirbel in ’08 – what would happen today? 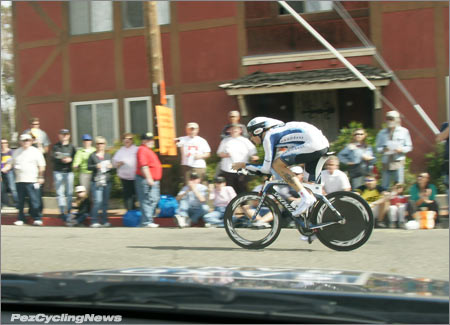 I knew a seat in the team car of one of the gc big boys was out of the question, so my strategy was to source out who the real fast guys were just off the main radar. When I heard that Gustav Larson was riding here, he was my man. 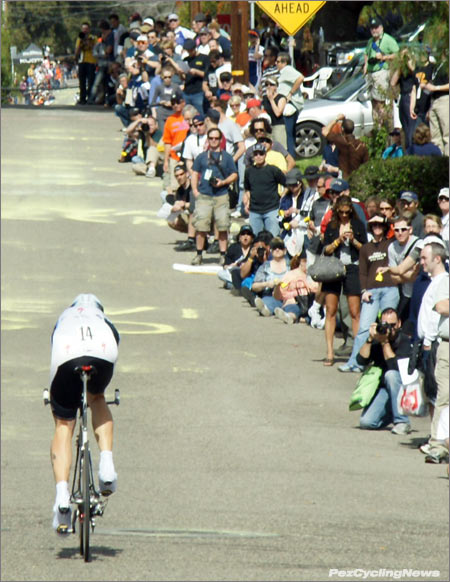 The course heads up a steep hill just meters after the start, and the crowds were the biggest I’ve seen in 3 years.

Specialized’s pr honch Nic had offered to do what he could to secure me a seat, but we both know these things are tricky business, as a lot of teams will host vips and others on different days, and they get the seats – so no guarantees were made.

At 1:10PM I was walking the line of support cards waiting to chase their riders, and I noticed the Saxo car had an empty front passenger seat. I quickly introduced myself and was told they were waiting for a journalist to show up – and when they mentioned they were following Gustav – it was bingo – that’s my seat! 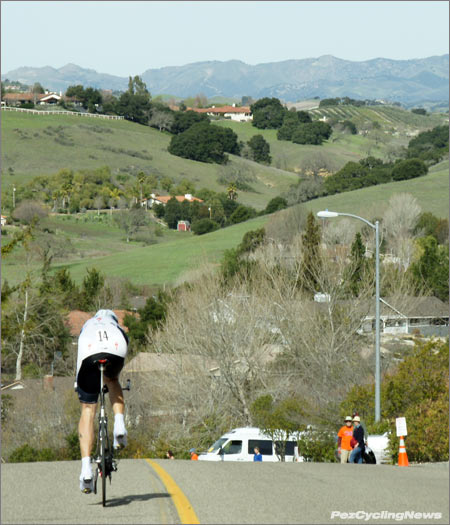 There’s no wonder why the area is popular with cyclists…

I hopped in and intro myself – and discovered my drover for the next half hour would be none other than Bradley McGee! How cool is that? Just another example of how quickly plans can pan out on a race like this.

Here’s how his race looked from my seat… 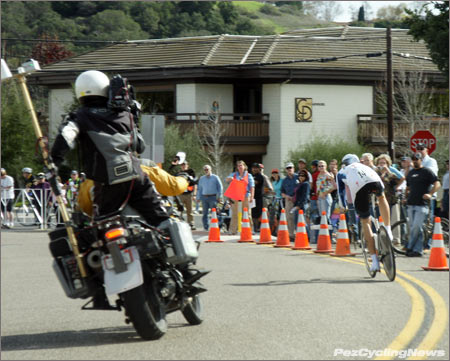 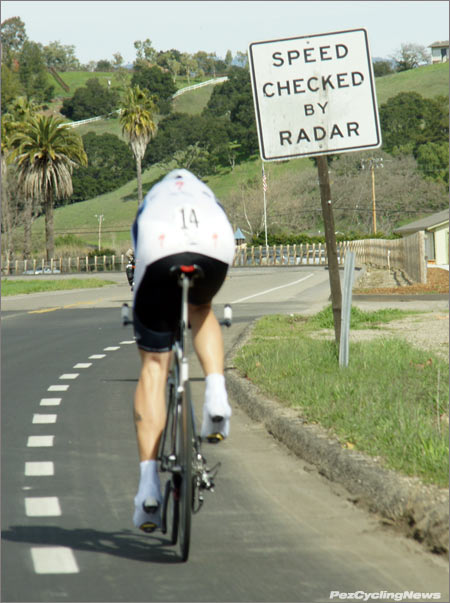 Onto the flats a few kms out of town, and Gustav settled into a steady 48khp. 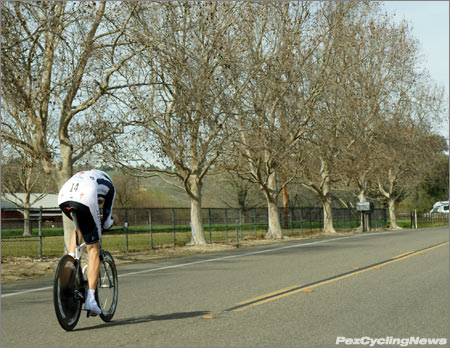 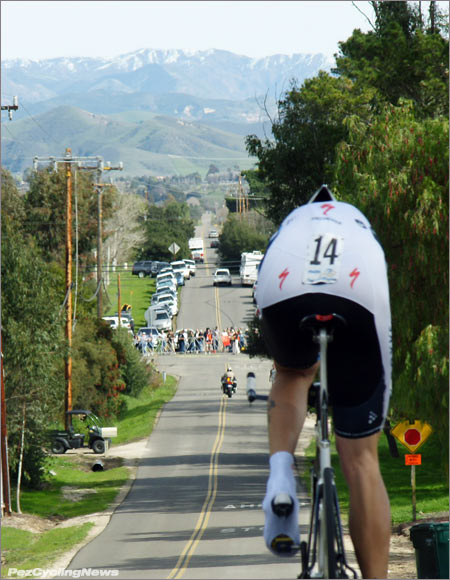 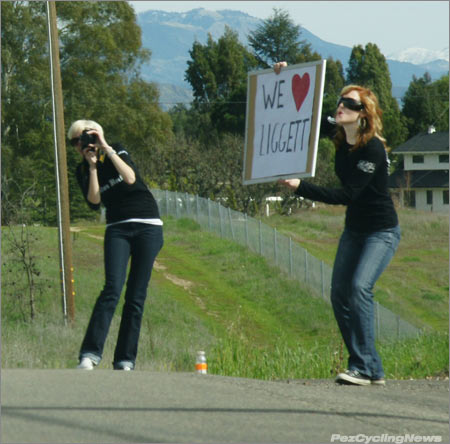 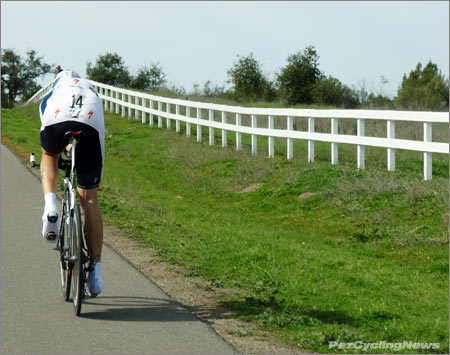 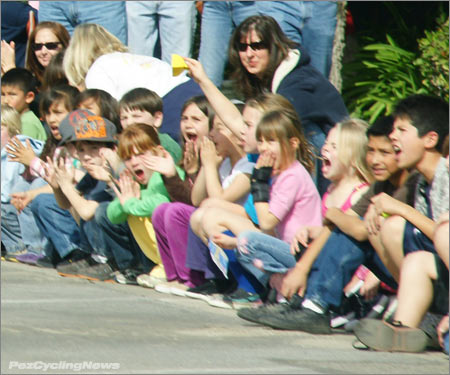 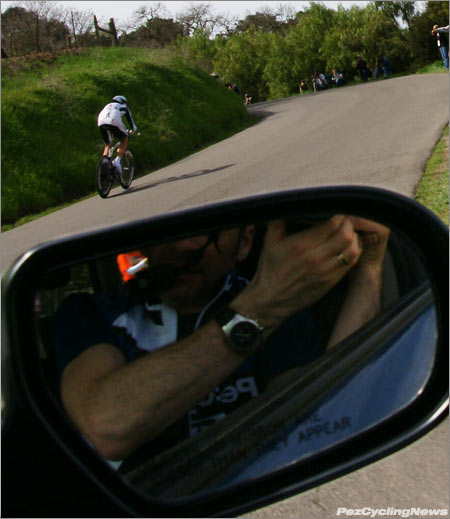 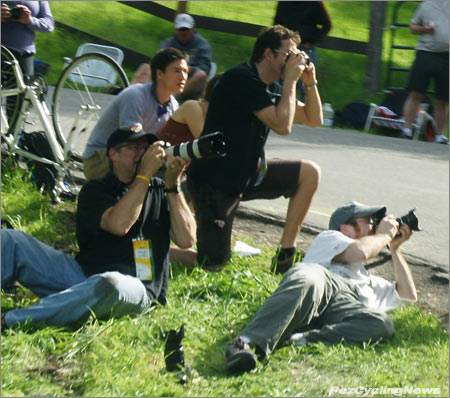 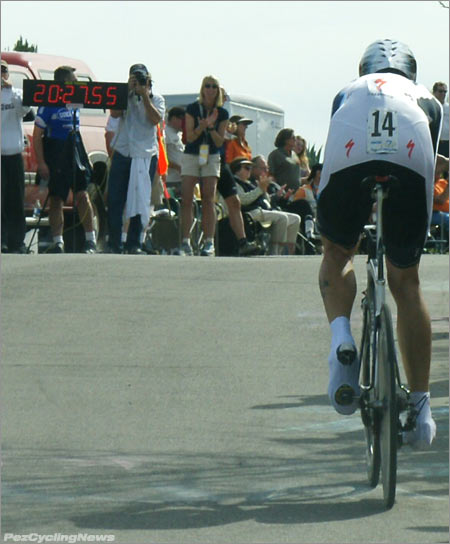 At the split atop the KOM, Gustav set the new fastest time – and Mr. McGee liked it! 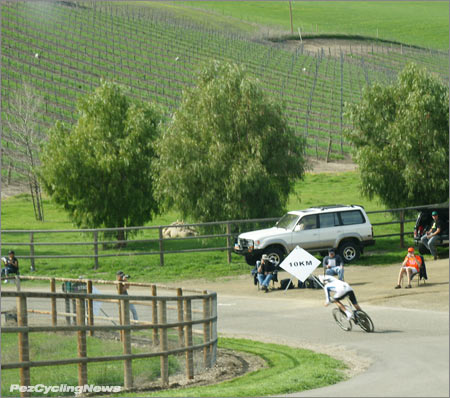 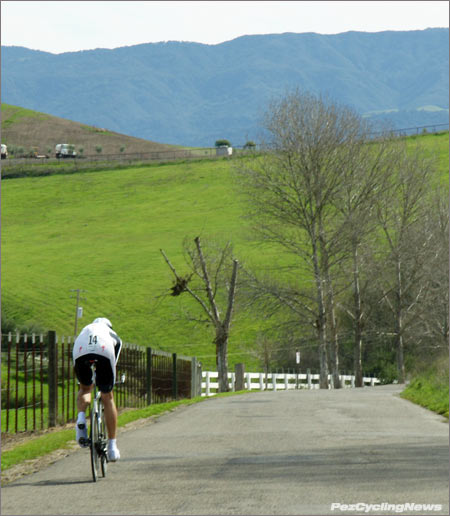 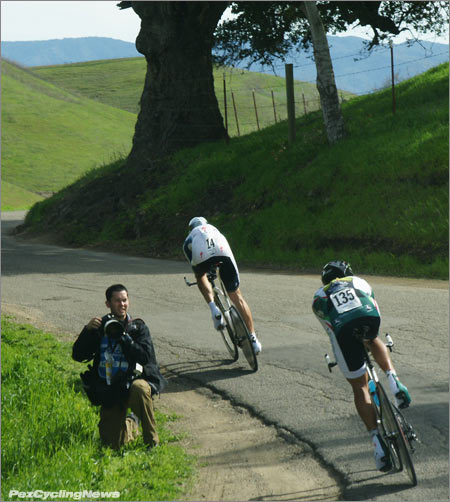 Not far past the 10km to go, Gustav caught Colavita’s Luis Romero – the one minute man. 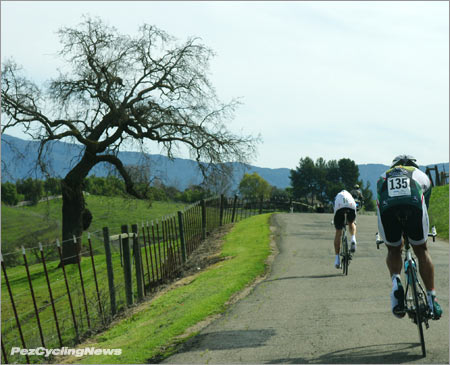 Romero got inspired with someone to chase – and picked up his pace to match Larson. 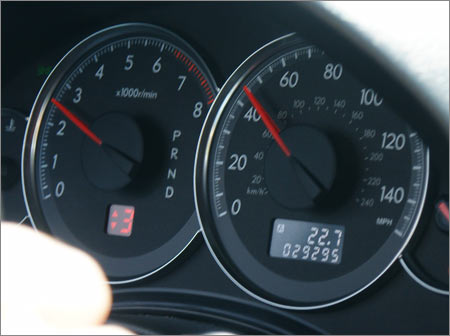 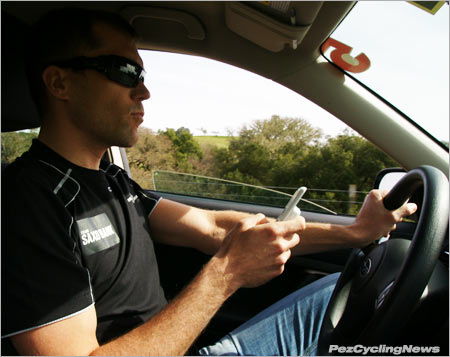 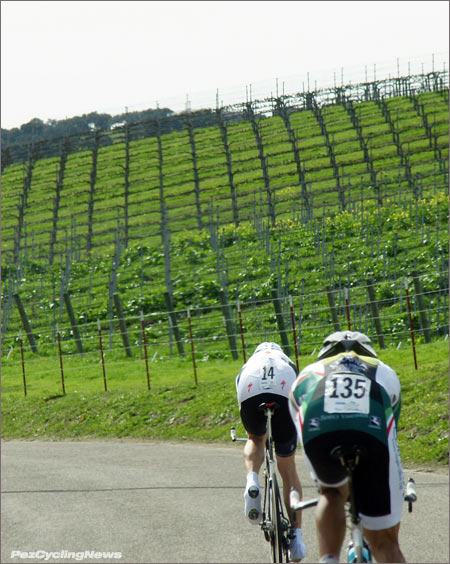 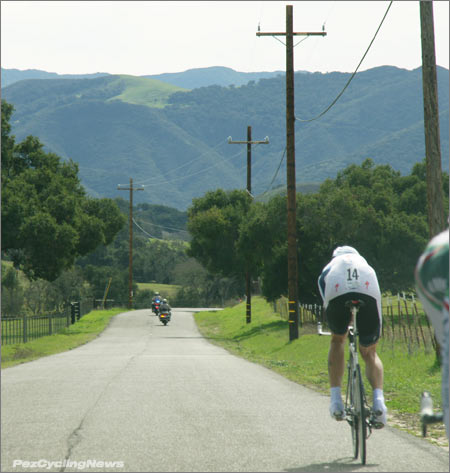 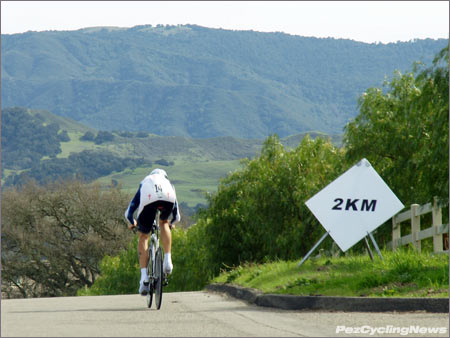 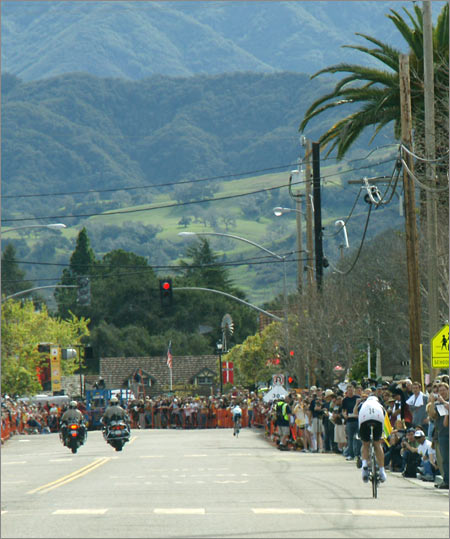 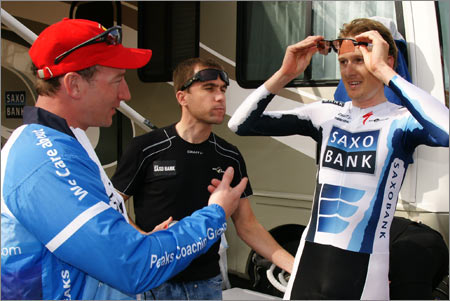 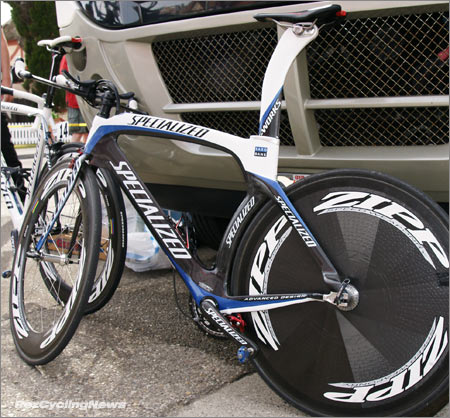 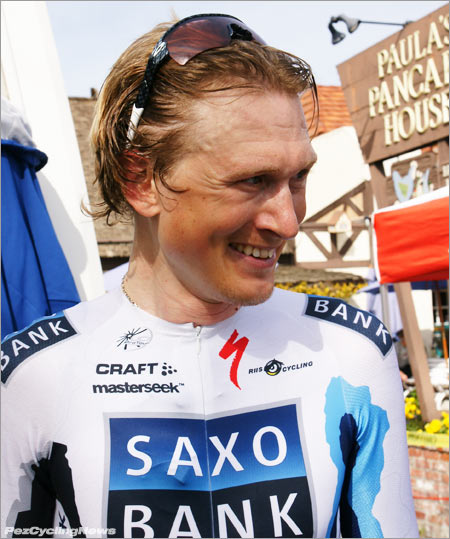 Gustav was pretty pleased with his run – but we still had to wait for Levi, Lance and co. to come in. Gustav was race leader, but in the end finished 3rd at 17” behind Levi and Dave Zabriskie- not too shabby for a guy whose best form is yet to come.
Keep you eye on Gustav he’s gonna win some big stuff in the coming years.

Another awesome day – and now I’m in Santa Clarita, off to bed before tomorrow’s big ride on the stage ride to Pasadena – that’s gonna be good – .