Roadside St. 7: With three days of riding on the stage routes already under my belt, I’d planned stage 7 as my “queen” stage. I’d scored an invite to join the Amgen-Giant Masters Charity Challenge, riding from Santa Clarita to Pasadena.

The event was part of the team’s efforts to benefit Breakaway From Cancer, and included fund raising by team members and ride participants, plus raising awareness for the cause. 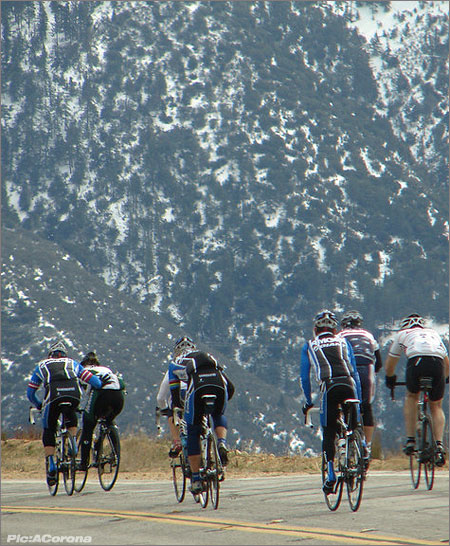 After what was already my biggest mileage week of the year, today I was plunging into uncharted territory as the stage route would climb to the Millcreek Simmit at about 4800 feet altitude on a 38 mile (almost 60km!) slog from our start point of 1200ft in Santa Clarita.

I was keen to ride the stage, but after my 4 hours into the wind on stage 4, I was downright relieved when PEZ-Pal Mark-Paul Gosselaar came through with the hook-up to this fully supported ride. 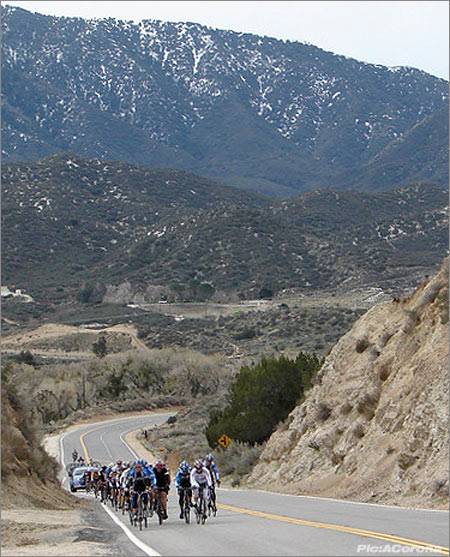 The group made me feel right at home from the moment I walked into the large breakfast ballroom at the Santa Clarita Hyatt, where many of the teams were staying. No matter how long I’m around this sport, I never get tired of seeing guys like George Hincapie and Tom Boonen starting their day with the toast and coffee like the rest of us. 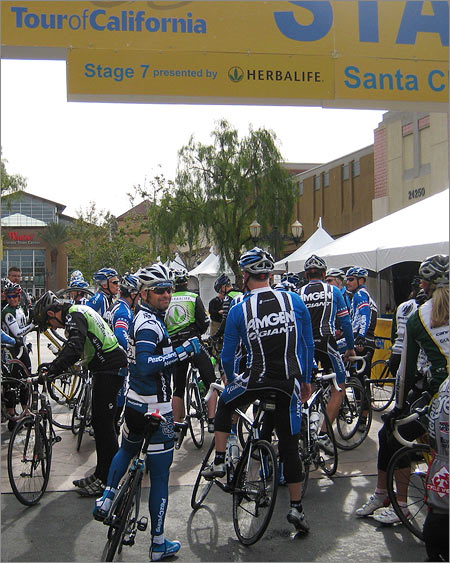 Shimano was on hand with a two man support crew, who gave my LOOK 566 a quick once over, and as the sun peaked over the local mountains, about 40 riders lined up under the start banner to begin the 4 hours of pedaling ahead. 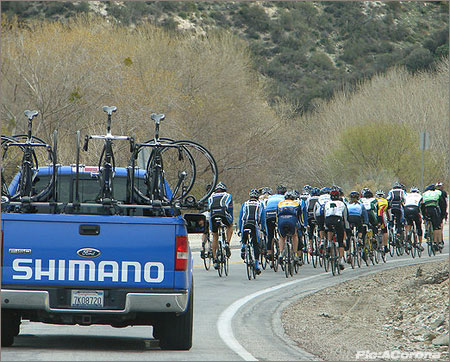 The day was noticeably warmer than any others this week, and as with the early kms of many groups rides, the early pace was …’brisk’… No wonder as I in the company of cycling greatness – riding alongside multi-time world and national level champs like Thurlow Rogers, Wayne Stetina, Richard Meeker, Steve Strickler (and a bunch more from the powerhouse Amgen-Giant Masters team). I knew these guys could turn the screw at any moment, so I was not complaining when the pace finally calmed after the day’s first climb at the short but steep Sand Canyon Road at mile 8. 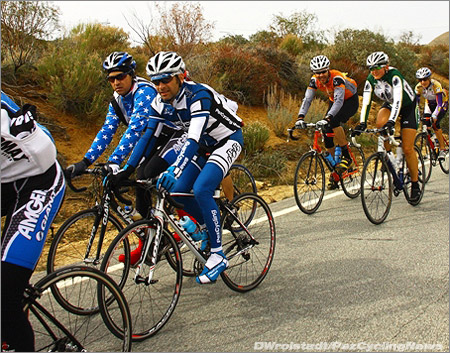 I’d only glanced at the stage profile, but was warned by Mark-Paul that the ride to the climb ‘proper’ was a long uphill slog. …Good thing I never did the metric conversion, as I’m sure I’d have turned around rather than face the prospect of a 60km uphill right from the start. 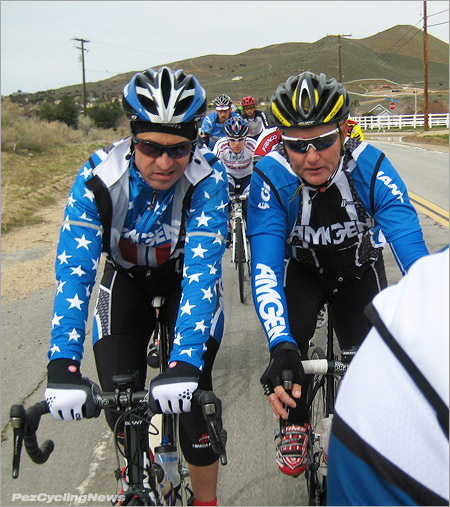 Funny story: That guy on the left is Richard Meeker – turns out his best girl is Kelly – who I met and rode with back on stage 4.

I’d stopped for a quick break on a small rise about 7 miles in, and quickly lost contact with the group. I soloed on to Sand Canyon and made up a little ground, but not enough, and was glad to see Thurlow Rogers clipping back in at the top of the climb. He gave me quick nod and I was right on his wheel as he hammered it in top gear down the other side to regain the group. 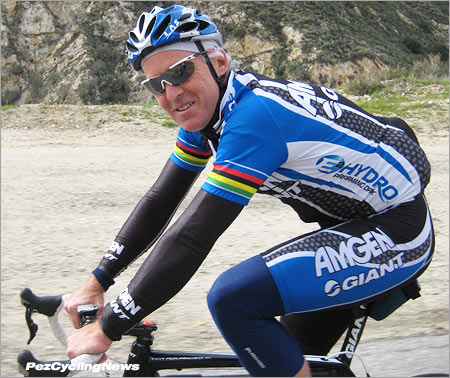 We hit the flats and his pace didn’t slow as we overtook a couple of cars. Now, I’m not normally the type of guy who passes vehicular traffic on my bicycle, but I needed his wheel and that was that. Soon enough he dropped me back into the bunch, where I swore off nature breaks for the remainder of the day. 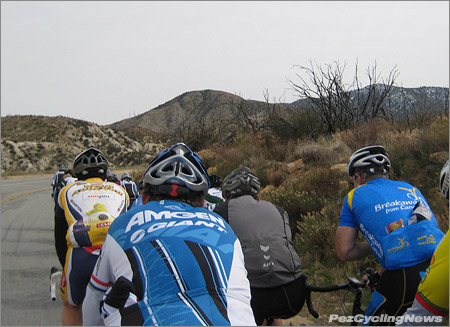 The first 25 miles were on fairly non-descript roads to the day’s first sprint point at Acton, where we’d unnoticeably gained almost 1600 feet. From here we soon broke into the ‘wilderness’ of the Angeles National Forest and the climbing became more… noticeable. 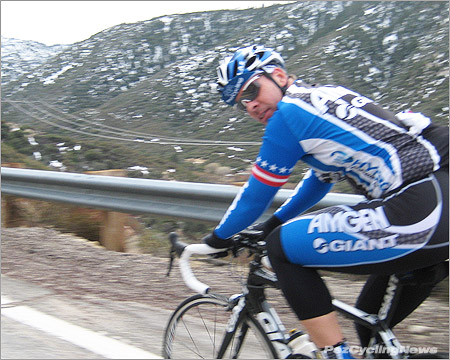 A big thanks to Jerry Jayne who organized the ride, and graciously allowed PEZ to tag along.

It’s about 11 miles (16km) from Acton to the Millcreek Summit, which for me is about an hour of climbing under normal conditions. I didn’t look at my watch, but can attest the grind to the top was like dying a slow death… with each mile my muscles got a little more tired, my feet and butt and little more sore… and the overall effort a little more of a struggle. The group started to break up, but from what I could see it was more like a general fight to survive that anyone hammering off the front – mind you, in spite of the increasing frequent stabs of pain emitting from my saddle, I was nowhere near the sharp end of this stick. 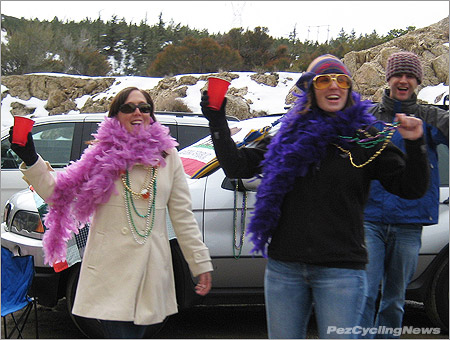 The grade picks up before the top, but the last couple of miles were noticeably easier as we’d reached the fans who’d driven up ahead of the road closures to see the race come by a couple hours later. I gotta say thanks again to all the PEZ-Fans who shouted words of encouragement – it really did make those final moments a little easier. 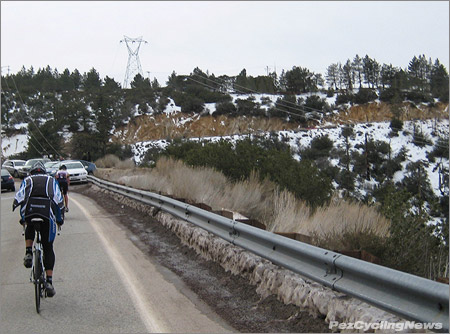 The Millcreek Summit is in site, but that’s still a long way off…

After a short regrouping at the top we rolled out for the 8 mile plunge off the mountain to the case of the day’s second climb. I was pretty sure the worst was behind us, and I was almost right. Except for the salt-on-the-wound climb to the Angeles Crest Highway, the second half of this day was top ride material for me. The 20 miles (aprox) of descending were some of the most exhilarating I’ve done. 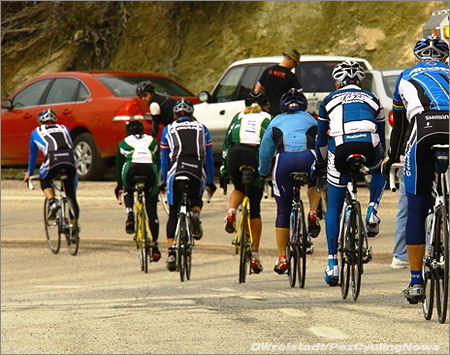 About to start 10 miles of some very tasty downhill.

Fast sweeping curves, diving and swooping – the closed roads did not hurt either – even the Chips moto-cop who decided to overtake our group on a blind corner couldn’t ruin this part of the ride.

The final miles of the route descended through some beautiful areas of Pasadena – big old houses, fancy gates and long drives… and the unmistakeable warmth of southern California sunshine signaled time to soon pull off my long gloves and leg warmers. 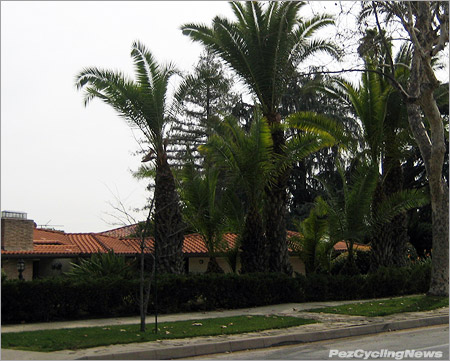 The ride was capped by savouring the final km inside the barriers and rolling across the official finish line at the Rose Bowl, followed by a shower in the famed stadium itself… and finally watching the actual race come through from the comfort of the finish line vip suites. And here’s a shout to PEZ-Fan Corey who was kind enough to share his table – thanks for saying hello! 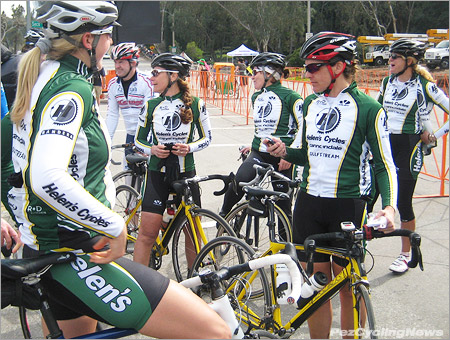 Several ladies from the Helen’s Womens’ team made this ride look a lot easier than it was.

That was a tough ride, but I was happy to have done it, and especially in such esteemed company. Thanks again to Jerry Jayne and everyone on the Amgen-Giant Masters team for inviting me along – and especially to Thurlow for that tow back to the group – now I know what it’s like to draft behind a motorbike.

And after four rides in 5 days, 13 hours on the bike, some 360km covered and several thousand feet of elevation gained (and lost), I’m reminded of how tough the daily grind of being a pro cyclist must be. I’m in pretty good shape for a 46 year old, but after watching the pros race into Pasadena and then hammer the finishing circuits, my mind just boggles at how fit they really are. Those guys are good.

– Thanks to everyone for reading!
Pez

Toolbox: Stuck In A Rut