Roadside St. 3: It’s 4:36 and I’m plodding my way across northern California’s “lovely central valley” with LOOK USA’s head honch Ming Tan, we’ve just dodged bouncing oil drums (empty but well rusted) that blew off a flat bed and almost nailed us head on – chapeau to Ming for handily dodging disaster and thanks to all the drivers behind for not creating this evening’s local news headliner – “Pile Up On I-205”.

We’ve barely made it over 50mph the whole way from San Jose – but that’s life surrounded by millions of people in the largest bike market in the US. 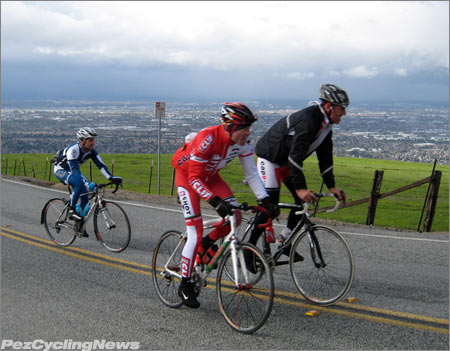 Minutes later we pulled into Modesto and missed the race… for the second time today. But fear not – even with the crap weather and crappier traffic, we still logged another classic day on the Tour.

I make no bones that this is my favorite part of the whole Pez gig – being “on race” and reporting whatever I can find as I basically parlay my passion for cycling into what some might call a “job”. It’ll be good to reconnect with old friends, some colleagues, and take a short break from my regular life as husband, dad, family guy… 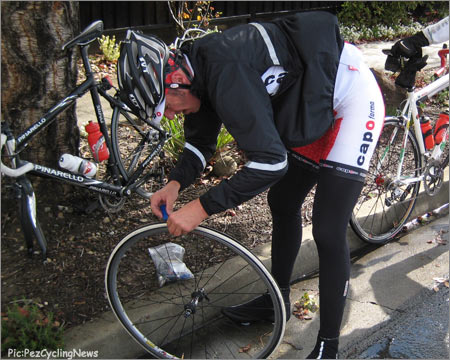 Gary V. of Capo lays into some tire maintenance just before Sierra.

The plan was simple – head out early and ride the first half of today’s 104 mile stage from San Jose to Modesto. The first chief obstacle was the climb over the Sierra Road. I first rode this back in ’07, when the stage came in from the north to finish and was I psyched for a rematch with this tough and long enough (3 miles) grunt. 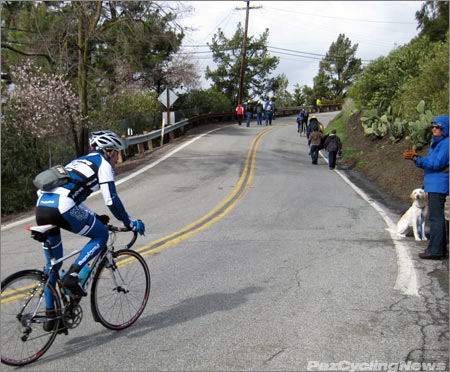 Turn 1 on Sierra Road… this climb just doesn’t get any easier.

The torrential rains that have already made this the toughest ATOC yet had fallen most of the night, and were still coming down when I pulled the curtains back at 7 :05 this AM. Glad I threw in my fenders at the last minute. The heavy winter storm was scheduled to stick around for one more day, so there was little choice but to concoct Plan B. 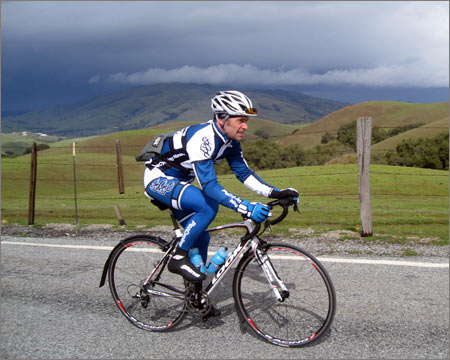 My cohorts for the day were Capoforma owner Gary Vasconi, Dylan and Eric from Clifbar, and Nick – better known as ‘Megellan’ – whose salt as a navigator would later be redeemed and appreciated.

After much deliberation at breakfast, it was deemed that Plan A was indeed the right one – we’d ride from the hotel, and go as far as we could into the stage before the weather turned us back. 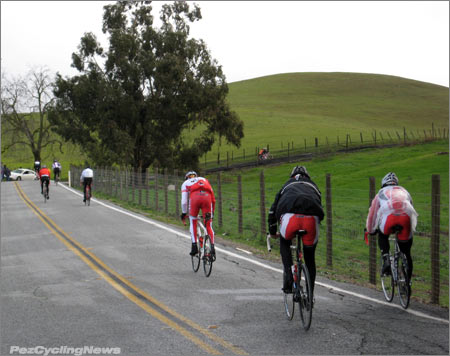 As if on some miraculous cue, no sooner had we clipped feet into pedals than the clouds parted and glorious sunshine poured down upon us. As we rode east to the hills, the clouds obscuring our quarry lifted and the site of lush rolling greenery lifted spirits – so what if we get wet later – at least things were dry for now.

Out of town and the final few warm up miles rolled by with tailwind assisted ease – almost lulling us into sense of security for what lay ahead. 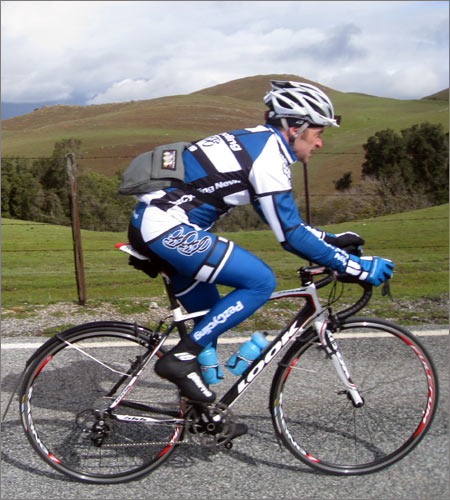 This time I’m riding LOOK’s all new 566 carbon racer – a complete bike for under $2700.00, kitted up with SRAM’s 2009 Rival group w/ compact cranks , Fulcrum wheels , and FSA carbon bar & alu stem. I’ll have more on this bike later, but I’ll say that it rides and looks a whole lot better than a some of bikes I’ve ridden at twice the price. The carbon layup and frame are designed to offer a little more comfort than the racy but comfy 586 intro’d last year, and the bike delivers. I can see this being a great bike for any serious enthusiast who wants to ride all day and do it again tomorrow. It’s the first time LOOK has offered a complete carbon bike at this price point, and could be the ticket for anyone wanting to ‘sample’ the brand, or just plain wanting a big value bicycle that’s a little different. 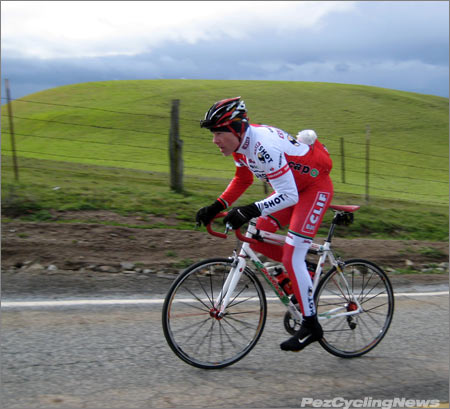 The placement of the climb today was likely too early to matter top the gc men, but perfect launch pad for the opportunist attack, which is exactly what happened. But before any of that, we’d be hauling our own carcasses to the top, taking in the spectacular views back to San Jose and the southern Bay area, and keeping one eye on the ever approaching wall of darkness – . 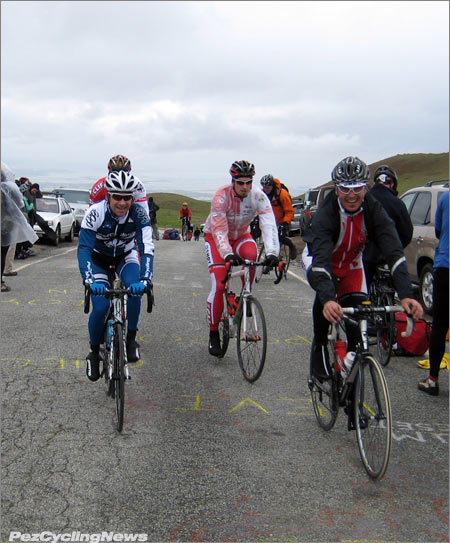 The higher we went the more fierce the wind – and it was blowing hard when we finally crested the summit. Celebratory pics were staged & snapped, and as the chill nipped at our bones, it was time to get the hell outta there. 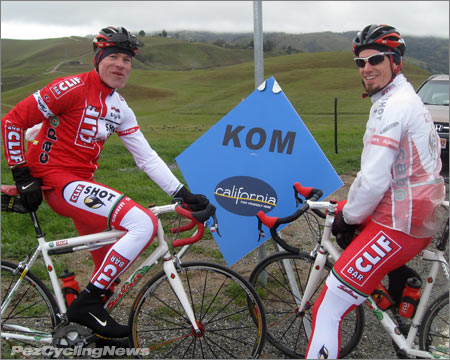 Dylan & Eric enjoy the sweet smell of the summit, at least that’s what I think it was…

By now the skies had darkened and the winds blew around the backside of the Sierra Road, leading us to some of the best high speed high sweepers I’ve seen in a long time. The 566 did not disappoint – when at the bottom, one of the guys commented that I seemed to know my way down the descent – based on how I was letting it go. Truth is that this was my first time around the back, and I just felt comfortable letting the bike run, dive and swoop – kudos to LOOK. 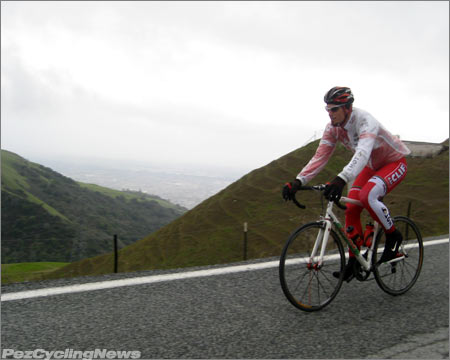 Over the backside, the temps dropped almost as fast as we did.

Off the descent now and driving int the headwind to make the base of Sierra in hopes we’d see the race, some yahoo in a beater Tercel yelled “You missed it!” The wind was blowing hard in our faces and the rain drops were starting to splat.

The base of Sierra road appeared over the next knoll and it soon became clear that we’d indeed missed the big boys. Hey, we still had a great ride under our belts, and another 30-40 minutes to home. That’s when the full brunt of the next front just opened up and the big splats turned to the spray of a hundred garden hoses. The Clif boys were pushing the pace, again, big ring style, which was fine since none of use wanted to be out here any longer than necessary. 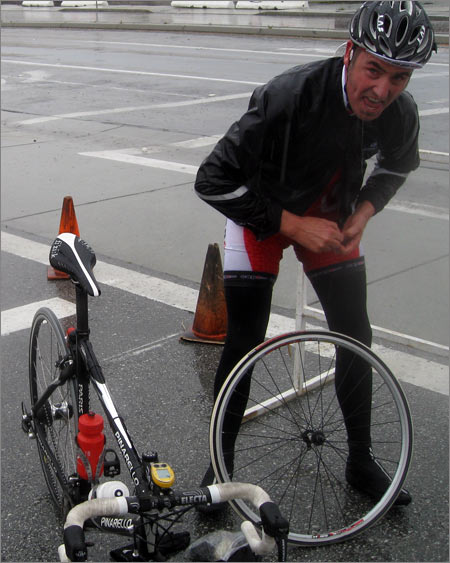 The rain was coming down so heavy, that the roster tail of Gary’s bike was giving me a full soak – and I was fifteen feet back… I finally just pulled off to the right – better to go it alone in these conditions.

The group was pulling along nicely, crossing the far too wide post ride expanse of suburban San Jose on our way back down town, when it happened again…. Psssssst. Flat numero dos for Gary. Kudos for making another fast tire change while the heavy shower finally soaked through to my toes, and we could all feel the body heat exiting stage-left. 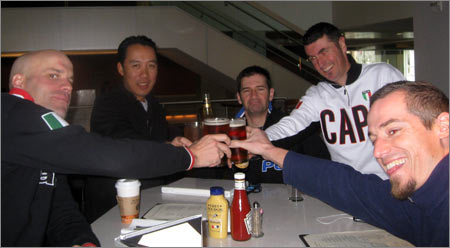 We made our way back to the hotel – hot showers and a cold brew. That was a tough day – as I complete this story at 11:00PM tonite, my legs are still sore… but the weather looks better for tomorrow, so ‘ride on’ I say… after a few hours of sleep… 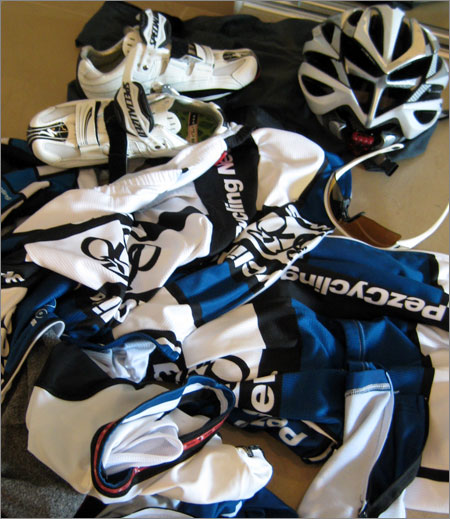 – and one more pic for y’all – there’s the complete Pez kit, completely soaked.

Thanks for reading and see you tomorrow – .
Pez