Catching Up With The Hincapie Development Team

The fun and sun of the Bahamas’ camp has passed and this past month the Hincapie Sportswear Development team was back at it in Greenville, South Carolina for ten days of hard riding, racing and preparing for the season. Team rider Ben Zawacki takes us through their preparations.

It was a Thursday morning and after a few rough weeks of riding alone, I was excited to head south and meet up with the team for our first true training camp. Thomas Craven, head director, and George Hincapie had chosen The Cliffs Communities as our home base for it’s close proximity to the North Carolina mountains as well as the Greenville Spring Series races, put on by our sponsor Hincapie Sportswear.

After the luxury of our first camp, I was expecting some down and dirty riding this time but after pulling into the gated community with an, “Um, I’m with Hincapie..?” I was greeted by a beautiful home where I would be staying with Mr. Craven, a teammate and chef Biju Thomas.

Maybe this trip wasn’t going to be completely void of extravagance, nonetheless I was still mentally prepared for longs days in the saddle. 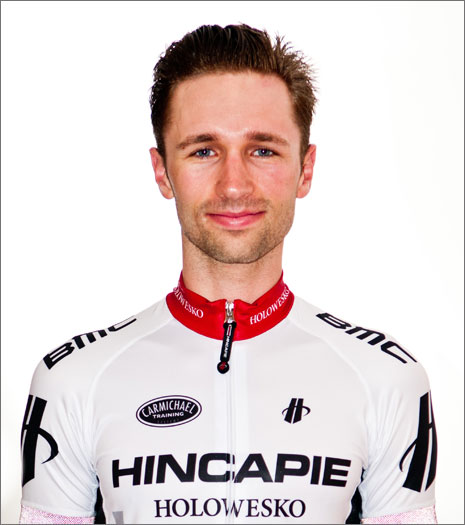 The first order of business was getting fitted to my new BMC bikes and picking up gobs of clothing. Professional cyclists get lots of kit and I think that’s doubly true when your sponsor is a clothing maker. 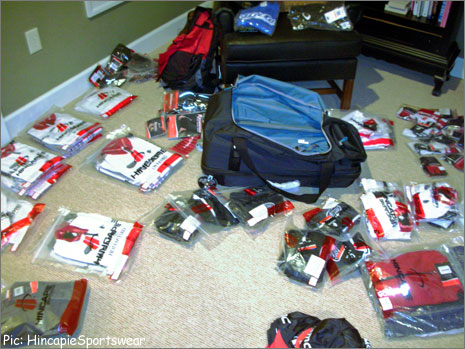 The boys of Carmichael Training Systems in Asheville, North Carolina would be helping us with our positions using Retul’s motion-capture technology to generate a 3D dynamic picture of our positions on the road and time trial bikes.

With some fancy wand waving, they created a computer image of my old bike and had me up and running on my new rig in short order. I came in relatively happy with my position and with only a few minor tweaks I was ready to go. My time trial fit has always been a bit extreme, and wonky, but they moved me into a much more upright and comfortable position that I will admit, I was a bit skeptical of. 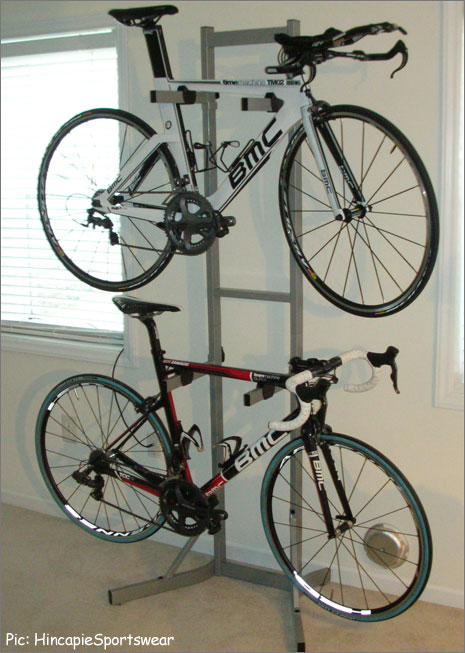 Luckily, later in the week we jumped in the mobile Speed Tunnel facility for some wind tunnel testing. If I had to choose a highlight of the camp, this would be it, partially because wind tunnel testing is just plain cool and partially for the brilliance of making it portable and easily accessible. 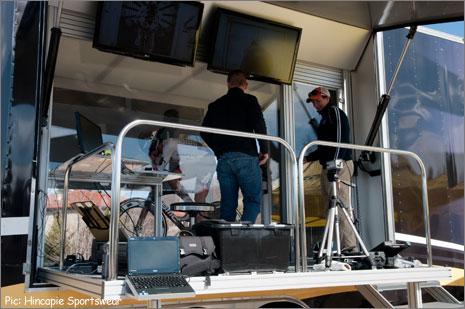 After a few preliminary runs with my original position, their chief aero-expert hopped in with a Carmichael coach to start tweaking and contorting my body into something more sleek and hopefully slippery. 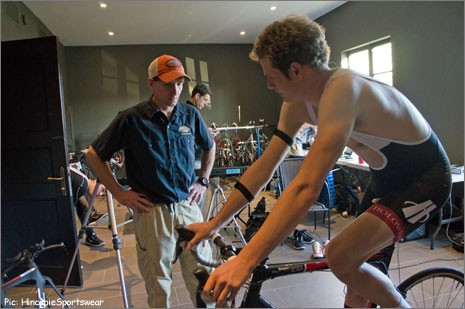 I’m fairly proud of my stretching abilities and wanted to try and get lower, but to my dismay, the drag numbers held steady as my pedaling became decidedly less so. When it was all said and done, my position was fairly close to what CTS had put me in. Holding proper position and form were the biggest takeaways, that and dropping nearly 300 grams of drag off my initial position. This will translate to roughly 30 watts of savings at 50 kilometers an hour. Cool. I’m not one to brag, but rumor has it that my drag numbers were the lowest of the team. Hopefully, I can put that to good use.

Optimization and incremental gains are big in cycling these days and we were also lucky enough to have Brett Lindstrom of Lake shoes at camp to help us dial in our new heat-moldable kicks. Cyclist can be a fickle bunch, but Brett was a trooper and managed to get everyone in a new pair of shoes and make them happy. Big thanks to him for putting up with all of our smelly misshapen feet.

With all these resources, our job was to simply ride and put all of our new toys to good use. The riding in upstate South Carolina is amazing and we got in some fairly spectacular days. To give an idea of the riding we did, Panther Mountain is located within the Cliffs Community and is about four kilometers long and averaging around 12%. That was about three minutes from my front door.

That climb was the cap of our first ride. The night before, I had turned down a pastry, much to Oscar Clark’s disappointment, but after that climb, I decided that dieting was no longer an option, my weight was set and I was going to need as much fuel as possible to make it through this camp. 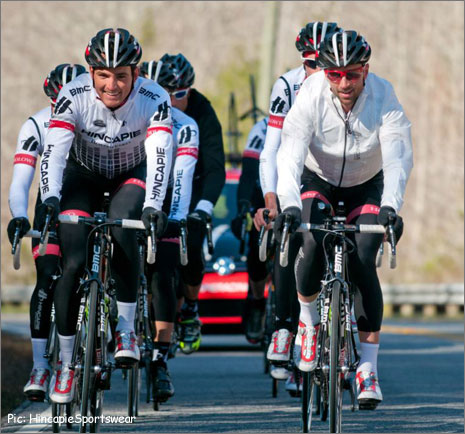 It’s hard to go through all the great riding we did, but my favorite day was the loop of Gran fondo Hincapie. Starting from Hotel Domestique, the Hincapie’s future resort, the ride rolls east past Lake Lanier and into North Carolina. Then it’s up to Skyuka Mountain and Howard’s gap before rolling along some beautiful mountain roads and finally up Green River Cove, 16 switchbacks and all, before descending back into South Carolina.

Recovery was key from all the training we were doing and the daily massages along with acupuncture from our soigneurs and team doctors kept us in tip-top shape. And yes, acupuncture is a bit unnerving, but after the initial shock, quite relaxing. A little eastern flavor keeps things interesting.

Keeping everyone fueled was another top priority and we were lucky enough to have chef Biju there to help out. I’m not sure how it’s done, but he managed to cook rice and oatmeal into something not only eatable, but down right delicious. Everything was made from simple and healthy ingredients and always brought silence to the dinner table when served.

The final aspect of camp was racing at the local training series put on by our sponsor and team’s namesake, Hincapie Sportswear. Being a professional team, it’s always a bit risky going to local races, particularly with a full squad. If you win, you did your job and it’s not exactly note-worthy. If you lose, well, we just don’t think about it.

For the maiden race of the year, we did ourselves proud. Our strategy was ride down from The Cliffs, thus adding forty miles to the race and ensuring our pro-ness, and then race hard from the get-go. Our plan paid off and we took spots first through fifth in a not particularly light field. Places sixth and seventh belonged to professional continental riders, so it was certainly no cakewalk. 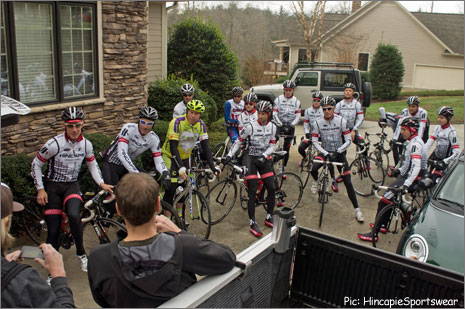 The camp’s two final nights concluded with dinner at George and then Rich Hincapie’s homes. Beautiful places, delicious meals and good company were the perfect conclusion for our last meeting before the season begins. 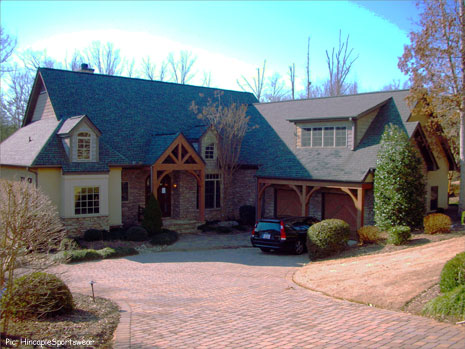