We’re proud to announce that the CCB International cycling club has chosen PezCycling News as the exclusive news source for their newly launched website! One of the most prominent clubs on the east coast, they also boast an illustrious alumni including Tyler Hamilton…

Cycling clubs are the heart and soul of organized cycling around the globe. From those seeking pleasurable rides through the country-side to those looking to launch a great racing career, club’s provide comradeship, structured rides and a place to learn the skills of an extremely varied sport. 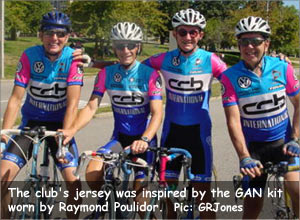 Founded around 1979, the CCB International (located north of Boston, Massachusetts in the USA) offers cyclists of all abilities and interests a vibrant club environment. Today with a membership in excess of 150, the club participates in most forms of cycling with racing being a major focal point. However, no matter to what level riders aspire, the CCB International has a proud heritage of inclusiveness. Pro/1/2 riders will be found mixing it with novices, those who may have no pretensions to race and everyone in between. Tyler Hamilton, our most famous alumni will occasionally be seen enjoying a ride with us during his very infrequent trips back home. Similarly, Tim Johnson (Saturn) who was the U.S.A.’s very first medalist at the World Cyclo-Cross championships will be seen in the bunch from time to time. 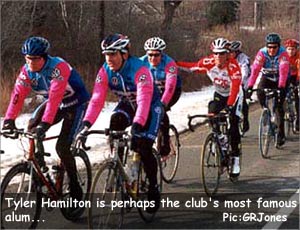 One of the members of the small bunch of founding enthusiasts took our CCB name from a club of the same name located to the West of London in England. Our distinctive jersey design was modeled after the old Gan team jersey famously worn by such riders as Raymond Poulidor. The first major talent to grace our rides was Erich Kaiter who eventually claimed three National Championship medals in 1990 and was also the top US finisher at the Junior World Road Championships ahead of young George Hincapie that year. With Erich came his schoolmate Tyler Hamilton who in his very first time trial blitzed the local course record with a speed of 29.9mph. The initial reaction was that Tyler must have taken a short cut. Everyone is now aware of Tyler’s awesome abilities and we are proud to say that his journey started with the CCB. 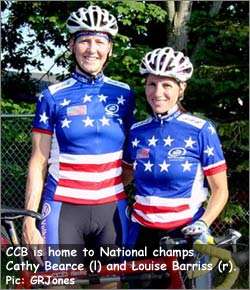 Today the CCB is populated by tremendous talent at every level. When Sean Kelly visited the area and came across our own Tommy Mannion, Kelly said that he had always wanted to meet his legendary countryman who now resides in the US! In 2003 the club recorded over 35 wins and multiple podium placings. Our tally of wins over the last 20yrs or so exceeds 500. Top honors this year goes to our Women’s 40+ master’s team with Cathy Bearce winning both the ITT and Crit National Championship jerseys and Louise Barriss winning the RR Championship jersey. Louise also won the North American Master’s Road Championship jersey contested in Sutton, Canada.

To read more about this dynamic club visit the newly overhauled CCB web site at https://ccbracing.com . And if you are visiting the Boston area join us on a club ride.

Want PezCycling News Headlines for your own site?
It’s FREE and it’s EASY – We can deliver our top 10 daily headlines as content for you own site.

All content is updated automatically – so just like the infomercial – you “set it and forget it” – only you’ll be way more satisfied with PezCycling News!

For more info contact us now!
I Want PEZ Headlines!