Chasing Flanders: Inside A Classic Race!

If I had a touch of the Divine about me, I’d walk across the North Sea for another experience like chasing the Ronde van Vlaanderen with the family of Predictor-Lotto’s Pez-fave, Bert Roesems. The most important day of the year for Flemish sports fanatics, became one of the most special of my life.

I’ve seen TV shows about storm chasers getting as close to a tornado as they dare before racing for safety when it changes direction. The Tour of Flanders is a tornado in every way. Everything in its path is prey to its whims, so you get out of the way if you can. But you still push to get closer. Luckily for me, I had some great guides, as we drove right into the storm’s eye. 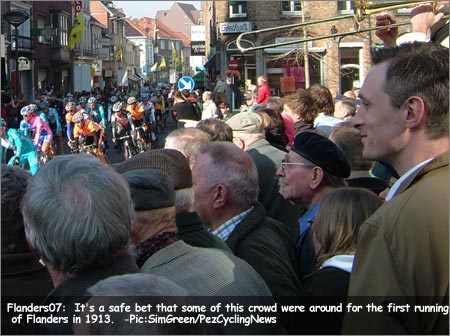 It’s tough to quantify the fun of chasing a Classic – but seeing the race 9 times on-course is really, really… fun.

Everything I’d imagined about the unofficial World Championships is suddenly vividly real. It’s an awesome show of power and force. The speed is astounding, as the cavalcade swirls through the countryside.

The motorcycle outriders hail through first, a frenzied warning of the fury to come. The publicity caravan ramps it up a notch. The crowd noise swells, then the hum and clatter of the helicopters – you know the Ronde is almost on top of you, before the riders suddenly explode into your senses.

There are tens of thousands of people, at nearly every point of the route – usually five or six deep on either side in the towns and villages. The good weather and Tommeke’s chance to go down in history drag nearly every living soul to the roadside. 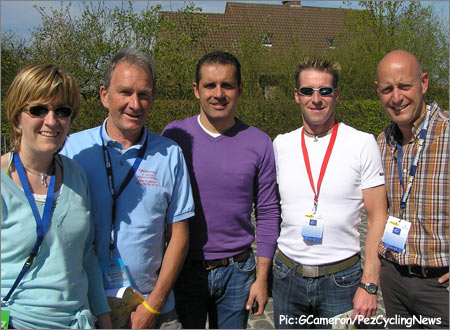 Start Line
I hook up with Andrй, Inge and Alain after picking up the press cards on race day. I hand Andrй the stickers for the car (“Yes, perfect! You can come next year!”), and we’re on the road before the riders. “If you wait for the start, it’s impossible to get out,” says Andrй, so the agenda is set – get ahead, and do it fast. 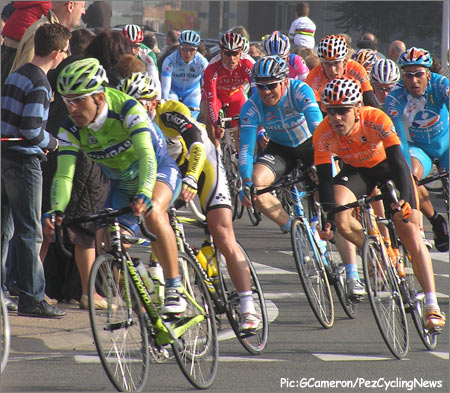 The bunch, all together, thunder towards Tourhout, where we catch them for the first time after the start.

1. Tourhout
Andrй knows the roads better than the police and persuades a duty-cop to let us through a barricade outside Tourhout. We watch the bunch steam by, with Bettini and Boonen lurking way down the field. The tail end of the field is going through and the engine is already running.

These guys have done this before… There’s no time to lolly-gag as Inge opens the door and I dive past. The speed shoots up and we’re off to appointment two.

Vansevenenant does his job … Keep an eye on Hoste, just flying out of Tourhout about 25 minutes into race.

2. Tourhout
Just the other side of Tourhout, we catch the riders again, as the Flemish tornado devours another roundabout. I snap a couple of random picks, trying to keep an eye on the others. I hear a shout.

“Gordan, let’s go!” Alain is legging it back to the car, and all around is mayhem. Hundreds of fans trample through flower beds in the scramble for transport.

And I mean everyone, like the mass start of an all-ages triathlon swim. Kids, old men, middle-aged ladies, families with children and gorgeous girls in stiletto-heeled boots! This is what Andrй means when he says the Flemish are crazy for the Ronde!

3. Wannegem-Lede
Inge tells me the QuickStep VIP drivers are annoyed that so many fans are following the race. Their job is made harder, but she wants to support and encourage Bert. “What does the guy expect us to do? Stay at home?”

We barrel towards the cobbles of Wannegem-Lede, overtaking police cars, with the press sticker in the window miraculously opening the way. Cops wave us through, and crowds part like we’re re-enacting a scene from the Bible. Andrй laughs: “Once again, this is the real Tour of Flanders!” 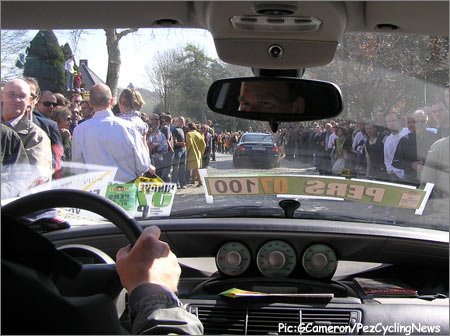 Here’s the ‘real’ Tour of Flanders.

It’s a constant stress to stay ahead of the race. All around are car horns blaring. A police outrider almost comes to blows with what looks like a Hell’s Angel at 60 miles per hour. Eventually, the offender pulls over. Only on the day of the Ronde can a cop get away with that!

If anyone on the roadside here sneezes, they’ll lose their head. The stakes are high, as everyone wants to see the race. Vehicles stream through with no room for error. Fans are practically in the road. The riders won’t be too much slower than us, either.

The radio blasts out that Boonen has crashed, but no one in the car is triumphant. These guys want Predictor-Lotto to win, but not because someone else is hurt. 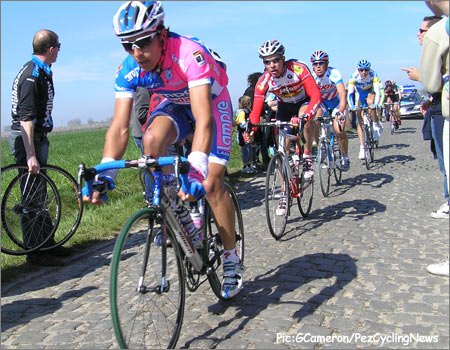 Andrй reverses the car into an random old couple’s driveway – they don’t mind. It’s the Ronde, after all. They do some bemused weeding, as we break out some beers, and enjoy them in the sun. Franzoi leads the break through and we race back to the car.

4. Mater
We head up the cobbles of Nokere where we see the finish line of Bert’s big win in the Nokere Koerse last year. The radio crackles: “Chute (static) — . Predictor-Lotto!”

Inge gasps and grabs for the volume – the wait for the number is about 5 seconds, but way too long. Greg Van Avermaert has gone down. Inge looks dismayed. 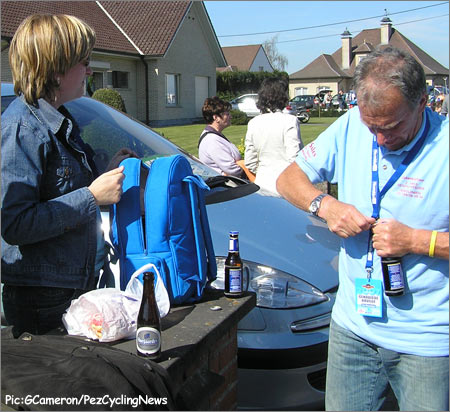 Time for a quick refreshment.

5. Oude Kwaremont
We have a struggle getting to the climb. The traffic is mayhem. To make matters worse, Inge gets a call – Bert has punctured. Silence in the car. His race looks over.

We get a scrambled picture on TV – the field has slowed up, and Bert regains contact. He comes up the climb in touch and Andrй hands him a bottle. 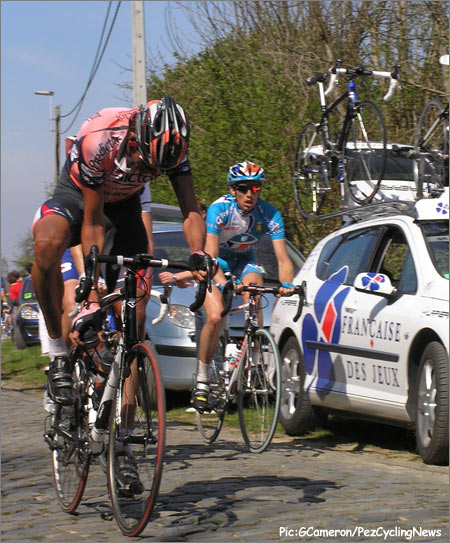 Our man Bert stuffs a new bottle into the cage on the Oude Kwaremont.

Gert Steegmans punctures where Inge is standing. He’s screaming into his mic – “Shit! Shit! I need a new wheel!”

We’re back in the car. Andrй is at the wheel, Alain is on the map, Inge is on TV and cell phone duties. Bert’s cousin is using the radio to listen for updates. I’m trying to be useful by staying quiet.

There’s a thump – a motorcycle and car have come to blood-free grief. Inge looks worried. “This is our car. We’re selling it soon, so Bert’s been saying “Drive carefully!”

The break of the day still toiling on the lower slopes of the Leberg.

6. Leberg
Inge gets another text saying that Bert is on the front on the Eikenberg. The break comes through looking knackered, and across the valley we can see the tornado gathering strength and speed again.

Vansevenant is on the move, looking good as he leads Steegmans. O’Grady and Cancellara look awesome as they drag the field past us at the speed of thought.

O’Grady and Cancellara forcing the pace behind the break as the heads of statre hit the Leberg.

7. Brakel
De Peet’s mansion is just out of sight as we enter Brakel. There’s enough time to swill down some water before the field appears. Once again, Cancellara is looking awesome. We’re well-practised with the car by now. Only Bo and Luke Duke can get in and out of an automobile so fast!

They’re off the top of the Muur and Bettini’s face tells the story – he and QuickStep are losing the race.

8. Muur
An amazing day gets better as we fly up the Muur. The crowds are enormous and so is Bert! In glorious Technicolor, there’s our boy on the giant screen, laying down the law at the front of the Tour of Flanders. It’s a super moment.

Off the top, Ballan and Hoste are strong, Bettini is flagging, and Boonen seems to have vanished.

9. Two kilometres to go
Andrй steers us out of Geraardsbergen and onto the main road into Ninove. He celebrates because we’ve had an amazing success rate. Nine race views was much more than we expected. Years ago, when he used to do this with his father, it was a lot easier to
catch the race.

We pull off about halfway between the 3kms banner and the 2kms banner. Inge has the TV primed, and suddenly Ballan and Hoste sweep into view. The Italian glides through, hands draped over the bars, Hoste tucked in. Our crew scream encouragement at Lief. Once the rest of the Predictor-Lotto boys are through we cram round the TV. 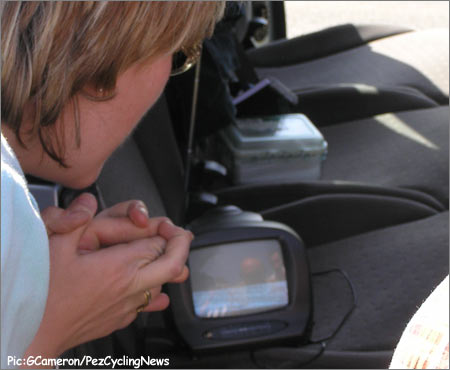 Inge doing what thousands of other Belgians (and race fans around the world) are doing at this moment.

Inge has her fingers crossed for Hoste, everyone murmuring their hopes. It’s shouting by the turn with 500 metres to go. Pandemonium with 200 metres left as Hoste swings past Ballan. Everyone’s leaping around – the win is just a few breaths away.

The TV reception crackles, the picture snows – it comes back and Ballan has his hands in the air. How the hell did that happen? We can hardly watch the replay of the sprint.

We can’t believe it – a massive anticlimax when Hoste was so close. 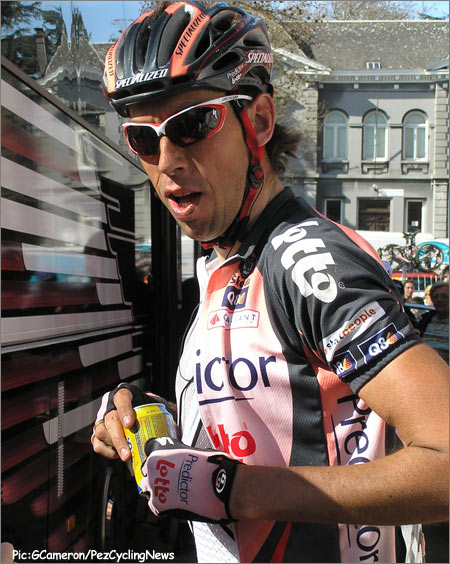 A surprisingly fresh looking Bert grabs a drink back at the team bus.

The finish
It’s mobbed at the team bus, as the Predictor-Lotto families and friends arrive. Van Summeren’s girlfriend is there. So is De Vocht’s. Bert arrives looking amazingly good for a guy that’s worked his ass off for seven hours in the heat, dust and hills. Bert is scrummed by fans and press, but answers everyone.

Vansevenant rolls in, looking close to tears. Everything hurts right now. The riders start to leave, but we roll with Bert to the bar. As Alain says: “Today, we didn’t get the victory, but anyway, we’re now going TO the Victory!”

One of Bert’s bosses, the president of the Belgian National Lotto is in town. “Second is disappointing, but the team rode well. And with this weather and atmosphere, everyone had a good day.” 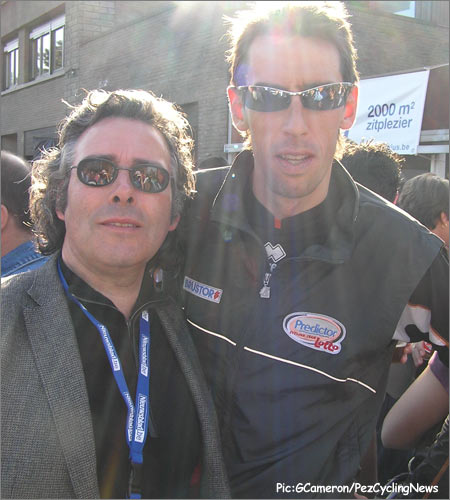 Postrace – time to celebrate a great day with one of the team bosses.

There’s a sudden blast of the tornado again – a human storm sweeps past the bar. Ballan, the winner, pursued by fans and press – then pursued by a breathless soigneur, lugging the victor’s trophy.

I part company and let Bert and co get back to their normal lives on this extraordinary day. The party is raging at the Victory Bar, but there’s Gent-Wevelgem and Paris-Roubaix round the corner…

– It doesn’t seem enough to just write this, but we offer a huge thanks to Andrй, Bert and Inge, and Alain for their help and generosity to help us bring you this amazing perspective from one of the greatest races in the world.