Chasing the Race of the Falling Leaves

‘Goodbye from Bergamo’ – seems a fitting title for the last race of the ProTour “proper”.  As riders and fans enjoyed the last-day-of-school atmosphere, I was living out a wish that’s been in the making for almost 10 years – to chase Il Lombardia myself.

Ed Note: I wrote this piece in 2014 after my first visit to Il Lombardia, and this time of year always makes me feel nostalgic for what I often say is my favourite race of the season.  Let me know if you agree… -Pez

It’s 6:00PM and the late afternoon light has the lake and surrounding towns glowing in a warm early autumn light as I write this in my room at the Hotel Il Perlo Panorama in Bellagio on Lake Como.  It’s cool outside and even in my room I can smell smoke from a nearby wood burning fire. I’ve got a cold beer for inspiration, and Mrs. Pez is reclining after an afternoon massage and checking her emails. 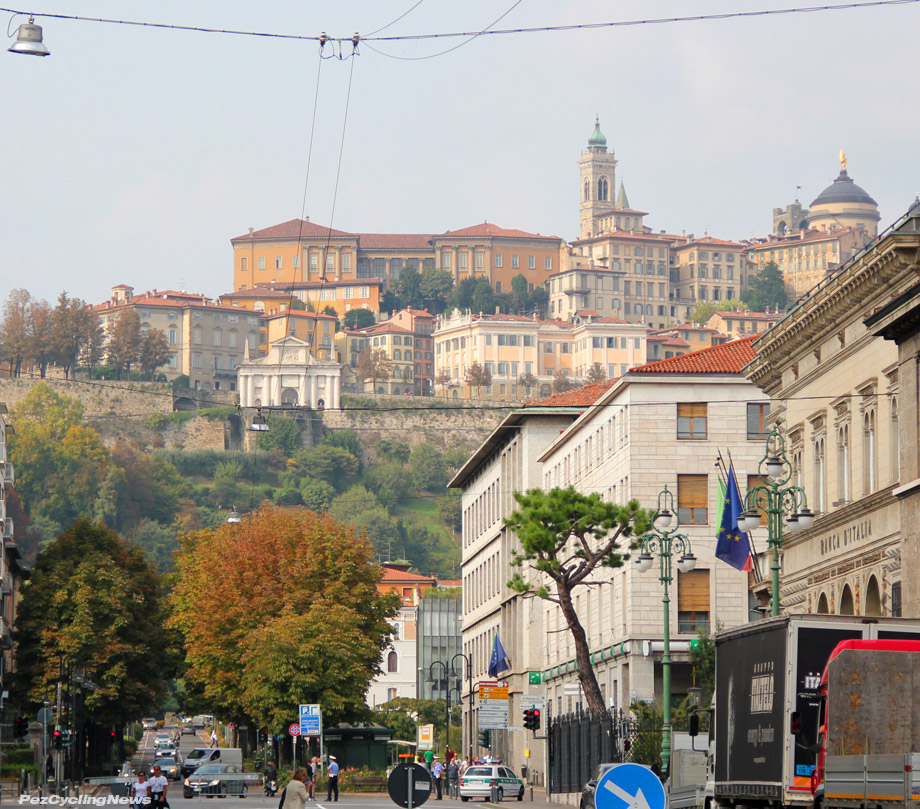 Bergamo glows in the autumn light awaiting the arrival of Il Lombardia.

We’re in Italy on an anniversary of sorts – we first discovered, but last stayed at Il Perlo 10 years ago. We loved it, and have always talked about returning, but the last decade has a been a busy one, especially since we started ‘la Famiglia Pez’ with the addition of our two daughters. But they’ve reached the age (and we’ve reached the point) where a cross-globe trip for us was do-able, and the stars pretty much aligned so we could be here – sans kids. Yup – me & the Mrs. on a week-long holiday in Northern Italy.

Even better than convincing Mrs. Pez that it’s actually possible to enjoy a trip to Italy that lasts less than three weeks, was the timing to see the Giro di Lombardia. AND take her along for the ride to show her just what it’s like to chase a race and see what a day at my ‘office’ really looks like. 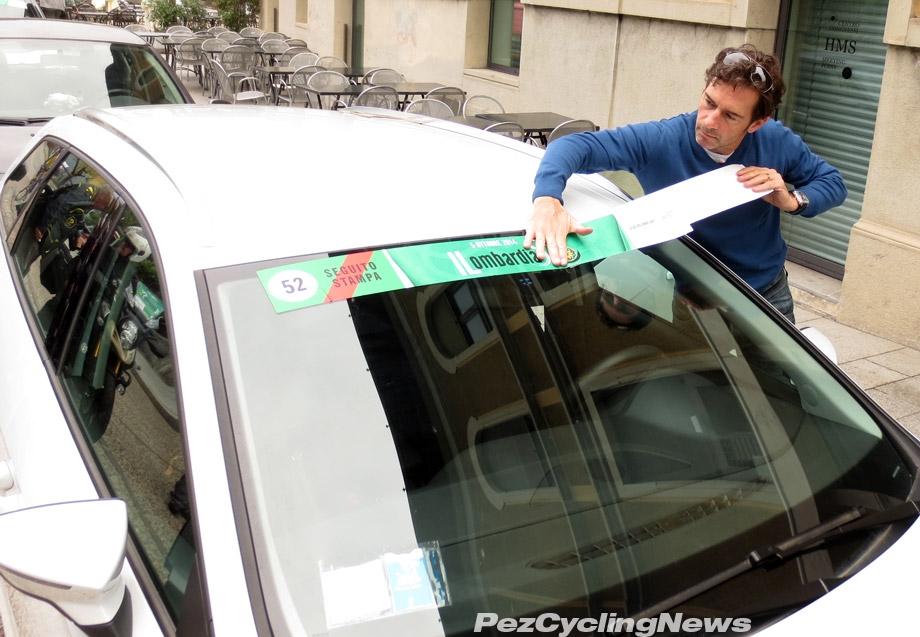 We made it to Como for the start just after 9:00 AM, and the first order of business – and this never gets old – was picking up credentials and stickering up the rental car.

To add some perspective – I became enamoured with Il Lombardia several years ago, soon after we started reporting on the ‘Race of the Falling Leaves’, and I became familiar with the natural beauty of Italy’s Lakes region, and the arrival of Fall’s wonderful palette of colors. I’ve even booked my trip here twice before, but had to cancel both times for various reasons. But the dream stayed with me, and at this moment I’m living it. 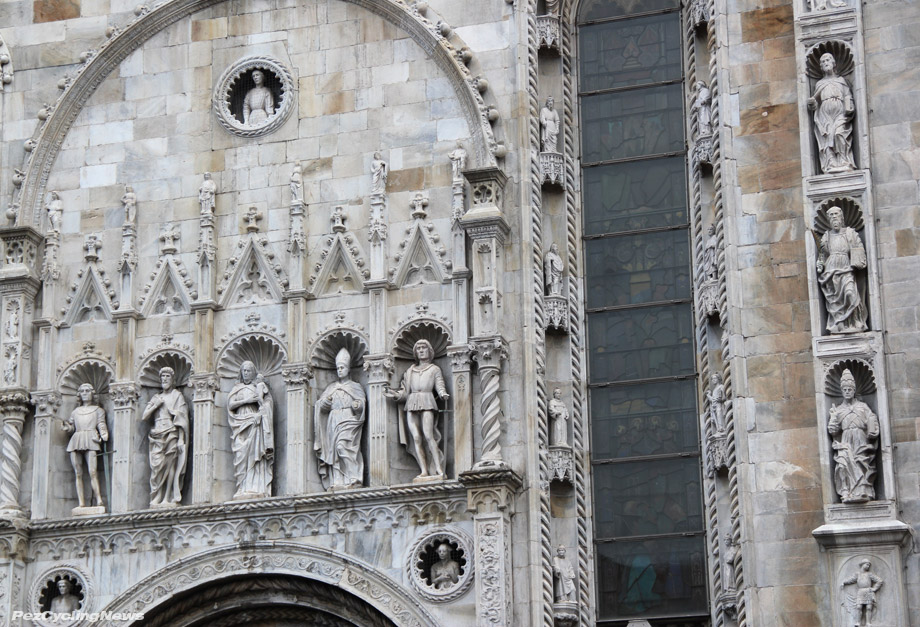 The statues of Como’s Duomo cast a serene eye over the startline.

One of the things I’ve always appreciated about the race was its combo of history – almost 100 years old, and its place in the pro calendar as the last Monument of the year. The gorgeous setting around Lake Como, the mix of riders looking for one last result, hoping to influence a good contract or even a job next year, the often terrible weather, and the amount of climbing, and that by now your season was either boom or bust, make this a race like no other.

The plan was to chase the race from start to end, with full expectation that nothing ever goes as planned, and that no matter what, a roadside adventure would be guaranteed. 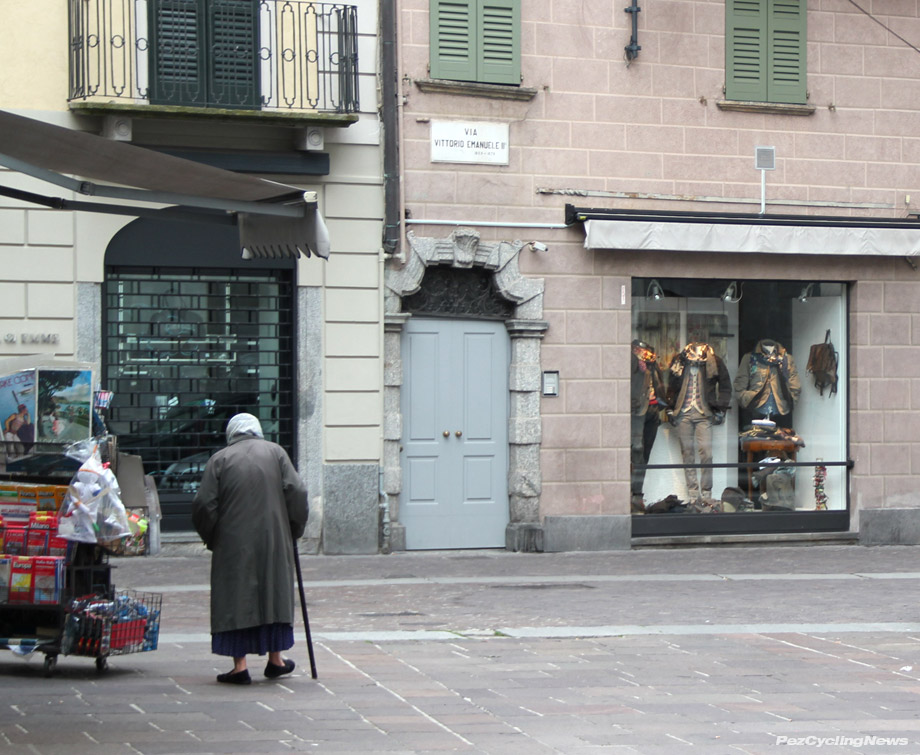 The start of any race is always a thrill ride – at least from a reporting perspective. The riders tend to stay in their team busses until the last minute, so the early minutes of rider sign in starts as a ‘not much going on’ affair as the announcers struggle for words to keep the crowd entertained. 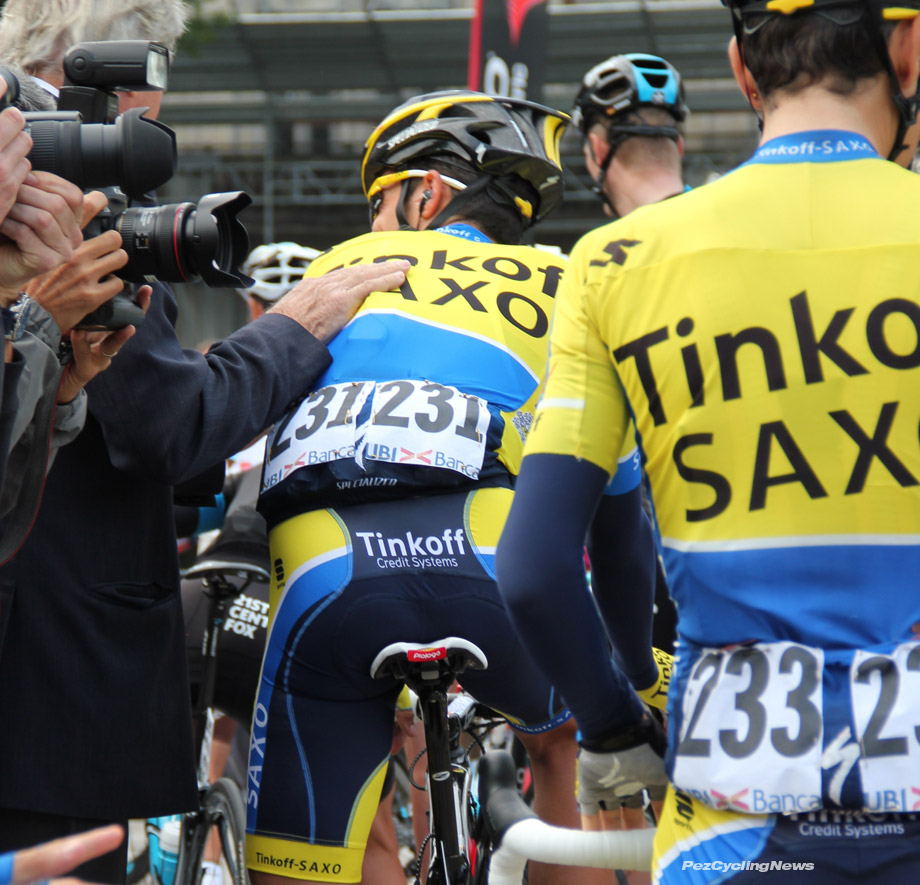 As the official start time draws closer, the rush of teams and riders gets pretty hectic as journos clamour for last minute interviews, fans shout for autographs, and riders catch up with friends and colleagues from other teams. 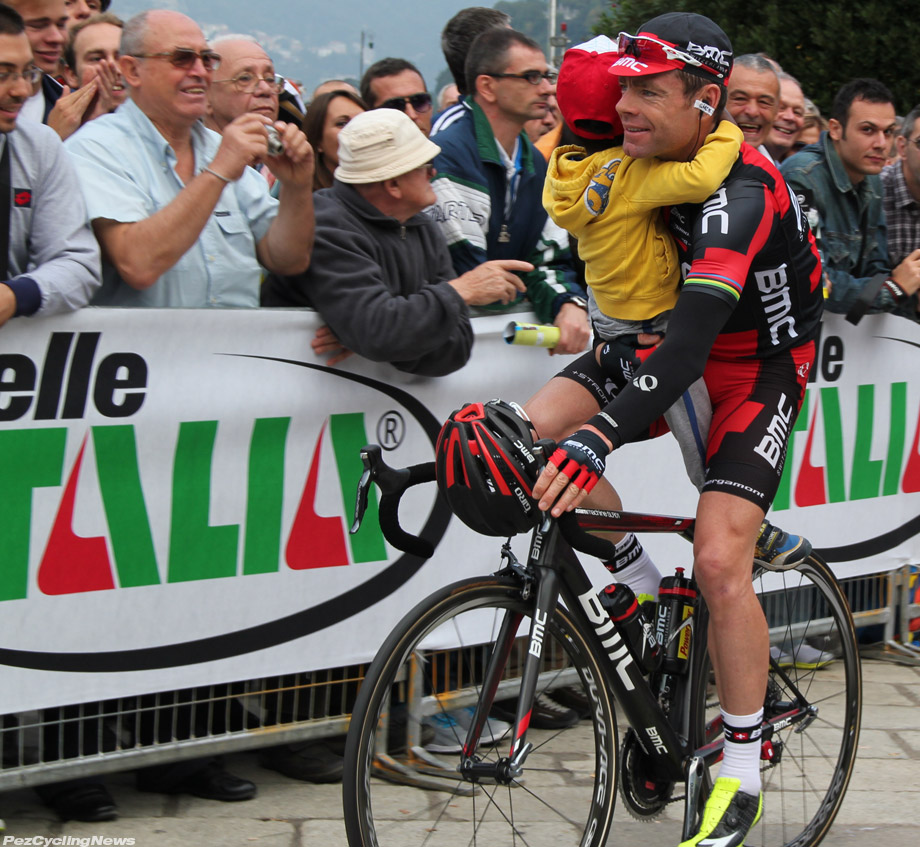 While most of us might not bring our kids along to our last day on the job, Cadel’s arrival said a lot about his class, and tells me he’ll do well in his new role as global ambassador for BMC. 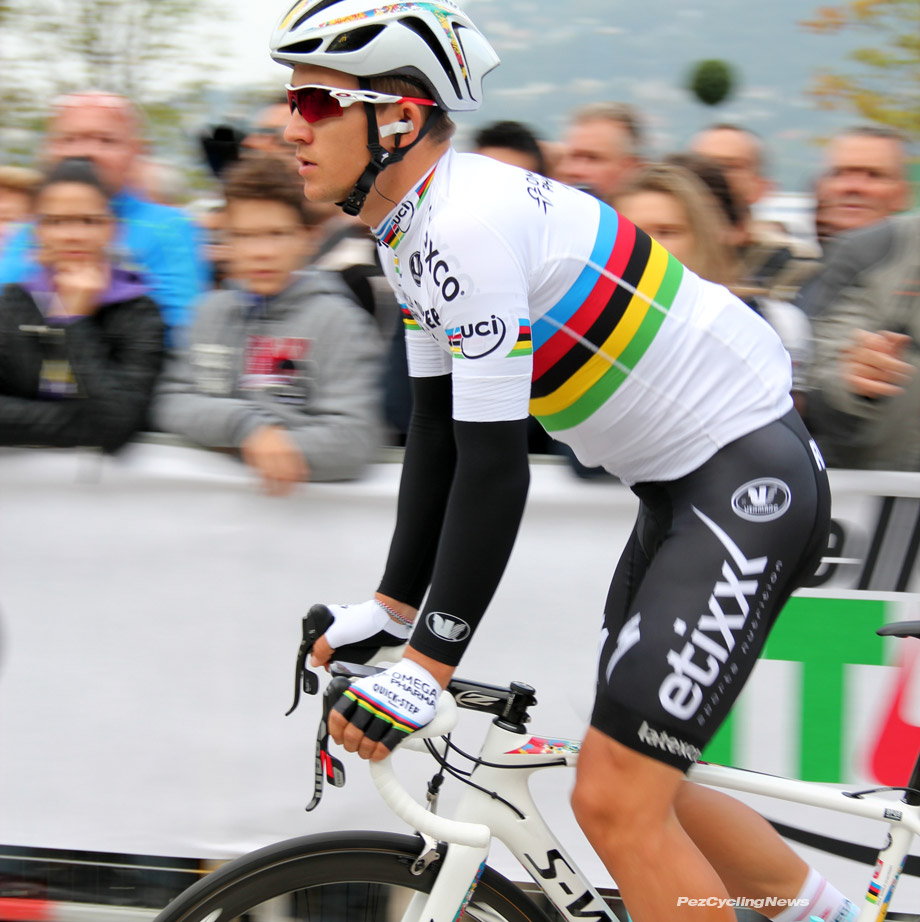 Recently crowned World Champ Kwiatkowski made a stylish entrance, while 2012 Giro Champ Ryder Hesjedahl rolls in on what’s gotta be the biggest frame in the bunch. 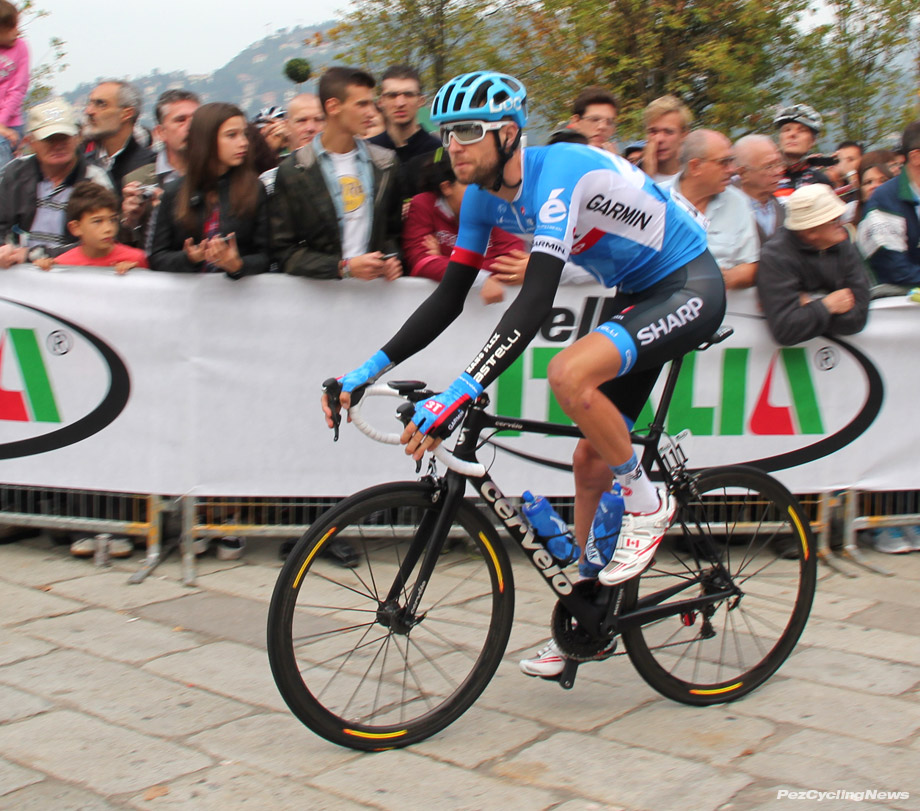 I gave Mrs. Pez our 2-minute warning and we made our way out of the melee so we could get ahead of the race. Crossing back over the start line, it was smiles all around as riders wished each other luck, in what’s gotta be the most relaxed race-start of the season. 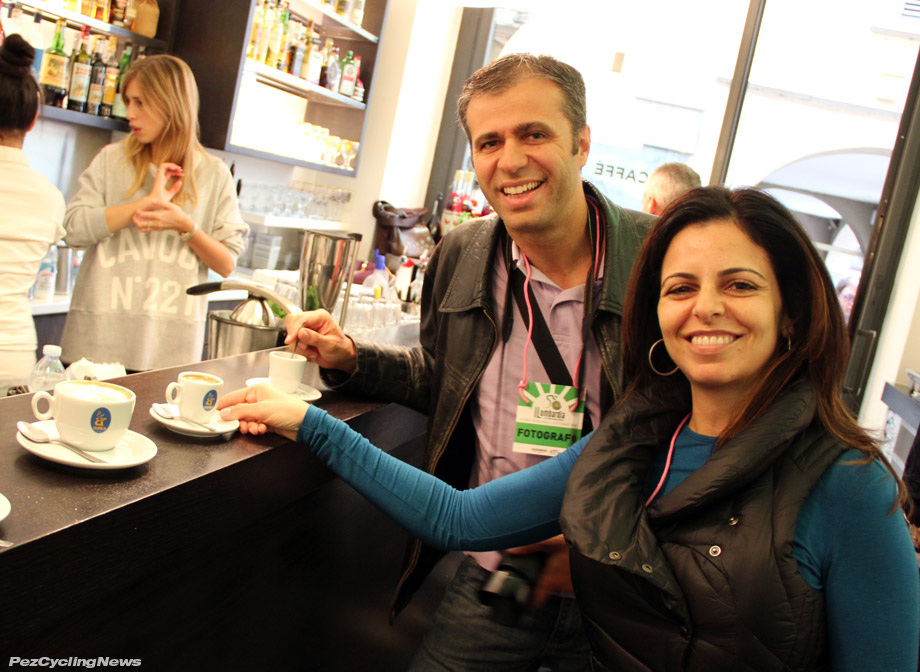 And while riders reconnect, so do the rest of us. PEZ-Man Alessandro hit the road at 5:00AM this morning to get here for his own roadside reportage, and a celebratory coffee is as good as a meal. 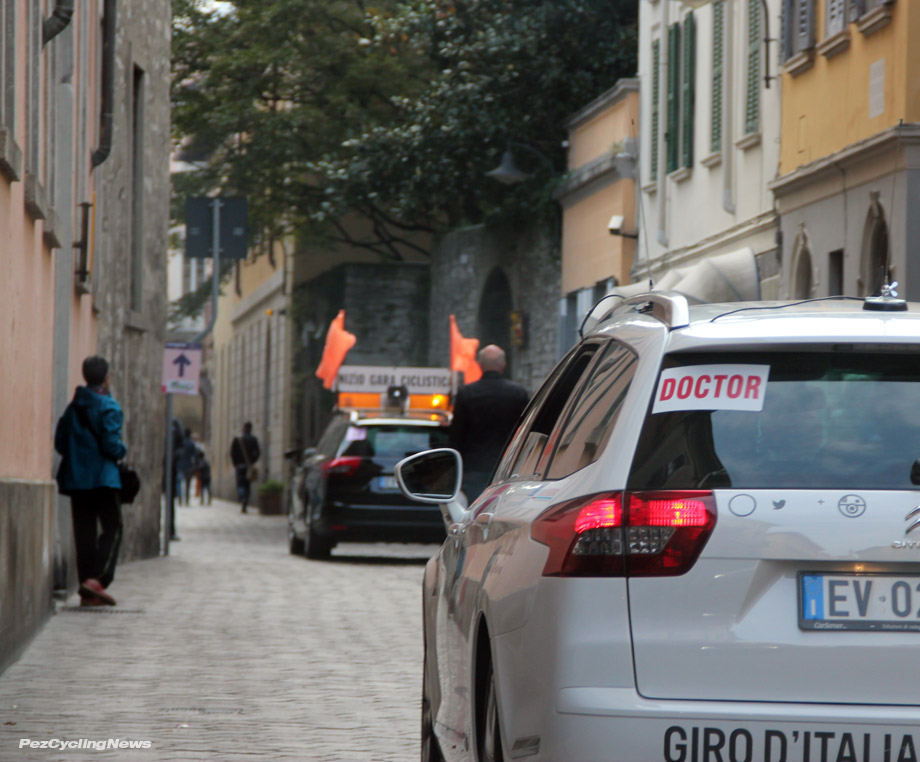 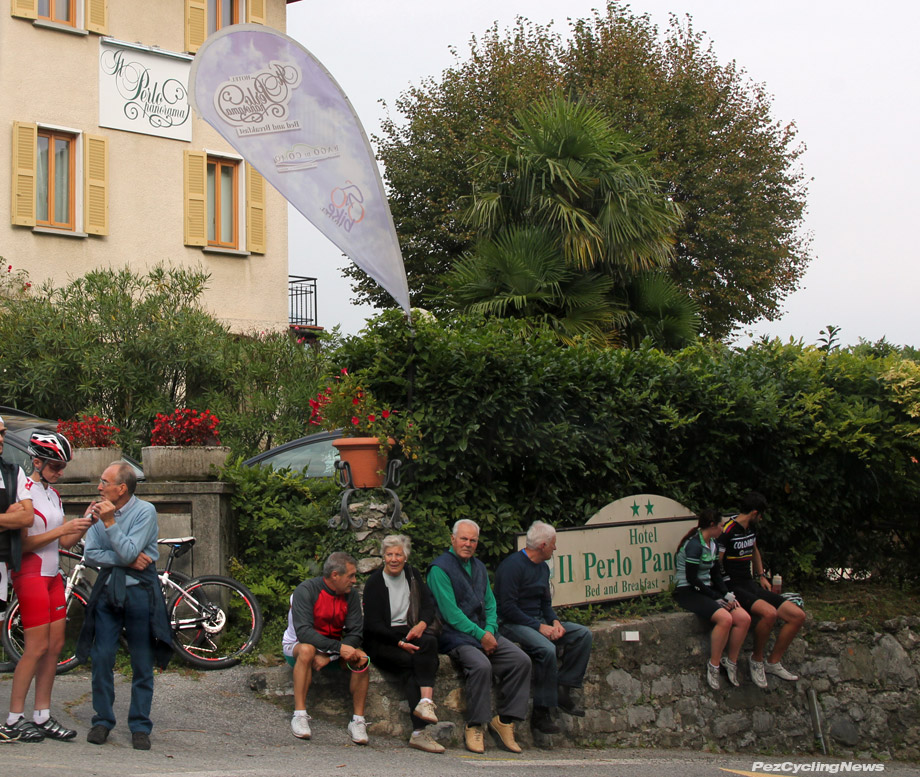 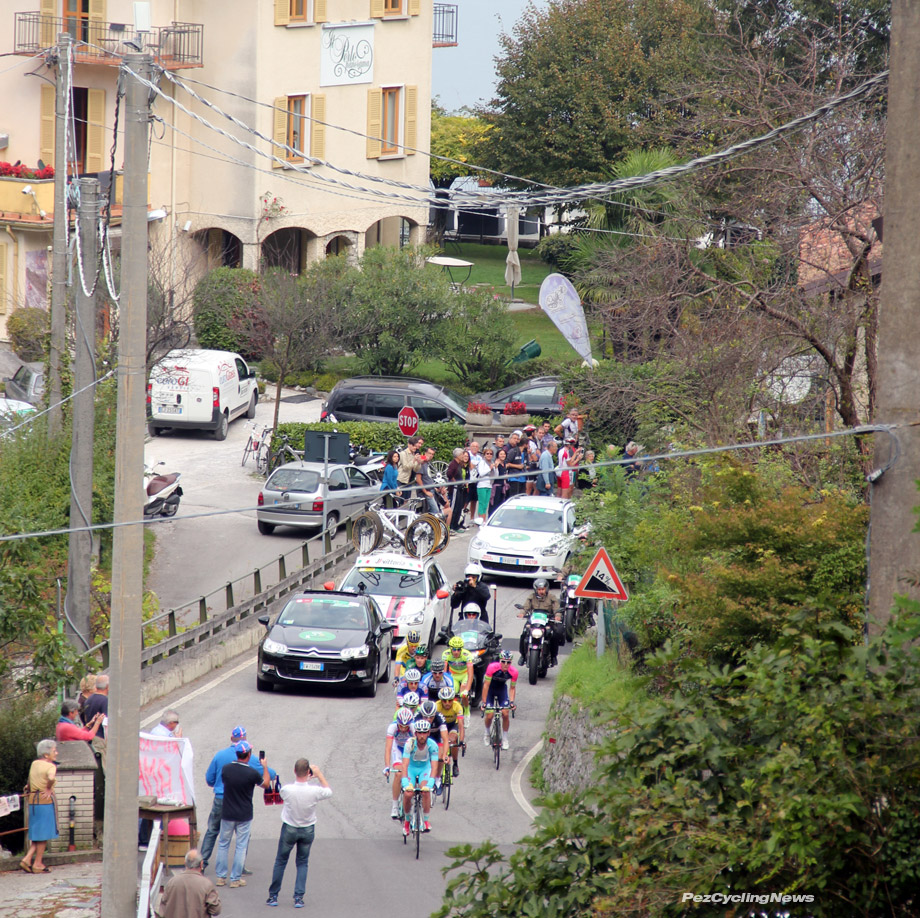 Next stop for us was the Madonna del Ghisallo climb, conveniently located on both sides of our hotel for the next couple of nights – Il Perlo. The early break came through much sooner than expected – minutes ahead of schedule. 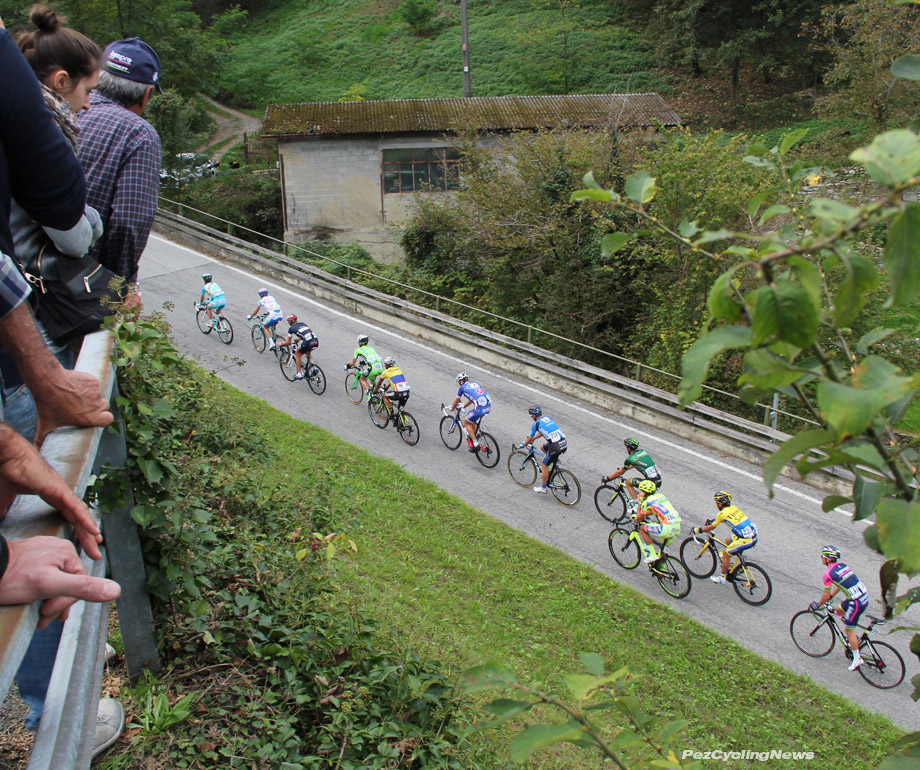 We barely had time to get the car off the course and find my shooting spot before they came through in a clamour of honking horns, chopping helicopter blades, and yelling fans. 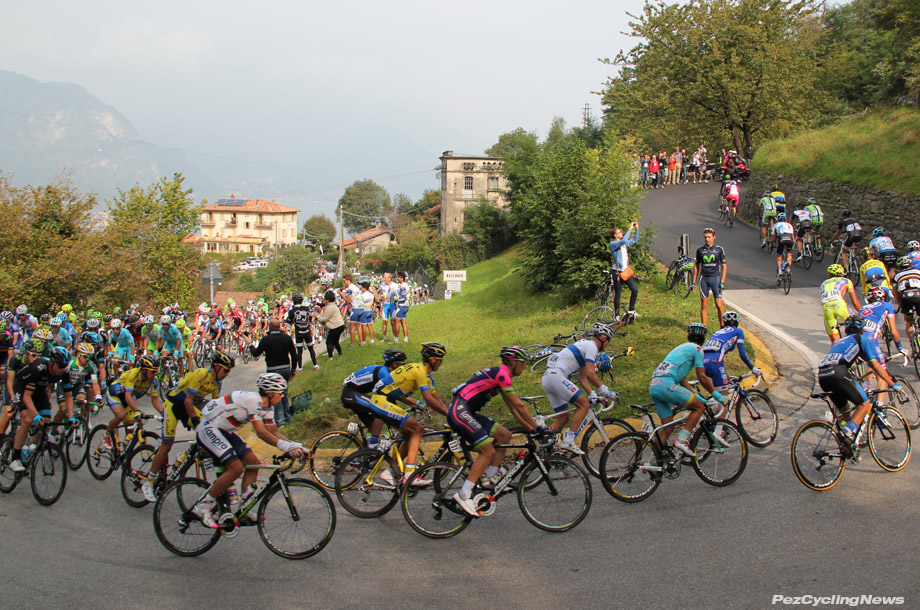 Many minutes passed before the main bunch showed up. It seemed somewhat fitting that the road climbed away from me and around the corner – since we won’t be seeing many of these guys until next year. 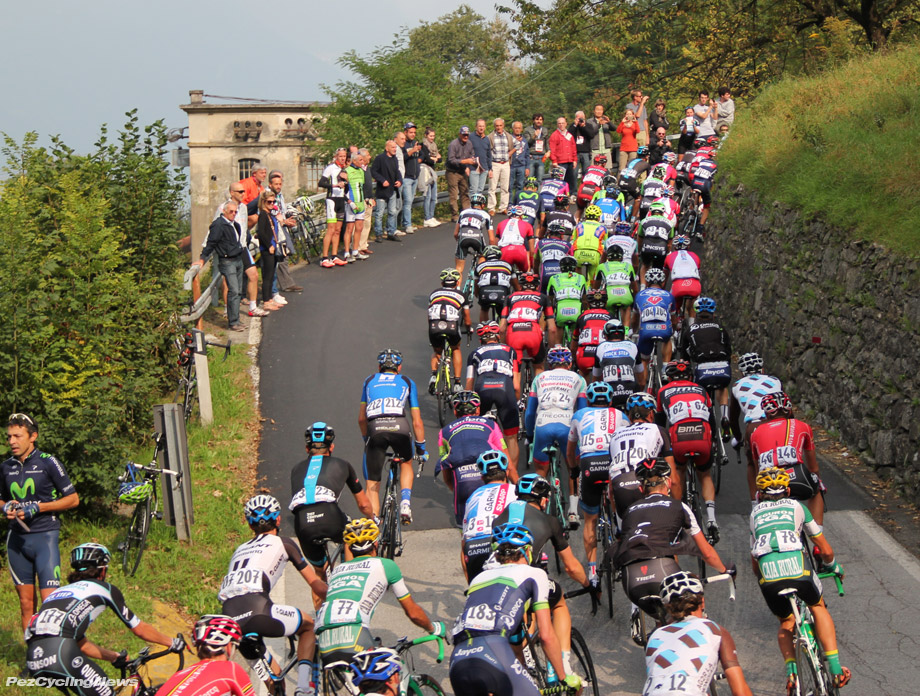 But since the race was only 58kms in, we knew we’d get at least one more chance to see them before the day’s end – so it’s back in the car and off to Bergamo for us. 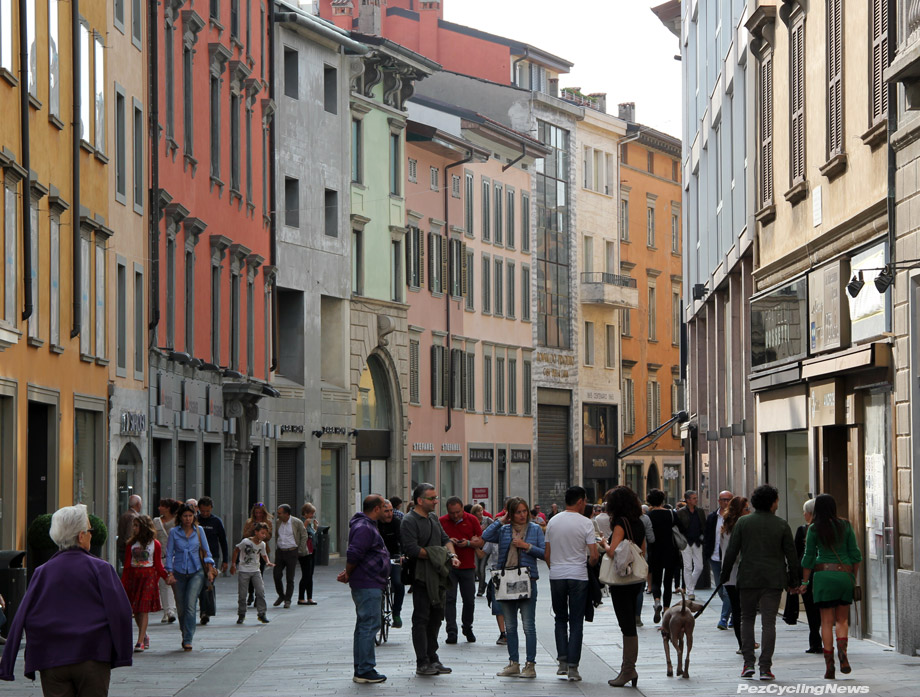 Getting around this region of Italy is never easy – it’s packed with millions of people, and a sunny Sunday is everyone’s chance to get out there and visit. After getting blocked on our way through Bergamo’s ancient walls, and actually making three laps around one block, we finally penetrated the fully locked down city center just minutes before the race arrived. We were so close in fact that we had to pull the car over the curb to get out of the way. 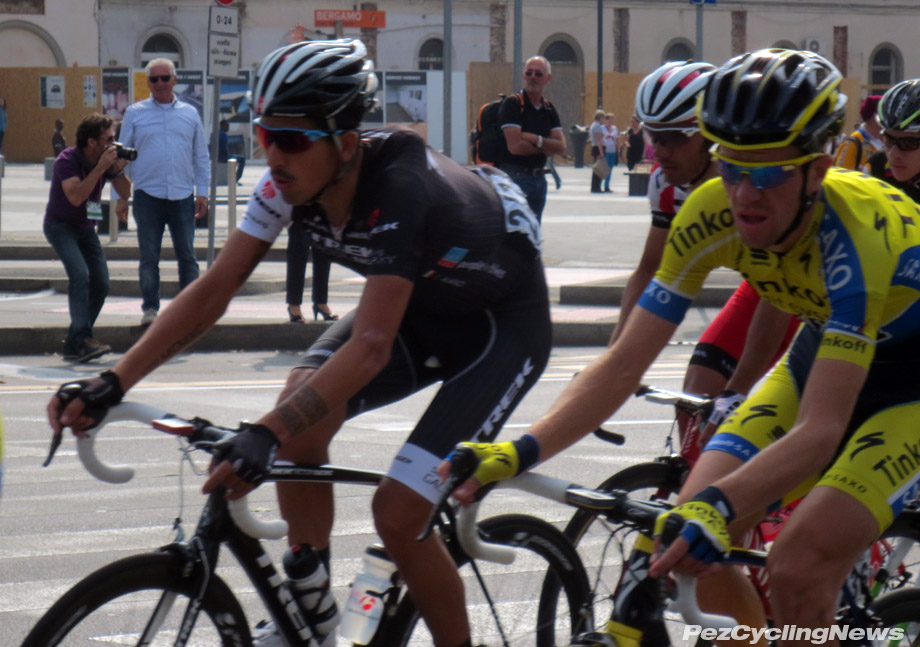 Check me out ‘on da job’ as the tranquilo bunch rolls through Bergamo. And a thumbs up from Mrs. Pez. 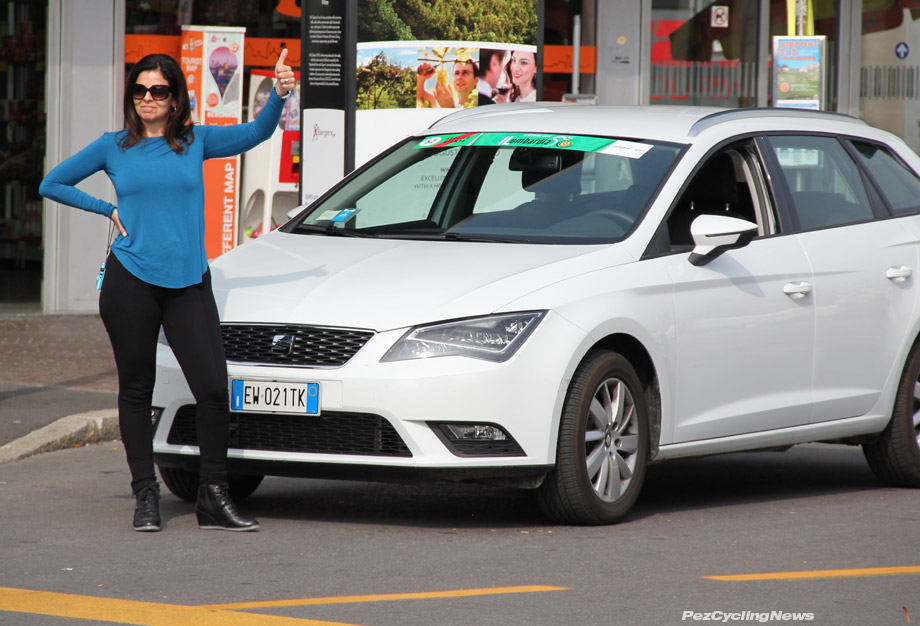 As the much set out on a long loop before returning to Bergamo, we had a chance to stroll past my old apartment from 1998 – yup it was one of those colorful ones. 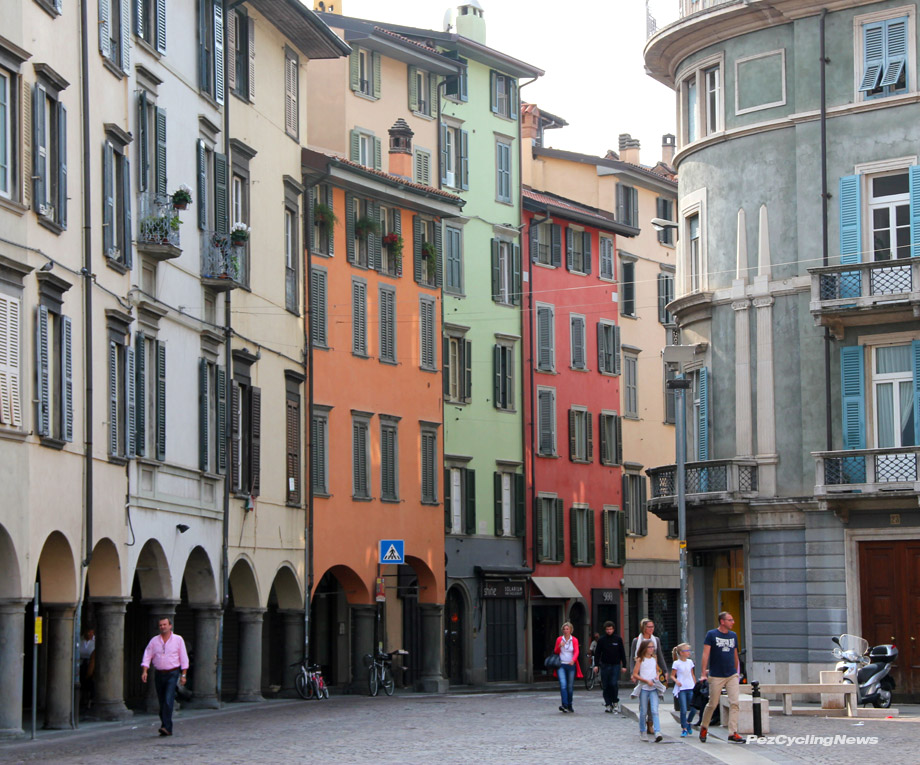 From here it was a warm hike up to the old town, Bergamo’s ‘citta alta’ to stake our claim on the day’s final climb, and expected launch pad for the winning move. 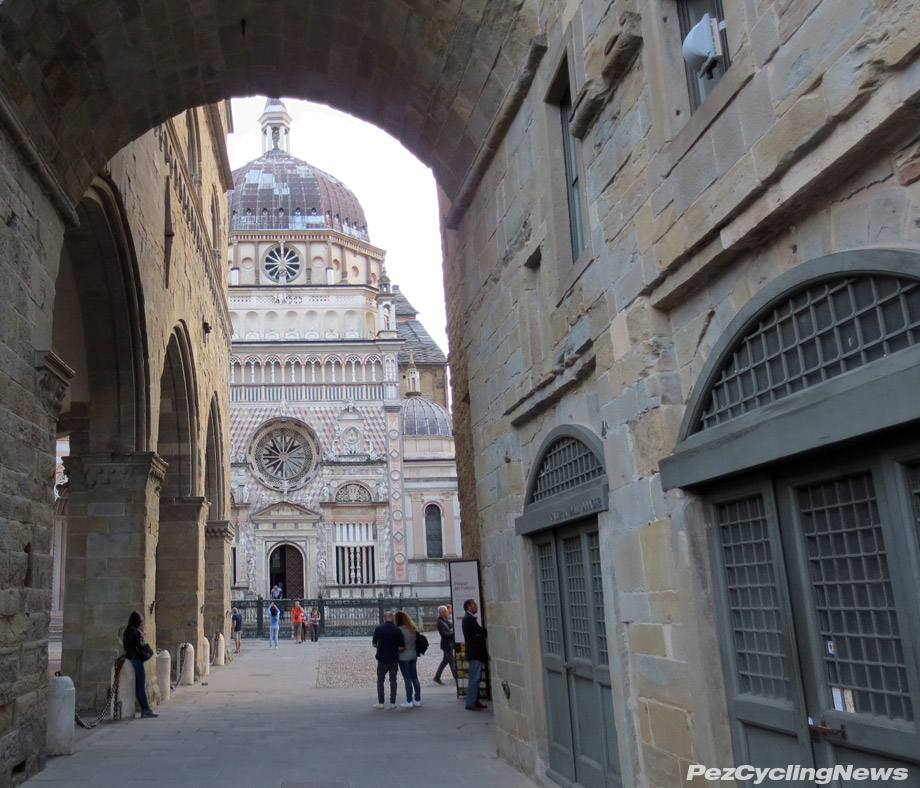 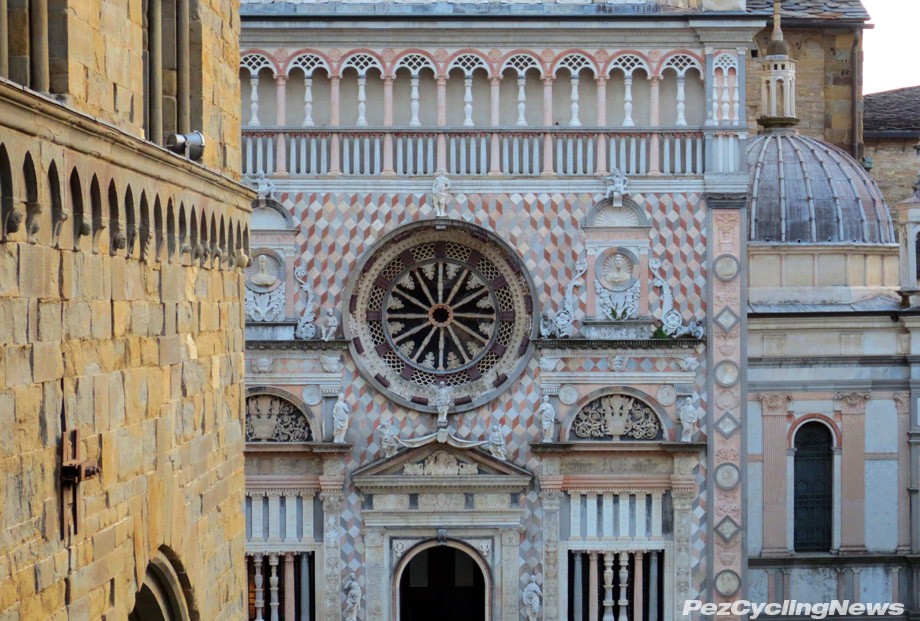 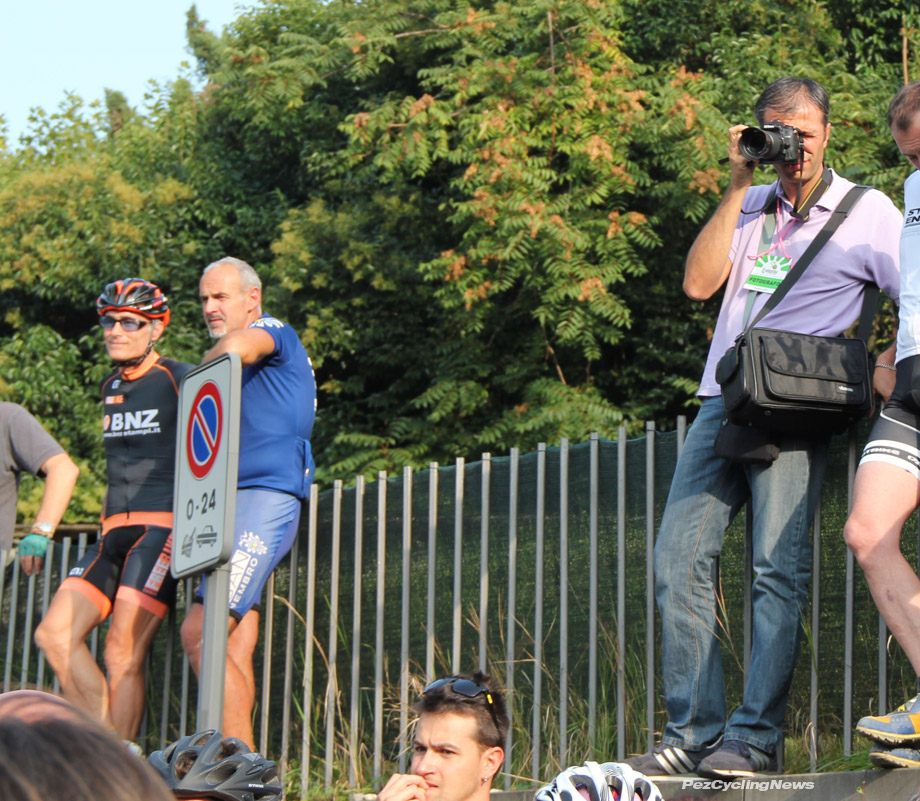 By this time my phone had died, and my extra battery and charger were safely stowed back at the hotel… full radio silence was in effect. But I still managed to find Ale as he clung to an iron fence above the first ramps of the climb. 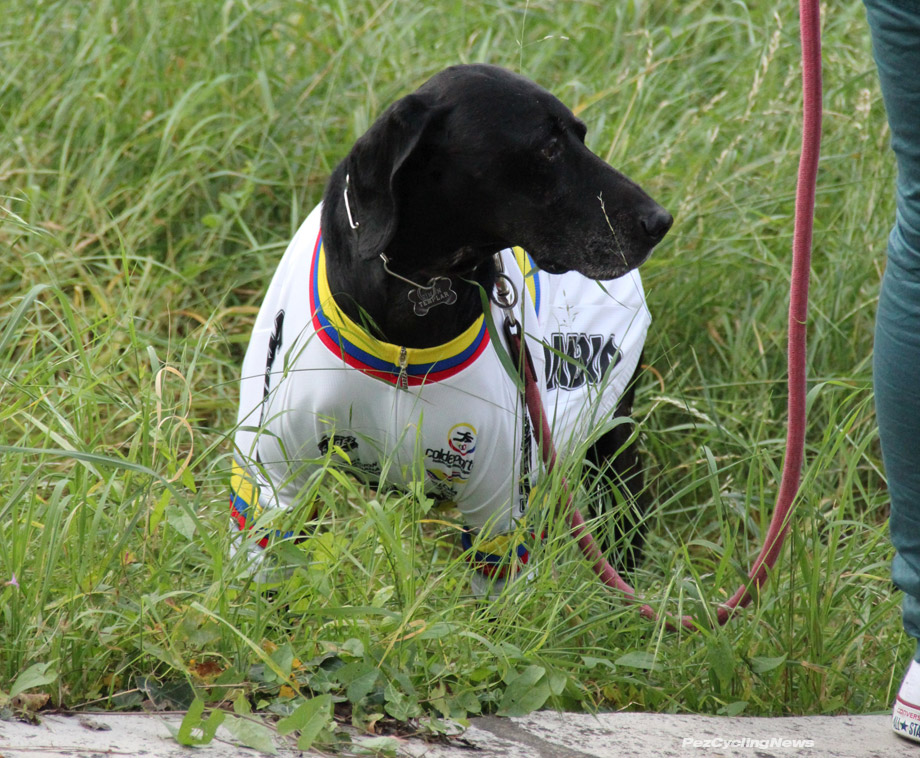 At last the choppers whump-whumped around the hillside, flares were lit and the gauntlet thrown down. 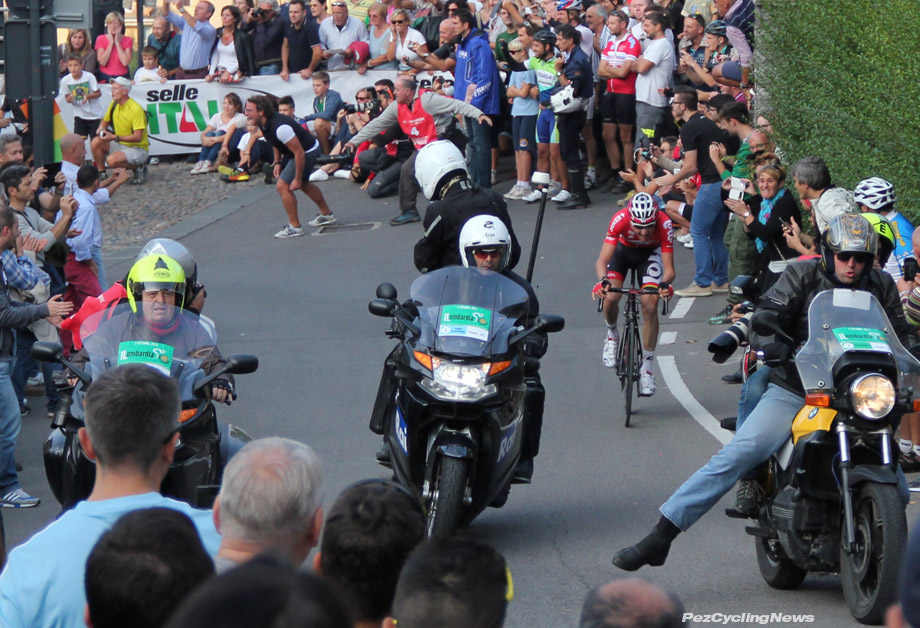 This vantage point is just after the roughly cobbled stone sections that start the climb to the top of the old city, and it was chaos as riders, motos, fans and photogs jostled for position. 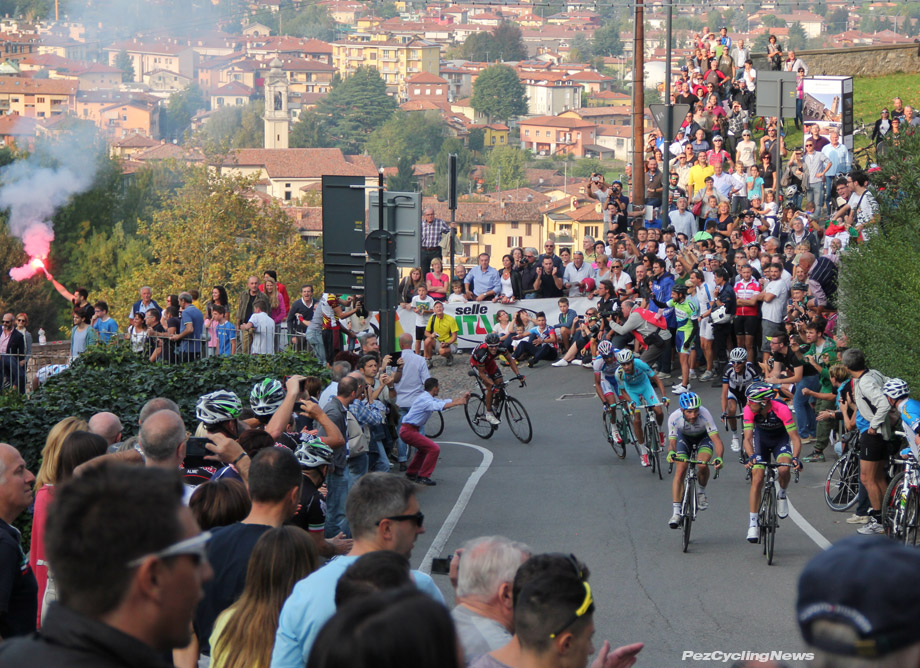 The main bunch passed in seconds, as it does. I was surprised how many were still in it, but even more so when World Champ Michal Kwiatkowski rolled by chaperoned by a couple of his OPQS lieutenants. 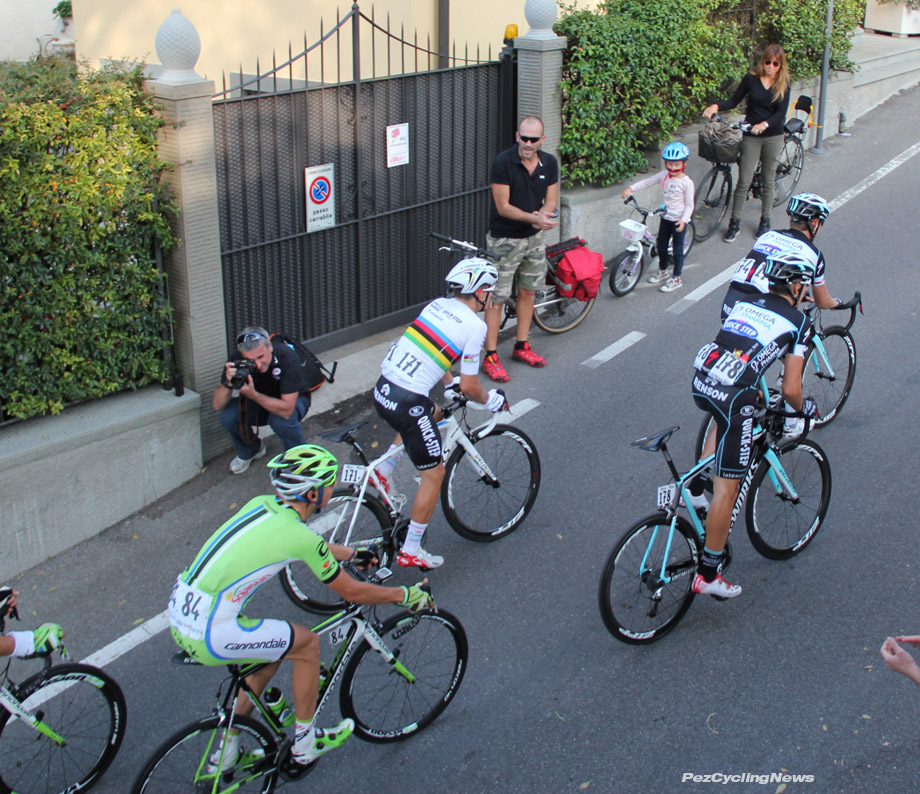 After a good couple of minutes passed with no riders at all, I realized there were some big time gaps as there was still no sign of the Fine della Ciclista car. By now fans were streaming down the course, but those who stayed were there to pay some serious respect to the guys who were suffering more than the rest, and determined to finish this race. 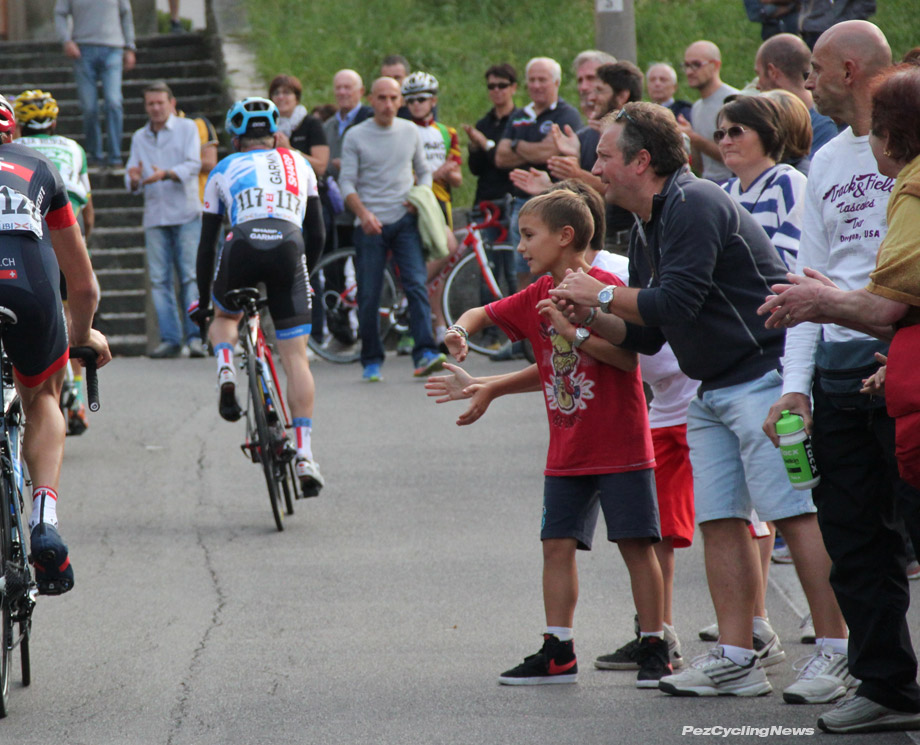 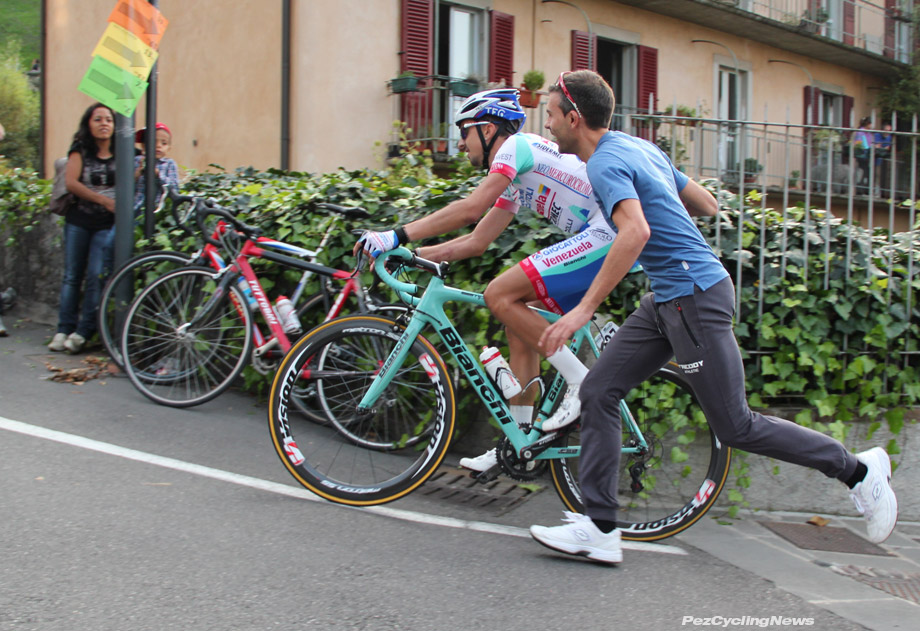 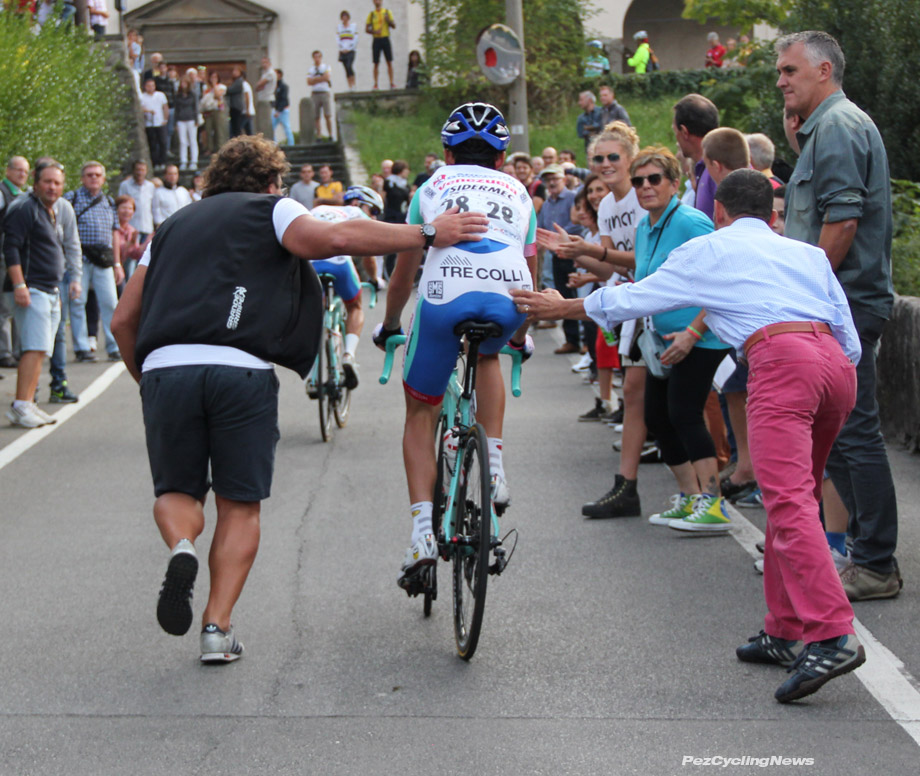 Finally, the last rider appeared, and might have had an easier time up the climb than anyone.  Meanwhile, that piazza back in the old town had the perfect bar to a post race cocktail. 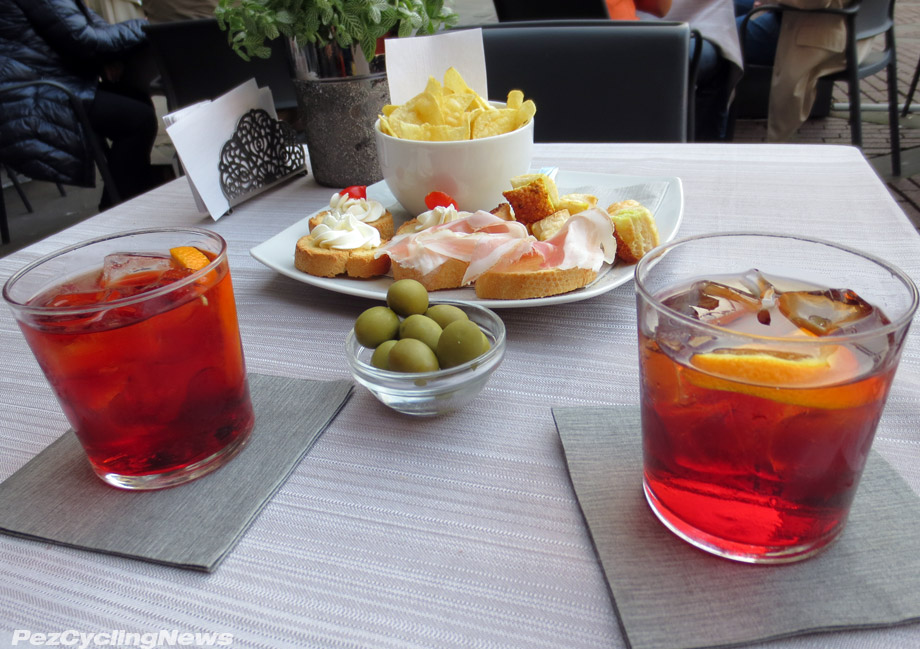 It was a fitting way to sign off the season, and one that reminded me how strong the cycling blood is in this part of the world. Seeing it with my own eyes reminded my why I love cycling so much, and was the icing on this cake of finally seeing Il Lombardia myself.