Roadside Report: Amongst the thousands of crazies roadside in the dust at Paris-Roubaix on Sunday was our own Lee Rodgers who was chasing the race with Velo Classic Tours. Seeing the Hell of the North live is a once in a lifetime experience and just like Lee’s ride across these hellish roads a couple days prior, this day was nothing short of ‘epic’.

The Charge of the Light Brigade, Alfred Lord Tennyson 1870 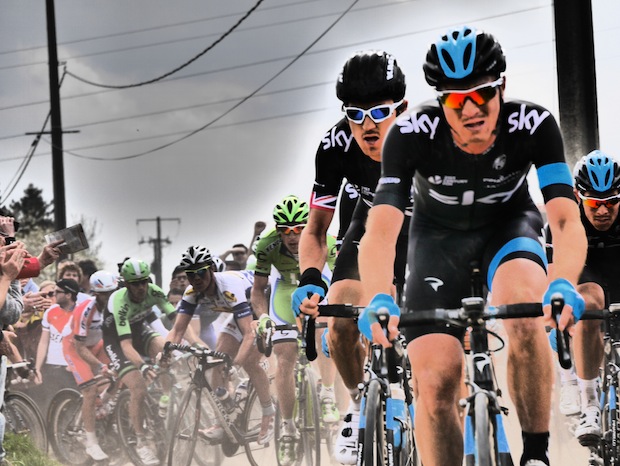 Sky lead the charge over Section 18

When the heaving, dusted peloton arrived we felt the rush of displaced air sweep over us, frosting everyone and everything in its path with a fine covering of earth.

180-odd cyclists riding knuckle-to-arse along a 3-meter wide stretch of cobblestones on a bone-dry day in a bone-dry week will have that effect. The dust stays in your ears and along the rim of your eyelids for hours seeping no doubt in miniscule portions into your blood as too does the clatter and clamor of those bikes and the rattling bones encased in the shaken flesh of the men who force them ever onwards.

Roubaix, with you forever. 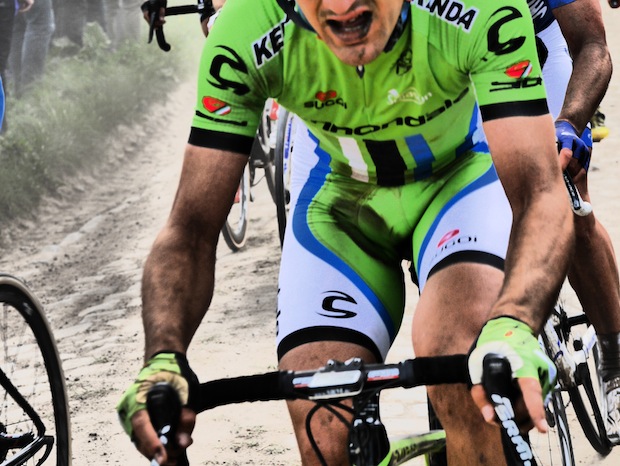 The grime gets everywhere

Tangible too is the brooding intent of this thing they call a race. The summation of the violence inherent in Paris-Roubaix, in its pave sections and in its masculine brutality, in its destruction of man and machine, hope and dreams alike, you feel it everywhere.

There are no friendly words exchanged here in the pack, no talk of deals, no kindness extended or favors repaid. Not here.

This is not a bike race. This is much more important than that. 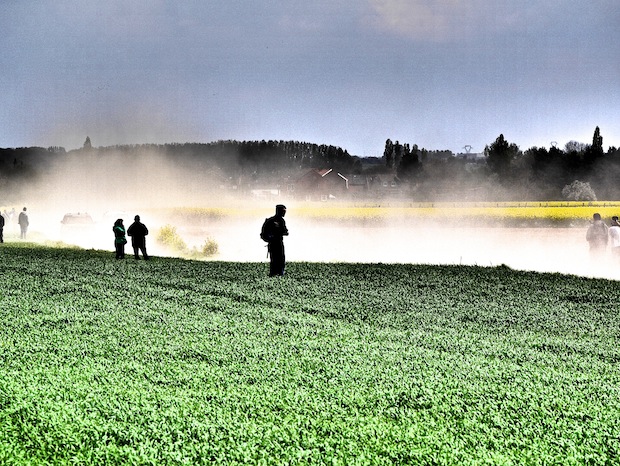 They say the sport closest to cycling in the demands it makes of its participants is boxing, and if that is true then Paris-Roubaix is the heavyweight championship of the world.

It can at times be a chess match of jabs and forays designed to probe and expose weakness but more generally it resembles a one-stop house of pain where a single punch drops the pretenders to the throne like stones in an ocean. 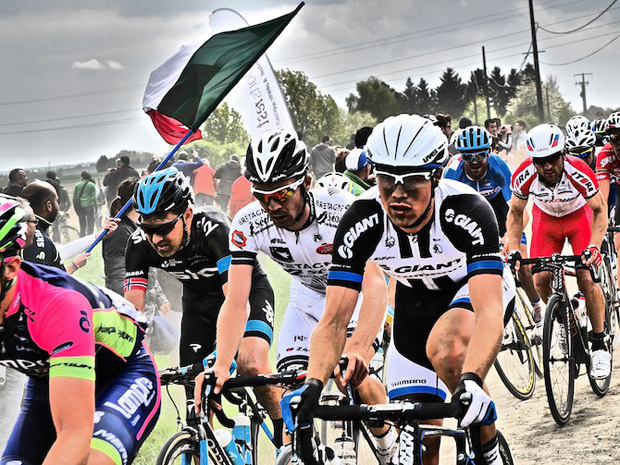 Standing by the roadside at Sector 18 as the breakaway came through was thrilling. Frenzied butterflies in the gut, hair up on the neck, grown adults dancing about like little kids needing to pee but having too much fun to do anything about it.

There was such a menace to the whole affair that you got the immediate impression that the men up the road weren’t merely racing towards a line on a track in a velodrome in rundown Roubaix but that they were escaping the embodiment of their deepest fears.

The peloton frothed and snarled with the scent of blood in its nostrils, the plume of dust sent up behind it signaling to anyone ahead that something wicked this way comes. 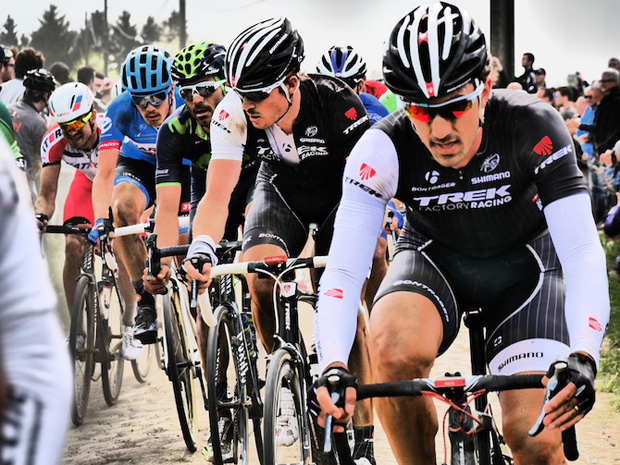 Cancellara’s face was a picture of composed and malicious intent. Wiggins could not have been concentrating more had he been performing open heart surgery. The front men rode as best as they could manage in their color-coded units, safer by bare degrees to be riding with those they trust over those miserable, beautiful rocks. 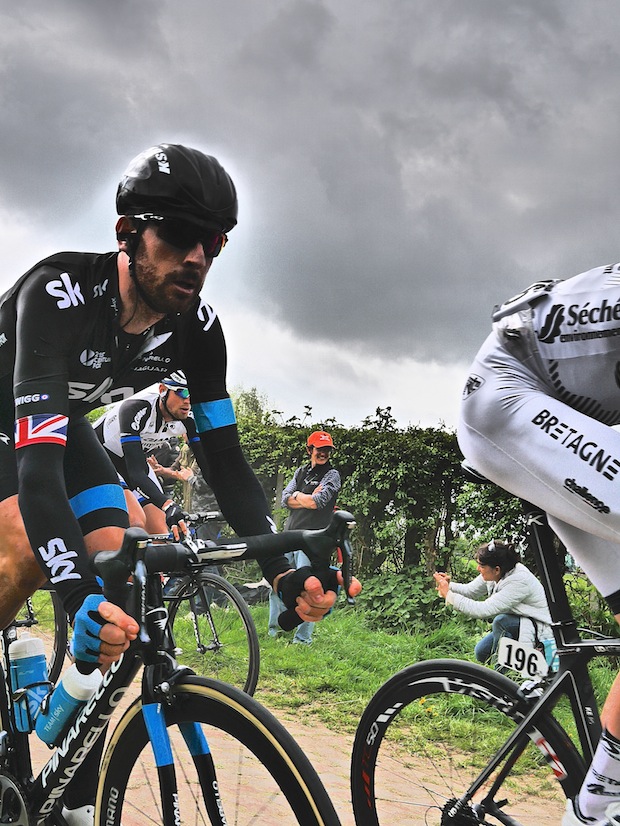 Those further down the line took their chances and trusted to fate, God, or both, half shutting their eyes to the dangers that lay below. The errant cobbles lie deep below like lions in the grasslands, waiting to pick off the lame or the old, the unfocused or just the plain unlucky.

One soldier fell by my feet though he was up and at ‘em in lightning time and chasing back to the fray to offer his body and soul once again up to the cycling gods and their minions, we, the frenzied public. It’s as if they practise falling off and getting up again, just for this day. They go down and bounce back up in a heartbeat.

And how the crowd cheered, they opened their lips and out from hungry bellies came guttural roars, from which the discerning ear could note a heady mix of fear, love and a lust for power, glory and suffering.

Are we any different than the citizens who bayed for blood in the ancient coliseums of the Roman Empire? No, we most certainly are not. Thank whoever you want for Paris-Roubaix because it allows us to reconnect to those sensations. It takes us out of ourselves, we who love this crazy, individualized and often lonely sport.

There are other races of course, and some are incredible, steeped in history and tales of great courage but Paris-Roubaix is all that and then some. Hibernating for some 364 days a year, on this Sunday in April it comes to life with a vengeance. 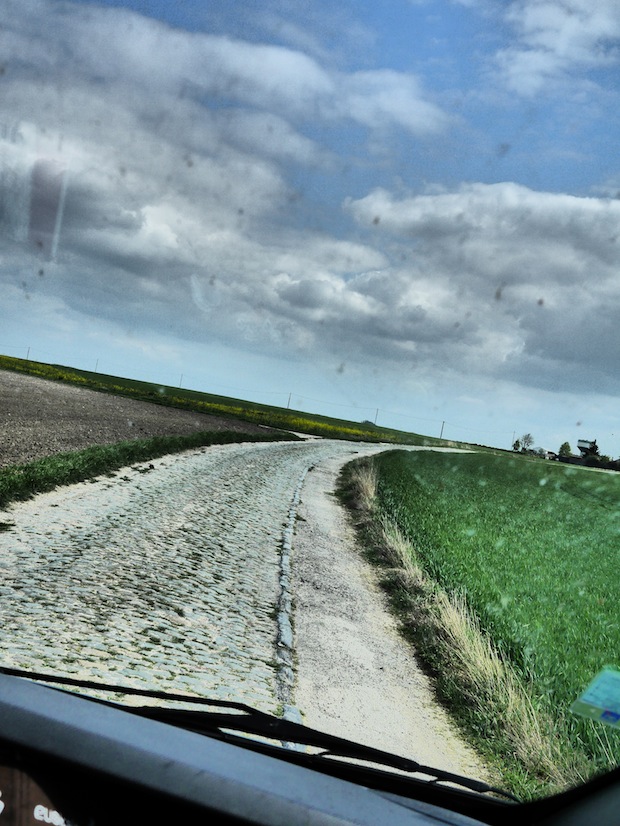 80km/hr over these? Crazy, scary fun.

With the race gone on its way to the Arenberg, we ran back to the cars, weaving through hundreds of other spectators to speed away to Sector 10. One hair-raising zip through the incongruously sun-bathed farmland all around us (and God help you if you are on the roads at that time and not a cycling enthusiast and a slow driver, because 100 horns will descend upon you along with curses that would shame a sailor), we arrived to our beer-filled VIP tent, replete with widescreen TV and a cast of Boonen loving Flandrians for good measure. 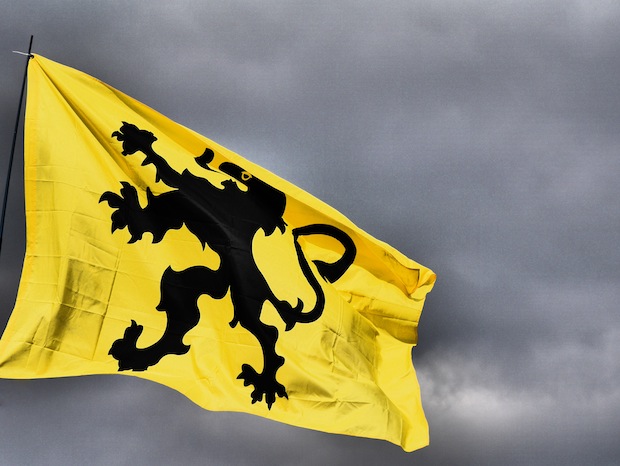 Being as watching bike races is thirsty work, beer was liberated as the kilometers counted down. Watching the action on television and knowing that in just 2km the leaders would be outside the tent itself was a surreal feeling.

Movistar’s Alex Dowsett also happened to be outside our tent, out of the race but sent by his team to stand by the roadside with spare wheels. He did not look too thrilled at that, has to be said. 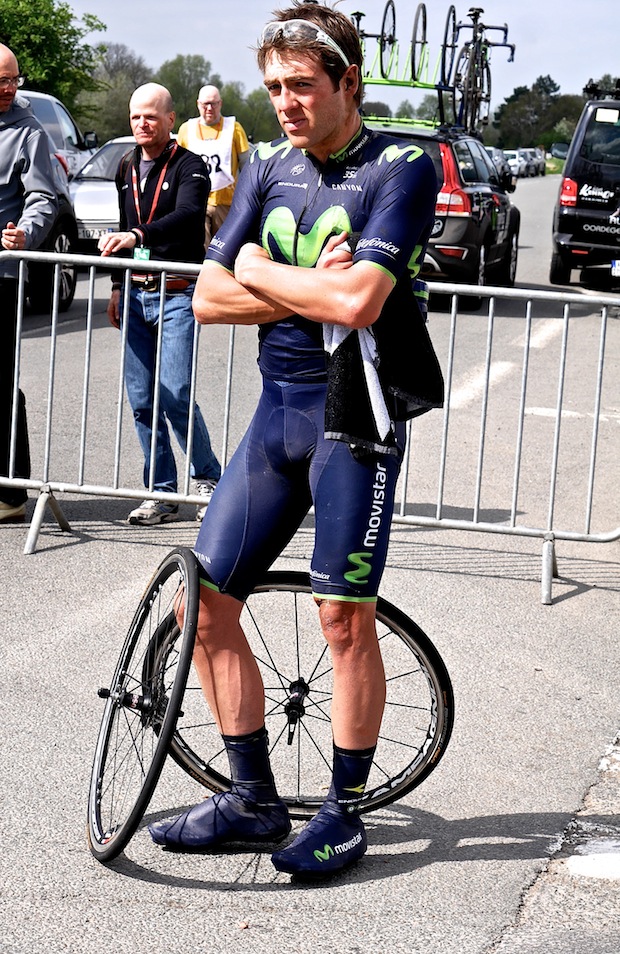 Cheer up Alex, could be worse, you could be riding…

“They’re coming! They’re coming!” went the shout through the crowd as the helicopter and the convoy of cars signaled the imminent arrival of the two-wheeled warriors.

Bang on the front was Thor Hushovd still resplendent if mucky in his Norwegian national champion jersey, with Boonen quick behind, about to put in an attack that would, along with several other lung-bursting efforts, ultimately cost him the race. 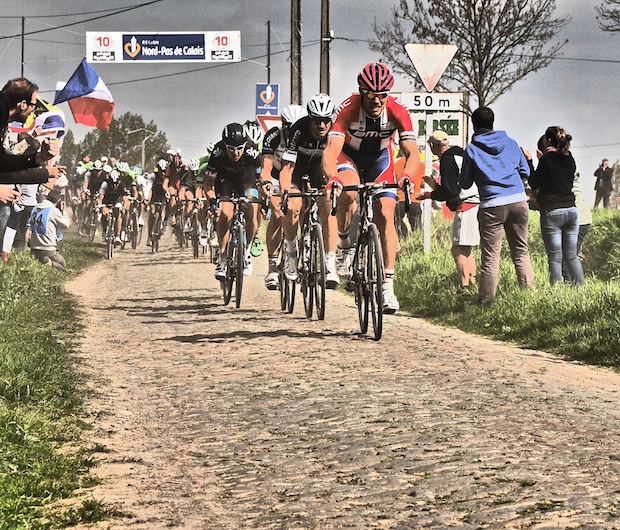 Thor at the front, Boonen lurking

Amongst those who can win Paris-Roubaix there is a very similar look on their faces. They look so calm, as if this is what they’ve been waiting for all their lives. It’s one day a year, it is the greatest bike race in the world, and they are as close to mastering the unmasterable as they may well ever be.

And even if they are not, they have to believe, until the last possible moment, that they are.

Hushovd, Sagan, Boonen, Cancellara and yes, Niki Terpstra, I saw that look on each of their faces. The other thing to note is how big these guys are, something that doesn’t come across on screen. 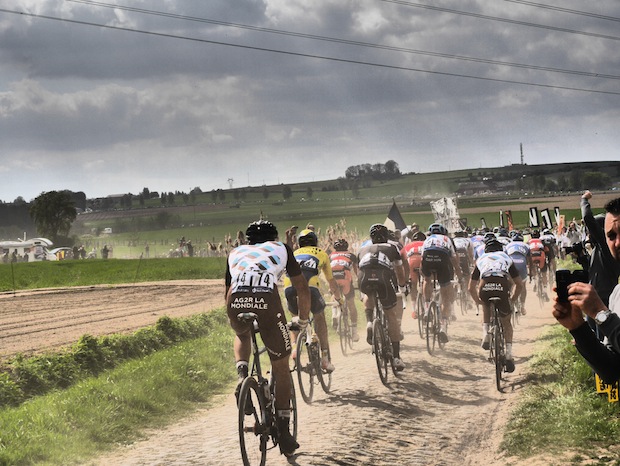 To be small and to win Paris-Roubaix you need indefatigable will and uncommon strength, but invariably the winner is not petite. Those cobbles sap every reserve of power from the unprepared and leave nowhere to hide once their cumulative effect begins to expose weakness.

Drafting has a greatly reduced effect on the pave sections which is just one more reason why this race is so hard.

Back in the tent the Flandrians downed ever more beer and began to sing songs in praise of Boonen but it was having little effect. Old Tommeke was tired by the end for having done too much work, and whilst the non-Belgian amongst us desperately wanted to see that amazingly elite group enter the velodrome together, Terpstra had other plans altogether. 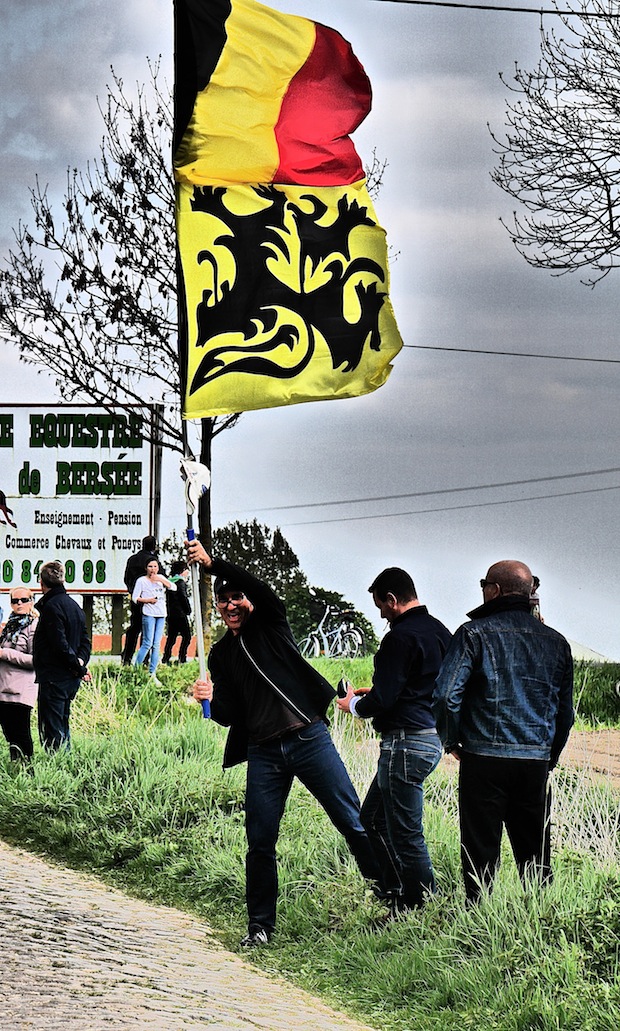 It rang hollow. We’ll have to wait at least one more year to see Roger de Vlaeminck outdone.

We packed up the food and empty bottles, clambered into the van and headed back to Gent for our last night on the Velo Classic Tour. Tired, dirty and more alive than any man rightfully deserves to be, the previous 12 days ran through my mind like a film. 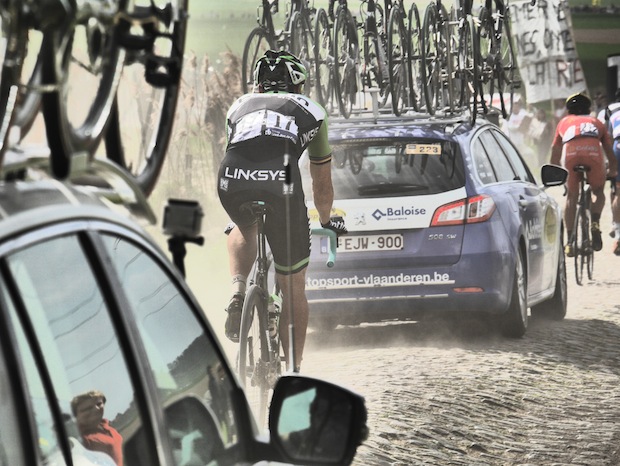 I’ve been to the mountain, and I’ve seen the promised land. If you ever need directions, just let me know…

Lee followed the Hell of the North, The Tour of Flanders and more thanks to Velo Classic Tours

Register for Entire ToAD Series – Save 10%