Chasing a bike race like Milan-San Remo is an action packed, non-stop adventure that rewards you with only a few seconds to glimpse the riders, but a lifetime to enjoy the experience. Here’s how PEZ-Man Ale Federico spent two days last weekend… chasing San Remo.

Why do you have to leave your home, cover more then 1200 km in two days, endure cold and rain and miss your favourite race on TV sitting inside your house while your wife prepares for you a coffee? To see ‘the SanRemo’ of course! 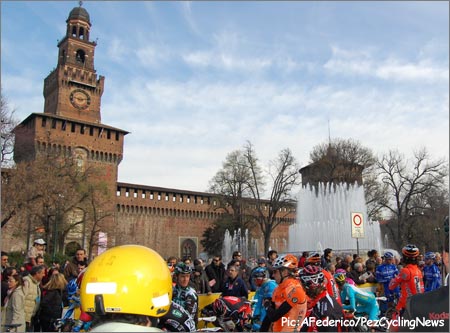 It was the summer of the 1990 and I was sixteen years old. I was already in love with cycling and my favourite rider was, at the time, Gianni Bugno. The Tour de France was rolling on the French roads and every afternoon, after watching the stage on TV, I moved upstairs to my personal “press room”. I imagined I was there, in France, following the Tour and I wrote down my impressions and my prediction for the next day. My works of that summer never left that room.

Since that time I realized that, for me, it was more important to tell someone else about these races than to just enjoy them myself. 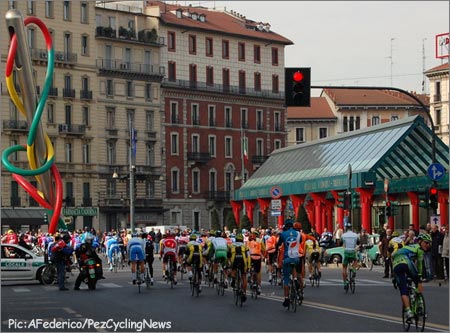 • Km 350. Milano, the same day. I love Milano. Milano means work. Means opportunities. Means also fog but today the sky is blue, same like on the Alps. I park out of the city and use the metro, in a few minutes I’m in front of the Castello Sforzesco. The ”great” as the Milanesi call it. The Press Room is located inside; wow. The RCS big boss Mr. Zomegnan this time makes it in style!

• Km 360. Binasco. The secret is to find a hotel out of the city, you can save some money. The night before the race is always very busy. I have to send the preview to PEZ. I have to plan for tomorrow. Again make the calculation of the time I need to drive from the Turchino to Varazze and try to sleep. The dinner? A fast burger in a fast food. Am I here for cycling or to eat? 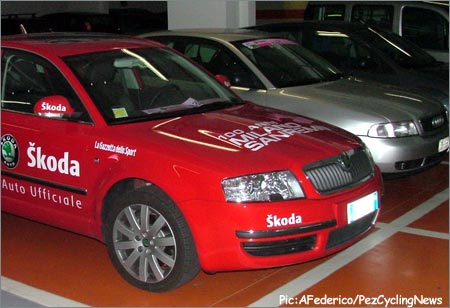 VIP Parking – that’s the mighty PEZ-mobile just behind the Skoda – watch the doors!

• Km 370. Milano. Saturday 24th March. The Day. It’s early but there are a lot of people around the Castello Sforzesco. Some curious, many Tifosi. Soon the team cars and the motorhomes start to arrive. One of the first is the Liquigas Team. There’s Pozzato’s bike that has a special paint scheme. Designed for this race to remember last year’s win. But no Pozzato around. Come also the others, one by one. I move near the Quik Step team. Too many people. Too many people around the Milram cars too. 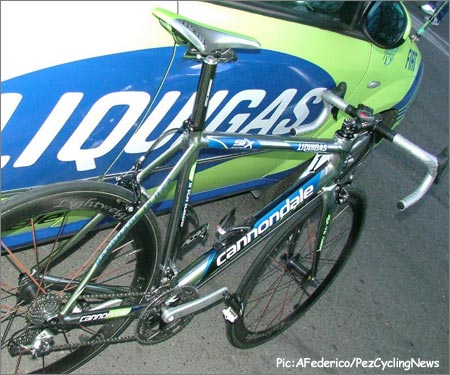 Beside me Schleck. “Hei Schleck few words?” “Si, ok, parliamo” he answers in Italian (my accent should be strong – I think). “This is not exactly my race, I understand it last year when I tried on the Poggio but I wasn’t able to make a big difference. This year targets are the same as last one. North Classics and the Tour”. 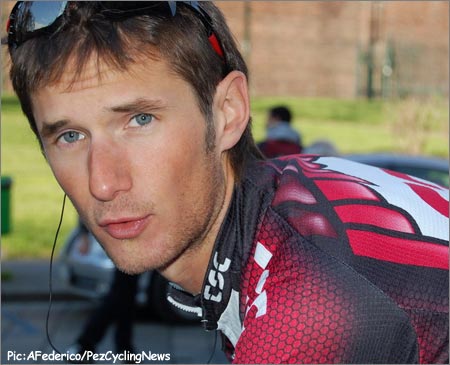 I move again to the starting line that is now crowded. Bettini smiles and jokes about his accident occurred during the Tirreno Adriatico. Good. It means he will do a good race. Freire smiles too. There is Zabel surrounded by many people. The Milanesi love him after his 4 wins in this race. Boonen is one of the most wanted. Same like Petacchi (who never smiles). If you look at him you could think he is going to have a bad day… but he’s always like that.

Ale-Jet gets a little advice from his wife Chiara.

• Km 380. Binasco, again. This time is for the race. The traffic is stopped by the cops. Some people complain some others look curious. The fun stays in the fact that once the bunch approaches at high speed everybody’s on the road to look and to enjoy. 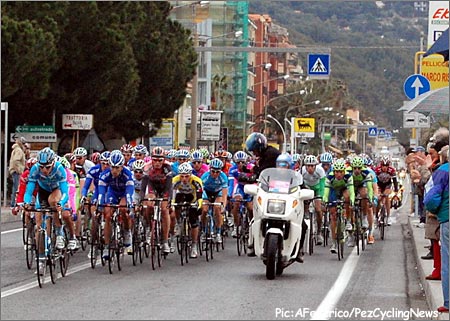 • Km 450. Tortona. Other town. Other traffic, other people. A guy comes to me asking how many riders take part to the race. “Just two hundred? I supposed at least the double!” On our left the same guy steps backward and says “Hey but here is very dangerous too!”. 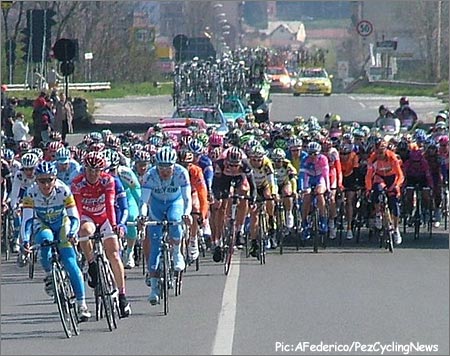 • Km 510. Gnocchetto. The countryside here is beautiful. The forests in the Appennines start to wake up again. In this portrait I have to quarrel with a madam who complains that I parked my car in front of her way out. The road is narrow and I cannot park in other place. Once I decide to move the car, two cops approach me with the motos and order me to don’t move it for any reason. There is a break. I’m not sure if they are six or seven and I have to control my pics to count them. Seven minutes on the bunch. Nothing special. One year Convalle (1992) had more then half an hour. 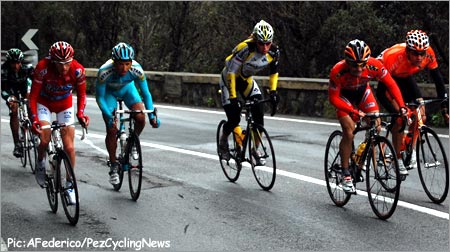 Sun at the start turned to rain on the coast.

• Km 540. Varazze. Here it rains. What is this, the Sanremo–Milano? Usually the weather changes from the rain to the sun in this race! Here starts also my race inside the race. All the roads are very well controlled and closed and I have to invent special shortcuts to see more passages. This thanks to my good knowledge of the Riviera (I was born here) and some research using maps and the satellite views you can find on the web. Starting from tomorrow I will look to add another ‘secret’ passage next year. The six are always ahead still riding fine. The bunch doesn’t reply strong in this moment. 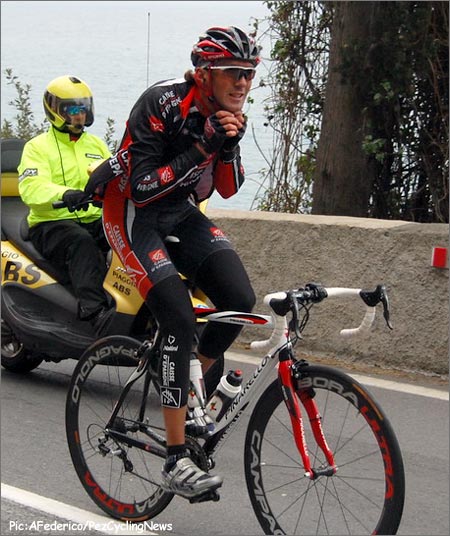 Time to bundle up… or seek the warmth of the bunch.

• Km 620. Highway, Borghetto Santo Spirito. Damn! A terrible accident in front of me. A car sits on a side. The accident is just occurred and it’s not well advised. I look with fear in the mirror to the cars approaching my back. One, two, three, four, has gone. Better leave the highway because probably it will be closed to remove the car.

• Km 650. Andora. Still raining. Cold wind too. Like a Northern Classic. The riders in the break are just four. In a while the bunch approaches at very high speed. It uses all the road and it’s really a great show. Short but great. 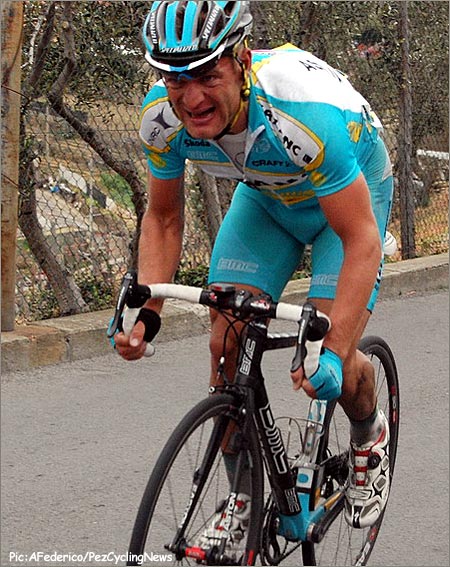 Matthias Kessler reacts to Ricco’s blistering attack on the Poggio.

• Km 690. Poggio. PEZ calls me from Canada. But I’m late on my timetable. I can’t talk and I leave; I arrive on the top climbing from a terrible (for slope) small road. The race is arriving, I can hear the helicopter, and the people are watching the portable TV. Popovych is ahead. Sometimes I listen to news while I look for a good place for the pic. 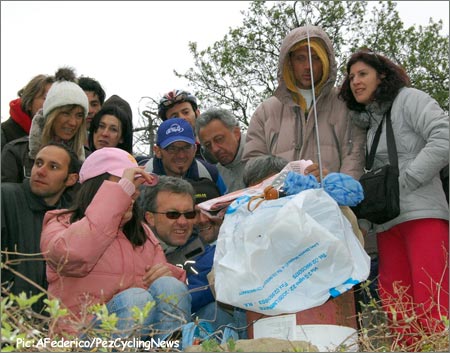 Bring your portable tv and set up camp on the Poggio.

Where’s a good place? Be careful, the Poggio is very dangerous for an amateur. Cars, motos, pro photographers, Tifosi. “Kessler, Kessler, no, Gilbert. No Riccт it’s Riccт attacking!” I can see them. Riccт as promised and a surprising Gilbert. Then Kessler, then I can see Bettini, then Petacchi before all the other sprinters. 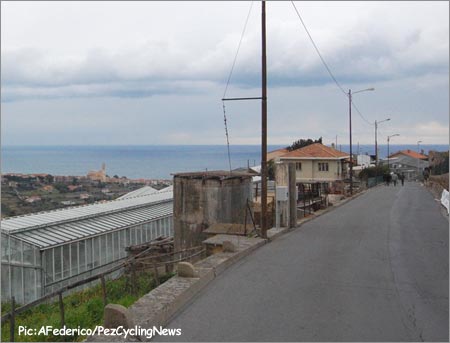 After ten minutes the Poggio is back to a lonely remote country road and you never can guess that is one of the most important place of the World Cycling. 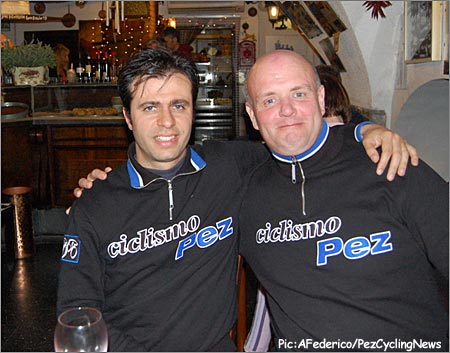 An Italian and an Scot walk into a bar… Can you guess who is who? Too easy… how about the name of the bar and what they ordered?

• Km 700. Sanremo. Its 18:00 and I still have to download my pics, work on them, contact PEZ and send. Before I go to the Freire press conference. He speaks about the race, about his health problems, about the future, about the uncle to whom is dedicated the win. Once sent the pics I can finally meet our other PEZ-Man Mr. Hood who’s waiting for me for a drink since one hour! Some words, a nice pic together, my regrets and back to the car.

I drove all the day. I found rain. I took cold. I didn’t see the race except of few fleeing moments. I didn’t eat for all the day except for a fast dinner on the way back. But I’ve been there and now it will be so difficult to sleep tonight!