Roadside:  I’ve been fortunate to see the Tour of Flanders in person and ride the famed Belgian cobbled bergs on more than one occasion – and as we plod into a 2nd year of locked down travel, a look back at happier times might serve as a look ahead to what’s coming when travel opens up.

I’ve updated my day from the Tour of Flanders in 2012 with new big photos from an amazing day. 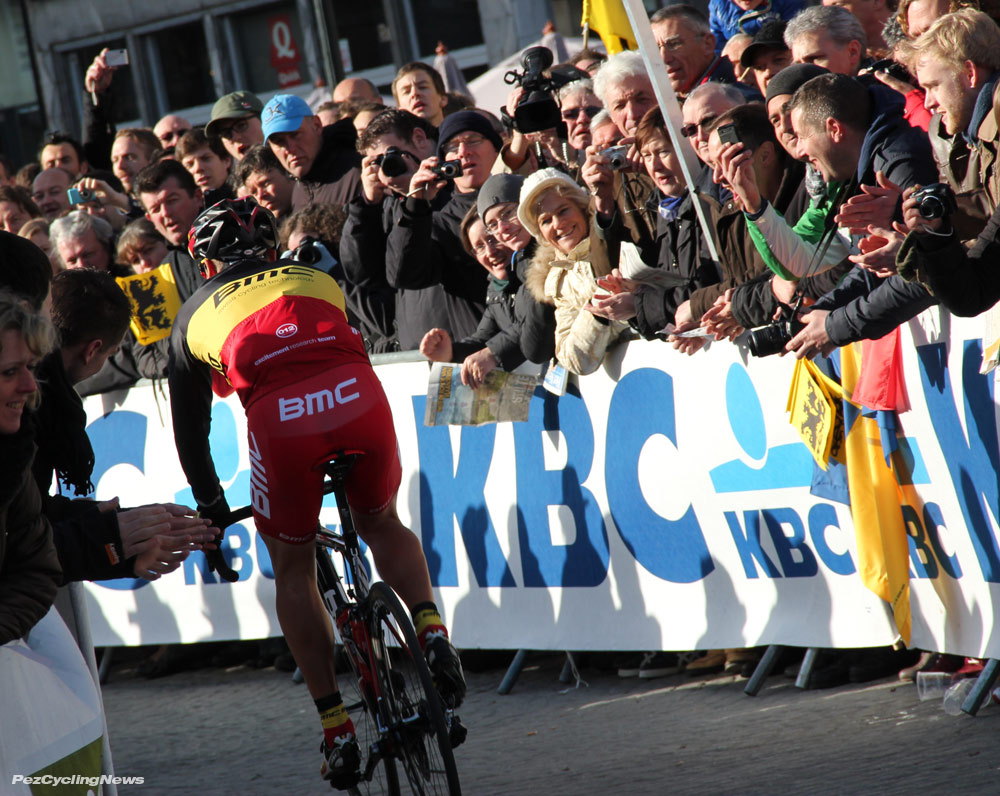 Getting to the start early to grab one of the few barrier-side spots pays off when the big names speed past for sign in.

PEZ-Fans will know Velo Classic Tours from reading about the experiences of myself and many of the PEZ-Crew as we’ve joined up with Peter Easton and his own crew to see a Belgium many folks just dream about in the pages of their fave cycling mag. 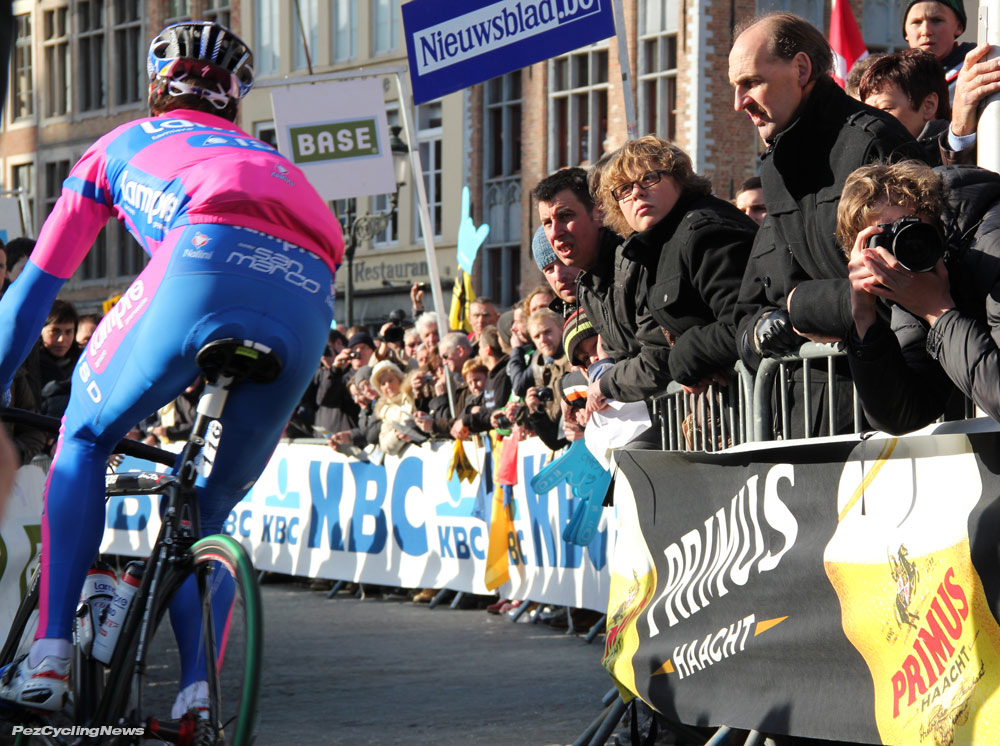 Over those years we’ve joined Pete on several of his trips, and as his own efforts and experience have guided his tour company through its first 10 years, it’s rewarding for me to be back and enjoy the fruits of Pete’s years learning the best ways around Belgian roads, and doing more to make his trips – and his guests experiences even better. 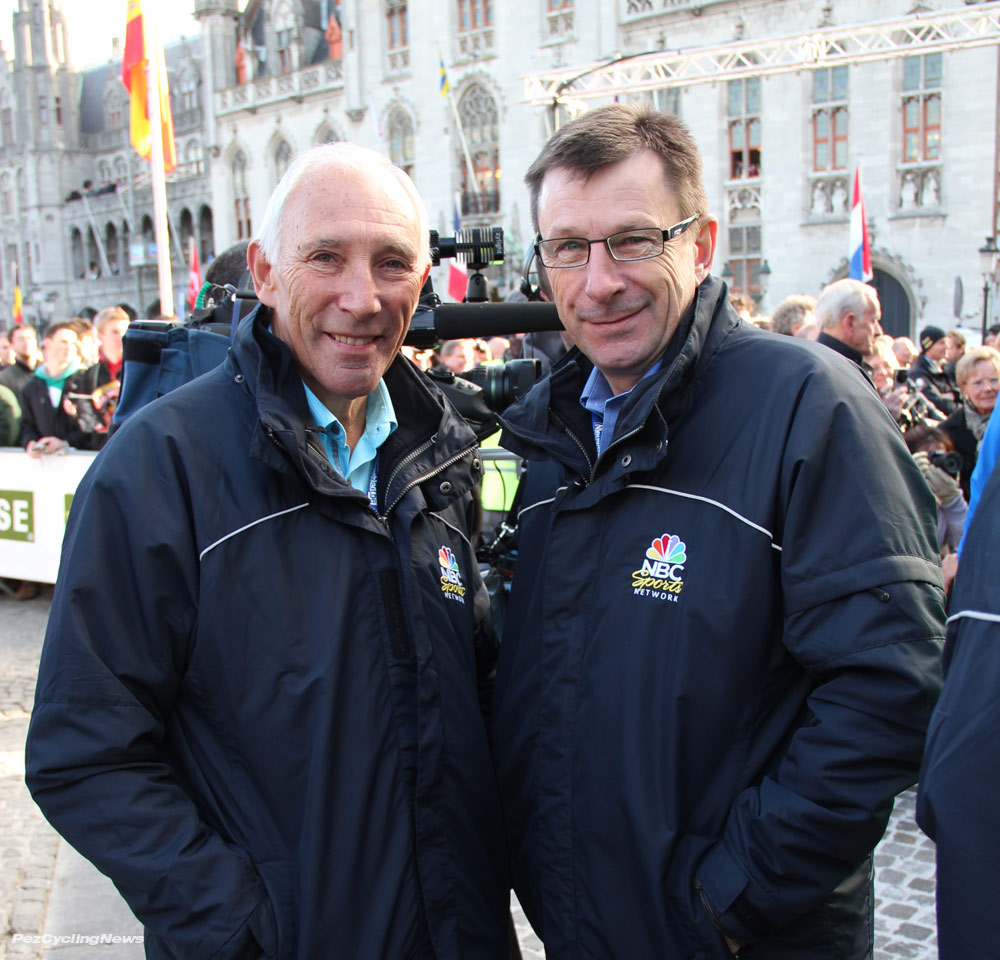 Phil & Paul had a big hello for PEZ fans.

Pete’s no slacker, and true to form the plan was to head out onto the Flanders course straight after the men’s start in Brugge at 10:00AM Sunday morning. With the race even more popular than before and the much anticipated showdown between Cancellara and Boonen hyped like mad in the press, plus a course design that allowed for more race viewing but less chasing – the crowds were expected to be massive. And if you don’t know your way around, that can mean valuable time lost while stuck in traffic, and missed race viewing… 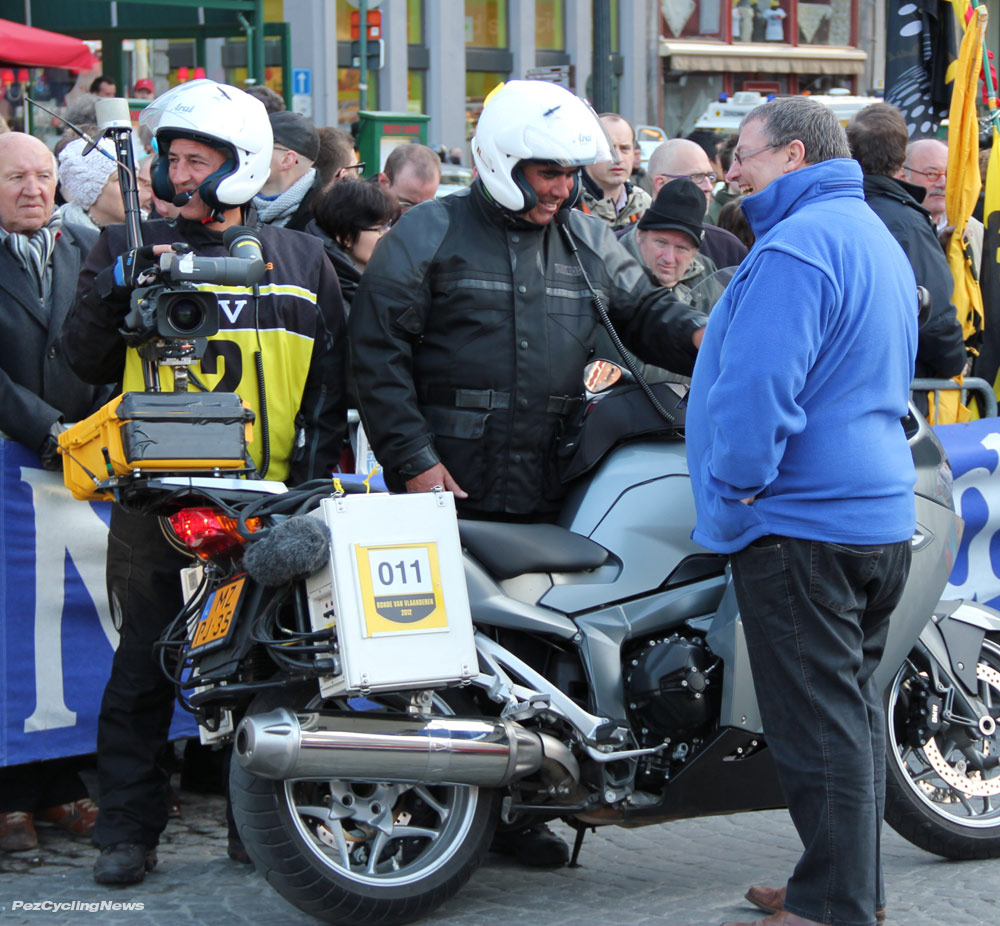 Everybody’s in a good mood at the start.

The only way to really see this race is with someone who’s been here a few times before and really knows his way around. So like a bunch of giddy school kids, 8 of us jumped into the van and we were off to chase Flanders with Velo Classic Tours. And here’s where Pete’s learning to drive on the streets of New York City really pays off – sometimes you just need to pass that guy who’s holding everybody up… safely of course. 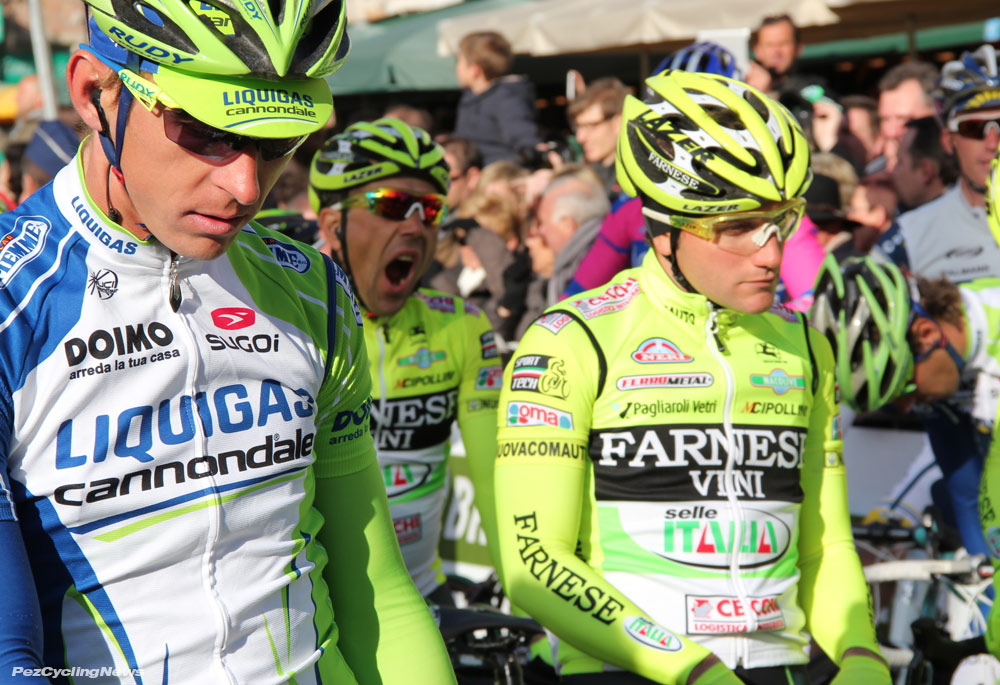 With 250km ahead, this is one race that starts earlier than some riders would like.

After a few days of cool and overcast weather, the day dawned clear, blue, but still cool – I’d heard it was only 2C degrees at the start. As usual, the central market square in Brugge was jammed with the race and thousands of fans, and as I was driving in from Kortrijk, my first objective was to run the gauntlet of road closures that encircled the city – no mean feat since I’d yet to pick up my credentials. I got lucky and talked my way past the first crossing guard, who even helped me with directions once inside the old city – as long as I hurried up and his boss didn’t see. 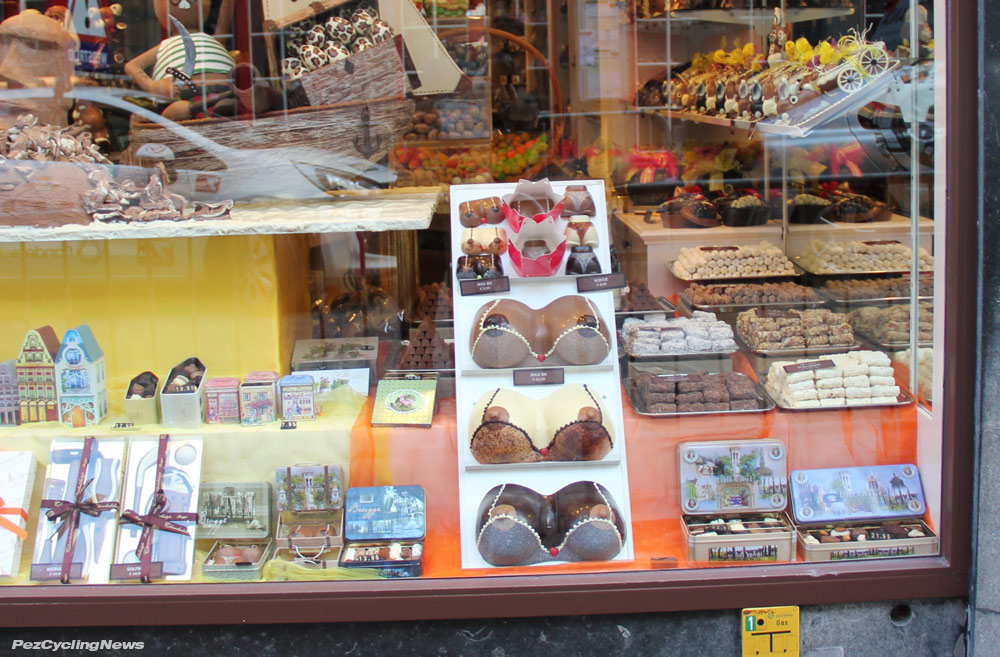 Like any old European town, there’s not much parking, and what was here was full. As I slotted the car into a blank piece of curbside, and a local stopped by to warn me I’d be ticketed – even on this de Ronde Sunday. He kindly offered up his own space a couple blocks away, if I could wait the 5 minutes for him to leave. So far this day was going my way, and I was reminded why Belgians are pretty well regarded on the world stage. 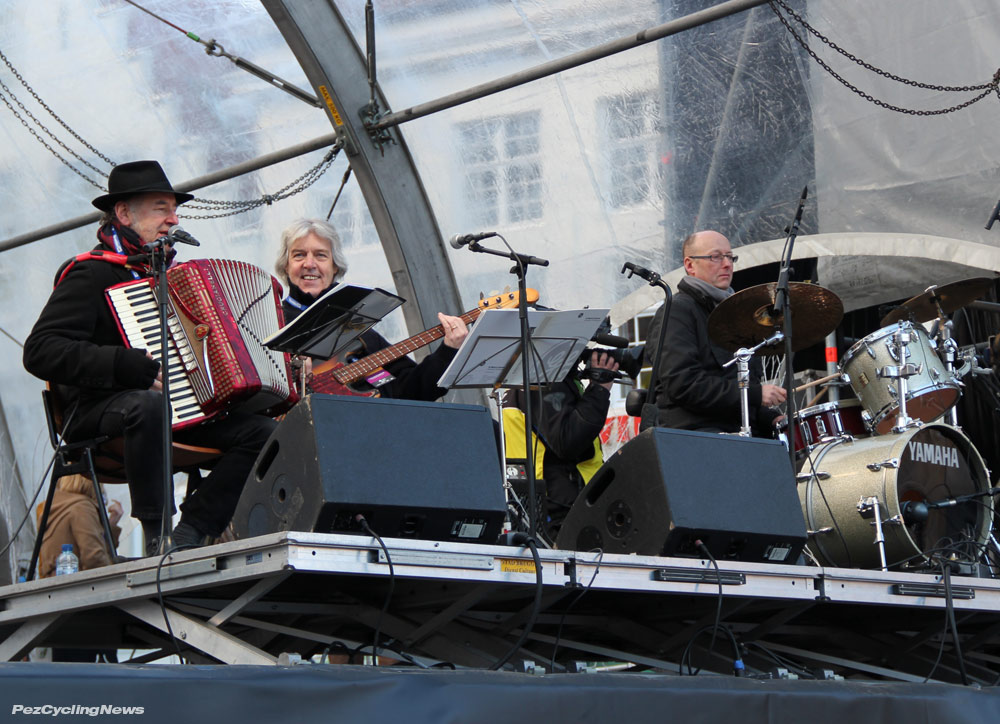 A few minutes later I was standing in front of another world stage as the day’s first riders signed in, answered a few questions for the crowd, and indulged the accordion- bass- drum-combo that took up an interesting place at the very front of the stage. I wondered if Ed Hood knows these guys from his Six Days travels…

True to form, the big name riders wait till he very last minute to sign on. I can’t blame them for choosing the warm bus over the freezing start line, but it does make for a sort of anti-climatic sign on. 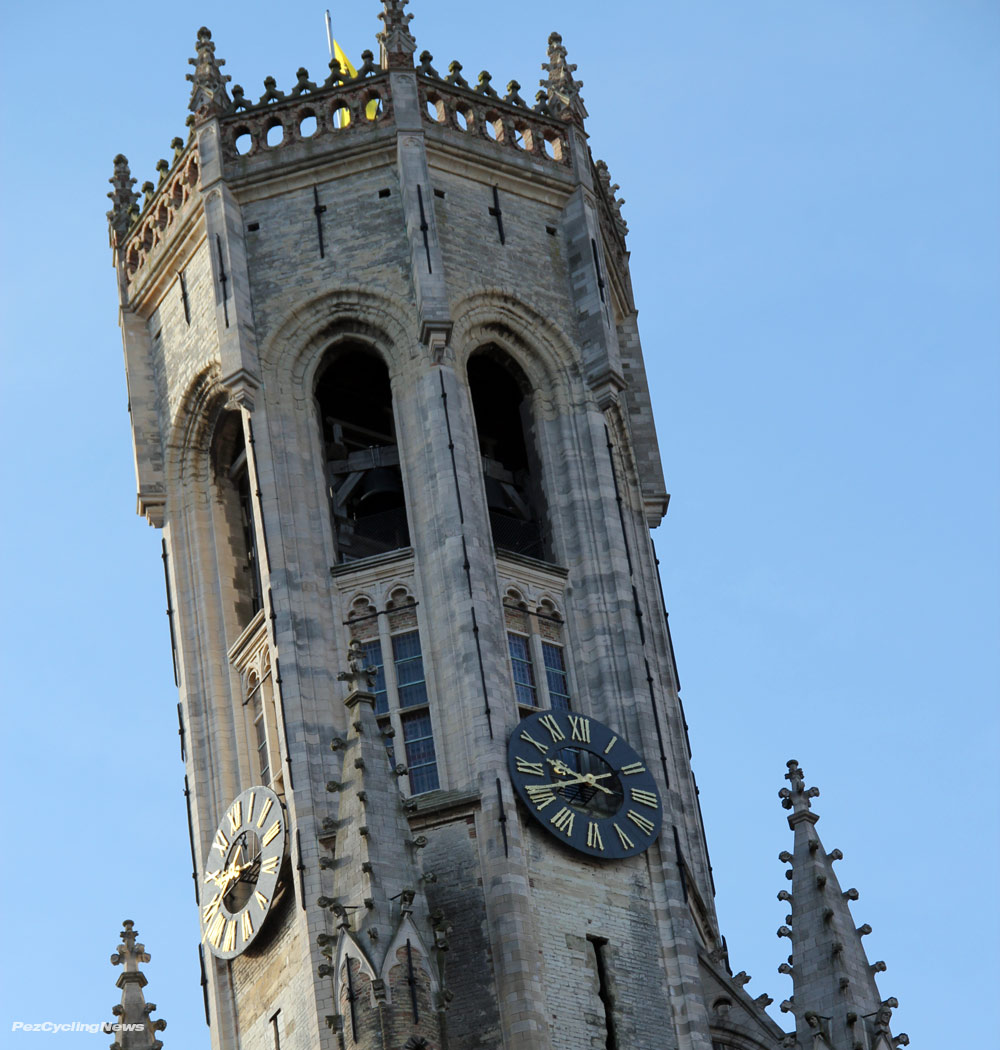 But you can feel the anticipation build as the big tower clock sweeps up towards the appointed hour, and not wanting to get stuck here behind the race, I made my way back to meet up with the VCT crew. 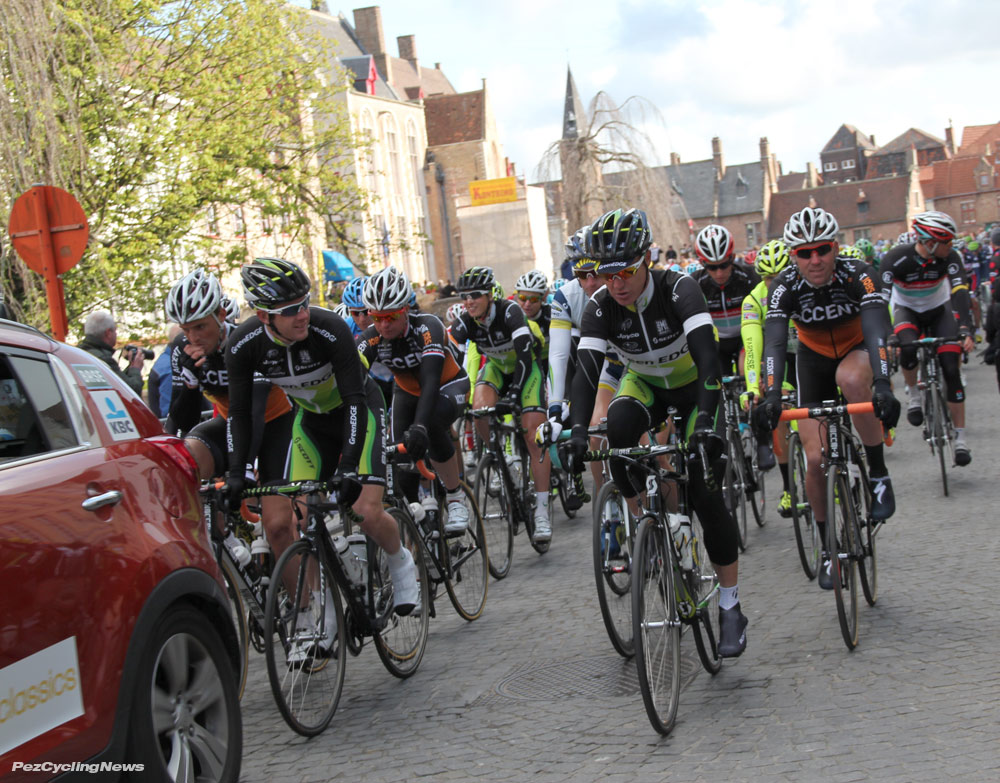 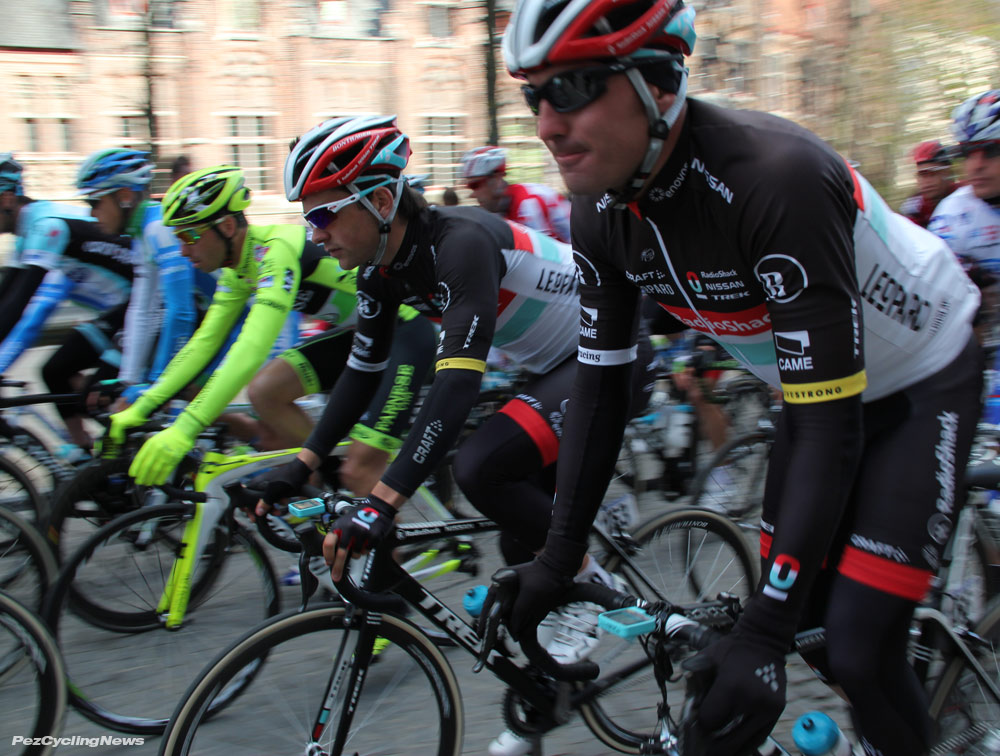 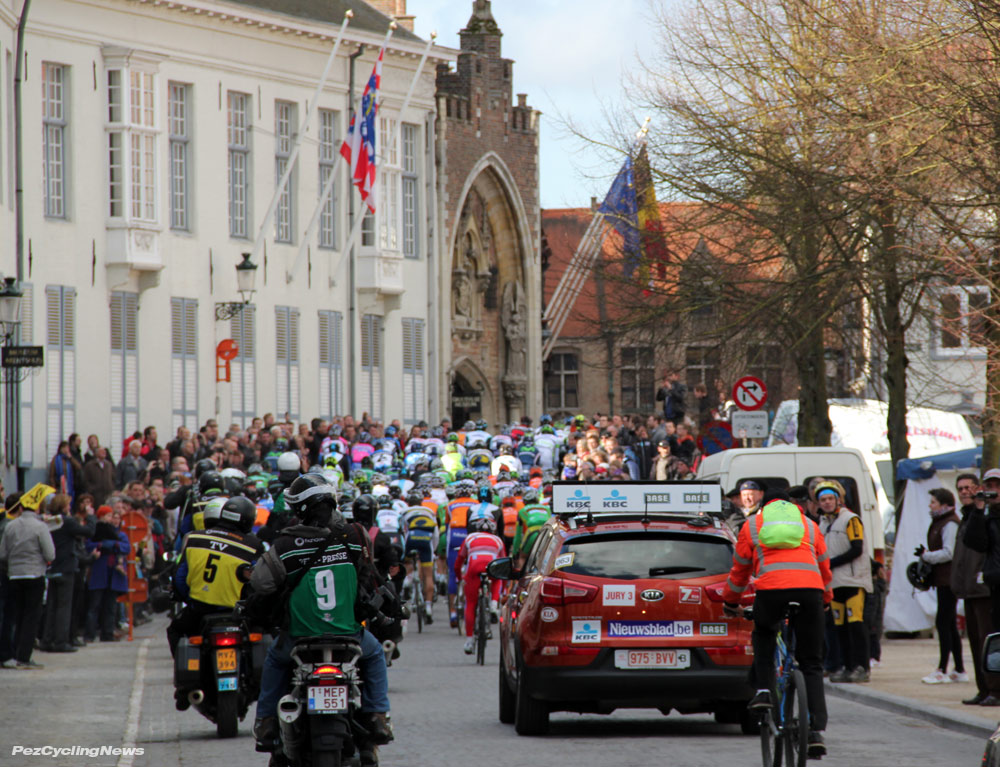 And they are off on a 6+ hour day of racing.

The plan was to stop several times at different points along the course to see both the women’s and men’s races. The women’s Ronde started in Oudenarde, and their passage on a long section of cobbles was our first stop. We hadn’t parked for more than 5 minutes when the women’s race vehicles arrived, with the world’s top pro women in hot pursuit. 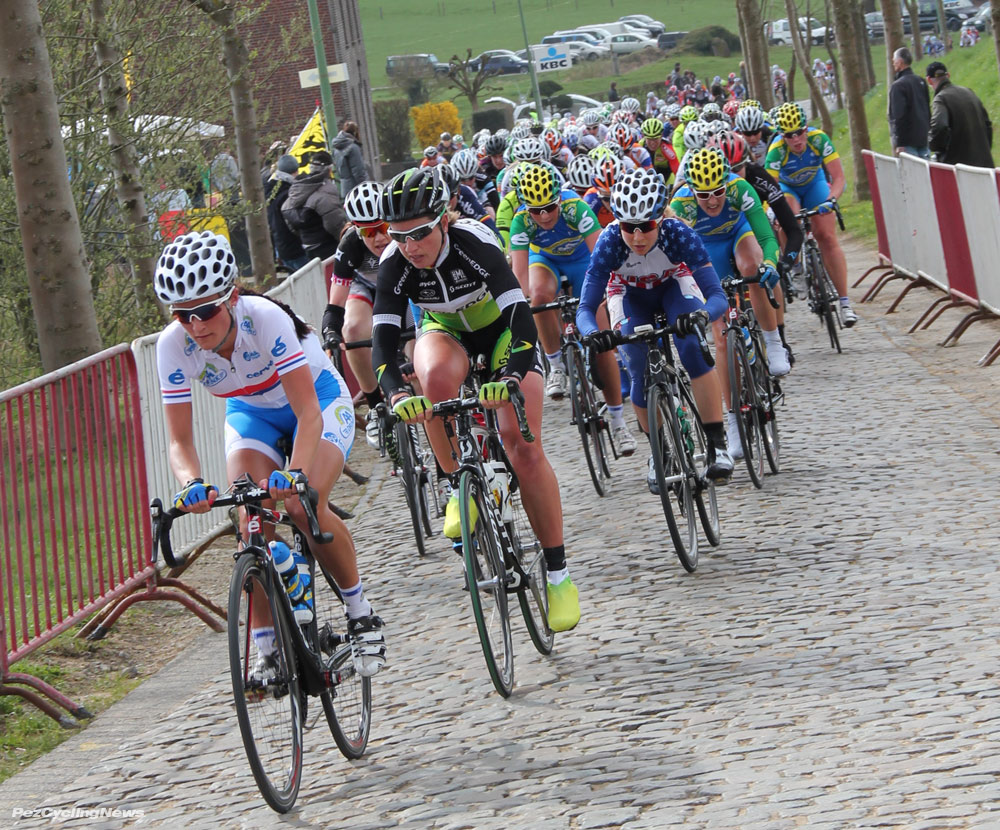 Having ridden the cyclosportif the day before, I was looking forward to hopefully recognizing some of the same cobbles that had sent me into my own private hurt locker. I know how much effort it took me to get over the medieval stones, and as British champ Lizzie Armistad powered the early race peloton past, the effort in the women’s faces was plain to see. 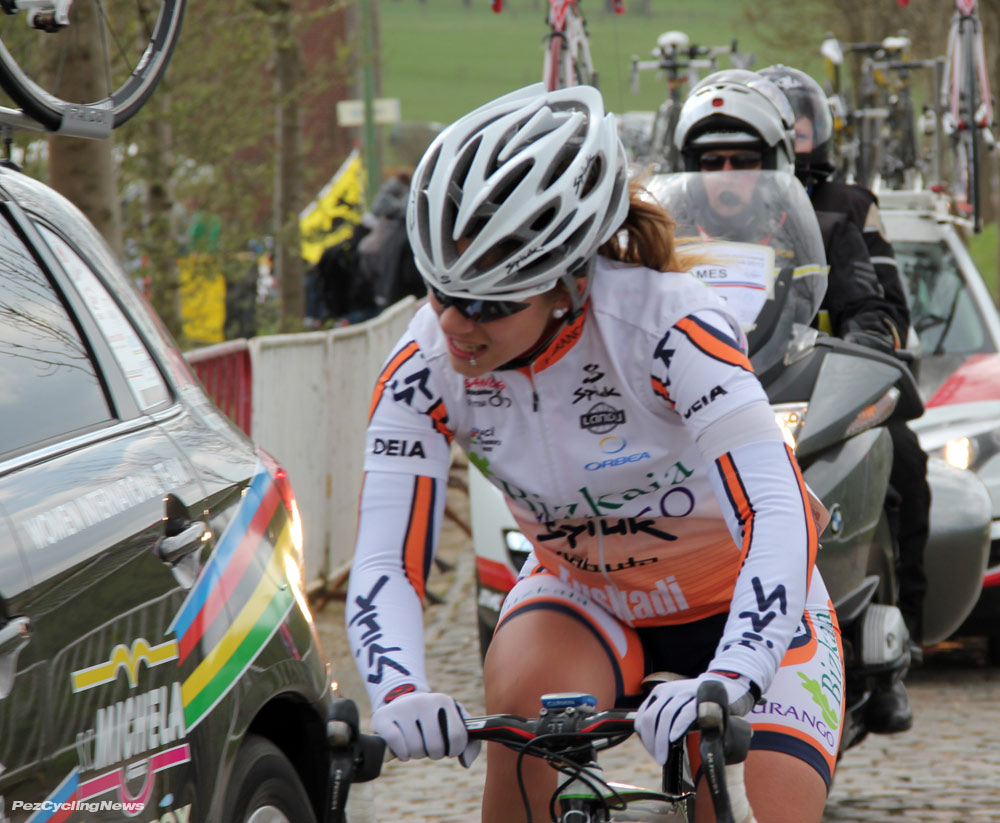 Bike racing is pretty cool to see any time, but I’ll admit it was even cooler to see the cream of the women’s crop doing battle at a classic. While the life of a female pro is a far cry from what the men enjoy, they work no less hard, and the suffering it takes to be there combined with the almost non existent wages many of these riders receive makes their suffering even more pronounced.

I couldn’t help but feel for the few stragglers who’d already been dropped as they faced either a very long day alone, or deep disappointment… or both. 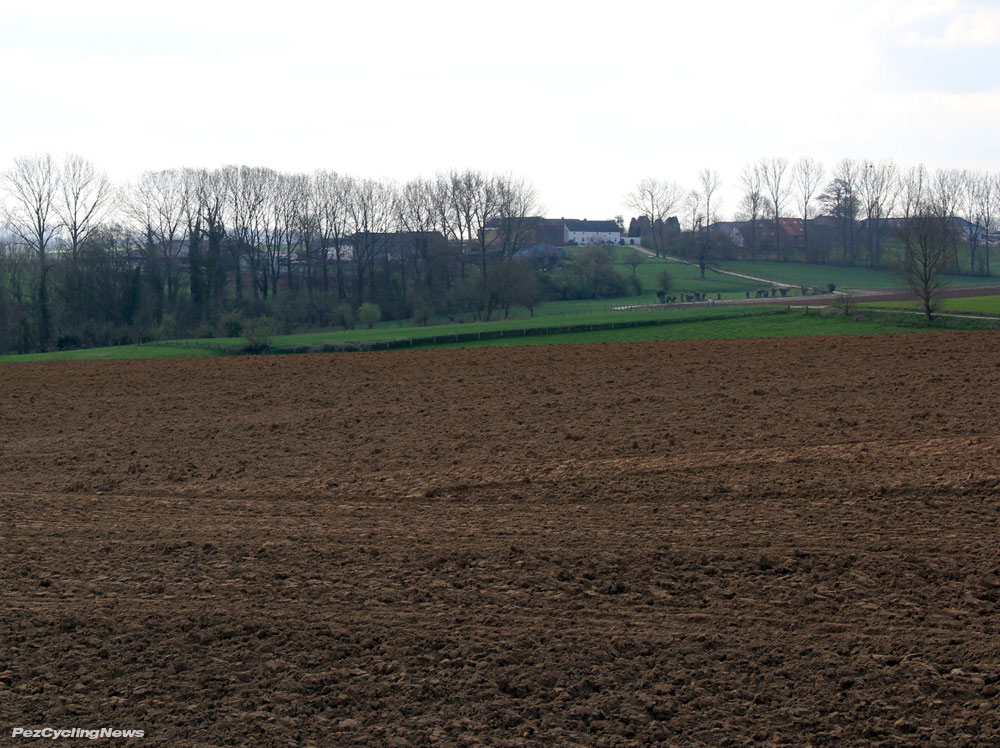 After another nearby stop to see the ladies for a second time, we made our way to intercept the men’s race and get a taste of the main course. Our vantage point at the top of the Eiekenberg revealed what a trench it is. We rode through here in Saturday’s sportif, and of course nobody’s really checking out the view when you’re hammering over several hundred meters of cobbles, so it was easy to miss the 20 foot wall that boxed in one side of this sector. 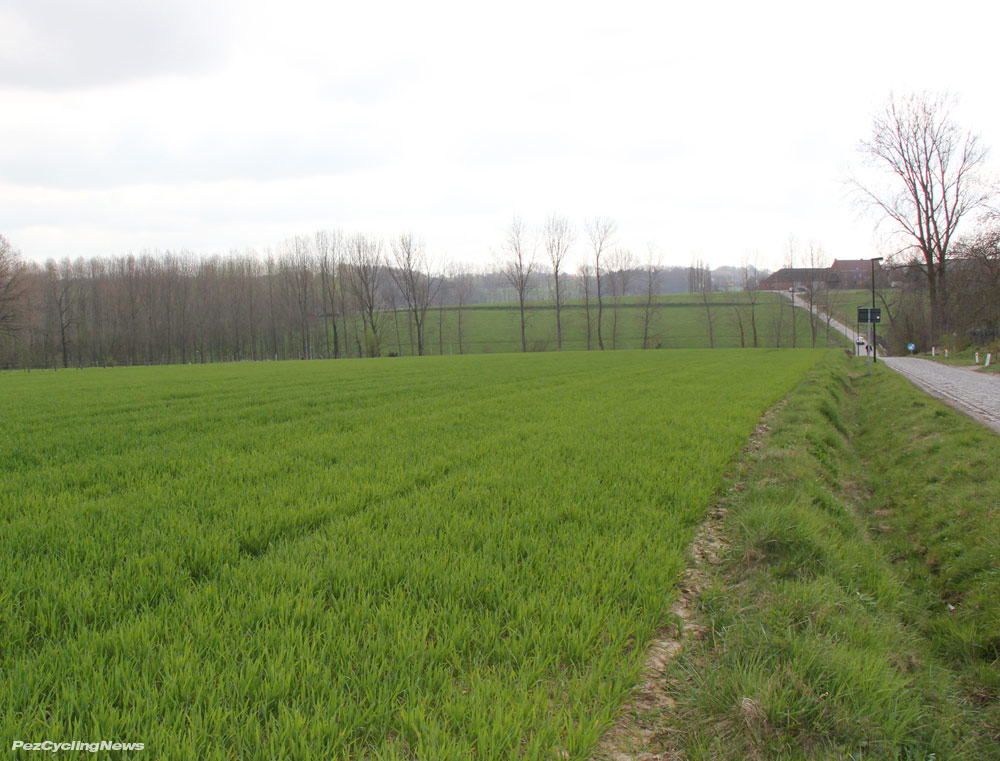 It made for a very cool vantage point – and the 20 minutes we waited for the race showed off the stuff you just don’t see on tv… like: 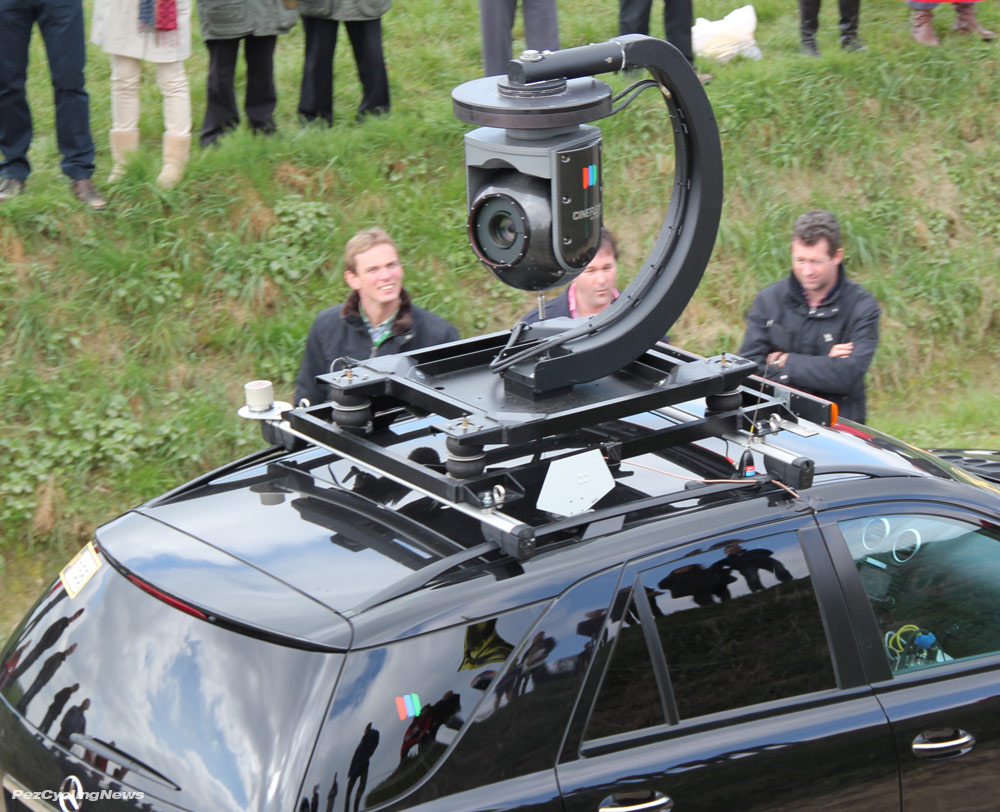 – this car mounted camera – like the ones usually strapped to the helicopters shooting the race from above. This one came by on a car ahead of the race, but was too far in front to actually see the riders – so why it was here I’ll have to report back on later. 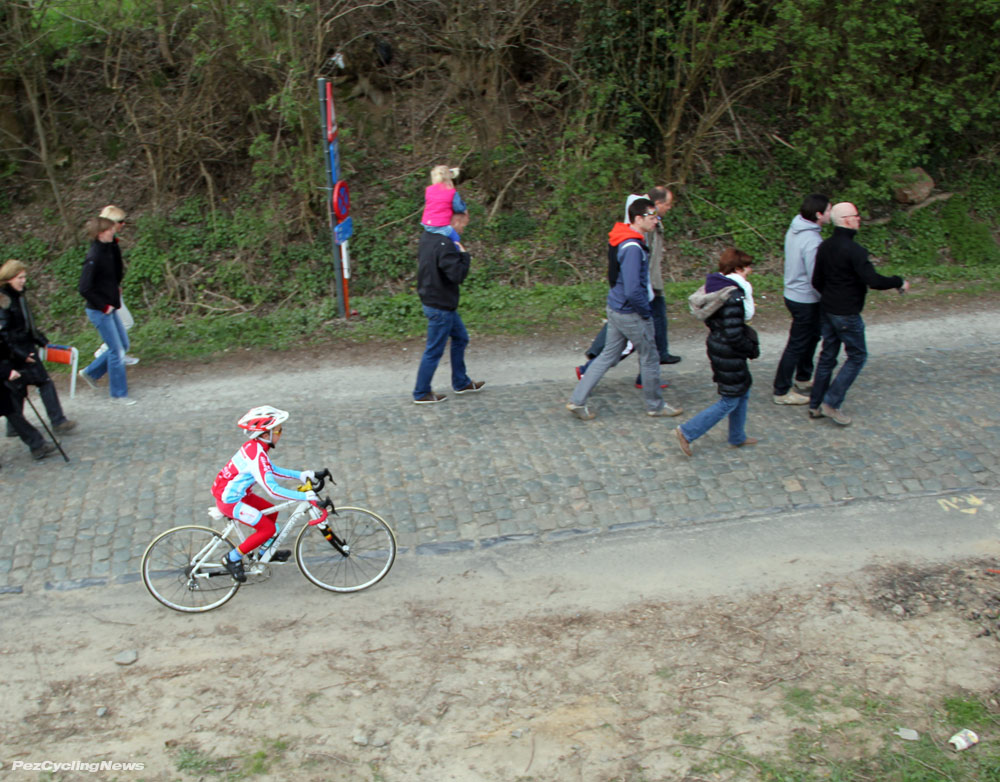 – and young fans of road racing – very nice to see they’re growing them here at least. Watch for this little guy in about 20 years.

Then the race comes by – the pretenders about 5 minutes up…. Followed by the contenders. Shooting pics means you miss the action – but at least you get a record to go back and examine… 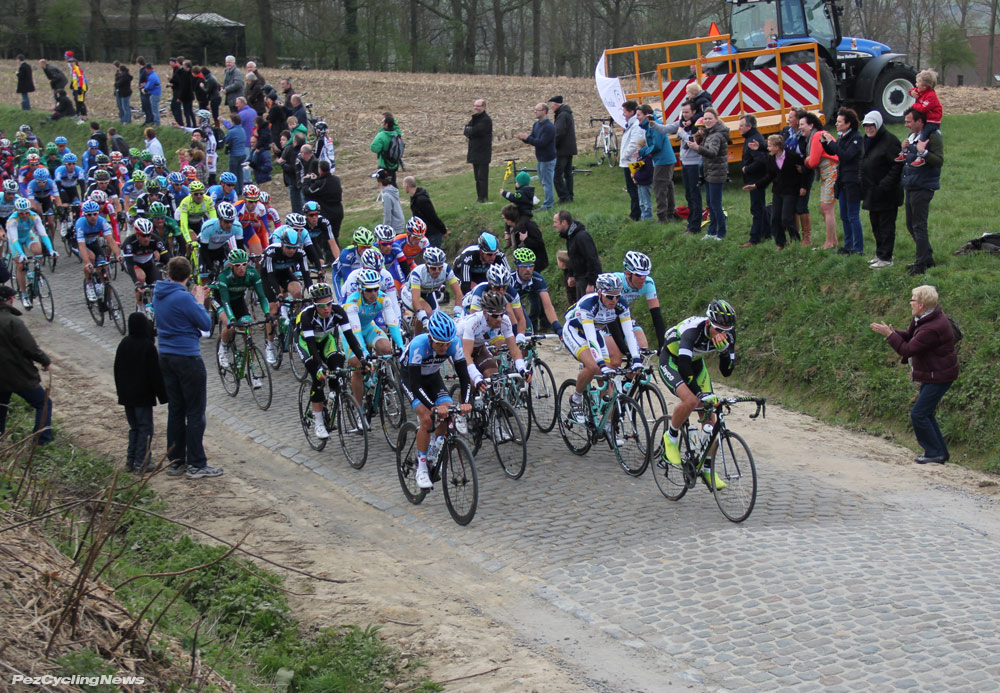 It all happens so fast you’re lucky to spot more than a couple of key riders – but a closer look at my series of pics here showed Boonen, Cancellara, and Ballan all near each other and close to the front. It was soon after this that pic Fabian’s troubles started. 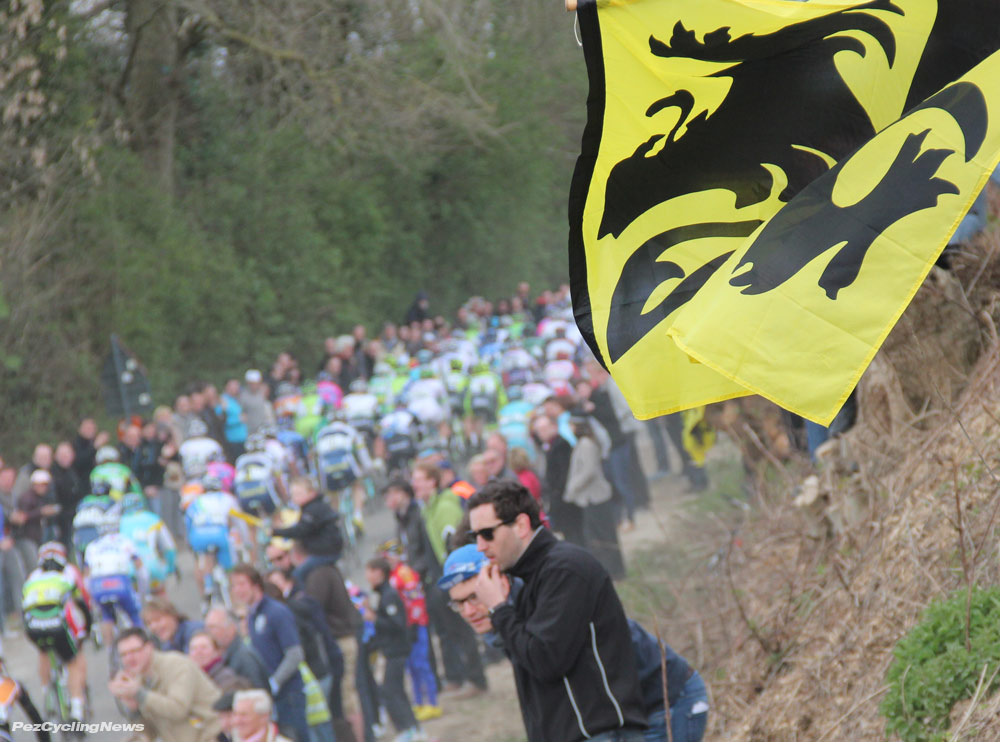 Like I said earlier, the only way to see this race is with someone who knows it and the area. After the pack rolled by, Pete directed us to walk a couple hundred meters around the corner to a restaurant where he’d booked us in to a private room with lunch and the requisite beers – which coincidentally was right along the race route and another passage about 45 minutes later. 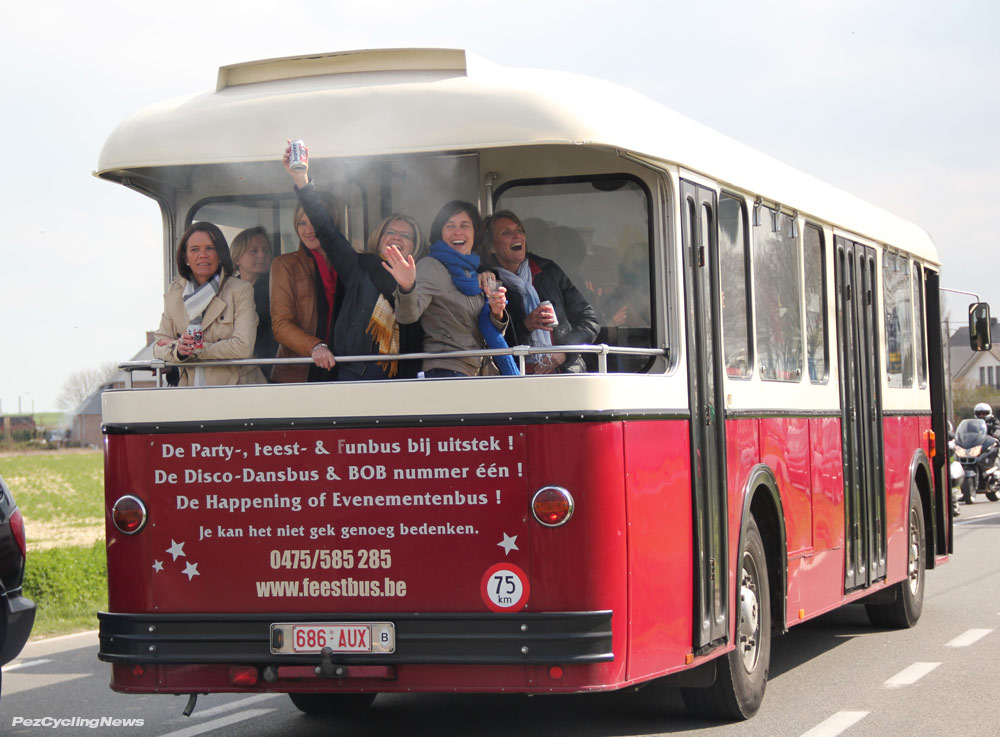 There’s no shortage of ways to enjoy the race, I particularly liked this rolling party bus. 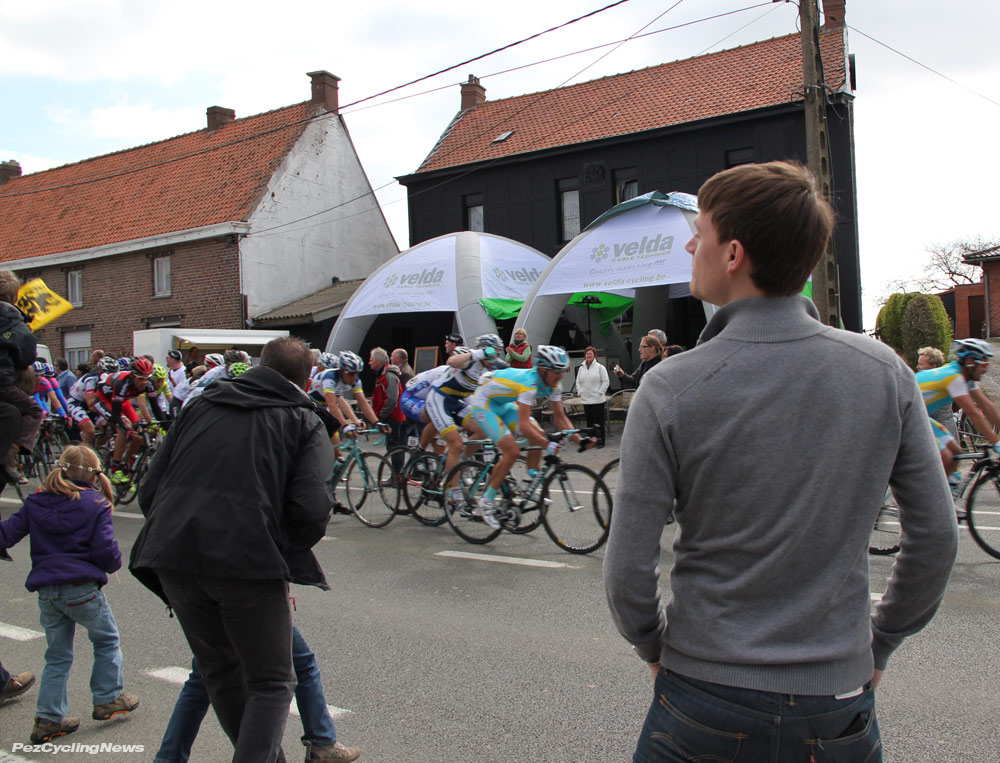 After the race passed right in front of the restaurant (that black building in the above pic), it was out the back door and into Pete’s second van, which had been strategically parked so we could get to one more race passage before the finale. The second van was key, since our first van was parked on the opposite side of the closed race course. Once again… kudos VCT. 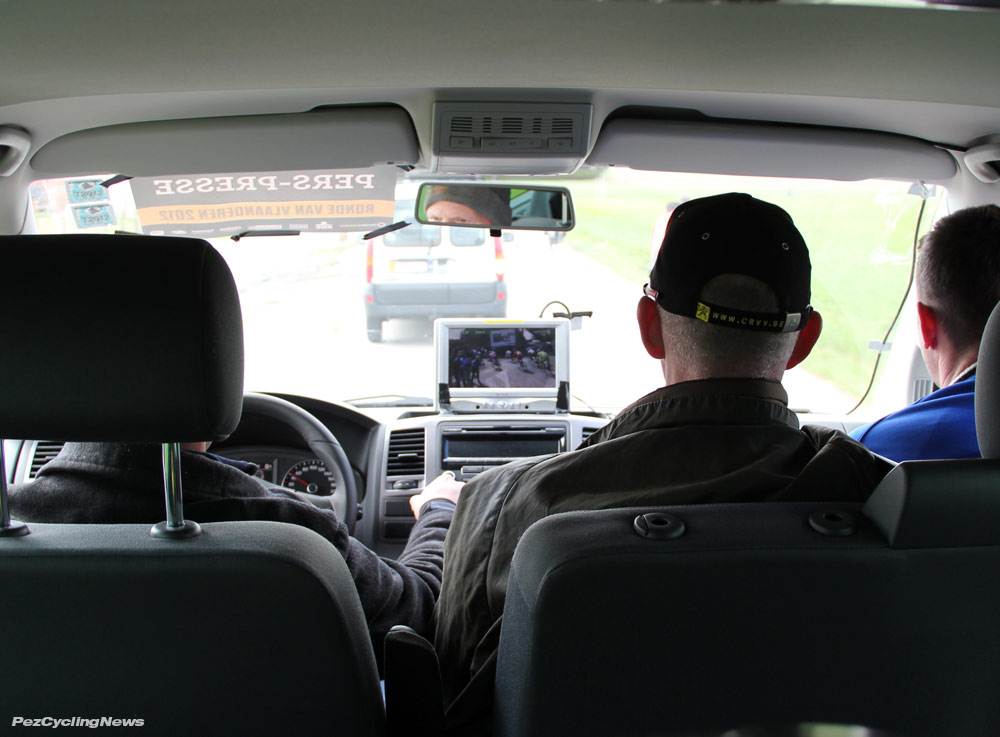 On the way down to our next spot, Pete tuned in his satellite tv. Nice. 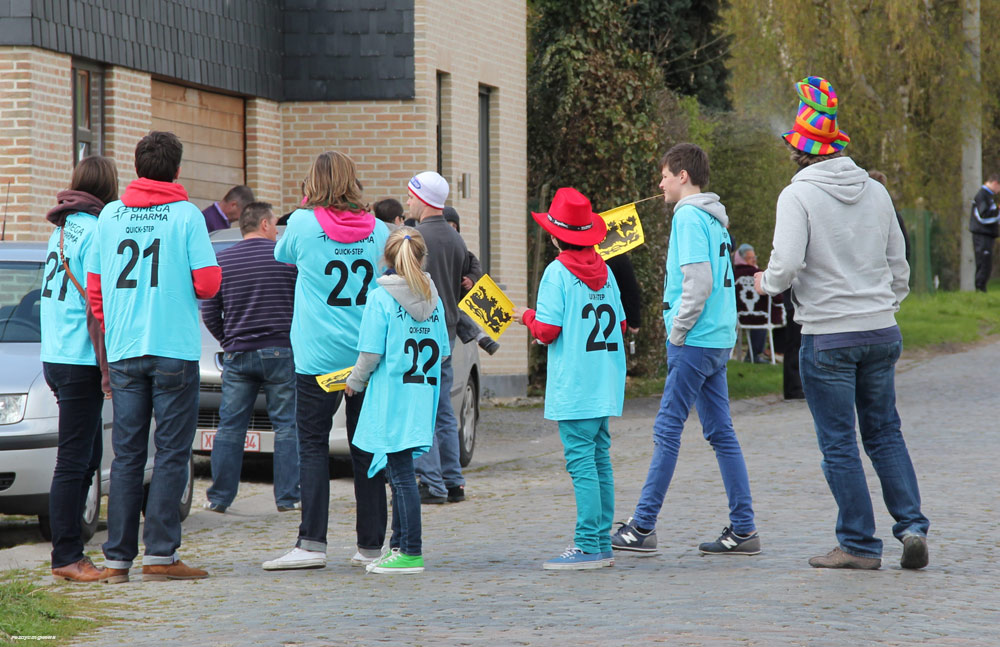 Our finale race passage came just after the feed zone, so riders were still chucking musettes as they entered this long section. One of the Movistar musettes almost beaned me in the head, then bounced into a ditch – which I duly retrieved and stashed like the unexpected prize it is. 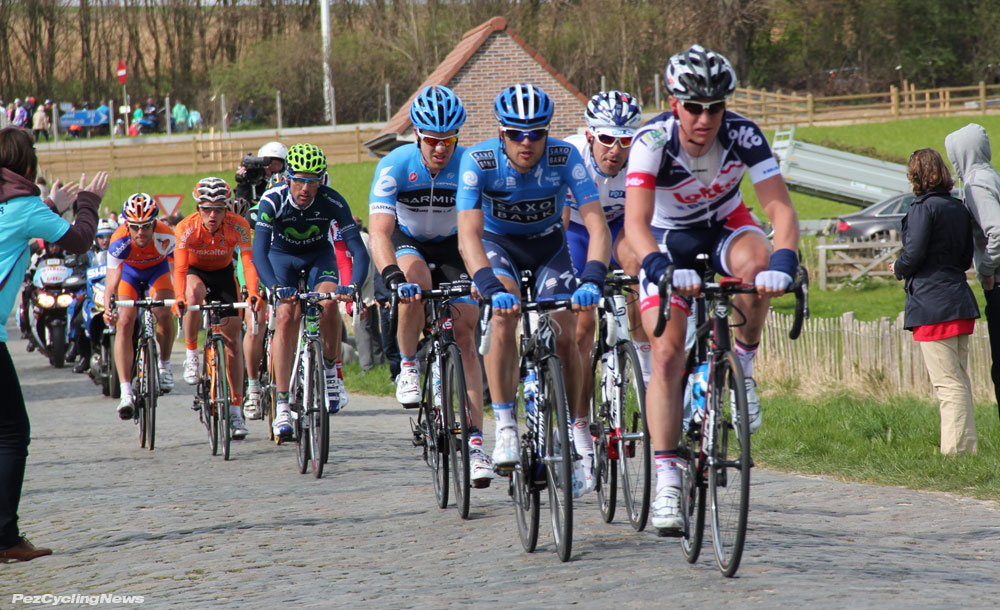 By now Quickstep was getting down to business, but there were still 70-80km to go. 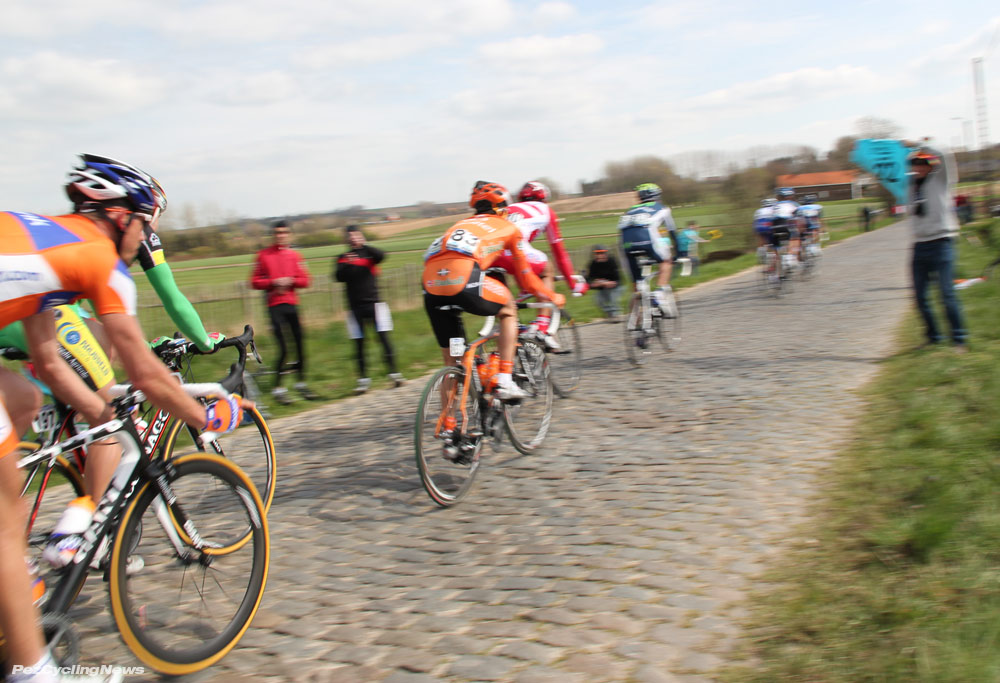 From here it was back to the restaurant where a hot lunch awaited, and we took in the sharp end of the race on the big screen. It was the perfect mix of seeing the race action live, and then seeing the live race action without missing a thing. 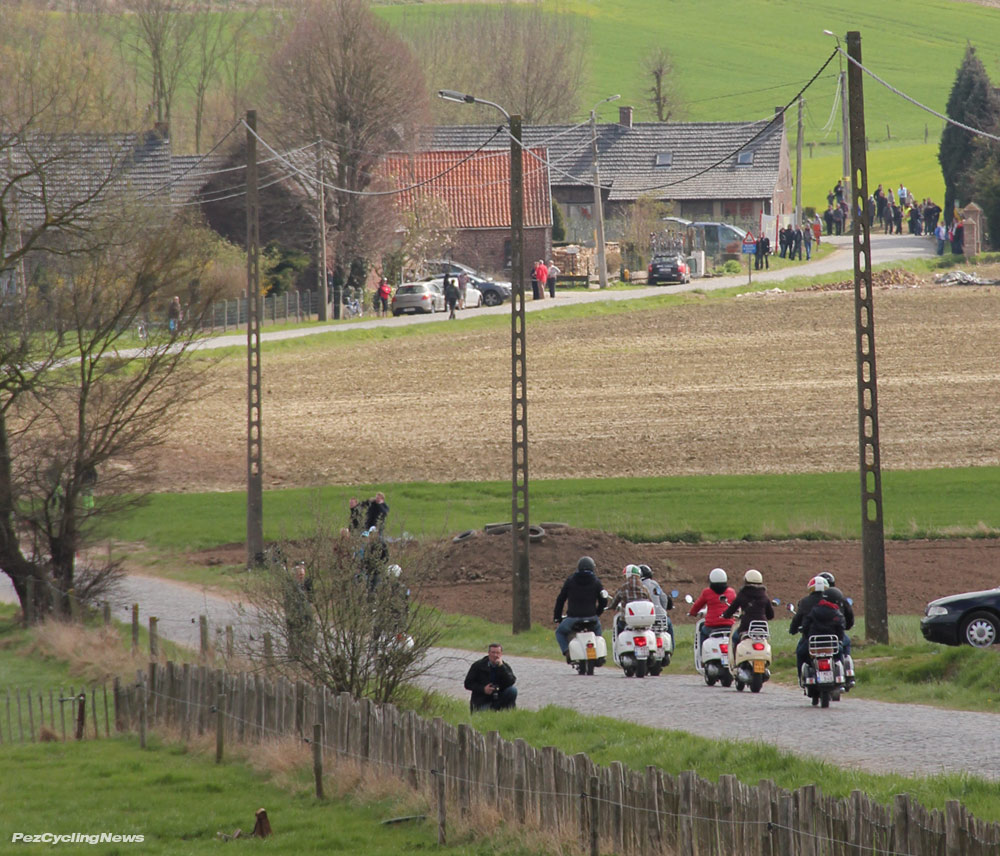 From there it was back to our hotel in Brugge – you can see it on the left – not a bad place to spend a few nights, not bad at all. 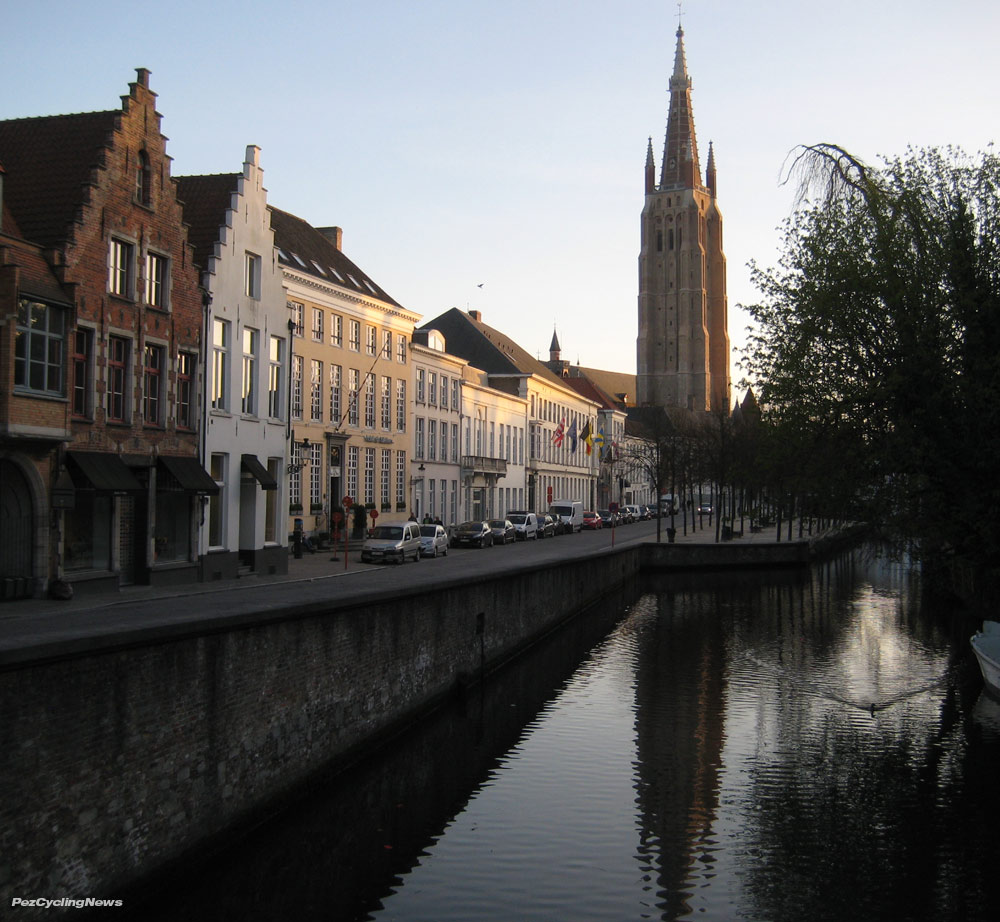 Overall it was a big day, and were left tired but satisfied. The great race was almost icing on the cake. And sure, you could sort of piece together a day like this on your own… well, no, you couldn’t. That’s why there are guys like Pete – to take care of the details and massive logistics, so guys like me – and the rest of his guests can sit back and really soak in the race.

It’s not the only way to see –or enjoy chasing a classic, but it is a good one and worth checking out.

FLANDERS’21 PEZ Preview: Who’ll Be the Best on the Hellingen?