As perks go, following a training ride in the car of Columbia DS Valerio Piva is a pretty sweet way to spend a Sunday. To round off the team’s media weekend, Pez got strapped in for a five hour tour of Mallorca as the riders got competitive.

The organisation is spectacularly efficient … even the press were handed print-outs of today’s schedule ….. before we got to the bar last night. Now even we know which group leaves when, who’s in it and where they’re going so the riders have no excuses.

Sunday’s jaunt included the unofficial Columbia TTT championship: three groups going at it hammer-and-tongs for the bragging rights. Unfortunately, there’s been a spanner thrown in the works. Brian Holm asks at breakfast: “Who won the Australian Nationals?” He’s still in the dark when I roll up to the team cars for the ride start.

“You guys were second and third, in a three-man finish”, I tell him. Brian swings round to Aldag: “Is that true?”

“Yes … there was three together and we got two and three,” shrugs Rolf, smiling. “Hmmm … when I didn’t get a report earlier I thought maybe we didn’t win,” mumbles Brian. 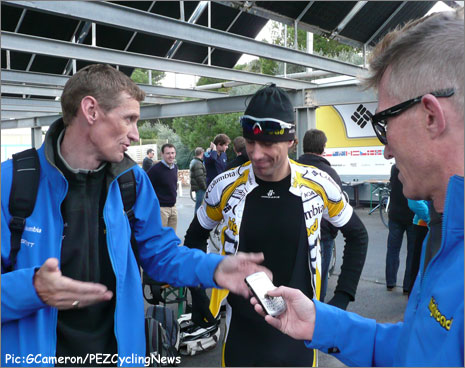 9.45am: There’s a lot of milling around as riders fiddle with bikes, mechanics sort TT rigs, road bikes and spares. Burghardt’s TT bike is unavailable so he’s on his road bike all day. The TT bikes will all eventually be rigged with electronic shifting, but so far only Tony Martin’s bike has it fitted. Does he like it?

“I tried it before now and it works great. Today, I’ll really try it out to see how it works under pressure. It’ll be a proper road test.” 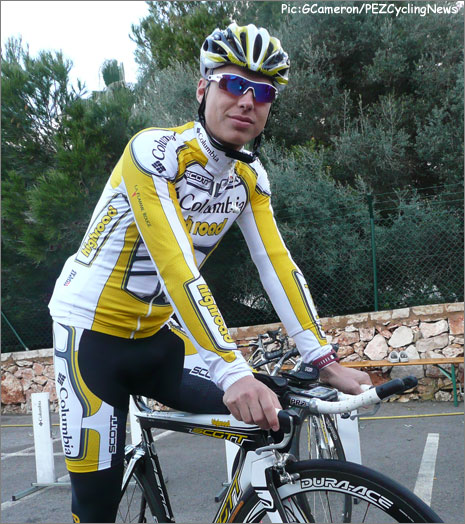 We get a cheery response from Canada’s Michael Barry: “Hey .. yeah, things are going alright. I feel good, the weather’s getting better! I’m looking forward to a good day out.” 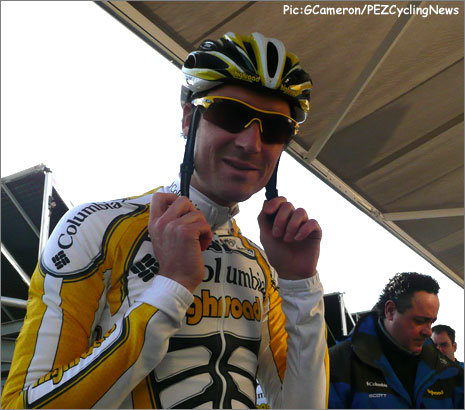 10am sharp: Our driver for the day is Valerio Piva, a hugely respected pro in his time, who now earns his money looking after the next generation. Jokingly described as ’emotional’ by Rolf Aldag at the press launch, Valerio kept us entertained with a cracking string of anecdotes. We’re going to be following Group 1, who set out on a ‘medio’ warm-up, to get ready for their 20km TTT. Then, we’ll stay with them for the duration.

This means that we get hours of gold dust from Valerio and mechanic Lars, who’s along to keep an eye on the TT bikes.

“Everyone has a TT bike at home so they all train maybe once a week. The real specialists like Pinotti will do more especially for a Grand Tour. For us, today is an important chance to try the TTT for all the riders.”

10.15am: “It’s a good sign,” laughs Valerio as a couple of amateurs who tagged along are dropped as soon as the road tilts beyond horizontal. The atmosphere in the car is calm. Lars is chatting away and Stig Cornelius from Denmark’s ‘Cykelmagasinet’ is snapping pix as we roll. 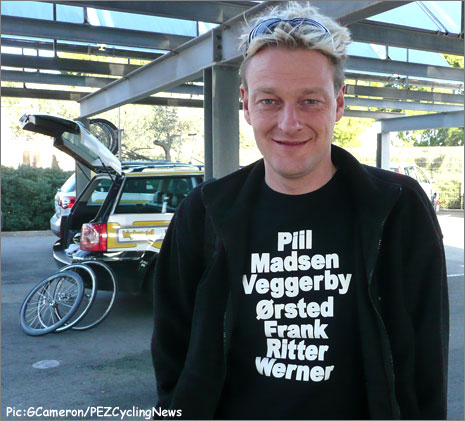 Sieberg has a little stop to check out his brakes before we motor-pace him back up to his mates. We can hear lots of laughing and banter as they bowl along at 30kmh/s. Pinotti drops back for a chat. “Contento?” asks Valerio. “Si, contento”, smiles the Italian. The TT ace is looking forward to this morning’s little test.

We ask Valerio about the kit. He’s not convinced by white shorts as a general rule. “I prefer the black shorts … like this one”, as he points at Dockx riding along in front of us. “The official team colour is white, but I like the black shorts. They’re better for the wet weather like we get in the Classics sometimes. It’ll be white for the Tour Down Under, California and Qatar, but black for the Classics.”

10.30: No mechanicals so far, and Lars is scrolling through the BlackBerry reading Allan Peiper’s race report on the Australian Nationals. 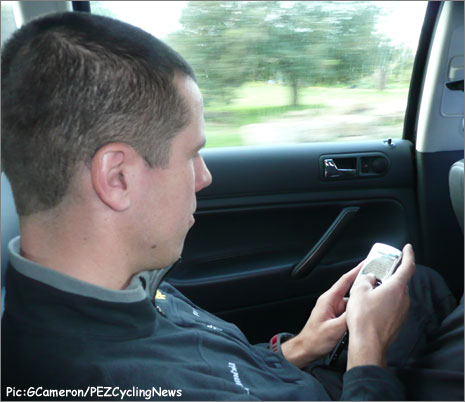 10.40am: We hit a roundabout and things get serious. The riders flatten out their body positions and increase the tempo. Straight into line and it looks mighty impressive. Now I can start to see why our Ed Hood has such a thing about the TTT! We wind down the window and we can hear the swish of wheels on damp roads. The clouds look ominous but it hasn’t rained … yet. 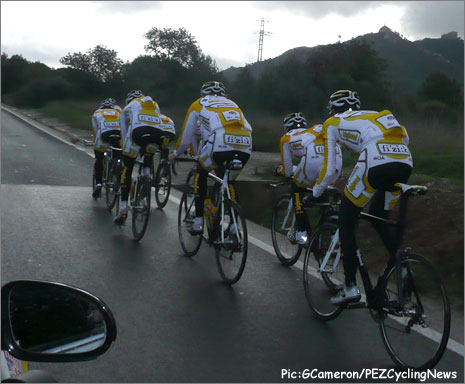 11.00am: Time for a natural break, and everyone gets their instructions about the TTT rules. We’ll be following Group 1: Sieberg, Barry, Reynes, Burghardt, Dockx, Rabon, Grabsch and Pinotti. The sixth man home after 20kms counts and the Directeurs want to win this as much as anyone! 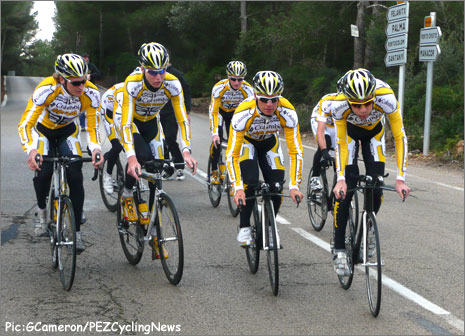 11.15am: The guys are pulling uphill nicely, but this is not just for show. “We need to learn to be strong together – last year we lost the Giro TTT by seconds because we had some guys who were so strong we dropped riders. You won’t drop anyone downhill, but we’ll watch out uphill.”

Lars reckons that someone going too hard “… can do much more damage than good.” 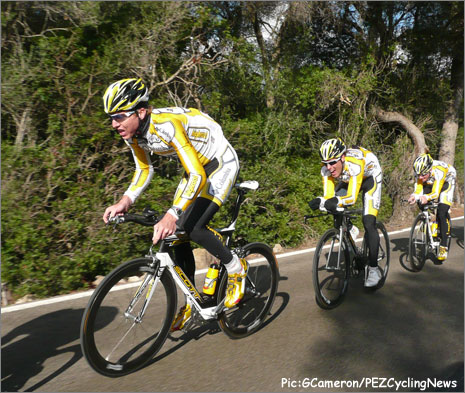 Lars has a better idea for training: “Learn from the French police. Every time four or five overtake on their motorbikes going to a race start, they’re in perfect formation – a dead straight line! You only ever see one bike when they’re ahead of you!”

Rabon has rejoined his group after we give him a little tow, although he had to ask Valerio to cool his jets a touch – it’s still a chilly wind for just sitting and holding on when you’re tall and skinny!

We hit a roundabout for a 180° turn and Tristan Hoffman is lurking, Wacky Races-style, with a handful of gravel and a mischevious grin!

We ask what gears the guys are rolling: Valerio reckons its a “… 53 or 54 on the big chainring. Except Grabsch who is probably on …”

“… 56!” laughs Lars. “He’s a strong guy! 11s and 12s on the back are no good for Bert – they’re too narrow. Too much friction for a guy with such low revs. When he won the Worlds he averaged 50kms/h so that shows that you need the right set-up at low cadence.

11.30am: Valerio’s getting competitive and the horn gets a few blasts: “Sixth rider counts!!” he yells out of the window. “Look at Dockx, I think he can do another hour!” says Lars. The young Belgian is storming along. 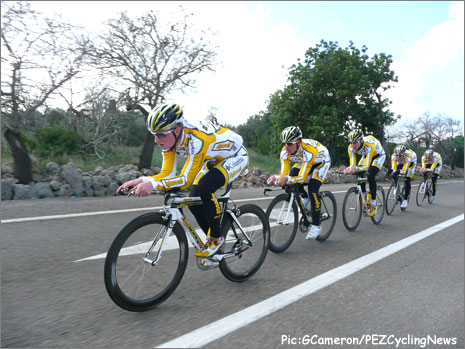 It turns out that we’re looking at nearer 25kms all in. As soon as the finish approaches, Pinotti and Grabsch take over at the front and the speed goes up …. quickly! Our guys are home in a nifty 33’47”. 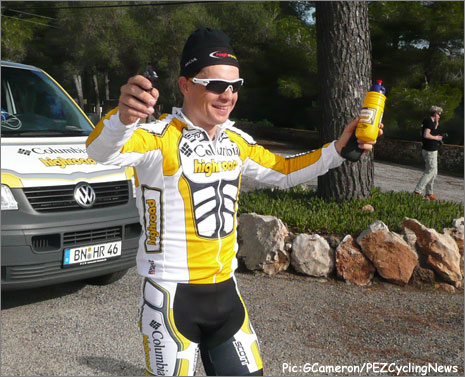 When groups 2 and 3 arrive, there’s light-hearted confusion. Lovkvist’s group is fastest but only for five guys.

Marcel Sieberg is giving the love to his buddies: “Good job, guys!!”

Lovkvist: “We have the fastest time. We’ve won!”

Aldag: “No, you haven’t – only five finishers on that time!” 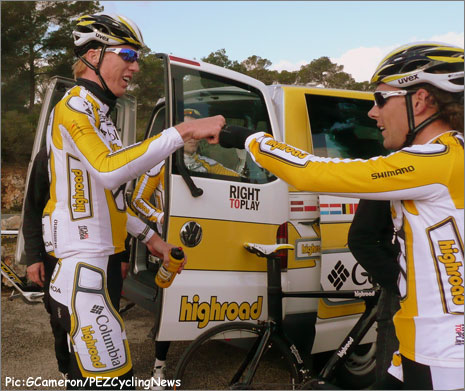 Noon: There’s a personnel reshuffle in our group and we set off, pacing Lovkvist and Barry to the front. Valerio explains one of the keys to the Columbia experience, without really realising it: “This is not just ‘Die Mannschaft’ anymore. It’s ‘La Squadra’, ‘The Team’ ..”

The multilingual banter is flowing up ahead of us, to take the mind off the next three hours.

12.25pm: The word ‘doping’ rears its head and we ask Valerio his take on the rumours that Ricco is back in training and on the wish list for some teams. “Maybe years before if you were positive for Catheine or something, you could plead ‘I made a mistake’, but not now.

If anyone gets caught with EPO, CERA …. (whistling noise) …. out, the end, fired forever. It must be understood that things have changed. EPO, CERA, blood transfusion … it’s not an accident if you choose that.” 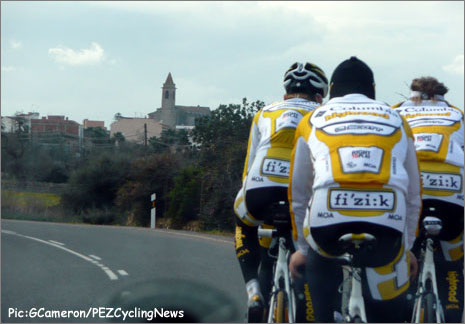 Flaix FM belts out some EuroDisco classics as we roll behind our group. Most of these guys will be going to Qatar, even Michael Barry, who wants a race before the Tour of California.

1pm: Thomas Lovkvist rolls alongside for a chat about the Aussie nationals before rolling back into the paceline. Valerio’s hoping for big things from Thomas this season. “We would like to see him go for a few specific races and go to win. He’s very strong.”

Time for a sandwich from the swag bag as Valerio sorts some details for the Qatar trip on the phone. We follow the riders to a cafe where there’s a bit of mid-ride r+r. 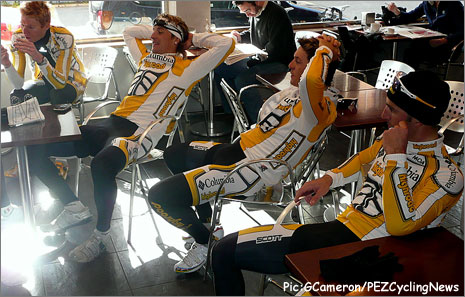 Brian Holm walks past with a “Hey chief!” as I spot Rabon’s bike bike swinging from the top of the door. When they finish up their coffee there’s a comedy moment as Frantisek turns back from the pavement to retrieve his steed. “Hey … Rabon! Where’s your bike?!?” The Czech takes it all in good humour with a self-deprecating grin.

1.45pm: We’re back on the road and heading for the 510m San Salvador climb for a steady work-out. Burghardt plugs in his iPod, Lovkvist and Barry hit the front and we’re away. 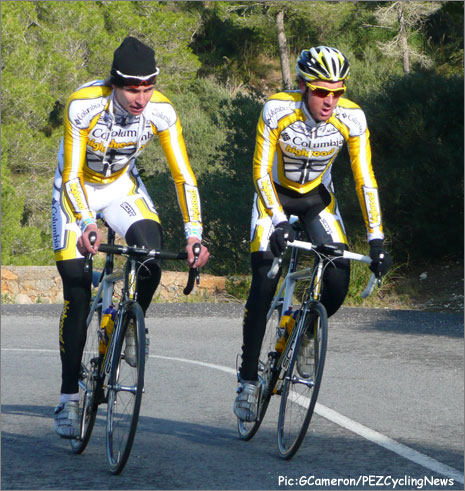 The Swedish/Canadian combo crest the top fastest, and Thomas tells me later he averaged 380 watts all the way up. 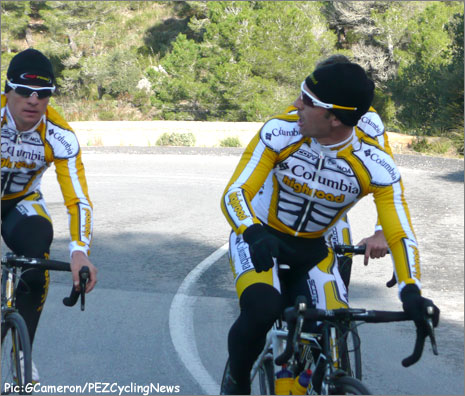 Behind, Valerio admires the scenery as we snap away. Reynes pedals past: “Hey, Valerio. One day …. all this will be yours!” with a dramatic sweep of the arm.

As the riders refuel and wrap up at the top, Marcel Sieberg shares his sandwich with a stray cat. “It was here in December and it was only tiny. Now look … it ate PowerBars the last time!”

It’s a gorgeous day for a bike ride with the sun now beaming down. Valerio watches the guys steadily. “Training camps are long days in the car, no? 5 or 6 hours training, for me, it’s watching and concentrating. It would have been quite boring on my own!!” (laughing).

2.10pm: We talk about comebacks – Armstrong’s and Bartoli’s. “Not Bartali – that would be a real comeback!”

We talk about living in Belgium and Valerio’s passion for the Tour of Flanders.

And we talk about high-speed descending as Valerio gives some tourists a lesson in handling a hairpin at training speed. The riders have long gone by this point: “We have a few kamikazes in the team …. but in my day Urs Freuler, the Swiss, was the best. Definitely.”

Concentrating is vital as Burghardt flies out of a side road laughing and giving it comedy road rage hand gestures. “Get behind!” laughs Valerio, as the big German gets some impromptu motor-pacing training. 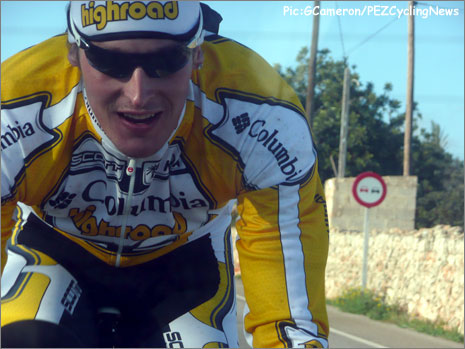 We roll towards the hotel, and it looks close to a 170km day at about 32kms/h average. A nice hit out in warm weather.

Valerio brings us home, just in time to catch the first group of riders back getting their al fresco post-ride stretch. It’s quite a spectator event as lots of sports-mad German tourists get to watch top flight pros working out right beside them. 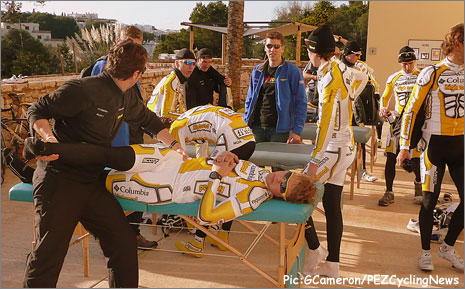 PEZ enjoyed a great day out, and a big thanks to Valerio Piva for his patience and sharing his knowledge with us, and to Kristy Scrymgeour for sorting out the logistics of the trip.