Here at PEZ, we don’t normally get too involved in the machinations of daily bike advocacy. We of course support all efforts and directives to make the road a safer place to ride, but sometimes something pops up that is so foul, so disgusting, that it needs to be spoken about, and actions called for.

It was recently brought to the attention of a fair number of bike riders, that a group exists on Facebook that by itself isn’t too big of a deal, it’s called There’s a perfectly good path right next to the road you stupid cyclist! . It’s never nice to see something like that, but honestly, not that big of an issue in the grand scheme of things.

When you click through and take a closer look at the commentary, however, things take a disturbing turn (these are all direct quotes, well, save a few stars every now and then, including the spelling):

• I will fatally collide with you f***s on purpose if you get in my way! die!

• what a beautiful day to run over some lycra-clad fkn morons!!

• lol a drunk aboriginal swerved onto the road from the footpath while i was going 60km/h down pinjarra road, guess who lost that confrontation. i split his head open and broke his left leg. Stay on the f***ing footpath u dumasses

• ive had someone give me a finger as i drove past, geuss what i did, pulled over waited for him and his group then me and my mate jumped out and bashed the f***ers, lol i had my cop torch and my friend had a hockey stick, he wont be flipping off another driver for a long time

• who else plays gta? after playing that game then going for a drive i get slightly homicidal and wan to hit every single one of those stupid biker loooooosers with my car.

You don’t have to join the fray and threaten violence back as some angry bike riders have done. There’s not much to be done in terms of talking logically – opinions aren’t changed on that page, but anger levels do. Reading about how a motorist wants to kill me is unsettling, but I don’t feel all that much better reading the following either:

• I LEGALLY CARRY A FIREARM DURING EVERY RIDE. THE THREAT OF ROAD RAGE VIOLENCE IS THE REASON. I AM VERY PREPARED TO USE MY GUNS IN SELF DEFENSE IF I HAVE EVEN THE MOST THIN LEGAL REASON TO DO SO.
YOU MAY HURT ME -BUT I WILL KILL YOU.

The group isn’t small – it numbers over 30,000. I only spent a couple of minutes browsing through the comments, but I assure you, there’s more where that came from.

I don’t know much about free speech rights over the internet, but I’m pretty sure they don’t extend to threatening to kill a certain subset of the population.

One PEZ fan wrote the following to the Facebook page when she reported it:
Although I passionately disagree with the opinions expressed on this webpage, it is a free country and you are entitled to your opinion.

I sure hope you have purchased the additional car and home insurance to protect you from the loss of your homes and businesses, as well as considered the possibility of jail time if anything untoward happened to a bike rider after what has been said here. This webpage is an accident/injury attorney’s dream. Should you ever actually hit a bike rider, you have handed the attorney everything he/she needs to prove malice and intent to injure another human being!

Here’s a topic we feel just needs action, and for once, there’s a little something that we can do at least to keep the congregation of hatred from getting together to hold mass. 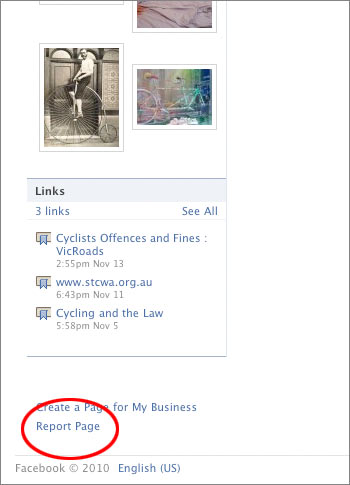 FOLLOW THIS LINK To REPORT THE PAGE to the page, scroll all the way down to the bottom left part of the page there’s a button: Report Page. Click on that and report it if this type of commentary disturbs you or you feel it warrants some kind of action.

Best Of PEZ ’09: The Photog’s View Of California