People always ask me the best way to get close to Lance. With the Tour de Georgia approaching I am finding the question popping up a lot lately. As a writer that covers him on occasion I have to be completely honest and say that covering Lance is more about being a great stalker than cycling reporter. Lance often travels with Mark Higgins, of Capital Sports and Entertainment, the group that manages him. When I see Higgins I tell him I’m on “Stalkerazzi” duty again and we laugh. 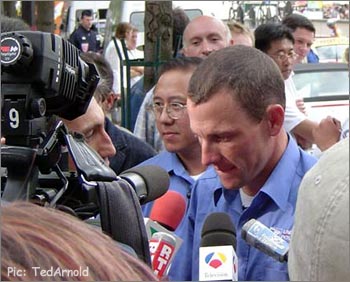 The media scrum descends on Lance after last year’s prologue during the Tour. The scrum was so thick this picture was taken by a friend, as I had to hand him my camera just to get a shot. Don’t show up late!

It’s so difficult that even though I’ll be in Georgia for the PEZ faithful, I don’t know that I’ll be able get anywhere near the guy. Sure, I have credentials, and I know all of the tricks, but I anticipate a complete scrum when it comes to “the man.” During smaller events, like Ride for the Roses, getting some words with Lance is a simple job of staking the place out and being prepared to run beside tape recorder in hand to get a few words in the precious seconds he has to give. It’s not a hassle, as every editor I’ve ever worked with knows that getting any words is like icing on the cake.

I already picture an entourage of Georgia State Patrol Troopers escorting Lance as if he were Georgia football coach and legend Vince Dooley on game day. Yet for some fans witnessing the madness as first timer it won’t make sense. They will inevitably complain that he’s too far removed. What’s funny is that the people who are often so disgruntled seem to have a profound sense of entitlement when it comes to Lance’s time. If I were Lance they’d be just the nutbags I‘d dodge too.

I am amazed at just what lengths people will go to just for an opportunity. It’s not the honest fan that I am talking about, but more like the kooky lady that walked up to security a few years ago. It was a team event near Austin and she blasted her way by event personnel towards the team bus. As she was stopped she became more and more forceful that she must see Lance. With no explanation as to why, and in a truly creepy I’m draggin’ him back to my cabin in the woods for DNA experiments kinda’ way.

After she was asked to wait outside the secured area she disappeared and I never saw her again. She was almost rigid and robotic in her manner and all the security started to hit home. I have to add that Lance spent nearly 15 minutes later that afternoon posing with babies and signing autographs, so it’s not as if patience didn’t pay off for the faithful.

It’s an age-old argument in sports that stars have an obligation to give back but that is beyond what I can fathom to address in a single article. Just know that those people that are gracious and patient seem to be the ones that are rewarded. Sometimes kharma gets a helping hand in just how you act. Those that watch, wait, and don’t ask the world in return get noticed. One-at-a-time.

My plan for Georgia is simple, I’ll count on outworking and outstalking the legions of other press and hopefully get just plain lucky. I’ll never give up all of my secrets, but know my bony elbows and years of college practice bellying up to crowded bars helps.

Proving the motto “It’s better to be lucky than good,” has become somewhat of a personal mantra for PCN writer Ted Arnold. Living in Austin, Texas as a lifelong cyclist Arnold had an epiphany of sorts while working for a now failed dot com. At the time he rediscovered a passion for bringing his love of bikes to the masses – or in truth he felt guilty about the college journalism classes mom and dad had thought they’d paid for in vain.

Since the dot bomb couldn’t make payroll he decided it was better to make about the same money chasing his dream. He now looks forward to talking about himself in third person, while writing his own bio’s and working at a local Austin bike shop to the stars The Bicycle Sport Shop. Most of all he hopes his lack of talent and streak of incredible luck continues for all to enjoy.

Amstel Gold Race: Get The Beers In!