When I was searching for a bike shop here in Northern Italy, I would have never thought I would luck out and find the perfect shop. Going into CicliPozzi for the first time I was (and still am) a dumb non-Italian speaking American. Since August I have gotten to know the crew over there pretty well and have found the perfect hang-out…. after all, what bike shop isn’t the perfect hang-out?

Alessandro Pozzi and Davide Aiani are the two owners of one of the best shops in Northern Italy.

Located in Monguzzo, province of Como, and less than an hour’s ride from the Madonna di Ghisallo, CicliPozzi is more than your typical shop. It is great for friends to meet up to have a cup of espresso at the bar next door, and it doesn’t take much to coax Davide and Sandro to lock up for five minutes to join you.

Alessandro is a former four time Tour de France contender and eight time Giro d’Italia rider. He has competed in countless World Cups and even raced in the famed “Hell of the West” in Colorado back in the 80’s. He turned professional at the age of 21 for the Bianchi squad. Alessandro was an awesome climber, finishing 32nd overall in his debut Tour in 1979. Unfortunately, a downhill crash cost him a top 20 finish that year. It took me a while to find out this info, as all of the guys at the shop speak broken English, and didn’t even know the word “crash” until I taught them. I was pretty impressed, as well as a little bit envious to find out that he has raced alongside some of my idols including; Hinault, Fignon, Hampsten, Lemond and Indurain. Sandro went on to become the team mechanic for the Chateau d’Ax team when multi-Alp d’Huez winner and 1991-1992 World Champion Gianni Bugno rode for them. 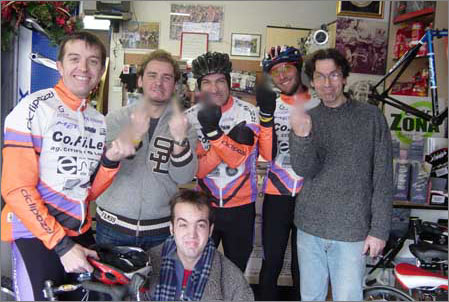 The Cicli Pozzi crew extend a warm welcome to all visitors.

During his last few seasons as a Pro, and while still wrenching for Chateau d’Ax, Alessandro and brother-in-law, Davide opened the doors of CicliPozzi in 1987. Davide was also an accomplished racer. Davide raced Dilettante 1, which is one step away from Pro. He was strong in the sprints, but also a hard worker all around which he brings to the front of our daily afternoon ride for most of the two hour “group ride” that he loves to blow apart by sitting on the front!

The afternoon shop rides are the best time of our day. Not only is it a chance to get a feel for how Italians spend their 3 hour lunch-break (a.k.a. Siesta-but don’t let an Italian hear that) you also have the opportunity to meet and ride with some great people. My coach and colleague in the “aspiring to be a pro cyclist realm” visited in November when we competed in three Cyclo-Cross World Cups. Josh got to know and become friends with many of the great people through CicliPozzi. Davide and Alessandro sent him back with an Italian National Champion Jersey that one of their club riders won a few seasons ago.

From the first time I stepped foot in there I knew I was in great company with this group of Italians. After few months of riding with these guys, and hounding them to use their internet for the first two months – while Telecom Italia took their sweet ass time hooking mine up at home – they started having me over for dinner. They have become like family for me, offering to help with whatever they can knowing I don’t have much to give back other than my appreciation. I can only offer my poor English speaking skills in return, but they’re happy to learn some American bike lingo. 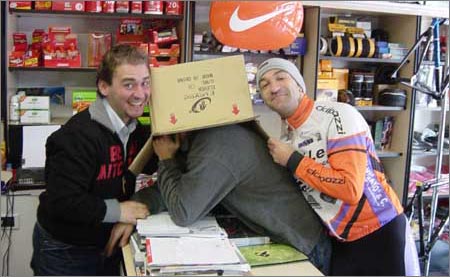 The area where we live, halfway between Como and Lecco, holds some of the greatest routes for road and mountain biking Italy has to offer. If you ever get the opportunity to visit, stop by to say “Ciao” to Sandro and Davide and go for an afternoon ride with the group who are more than willing to have an extra friend around.