He shakes his head as he walks away; it’s day five, the last clothes wash is tonight – and so is the 75 K handicap madison, but more of that later.

The stadium begins to fill, the amateurs race, the Pussycat Dolls blast, ‘Freak’ – it’s just a pity about the smell of garlic. 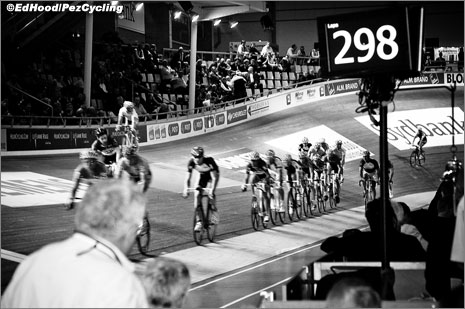 One of our guys has a head cold and has been told by someone that a fresh chopped garlic suppository is the answer, that’s as maybe, but don’t try it at home folks – not without a Nuclear Biological Chemical suit.

Despite last night’s healthy sampling of the big bottles of Merlot that Franco has been winning here, Tristan Marquet is flying tonight, with partner Donadio, he takes the flying lap and the 500. 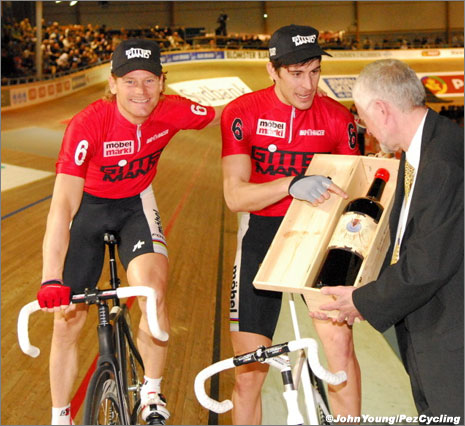 What better reason to go hard?

It’s the semi final of the Ballerup GP tonite, match sprinting for the six day men – Franco announces he’s going to do a Chris Hoy, go from way out and Rasmussen will never get round him – this prediction proves inaccurate and it’s a smiling Alex who’s in the final on the last night.

It was a big night for visitors; Jesper Skibby is heavier than when he was a pro from 1986 to 2000 with Roland, TVM and Team Jack & Jones – he had a good palmares, with stage wins in the Tours of France, Italy, Spain, Denmark and Holland, not to mention Tirreno – Adriatico. 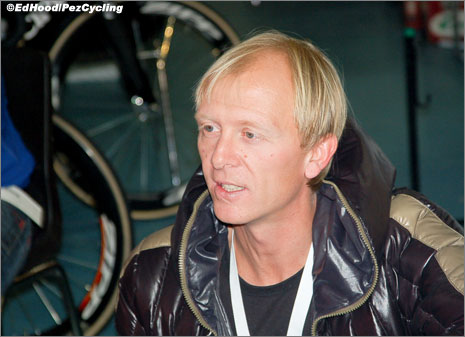 Dan Frost, former world and Olympic points champion was ‘in the house.’

Then Jakob Piil appeared, I was here when he won this race in 2005; a scaffolder in the ‘real’ world, he was pro 1998 to 2007 with RDM, Acceptcard, Memorycard, CSC, and T-Mobile – classy but injury prone, he took a Danish championship, a Tour de France stage, and a Paris – Tours during his career.

The derny madison was different, with the guys on lower gears than normal – 54 x 15, rather than 54 x 14 so as the change would not be so heavy on the legs. 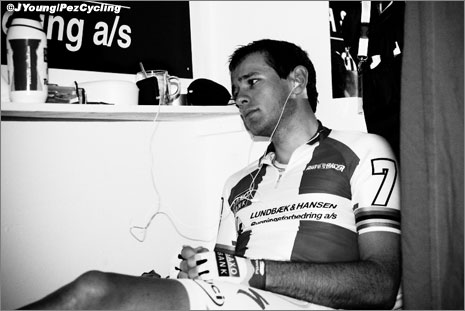 Michael Rasmussen enjoys a quiet moment with some music.

Alex swerved in during this one, with a suspected ‘defect’ – that’s Euro-speak for ‘puncture,’ but there were still plenty of bars under that tread band and Dirk fired him straight back up, once he’d checked the pressures.

Bjarne Riis was expected tonight; I was changing Michael and said to him; ‘when’s Bjarne coming?’

A second later I felt a hand on my back as the big man stretched over to give his boy a hug – he’s looking cool, tall, slim, tanned, well dressed. 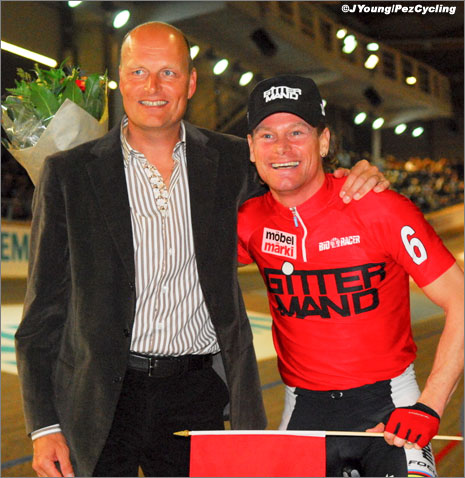 Riis was a pro from 1986 to 1999, with Roland, Lucas, Toshiba, Super U, Castorama, Ariostea, Gewiss and Telekom – to describe his win in the Tour as a ‘flash in the pan,’ is wrong – he paid his dues; but his career was during another time, with different values and ideas of what was acceptable.

Like it says in the song, ‘Flower of Scotland’ – ‘these days are gone now, and in the past they must remain.’

Iljo won the 15 lap derny, popping a trademark wheelie as he crossed the line. 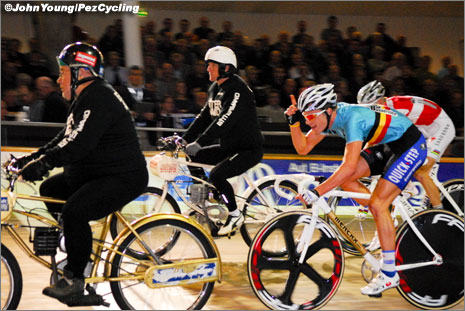 The 75 kilometre handicap madison kicked off and Wigfield’s 90’s Europop standard, ‘Saturday Night’ throbbed out of the PA, she got the night wrong but that line; ‘and not one minute left to lose,’ hit the nail on the head.

Alex & Michael, Franco & Bruno and Keise & Bartko were all giving seven laps to our two Michaels – Smith Larsen and Berling; with the final outcome counting for the overall, there was indeed, ‘not one minute left to lose.’ 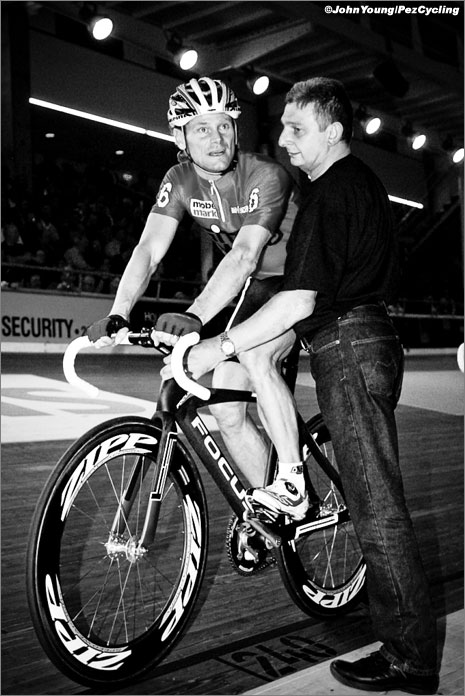 Bruno Risi in his final Six.

The speed was high from the start and it didn’t take long for Marc Hester to roll to a halt, wasted – although he did re-appear, later in the night.

Drama! Jesper needs to change bikes, the seat pin bolt has somehow forced its way up through his saddle. 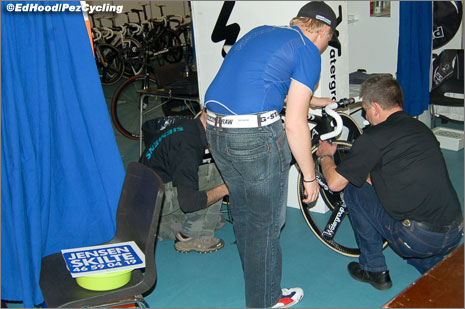 But not so fast, the ‘B’ bike is tooled up for the derny – there’s a rear disc to change and a chain ring, too.

Dirk is cool under fire, Jesper is hyper, eventually we give him the thumbs up, he swoops in, I drag him to a halt, he jumps on the fresh bike, Dirk hurls him back in to the fray – nice work guys. 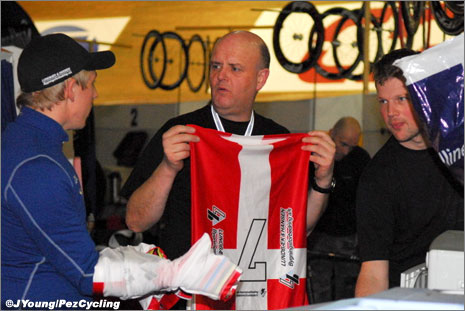 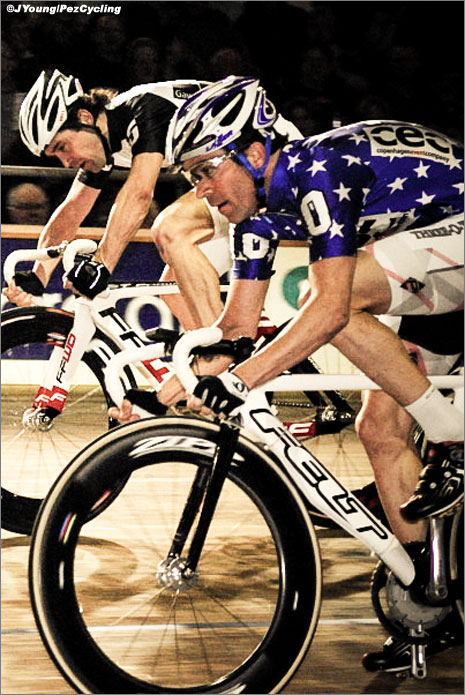 Hollywood covers him and despite big brother Michael riding shotgun on the front of the string, they can’t break the elastic – 53, and the speaker tells us that they’re 35 seconds up on track record pace – 40, and now Stam & Schep and Van Bon & Kreutzfeldt are on the zero lap, too – 35, and it’s the Dutchmen and Americans who take a lap to go on zero – 16, Alex launches a huge attack but to no avail, they’re two down and the string drags them back. 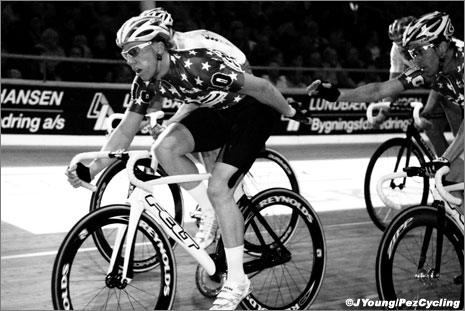 Holloway and Pearce put in a big effort, but came up just short on the line.

It’s all on the line, will it be a Hollywood finale?

Danny Stam’s arms stretch high, the gun fires, Daniel and Colby look pissed – what did you expect? this is a six, not Hollywood; happy endings are hard to come by.

Tuesday: Day Six
Keisse kicks back to a stand still on the finish line to shorten Bartko’s spell and get the timing right, so that he’ll be back in himself for the 20 laps to go sprint; it’s too late to take a lap and there are only two teams in it – Alex & Michael and Iljo Keisse & Big Bob Bartko. 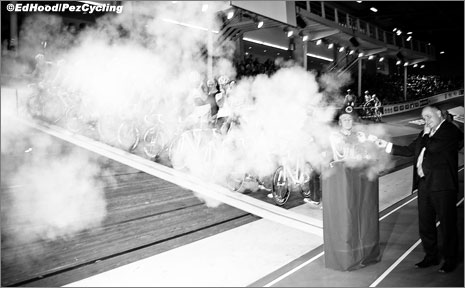 A smoky, loud start to the day.

Keisse goes in, Bartko, then it’s Keisse again; perfectly timed for the sprint.

Bob Sinclar’s ‘Love Generation’ pumps as Keisse wheelies that white Merckx across the line ahead of Alex. 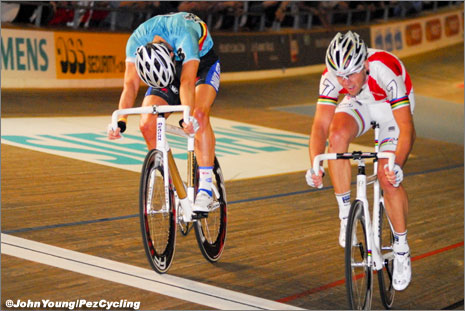 Keisse comes up just short, while Rasmussen is moments away from the celebration.

Ten to go, we can’t see the line, but we can see the whole crowd rise to its feet as Alex reminds us how he won the world scratch championships.

Inside the last five; Michael’s turn to do the track stand thing, Morkov is quick, but Alex is ‘The Daddy’ and they need his raw speed to ward off the sleek form of Keisse, who is in great condition. 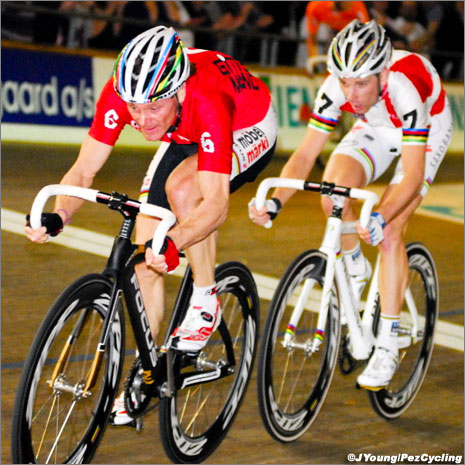 Michael’s in, Alex goes back in – last lap, no need to see anything; the roar of the Copenhagen crowd says it all – Alex Rasmussen and Michael Morkov are winners of the 2010 Six Days of Copenhagen.

It was a nervous day; time hanging heavy ’til that last chase. 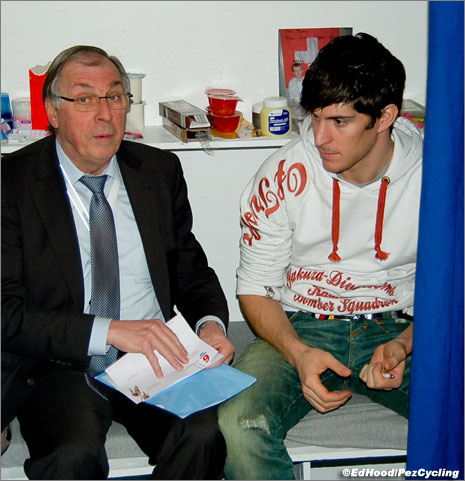 Patrick Sercu came a calling; not much happens in this world without his approval – and cut. But with 88 six day wins off 223 starts, it’s not like you can say; ‘what does he know?’

Franco nabbed sprint number four in the sprint series – that’s the one with the huge bottle of wine on the line.

Bjarne Riis looked cool as he was interviewed, hands in his pockets and a smile on his face.

Crisis! Michael had a pen mark on his shorts after an autograph signing – a quick sprint to the down stairs cabin to get clean ones was called for. That’s Michael – perfectionist. 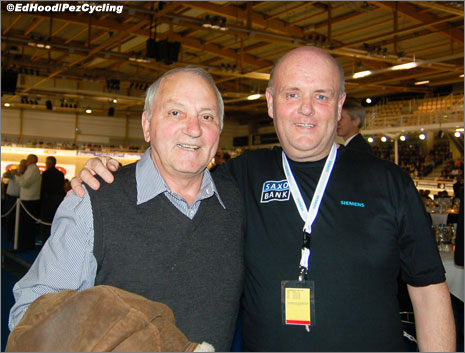 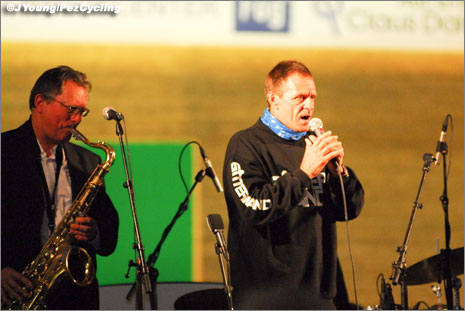 It was a full house, with huge cheers as Bruno won the derny. Then it was time to hear a derny king from the past, as Danny Clark accompanied the band for a few numbers – all that daily practising with his karaoke machine is paying off.

The press were at Alex and Michael’s cabin constantly, tonight – there’s no chance of a quiet moment to get your mind right for the big effort in this sport.

The big guns minds weren’t on the time trials and it was Van Bon and Kreutzfeldt doing the winning.

The team devil, the boys were out early, they looked nervous; Bartko looked as cool as a well fed Grizzly. 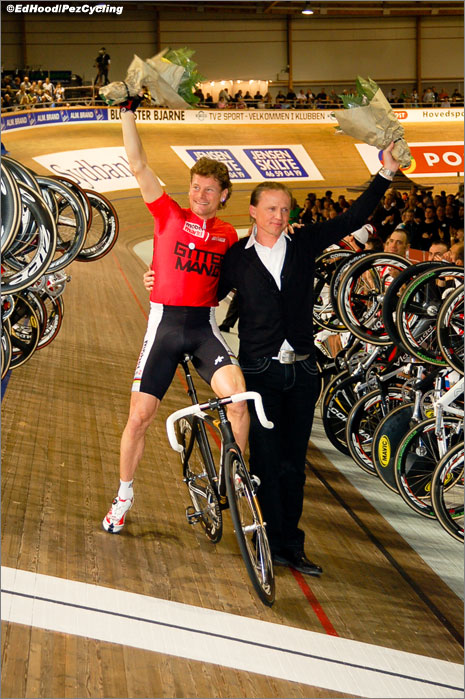 Bruno won the derny sprint; then it was time for his farewell ceremony; former partner, Kurt Betschart had been flown in, there were speeches, arcs of wheels – this sport will miss the man, for sure. 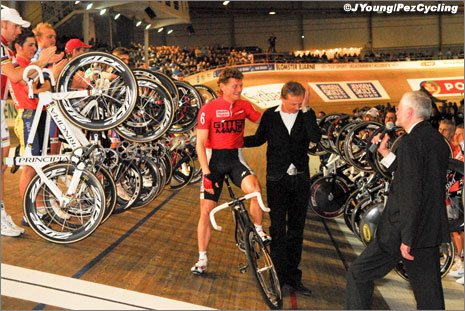 It was an emotional farewell.

‘We had good fights, big fights but fair fights,’ says the great man.

The balustrade sprint; Hollywood was at his best, including a jersey over the head routine and bows to his adoring public.

The guys were about to go to the line but still the mics kept coming.

The starting cannon sure was loud and smokey, there was no doubt that the game was on.

It was fast, sharp and Keisse & Bartko would have grabbed it if they could.

Keisse’s hand slings would send an F 16 off a carrier flight deck and Bartko lives up to his nick name, ‘The Terminator’ hurtling round, smooth as an automaton. 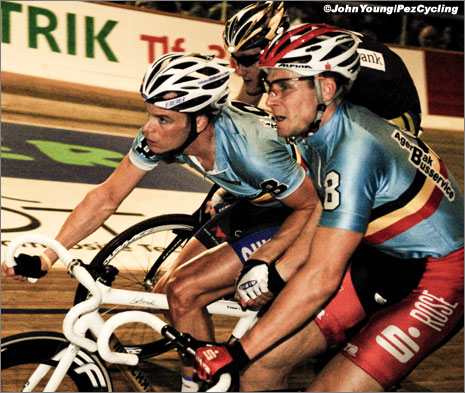 Keisse and Bartko got close, but couldn’t quite do the deed.

Our one moment of drama came with 27 to go, when Alex careened in for a bike change like he was riding a bucking bronco.

If you were much lighter than me, he’d just drag you round the track, like a doll – but I hauled him to a halt and Dirk stuck him on a fresh Principia in super quick time.

After that, there was just the finale and the post race chaos; but that’s not so bad – when you win. 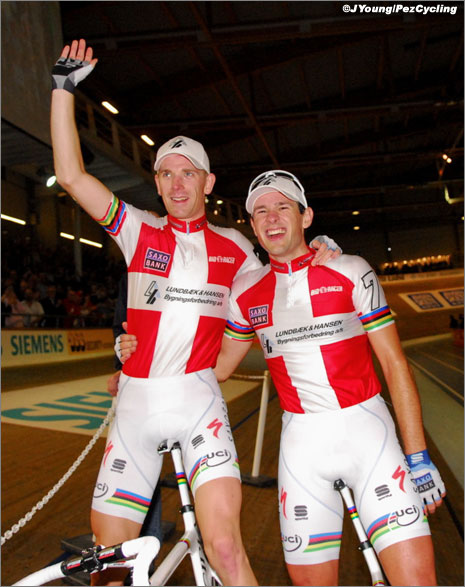 The happy pair: Morkov and Rasmussen.

A great end to the season; but there are still a lot of questions to answer about season 2010/11 – which races will survive? what will the programme look like? who’ll be Franco’s new partner? 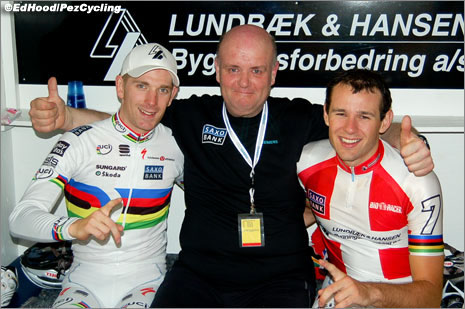 Ed and his boys.

Hopefully, we’ll have some answers for you by the time Grenoble comes round in October – see you there?