You don’t need an excuse to climb your favourite mountain road, but how much better is it to have a good reason to give it your all and find out your time? My local favourite; the Coll de Rates now has a permanent timing device with a result service web-site, so I had to find out more.

The Coll de Rates is the hill everyone climbs in this part of Spain, it is the god of climbs in the area, it’s not the highest, but it definitely is one of the hardest, we all have to climb it from time to time just to see what’s in the legs. Sadly for me, the timing device is on the (easier!) other side of the Coll de Rates, from where I live so I’m never going to be able to ride it fresh, that’s my excuse and I’m sticking to it. 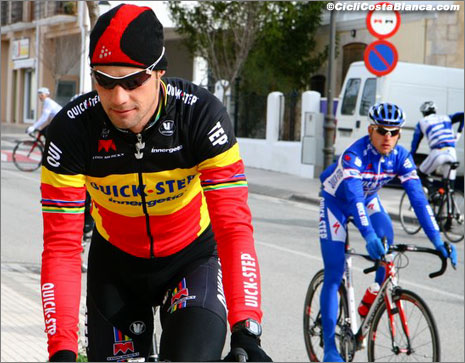 Tom Boonen showed up with some teammates on the opening day.

The timing device was officially opened on Sunday the 10th of January this year by the Mayor of the start village of Parcent and since then it’s been visited by lots of pro and amateur riders trying to post their fastest times. Ruben Plaza and Tom Boonen with a few other pro riders turned up on the opening day, Plaza returned a time of 17 minutes 37 seconds, not the fastest so far but not hanging about. 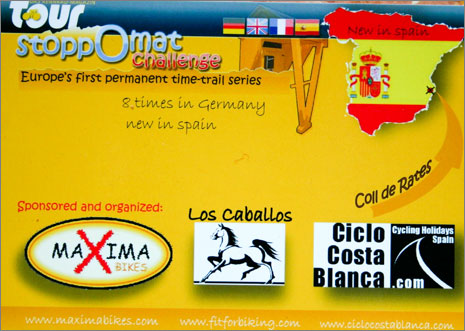 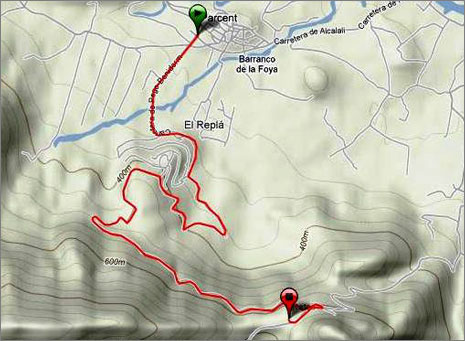 The climb itself is 6.92 kilometres long; climbing from 248 metres with a height gain of 365 meters, one of the problems on the assent can be the wind, on the last section the wind could be in your face or giving you a helping hand up the hill!

The day I crossed the Coll I met one of the men behind bringing the Stoppomat system to the area; Terry Kerr of Ciclo Costa Blanca. His cycling holiday company along with Maxima Bikes and Sporthotel Los Caballos are the main sponsors of the machines along with the original German sponsors. 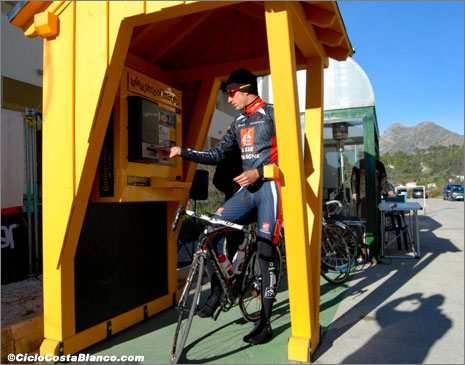 Ruben Plaza also made an appearance on the first day and put in a solid time. 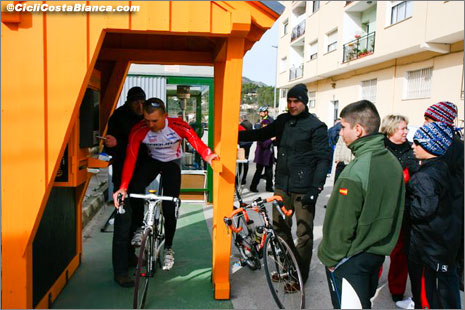 It wasn’t just the ProTour riders though – everyone came out to try the Stoppomat.

Terry explained to me how it all works: “The rider takes a card from the machine at the start and prints his name, age, sex, where they live and if they are in one; their club. The card is then stamped with the date and time and the rider heads off up the climb.” That’s the easy bit and personally I was glad to see they put the date as my form isn’t what it could be! 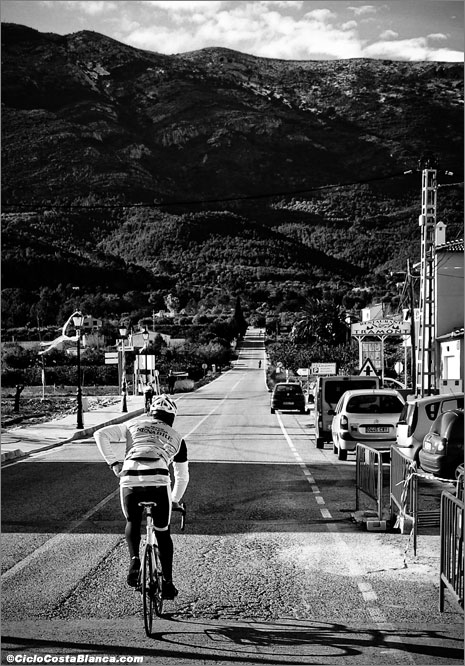 The view up, up, up from the start.

And what happens at the top Terry? “There is a similar machine at the top of the climb where the rider has his card punched with his finish time. The deposited cards are then collected once a week and the times uploaded to the Stoppomat web-site. The riders can check-out their times and compare to all the other riders and specifically to their team mates or age group etc. They can also print off a certificate of their ride.” 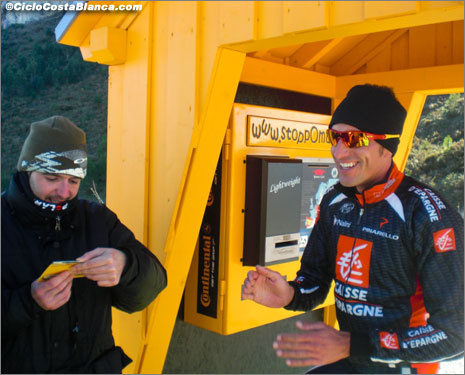 Ruben Plaza at the top of the climb. 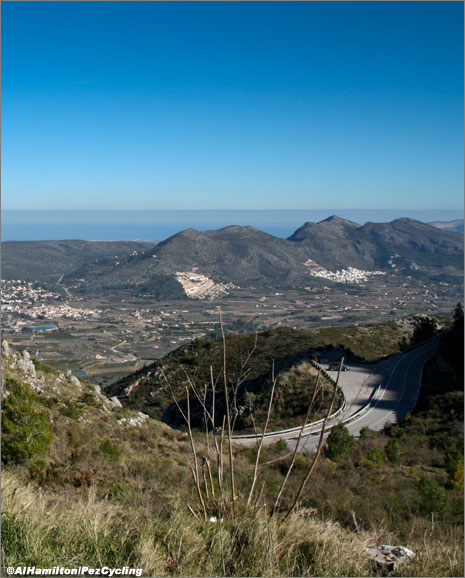 Terry explained to me that there are eight other timing systems, all at the moment in Germany, but he wants’ there to be a few more machines so that there will be a “Spanish Challenge” a permanent time-trial series. 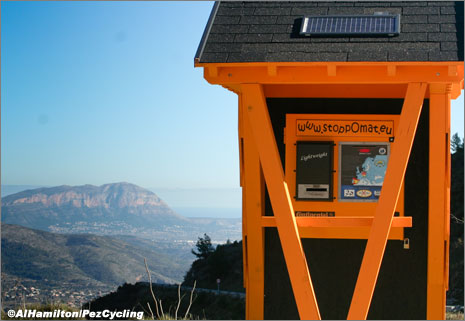 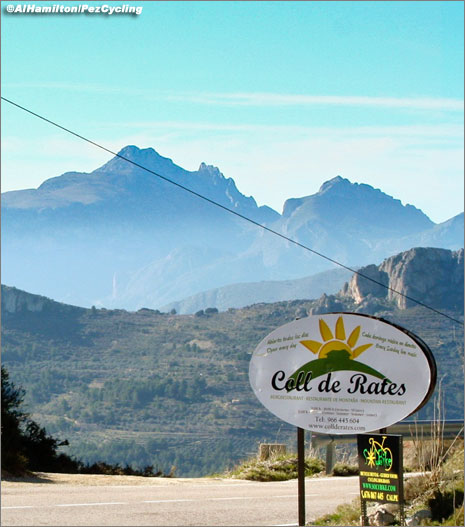 So it was time for me to test myself against the torrid climb, to battle the elements, to push my body to its limits. Well, another coffee and maybe some toast with tomato and olive oil would be needed to strengthen these old limbs first. I enjoyed my ride back over the Coll, or in other words – I didn’t try very hard. You can look on the Stoppomat web-site for my time if you like, but you won’t find it as the card came home in my pocket. I’ve got one big question for Terry, “why can’t you do the timed ride down the hill, just for me?” 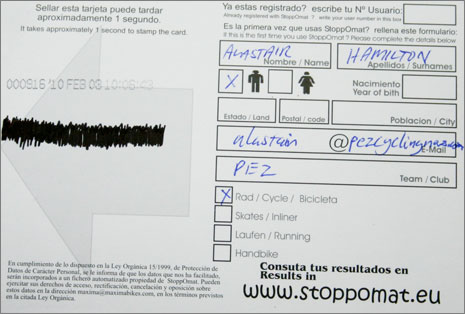 The back of Al’s non-punched card.

***
Check out the Stoppomat website: the Spanish version is at Stoppomat.com and the German version is two letters different: Stoppomat.eu

My apologies for the two misspelled Ciclo Costa Blanca credit pictures. They are of course CiclO and not CiclI. This is Spain, not Italy.