”Boot camp is over, boys” The world’s #1 ranked team was alive, well, and all smiles yesterday as Bjarne Riis presented to the world’s cycling media and PEZ his boys in red, black and white for 2006…

Pictures and Words by Andrew Rogers
I thought last night’s stay at my sister’s llama ranch was exotic, but that was just a warm up for yesterday: right before I entered Solvang, I spotted a flock of ostriches running beside my car in a field where cows usually graze. Hmmm… where am I and what did I eat for breakfast? 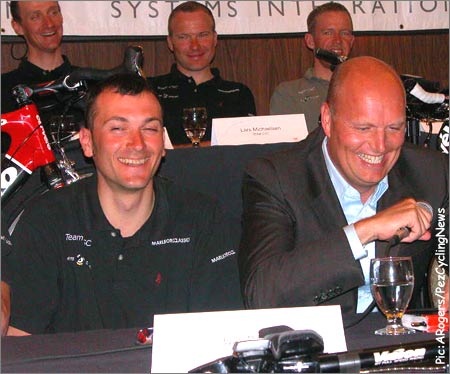 No fake smiles here – the positive team attitude is genuine.

Then I realized what one needs to do upon entering this Danish Oz-like burg: for just like any theme park city, you must suspend all belief of reality and yet also believe it deeply if you truly want to enjoy the ride.

And so it’s similar with CSC: I wanted to suspend my belief that this team really is a family, and run amok with dysfunctional Osbourne-like personalities… But how could I when this team is lead by the soft spoken and highly charismatic, attitude-adjustment sage Bjarne Riis and his simpatico staff? Hell, even his outback militiaman who whips them into shape for 10 days in the December Danish hinterlands, (Mr. Christiansen), was on cue wearing his equipment-laden backpack, and eager to please, insisting “don’t hesitate to ask us for anything, really.”

I suspected someone or Santa is liberally sprinkling “sincere dust” into the team’s morning mueseli and the spell would be broken by lunch – I was wrong, again. The CSC smile never faded all day and I think I know why…

Arriving 2 hours early at the CSC base camp hotel in Solvang, I ducked into the shade of its restaurant to sip a quiet ice tea while nursing my sunburn (it’s over 85 degrees) and found myself inside the CSC feeding frenzy: pasta salad, spinach, chicken, the usual culinary suspects. The waiter immediately waved me over to a table and gave me a plate and before I could say, “press” he
nodded and shoved me in front of Carlos Sastre, who didn’t notice. How can I refuse?

Besides the media meet ‘n greet, the boys were dialing in bikes and equipment.

Surreptitiously scanning the scene I catch Giovanni Lombardi’s gaze and we ring out a double “Ciao” recognizing each other from our dual job of covering for Super Mario in past years (he as Cipo’s go-to man and me as Specialized’s photographer shadowing Mario and his state of the art personalized equipement).

As I’m getting ready for the press conference to introduce CSC 2006 team and it’s Tour of California’s team, I spot Ivan Basso enjoying the same vice as me: eating chocolate chip cookies, but he examines and sniffs his first chasing it down with coffee (look for him to endorse Oreos in Italy the way he ate them).

“It’s not only the best team in the world, its the nicest…” – Bjarne Riis.

Some Serious Fun
Leaving, I notice Jens Voigt, Stuart O’Grady and Giovanni animated and chatty like old friends – make no mistake about this team, their happy vibe thrives like a huge family, seriously, and it looks like serious fun.

At the press conference, Bjarne took over, first dropping down his philosophy like “It’s not only the best team in the world, its the nicest…”. That would sound naive to most but I found myself getting sucked in to their deep vortex of innovative ways of creating a secure new cycling paradigm in a very stressful and insecure world.

Sincere, communicative, funny and unpretentious was the mantra of the day, and Bjarnes was including the whole freaking CSC COMPANY, for he and all of them expect great results from top to bottom, from Tour of California to the Tour de France, and they want it with solid values and fun, how strange to hear that from a team and it be meant!

No stress here – late winter sunshine and racing in next week’s Tour of California are easy to smile about.

When I asked Bobby Julich about his personal stake at the Tour of California, he bluntly admitted, “I don’t think I have the legs to put me on top of the podium but I know who – and I’m not telling you – is riding very very well right now. I’d be very disappointed if CSC didn’t have him on top of the podium” (….think US rider).

David Zabriskie, possibly the most laid back yellow jersey rider ever, smiled and effused his take on it: “Berkely was my backyard for 4 years, I’m ready… and I LOVE this state, and this country, participating in this to me is a BONUS.”

Bjarne asked Christian Vande Velde, the last American rider for his take: “I remember seeing all those Euro riders as a boy in Philly and Chicago… and now kids here can see all the greats like Jens and Stuart and that may be what builds more American races in the future…I’m very happy to be here and ready.”

Christian spoke for everyone present, looking around at all the sunburns and smiles, we all headed off to interview the riders before we all hung out at the generous Skagen Watches cocktail reception complete with a bar and free watches. If you go to Europe this year, look for Ivan Basso’s limited edition Skagen watch, think super slick Euro chic in various colors (I’m an old Skagen fan).

Coming up: Interviews with Bobby, David, Jens, and a chat with Ivan….and an unusually vocal Bjarne…