For many, a weekly or monthly injection of cycle sport was all we could look forward to. Live TV? No chance, maybe a half-hour catch-up of the Tour de France on Saturday. The magazines of the time fashioned our love of the sport, Ed Hood goes through his extensive collection for some history of the printed art. 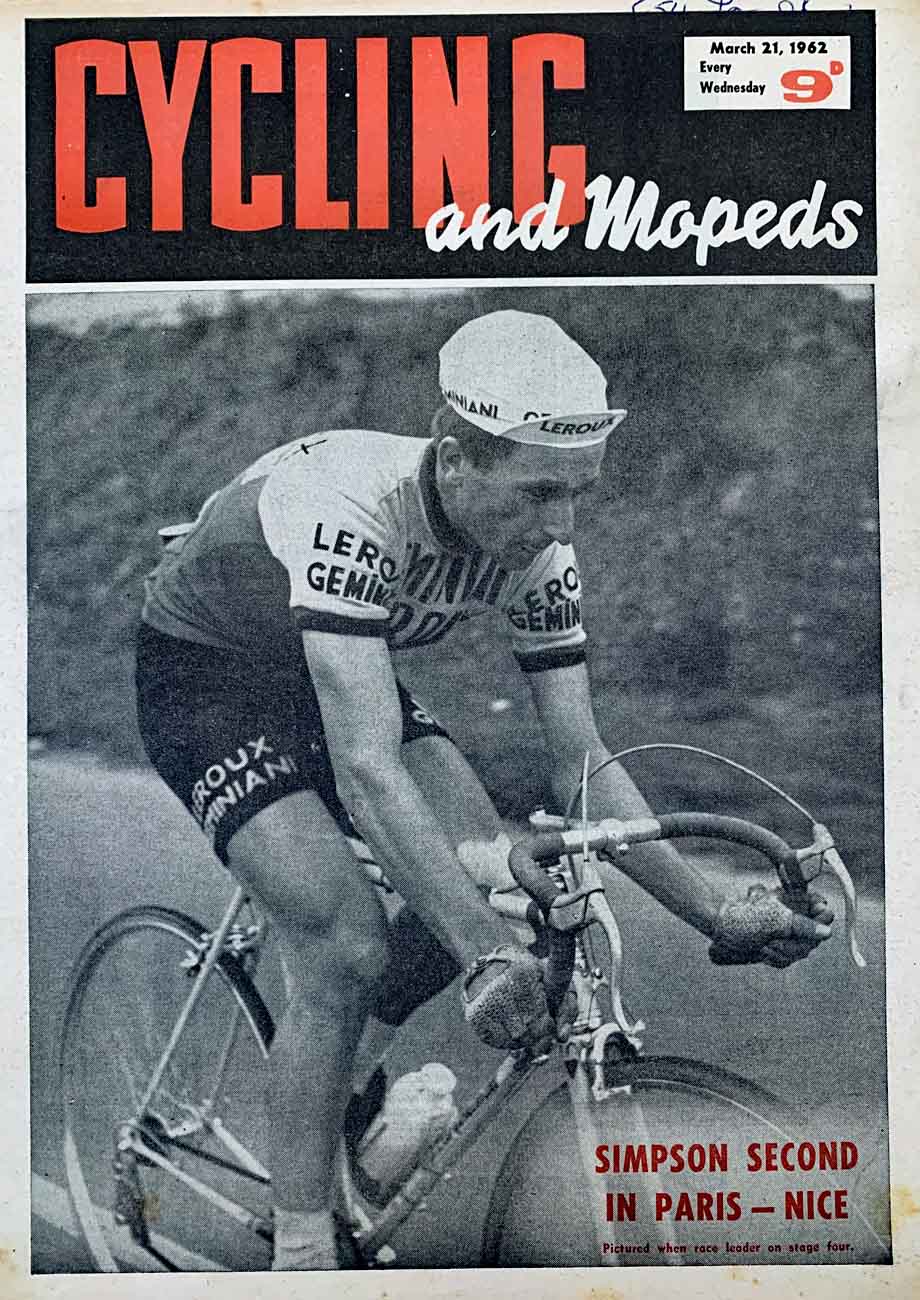 Tom Simpson on the cover of Cycling and Mopeds

Our main man, Richard Pestes asked his band of hacks about what we were going to do with all that lockdown time the Corona virus has kindly gifted us. I intimated that I was going to immerse myself in my collection of ‘Cycling Weekly’ magazines for the duration. 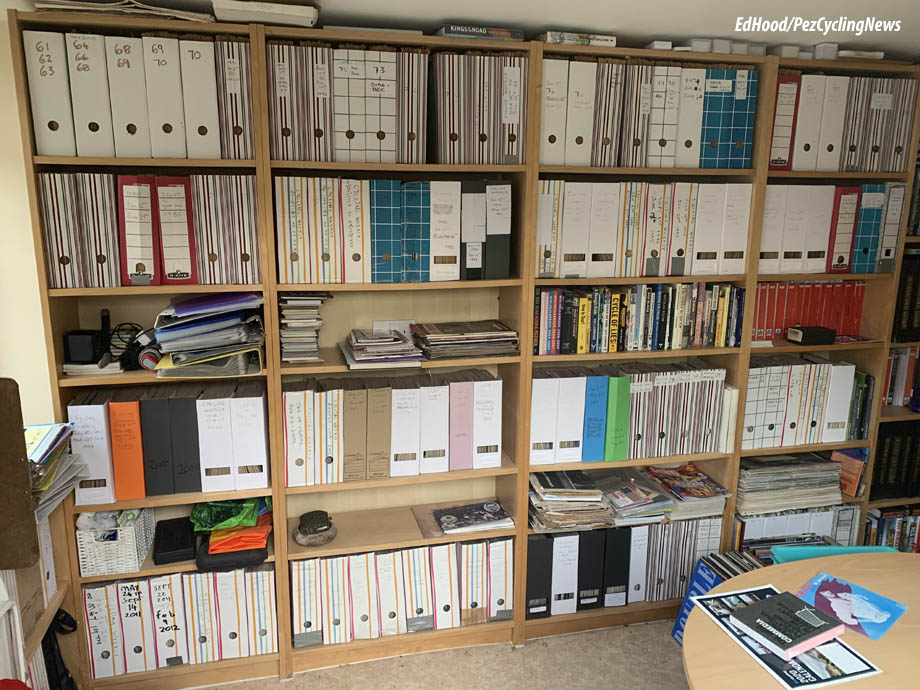 But that got us to thinking about the part that cycling magazines played and continue to play in our love and appreciation of our sport.Back in those days before Sir Tim Berners-Lee introduced ‘www.’ into our vocabulary, ‘Cycling Weekly’ was virtually the only Media available in the UK which informed you what was happening in the world of cycling. If you were lucky ‘The Daily Telegraph’ might have international results of a Monday and did report on the Le Tour, stage by stage whilst Scottish local papers would carry some results but in the main, it was down to ‘The Comic’ as everyone called ‘Cycling Weekly’ back then. Initially I used to read other folk’s copy and was gifted a pile of 1969, 1970 and early 1971 copies by a friend; I began ordering my own edition in the summer of 1971.

My first copy was July 17th 1971, a historic edition with full reports of Ocaña ‘exploding the Merckx myth,’ grabbing yellow from the Belgian then crashing out. 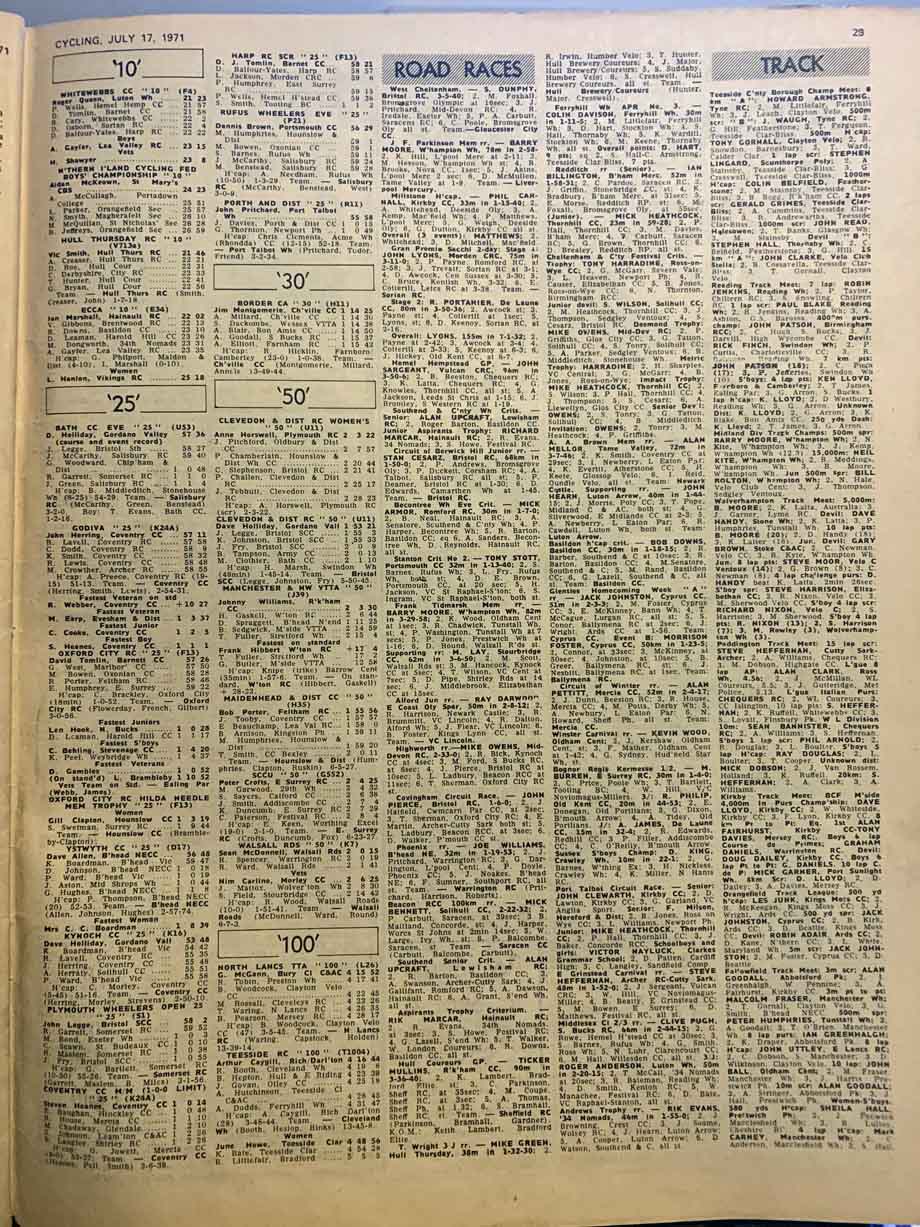 The magazine carried a massive results section with just about every race result in the UK listed – road, track and time trial. 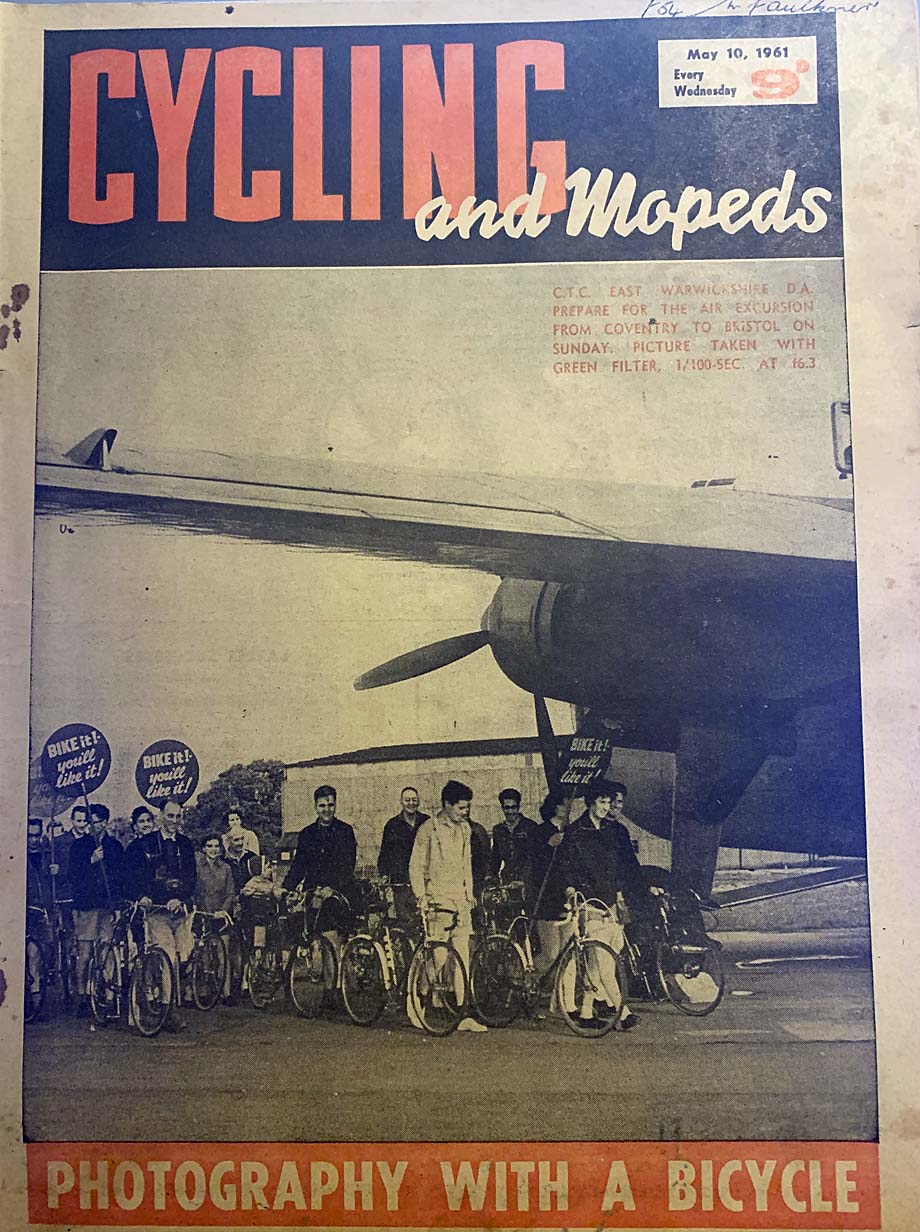 I haven’t missed an issue since then and have accumulated earlier editions over the years with the first being May 10th 1961 when the magazine was called ‘Cycling and Mopeds’ and was less race oriented than the 1971 version with a lot of touring articles. 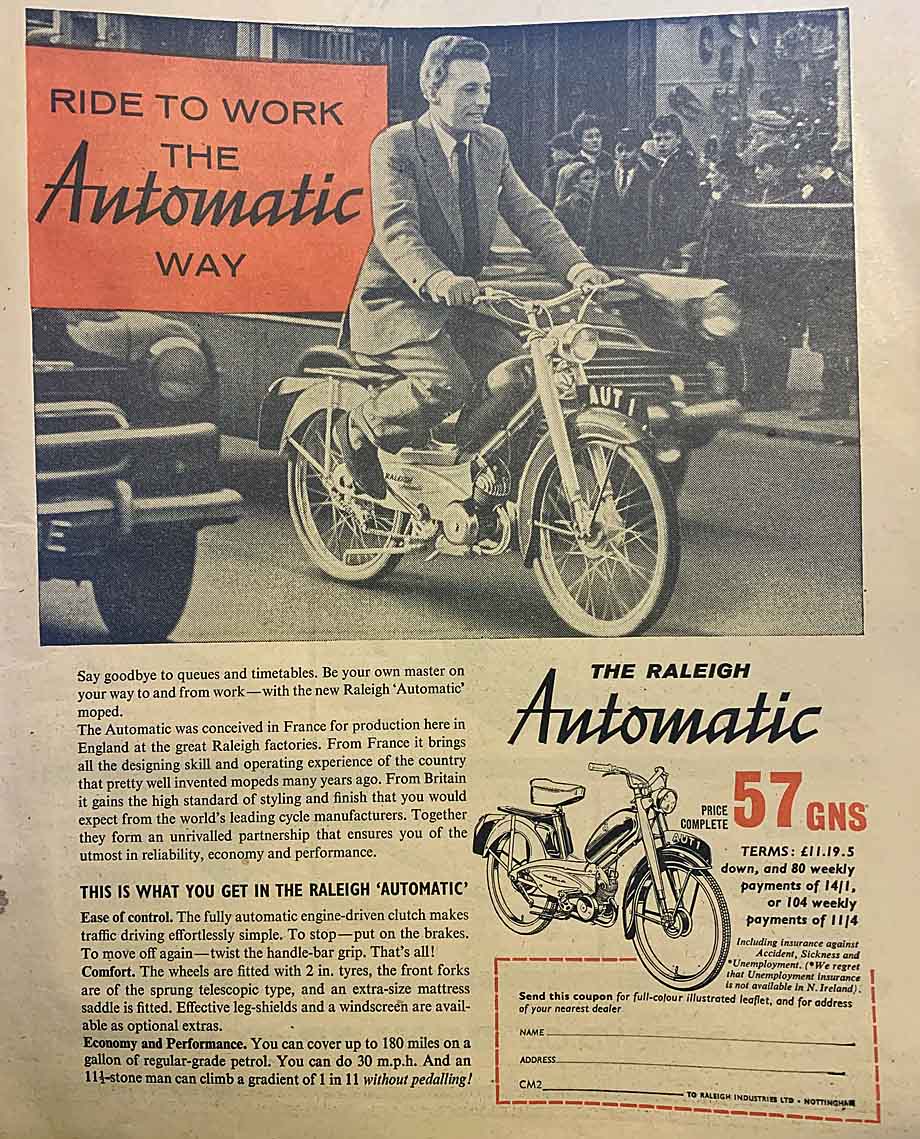 And ads showing you how sharp a dude you could be if you owned a Raleigh Moped. 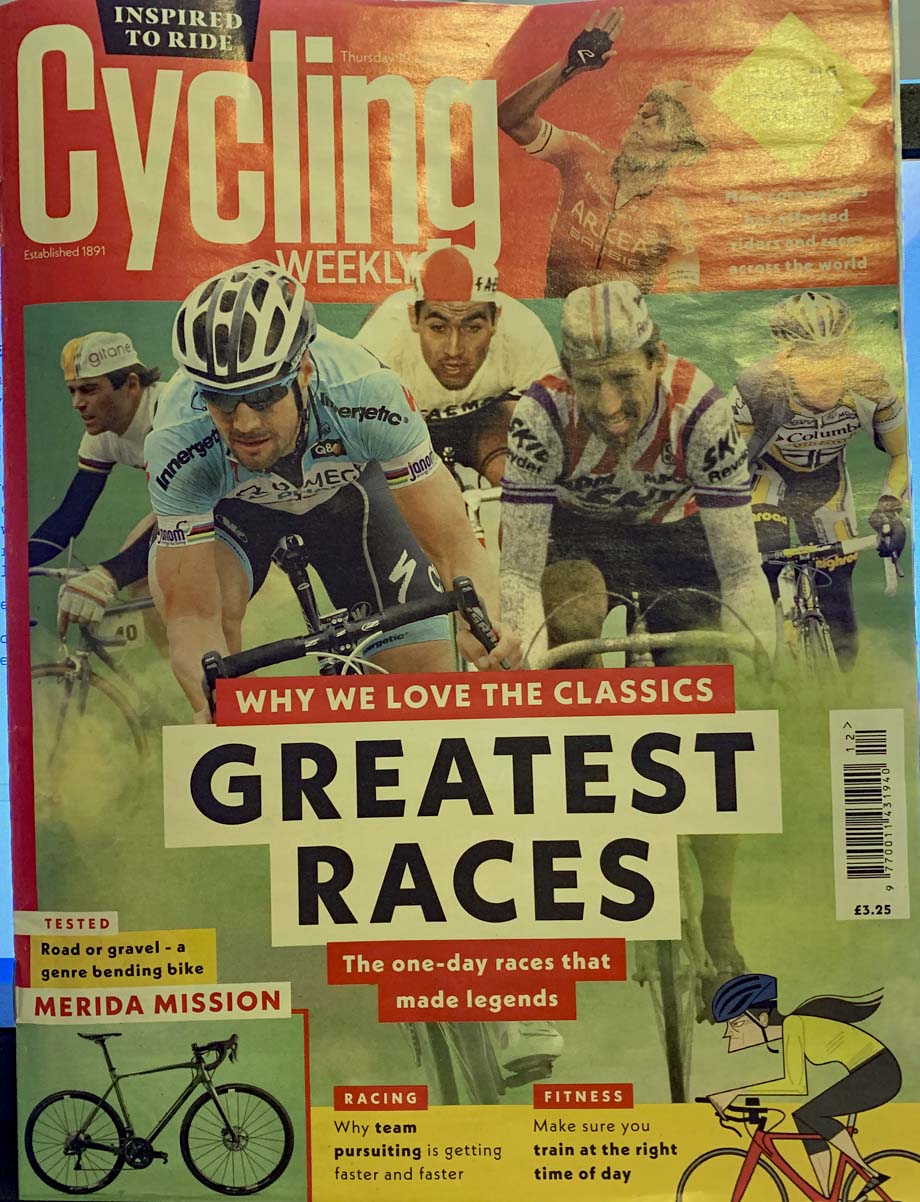 ‘Cycling Weekly’ now, if your passion is racing, is a decaffeinated version of its former self, more a ‘lifestyle’ magazine with a big emphasis on sportivs, equipment tests, turbo workouts and lots of big colour shots. I still buy it because it throws up the odd result or situation that makes me think; ‘that’s interesting.’ In any discussion of cycling magazines there are a number which simply must be remembered. If you speak to ‘Anglo’ pros of a ‘certain age,’ many will cite as one of their primary inspirations the pictures in those glossy French magazines of the 60’s and 70’s, in particular the Miroir du Cyclisme. 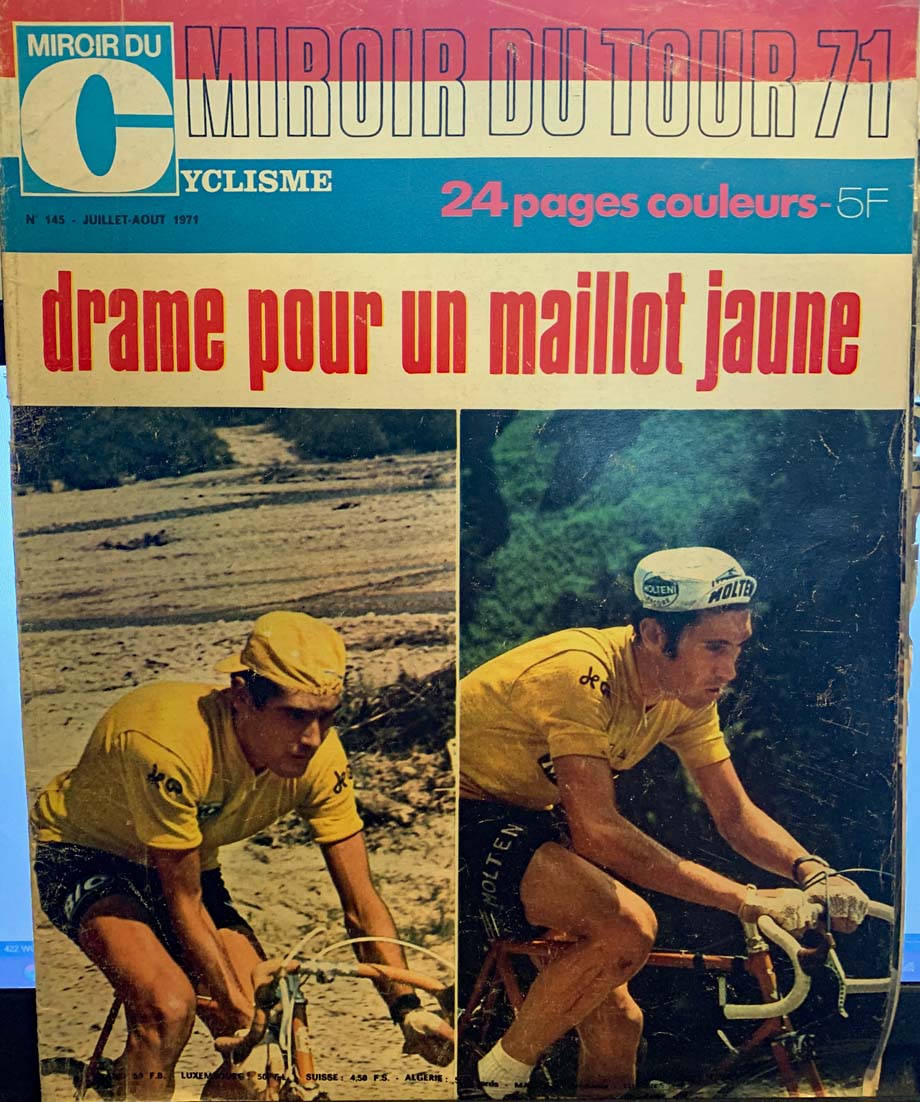 I began to subscribe in the summer of ’71; ‘drame pour un maillot jaune,’ wonderful words. French and Italian are the best languages for writing about cycling. I drooled over the glorious colour pictures and wrestled with my schoolboy French to translate the captions. They came in to the UK via a small specialist newsagent in London, ‘S. Solosy’ of Charing Cross Road, London. They came rolled tight in brown paper wrapping and you had to flatten them out; to our postie they must have looked like ‘adult’ mags – he would have thought it was a right little weirdo lived at 27, Cross Street. The magazine ran from 1961 until closing some 474 issues later in 1994 when the managing company went bust. 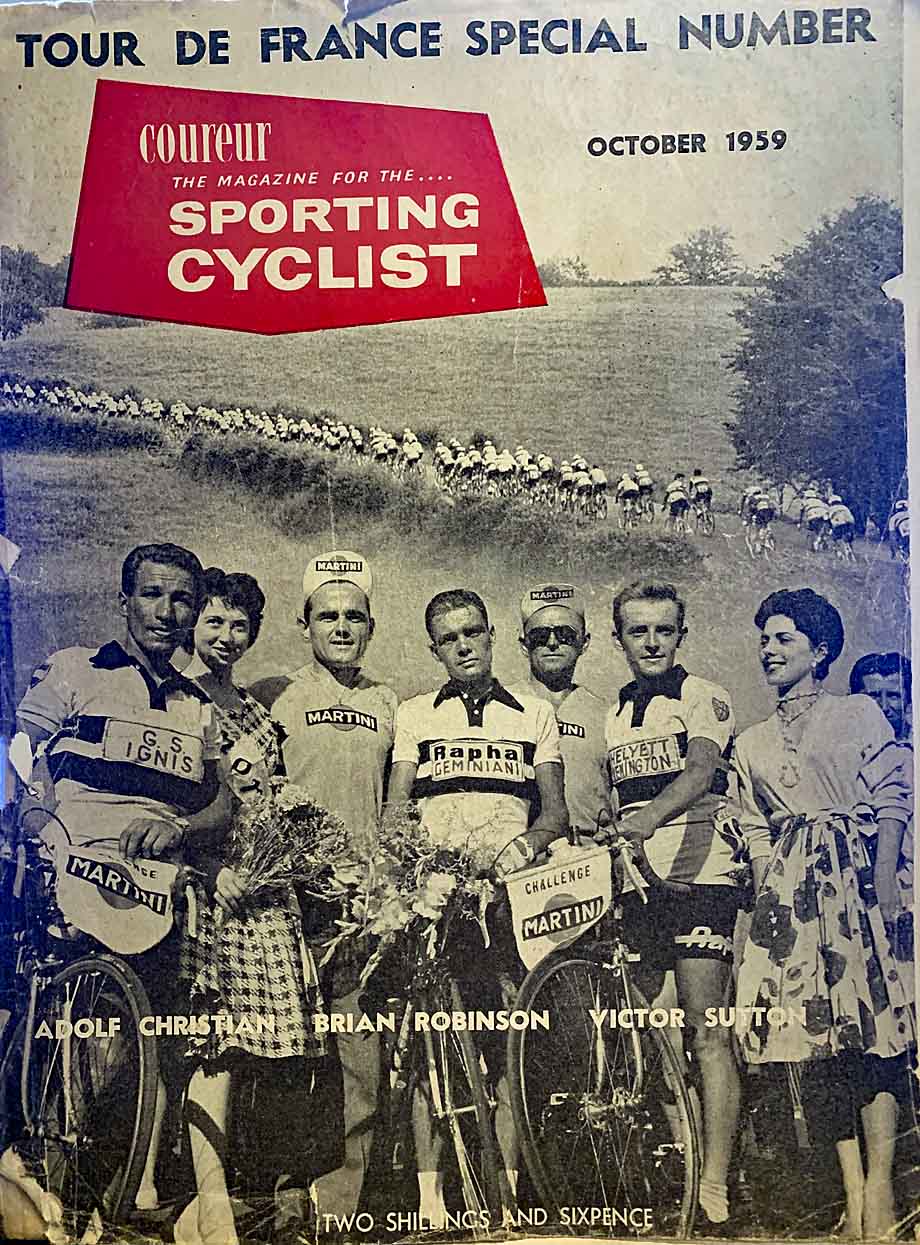 But there was a man in the UK who decided that there was a market in the UK for a specialist bike racing mag with no touring or mopeds within its pages. His name was JB Wadley, he worked on and off for ‘Bicycling’ magazine from 1935 until it closed in 1955 and in 1956 he launched ‘Coureur’ which became ‘Sporting Cyclist’. I ran until 1968 with much of the copy and many of the photographs coming from Wadley; who would stick his typewriter in his saddle back and pedal off in search of stories. Road, track, time trials, cyclo-cross, there was no branch of the sport he wasn’t an expert on and was on first name terms with many of the stars of the day. 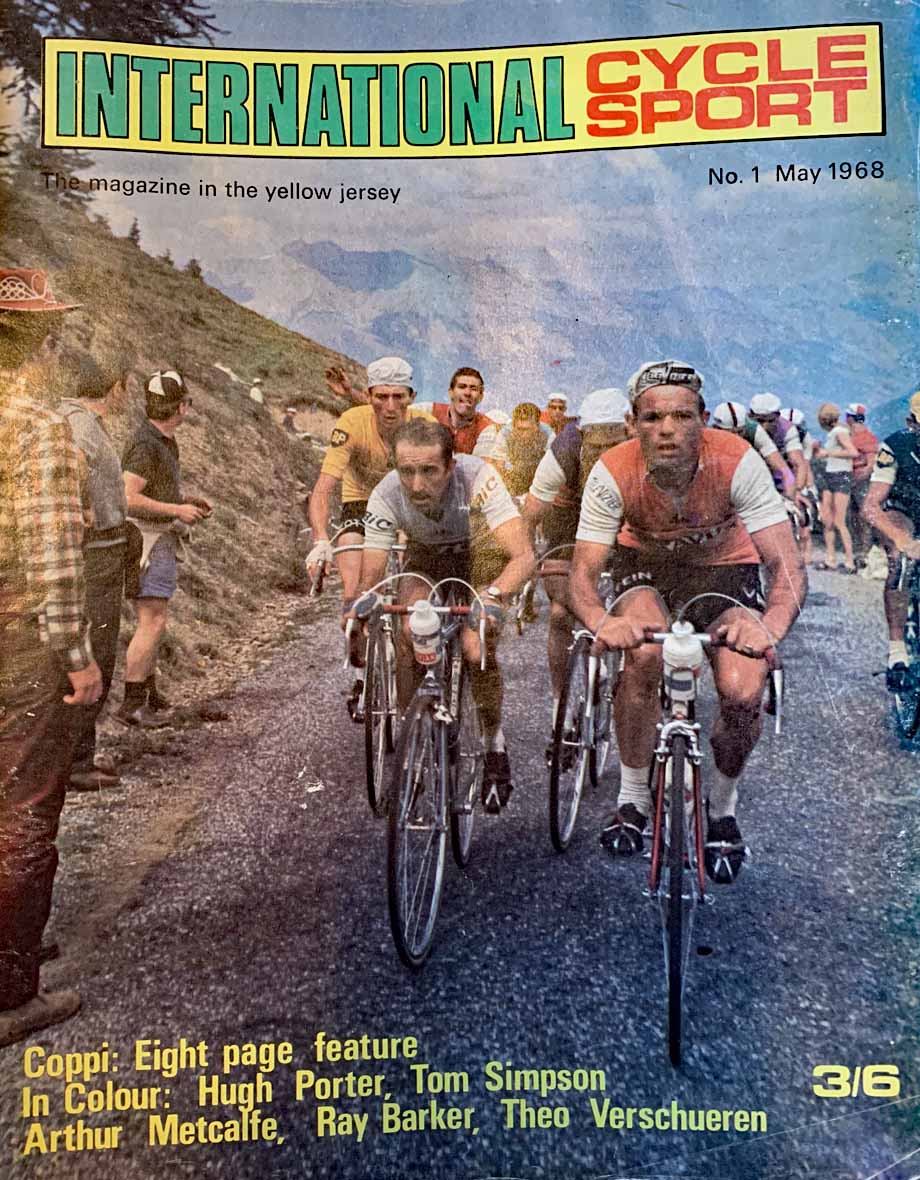 His next venture was ‘International Cycle Sport,’ full colour with men steeped in cycling like John Wilcockson and Ren de Latour providing copy to bolster that of Wadley. Issue One is dated May 1968 with the first article by Wadley, covering the Antwerp Six Day, followed by a Coppi tribute from Rene de Latour. The mag ran until 1984 by which time Wadley had been fired and it was a shadow of its former self albeit still with great photography. I loved the early editions, going to pains to get back copies from edition one and devouring them – latterly I would just browse them, then file them. 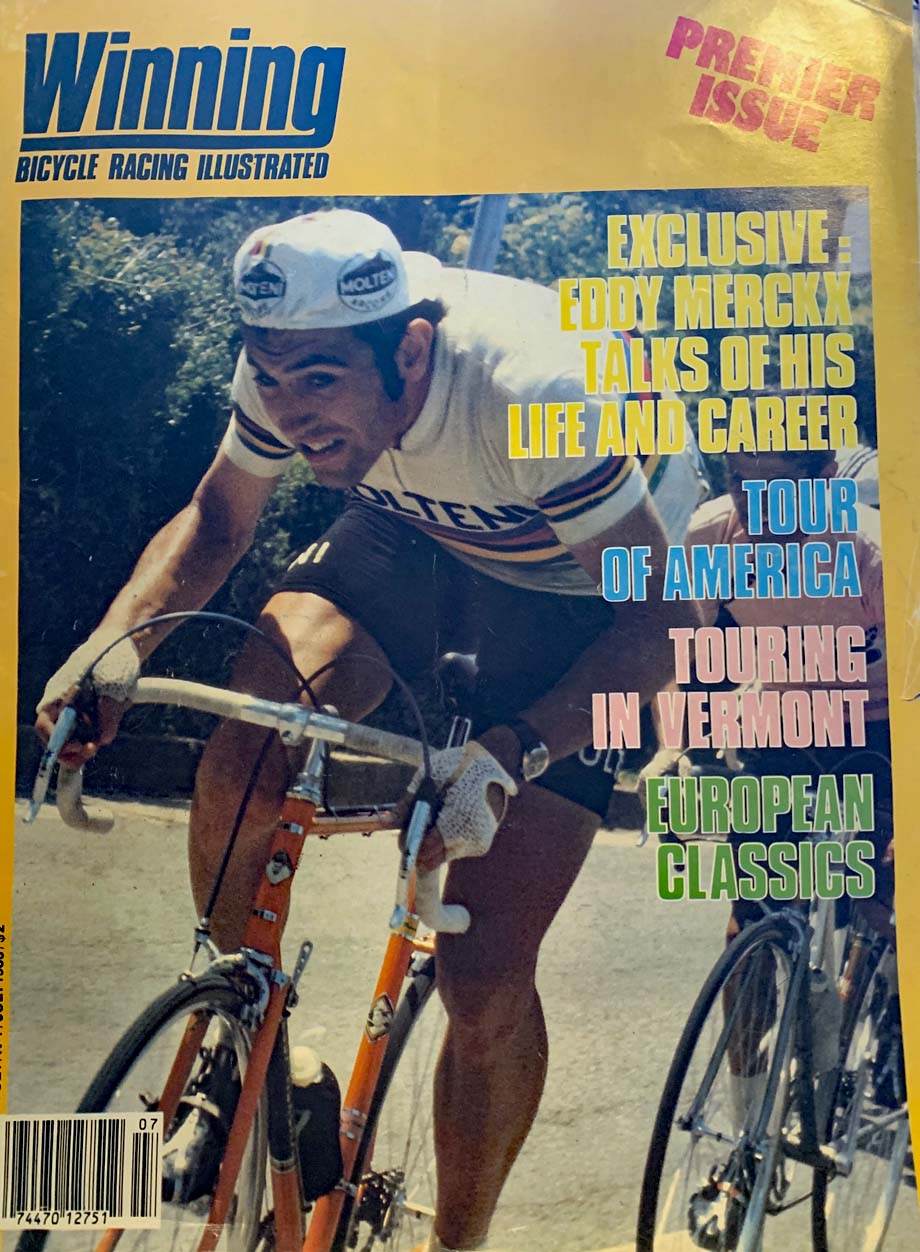 Winning – US and Europe

The first issue of ‘Winning’ was published in 1983, perhaps the US answer to the Wadley mags with excellent coverage of US races and the European Classic races. Issue one had a multi-page interview with Eddy Merckx and in-depth coverage of the Milan-Sanremo and Tour of Flanders. I loved the pictures of US races, they looked so glamorous and exotic – those 7-eleven strips were just the coolest. The covers featured, without exception, great images and the content was always most readable. But by the time the UK edition was launched it just wasn’t the same magazine and the end came in 1998. For me, the early US editions are still the best. 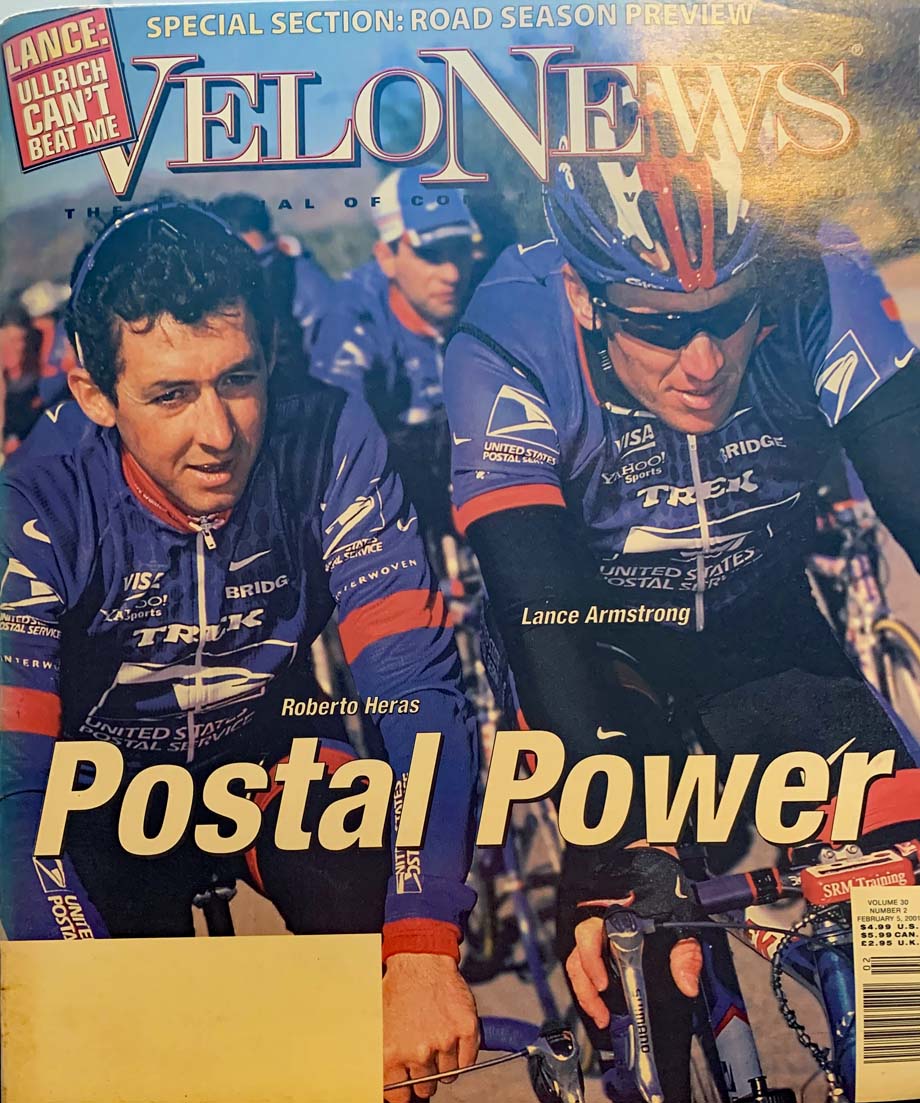 Of course, any piece involving US cycling mags is incomplete without mention of ‘VeloNews’ – I used to buy it from the Edinburgh Bicycle Co-op back in the 90’s but when they stopped stocking it my collection ended. I just had to feature one with Lance on the cover – inside we read that Postal have let go Frankie Andreu, David George, Marty Jemison, Patrick Jonker, Kevin Livingston and Stive Vermaut, I don’t remember the last named but sadly he died in 2002. We’re told that the team budget for 2001 was $7.5 million; that wouldn’t go far in 2020. Nice interviews too with Toni Cruz and Rahsaan Bahati. ‘VeloNews’ carries on, just like ‘Cycling Weekly’ but I haven’t seen one on a UK newsstand or in a bike shop for a long time. 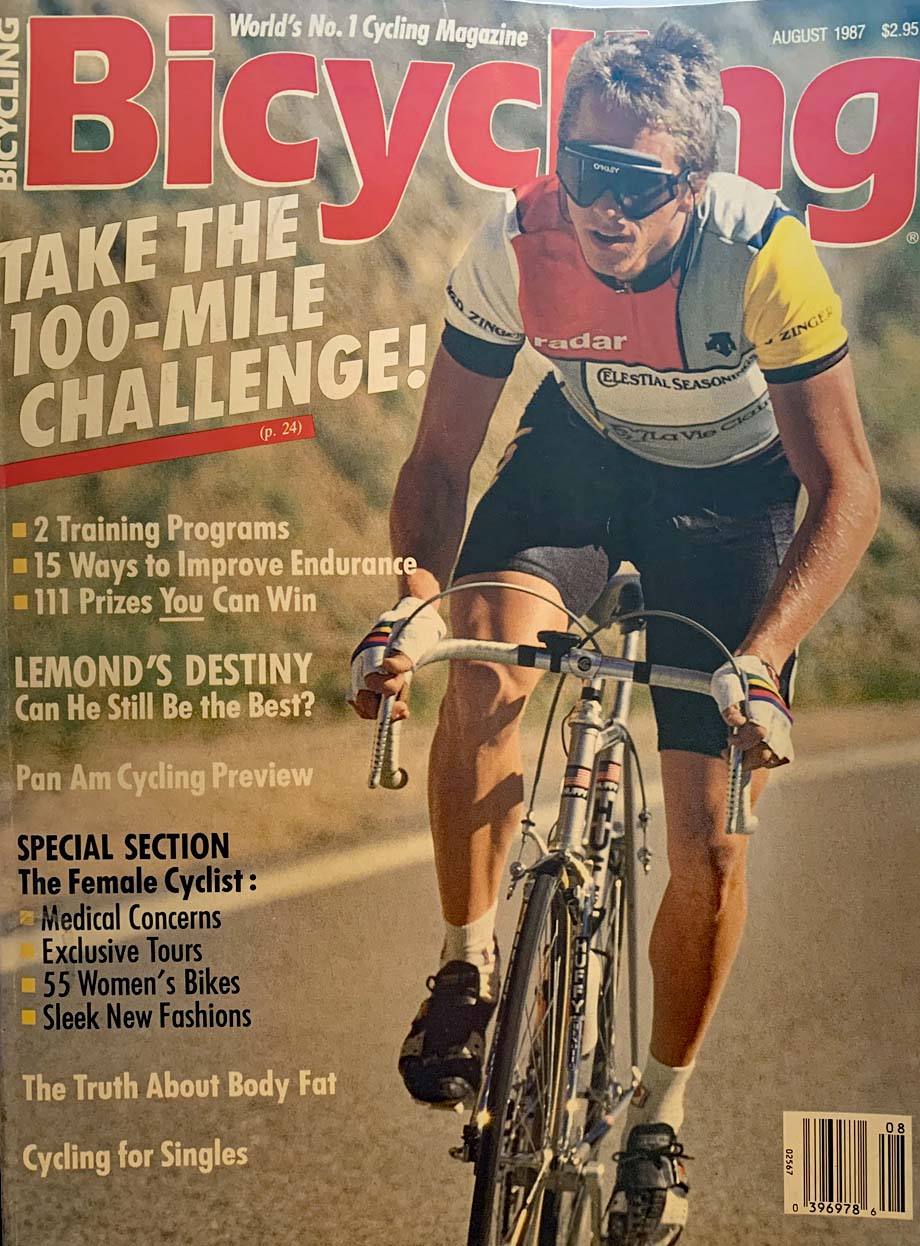 I used to subscribe to ‘Bicycling’ for a long time until I discovered ‘VeloNews’ in the Edinburgh Bike Co-op. There was a lot of ‘lifestyle’ stuff in it but what I liked was that they would do in-depth features on the latest US ‘funny bikes’ – which I loved. Chet Kyle’s creations for the ’84 Olympics and those GT monocoque machines just two of the cutting edge creations they looked at. The Lemond cover is actually atypical, usually it was a determined looking character with a luxurious moustache and huge Bell skid lid, ‘giving it some’ or a pretty lady smiling her way up a climb. Interestingly, the latest ‘Cycling Weekly’ covers owe a lot to those ‘Bicycling’ covers. As with ‘VeloNews’ I haven’t seen a copy in ages. 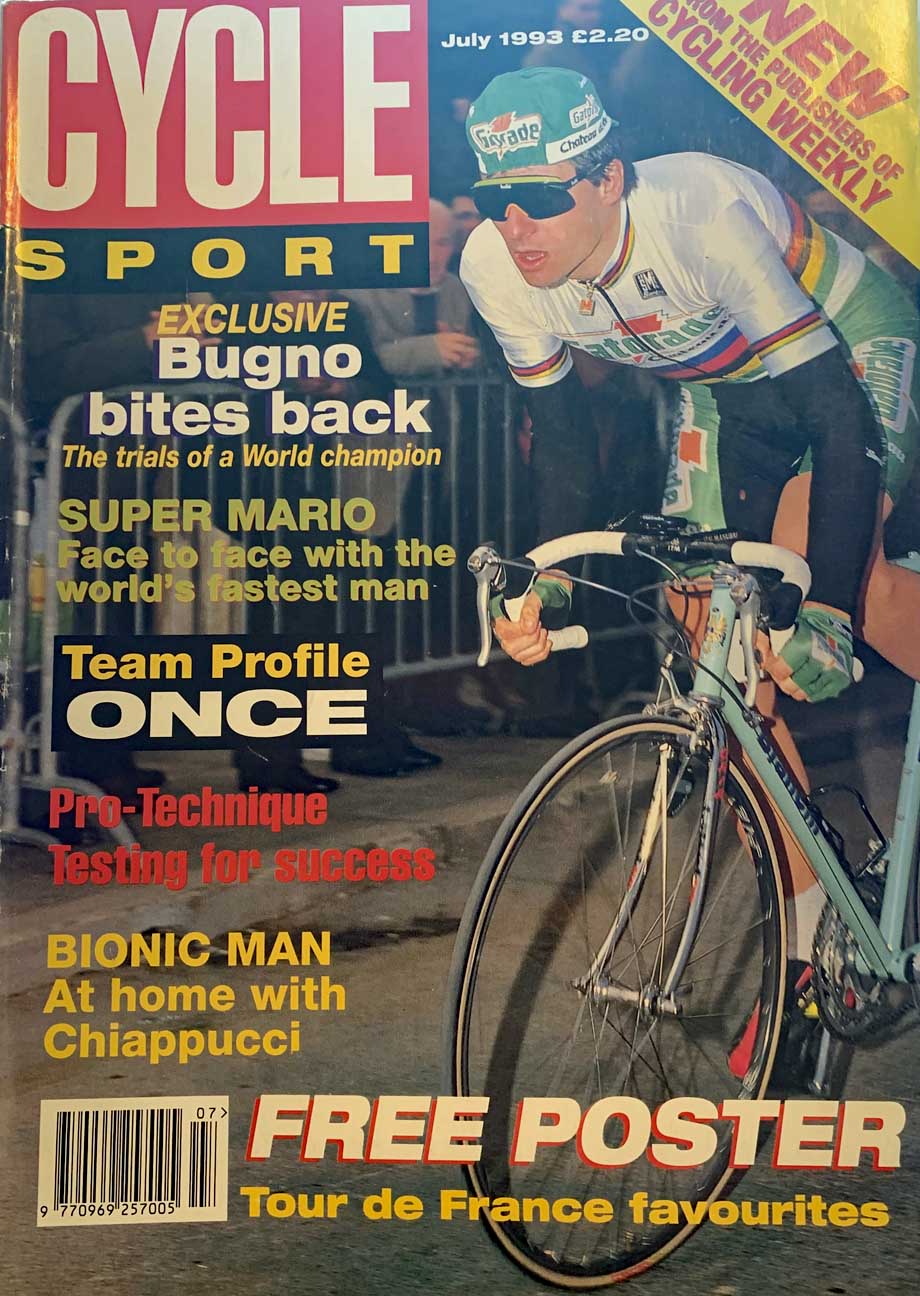 One that we lost recently in the UK was ‘Cycle Sport’, I missed issue one but have every edition from number two up until it folded in 2016. It was launched by the publishers of ‘Cycling Weekly’ as their ‘pure race’ features mag, with glossy paper and more space to devote to in-depth features for which there wasn’t room in the weekly magazine. Initially it was cool with aforementioned issue two containing big features on Gianni Bugno, Jacques Anquetil, Super Mario Cipollini and Toni Rominger plus a rather nice review by Allan Peiper of his WordPerfect Colnago. But by the time of its demise, the ‘edge’ was gone and no one missed it. 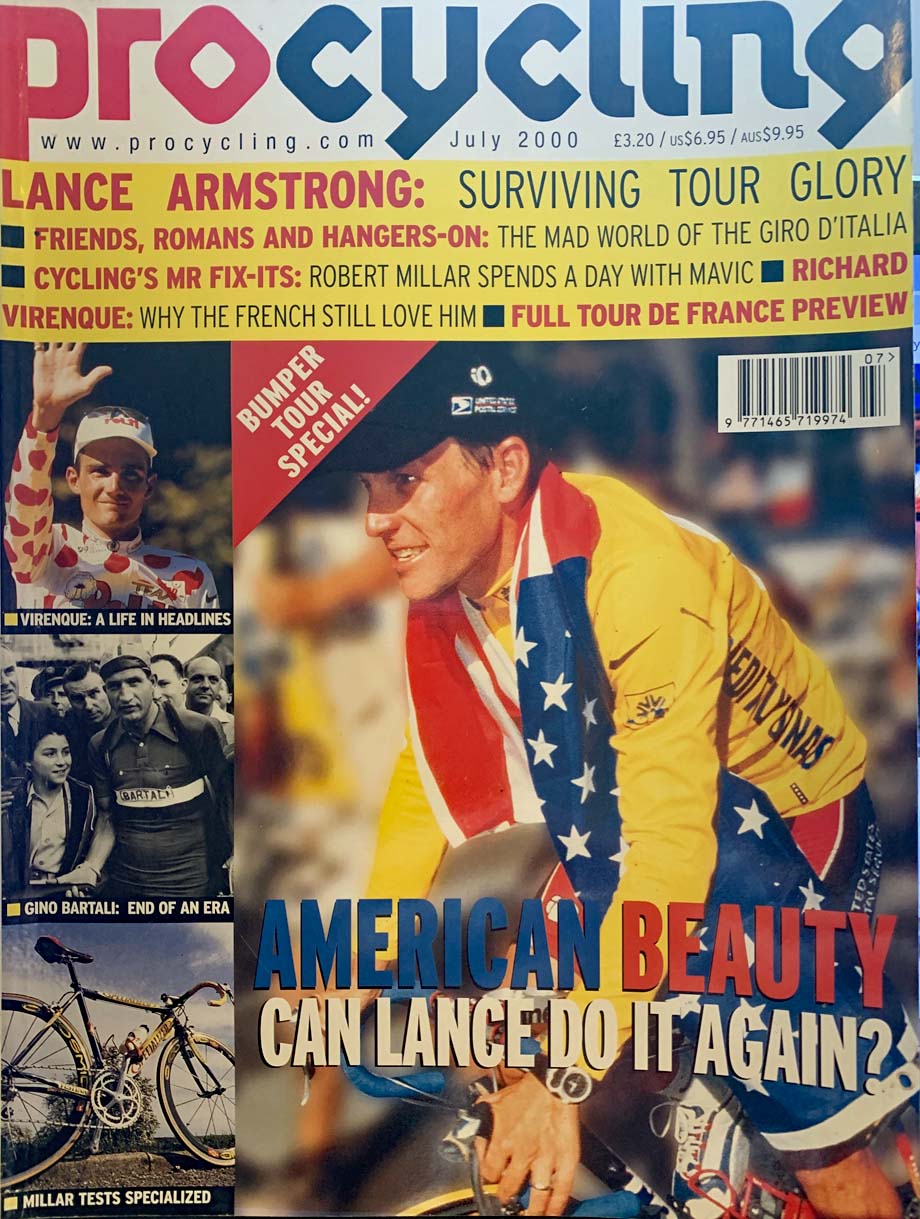 In a similar vein to ‘Cycle Sport’ but later to the party was ‘Pro Cycling’ magazine which still exists albeit has seen a massive re-brand with high production values, excellent photography and some nice ‘retro’ pieces. I still subscribe and whilst I have to confess to ‘skimming’ much of it there are nuggets in there that I enjoy. But the biggest problem for any magazine is that there’s so much content on the internet and it’s hard to be original. 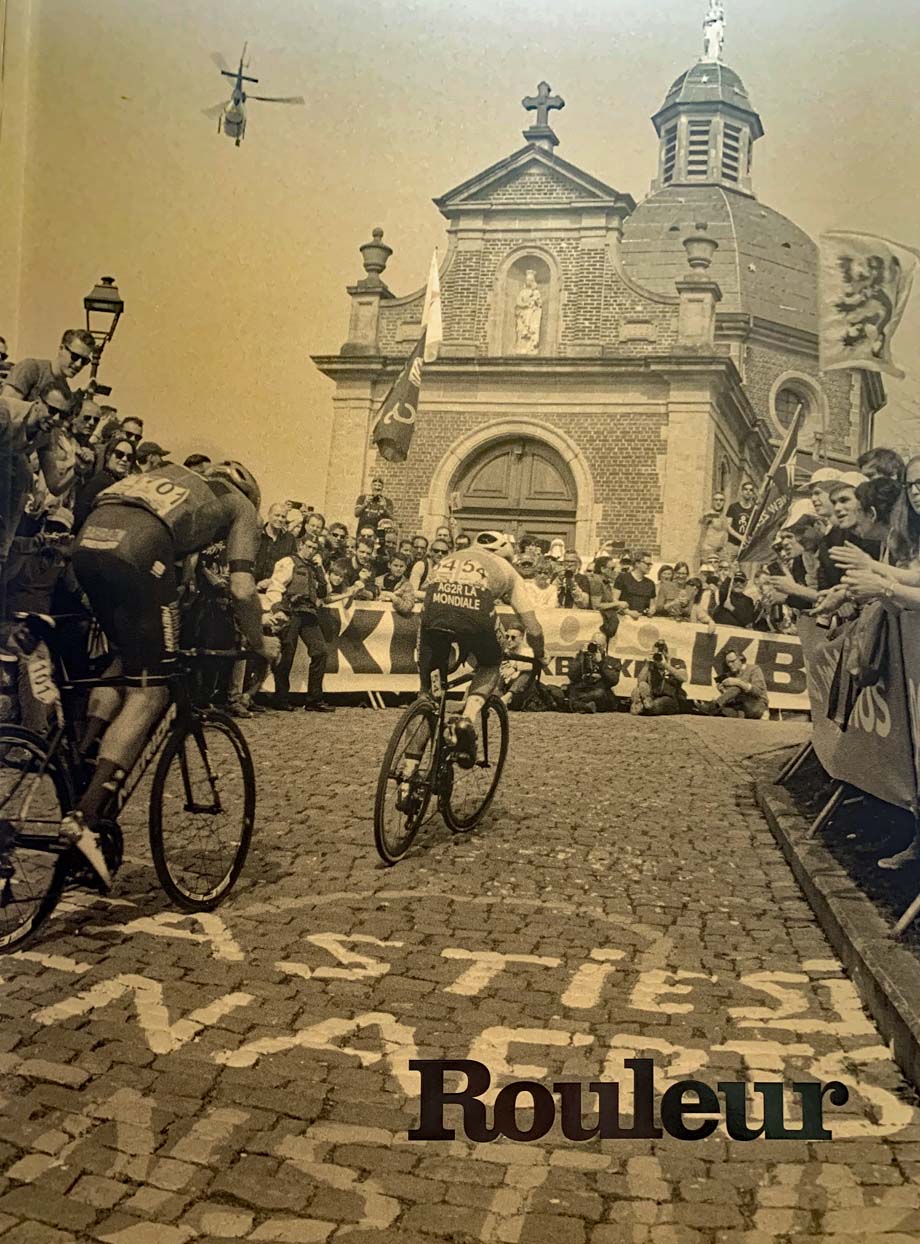 On the subject of production values, the daddy has to be ‘Rouleur’, from the wonderful smell of the high quality paper when you open the envelope containing each edition to the off-beat photography and often excellent interviews – the current ‘Belgian’ edition has a great interview with Patrick Lefevere for instance – it’s pure quality. There’s the odd columnist I can’t take too and some articles are too trendy for their own good but when that brown card envelope drops through my letter box it never fails to lift my spirits. And finally, my other current fave read. 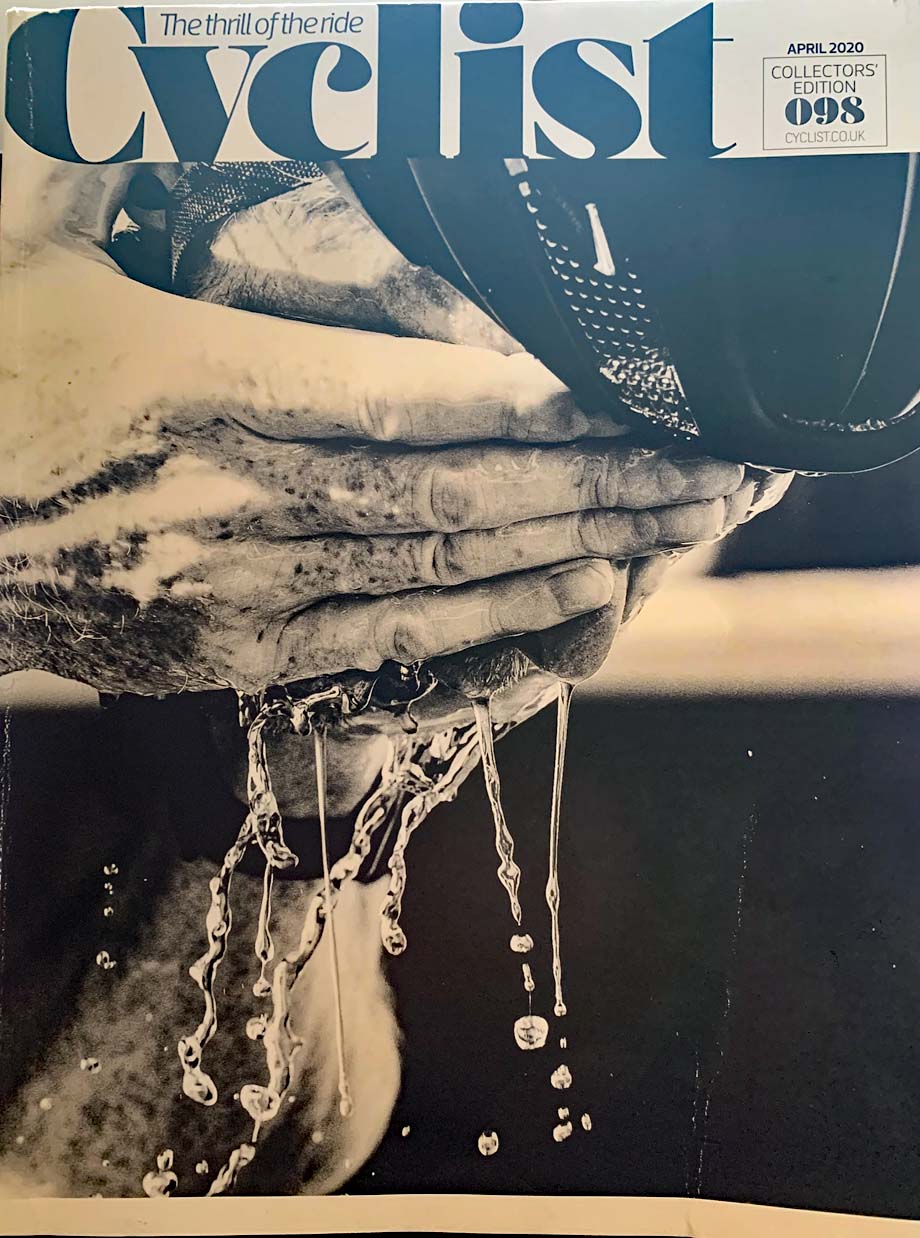 Cyclist – The thrill of the ride

Not ‘pure race’ and lots of equipment tests but good production values and in-depth features on component manufacturers, not to mention some good interviews.

There are other mags out there but they’re aimed at a different kind of reader; and of course there all the other ones which failed – maybe that’s fodder for another article?

But I’ll never replicate that feeling in the 70’s of walking into the newsagents on a Thursday morning, picking up my ‘Comic’ and discovering what had been happening over the last week in the sport I loved. 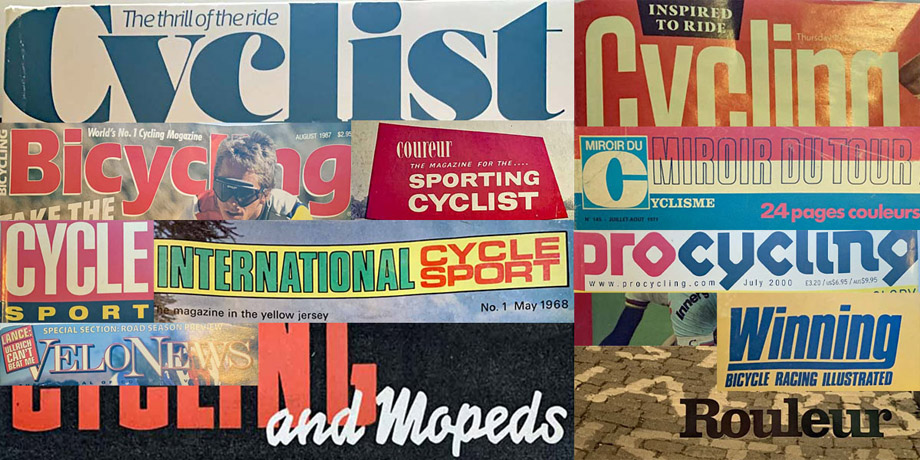