The days are getting shorter and the temperatures are starting to plummet. It must be time to release my yearly cycling calendar. Every year the selection process gets a little more difficult as I seem to be able to fill up my 32GB memory cards quite quickly these days.

Join me as I share my thoughts on how I narrowed thousands of images down to a 12 month calendar of my favorites. Here’s some “behind the scenes” information for this year’s calendar which is available here. 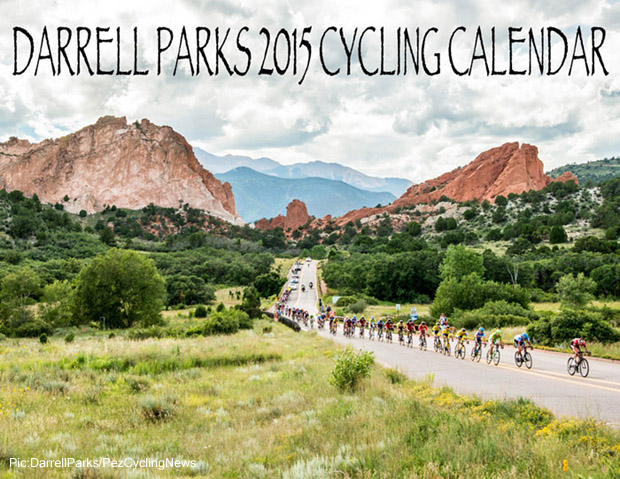 Choosing the cover image for the calendar can be a bit of a struggle. The shot of the peloton coming out of the iconic Garden of the Gods at the USA Pro Challenge was an easy first choice this year. I had envisioned this image ever since the USA Pro Challenge had announced this year’s race would be doing multiple laps among this majestic rock garden. I almost missed this opportunity completely though, as Jens Voigt went on a solo breakaway that kept me distracted from the peloton. Remembering a short cut from the prologue, held here in the inaugural Colorado race, I was able to capture this shot of Jens and sneak back in front of the peloton to grab the cover shot as they left the Garden for the final time. 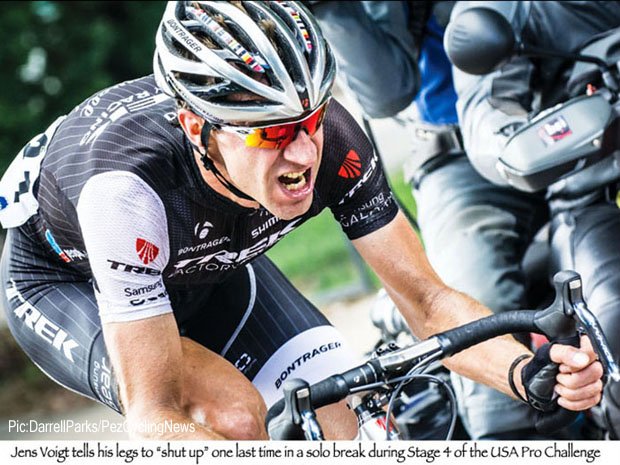 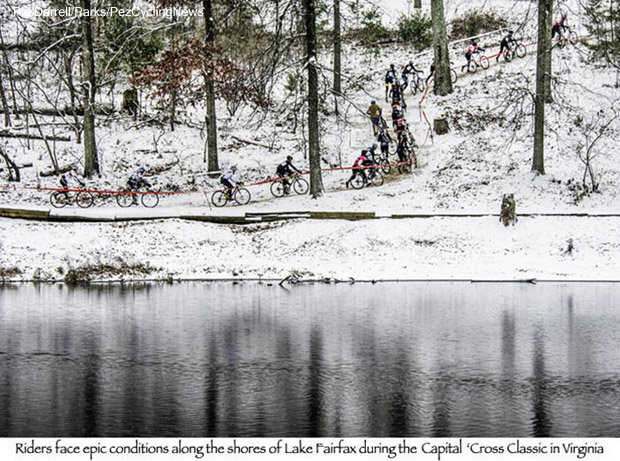 January features a shot from my favorite local cyclocross race here in Northern Virginia. The Capital ‘Cross Classic is held on a course that meanders around beautiful Lake Fairfax. The race’s December time slot can result in some epic weather conditions and last year’s edition was no exception. At times, the snow squalls were so strong that you could barely see 10 feet in front of you! I caught this image of riders going through the barriers during the blizzard-like conditions. Once the snow storm backed off a bit I made my way to the shoreline and shot across the lake, capturing the snow covered run up for the Calendar image. 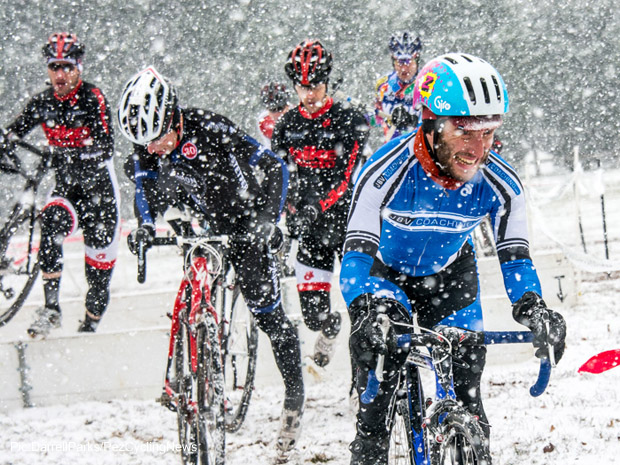 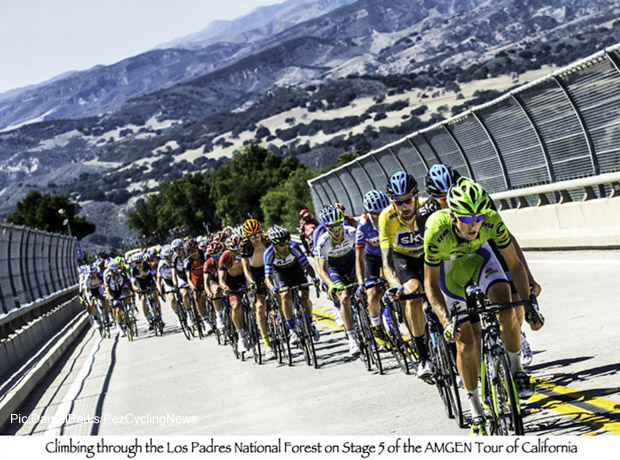 Stage 5 of the AMGEN Tour of California took the race from Pismo Beach to Santa Barbara. This route through the Los Padres National Forest brought back many fond memories of living in Santa Barbara in the ’80s. The mountains in the background were a short 45 minute drive from town, making it my go-to playground. Hiking, camping, and best of all, some of the best mountain biking in California, made for many memorable weekends in the Los Padres. The bridge that the riders are crossing runs over the old Stage Coach Road leading to Cold Springs Tavern. The Tavern was a great place to grab a beer and a buffalo burger or Tri-Tip sandwich after a ride. 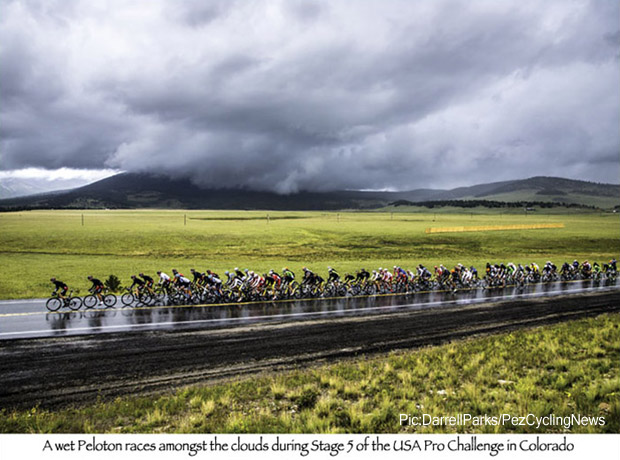 Stage 5 of the USA Pro Challenge was one of many wet races I had the fortune of shooting from the back of a motorbike this year. Inclement weather can make for some spectacular images, but you’ve got to make sure your equipment can handle it. You also need to make sure you dress the part, as a cold Colorado mountain rain can quickly ruin your day if you get soaked to the bone. Shooting from the bike in the rain gives a whole new meaning to the word “challenge”. 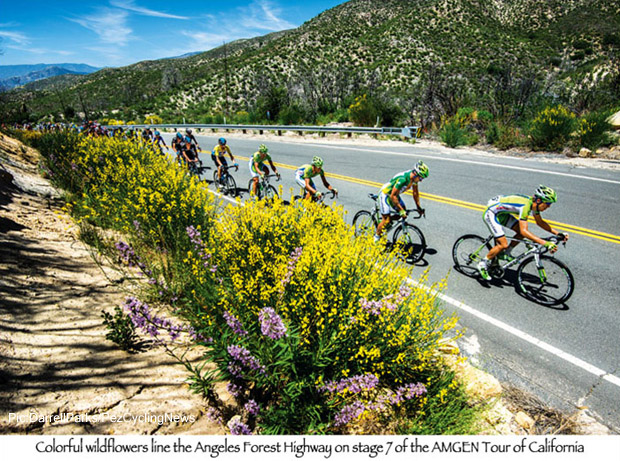 Stage 7 of the AMGEN tour of California followed the Angeles Forest Highway through the high desert terrain of the Angeles National Forest northeast of LA. You never know just how prolific the wildflowers will be from year to year but this stretch of road had all the ingredients for a spectacular showing. Throw in Team Cannondale leading the Peloton with Peter Sagan in the Green Sprinters Jersey, followed by Sir Bradley Wiggins in Yellow, and you have an easy pick for the month of May. 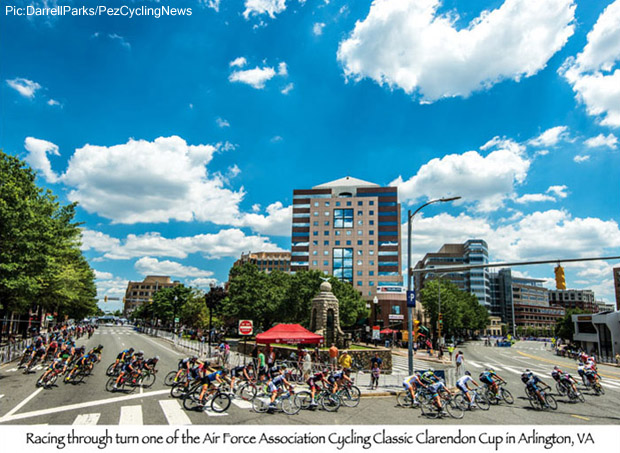 Our big local Northern Virginia road race is the two day Air Force Association Cycling Classic held in Arlington. Saturday’s Clarendon Cup Criterium is held on a fast, five turn, hourglass shaped circuit with the start/finish line directly across from the Clarendon Metro stop. This race typically has a fairly large field and I wanted to try and capture the size of the peloton strung out in full on race mode. Fortunately, everything came together this year as the TV camera was set up on a scaffold on the outside of turn one. A quick chat with the camera man and I was up on the scaffold with a sweeping view of the course and a beautiful, cloud filled, blue sky background. I used my fish eye lens to capture the race, stretching from the start/finish line, through turn one, all the way into the start of turn two. 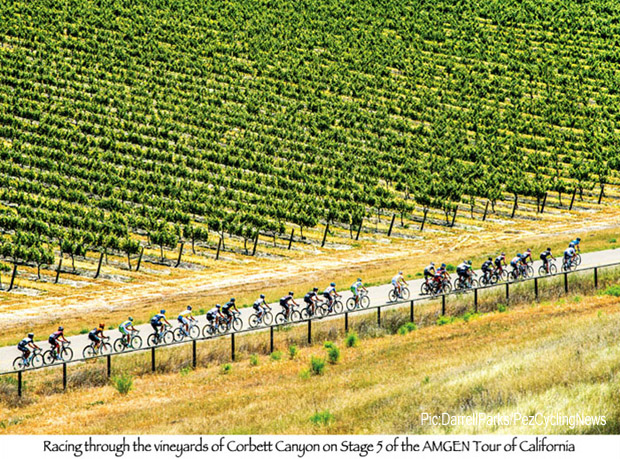 Stage 5 of the AMGEN Tour of California took the riders through the vineyards of Corbett Canyon. I’ve had this shot of the riders passing in front of a hillside full of grape vines in my head for many years now. When I came around the turn and saw this scene, I knew it could be the shot I had been longing for. Of course I would first need to get off the motorcycle and run 100 yards up the hillside opposite the scene with all my heavy camera gear. Then try to control my heavy breathing and compose the shot before the peloton, just seconds down the road, came into the scene. When I got to the top of the hillside I had a new dilemma, just as the first riders came into the scene. I now had a view of the hills behind the vineyard that I could not see from the road. I quickly took my calendar shot of just the race and the vines that had been on my bucket list. I then grabbed my wide angle and captured the new and equally spectacular scene that had unfolded before me. 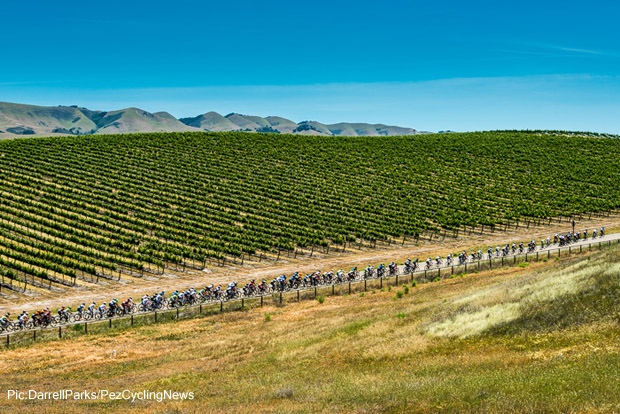 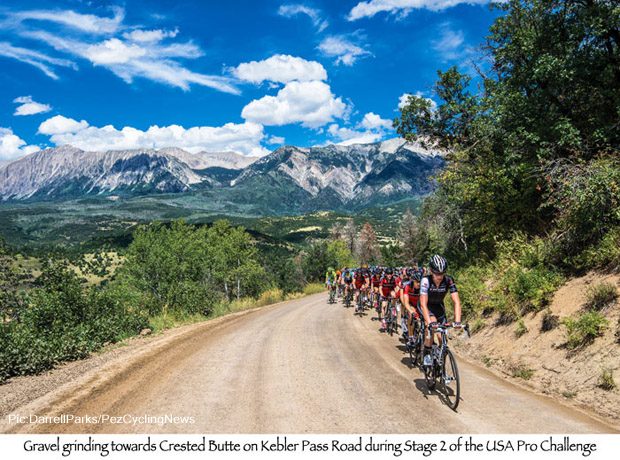 Gravel grinding road rides seem to be all the rage this year. More and more races are beginning to include stages with dirt and gravel roads. Stage 2 of this year’s USA Pro Challenge took the riders on multiple sections of dirt, some of it super slick as rain made the trip down the mountain a slippery mudfest! The summer weather can change quickly in the high mountains of Colorado. It’s hard to believe this blue sky image was taken only 30 minutes before the rain set in. Though it looks like I was standing in the middle of the road when I took this shot, it was actually taken from the motorcycle. I saw so many opportunities to stop and take scenic shots on this stage, but once stopped, it’s almost impossible to get back around the peloton on these narrow dirt roads. This turn was the perfect spot to have my moto driver stop ahead of the peloton and wait. As soon as they came into view, I had him slowly pull out into the road so I could get the shot and not get stuck behind them. 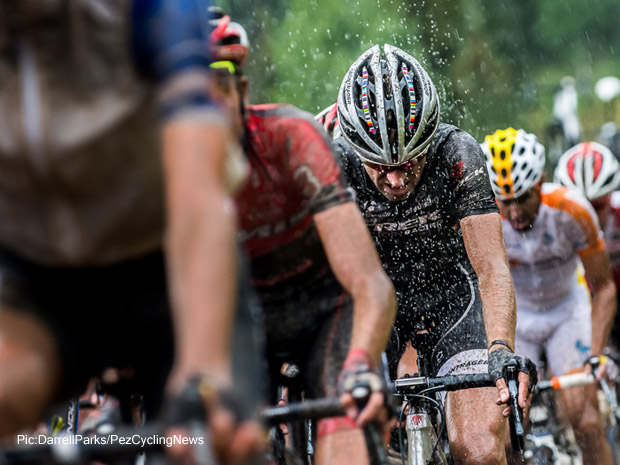 This shot is also from Stage 2 of the USA Pro Challenge and is featured on the back cover of this year’s calendar. This is the rain I spoke of earlier and yes, I do have 2 shots of Jens Voigt in this year’s edition! Jens has always been one of my favorite cyclists and since this was his last stage race, in his retirement year, I thought it was appropriate. Jens is known for his ability to suffer more than most, as he seems to enjoy going off the front alone, just him against the wind and the mountains. I thought this image of Jens with his head down, suffering in the cold rain, embodied all that is Jens Voigt. This just may be my favorite image from the 2014 racing season. 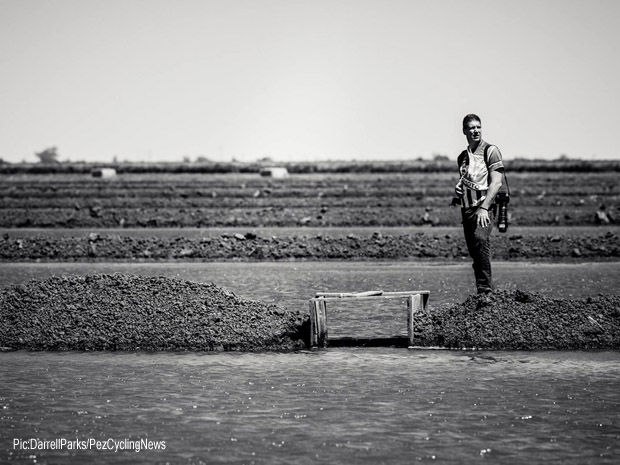 Be sure to visit DarrellParks.com to order your Darrell Parks 2015 Cycling Calendar today.