I’ve just published my 2016 cycling calendar featuring a selection of my images taken during the 2015 North American pro road racing season. Join me for a “behind the scenes” look at the details of some of the images in this years calendar which is available here DarrellParks.com. 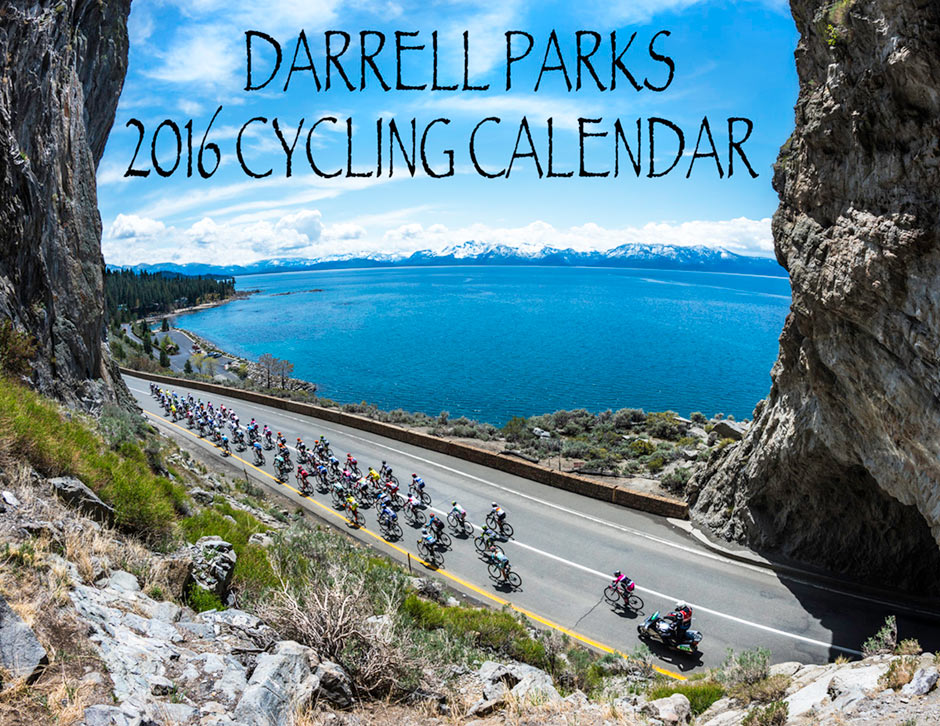 This year the Amgen Tour of California decided to give Lake Tahoe another chance to host a stage with the start of the women’s race. Last time they tried this the stage was cancelled due to an abundance of snow on the course. Surely that was just a fluke and couldn’t happen again, right? Let’s just say that I wouldn’t have made it to the start in Tahoe this year without putting tire chains on my rental car. Fortunately the weather broke and the only snow left on race day was gracing the mountainous backdrop of Lake Tahoe. The cover shot was actually taken on the eastern side of the lake in the state of Nevada. The framing of the rock walls and the empty space in the sky was just begging me to use this shot for this year’s cover. 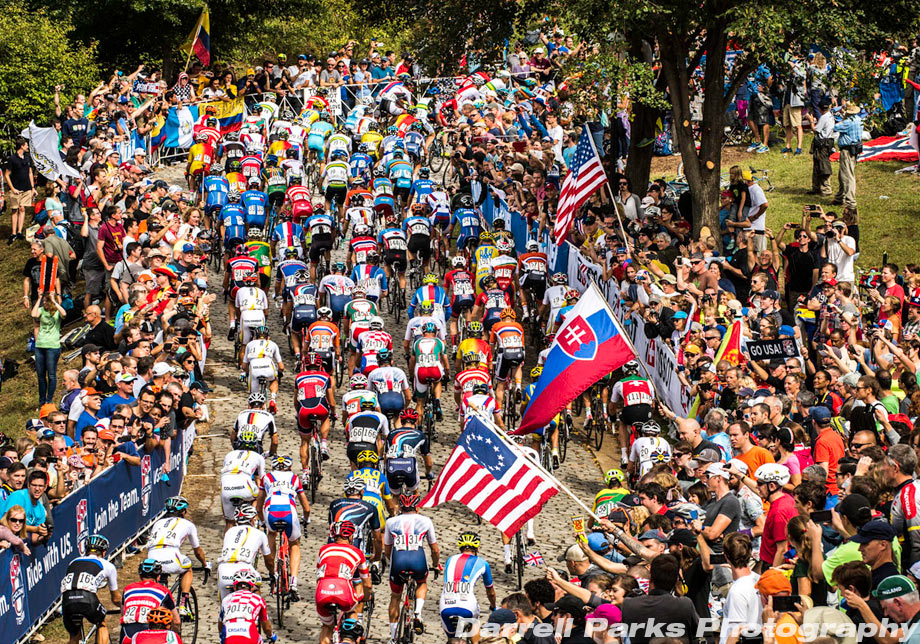 Having the Road Cycling World Championships in Richmond this year was nothing short of phenomenal, and being a short 90 minute drive from my home just outside Washington, DC was just the icing on the cake. I could have put together a complete calendar just from the images I captured during my week at World’s. This image on Libby Hill turned out to be my favorite as it reminds me of pictures from the classic races of Europe. It has the perfect ingredients of a tight peloton on a steep cobbled climb, huge waving flags, and a deep line of fans jammed against the barriers on both sides of the road. 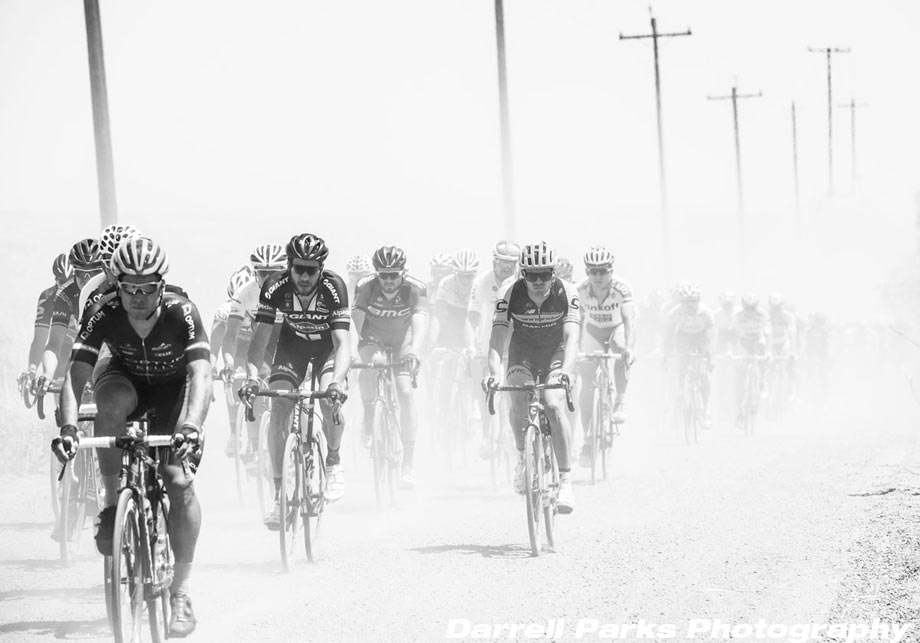 The AMGEN Tour of California joined the crusade this year and incorporated a few sections of stone covered roads halfway through Stage 1. Not being on a moto for this stage, I had to park my car back on the pavement and run about a mile down the dirt road to get to this spot ahead of the race. The lead cars and motos of the race caravan were stirring up quite a dust storm. I waited patiently for the race while covering my cameras as best I could, trying in vain to protect them from the micro fine powder floating in the air. The peloton appeared through the haze with the stronger riders taking a position at the front, ahead of the enormous dust cloud they were leaving behind for the rest to breathe. This shot was taken after about two thirds of the riders had passed. They continued, one by one, to magically appear out of the thick, white, cloud. 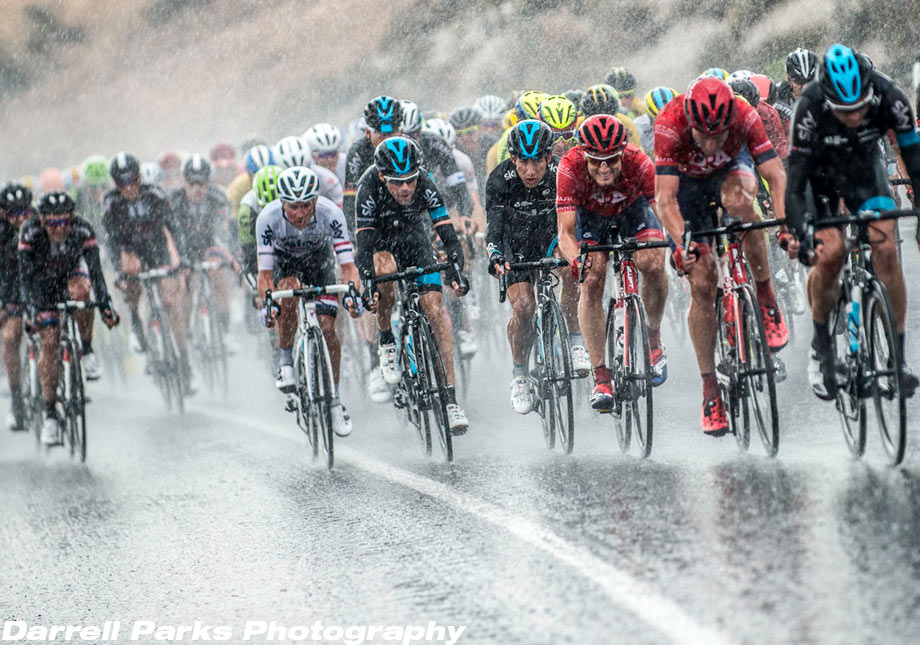 Stage 5 of the AMGEN Tour of California was quite the opposite of the dust bowl encountered during Stage 1. I happened to be on a motorcycle for this stage and it was far from the most pleasant ride I’ve ever had at the races. It was raining so hard during the last 10 kilometers of the race that it was nearly impossible to see let alone shoot from the bike. We rode well ahead of the race and stopped under a large tree by the side of the road. I tried to use the tree’s canopy as shelter to wipe the water from my lens. With the peloton back in sight, we took off down the road just in front of them. I turned around and looked through the camera viewfinder as I pointed it toward the mass of riders bearing down on us. I could barely see the riders as I held down the shutter release, letting the camera do its job and hoping the autofocus was working through the thick, wet, darkness between us. 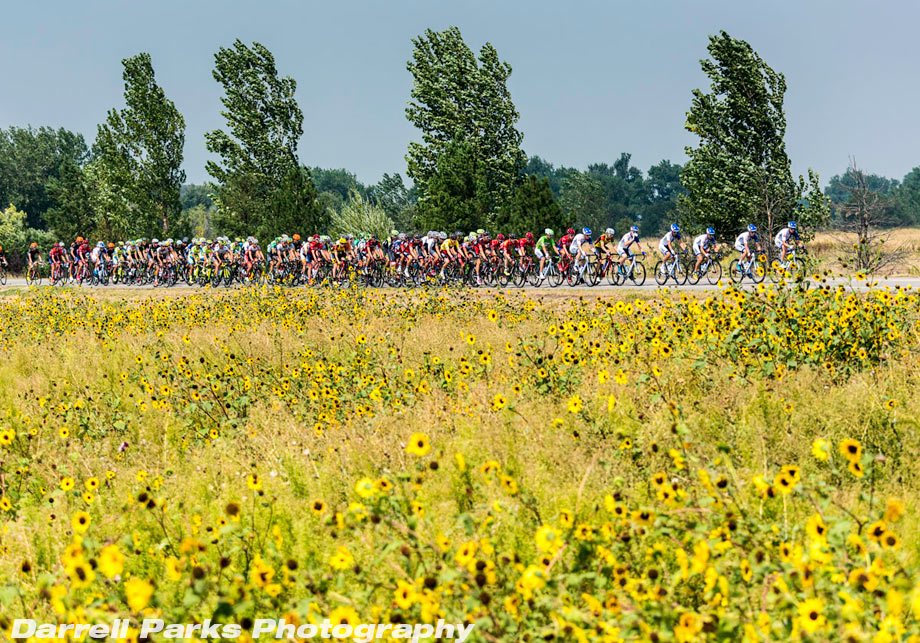 The month of May features the state of Colorado and Stage 5 of the USA Pro Challenge.

I was driving the course ahead of the race when I came upon this field of tall yellow wildflowers. I immediately had the shot I wanted in my head and set out to make it happen. I planned to shoot across the field of flowers with the peloton in the background. I found a dirt path and ventured out into the thick crop of green leaves and yellow pedals. Unfortunately the flowers were over 6 feet tall and I could no longer see the road to shoot the riders. I raced back to the car and slowly maneuvered it down the dirt path and into the field. I now had a platform tall enough to see over the flowers. Yes, standing on the rental car is a common way to get some often needed elevation. Of course I had some difficulty steadying myself as, you can see from the trees, the wind was quite fierce. I was also getting some strange looks from within the peloton as I’m sure it appeared as if I was rising up out of the middle of the flower field since the car was hidden from their view by the flowers. 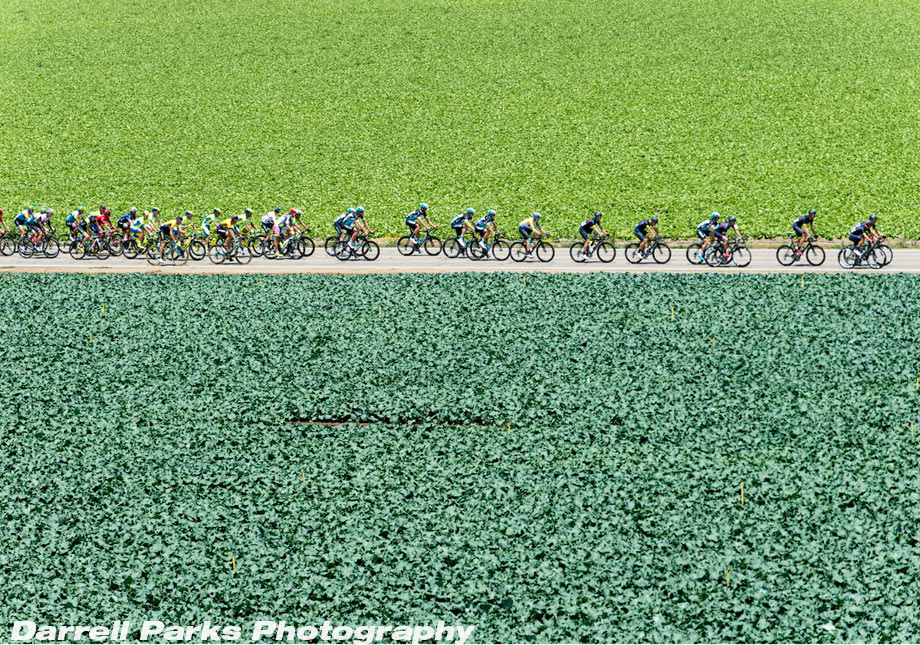 The month of September takes us back to California and Stage 4 of the AMGEN Tour of California.

This stage traveled through the agricultural fields of northern Santa Barbara County. I was beginning to get disappointed in the scenery as the landscape was filled with row after row of unattractive greenhouses. I asked my moto driver to speed ahead of the race to see if we could find something even remotely attractive. We came to this long, straight road with these lush green fields on either side of it. Looking to the right, about 100 yards across the field, I spotted a tractor driving along a low ridge. That’s where we needed to be. As we came to the end of the field, we saw the remains of what was, perhaps a long time ago, a road leading to the ridge. My moto driver was up for some off road adventure and away we went. When we got to the ridge I threw the 400mm telephoto lens on just in time to catch the race rolling along between the fields. The elevated vantage point, combined with the compression of the super telephoto lens, almost makes the fields seem like vertical walls of vegetation. 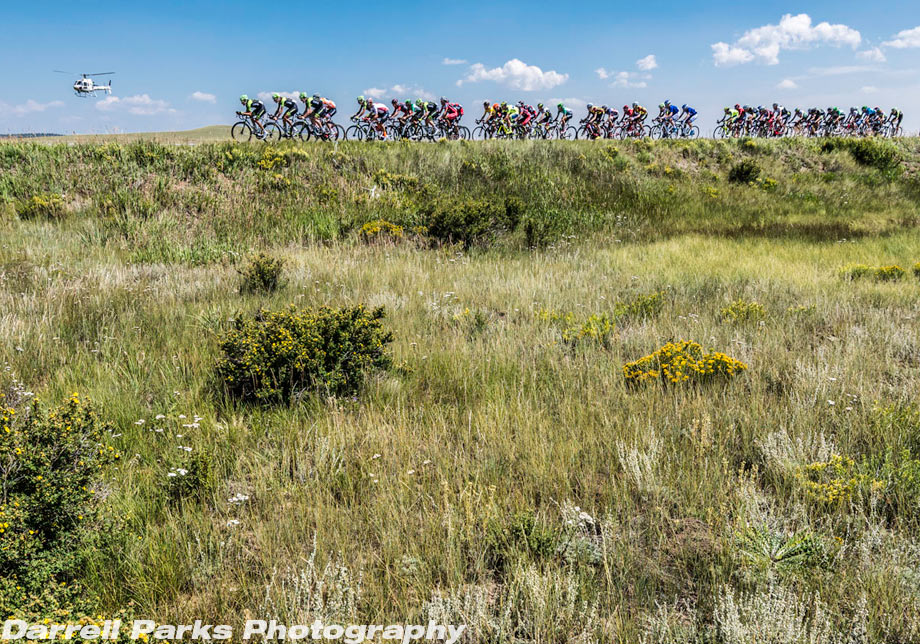 Stage 4 of the USA Pro Challenge turned out to be a windy affair with plenty of long, straight, exposed roads. I found this low lying vantage point and set up shop. Little did I know that the race helicopter would be leading the peloton when they came through. The race chopper can turn a good cycling image into a great cycling image. Sometimes you can shoot an entire stage race and never see the helicopter in your shot. This year’s USA Pro Challenge was just the opposite for me. I think the pilot was trying to get his picture taken on every stage. 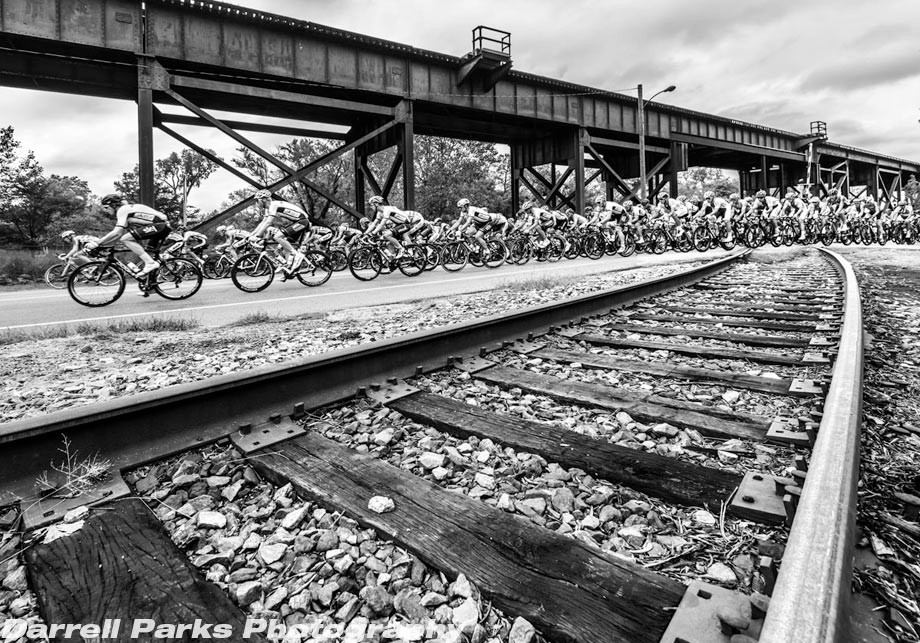 The month of November takes us back to Richmond, Virginia and the Road Cycling World Championships. Richmond is known for its multitude of trains and train tracks. The Shockoe Bottom area is also known for the elevated section that runs along the James River. For this shot I’ve used a super wide angle lens to get maximum depth of field in the image. Shooting low, and right next to the tracks, allows me to use the tracks to guide the viewer’s eye towards the riders and right into the photo. 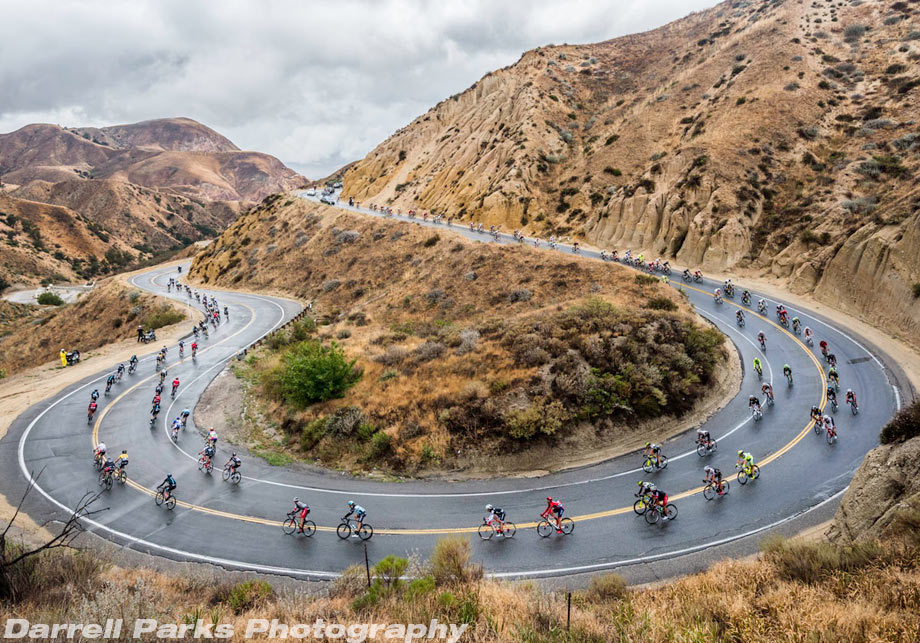 I chose that rainy stage 5 of the AMGEN Tour of California for my December shot. This image shows the entire peloton navigating the huge, wet, sweeping turns of Grimes Canyon Road just outside of Fillmore, California. The slippery road conditions caused the riders to slow down and give each other some space. If the road had been dry and they were racing it at speed, chances are they would not be spread out and filling up the entire road as seen in this image. Sometimes it all just works out. This image was also featured in the Exposure section of the September 2015 issue of Outside magazine. 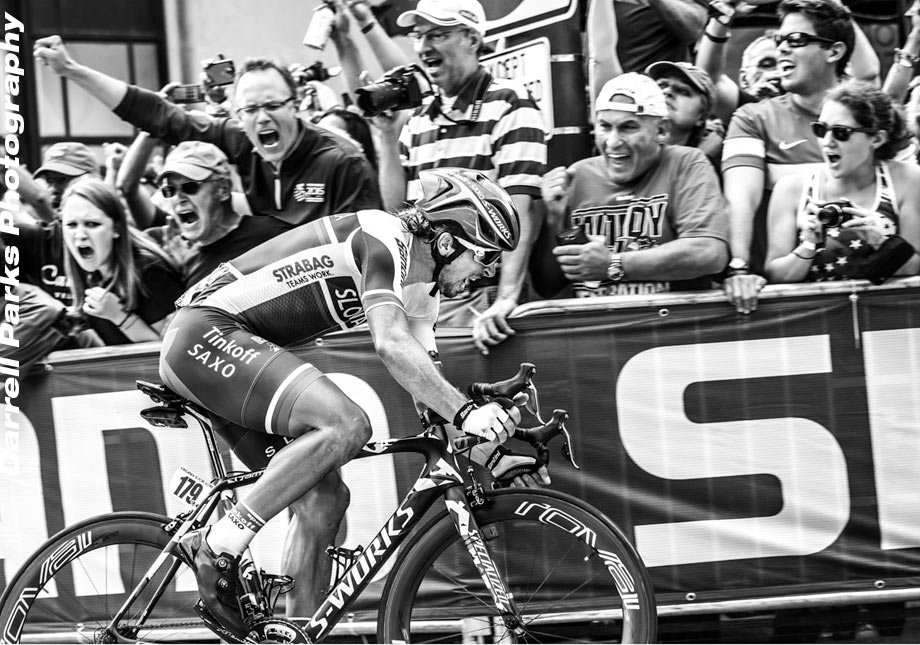 I usually like to showcase scenic images on the calendar month pages. I do however include a couple of bonus images each year as well. One of this year’s bonus images just so happens to be one of my favorite images of one of my favorite riders in the modern peloton. Here I’ve captured Peter Sagan rounding the final turn on his way to victory in the Men’s Road Race World Championships. But Peter Sagan is not the only star in this image. The outrageous emotions of the fans is what really makes this image pop. How exciting is bike racing in the United States of America? One look at this picture is all you need for an answer that question.

PEZ Bookshelf: We Roll From a Land Down Under

Dollars are Flooding Into Sports – Why Isn’t Cycling Getting Any of Them?

PEZ Goes to the Movies: Preparing for the Race Across America