Like all the best things Italian, the la Primavera is beautiful, lasts a long time and leaves you wanting more. The Women’s World Cup Round 2 also runs Saturday, 118 km from Varese on the Mediterranean coast west to Via Roma in Sanremo. We checked in with T-Mobile’s Dede Demet-Barry about the team’s prep for Saturday.

The inaugural race was held in 1907 and has run 94 times, missing only 3 starts due to world wars and even surviving the occasional landslide. La Primavera has duly earned its place as a classic, and what better way to kick off the World Cup season than a 294km jaunt along the Italian Riviera under azure skies? Throw in a couple of small hills masquerading as climbs in the final kilometres and you’ve got yourself a bike race.

With the arrivo of spring in northern Italy comes cycling’s granda festa, Milan – San Remo. The course itself is run over mostly flat roads, often with a prevailing headwind-crosswind. With 20 kilometers of racing to go, the small cols of la Cipressa followed by the Poggio provide an opportunity for power climbers to attack. With only a couple hundred metres of elevation gain the race is seldom won here. However it can be lost for those unable to follow the attacks that inevitably occur on these short twisting climbs. Although six of the last ten races were won by sprinters, among them only Mario Cipollini could not be counted as one with climbing power. So picking favorites is as much about power as it is about speed. 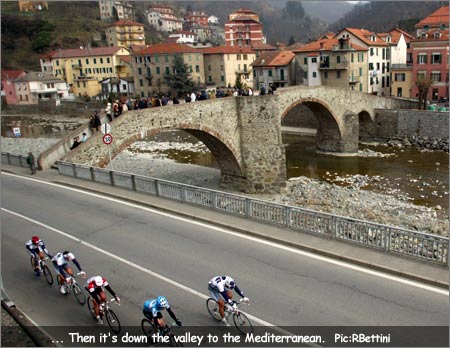 Place Your Bets!
With Italian riders having laid claim to 47 victories over the history of Milan – San Remo, winning this race is big macho for any Italian. So big in fact that the great Cipollini once lamented that la Primavera was the one victory missing from his bling… Cipo finally won in 2002 and Paolo Bettini began his run of World Cup victories here in 2003.

With World Cup points on the line there should be no shortage of protagonists barreling down the finishing straight of the Via Roma in San Remo. Max van Heeswijk is hot off Wednesday’s win in Belgium, and previous four-time winner Eric Zabel was in every sprint at Tirreno-Adriatico. If you’re looking for a long shot, think Vinokourov or Vandenbroucke.

I predict an Italian champion with the winner dedicating the race to Marco Pantani. Cipollini, reunited with long time lead-out man Gianni Fagnini, would love to mark a victory for il Pirata. Italian champion Paolo Bettini, already on fire with two stage wins and the GC in the Tirreno-Adriatico, will be defending his country’s honor along with his 2003 Milan San Remo and World Cup titles. But personally I like Petacchi, the seemingly unstoppable speedster who just notched his fifth victory of the season after taking three stages in the Tirenno-Adriatico. 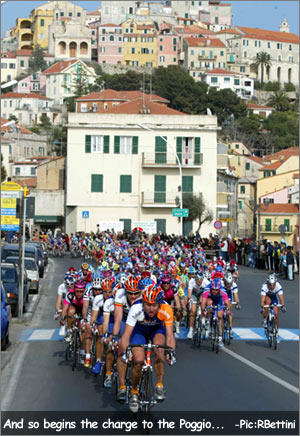 No matter who is first over the line, we all win on March 20 as la Primavera kicks off spring and the official return of another season of corsa ciclista.

And In This Corner – The Ladies WORLD CUP #2! – La PRIMAVERA ROSA
As if 6.5 hours of men’s World Cup racing isn’t enough excitement for one day, fans will be treated to a double-header as the pro women cover the final 120 km’s of the course. With the Geelong WC1 in the history books, riders for WC2 – la Primavera Rosa – will be turning on the steam like a red hot Saeco “macchina per espresso”.

We dialed in Dede Barry of T-Mobile to talk about the teams preparations and what we can expect when the pro ladies line up for the start (and the finish) on March 20.

WC1 ended in a sprint finish. The Aussie girls had the extra zap in the sprint that only comes from racing. What have you been up to since WC 1 to get that little extra edge into your form?

DEDE: After Australia, I took it easy for a few days and then began preparing for Italy. I did a block of long rides and then started doing some interval training. Michael (ed; husband Michael Barry of USPS) came home to Girona after completing the Vuelta a Murcia last week so I am riding with him quite a bit. It’s like motor-pacing… he’s like a rocket at the moment.

Who from T-Mobile will be lining up in Italy for WC2?

DEDE: T-Mobile will have five, rather than six riders racing at the Primavera World Cup, as it conflicts with Redlands – a very big priority race for our team. Kimberly Bruckner is coming from Boulder, Colorado. It will be Dotsie Cowden’s first international race this season, as she has had a slow start due to a collarbone break in January. Stacey Peters was strong in Australia and I think she will be even stronger in la Primavera. Amber Neben (ed: reigning USA road champion) will be with us as well.

T-Mobile didn’t race the Primavera course last year – has the team done a reconnaissance of the route?

DEDE: We’ll meet up in Varesse on Wednesday and ride over the Primavera course together. I am looking forward to seeing the course and getting a feel for the Cipressa, the Poggio and the final kilometers of the course.

RADIO THIS
Last year the great Russian rider Zulie Zabirova lit up the women’s race with an attack on the Cipressa, en route to a solo victory in San Remo. Will T-Mobile try to initiate something before the Poggio or take its chances in a sprint?

DEDE: We will try to initiate something before the finish.

An attack like Zabirova made in 2003 is epic and rare – particularly on this course. It’s a thing of beauty – dramatic, with elements of courage. Unfortunately there are few riders in today’s pro peloton willing to accept such risks. When would you choose to launch a solo attack? Would it be pre-planned, radioed from the DS or simply intuition on the day?

DEDE: I like to ride off of intuition on the day. I will feel the flow of the race and take opportunities when they arise.

Given the UCI’s recent proposal to ban radios, that’s an insightful and refreshing perspective. With the Primavera often ending in a bunch sprint how is the T-Mobile sprint train progressing? Is this something the team practices and what is the general game plan the team uses to set up the train?

DEDE: We do plan a lead-out train when we have a sprinter who can win or be on the podium.

Does T-Mobile have a designated sprinter for the Primavera?

DEDE: No, we will wait to see who is there in the final and who has the best legs.

PRIMA PREDICTIONS
Nicole Cooke has said she won’t be defending her World Cup title as she is targeting the Olympics and World Championships. Where does the Primavera Rosa rank amongst your priorities?

DEDE: Primavera is huge opportunity for me, I have been looking forward to this race all winter, as it is a classic race, I think the crowds will be incredible and I have never competed in it before. I would love to put in a solid ride.

Of the top 15 women in the world on UCI points only three were in Geelong. With all the big guns likely to ride the Primavera Rosa, how much harder do you expect the racing to be?

DEDE: I think Primavera will be a much more difficult race than Geelong, as the course is more selective, the competition will have more depth and more riders will be in better condition now and more motivated.

Who are the riders to watch?

DEDE: Of the riders who have points from Australia, I think that Oenoe Wood will be a contender, as will Petra Rossner if it is not too fast on the climbs.

And since you will be in Italy where style reigns supreme and scooters scream, Donatella or Dolce?

Fave scooter? Get more info on the T-Mobile Women’s Team at their website: www.USACycling.org/Tmobile