It’s likely the most talked about topic on last weekend’s group rides was Jan’s retirement. And true to form, PEZ Readers spoke up after our own tribute to Jan last week, the letters came flooding in – here’s what you had to say…

• As it turns out, I unknowingly saw Jan Ullrich’s final Tour de France in 2005. I too thought he had one more victory in him as he stood on the podium on the Champs Elyseйs. It saddens me to think we will never see him compete again. Unfortunately, heresay and innuendo has put and end to his career. I must say, I do not blame him for climbing off his bicycle. So now, I say THANK YOU Jan! You always put a smile on my face and gave me someone to cheer for, even in the off season.
– BIG Chris

I decided to write a public letter, as I wanted to thank you for all you did for German cycling, for cycling in general and a project that I organized two years ago of which almost nobody knows about. By doing that in a public letter I want to remind all of our readers that Jan Ullrich is not a criminal, you are a human being with his heart in the right place.

In 2004 I organized a cycling project for kids of a children’s home in Ennepetal, Germany. After I visited the start of the 2004 Tour de France in Liиge with these kids they told me they would love to do something like this again. I said ok, but next year we will visit the Tour de France by bike, not by car. The kids were enthousiastic but did not know what I exactly meant…

In 2005 I went to the Cebit exhibition in Hannover. You were there for a T-Mobile presentation and I came with 8 kids of the children’s home. I explained the project I was doing in a few words and you reacted very positively. Without hesitation you signed loads of pictures and (yellow) jerseys for our project, which we sold at Internet auctions.

In April 2005 we organized a cycling day at the children’s home with races for kids and the auctions came to an end. Two weeks later we bought the bikes. The former professional rider Klaus-Peter Thaler prepared the bikes together with the kids, who where really proud. Some of them never had a bike before, and now they had a racing bike. I prepared a training schedule and trained for 3 months with the kids and than we started our own Tour. We road in several stages by bike from Ennepetal to Paris where we watched the final stage of the 2005 Tour de France.

Thank you for all those beautiful years, for all the great moments, for great cycling and for what you did for those (and other) kids.
– Renй Schuijlenburg
www.cyclingheroes.info
www.peloton.tv
E-mail: [email protected]

It truly saddened me to hear of Jan’s retirement. I can’t say I was a huge Jan fan, but I always admired him, and the way he carried himself. I completely agree with the comments about Jan being real gentlemen of the sport. In all of his defeats at the Tour, you never heard him make any excuses or blame his team, or accuse others of cheating. I have always wondered what would have happened if Jan had ended up at CSC after his first exit at T-Mobile/Telecom. I think Jan under a director like Bjarne would have brought out the best in him, and brought out his true potential.
– Jay Westfall Jan was a rider who made Lance Armstrong a better rider year after year, the one rider that Lance consistently respected and sometimes even feared a little. Ben Franklin reportedly said, ‘The prospect of hanging tends to sharpen the senses.’ It’s easy to fall into the trap of judging his motivation or his will to win, but we do so as outsiders who lack the insight of what it really takes, which was summed up by George Hincapie – thousands of things going right to lead to just one tour win. Jan had a way of making others focus on how to sharpen their own senses. Paradoxically, that ability didn’t help Jan as much as he probably deserved it to… on the other hand, our judgment is often skewed toward singular achievements rather than a body of work. Anyone should be so lucky as to retire with the kind of accomplishments that Jan Ullrich earned. His retirement marks the end of a truly remarkable era in cycling, one with incredible highs and lows, but undoubtedly a watershed time in our beloved sport’s history. We were lucky to watch it all happen.
– Don Gabrielson 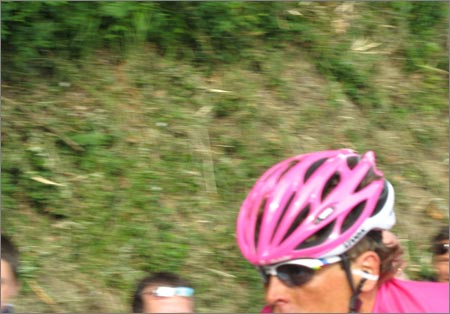 Jan was one of my favorite riders in the pro peloton. I had the chance to see
part of stage 7 of last years Giro. We were stationed near the end of the
stage, on a short but steep climb. The way that Jan made turning the
pedals look so effortless was amazing and something I’ll try to emulate but
never even come close. All I could do when I saw Der Kaiser was try and
snap a really great photo, but this is what I got…
Thanks for the memories.
– Dave Jefferies If I could make a wish come true
It would be to see a Grand Champion-yes you.
You gave your all, at every turn,
And even delivered, Le Maillot Jeune.
With tears in our heart, small smiles on our face,
We hand you over now, to conquer Life’s new race.
And in the meantime, hope and pray,
A statue of you cycling, may come for us, someday.
So Bravo! Herr Jan Ullrich, for all the gifts you gave,
There never was a rider, more courageous nor more brave.
Take with you these good wishes, respect and all our Thanks –
Go sprinkle all your magic dust, on riders at Volksbanks.
– JC, UK
Like PEZ? Why not subscribe to our weekly newsletter to receive updates and reminders on what's cool in road cycling?