Tour Rider Feature: Continuing with Ed Hood’s series of ‘English speaking’ Tour de France pioneers, Ed moves onto Derek Harrison. Sadly Harrison died in May, 2018 in his adopted home of France, but his pro career spanned the 60s and 70s and include many top wins and two appearances in the French Grand Tour. Here is his story by Monsieur Hood. 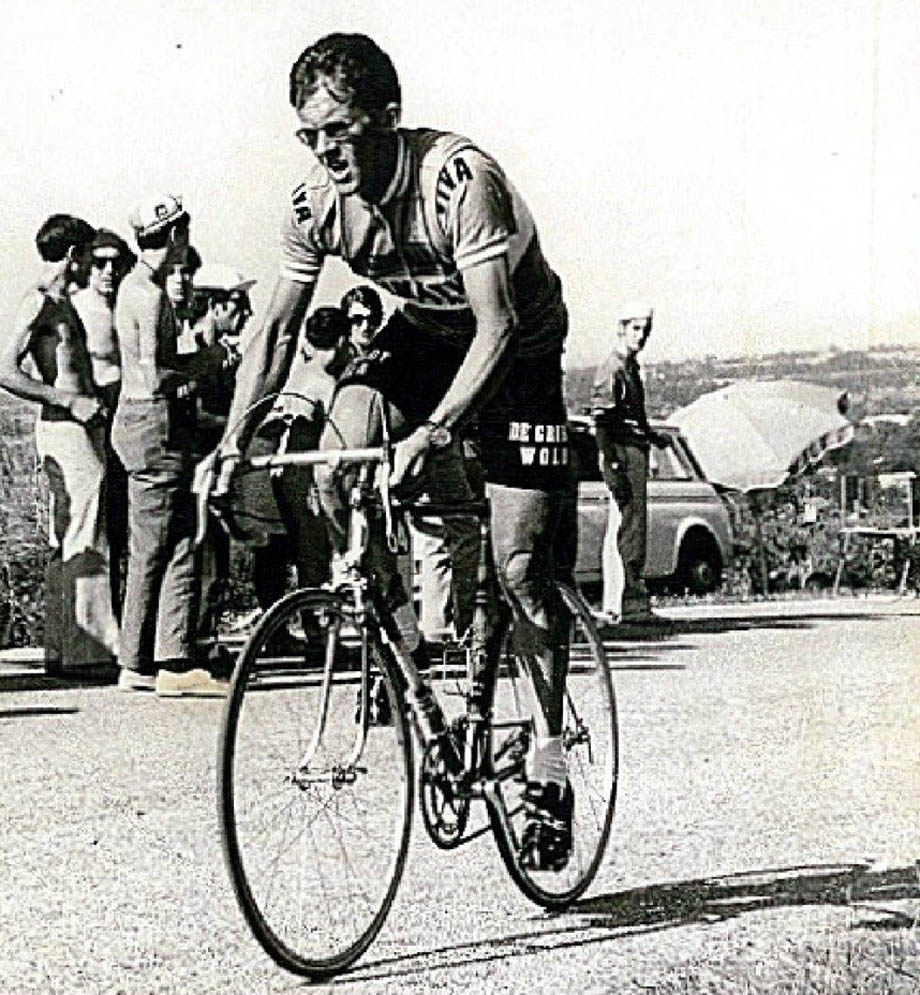 British Tour de France winners are now commonplace but back in my youth, we could only dream of such things; however we had warriors out there, battling Johnny Foreigner in his back yard – Barry Hoban, Mike Wright and a chap called Derek Harrison. But somehow it passed me by that I’d lost one of my boyhood heroes. 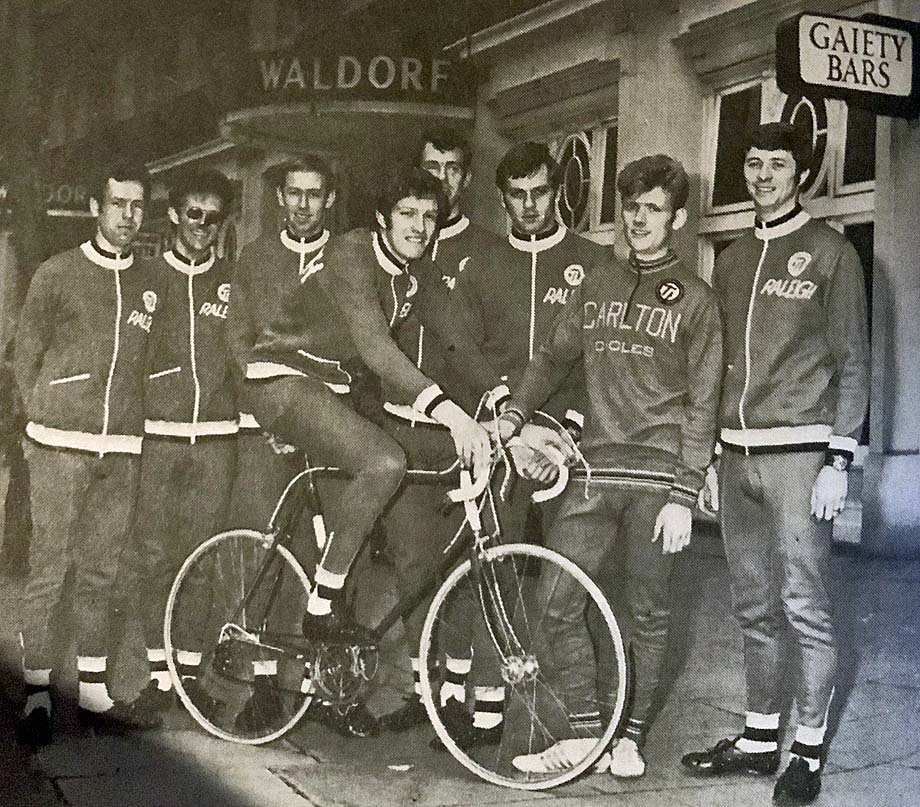 Derek Harrison died in Pernes-les-Fontaines, Provence, France on May, 12th last year at 74 years-of-age. Like many, I was introduced to continental racing through the pages of the late lamented International Cycle Sport magazine. Most of the names pictured and written about were foreign, there was no ‘Mondialisation’ in 1970; but one rider who I thought looked super cool and whose name I didn’t have to wrestle with was Englishman Derek Harrison with his perfect ‘born to ride a racing bicycle’ position and tinted shades. 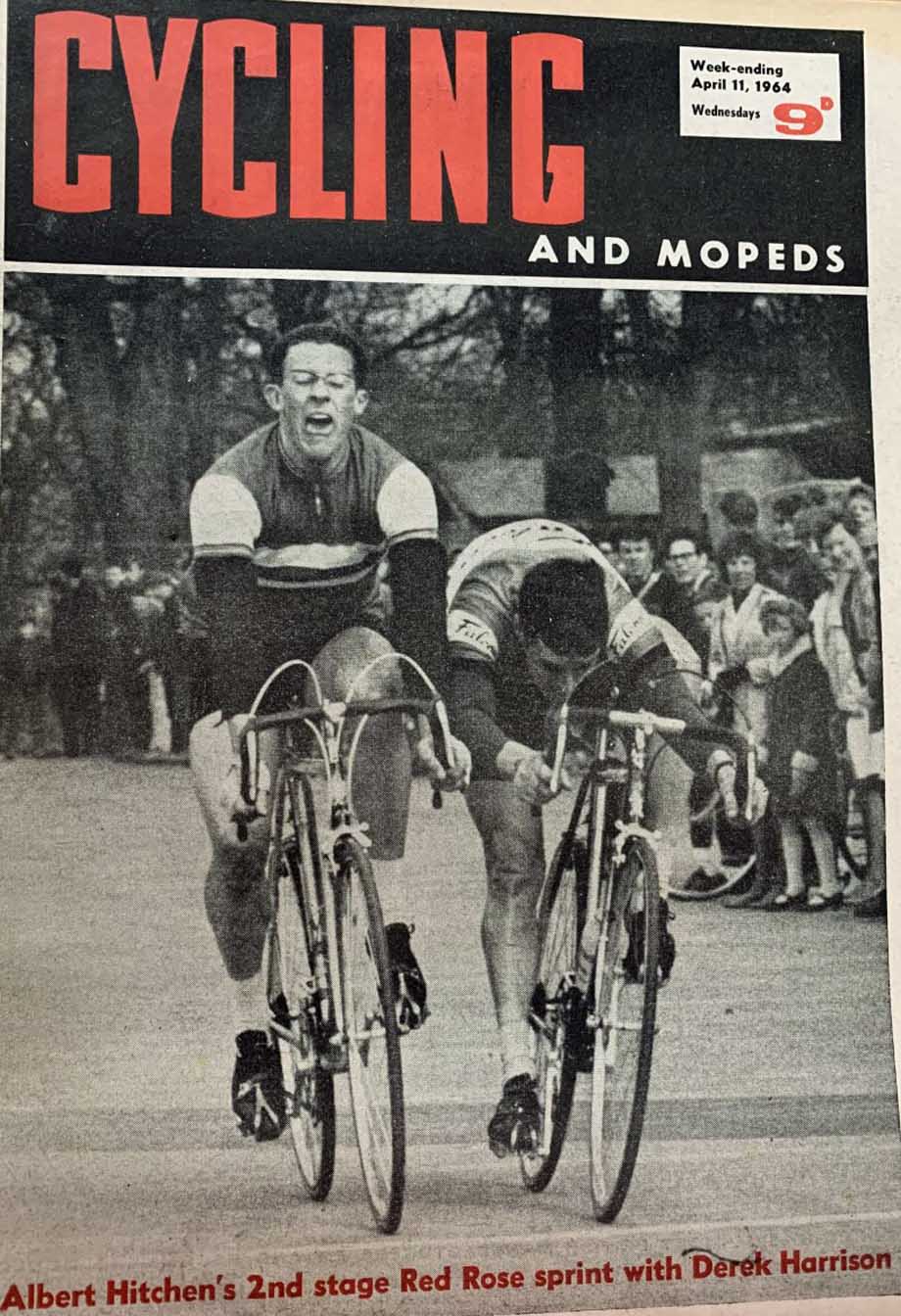 Born in Birmingham in 1944, he was good from the start, winning the Division Junior Road Race Championship in 1960 and taking silver in the Junior National Road Race Championship the same season. Former British Amateur Road Race Champion, Grant Thomas raced against Harrison back in that era; “Derek was an ‘old’ junior, the British cycling Federation rule back then was that you were a junior for the full year if your birthday came after January 1st and Derek was born in early March.

I have to say that I didn’t see much of him in those races, he was usually up the road! He was unbelievably stylish, he never looked like he was trying, when you’re young and impressionable he was the kind of guy you sought to emulate style-wise.” 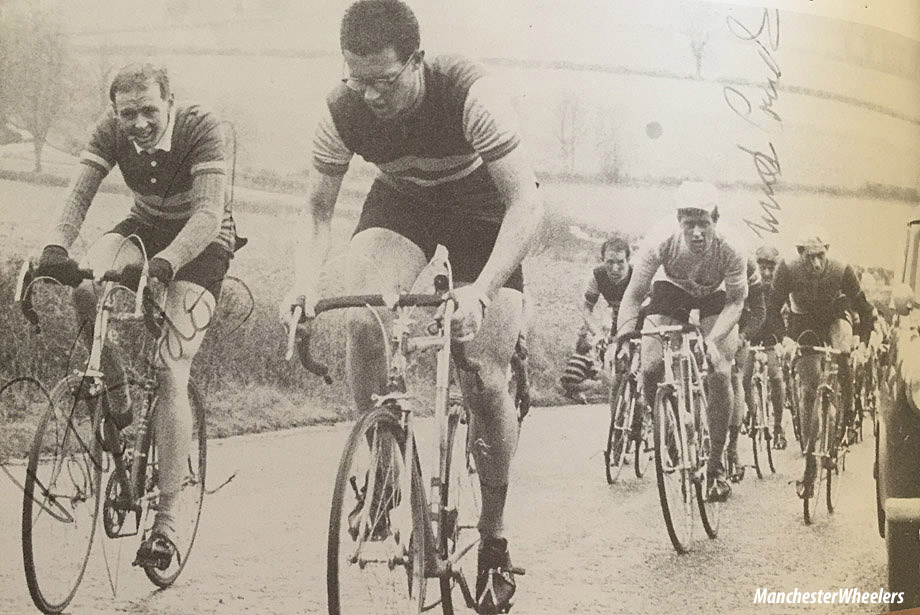 Harrison was with the Saracen Road Club until the end of 1962 before joining the famous Manchester Wheelers – World Champion sprinter Reg Harris’s club. By 1963 Harrison had become a prolific winner on the road and took the Star Trophy – based on results in quality national level road races across the season – at just 19 years-of-age. 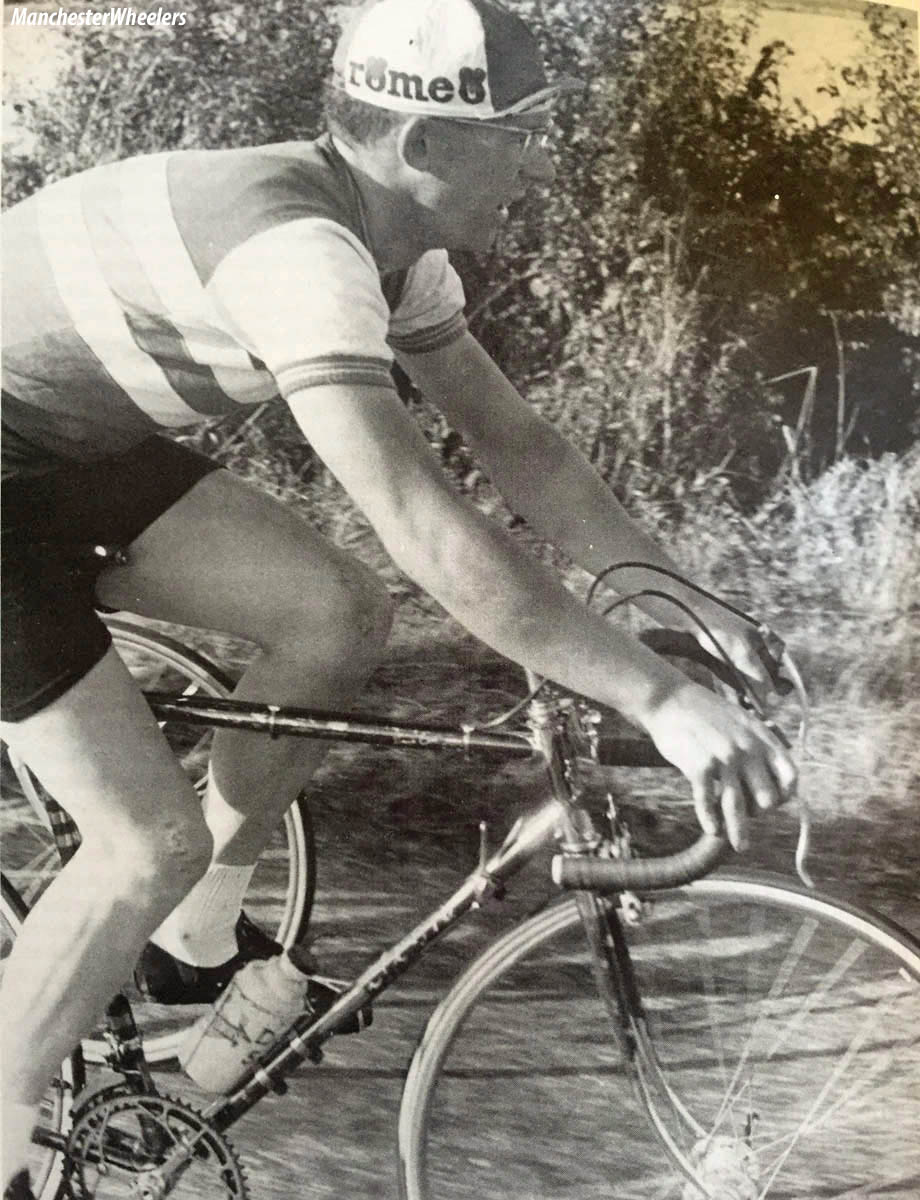 Season 1964 saw him established as one of Britain’s premier riders, winning the prestigious Harp Lager Grand Prix, the equally desirable Archer Grand Prix and finishing second to hard-man and big finisher, Albert Hitchen in the Lincoln Grand Prix. Albert Hitchen was an ‘independent’ or ‘semi-pro’ and along with men like Bernard Burns and Billy Holmes provided stiff opposition for the amateurs they raced against in that era.

Harrison rode the Tokyo Olympics in 1964 but he didn’t go as well as he’d hoped; his recovery from a bad crash earlier in the season in the Vaux Grand Prix perhaps not complete? But he also found time in 1964 to finish second to pursuiter par excellence and future four times professional champion of the world, Hugh Porter in the British Pursuit Championships. 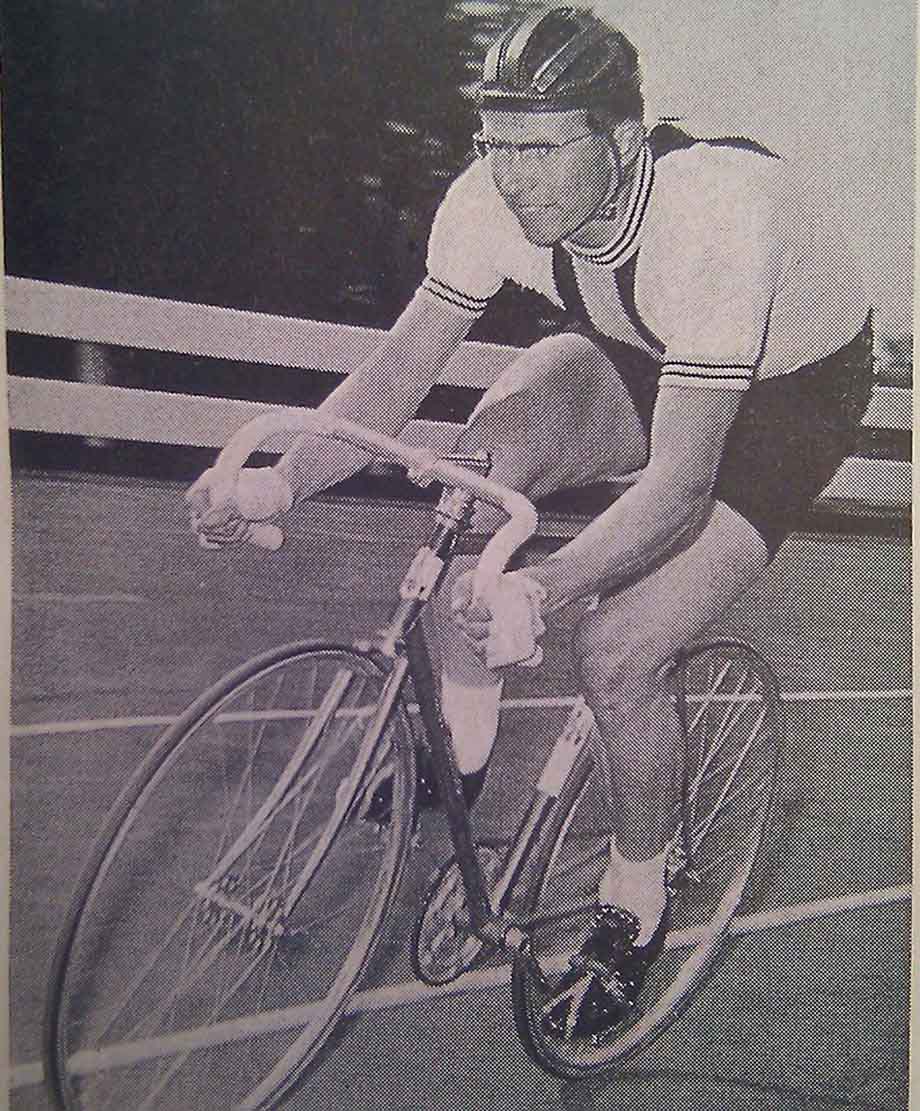 Harrison on the track

Thomas tells us; “He was one of a very few guys who could just roll up to the British Pursuit Championship with no specific training, jump on his track bike and get close to a specialist like Porter.”

Giving up is civil engineering studies at Manchester University Harrison moved to France in 1966. Having been good at French at school he soon settled into the way of life and notched up the wins; Orleans and Troyes being just two, he was second in the Route de France, a major amateur stage race and finished fourth in the 75 kilometre Amateur Grand Prix des Nations time test where Bernard Thevenet was third and Luis Ocaña fifth. 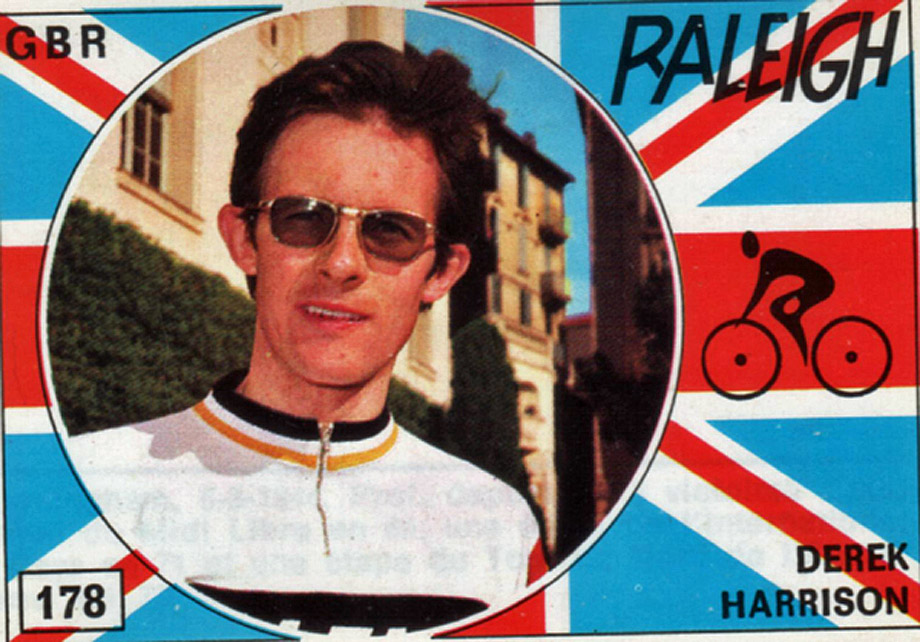 The following season he won the Route de France, took two stages in the Circuit des Mines, was ninth in the Tour de l’Avenir – ‘Tour de France of the future’ – and second in Paris – Troyes one of France’s oldest Classics. Thomas remembers; “there was no internet back then so we weren’t aware of all of his results but we did know he was one of the best amateurs in France during those years.” 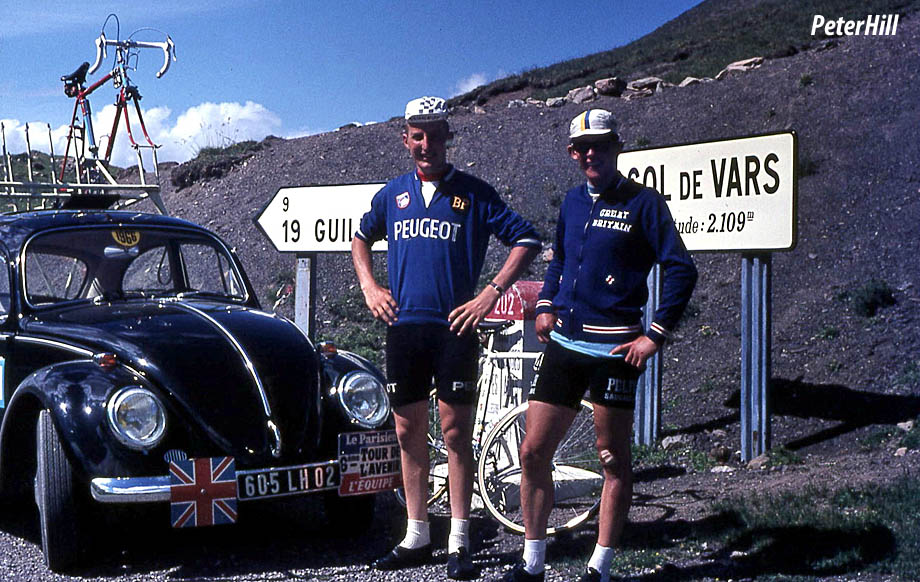 He turned pro with Frimatic-Wolber-De Gribaldy for 1968, the latter name being that of Jean De Gribaldy, an aristocratic figure who ‘discovered’ the likes of Sean Kelly and who mentored Harrison in his amateur days. De Gribaldy owned a large furniture business as well as taking a keen interest in his team and riders. 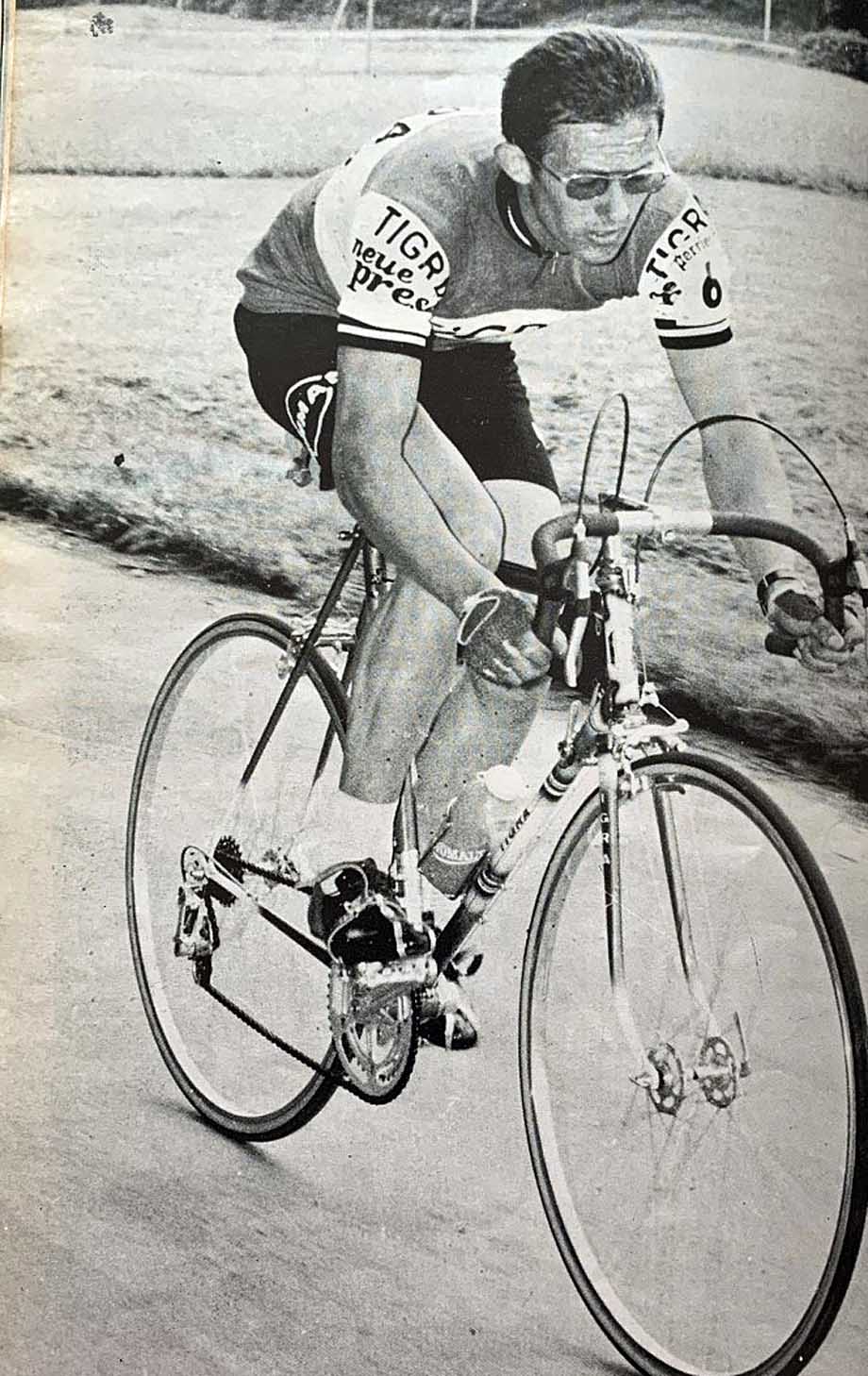 Harrison’s best results being in 1968 were third in the individual time trial and winning the king of the mountains in the Tour de Suisse against the best opposition of the day. He also started the Tour de France that year but was DNF after a crash led to an infected knee which meant a month’s stay in hospital. As with Merckx’s infamous crash at a track meeting, behind the Derny after the Tour in 1969, Harrison was never quite the same rider again. But in 1969 he had perhaps his most notable professional result, winning a stage in the Midi Libre ahead of Luis Ocaña.

Guy Caput, son of Harrison’s team manager told British writer William Fotheringham in his book, ‘Roule Britannia’ that; “he was a fine climber and rime trialist and not a bad sprinter.” Caput continues that his father felt Harrison had the class to be a Tour de France contender. On the back of the Midi Libre Harrison then rode a solid Tour de France, third on Stage Two and 32nd overall but for the first part of the race had been in the top 10 on GC until a ‘jour sans’ on the Col de la Madeleine.

Thomas feels that perhaps Harrison’s efforts to lose weight to improve his performances in the mountains perhaps contributed to a loss of power and strength; “they didn’t have the science back then,” observes Thomas. Interestingly, in his ‘Roule Britannia book,’ Fotheringham remarks on how slender Harrison the ‘distinguished, academic’ looking man in front of him is; “I’m obsessed with my weight” he tells his interviewer.

But in his interview with Fotheringham, Harrison alludes to the hard school he had signed up with; “As an amateur, they treat you like a rare bird, when they realise you are not going to make it, you’re in the dustbin.” Thomas was more succinct; “De Gribaldy ditched him after his knee injury.” 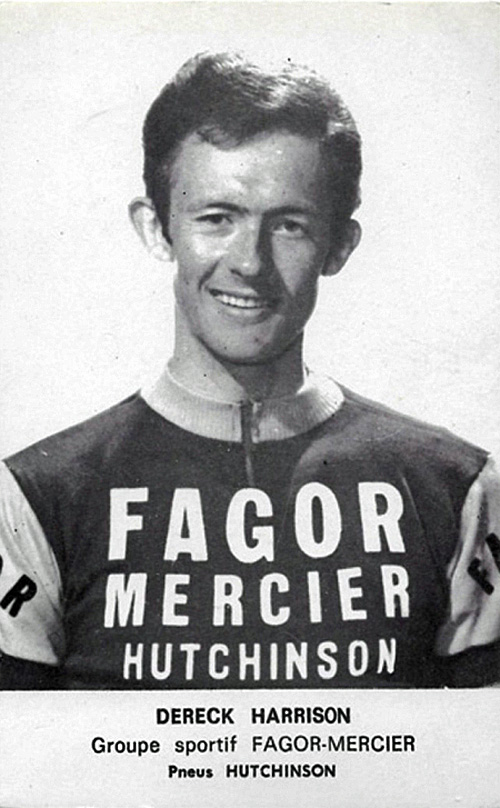 For 1970 Harrison was with Fagor-Mercier with second on a stage of the Tour of Catalonia the hi-lite. British based TI Carlton was his team for 1971 with whom he took a stage in the International Cycle Sport Three Day and was second on stage of Paris-Nice. The following season he won the Netherseal GP and the prologue in the Tour of the North in the UK along with a raft of domestic placings. He was also back at the Tour de Suisse where he took fourth in the mountain time trial and seventh on GC. 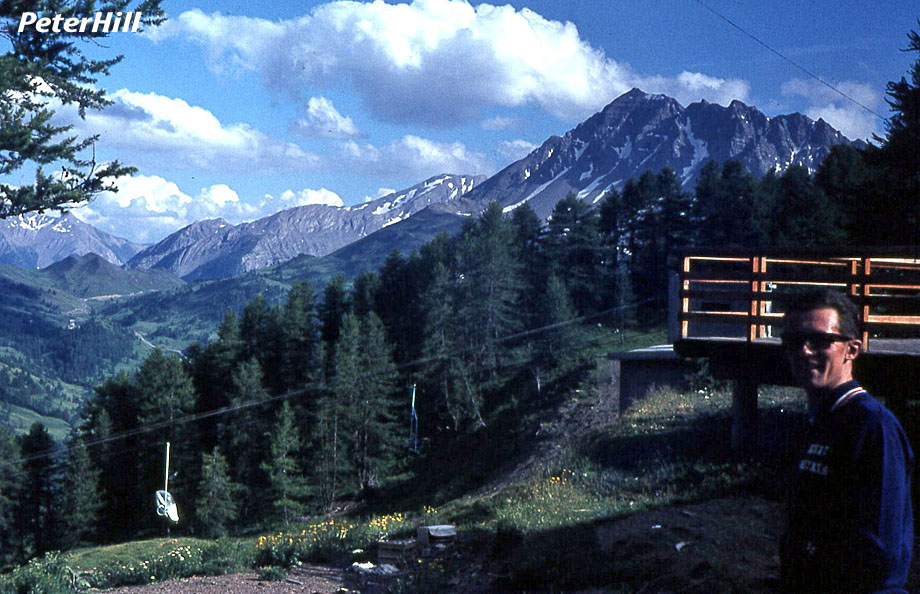 The team became TI Raleigh for 1973 with is best result third in the GP Monaco. Thomas remembers being told by the late Trevor Bull [British Professional Sprint Champion and criterium specialist, ed] who was a team mate of Harrison’s, that when Harrison when heard that there was going to be a ‘Raleigh Euro Team’ with the late Peter Post at the helm for 1974, he made the decision to retire. And that was the end of his professional career, settling in Troyes to work with his father-in-law’s tyre business. Latterly he moved to Provence, no doubt in search of the mild climate and laid back lifestyle in ‘Roman France’. 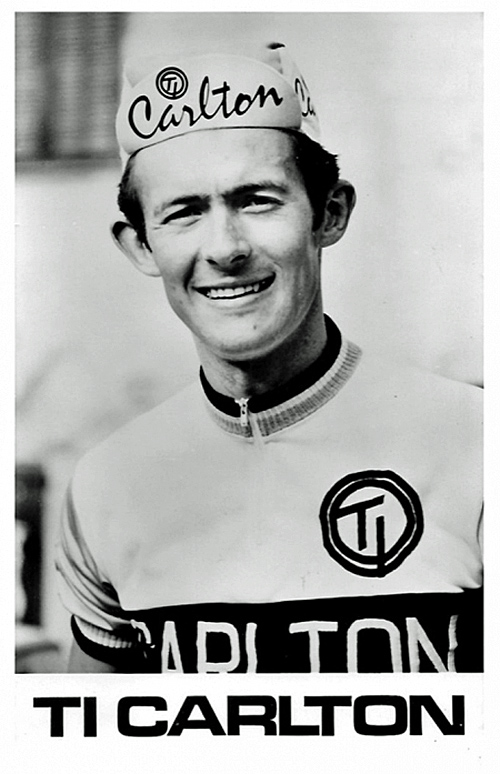 Thomas thinks that Harrison’s nature meant that he never got the publicity or recognition that other British professionals of that era did; “he was a quiet guy, unassuming but so stylish.”

That’s just how I remember him; ‘so stylish’ – rest in peace Derek Harrison, gifted amateur and a professional we never saw the best of. 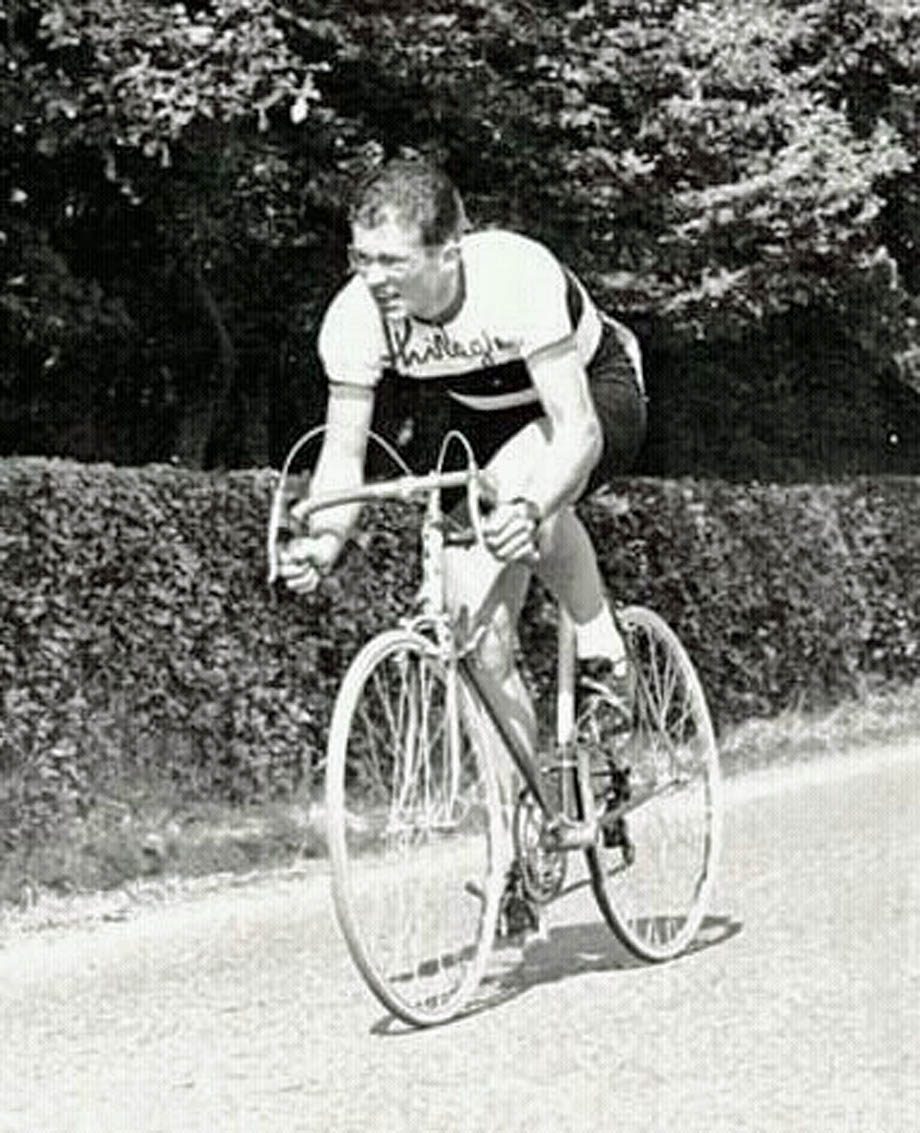 Harrison had the style

# Big thanks to Peter Hill and all the unknown photographers. #

Dollars are Flooding Into Sports – Why Isn’t Cycling Getting Any of Them?