Best Of 2016: The love of negroni by ‘The Pez’ is well known and he shares that liking with Chuck Peña. One of Chuck’s favorite places for a meal and a negroni in Washington is Coppi’s Organic Restaurant; the food, drink and atmosphere is great… and there is that big cycling connection. 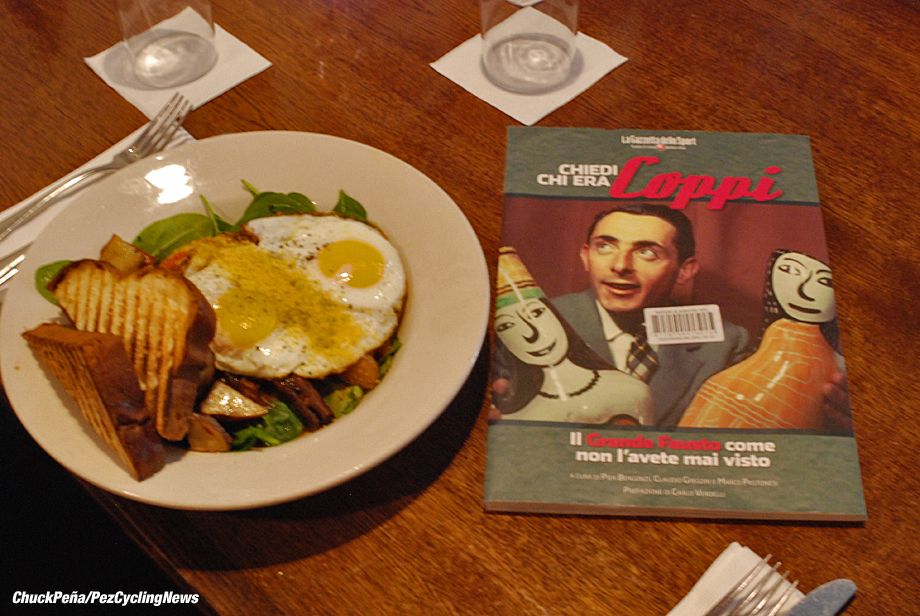 If your travels take you to Washington, DC, a must eat restaurant is Coppi’s Organic on Connecticut Avenue in the Cleveland Park neighborhood – just up from the National Zoo. As the name suggests, the menu is sourced from organic farmers and food cooperatives. And if you’re a cyclist, how could you not eat at a restaurant named after Fausto Coppi?

A little history about the restaurant. Before it was Coppi’s Organic it was just Coppi’s and on U Street in what was then, in the early 90s, a recovering neighborhood that was a little bit bohemian and a little bit trendy (it’s now full-fledged urban hipster trendy). The original owners were Pierre Mattia and his wife, Elizabeth Bright, who was also the chef. It would be cool to be able to say that Pierre was a relative of Fausto Coppi alas not. But Pierre was a former bike racer and, like me, a huge fan and admirer of Coppi. Born in Paris, Pierre actually grew up in the Liguria region of Italy, where Coppi often trained. Coincidentally, Pierre was born in 1946. The year of Coppi’s first Milan-SanRemo victory, which he won by a whopping 14 minute margin and, according to local legend, stopped for coffee at Caffe Liguri Pasticceria (now Caffe Pastecceria Piccardo) in Imperia about 13 kilometers before the Cipressa climb.

Our first visit to Coppi’s was for the name, but we kept going back for the food. The brick oven pizzas (some traditional, some inventive, all of them not Domino’s) were just incredible. Coppi’s not only became a place where we ate, but also the sponsor of a team I created: Unione Sportiva Coppi’s. Although his racing days were behind him, Pierre rode with the team and dispensed sage, old school training advice such as, “Pedal faster.” In the early 2000s, Pierre and Elizabeth added the “organic” moniker. 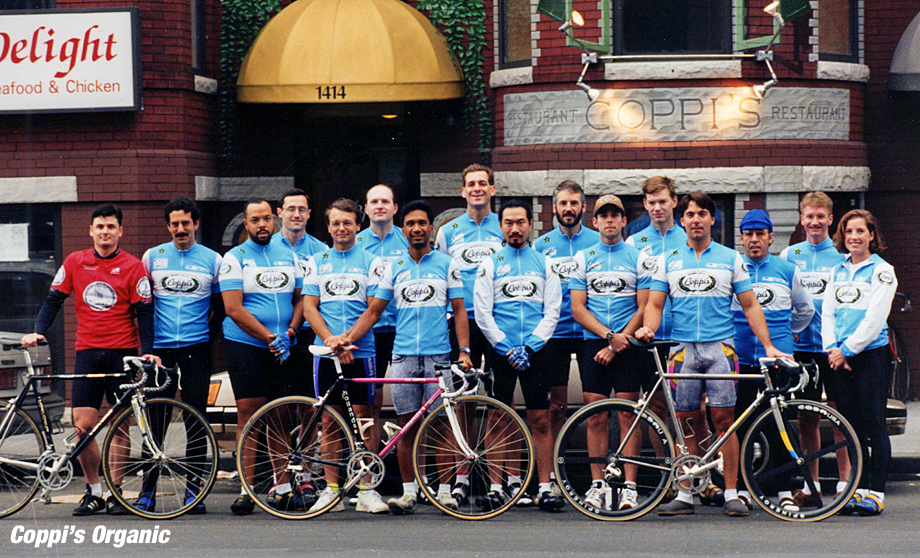 Eventually, Pierre and Elizabeth decided to move back to Italy and the restaurant was taken over by brother and sister, Carlos and Nori Amaya.  Carlos actually was a cook at Coppi’s and learned under the tutelage of Elizabeth Bright. Tragically, Nori was killed in November 2009 (her case remains unsolved). And in July 2012, Coppi’s Organic was one of many restaurants on the U Street corridor in the Cardozo neighborhood forced to close due to redevelopment construction which all too often is the price of urban gentrification.

Happily, after a 2 year hiatus, Coppi’s Organic was re-born in the Cleveland Park neighborhood in November 2014. My wife, daughter, and I have been there many times since, and have introduced many friends – cyclists and non-cyclists – to Coppi’s Organic’s culinary treats.

The interior of the new Coppi’s Organic is both different and the same as the original Coppi’s. What’s different is that the seating is a little more open and the front windows (which can be opened in nice weather) let in a lot of natural light compared to the U Street restaurant, which had a taller ceiling, but was darker overall.

What’s the same is the church pew benches used for booth seating. And the pictures on the walls – over two hundred. Naturally, Coppi proliferates. And the theme is definitely Italian. But the pictures run the gamut: Bartali, Anquetil, Poulidor, Merckx, De Vlaeminck, Major Taylor – just to name a few. Everything in vintage black and white. Some are iconic cycling photos (Coppi passing a bottle of water to Bartali) while others are simply nostalgic. You are surrounded by a bygone era of cycling. Some would say its golden age. 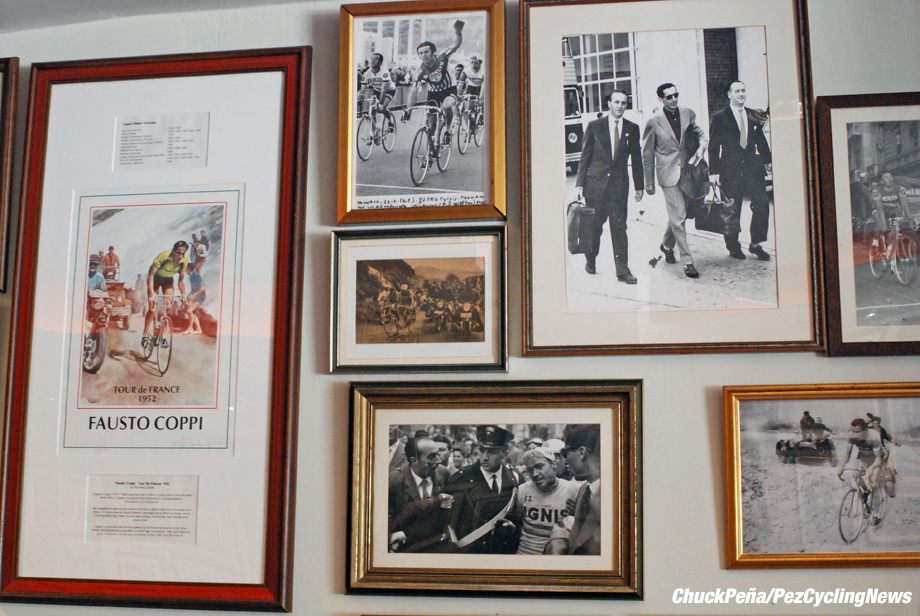 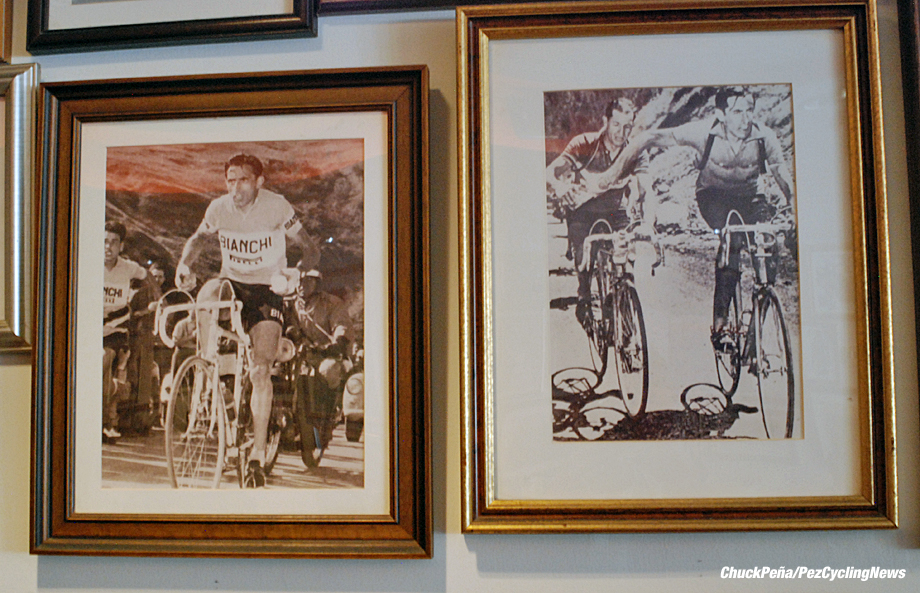 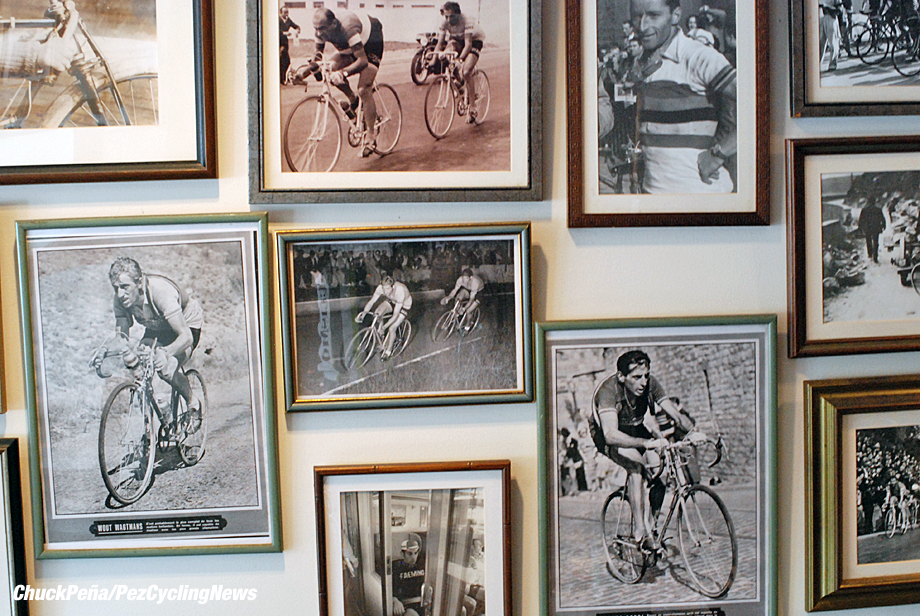 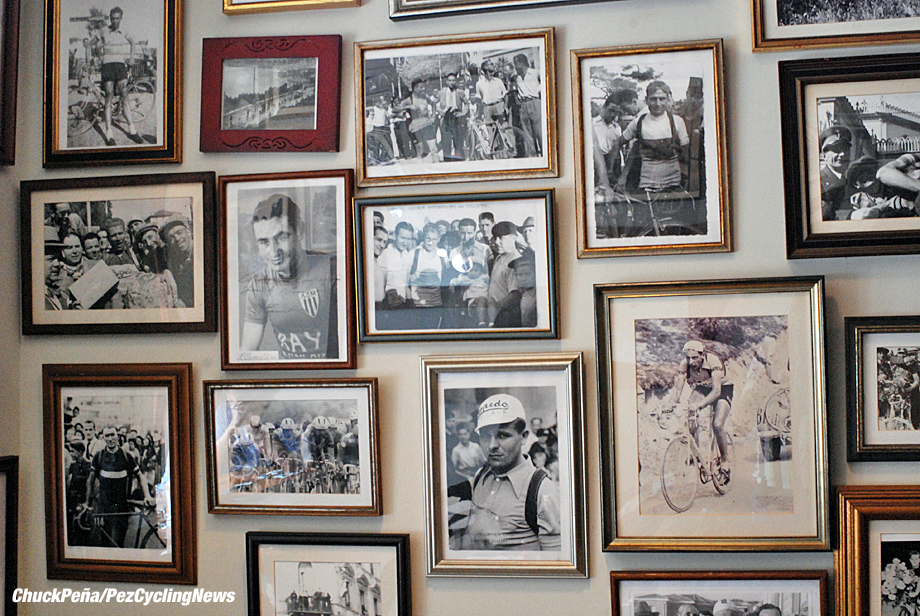 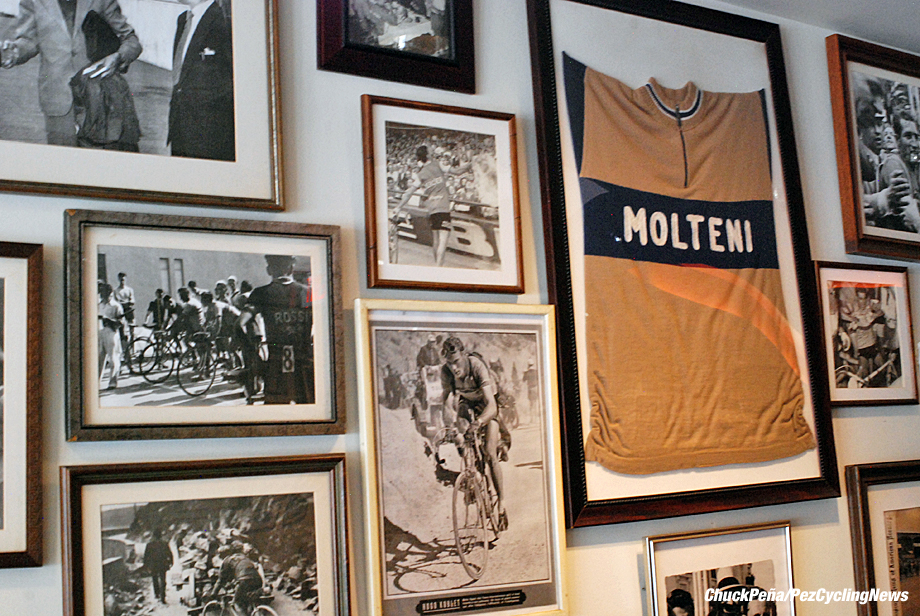 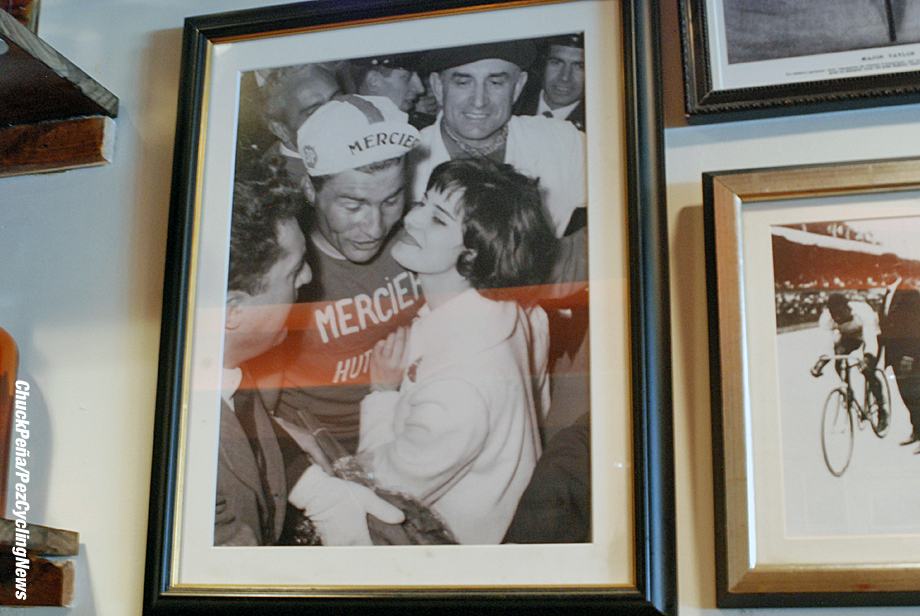 You’ll also find some jerseys on the walls. Like the pictures, they’re of a different era. But one more modern one is my original Unione Sportiva Coppi’s team jersey signed by none other than Greg Lemond. 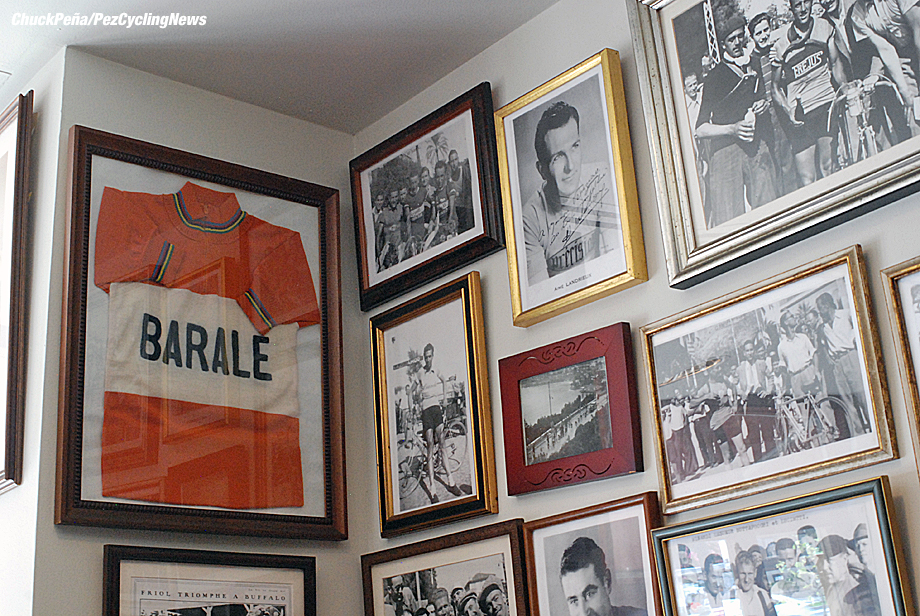 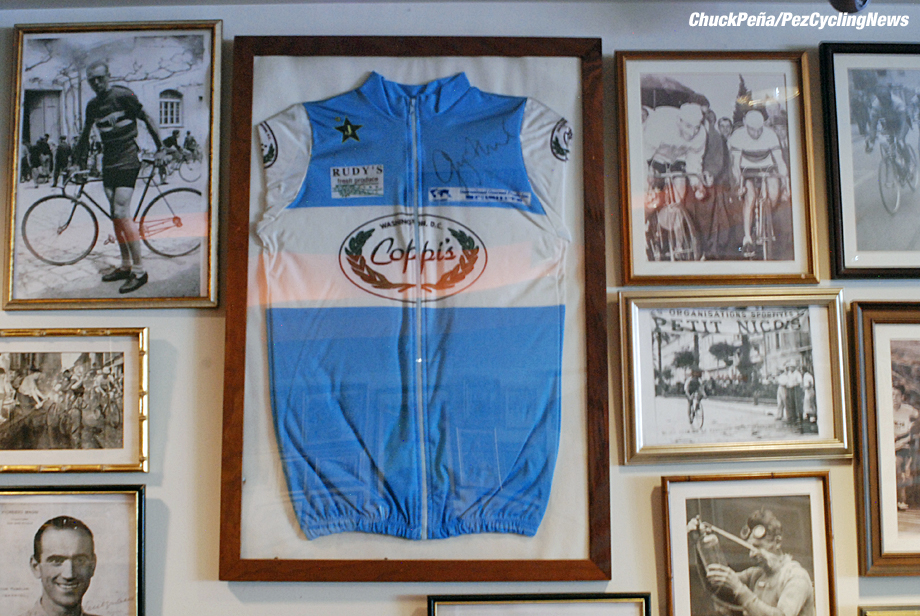 No, that’s not a wool jersey

One thing missing from the original Coppi’s are the vintage bicycles, because there just isn’t room in the new space. Oh well, you can’t have everything.

But you don’t go to a restaurant just to look at pictures on the walls. You go to eat. And the food at Coppi’s Organic – inspired by Fausto’s home region of the seaside Ligurian Riviera of northern Italy – will not disappoint. You can whet your appetite with antipasti that includes a spinach salad with Italian bacon and Portobello mushroom; smoked salmon with mozzarella, prosciutto, salami, and capiccollo; our favorite, ever so lightly breaded (Cajun cornmeal, actually) calamari; and – if you want to try something you won’t find at a lot of other restaurants – octopus and calamari with red potatoes. 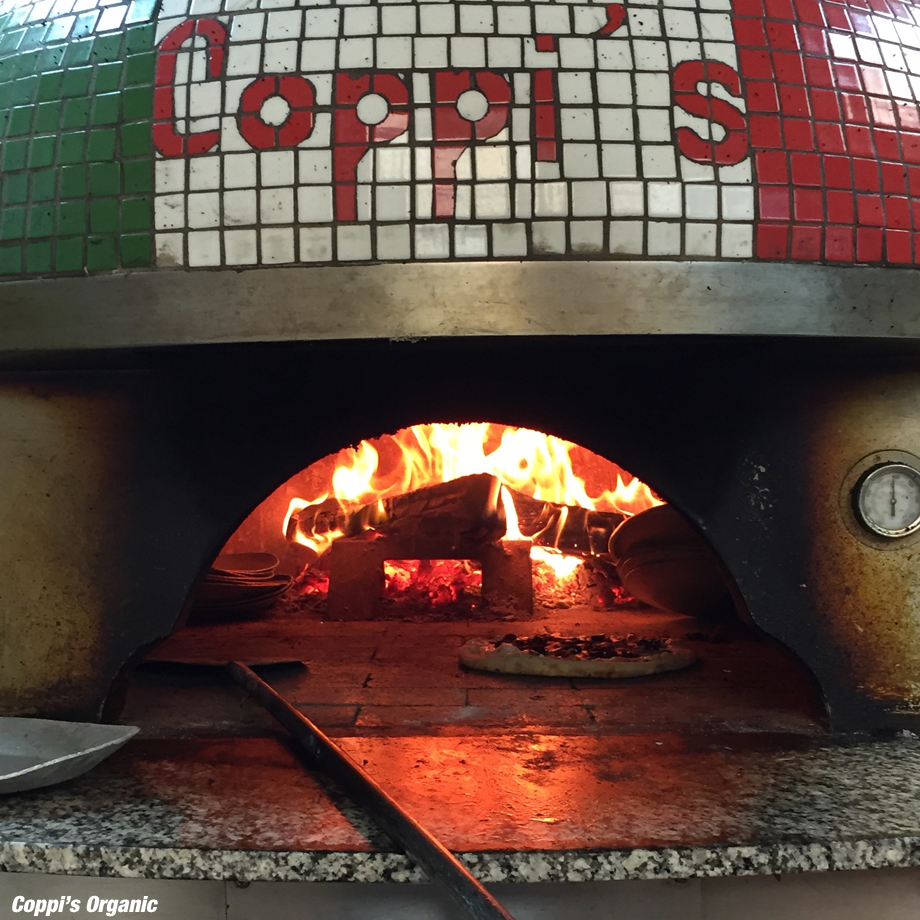 Everything is cooked in a brick oven 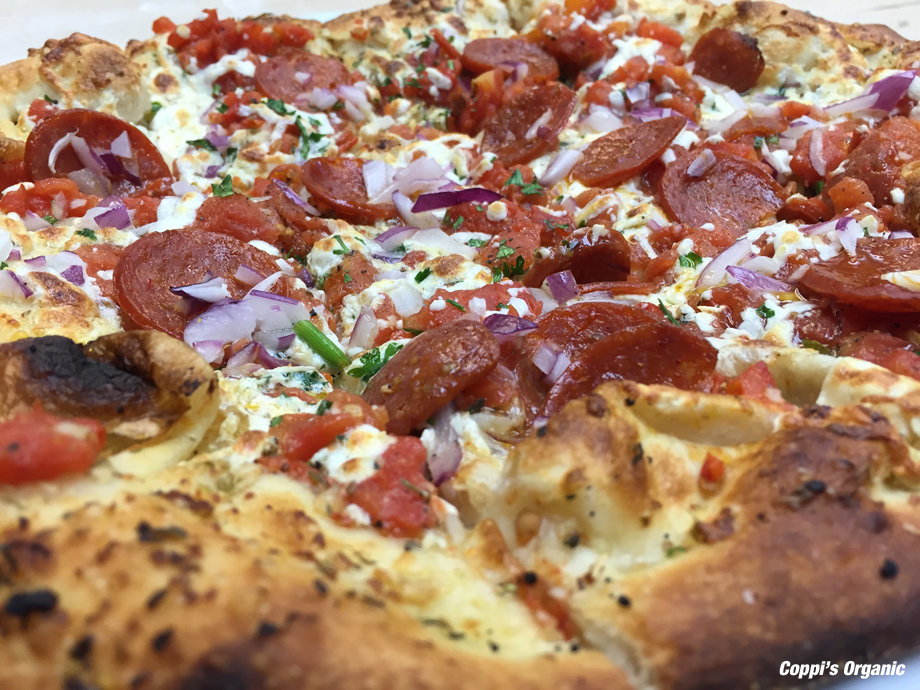 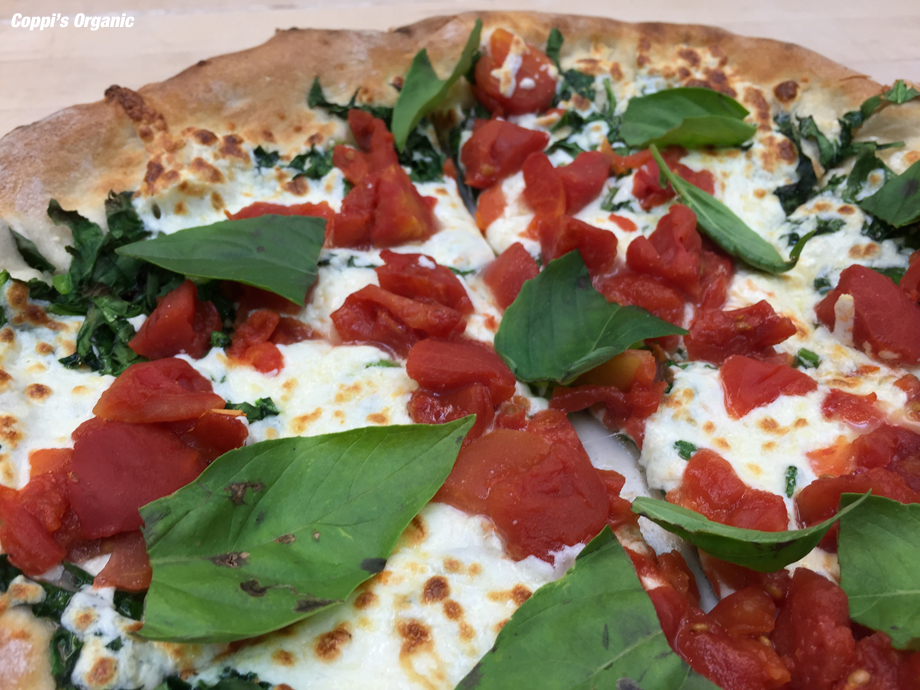 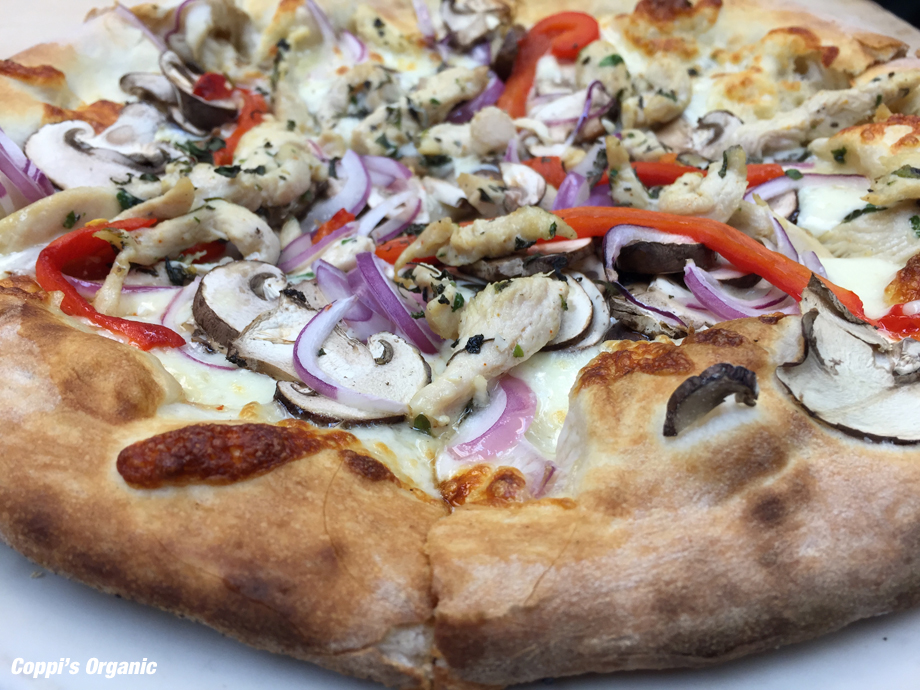 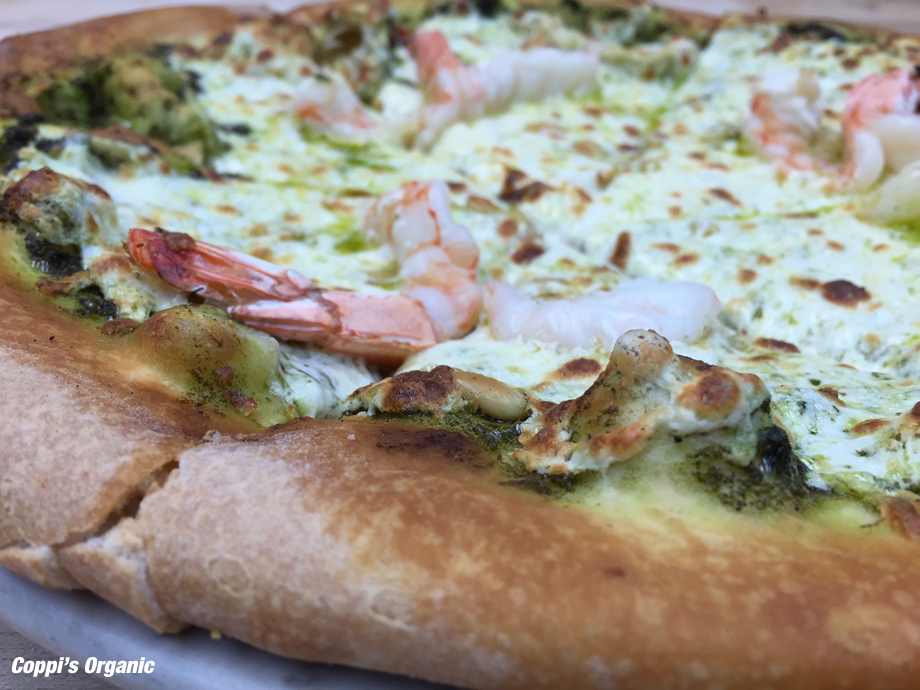 If you’re thirsty, there’s a fairly extensive wine list and you don’t have to break the bank to enjoy a good bottle of wine (especially on a Tuesday night, which is half-price wine night). Our usual host, Tom Bindley, can make a recommendation if you can’t decide for yourself. And, of course, there are all manner of cocktails available from the bar. 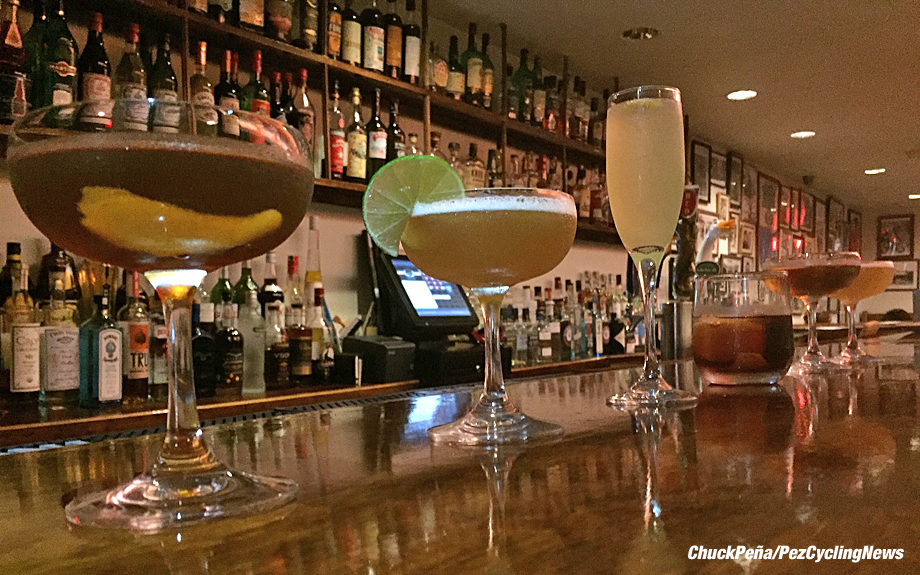 Did someone order a drink? 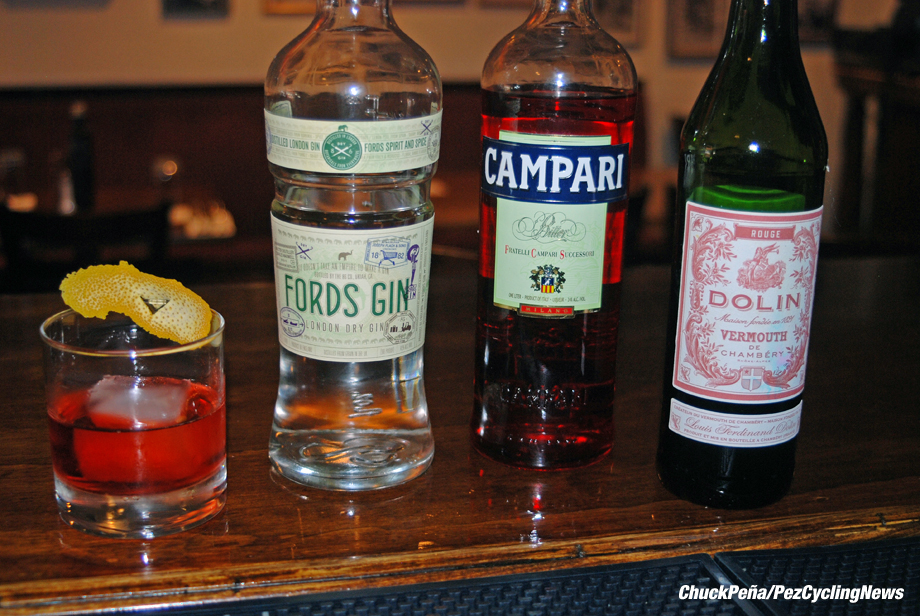 If it’s PEZ, it has to be Negroni 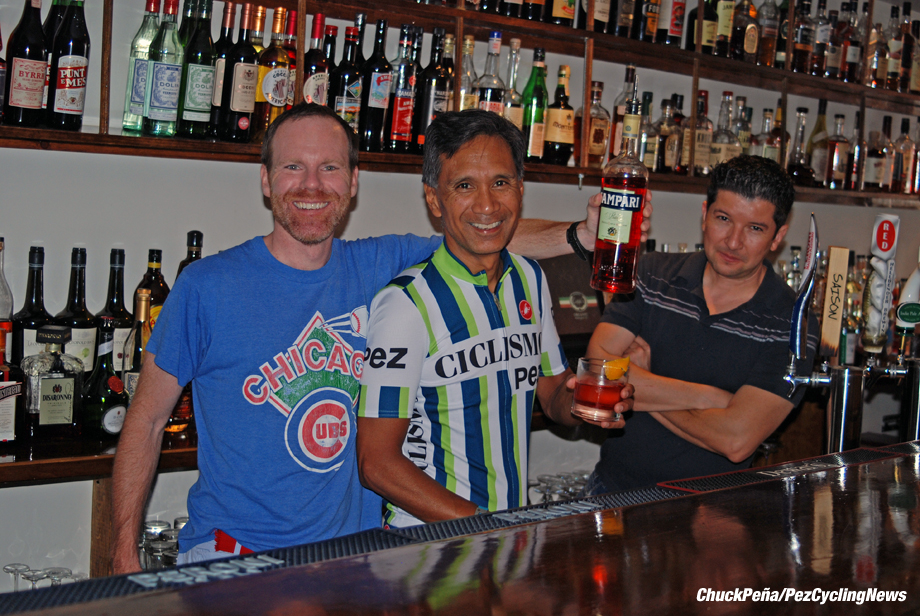 If you want pasta instead of pizza, some of your choices include mushroom ravioli, eggplant gnocchi, a more traditional beef Bolognese, and fettuccine with scallops and shrimp. But my favorite is the lasagna made with strip steak and a béchamel sauce. If you’re inclined towards a “regular” entrée, there’s New Zealand rack of lamb chops, Ecuadorian mahi mahi with cayenne citrus sauce and fennel mascarpone, and grilled to order bistecca. And there’s always some sort of special that will be sure to be inventive and delicious. Whatever you decide to eat, it will be a meal you will savor and remember. 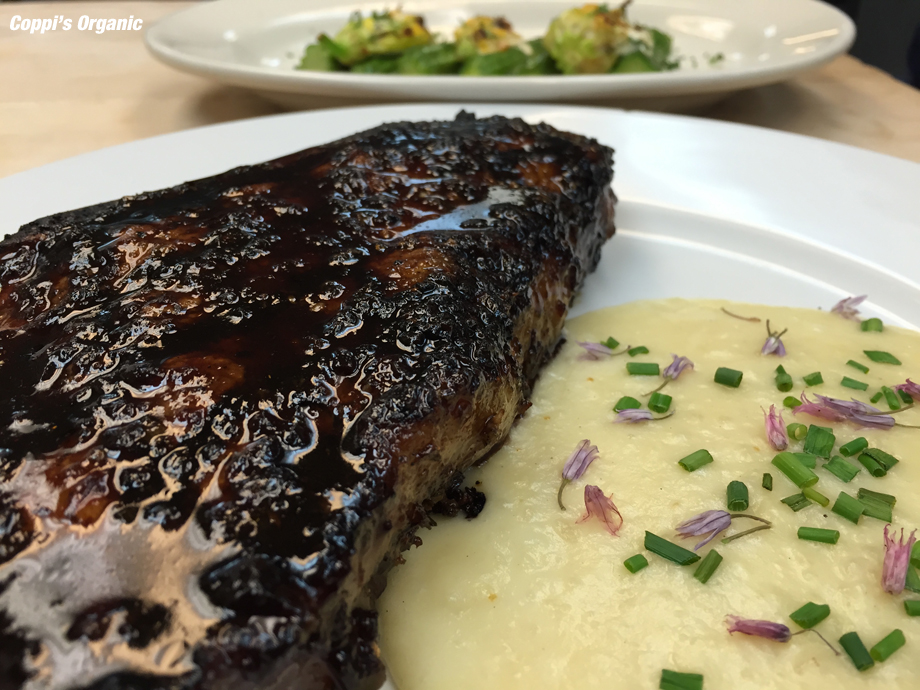 And it wouldn’t be dinner without dessert or dolci. The problem is deciding between the chocolate hazelnut calzone, tiramisu, and zabaglione. It’s like asking someone which one of their kids they love more. 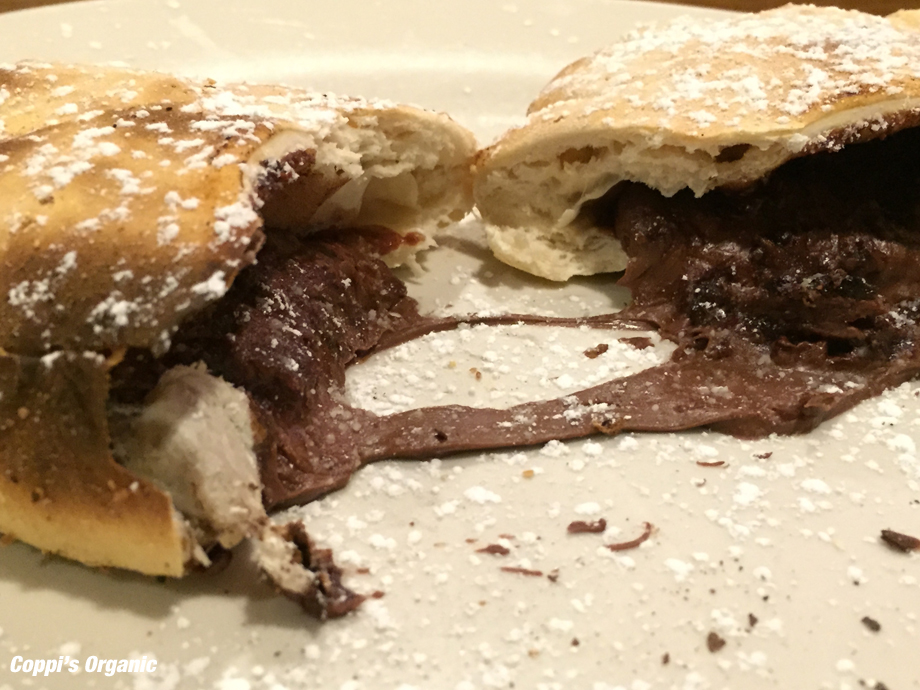 If you don’t go to Coppi’s Organic for dinner, go for weekend brunch.  We were actually their very first customers for brunch when they started doing brunch this year – and whether you go for dinner or brunch, the staff at Coppi’s Organic will be welcoming, friendly, and attentive. They have a menu designed by brunch chef Mark Seidler to satisfy everyone’s eating preferences. How about a vegan Calcutta-inspired chickpea flour omelette with spinach, onion, and bell peppers? Or vegetarian huevos rancheros made with Cuban black beans? Our daughter loves grits and there are two to choose from: grits with shrimp, Andouille sausage, ham, and egg or grits with bacon, maple syrup, and egg. If you’re a really hungry carnivore, try either the Chicago Short Rib Hash or the Tijuana Trucker’s Breakfast. For something still on the traditional side but a little out of the ordinary, the salt cod omelette is a tasty delight. There are also blueberry pancakes that are anything but ordinary. And it wouldn’t be brunch without bottomless Mimosas or Bellinis! 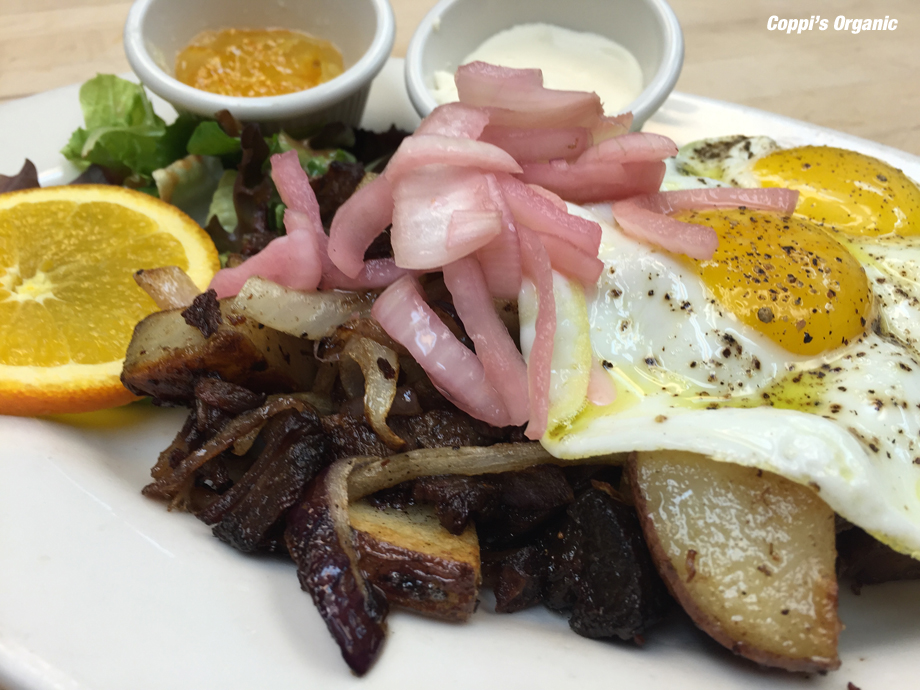 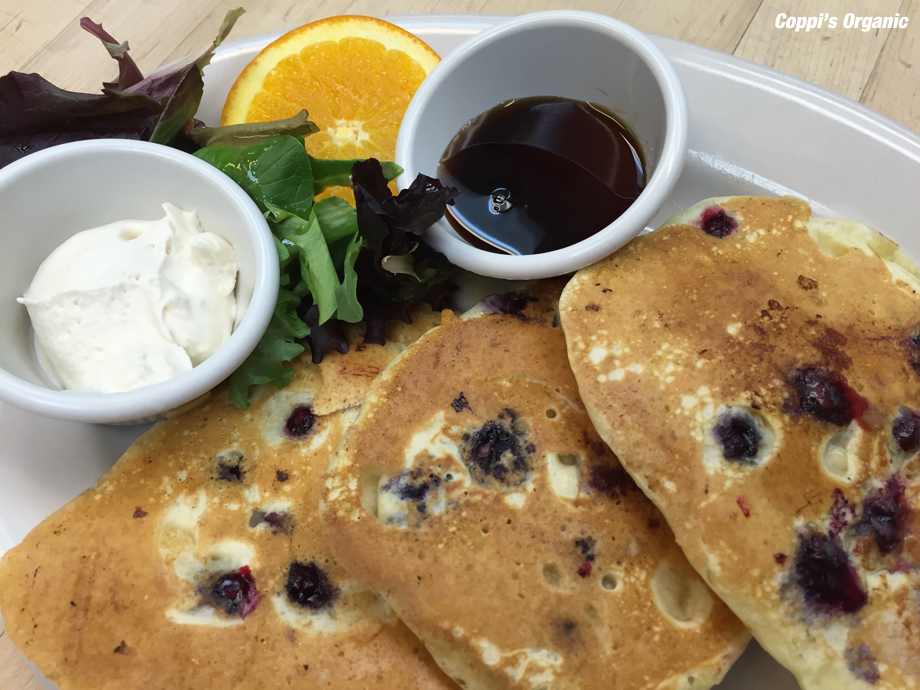 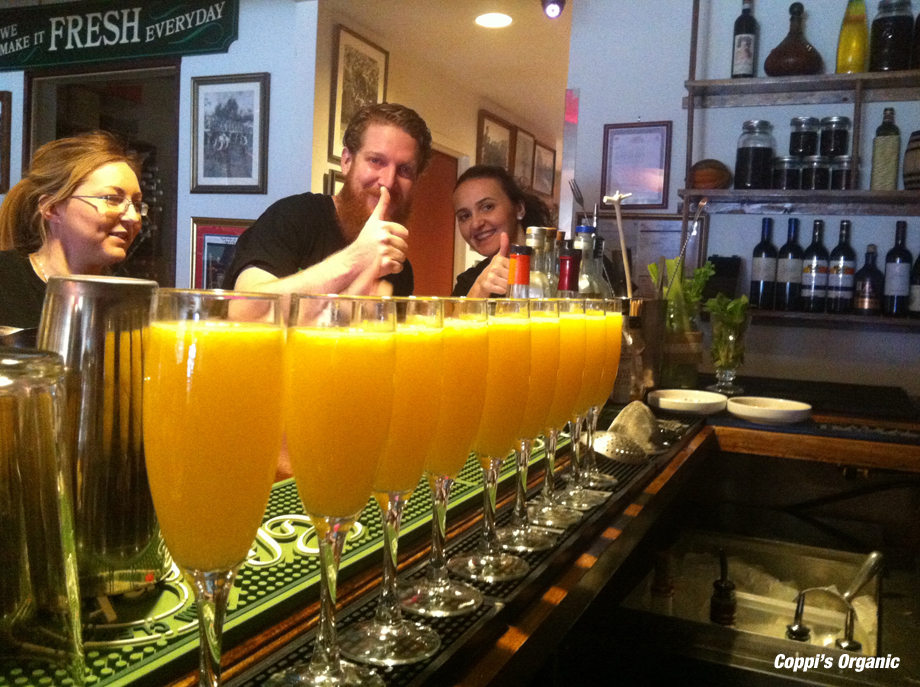 You can never have too many Mimosas 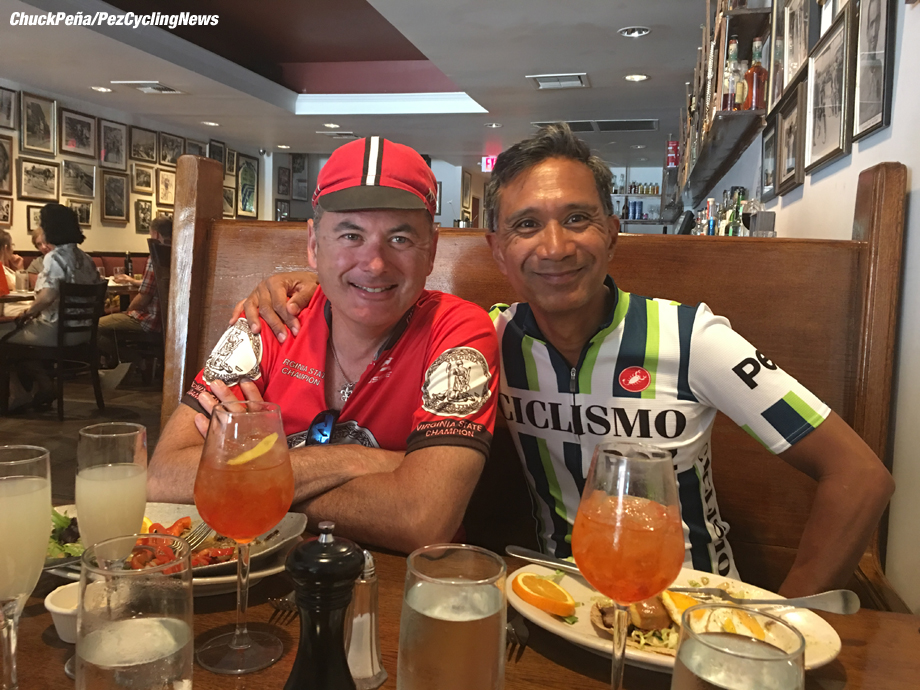 The only thing better than riding, is riding to brunch at Coppi’s Organic with my former Coppi’s teammate, Seth Turner

Washington, DC probably isn’t at the top of your list for cycling destinations  – although DC is a cycling-friendly city by US standards, you’d never know you’re in the city when you’re riding in Rock Creek Park, and there’s a lot of great riding nearby in both Virginia and Maryland.  But Coppi’s Organic should be on your list to soak in a little bit of cycling history. There are no TVs or wi-fi, so while you’re enjoying food and drink you’ll have to engage in the fine (and somewhat lost) art of conversation about the exploits of il Campionissimo and the other past cycling greats who will be your dining companions. Buon appetito!

Pez contributor Chuck Peña is a former weekend warrior racer who now just rides for fun, but every once in a while manages to prove Fausto Coppi’s adage true: Age and treachery will overcome youth and skill. He lives in Arlington, VA with his wife, Karen (who works for Revolution Cycles), his daughter, Marin (an aspiring junior golfer who can beat him, but not all the time … yet), and their dogs, Cooper and Roxy. You can follow him on Twitter @gofastchuck