Again, the beacon was lit, and the ships came in. A big bag of ‘Reader’s Tunes’ emails arrived just before Saint Nick, and we’ve been sorting ‘em ever since. It’s a year of crazy weather, so a good thing we’ve got plenty of audio accompaniment to keep the trainers turning…

Since I’ve offered my suggestions, I’ll only offer these musings, regarding music among the readers.

Wow, Heavy Metal sure does seem to be a theme with you folks, especially Slipknot! I put them on my list in last winter’s Ear Candy, but this year they’ve been mentioned multiple times already! What gives? I know – it’s that driving, fierce tenacity. You gotta admit, some of their stuff just makes you clench your fists or, better yet, turn the pedals faster when you don’t think you can! And you don’t have to think about it too much. It’s not like riding to Mars Volta, Zappa, Tool, or any other math rock where I’ve sometimes fallen off the rollers while trying to figure out the dang time signature.

Keep sending in those suggestions, but please, say your name, where you’re from, and who you ride for, that’d be awful nice. 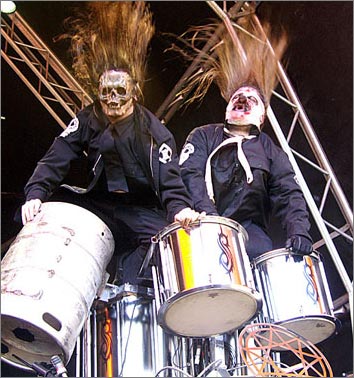 Doug Ollerenshaw – Health Net Presented by Maxxis Pro Cycling Team
Portland, OR.
My neighbors are really tired of me overplaying the following albums:
Beirut: Gulag Orkestar
Calexico: Garden Ruin
The Decembrists: The Crane Wife
Califone: Roots & Crowns
Horse Feathers: Words Are Dead
Everything from Andrew Bird (I was late getting on that bandwagon)
And of course, the weekly This American Life podcast.

Benjamin Robert de Luna – ProCon Cycling
There is everything on my MP3 player. I have Korn, Slip Knot, Snow Patrol, A Perfect Circle, Tool, Stabbing Westward, Weezer, The Doors, Switch Foot, Staind, She Wants Revenge, Red Hot Chilli Peppers, Nirvana, Nine Inch Nails, Muse, Moby, Linkin Park. The Slip Knot songs are the best to do intervals to. Songs like: Before I Forget, Vermillion, Pulse of the Maggots really rock hard and fit the effort you are putting out.

Martin Lisk
Gotta go with the basics here for time trials … any AC/DC … the whole disc of TALKING HEAD’S Stop Making Sense (the extended version of course) … FRANKIE GOES TO HOLLYWOOD Relax and Two Tribes …
any GEORGE THOROGOOD that isn’t too bluesy …
ANY OINGO BOINGO …
JUDAS PRIEST’S Breaking the Law … Runnin’ with the Devil … Sympathy for the Devil … Ghetto Life by RICK JAMES … And the Beat Goes on by the WHISPERS (song that based the Bridgestone tire commercials) … Get Down its Saturday Night by Oliver Cheatham .. Love Rollercoaster … A bunch of CHILI PEPPERS … PARLIAMENT FUNKADELIC … Shaft … THE GAP BAND .. Brick house … and Act Like you know by FAT LARRY’S BAND …

However, for when I’m just riding or training I go to shuffle, include the previous list and I add some smooth jazz, KEB MO, BIG HEAD TODD AND THE MONSTERS, and for all you mid-western guys, if you had heard of WILLIE PORTER, just imagine listening to his voice and guitar looking over mountain ridges … PURE BLISS.

Manny Samaniego – Southern California
My list to ride around the Potomac River in DC and surrounding areas is quite “diverse” as my girlfriend says…I prefer old tunes from AC/DC and Guns–n- Roses for when intervals are a must, along with some good euro techno to keep the beat going (Paul Oakenfold, Chemical Brothers, DaftPunk to name a few) while tackling the rolling hills…easier, “recovery” days are usually reserved for some Rolling Stones, some George Strait and Lyle Lovett (I lived in Texas for 14 years) and throw in some classical stuff and I can’t feel the cold anymore. I’m sure I will add some more stuff from the list provided by the other Pez readers.
Happy riding !!

Jason Judy – Newhall, CA
Really my playlist is all about what type of ride I want to do and my mood.
I don’t ride for a team per se, but the shop that I ride with all the time is Newhall Bicycle Co. My personal playlist for my mountain and some road rides are the bands as follows. • Hilltop Hoods – Hip-hop group out of Oz, way to hard to find their music in the US
• Atmosphere – just greatness
• Pennywise – So Cal punk at it’s best
• Rise Against – one of Chi Towns finest political punk bands
• Alkaline Trio – personal favorite band
• AFI – the old stuff, none of that new crap they call music
• Dropkick Murphys – Boston, bagpipes, and Guinness
• Funeral for a Friend – riding downhill
• The Lawrence Arms –
• P.O.S. –

Ryan Tuttle – Marine Corps Triathlon Team
PEZ, The music selection is completely dependent on the workout! The
trainer or rollers can be a mind-numbing experience of never changing scenery. Your attention span is sure to quickly wane unless you provide sufficient auditory stimulation. If I am just getting on to spin and want to keep up the good cadence I find listening to some live Grateful Dead is awesome. The perpetually up beat jams of “Sugar Magnolia” and “Scarlet Begonias” keep your legs turning for hours on end. All you need is one song and your workout could be half way over! On the other hand, for intervals you need something a little more up tempo. I listen to tunes such as “Bohemian Like You” from the Dandy Warhols, “I Believe in a Thing Called Love” by The Darkness, and “Can’t Stop” from the Chili Peppers. Sometimes though, it takes a little extra motivation to get your ride on during those dreary windy months. If my mind says I should ride but my body doesn’t want to I just listen to “Rock and Roll Ain’t Noise Pollution” by AC/DC. The song starts slow and then builds until I can’t keep myself off the bike. Check it out.

PS: Check out the pic of my buddy Jonathan Mason from the US Naval Academy Cycling Team. That is hardcore winter training…

I try to shake things up to fight the monotony so a little jazz (#3, #8), a little hypnotic African thumb piano (#10) and a sprinkle of 80’s hardcore (#6) keeps things interesting…for now.

Thanks for all that is great on Pez!

Chris Fontecchio – Seattle
Hey Dave — I’ve spent a few evenings in a dark warehouse with
teammates at a Computrainer co-training site, with Kraftwerk’s Tour
de France on the headset. Almost too obvious, but damn, it keeps the
legs turning. When it gets too subtle, it’s on to People Under the
Stairs.

• Well done to those who answered the call, and let’s keep it going. Send in your music suggestions to [email protected] and share the wealth. Maybe you’ll find something new to spin to!

Thanks to you PEZ -Fans out there, we appreciate the love.
– Dave