Ear Candy: To Your Trainers!

Oh my. Oh my. Oh my. That’s pretty much what I say each morning in this frigid December here in the Midwest. It’s been a lot colder than recent years and we’ve also been dealt more snow cards this December than the last few years combined. Lots of the white stuff lays in the streets, making riding a messy, gooey, yucky pile of “I want to go home”.

And home we go. You, me, the pros, the beginners, they’re all home. On their trainers. Well, some of them are still out there running and gunning (I’m talkin’ to you, Raisin), but most of us opt for the shorts, shoes and shirt and hit the TV and the trainer rather than bundle for a half an hour to ride for two.

It’s that time of year PEZ fans, time for Ear Candy. I want to know what you’re listening to, as do the rest of us miscreants roaming aund the PEZ office, so do tell. Drop me a line at [email protected] and tell me what’s in your ears and keeping you sane as you while away the hours on your trainer. 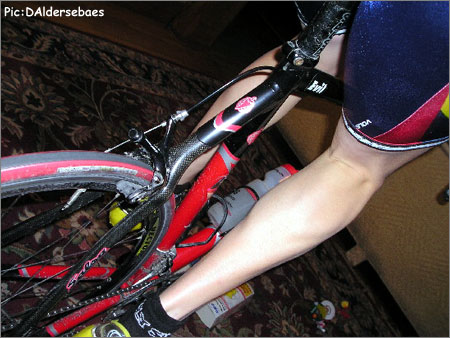 Let’s have a look around the room and see who’s listening to what these days. Read it. Then write me. I’ll get us started.

Dave Aldersebaes – Project 5 Racing/Swanson
I’m into all kinds of stuff these days. Some weird, some not so weird. For the low intesity stuff, I’ve been spinning the new Coldplay record and the new one from Sigur Ros. That’s good stuff if you have lots to think about. I’ve rocked some Falco (may he rest in peace…I think) yes, some Falco, and the new Slipknot live album is fun. Deftones always work good. Some old Living Colour has made it’s way in to the interval part of training. I dare you to sprint to “Funny Vibe” off the Vivid album anytime. 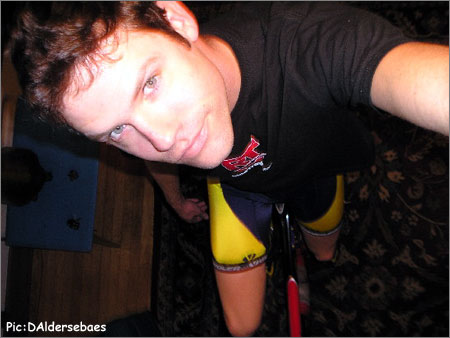 Music, lots and lots of music, gets Dave A. through the winter.

For other oldies, I’ve spun to “Zenyatta Mondatta” by the Police, and for some reason, Frank Zappa’s “Joe’s Garage” which, with it’s contiunual tempo changes and musical schizophrenia, is super hard to keep a beat to. It’s better just to pick a tempo and sit in awe as Frank whips up those tasty tonal tidbits. Ah, Zappa. And the Simpsons or bike racing is on TV just to keep the eyes in a certain direction. I heard a great Homer quote the other day “Ah, the Luftwaffe. The Washington Generals of the history channel.” – priceless.

Saul Raisin – Credit Agricole
I just ride in the bad weather. If I ride the trainer I’ll do like 5 hours and watch movies. My record is 5h3Omin with an average heart rate over 130 and 200 Average watts. 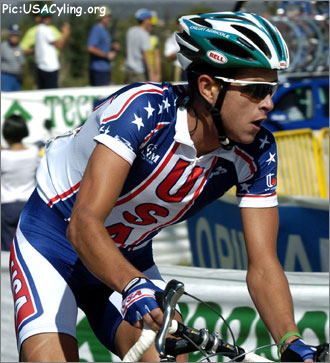 No need for music, Saul rides outside.

I like the new James Blunt CD, old school rap and Snoop Dogg, anything goes… 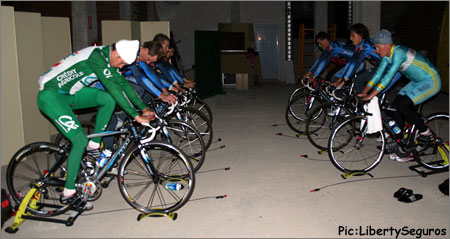 Even ProTour teams get confined to trainers at times: check out Liberty Seguros at their recent team get-together – complete with Alexandre Vinokourov and Andrey Kaschechkin (formerly Credit Agricole).

Erik Saunders
I will be doing Bootsy Collins repeats. The first five tracks of “Live in Louisville 1978” all run together seamlessly. You can jam out for a full fifteen minutes uninterrupted. I can ride outdoors though, and i dont listen to anything, so I don’t get killed [ed. Probably smart]. I play myself some Bootsy as a reward for a good ride. 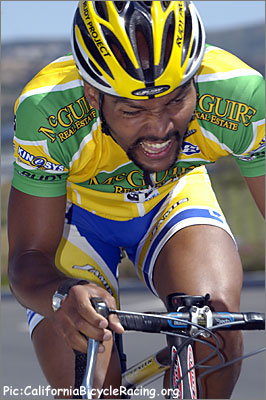 You won’t catch E-Rok on the roads blastin tunes.

Christian Vande Velde – Team CSC
Paid The Cost To Be The Boss. I like some James Brown right now, because my tan is fading. I also like Kanye West’s new one – Late Registration. I’ve been late to get on the Coldplay bandwagon, so I’ve been listening to that and then some Blackened to wake myself out of depression afterwards. 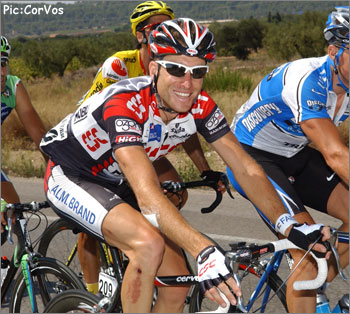 Paid The Cost To Be The Boss – it’s classic, and it’s bumpin in VDV’s ears. 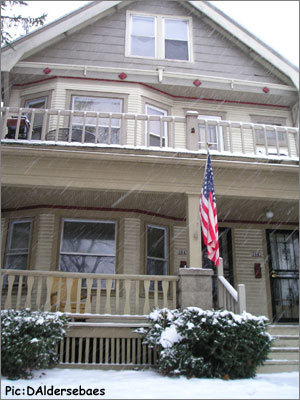 Have mercy, make it stop.

I’ve been running a little more than riding, but that’s likely to change since it’s fu*&ing cold as sh*t! I still do lots of yoga – at least 2 classes a week and almost everyday at home. 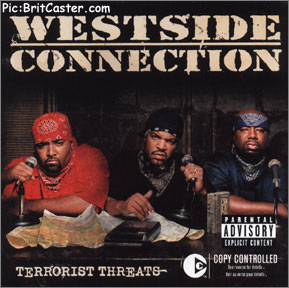 Ah, that Dave. Always a man of few words.