With all of cycling’s eyes on France this time of year we thought it only right to pay a some homage. Here’s a summery, quick, cheap and easy version of everyone’s newest favorite French dish: Ratatouille – done on the grill.

If there is any cuisine that home cooks tend to automatically lump into the “difficult to conquer and unapproachable” category, it is French. French inspired recipes are often technically labor intensive, can call for difficult to source ingredients, and require impeccable attention to detail. But if there are two things that can make a dish utterly user friendly, whether you be an American bike rider or otherwise, they are a Parisian cartoon rat and a BBQ. 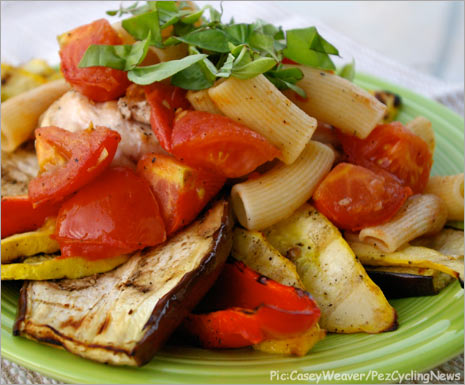 Ratatouille is a special dish, along the lines of risotto in Italy or gumbo in the South – it’s got a lot of culture behind it. As defined by wikipedia, it’s a traditional French Provenзal stewed vegetable dish, originating in Nice, though with so many variations and interpretations by just about every cook in the French country side, there is really no right or wrong way to prepare it. So I’ll take the liberty to use whatever seasonal vegetables are appropriate, and have no shame in cooking them on the grill as opposed to sautйing them into a stew-like consistency.

Traditionally the dish includes tomatoes, bell pepper, eggplant, zucchini, and an array of fresh herbs, though if you are at the market and Sun Burst squash looks good, grab it to use in place of yellow squash or zucchini. At the end of the day they are both low calorie nutrient-rich vegetables. And for the sake of making this a “one pot meal” I build it all around a grilled chicken breast. 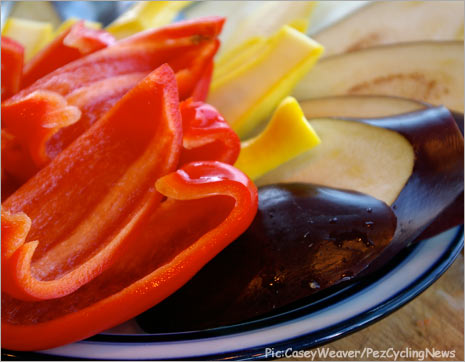 Before you start anything, make sure to prep your grill. As we have talked about in the past, there are distinct advantages to using one type of grill over another. A gas grill is generally quicker, gives you more control over heat, and is cleaner burning, which means any food cooked over its flame is imparted with fewer carcinogenic free radicals. A charcoal grill on the other hand, in my opinion, makes the food taste better. The choice is yours. 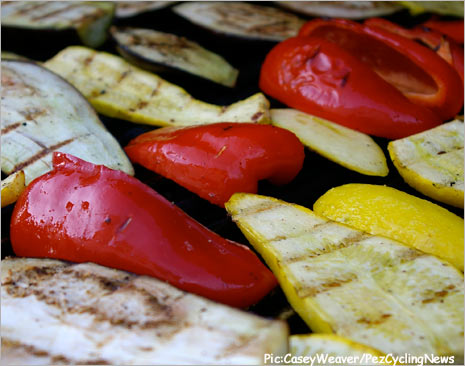 In a large mixing bowl, combine the sliced eggplant, squash, onion, and bell pepper. Drizzle them with about two tablespoons of olive oil and sprinkle generously with salt and pepper. Stir the veggies to evenly coat them with the olive oil, salt, and pepper (Note: if you do not have a large enough bowl it may be best to do this in more than one batch. You can also lay the sliced veggies out on a baking sheet and brush them with the oil and sprinkle them with salt and pepper, though this will take a bit more time.). 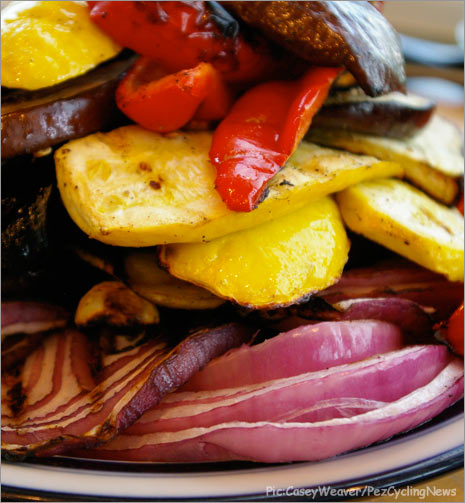 Bring a salted pot of water to a boil for the pasta.

In the mean time, heat a tablespoon of olive oil in large heavy skillet over medium heat. Add the garlic and cook about two minutes, stirring often. Add the tomatoes, season with salt and pepper, and continue to cook, stirring often, until they are soft but not totally mushy, about ten minutes. 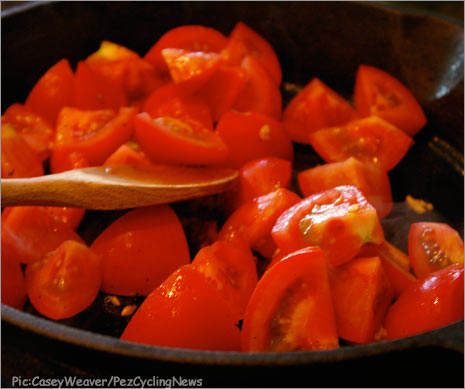 The pasta and the chicken should take about the same amount of time to cook, so when you add the pasta to the boiling water, place the chicken on the grill and season with salt and pepper. Cook the chicken through, about eight minutes per side. Once cooked, set aside and cover to keep warm.

Once the pasta is done (if there is anything bike racers should not need instruction on cooking, it is pasta), drain and rinse under cool water.

Add the cooked pasta to the tomatoes and stir to combine.

To serve, layer the grilled veggies in a circular fashion on a large plate. Place a grilled chicken breast in the center and top with the tomato-pasta combination. Top with your desired amount of fresh herbs and grated Parmesan cheese if desired. 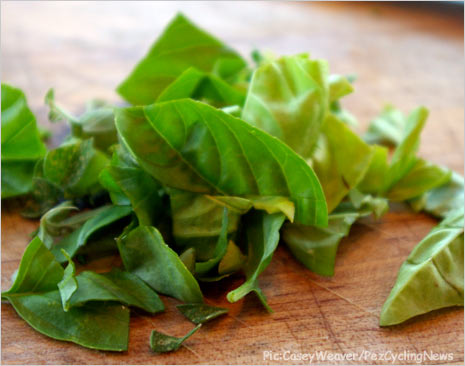 This dish embodies more than just the hopes and dreams of a cartoon rat in a Disney movie. It’s implications of cultural history are as great as the Tour itself, and in my mind, with an abundance of seasonal vegetables and fresh herbs, indicates summer in France just as much as when the first rider rolls down the start ramp each July. Vive Le Tour.

• Casey grew up in the kitchen inspired by his mom and grandmother, who ran the catering and cooking instruction company, Cooking in the Canyon, in Brentwood, Ca. He is the creator of the website CulinaryCompetitor.com a recipe resource for athletes who love good food. He received his Bachelors Degree in Communication Studies from UCLA, currently races for the NOW-MS elite amateur cycling team.