The salty air of the Mediterranean Sea hits you long before its azure blue comes into view. And while the ProTour boys continue their race to the sun, it’s unlikely they’re enjoying the kind of cuisine southern France is best known for. But there’s no better way to celebrate “The Race to the Sun” than with a light, bright, and lean seafood stew. So grab your mussels, clams, and Provencal herbs and get to it. 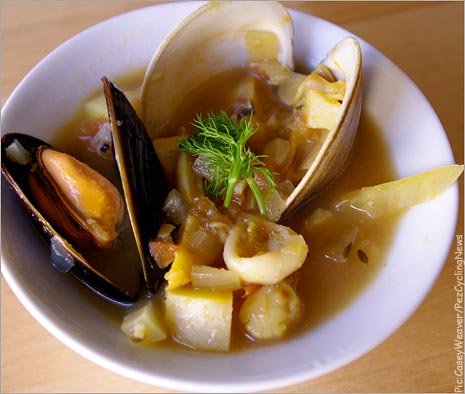 My first pass at this dish could not have been any more “Culinary Competitor.” That was not at all for its combination of ingredients, the way it was prepared, or because it was particularly “good for the athlete”. It was because it started with a vague semblance of direction – inspired by Bouillabaisse, a regional seafood stew found in and around Nice, France. It ended with subtle nods of approval from a table full of eaters in a Central Coast beach house smattered with too many bikes, surfboards, bottles of beer and wine, and an old dog. In between was a failed trip to a small-town grocery store and rushed preparation – we had get in an (insanely beautiful) ride, then make it to the winery before the tasting room closed. But the stew was completed in well under forty-five minutes, wine was tasted, and wisecracks were at no shortage.

When I come across a recipe from a notoriously complicated cuisine (ahem, French), the first thing I do is run through the ingredient list and knock off any non-essentials. Bouillabaisse recipes often call for whole lobsters and crabs, Mediterranean fish, specific types of shellfish… you get the point. Though fancy ingredients can add something to a dish, for the vast majority of us that live in the real world, buy food on a budget, and are feeding at least a couple people, the benefit is not likely to outweigh the cost. 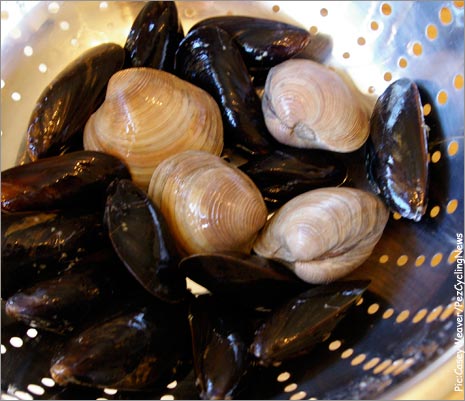 Instead of going big and breaking the bank with expensive ingredients, I find the perfect compromise to be a bag of frozen mixed seafood (they have a great option for this at Trader Joes, if you happen to have one close by). If you can’t find a satisfactory selection of mixed seafood, a total of one pound of any shrimp, scallops, and calamari is all you need. Add to that some white fish, some shellfish for a bit more flavor and aesthetic flare, and you’re golden. 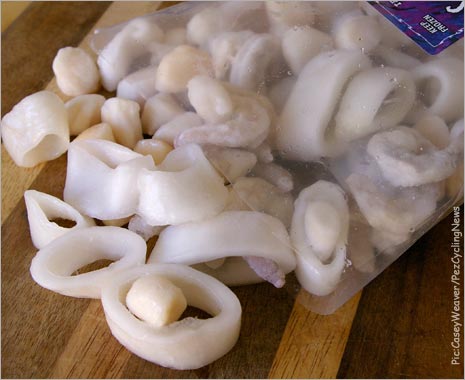 On my first pass of the recipe, all that was on offer at that particularly small and under-stocked grocery store was frozen Tilapia, shrimp, and a box full of whole, frozen squid that could have very well been taken out on the local day boat and used as bait. And at the end of the day, even with what seemed at the time a dismal selection, the final product tasted great (for the record, I did make the stew again with ingredients of my choosing). 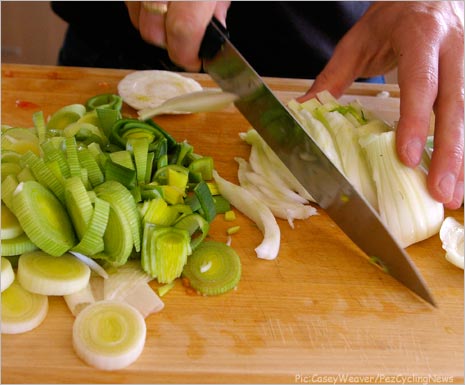 For the Stew
Heat the olive oil in a large Dutch oven over medium heat. Add the onion, fennel, and garlic, and sautй for about five minutes, stirring often. Add the diced tomato and cook for about three to five minutes more. Squeeze in the lemon juice and add the saffron, fresh herbs, and bay leaf (note: it’s best to tie the herbs into a bouquet with kitchen twine, this way the stems can be easily removed after cooking). Cook for two to three minutes, then add the vegetable broth and potatoes. Bring the broth to a boil, reduce to a low simmer, and cook until the potatoes are soft but not mushy – about ten or so minutes. 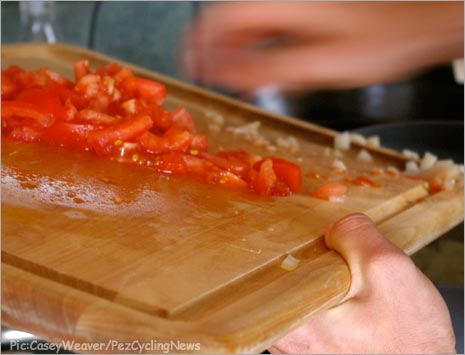 Add any particularly large pieces of fish and the clams, return the stew to a boil, cover and cook about two minutes. Add the mussels, remaining fish, and other seafood, bring to a boil, and cook just until the seafood is done and the mussels and clams are wide open – about five minutes. Discard any shellfish that has not opened up. 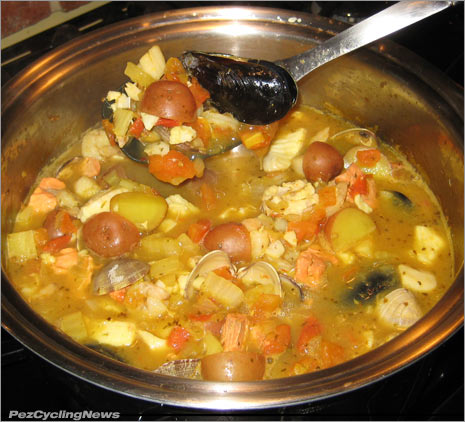 PEZ SEZ: Mrs. Pez and I made this stew a couple nights ago – and it was great. We used a mix of fresh and frozen seafood, but will only use fresh next time for the best tastes. We were also short on herbs, so be sure to get lots – they really add to the flavour.

Remove the herb stems from the soup. Serve each bowl topped with a few fennel leaves and with a few slices of a fresh baguette.

With the start of the cycling season also comes a change in the calendar season. The days are starting to feel more like spring and the dark winter months are almost in the view of one of those awesome helmet-mounted mirrors. It’s time to get out of your hearty winter rut and open the door to new flavor.

About The Author:
Casey is the creator of CulinaryCompetitor.com, a website that provides healthy recipes for athletes who love good food. He grew up in the kitchen inspired by his mom and grandmother, who ran the catering and cooking instruction company, Cooking in the Canyon, in Brentwood, Ca. He received his undergraduate degree in Communication Studies from UCLA, currently races for the NOW-MS elite amateur cycling team.