I say there are few foods more Californian than, err, Mexican food, and with the right recipe and ingredients, you can kick that “grease soaking through the bag” mental image of takeout Mexican food. This month’s offerings are simple, healthy, appropriate for the training cyclist, and mucho tasty…

As the Tour of California approaches with the speed of a peloton bringing in a failed escape in the first week of a grand tour, I thought it only appropriate to set our gaze out west to see what foods the Golden State has to offer. Most athletes seem to unanimously agree that there is a time and a place for Mexican food, though it is after a race when they are letting go of all reservation. But this does not have to be the case, as I’m about to show you… 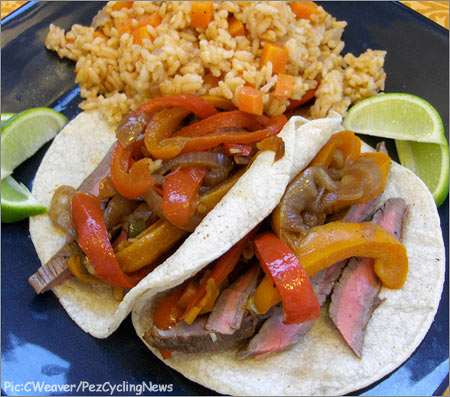 In terms of order of preparation for this dish, I like to get the rice going first, then make the guac, then do the fajitas since they cook relatively quickly and are best served sizzling. 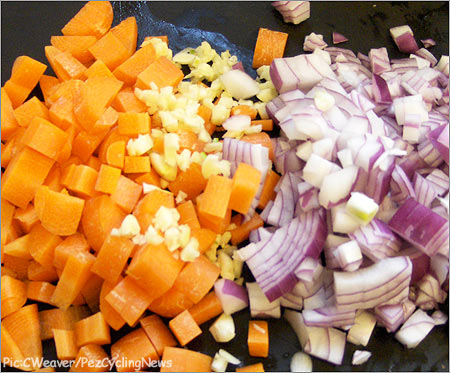 Sautй the onions, garlic, and carrots in one tablespoon of olive oil over medium heat until the onions are soft, about five minutes; season with salt and pepper. Add the uncooked rice and stir to combine, then add the tomato sauce and stir so it is evenly distributed. Transfer the rice mixture to a medium saucepan or rice cooker and add the chicken stock. Bring to a simmer over low heat, cover and cook until liquid is absorbed, about fifteen to twenty minutes. If you are a fan of fresh cilantro, once cooked, stir in a half cup. 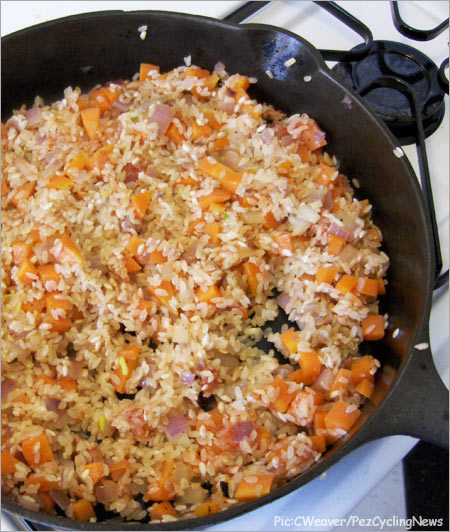 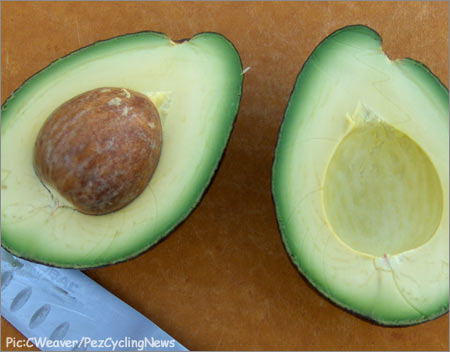 On the culinary end of things, avocados are right up there with artichokes and triple wheatgrass macchiatos in terms of foods that Californians like to consider their own. Nutritionally speaking, avocados do have a bit of a stigma to their name, so let’s get this out there straight away: they do contain a fair amount of fat. But it is not the same fat found in heavy cuts of red meat or bacon. Avocados contain mostly mono and polyunsaturated fats, glamorized by the media under the label of “good fats,” and only a negligible amount of cholesterol. There is no doubt that these fats are better than others, and are even essential to the human diet, but they are still fats and contain proportionately more calories than carbohydrates and protein. That being said, do not let this dissuade you from enjoying this fleshy fruit from time to time. In moderation, the benefits far outweigh the costs. 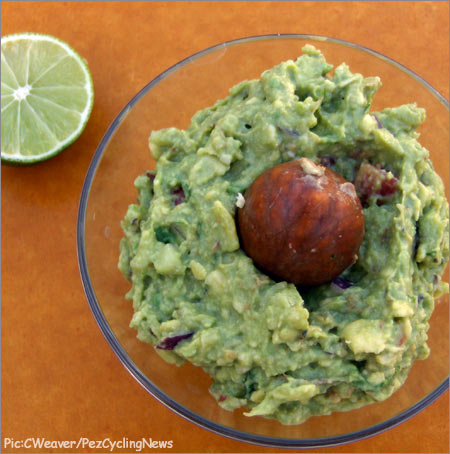 To make the guac, halve the avocados, remove seeds, and place the flesh in a large bowl. Coarsely mash, then add the minced garlic, red onion, and squeeze in the lime juice (By piercing the halved lime with a fork, squeezing, and twisting, you will be able to get as much juice out as possible). Stir in the onion, garlic, and lime juice, then season the mix with salt and pepper to taste.

To spice it up and make things a bit more exciting, try adding some quartered grape tomatoes (which I did), some chopped fresh cilantro (which I also did), or some seeded and diced jalapeno.

Fajitas
I usually choose to use flank steak over skirt steak when making fajitas because it tends to be a bit leaner. You can also use skirt steak (some people will say you can ONLY use skirt steak), but the choice is up to you.

For the marinade, place the steak in a baking dish or large plastic bag and combine all ingredients and season liberally with salt and pepper. Let marinate for at least one hour, and up to one day. Because flank steak is a fairly tough cut, allowing it to marinate in the acidic citrus juices will naturally tenderize the meat. 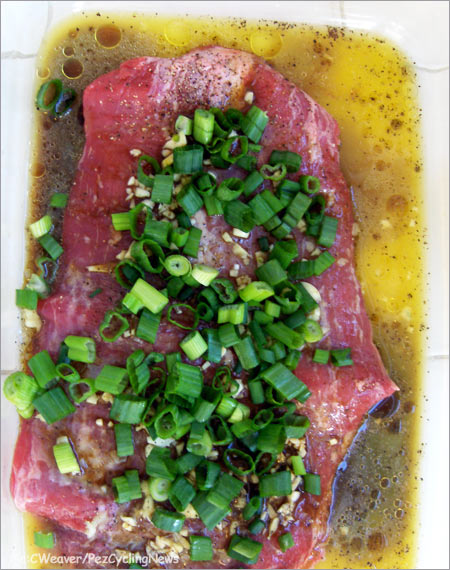 Heat two tablespoons of olive oil in a large skillet over medium-high heat. Add the sliced onions and bell pepper (and jalapeсo if you so choose) and season with salt and pepper. Cook until the onions are soft, but not completely broken down and mushy, stirring often, about eight minutes or so. Once cooked, remove from heat and set aside. 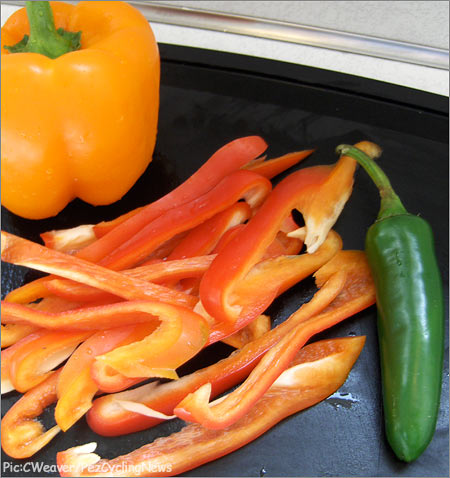 Because the addition of dried spices in fajitas is usually nonexistent, this is where having a well-seasoned cast-iron skillet really pays off. It allows you to make dishes that call for nothing more than salt and pepper, and impart a world of flavor unto the food that will leave your eaters wowed. 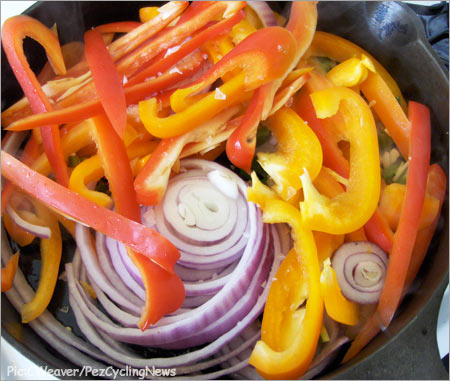 Side note: Wanna know what it feels like to get maced?
Rub your eyes after handling hot peppers like jalapeсo. Always wash your hands when cooking with peppers and try not to use the restroom (or touch down there). Personally it seems that every time I start cutting a pepper, I remember that I’ve had to use the bathroom for the last hour and a half. Also, try not to leave peppers unattended over heat or you will turn your kitchen into a reenactment of the LA riots fifteen minutes after the cops showed up. Trust me, I’ve kicked up pepper fumes so harsh that even my dog starts hacking.

Once cooked, remove the steak from the heat and set aside to rest for about five minutes.

To heat the tortillas, you can wrap them in aluminum foil and place in the oven at 350 degrees for about ten minutes. If you want to be authentic about it, just drop each tortilla on a hot skillet for about thirty seconds per side. Wrap in a clean dishtowel to keep warm.

About The Author:
Casey grew up in the kitchen inspired by his mom and grandmother, who ran the catering and cooking instruction company, Cooking in the Canyon, in Brentwood, Ca. He is the creator of the website CulinaryCompetitor.com, a recipe resource for athletes who love good food. He received his undergraduate degree in Communication Studies from UCLA, currently races for the NOW-MS elite amateur cycling team, and coaches endurance athletes with Velo-Fit, llc.
• Contact Casey at [email protected].

PEZ Previews: Stage 1 Of The Tour Of California!