PEZ-Fans can not live on a diet of cycling alone, which is why we toss in enriching content when the time is right – like this lazy Friday in August. Why just live life when you can really enjoy it – and why treat your taste buds like used car floor mats? Tastey food that fuels the ride is the way to go, so here’s an easy recipe you can do yourself…

– By Casey Weaver –
Just because you are eating to compete does not mean you have to sacrifice flavor. Trust me, I like pasta and jarred marinara sauce as much as the next guy, but as a cyclist who begins his racing season as early as February, and is likely to carry on well into September, there are only so many times I can do pasta and red sauce, and only so many ways to alter, add to, or adulterate those two main ingredients to try and make a pre-race meal exciting and stomachable. 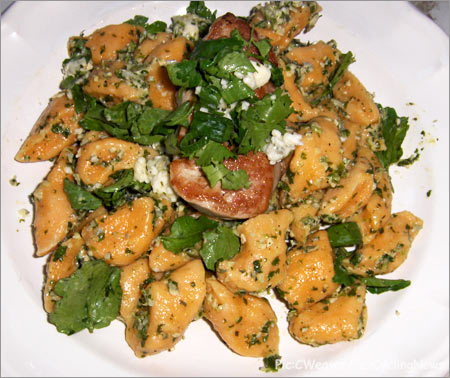 That being said, there is no limit to number of foods that can provide you with the macronutrients you need to optimally fuel your body the night and/or week before your event, so long as you include appropriate proportions of carbohydrate, protein, and fat. Despite the fact that you deviated from the tried and true, as you sit at the start line waiting for the whistle, your cannons will still be ready to fire.

As a self-proclaimed foodie and avid competitor with an interest in sports nutrition, I embark on this journey to add a little flavor to your weekends, hoping to mitigate some of pain and suffering you will inevitably experience on the bike. Let’s face it, one of the greatest, sometimes overlooked, aspects of being an endurance athlete is the gift of eating two to three (or more) times as much as the average person. Don’t just waste those calories, make them worthwhile.

This is the first of an indefinite series of alternative pre-race meals countering the “eat to compete” philosophy that was built on a brittle foundation of spaghetti sticks and garlic bread years ago. It’s called “Eat to eat, compete to win: Not sacrificing flavor for performance.” As I am a chef and not a dietician, and am not legally allowed to give dietary advice, this is not dietary advice, just a compilation of good recipes that are good for you and suitable for any competitive athlete.

All of these meals will be quick, generally taking just under an hour. Trust me, if Rachael Ray did not have fifteen people slaving back stage, Thirty Minute Meals would be little more than a clever use of consonant sounds. I, just as much as anyone else know that when it’s time to eat, it’s time to eat, and do not want to be slaving away in the kitchen, wielding sharp knives while my nerves rage. Their quality arises not from laborious effort and precision technique, but rather the unequaled quality of seasonal ingredients.

Preparing a well thought out meal before your event is just one more way to ready yourself, both physically and mentally. It can be therapeutic and reassuring as this way you are conscious of everything that goes into your body, and how it will help you perform. Cycling is a lifestyle sport, so you might as well enjoy the lifestyle.

This dish is full of flavor, is full of color, and is good for you. I consider yams the wonder food of the endurance world due to their high carbohydrate content, and also their high vitamin content. As a general rule of thumb, bright colors in the grocery store (think yams, hearty greens, beets) mean mega nutrition points. I like the gorgonzola for its potency. It allows for a lot of flavor without creating a very cheesy, heavy dish. An acceptable shortcut for this dish is to buy already soft, canned yams. Or, if you really want to save time, buy sweet potato gnocchi.

• Gnocchi Dough (say: nyō-key)
2 Cups flour
1/2 teaspoon salt
One yam, average size (I opt for the more brightly colored yam in this dish, but use sweet potato in the title because for whatever reason people tend to be turned off by the word ‘yam’).
One egg
2 tablespoons extra virgin olive oil

To Start
Fill a medium sized saucepan with cold tap water. Wash the sweet potato. Cut off end bits, then cut into approximately two inch cubes. Place the cut pieces in the cold water and turn heat on high. Once the water starts to boil steadily, reduce heat slightly and let cook for about fifteen minutes, or until potatoes are very soft. 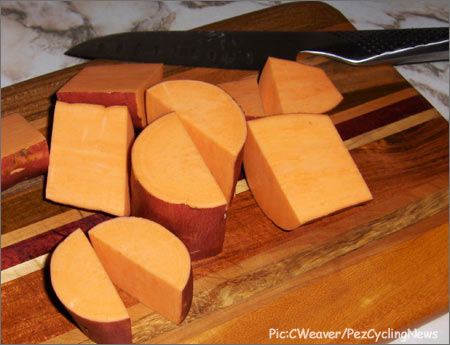 Place the cilantro, green onion, and garlic in food processor or blender. Measure in ј cup pumpkin seeds and three tablespoons of olive oil. Squeeze in the juice of one lemon. Season with ј teaspoon salt and ј teaspoon pepper. 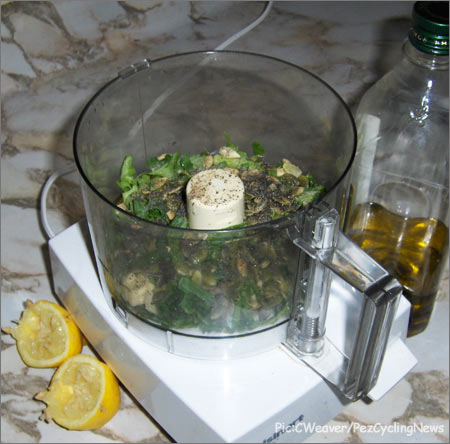 Blend the mixture until it is very fine, but not liquefied. Remove from processor and set aside. 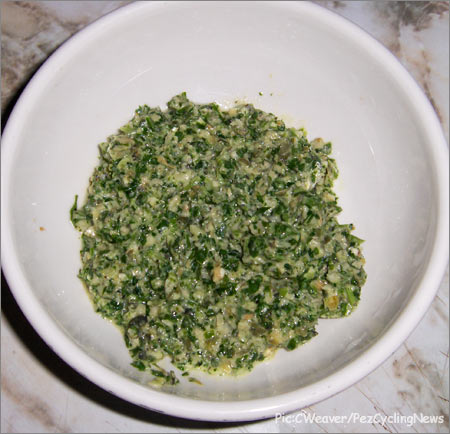 Check the sweet potatoes, they should be about done. Insert a fork into one of the cubes to check that it is very soft. Once soft, turn off heat and remove the potato from the water with a slotted spoon. Preserve the water for later. Rinse the potatoes under cool water and let stand until cooled enough to handle. Once cooled, peel away the skin. It should be easily removable.

For the Dough:
Mix two cups of flour and Ѕ teaspoon salt in a large mixing bowl. In a separate bowl, mash the potatoes well. Stir in one egg and two tablespoons olive oil, mixing well.

Add the wet ingredients to the dry. With (clean) hands mix the wet and dry ingredients and form into a dough, kneading to mix well. 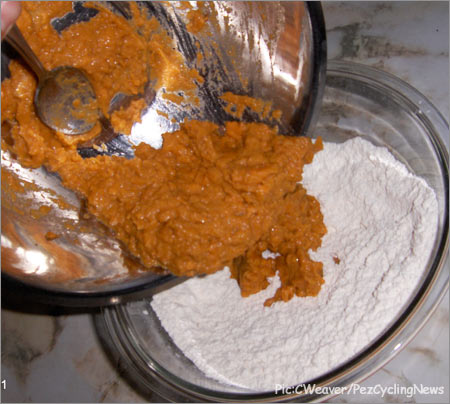 Pull off a small handful of dough at a time and roll into a rope about Ѕ inch in diameter. This is the perfect time to enlist the help of your children or younger siblings. If you are feeling fancy, score the tops of the ropes with a fork, if not, just cut into about ѕ inch pieces. 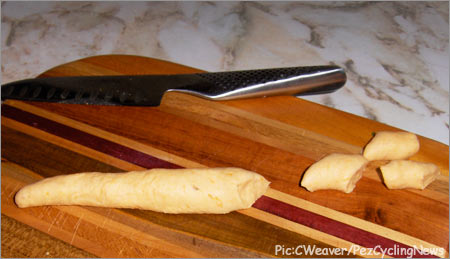 Return the water on the stove to a boil. In batches, cook the gnocchi for about 3-4 minutes, until they float. Add more water to sauce pan as needed.

For the Pork:
Pre-heat oven to 350 degrees. Remove visible fat and silver skin. Cut tenderloin crosswise into about four medallions. Press medallions with palm of hand to look like a filet mignon. Lightly coat with olive oil an oven-safe skillet, like cast iron, on the stove. Once very hot, drop the medallions onto the skillet, flat/cut side down, to sear. Season with salt and pepper. Let stand about 3-4 minutes, then flip and let stand for another 3-4 minutes. Remove from stove and place in heated oven for 10-12 minutes until cooked through. 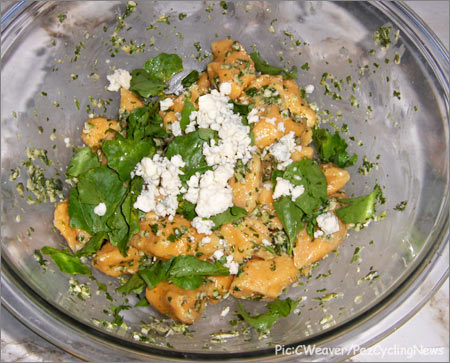 Mix extra 1/3 cup chopped cilantro and chopped green onion with 3 tablespoons gorgonzola. Place a cooked pork medallion on a bed of gnocchi and top with the cilantro-gorgonzola mixture.

About The Author:
Casey grew up in the kitchen inspired by his mom and grandmother, who ran the catering and cooking instruction company, Cooking in the Canyon, in Brentwood, Ca. He has worked as a private chef and currently works with the catering company Gourmet Solutions. He received his undergraduate degree in Communication Studies from UCLA, currently races for the NOW-MS elite amateur team, and coaches endurance athletes with Velo-Fit, llc. Contact Casey at [email protected].