Picture by Alex Whitehead/SWpix.com - 10/08/19 - Cycling - Women's Tour of Scotland - Stage 2: Glasgow to Perth - The peloton in action near Loch Earn.

By Edmond Hood On Aug 14, 2019
Share
Like PEZ? Why not subscribe to our weekly newsletter to receive updates and reminders on what's cool in road cycling?

Ed Roadside in Scotland: The different Tours of Scotland have played a part in the cycling life of PEZman Ed Hood, but there hasn’t been a ‘home’ race since the 80s for Ed to stand ‘roadside’. All change… Now the three stage 2019 Woman’s Tour of Scotland has hit the road for his, and many others, enjoyment. 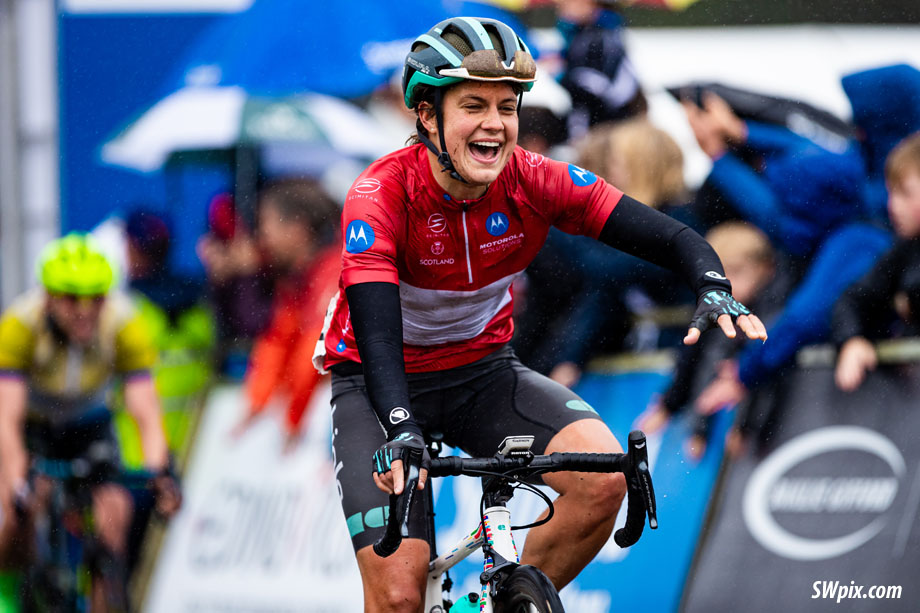 Back in the 1950’s through to the 80’s Scotland had a national tour, albeit in different incarnations including, ‘The Milk Race’ in the 70’s and ‘Health Race’ in the 80’s. It was 1971 when I started to get seriously into the bike and remember going to watch The Milk Race, won that year by hard as nails Welshman, John Clewarth who rode for Liverpool’s legendary Kirkby CC. 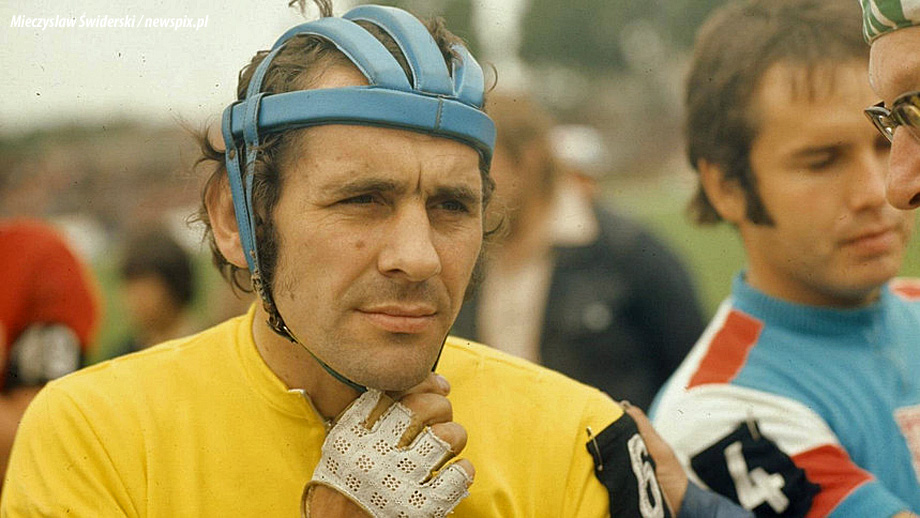 And on the subject of legends, the race fell twice – 1972 and ‘75 – to Ryszard Szurkowski of Poland who dominated world amateur cycling during that period, a champion of the world in the amateur road race and 100 kilometre team trial, as well as four times a Peace Race winner. 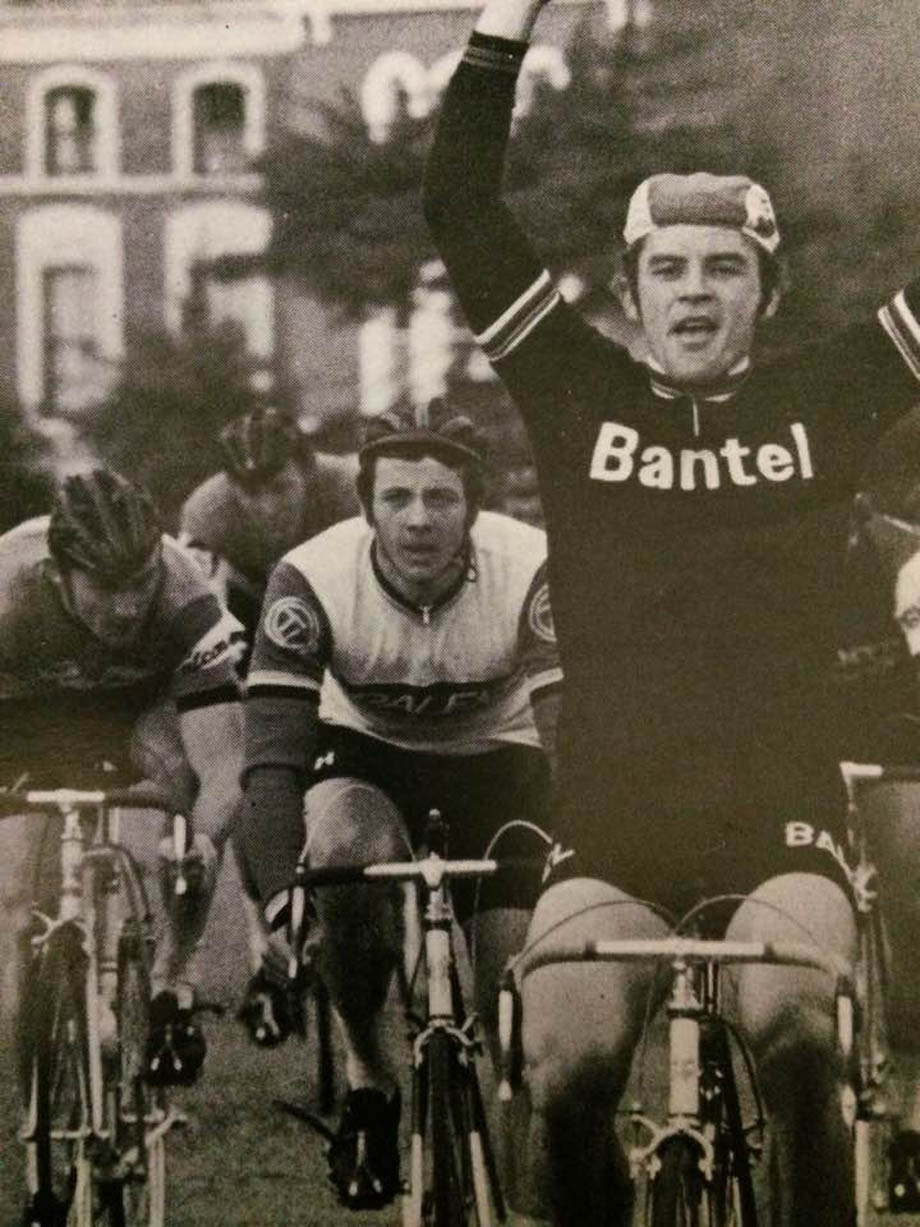 Then in 1977, Englishman Sid Barras – AKA ‘Super Sid’ a prolific winner on the UK pro scene – and his four time world professional pursuit champion Bantel team mate, Hugh Porter dominated the race. ‘H’ as they called Porter – stringing the peloton out into a long painful line for miles on end with Barras neatly tucked in and taking two sprint wins on his way to GC victory. 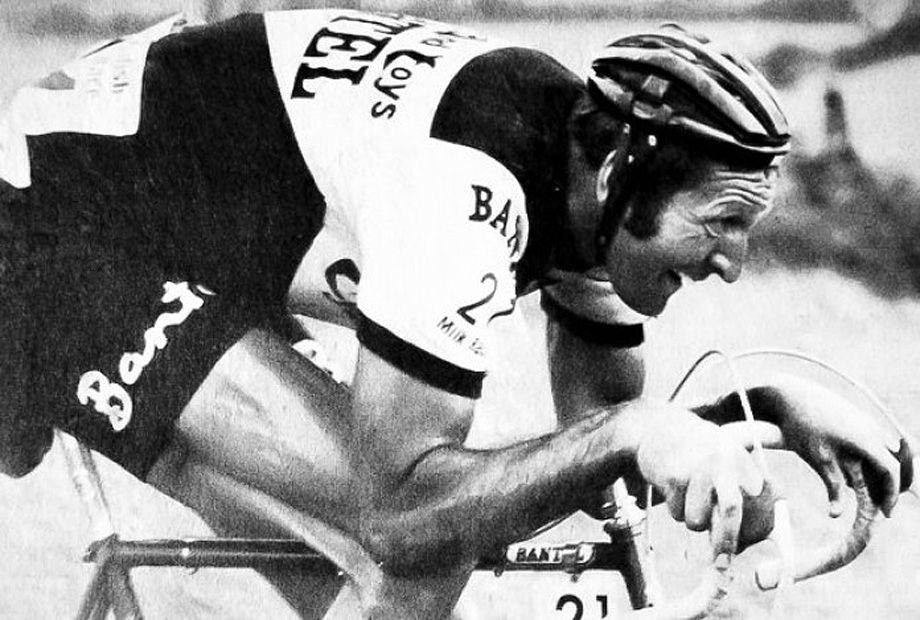 The last ‘Health Race’ fell to a Scot, Jamie McGahan in 1983 and lest you think it was perhaps a poor quality field, future Panasonic star, Het Volk and Amstel winner Teun Van Vliet took two stages in that race. 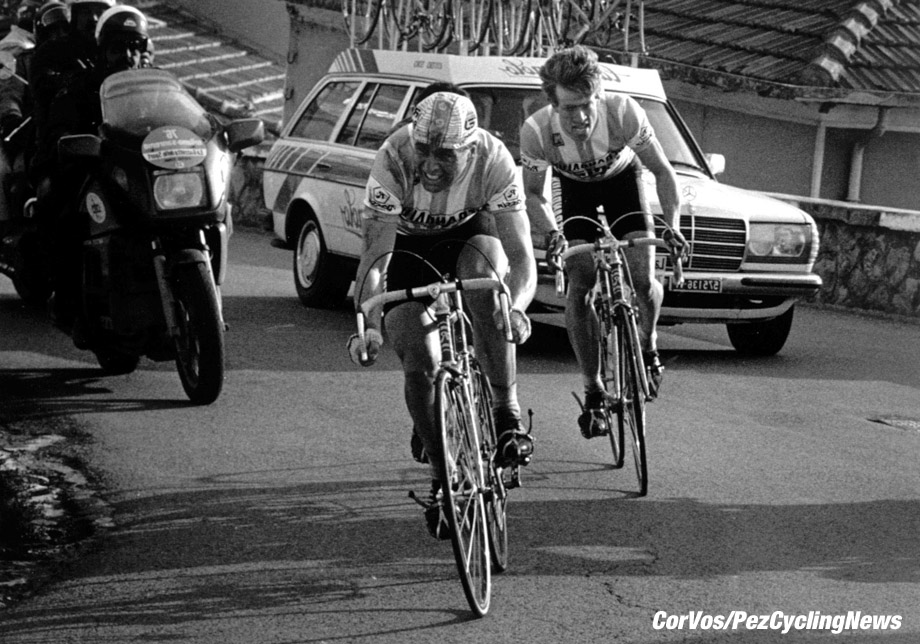 And we have a Tour of Scotland, again. But not for tough Kirkby guys or even harder East Europeans but for the ladies. ‘Tour of Central Scotland’ would perhaps be a better description with Stage One from Dundee up on the River Tay to Scotland’s ancient capital, Dunfermline in the Kingdom of Fife; Stage Two from the ‘Dear Green Place’ that is Glasgow to Perth and finally, Stage Three starting and finishing in the nation’s beautiful capital city of Edinburgh after describing a loop through the gnarly roads in the Scottish Borders.

Stage One:
We had positioned ourselves on the main climb of the day, the nasty ascent of Cleish Hill, 10 miles before the Dunfermline finish. 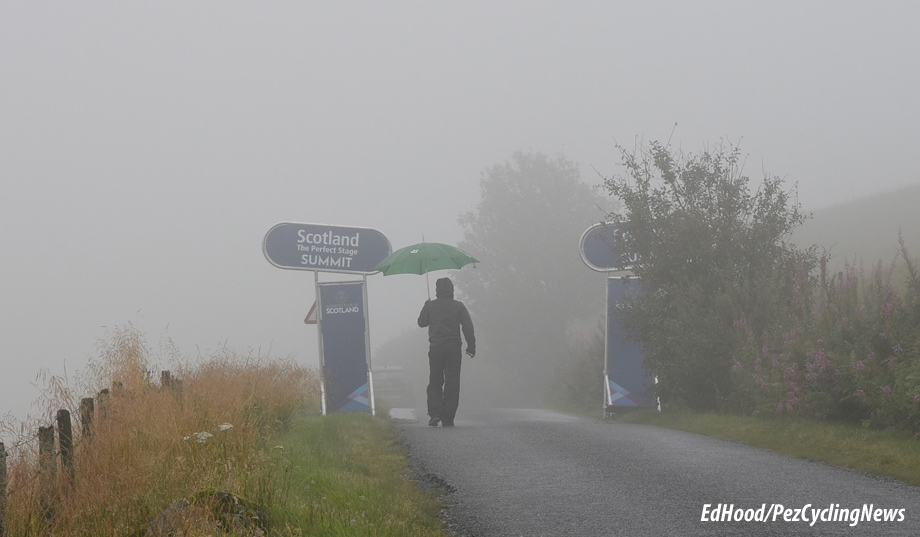 It was a savage day with driving rain, wind and widespread flooding – the race wasn’t spared and had to be abandoned due to flooded roads along the side of Loch Leven. It didn’t come as a big surprise and there was little to do but to head home. . . 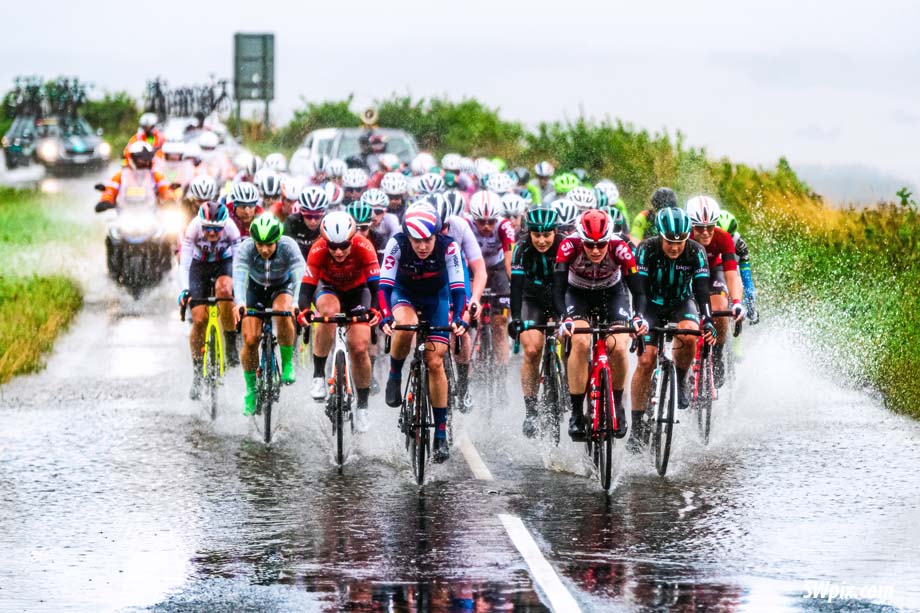 The roads were too wet to race

Stage Two:
We positioned ourselves on another hill for this one, the famous Duke’s Pass in the area known as The Trossachs, a region of mountains, lochs and stunning views – much loved by the English ‘Romantic’ poets of the 1800’s and Scottish bard, Sir Walter Scott. The Duke’s hosts the classic ‘Tour of the Trossachs’ time trial every autumn, won by all the great Scottish riders – Billy Bilsland, Robert Millar and Graeme Obree included. When that big rain squall ran across the hills not long before the race was scheduled to arrive we were rolling our eyes and thinking; ‘oh no, not again. . .’ 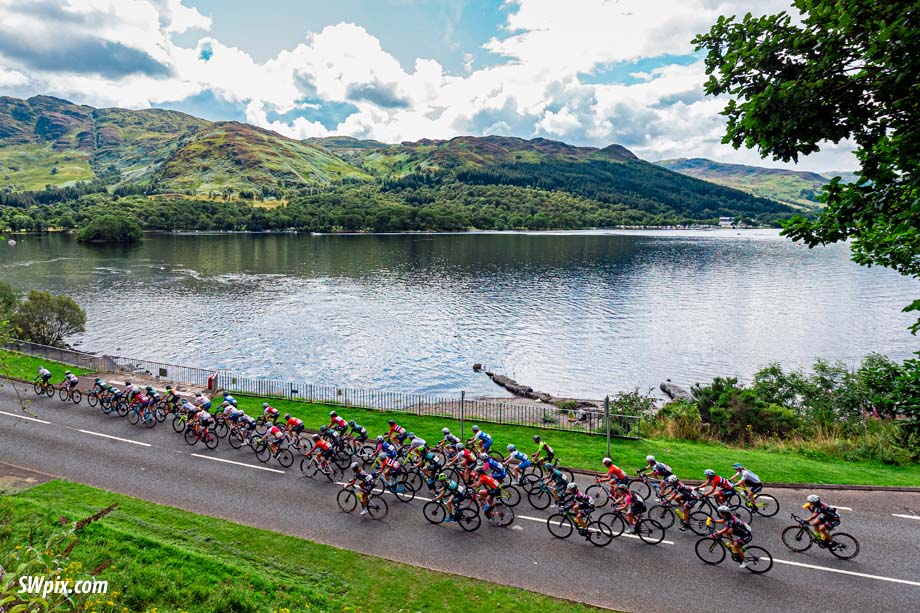 But the sky cleared, the sun came out and it was T-shirt weather albeit the tarmac was still damp. 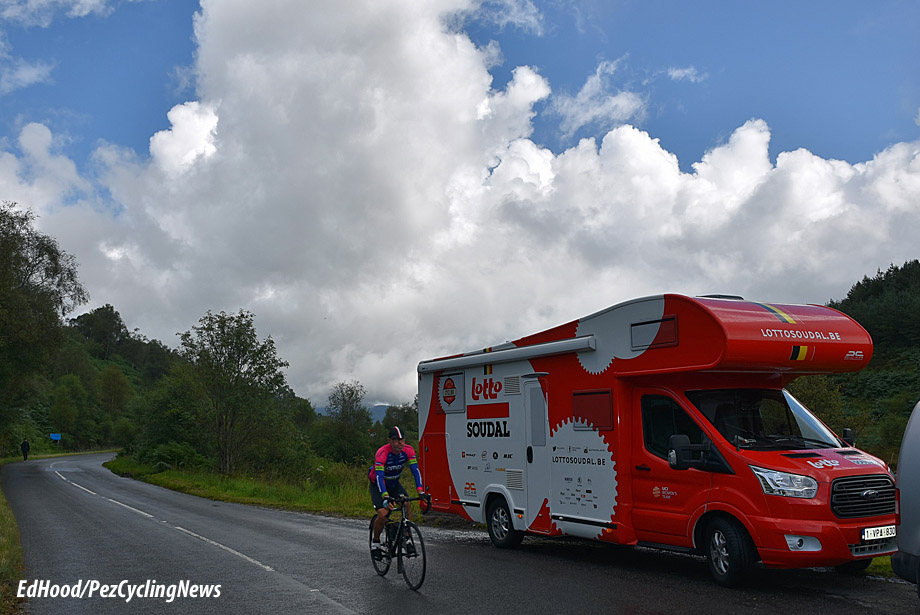 The Lotto van near the summit added a bit of glamour to proceedings. 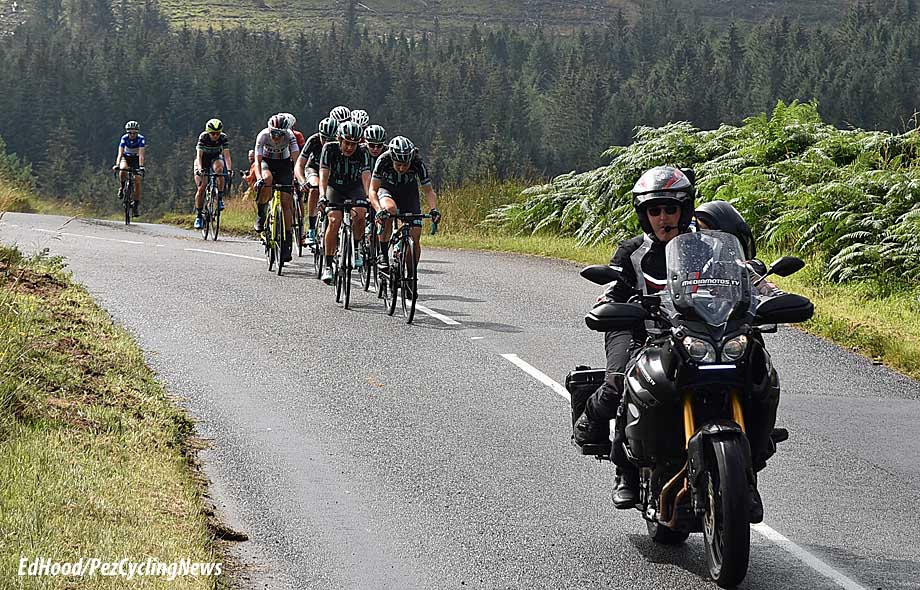 It was the Bigla girls driving the lead group up through the fern groves with the field split into a number of groups behind. 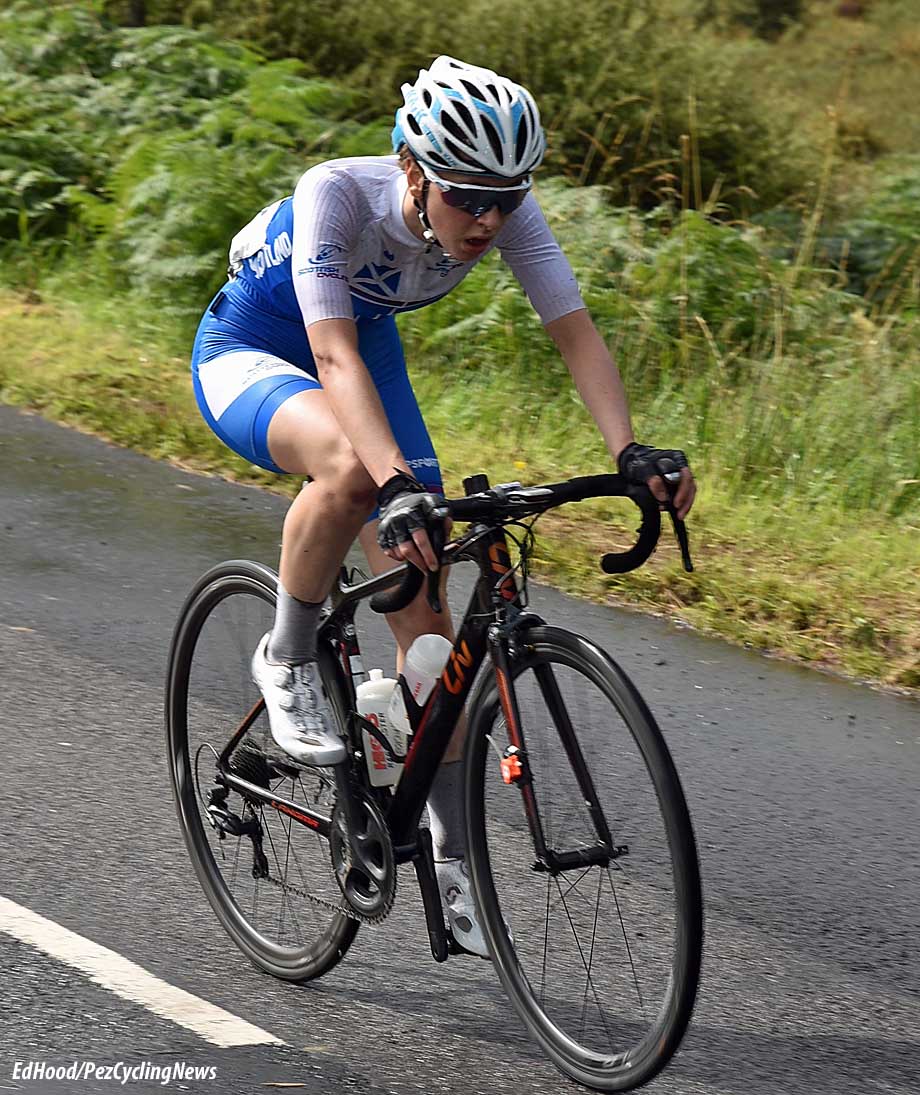 The first Scottish girl up was 19 year-old Anna Shackley, not so far off the lead group. 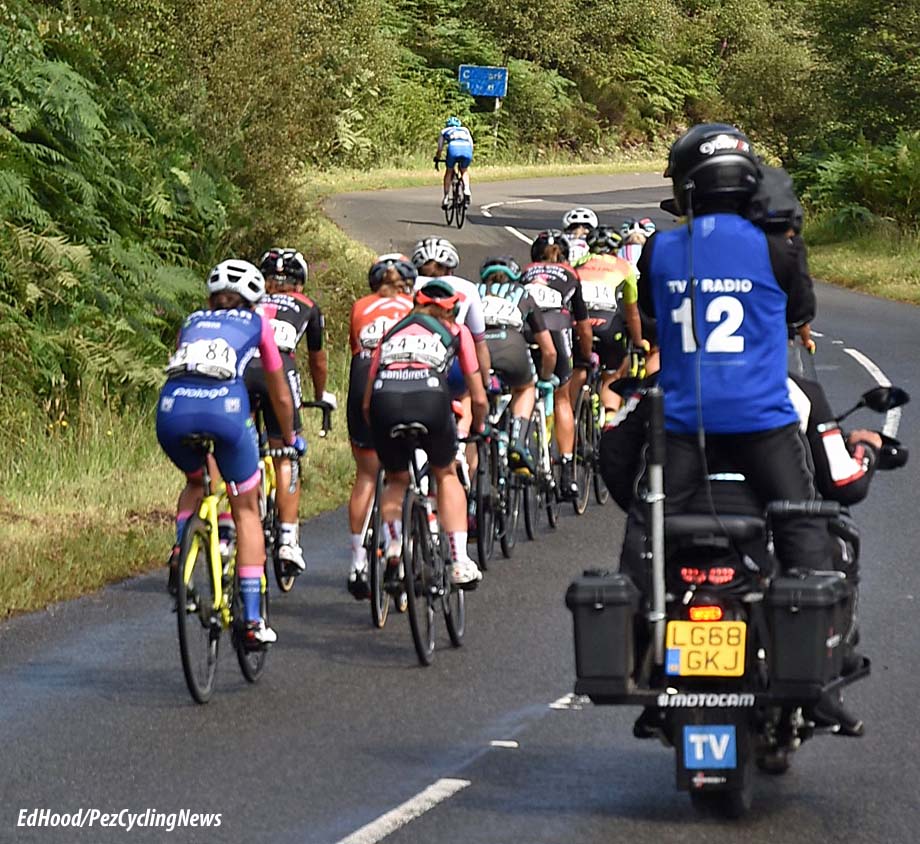 The race was well organised with rolling road closure, a fleet of motorbikes by the shoal and TV coverage. 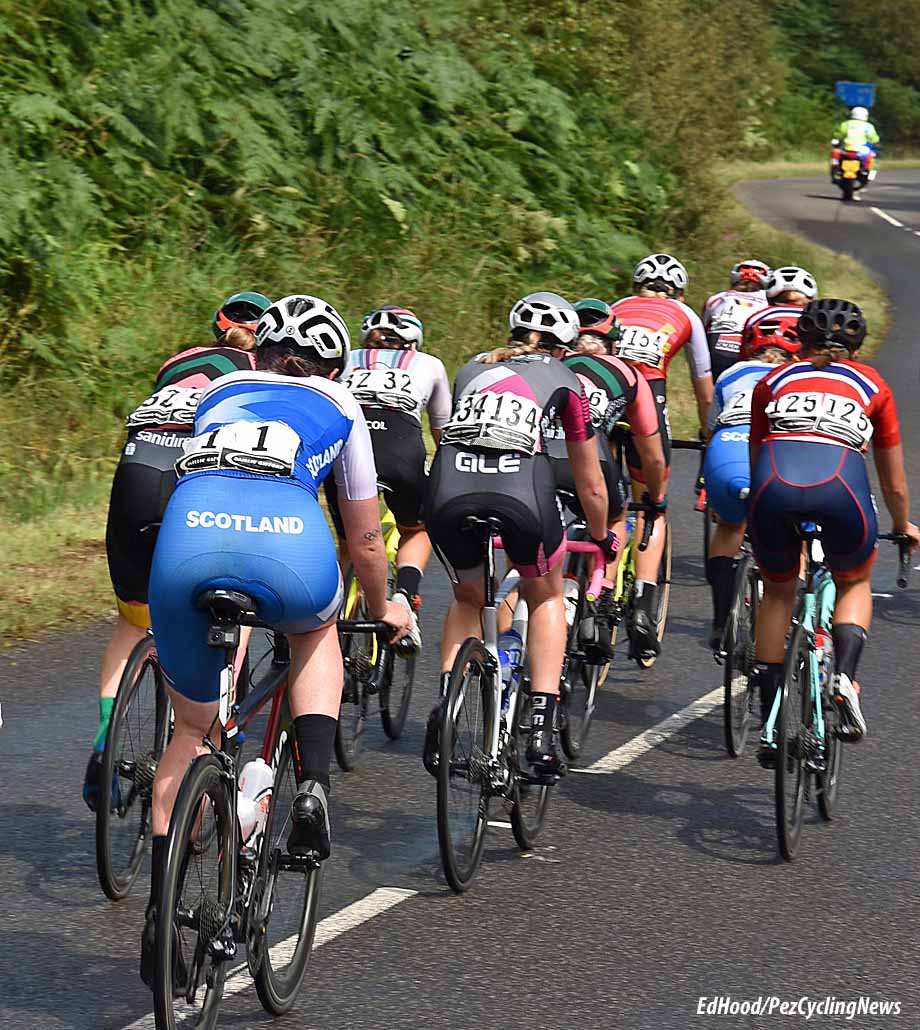 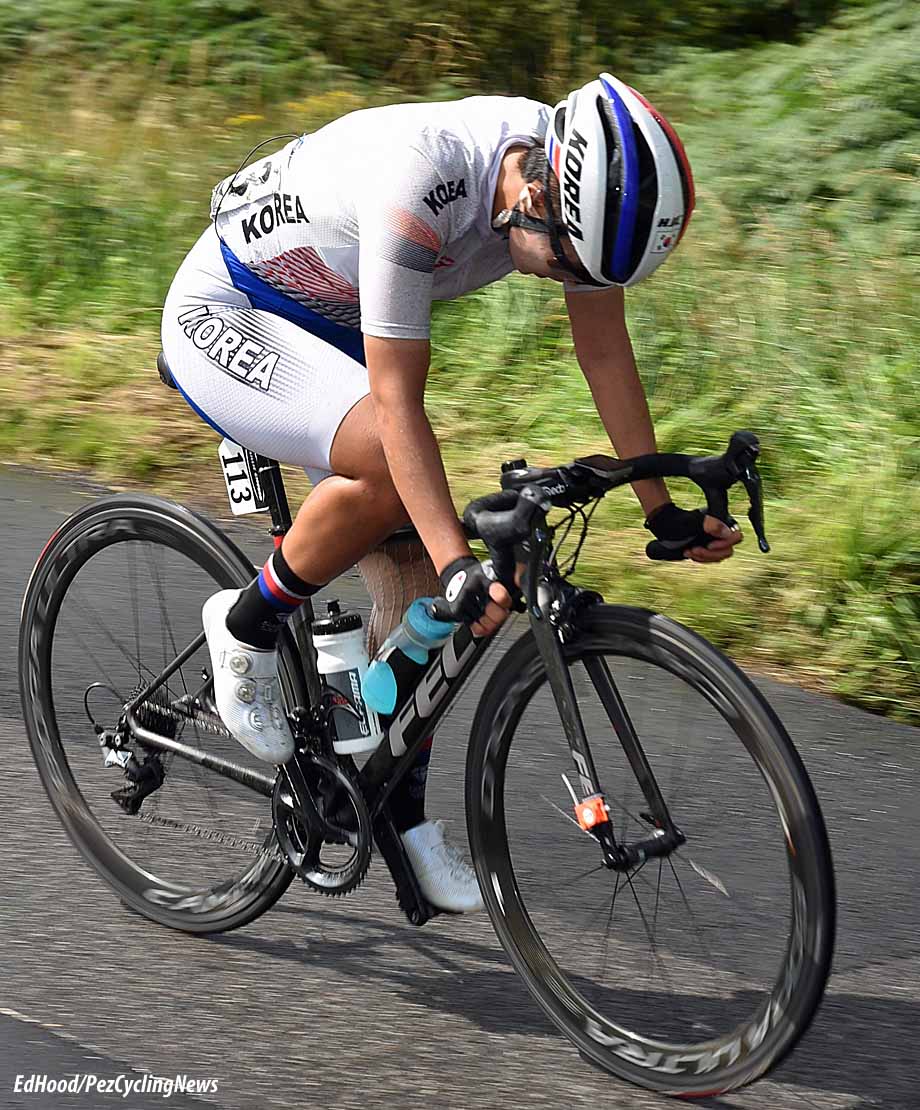 Scotland’s multi track champion, Katie Archibald carrying dossard number one wasn’t enjoying her day out in the hills and neither were the Korean team. 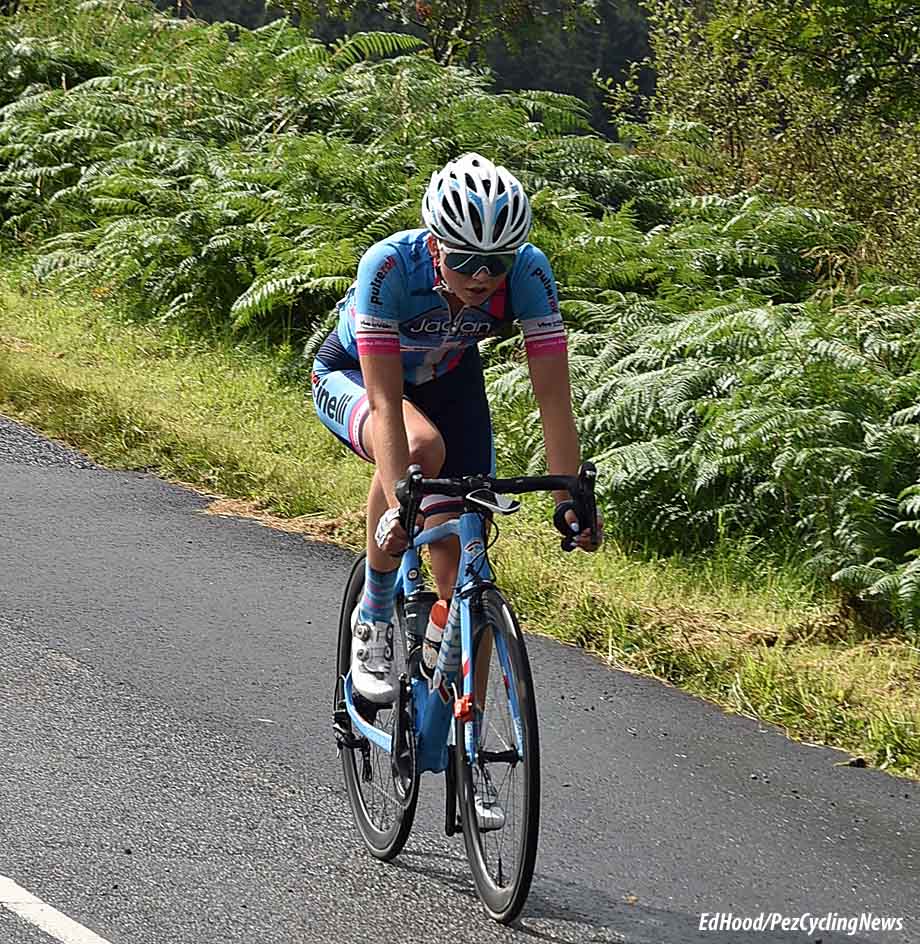 Last up was one of the Jadan Weldtite girls looking at a lonely run to Perth. Despite passing over The Duke’s well spit up, the various groups merged on the way to the Perth finish with Alison Jackson (Team TIBCO-SVB and Canada) taking the stage and the GC lead but with 44 riders covered by just three seconds it was still a wide open race. Best Scot was recently crowned Scottish Road race Champion, Jennifer George in 13th place.

Stage Three:
Definitely NO sunshine for this one. The race started in damp Edinburgh, described a loop through the tough, wet roads of the Scottish Borders then finished with three laps of the Arthur’s Seat circuit, the extinct volcano around which Holyrood Park gives the capital city its green heart. It’s a tough old climb up there; back in 1970 the Commonwealth Games Road Race circled it all afternoon with Kiwi, Bruce Biddle winning in 4 hours 38 minutes – one hard day at the races. 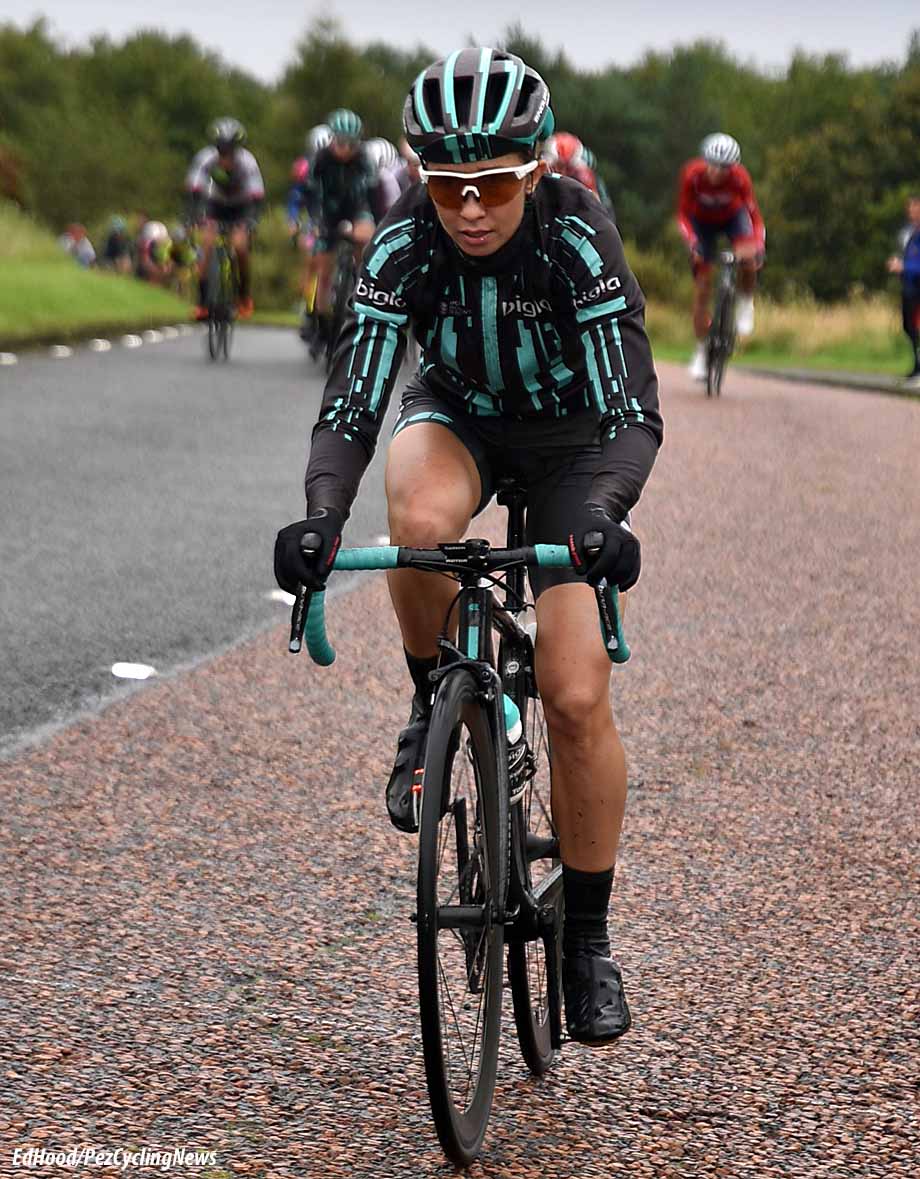 Queen of the Mountains, Cecilie Uttrup Ludwig (Bigla and Denmark) was first up, looking smooth and focused. 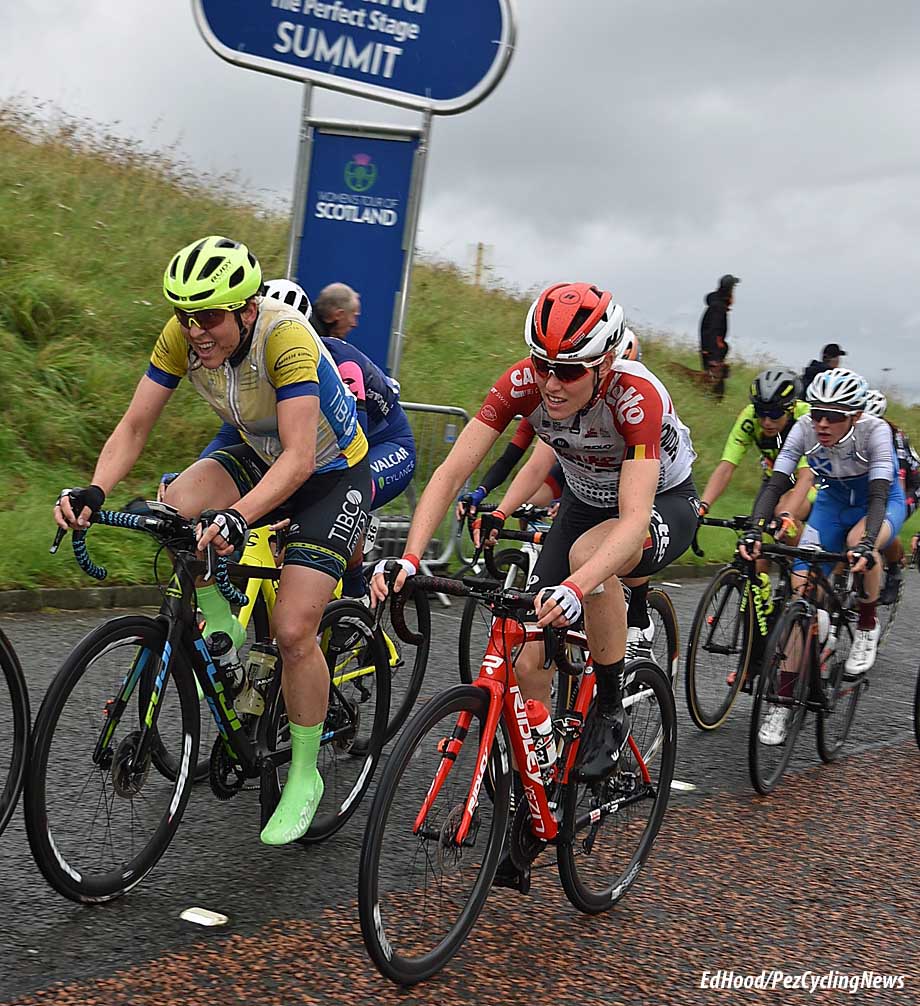 Ed made it to the summit

Ms. Shackley was again well positioned and would end the day in as best Scot, 13th on the stage and on final GC. 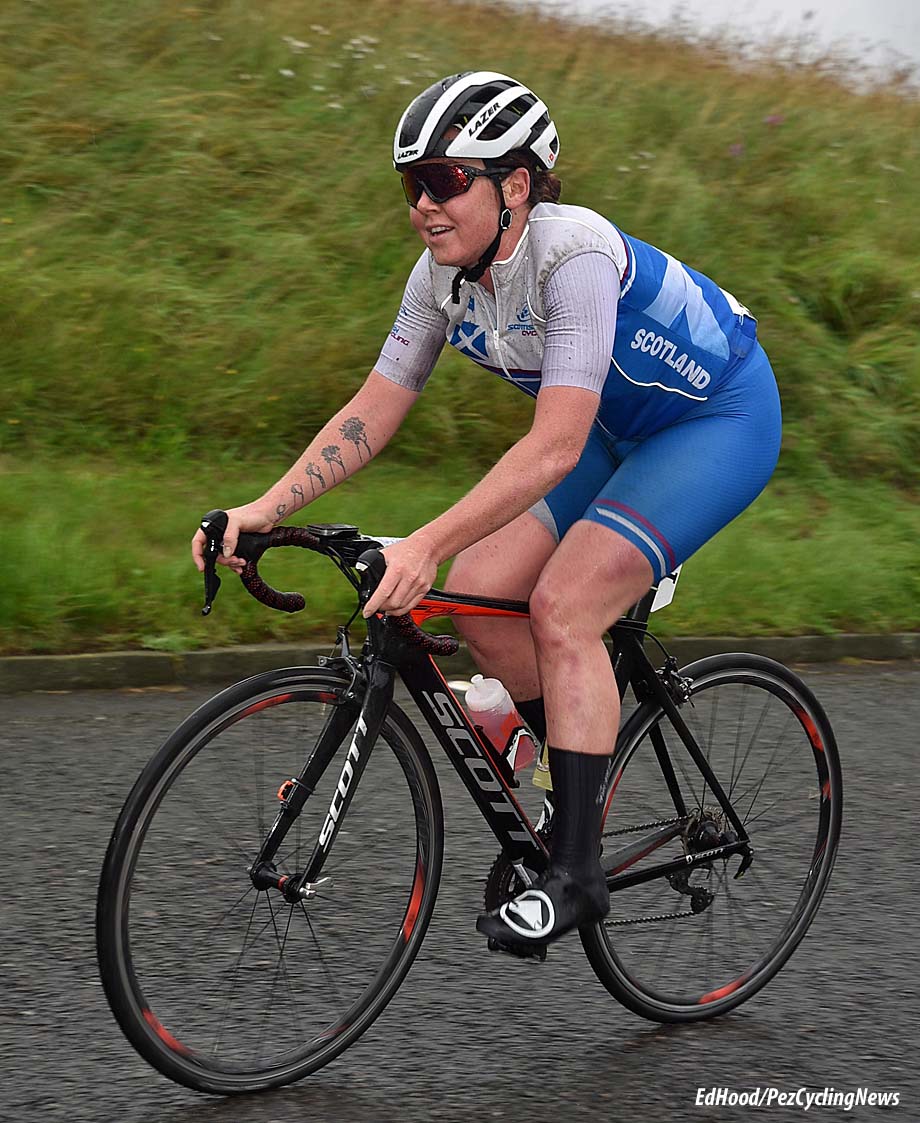 But team mate Archibald wasn’t quite so well positioned. 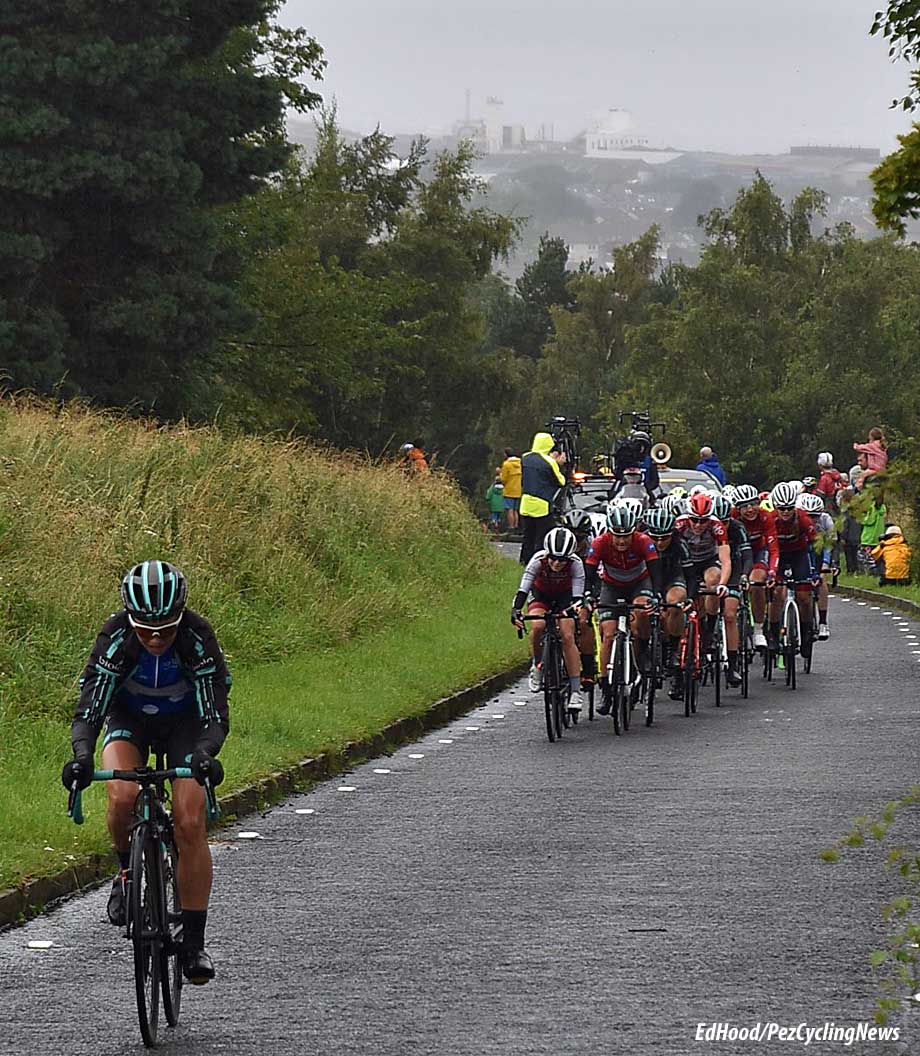 Lap two and the slim Dane, Ludwig was at it again, putting daylight between her back wheel and the shrunken peloton. 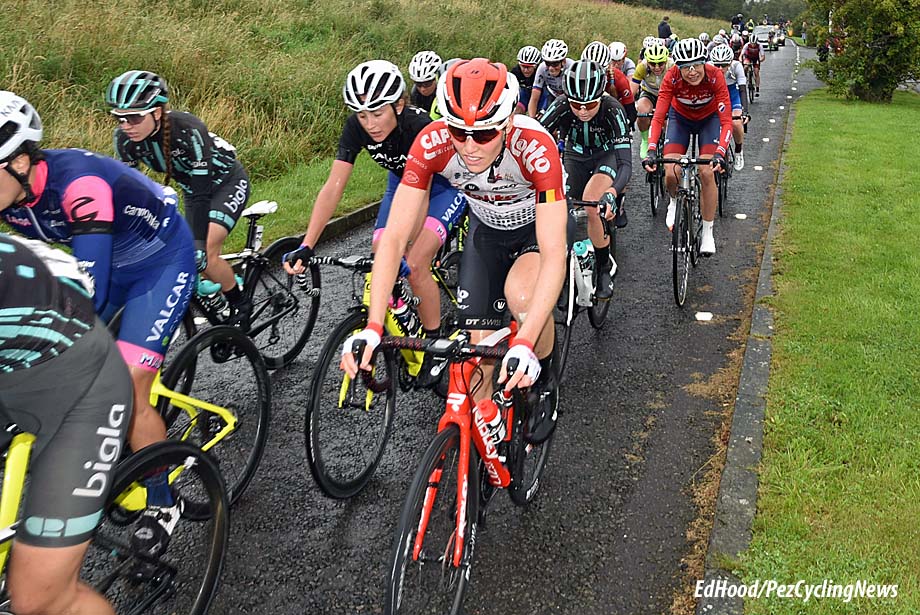 Back in the sodden peloton Bigla were well positioned with a lot of faces saying that they just wanted this day to end. 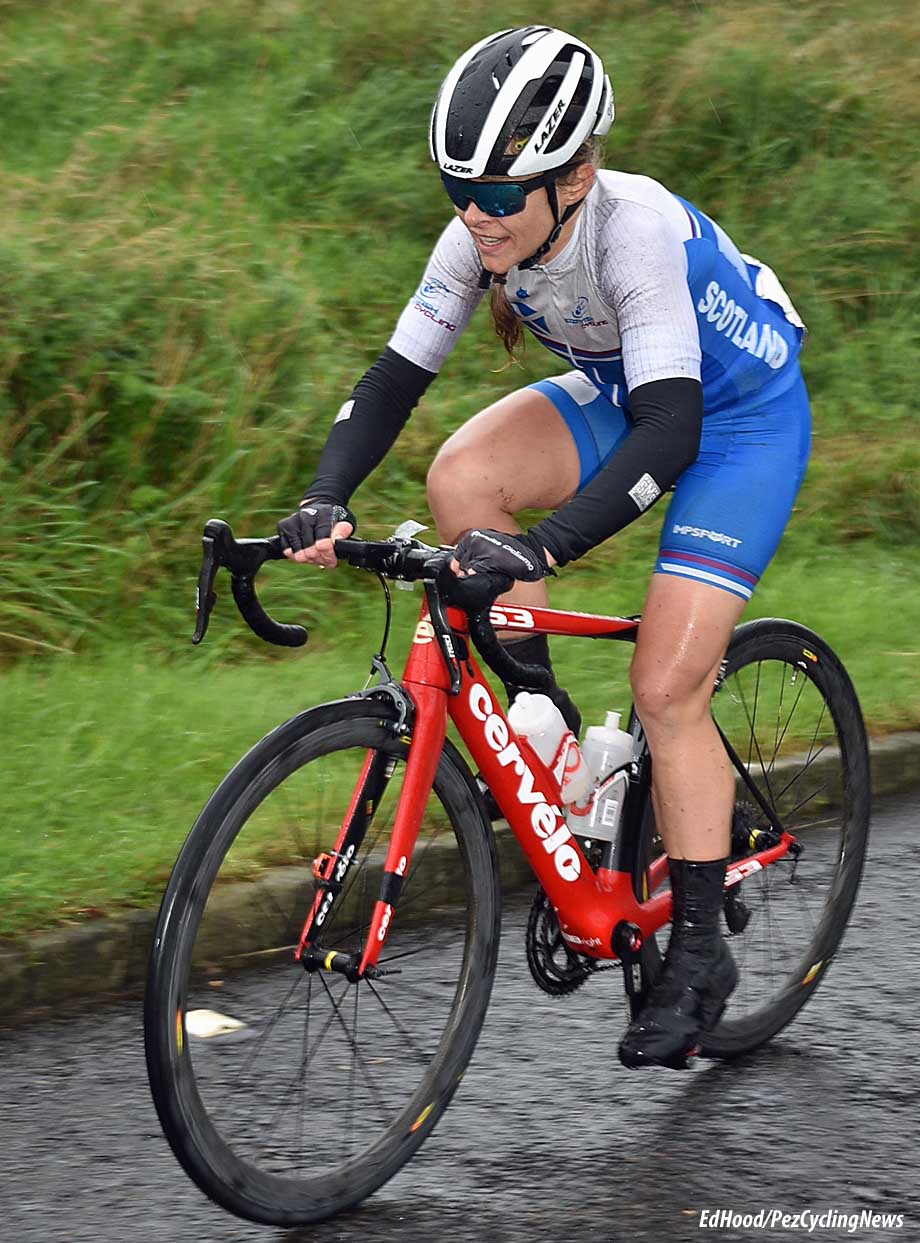 Scottish Champion, George was a little further back. 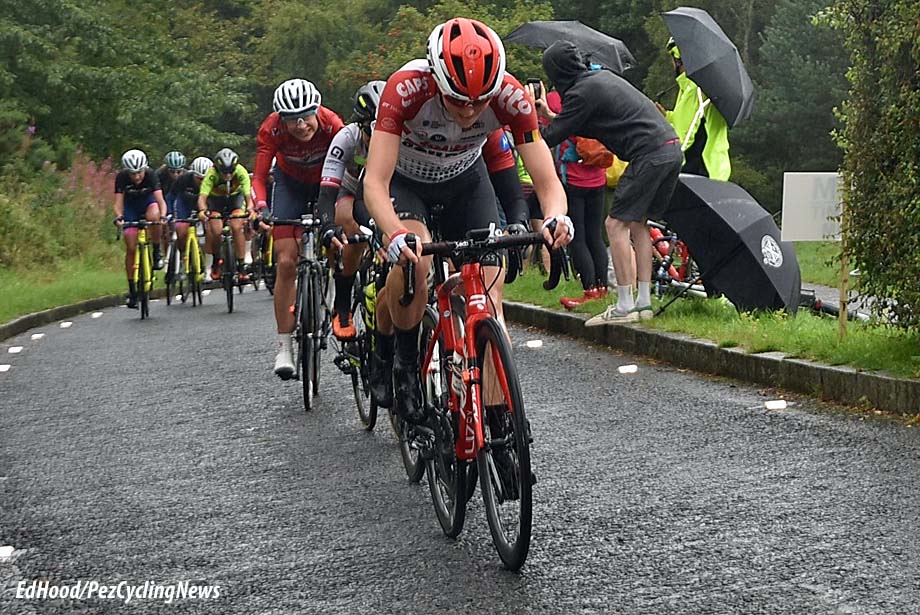 And it was Lotto turning the screw up through the murk on the last lap. 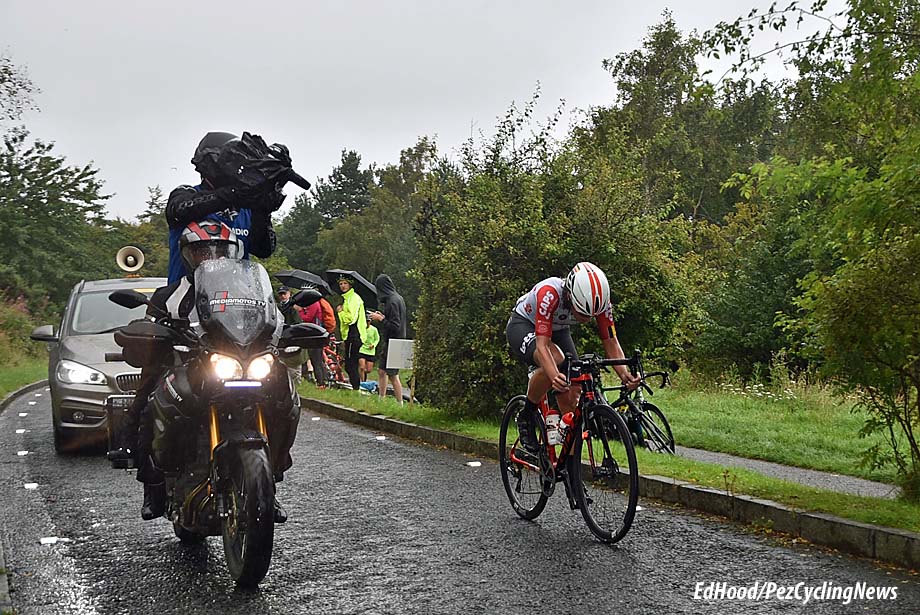 With the TV camera man making sure he caught ALL the pain for his viewers. Down at ground level it was US rider Leah Thomas (Bigla Pro Cycling) who took the sprint and the final GC from Stage Two winner, Jackson. 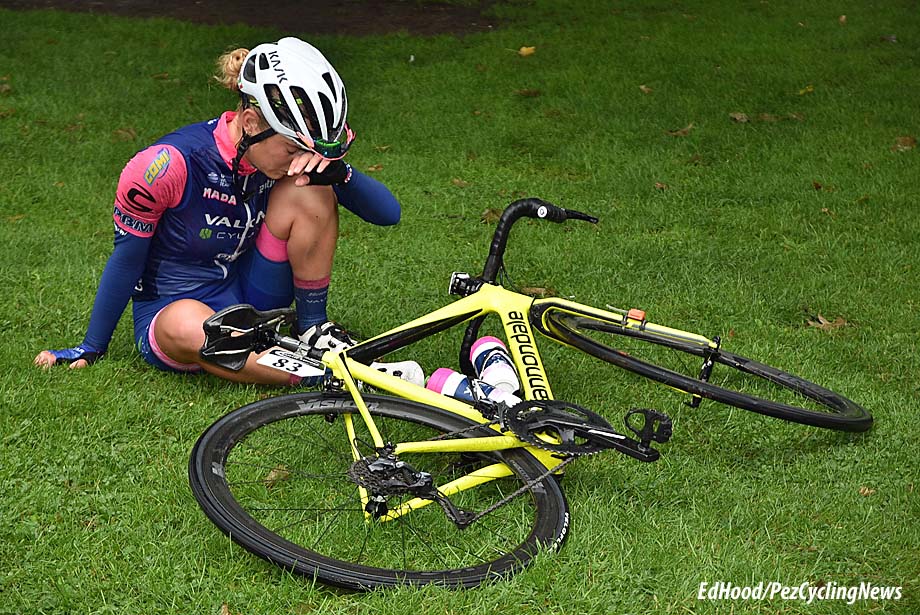 No big smiles from Silvie Pollicini (Valcar Cylance Cycling and Italy) though, just a wet backside and no prize money. 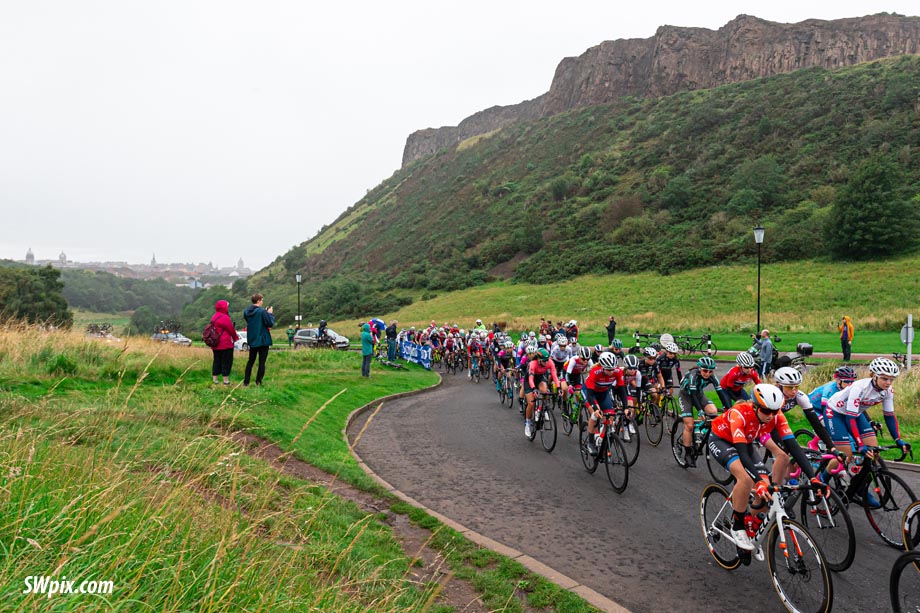 The climb of Arthur’s Seat with Edinburgh in the distance

For your PEZ reporter it was a battle home through the crazy Edinburgh Festival traffic, too many 2019 vehicles on cobbled roads designed for horse drawn traffic. Let’s hope there’s a 2020 edition and we can but pray for better weather for that one. 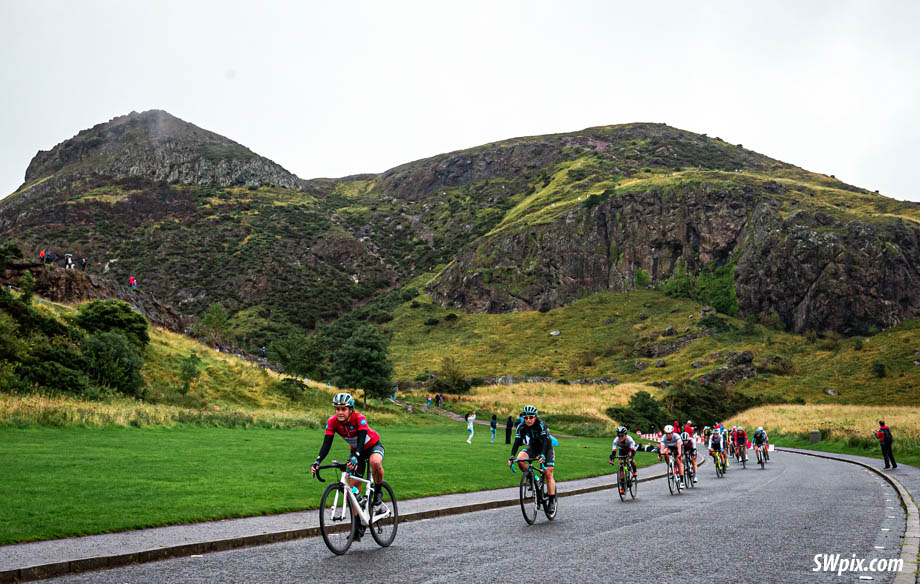