Ed Roadside: After the Elite men’s time trial, the Yorkshire World championships have jumped to the road race rainbow jersey competition and Ed Hood is in Harrogate for more action. First up was the stunning win by Quinn Simmons in the junior mens race.

You can see the ‘PEZ Race Report’ HERE. 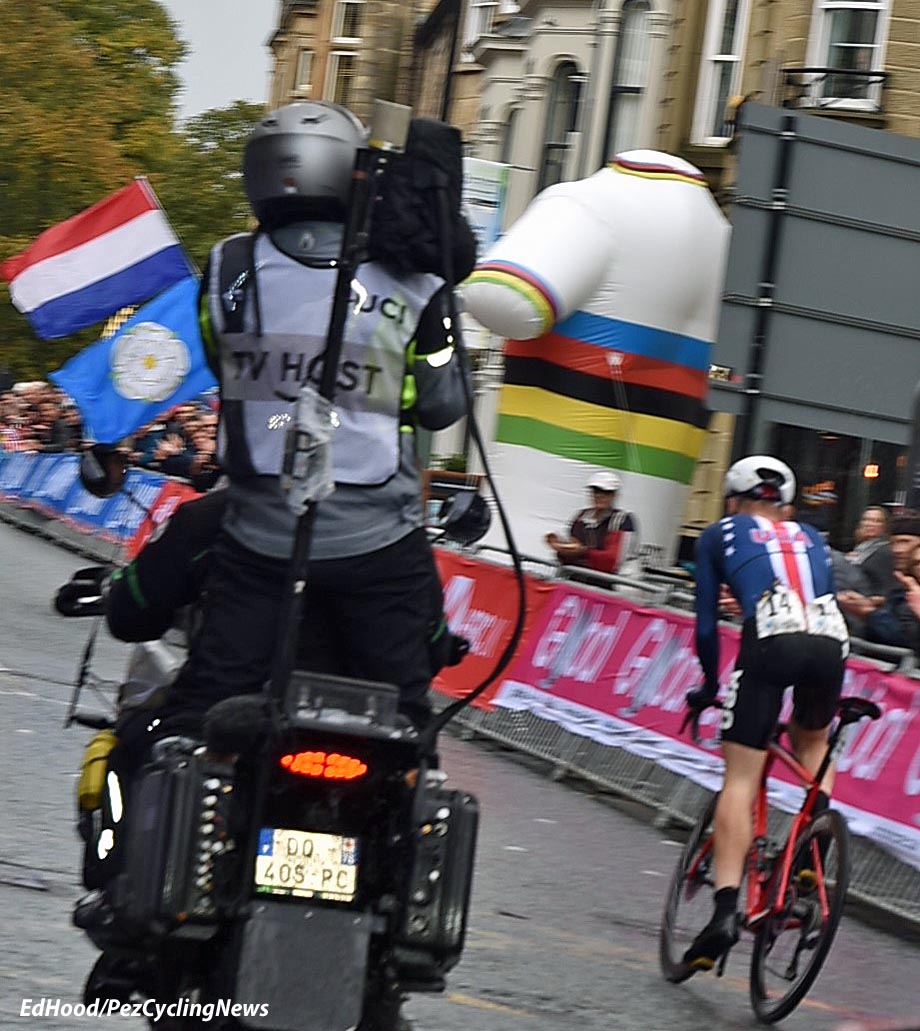 Seriously though, a cracking ride from the 18 year-old bearded American, barn door of a strong man who goes to World Tour team Trek-Segafredo for 2020. US Team manager, ex-pro, Roy Knickmann had this to say; “The US junior team rode like a Pro Tour team dictating even moment of the 148km road race. Selfless riding by every member of the team resulted in a US World Champion as well as a bronze medal. Huge day for the guys.” Can’t argue with that. 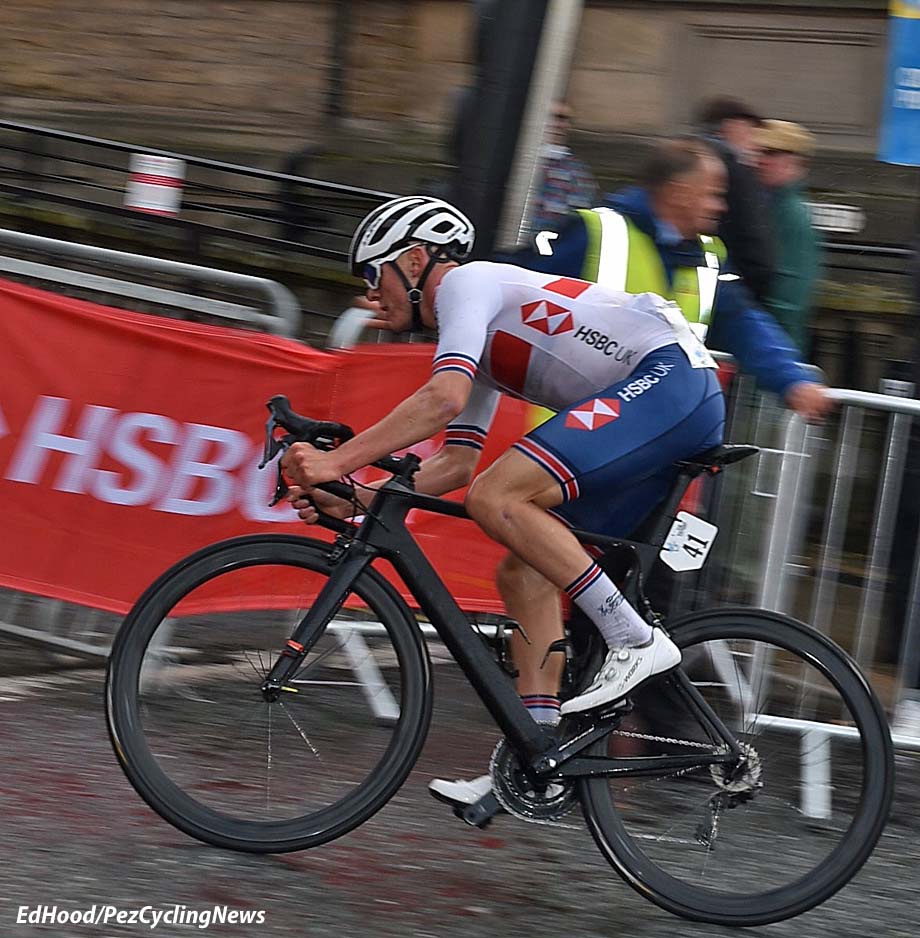 But also an excellent performance from Scotland’s Alfie George riding for GB to take seventh in a race of attrition race on a miserable day on tough Yorkshire roads. It was a nice morning up in picturesque Richmond for the start with some 140 plus riders lining up in the old town square. We caught with big Kiwi, Finn Fisher Black for a chat, he won the Junior Tour of the Kingdom up in Scotland, earlier in the year. His main goal was the junior time trial Worlds but a broken wrist compromised that and in the end he was happy with 10th place. 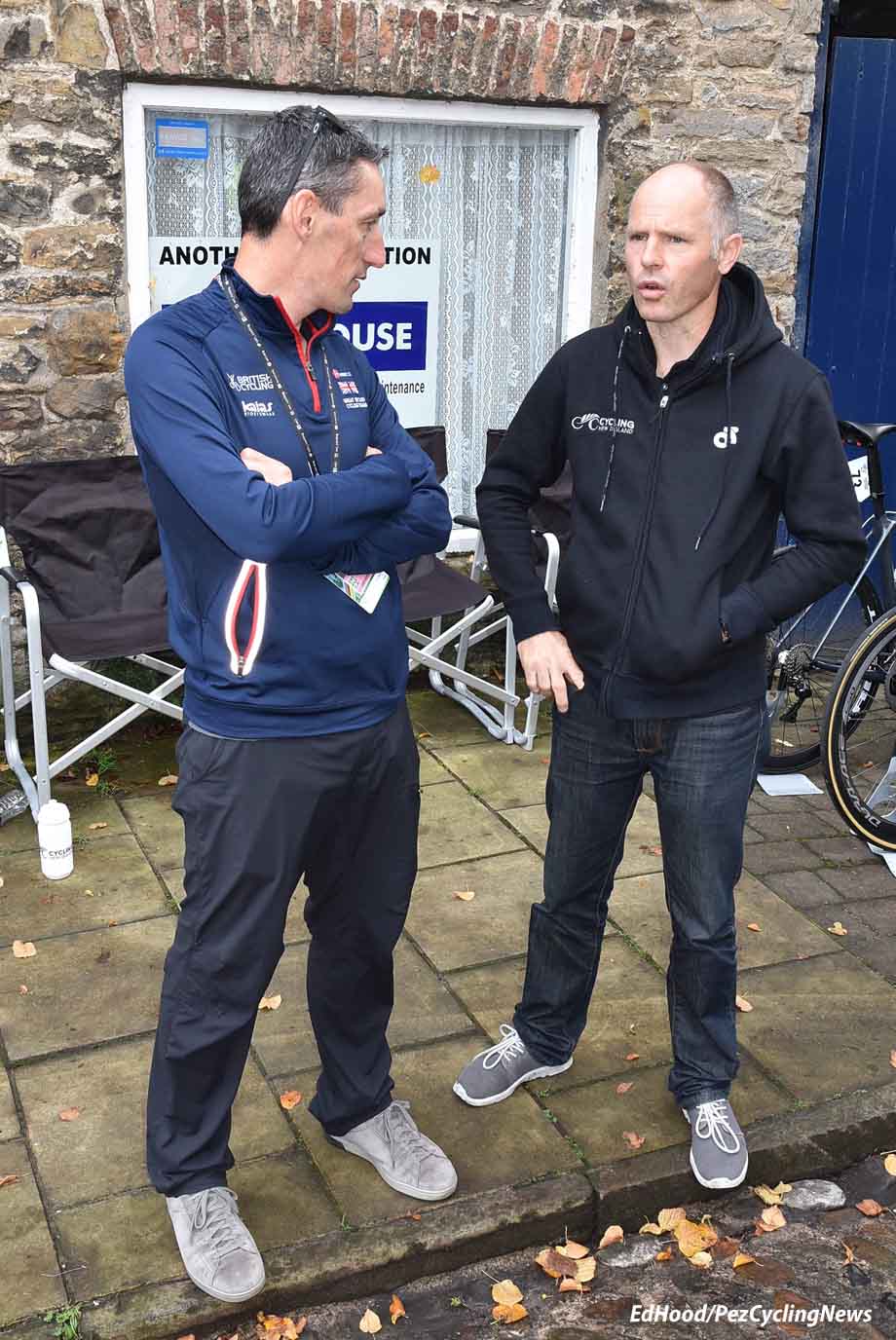 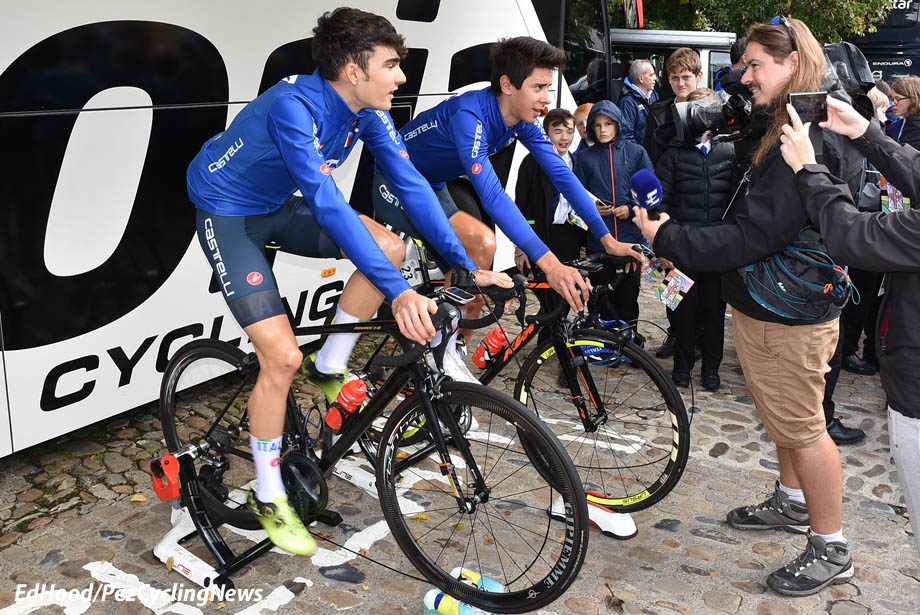 Marco’s young Italians were looking way too cool to be juniors but then. . . they are Italians. Former World Pursuit Champion and Tour de France star, Brad McGee was quietly and anonymously going about his business of looking after the young Aussies. We looked in vain for the USA team; we wanted a look at them, knowing them to be one of the strongest teams in the race with riders like eventual winner Quinn Simmons – who won this year’s u23 Ghent-Wevelgem – and Michael Garrison, winner of the ‘Junior Tour de France,’ the Tour de l’Abitibi in Canada. 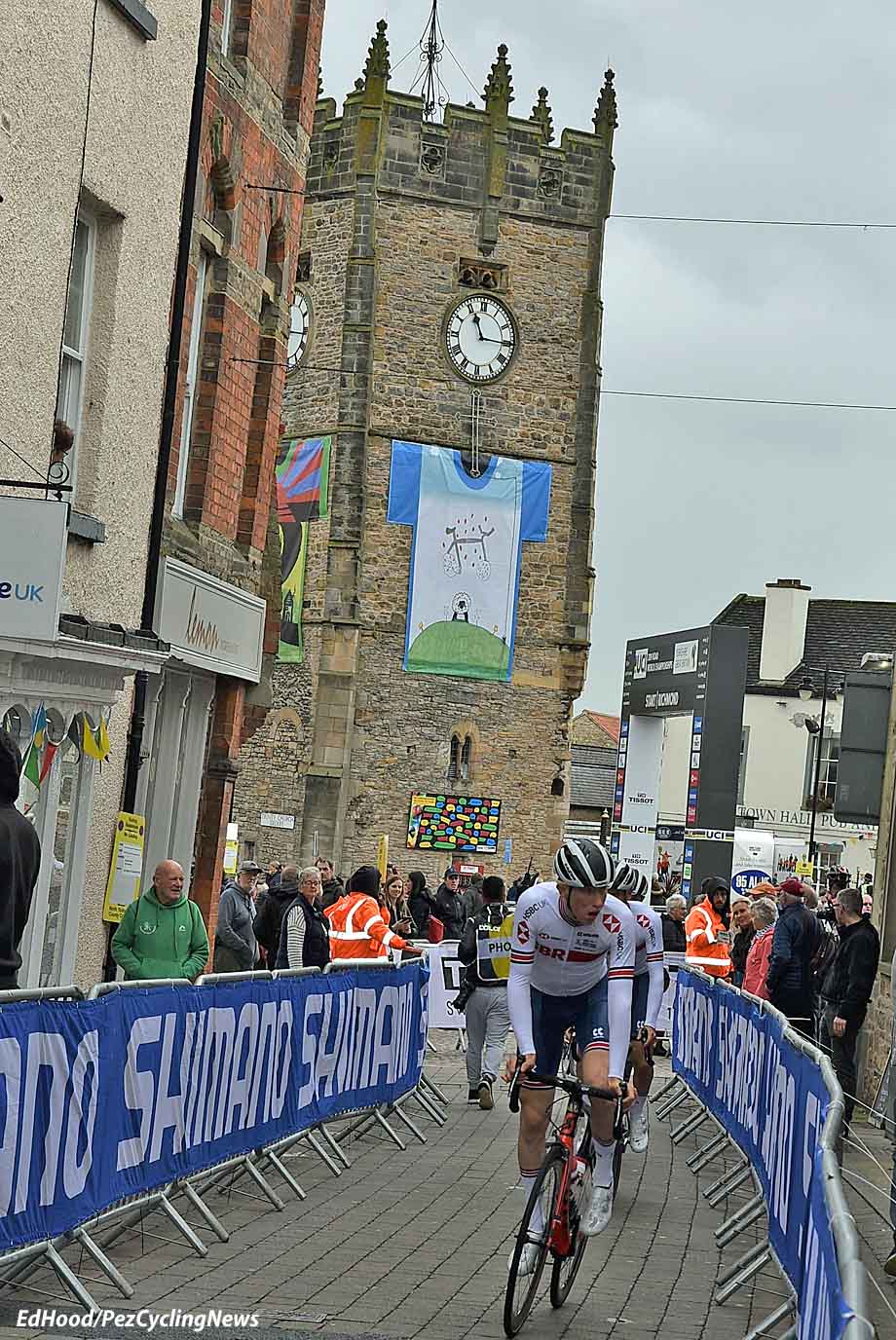 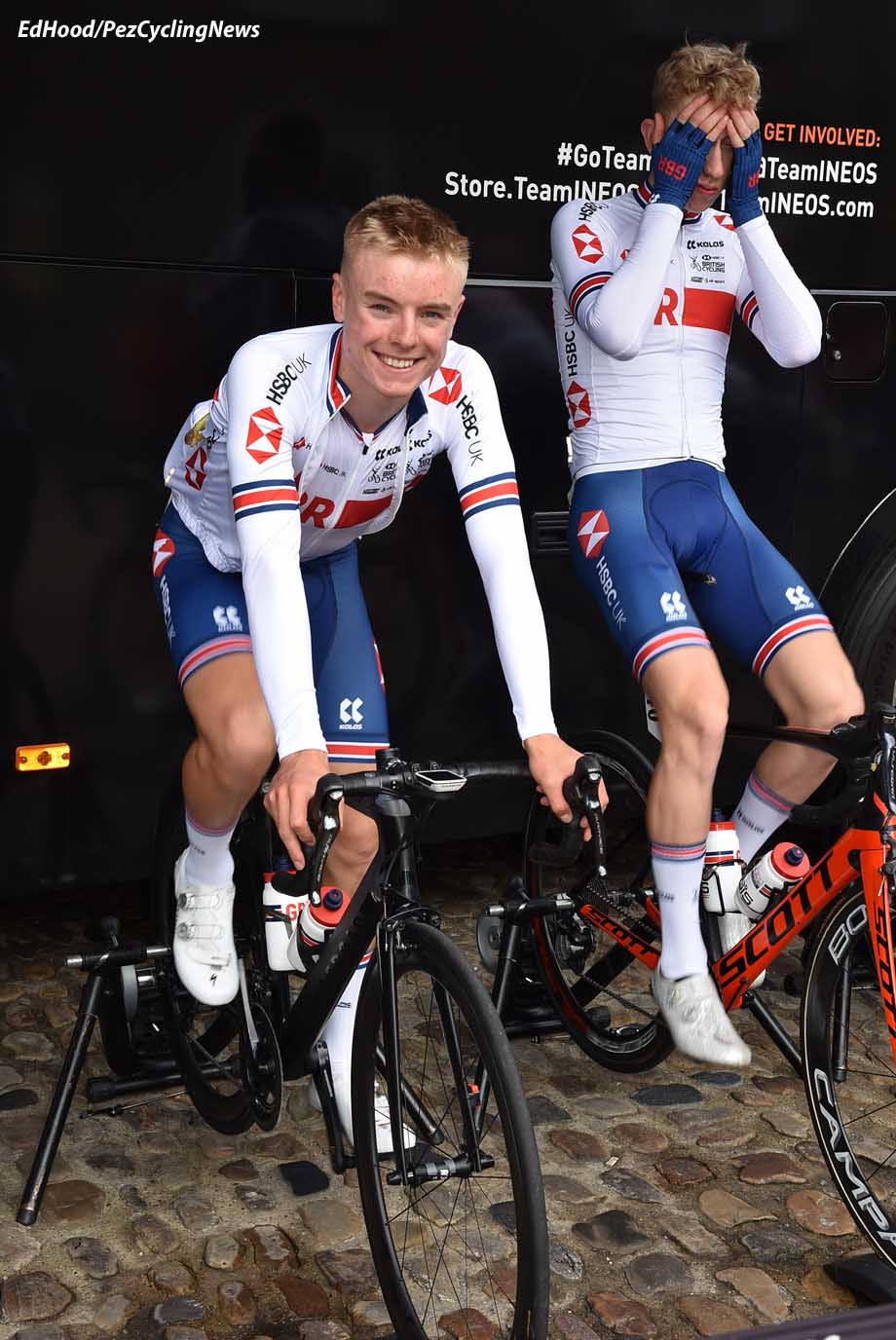 We found the GB lads though, on their way back from the sign-on with Alfie George happy to stand and chat before the team lined up on their turbos outside their home for the day, the Ineos team bus – nice. 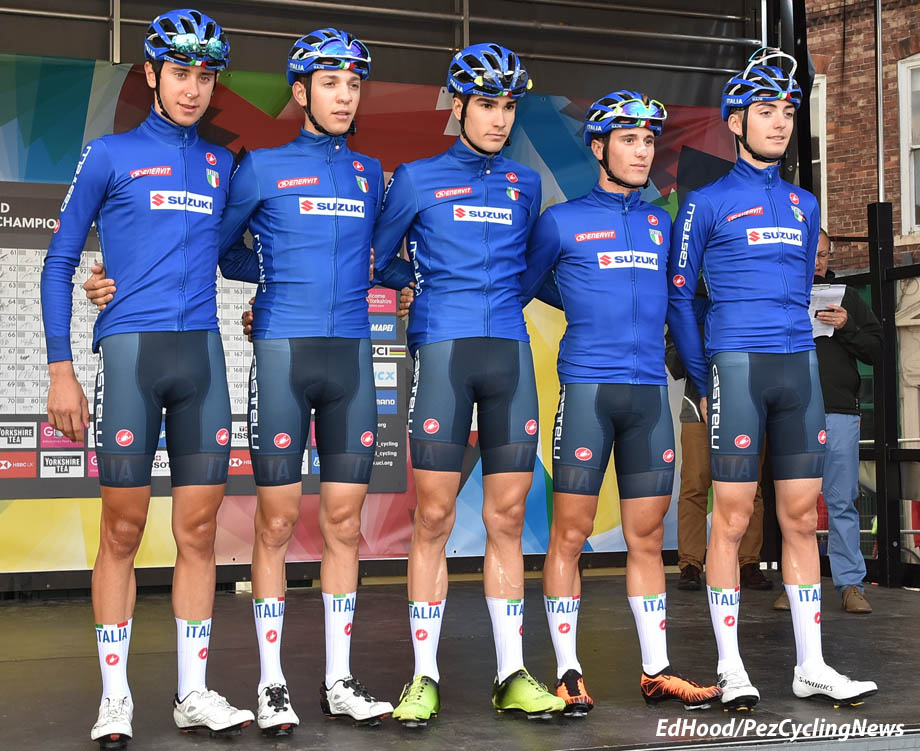 Time to head for the start with the teams signing on together and then being presented to the crowd. 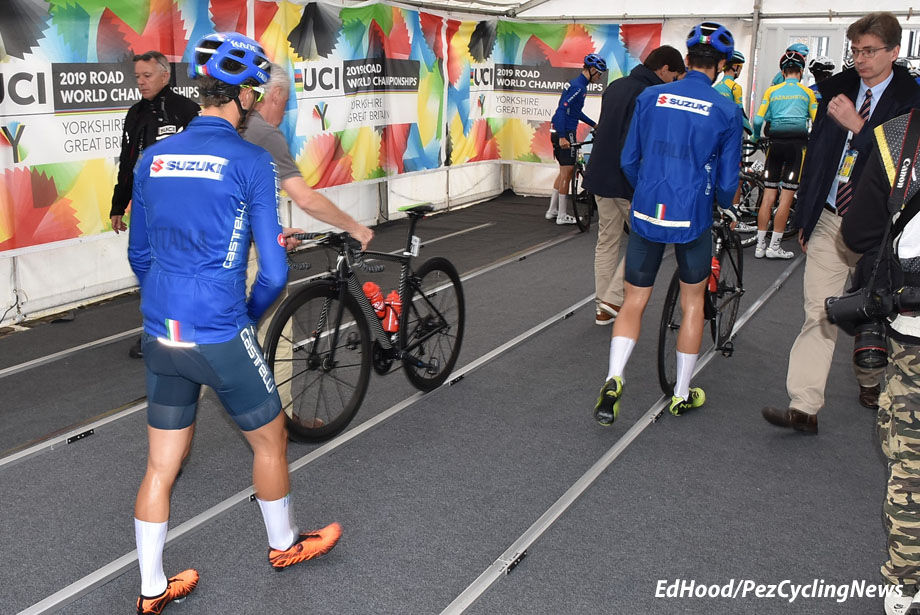 Before the teams lined up at the start, one by one behind the start line, we had a wee peek into the gear check tent where all bikes are vetted to make sure a distance of 7.93 metres/pedal revolution cannot be exceeded. 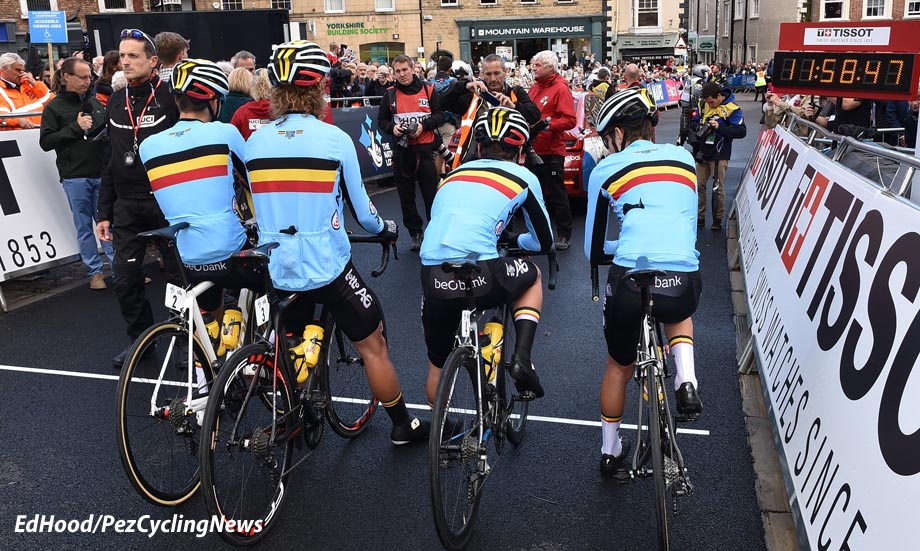 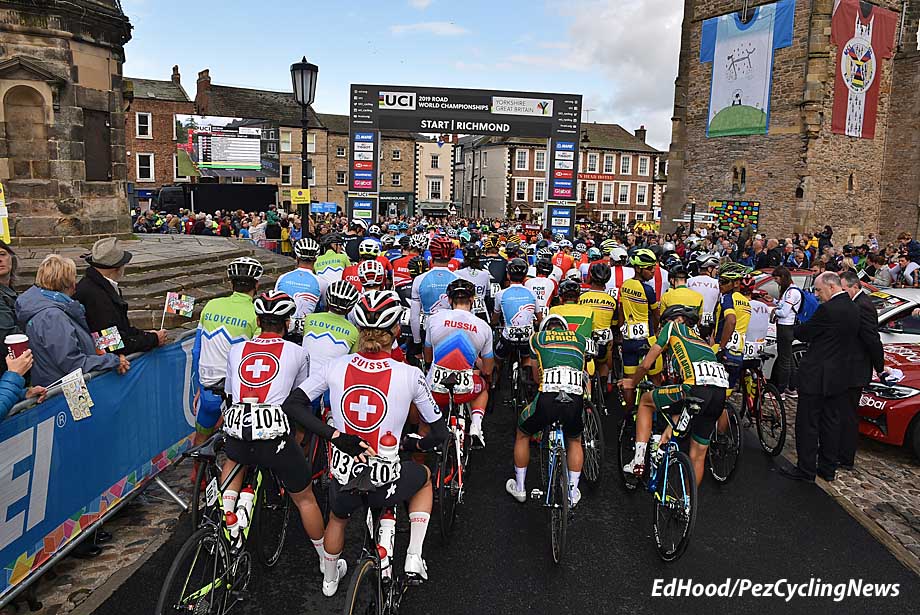 Belgium were first to the line then Germany with the teams flooding in after that and at 12:10 on the button, they were off. It wasn’t possible for us to catch the race up on the moors and still make it back to the finish, so we headed directly back to Harrogate, a glance at the famous Betty’s tea room and. . . the rain. 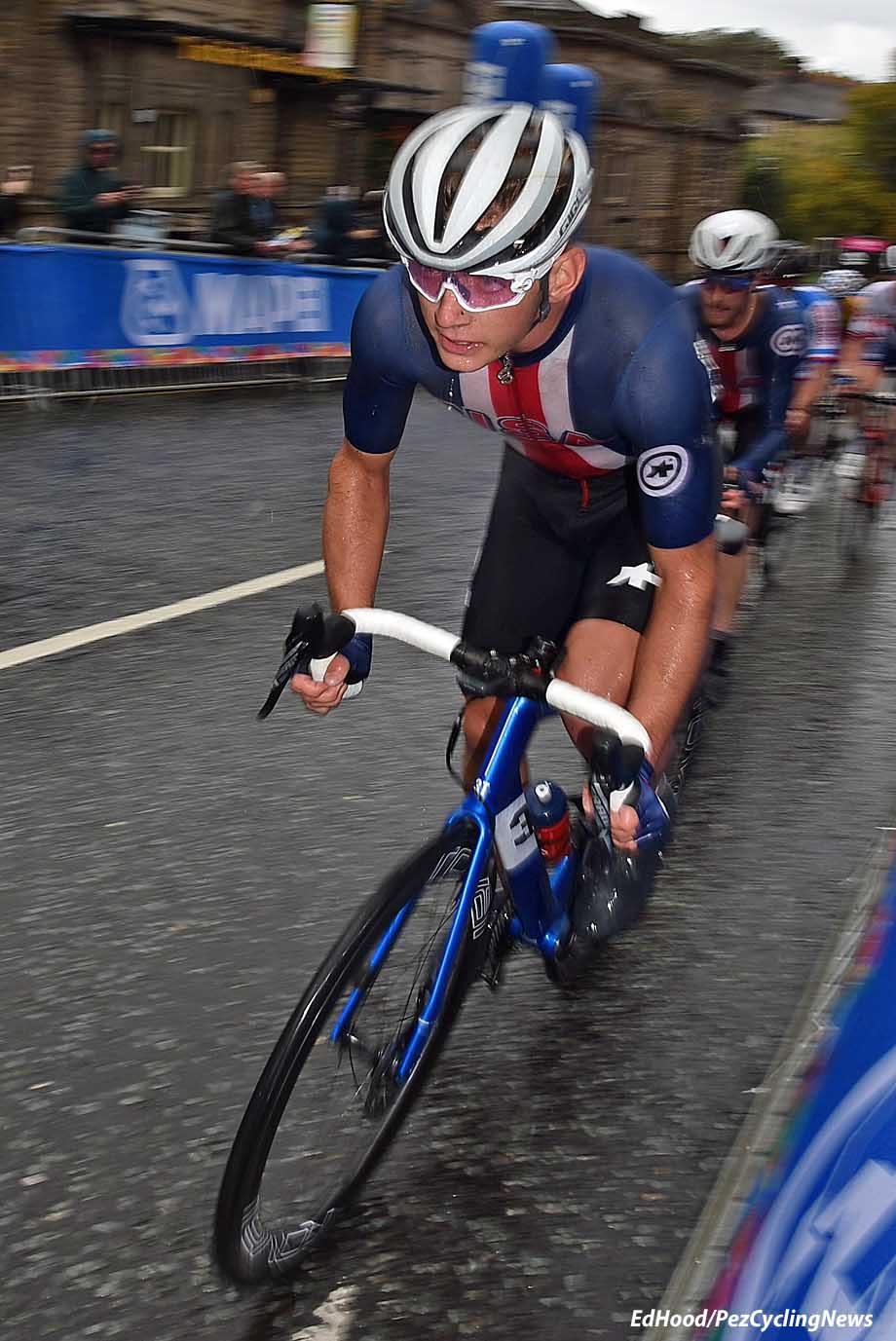 The juniors had three laps of the urban finishing circuit on the menu, with a group of five including eventual bronze medallist Magnus Sheffield of the USA clear. A group which winner Simmons would bridge over too. 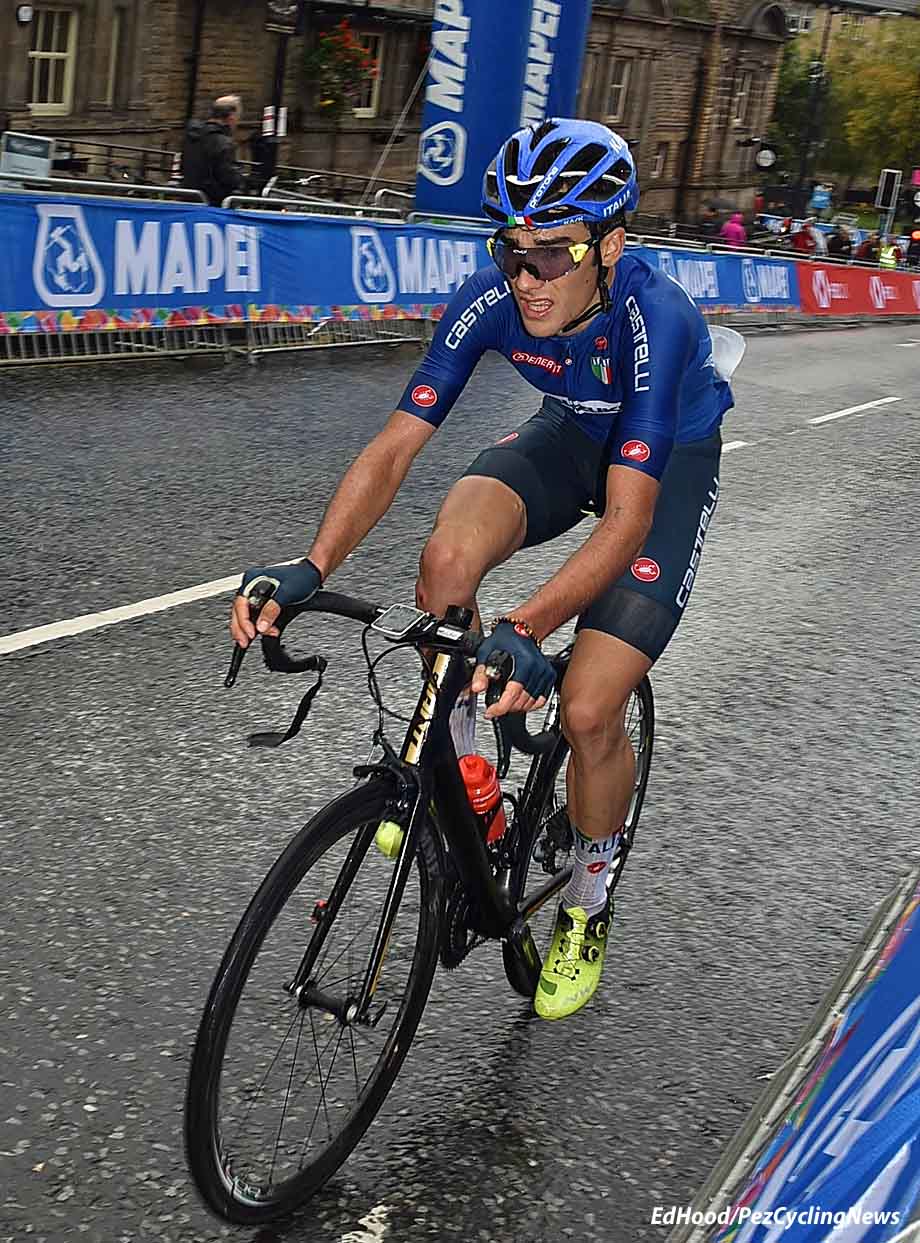 Behind there was a big group then a plane crash with the likes of number 24, Eduardo Zambanini of Italy having been on the deck. 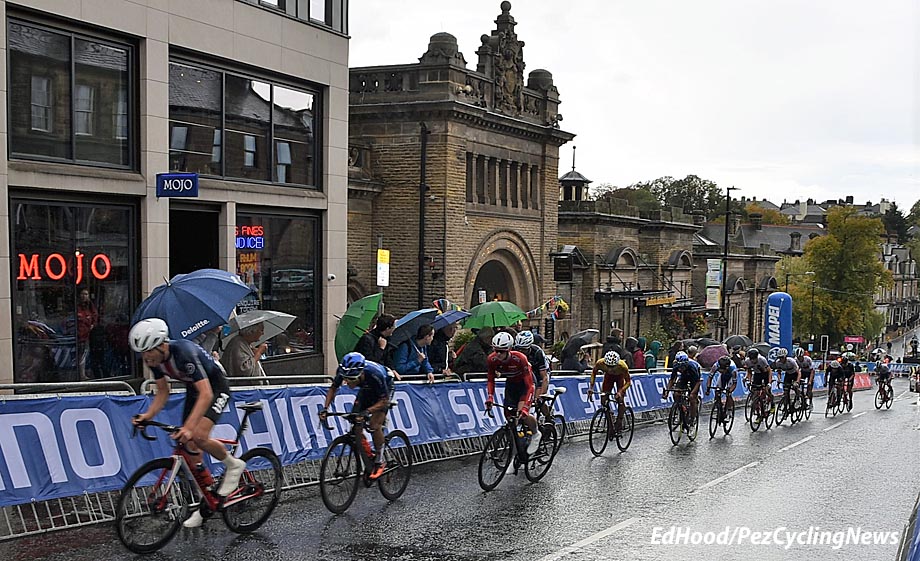 Each time we thought the last rider had passed, another would appear, then another little group. . . Eventually lone riders and little groups would be pulled out by the race officials if they were in danger of being lapped. Lap two saw the lead group absorbed and the name Simmons become the one the speaker referred to most often as he bolted off over the wet streets of the spa town. 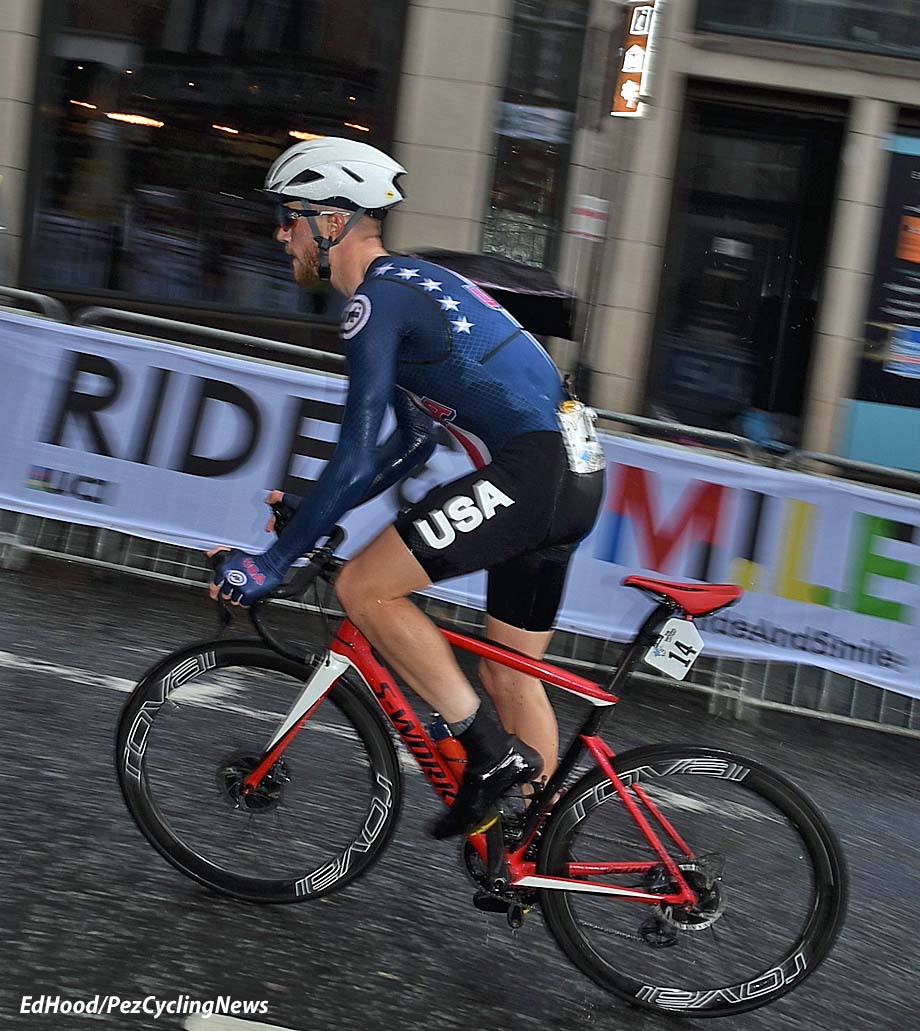 Once the solidly built man from Durango, Colorado went clear solo, he was never seen again, so strong. No surprise perhaps; as well as the u23 Gent-Wevelgem he’s won a stage and the GG in the Belgium’s Keizer des Juniores in September, two stages and the GC in the Swiss GP Ruebililand at the end of August, a stage and the points classification in the Swiss Tour du Pays de Vaud in June and the three stages and the GC in the Dutch SPiE Internationale Juniorendriedaagse in May. 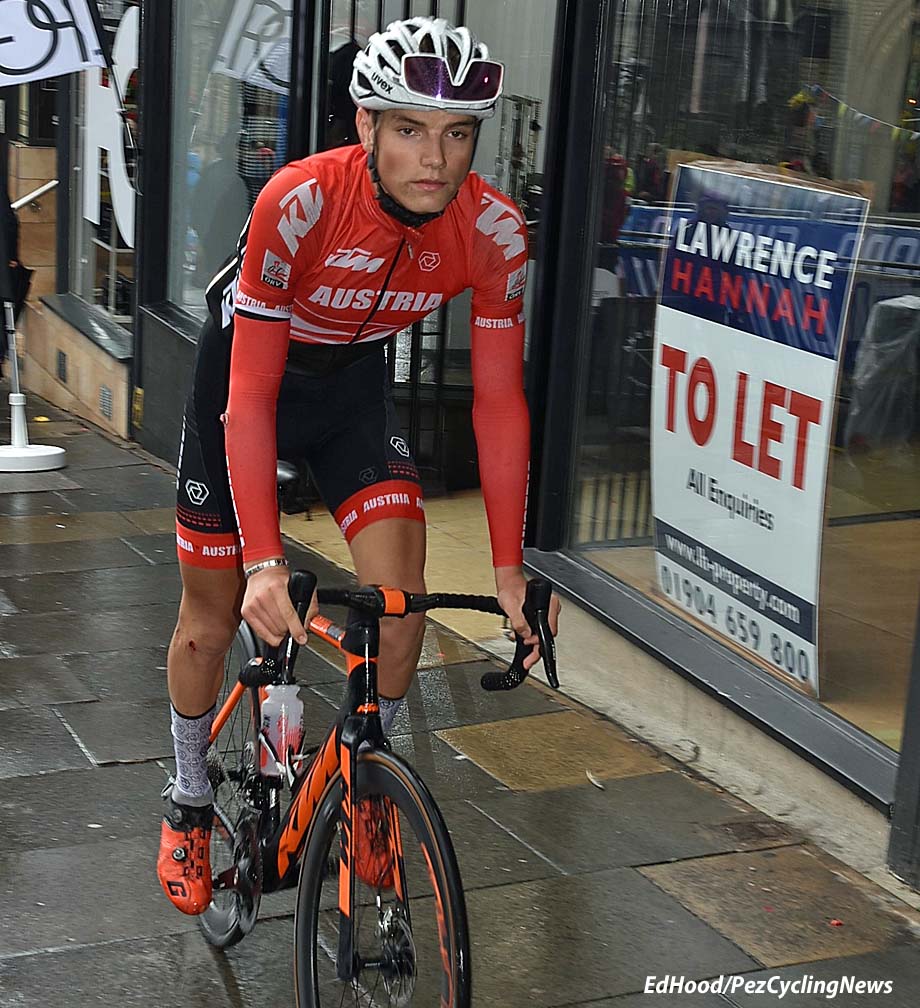 By now, riders were throwing the towel in and lone souls could be seen riding on the pavement behind the barriers seeking the dry and quiet of the team bus. 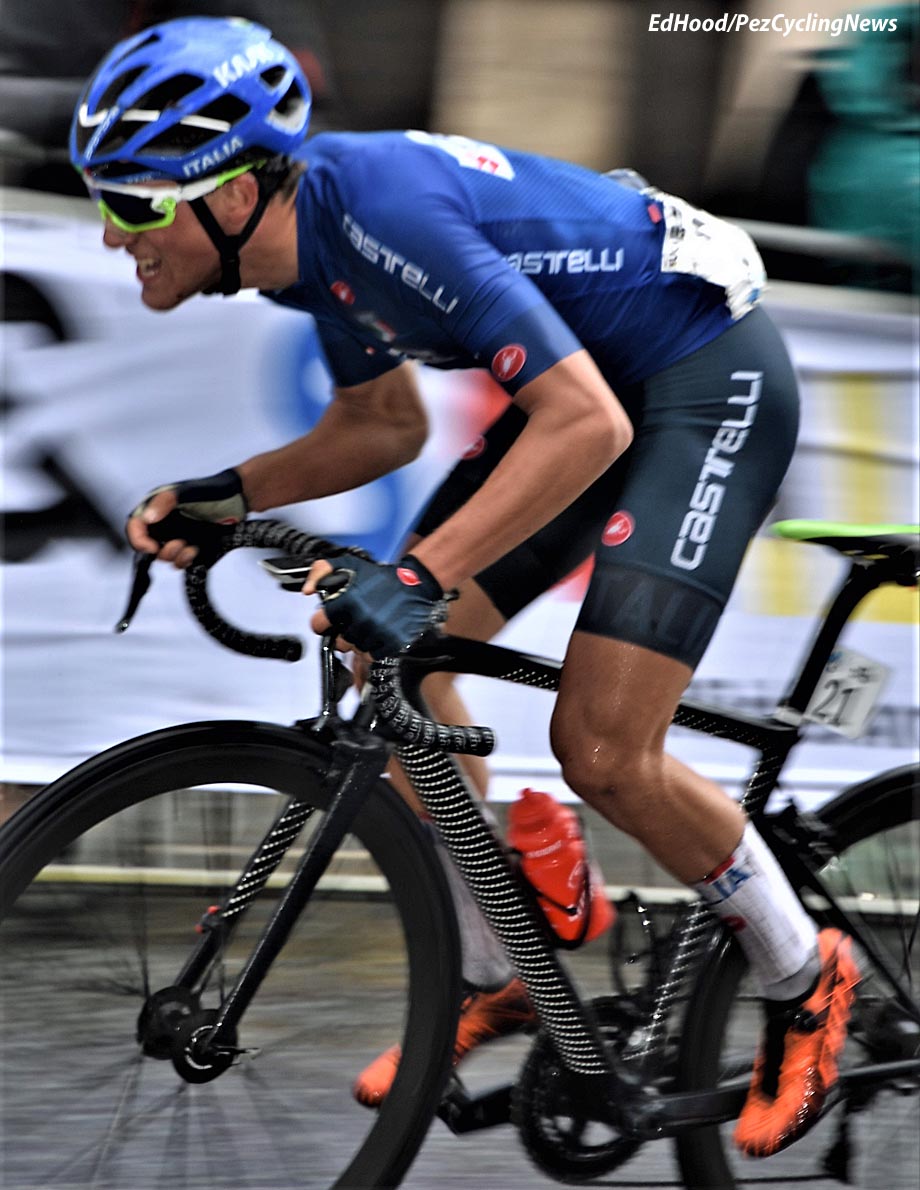 Simmons lead just kept growing and the desperate chasing efforts of Italy’s Antonio Martinelli were in vain as the big American showed no sign of weakening, his margin at the end would be close to one minute, despite sitting up and enjoying that solo ‘finishing straight moment’ of his young life. Martinelli would hold on for second but there was a dog fight for third as individuals ‘popped off’ – to use Alfie’s words and were caught and other’s countered. At the line it was a group of four some 37 seconds behind Martinelli contesting the sprint for bronze with Simmons’ hard grafting team mate, Magnus Sheffield taking home the metal work, leaving Enzo Leijnse (Netherlands), Gianmarco Garofoli (Italy) and Vegard Stokke (Norway) in fourth, fifth and sixth place respectively.

A scant 12 seconds later Alfie was best of a group of nine to take a fine seventh place. After the race we tracked the young Scot, who earlier this year was fifth in the Junior Paris-Roubaix and third in the Omloop van Boorsele, as well as being part of the GB team which lifted gold in the European Junior Team Pursuit Championship, in a Harrogate back street, conscious we couldn’t have him hanging around in wet gear too long.

He told us; “It was active from the start but nothing stuck; but it was a long race at 148 kilometres, the longest ever apparently, we thought that the UCi maximum for a Junior Worlds was 140 kilometres? You pretty much able to coast in to the first climb at Kidstones Bank – we thought it might really kick off up there but whilst it was tough it didn’t kill too many off. But up on The Dales over the Summerscales climb it was super-hard with the Americans really going for it – that was the hardest part of the race for me. Coming into Town there was a group of five or six away and we had Lewis Askey in that but when that came back we were kinda, ‘what now ?’ Sam Watson and Lewis made attacks but were brought back, then guys started popping off the front and I realised it was going to be down to a sprint for the placings for me.” 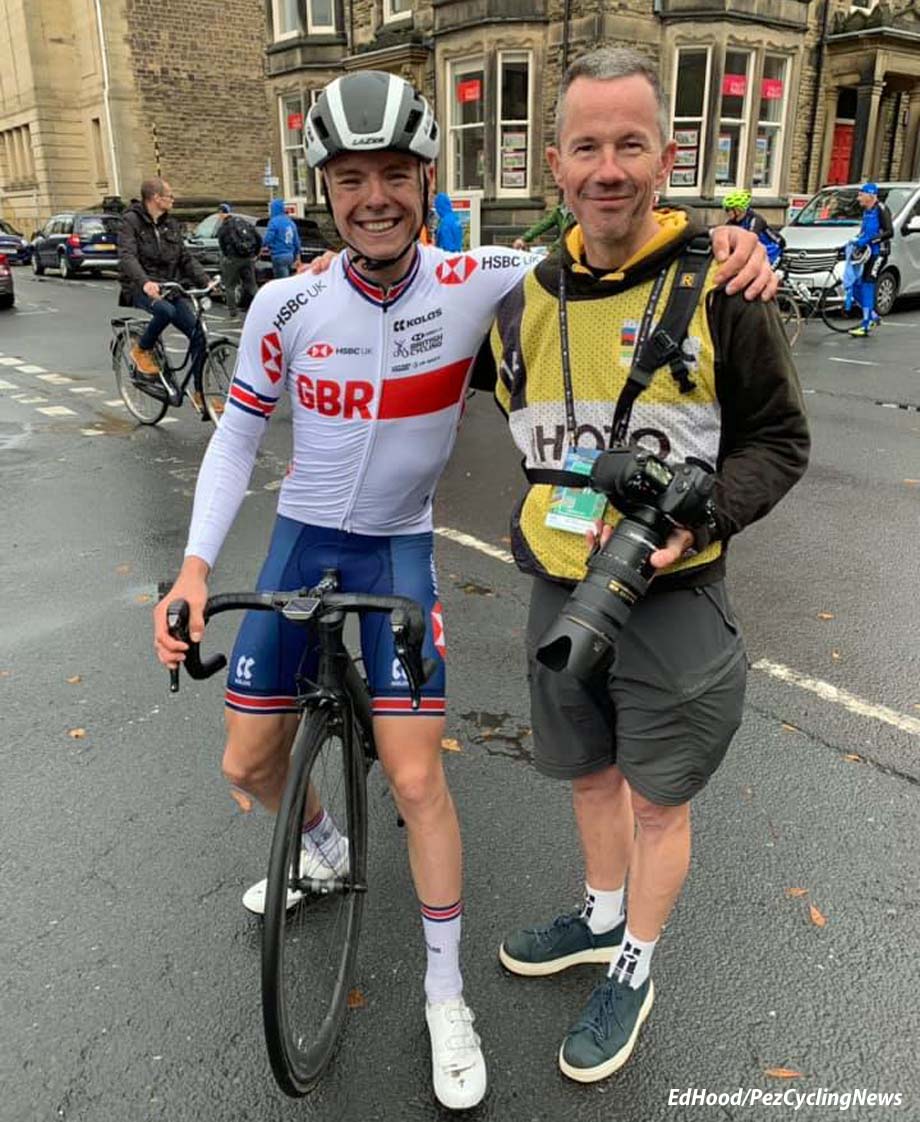 We let Alfie get back to the shelter of the ‘Death Star,’ as the opposition used to tag the Sky/Ineos bus and, headed off in search of a decent coffee. It had been a good race to watch on an interesting parcours and we had a Scotsman to be proud of; we even forgot about the rain, almost – and the coffee was nice.