Say what you want about PEZ, but you can’t say we don’t air both sides of a story. On Wednesday Lee Rodgers aimed his eagle eye at David Millar’s new job with British Cycling in his Lowdown and he was less than convinced at the validity of the appointment. Ed Hood, on the other hand, has penned his thoughts from the other side of the debating chamber and taken to the hustings… Ed’s view:

A few weeks ago I popped a picture of David Millar up on a social media page devoted to Scottish Cycling – I do daft things like that. It was a nice shot of the man back at the 2009 Three Days of De Panne but I was surprised by the wrath it brought upon me. 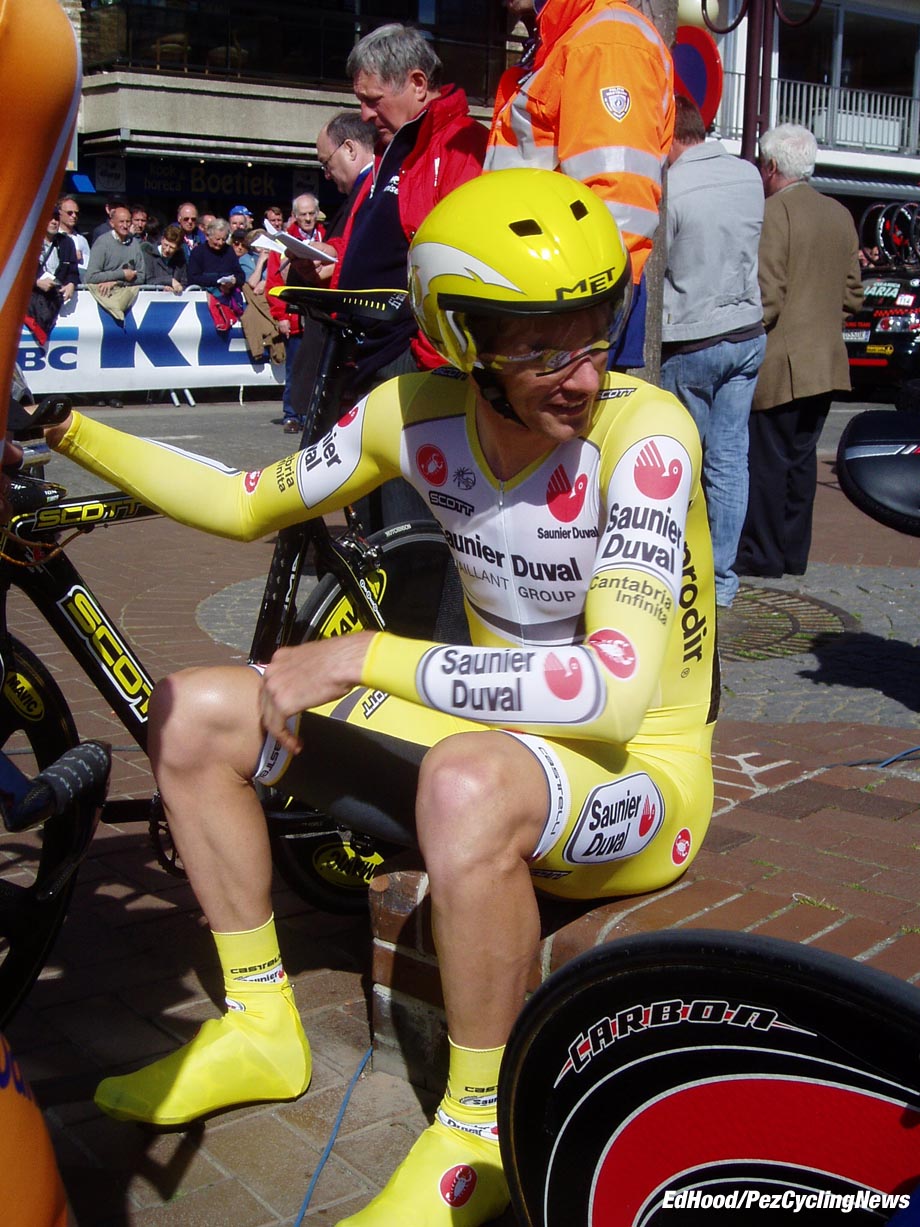 Happy to return to the peloton

Apparently the basic tenet of Western Justice that once you’ve served your time for a crime then the sheet is clean doesn’t apply in Cycling – or to David Millar, at least. I guess he’s an easy guy to build up a hate complex about; there was that ‘Boy David’ drivel we had to put up with before he became a pariah. He is a bit of an ‘art school boy’ and then there’s the Maserati, the Paul Smith hype, those abominable shoes and his preoccupation with making a film about his final Tour despite the fact that he’d hung on for the dreaded one season too many and Garmin wouldn’t give him the ride.

The man isn’t perfect, that’s for sure.

He was a precocious talent; winning races at will as an amateur in France then slipping seamlessly into a pro contract with Cofidis in 1997 with the maillot jaune in le Tour coming his way in 2000 and then the maillot amarillo of the Vuelta the following year.

In 2002 there was another Tour stage win and yet another in 2003 along with a Vuelta stage. But soon after that the wheels came off when he was busted for EPO – costing him the 2003 World Time Trial rainbow jersey. The next two years he spent in the wilderness, financially and mentally. 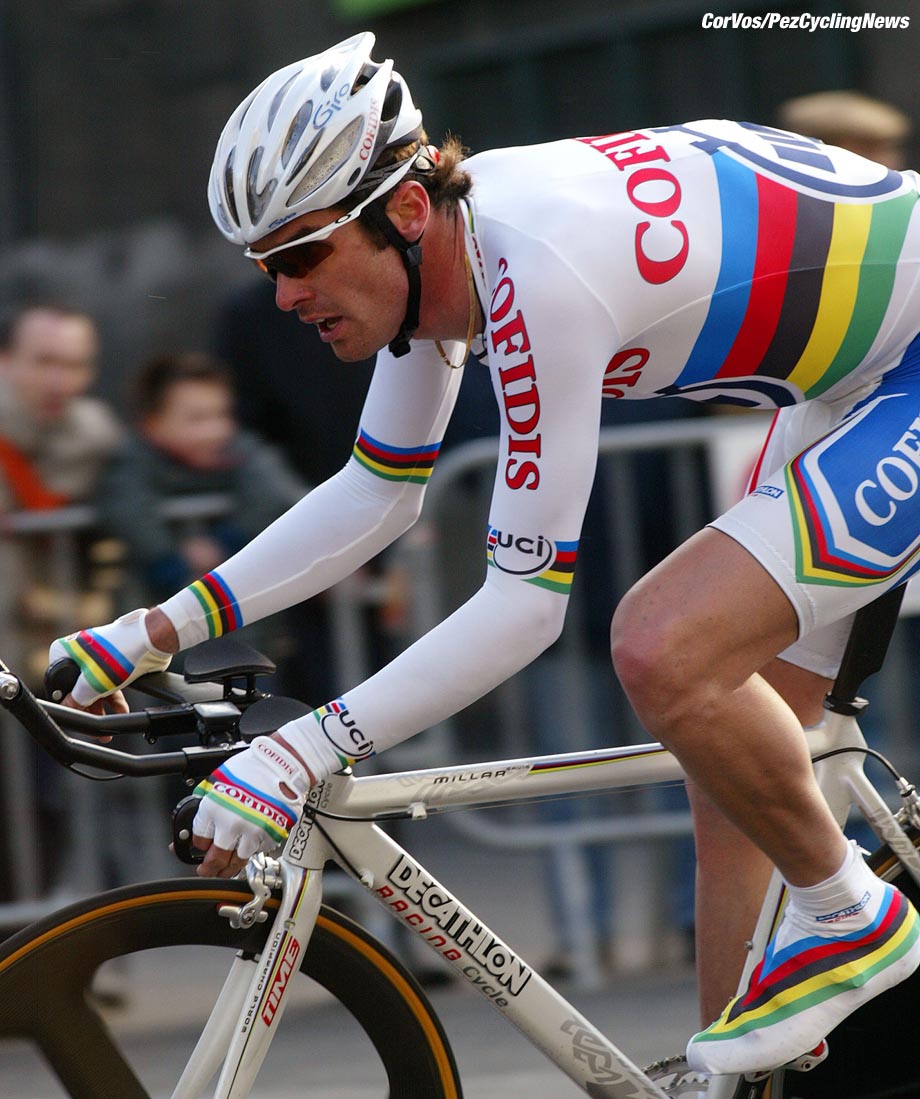 If you read his first book then you’ll be aware of a character he refers to as ‘The Major’ – he’s a man I knew well too, before he headed off to sunnier climes. He’ll tell you of Millar’s anguish and depression during that period and if you have read Millar’s book you’ll either realize that the experience drained him totally – if you disbelieve what he wrote then he should be writing scripts in Hollywood.

‘He brought it all upon himself,’ I hear you say. Indeed but surely his humiliation and two years of hell and lost opportunities were his punishments? And let’s not forget that the team he was in was one where doping was endemic – and not nearly as sophisticated as US Postal. There have been no fatalities that I know of among members of the US team; the current Cofidis death toll, stands at three; Frank Vandenbroucke, Philippe Gaumont and Robert Sassone. Coincidence? 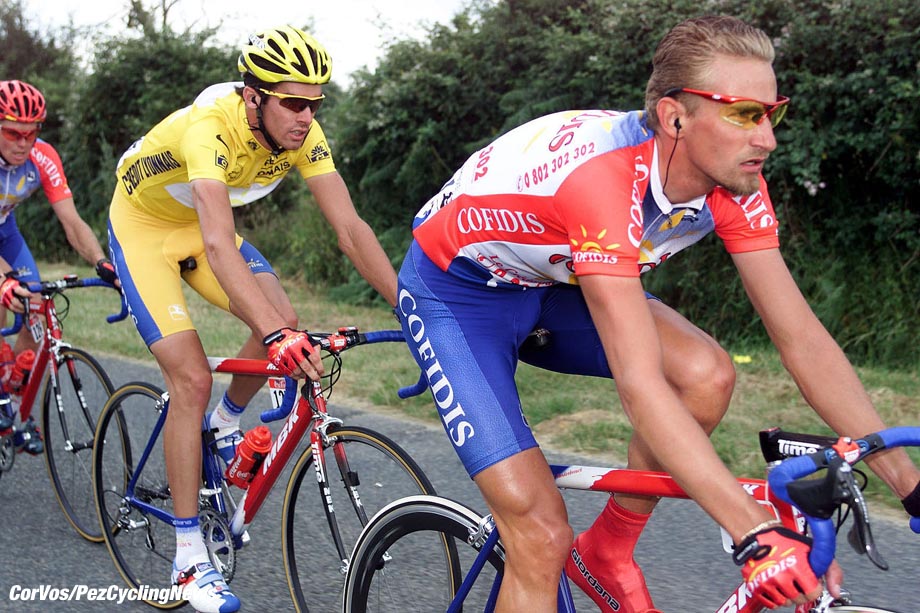 The bad times with VDB

And I have to go against the grain and say that it’s impossible to dismiss the; ‘they were all at it’ defense in one sentence. Unless you were there, part of the culture, riding the races, seeing what was going down then how do you know what you would have done?

Just like the Vietnam War, if you weren’t there then you cannot speak with authority – especially if you never actually put a leg over a bike in a professional road race during that era. It’s good to think to oneself; ‘I wouldn’t have succumbed’ but the truth is that there’s no way of knowing – especially if your contract was going to be out at the end of the year, you needed results and your room mate was showing how simple and effective it was to ‘charge’.

None of that makes it right to ‘kit up’ but the world isn’t a black and white place – and it was a decade ago he was banned when cycling was ‘in a different place.’ People and cultures do change. 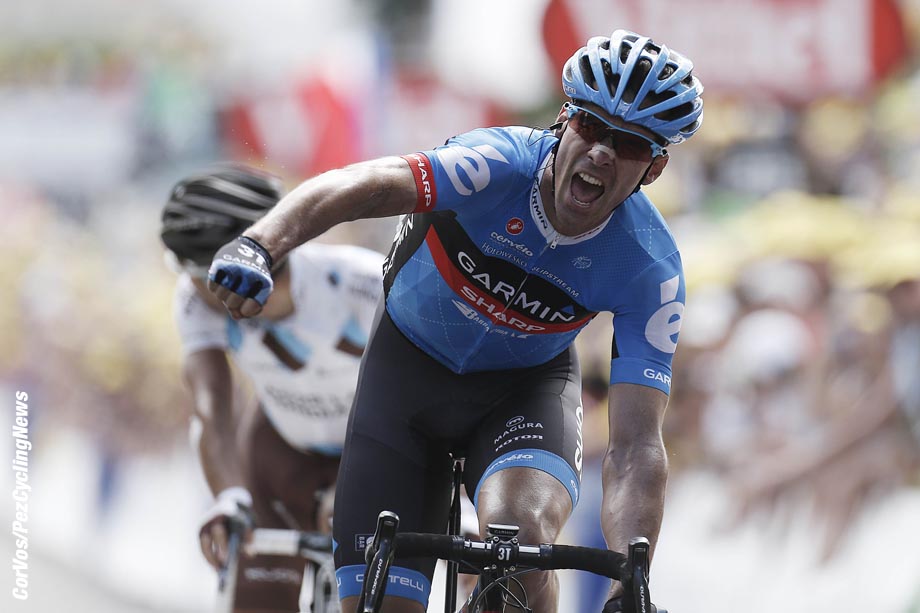 It’s easy to say that he’s only ‘born again’ because he was caught but he could have served his time, kept schtum and ‘just got on with it.’ But he chose to speak about it and therein seems to be the problem. On social media I’ve seen the ‘F’ and ‘C’ word used to describe Millar; strange but I’ve never seen these words used to describe Sean Kelly, Freddy Maertens, Eddy Merckx or Bernard Thevenet, all deities and all of whom have little to say about testing ‘positif.’ Or how about, ‘the greatest climber who ever lived’ the late Marco Pantani – a man who rarely rode a race ‘clean’ and is now an idol. 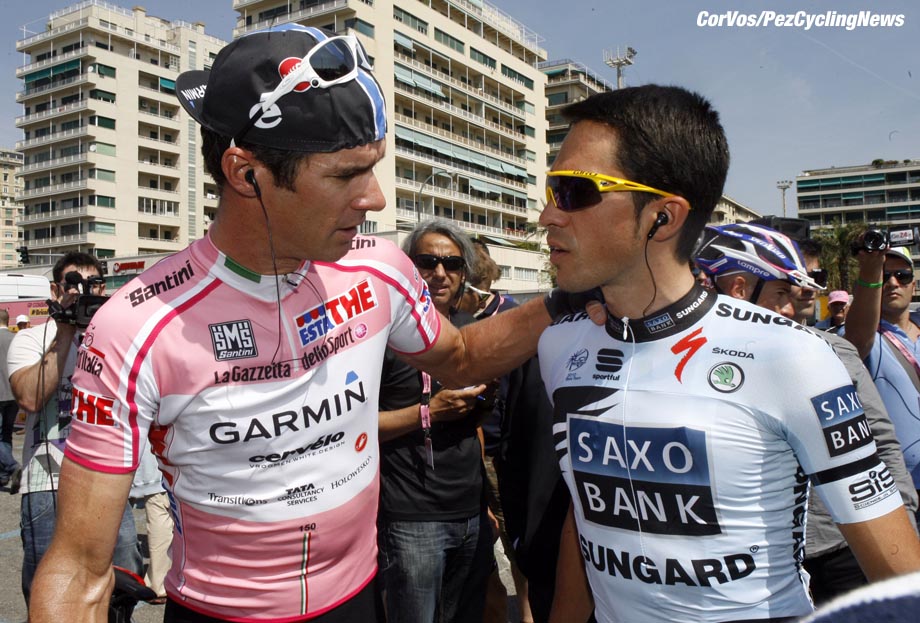 In the pink with Alberto Contador

Millar came back, spoke about it and did have the fervor of a ‘born again’ – one would have thought his stance would deserve praise but apparently not; ‘he’s only speaking out because he got caught’ is the response. Maybe so; but he did speak out and surely there are few men better placed to counsel young riders on the pitfalls of the ‘hot sauce,’ physically, mentally and financially.

And it’s not just that aspect of bike racing he’s giving advice on – remember that this is a man who has worn the leader’s jersey and won a stage in all three of the Grand Tours – we’ve spoken to the young GB riders in Tuscany and his advice is solid and well received.

Scorn has also been poured on his ‘dream team’ which he listed for CyclingNews – ‘most of them are dopers.’ But I respect his courage for saying what he actually thinks and not patronizing his readers – the ‘dopers’ were all part of the same system in that tainted era. And I respect his desire to ride and perform for Scotland in the 2010 Commonwealth Games in Delhi, not like some ‘names’ who could be mentioned; please don’t say that it was about money – the Commonwealth Games are about as relevant in Continental Cycling as snail racing. 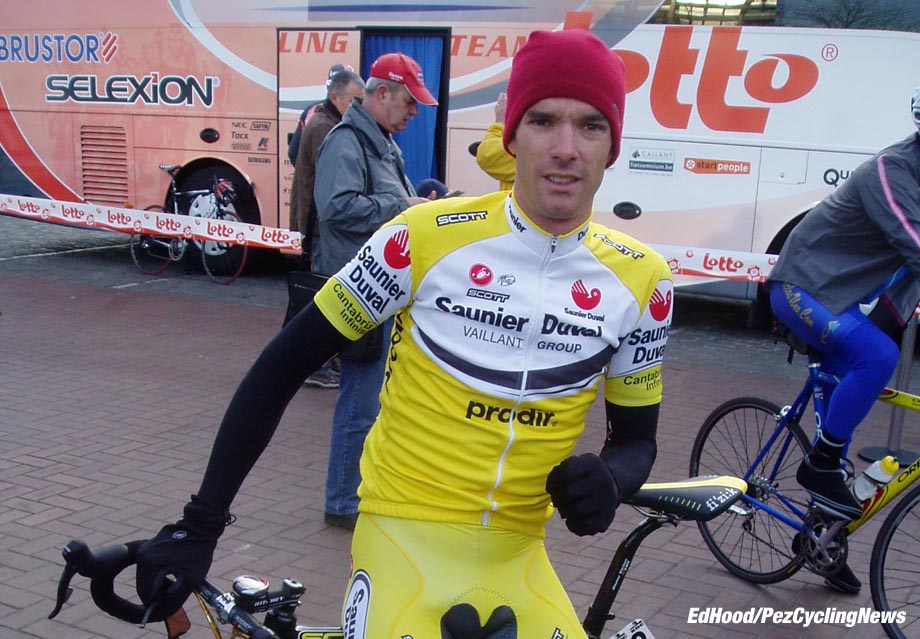 On the way back with Saunier Duval

The sport of cycling isn’t about hating or blame; it was always the people’s sport, the one which passes your door, no season tickets, no elitism, but nonetheless cutthroat and tough. When one of ours stumbles, we should help him to his feet not start looking for 4” x 2” to build the gallows.

Don’t just ‘get it off your chest,’ and hate Millar because it’s easy to do so. Ask the GB youngsters he’s involved with what they think of the man, surely that’s what really matters, now – not the events of a decade ago? 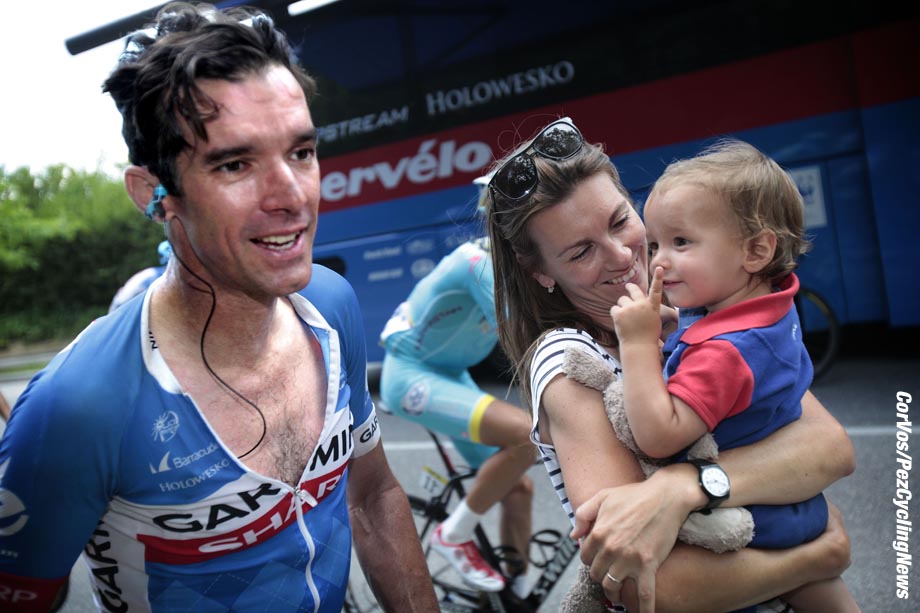 Lee’s Lowdown: Is It Millar Time?

Cervélo: “It’s simple, we do care about women”