This summer, ErgVideo travelled to France to film several new rides. Part 1
was a taste of cycling legendary Tour climbs and routes, while today’s conclusion features classic tales that fill in the background of making ERG’s ever expanding library of training videos.

– By Paul Smeulders of ErgVideo –

Rains… Pours…
The next day was scheduled for a climb of the Port de Pailhиres, another peak introduced to me by Glenn Erickson, when we rode up together in the rain, in 2001.

The remains at Chateau Peyrepetuse, a 11th century Cathar Community

We intend to climb the Port de Pailhиres from another direction, in misty fog that we all hoped would turn to sunshine. I showed everyone my receipt from the weather bureau, and they all believed me. We also hope to climb another mountain, so we truck it out to some good warm-up distance before the Pailhиres. I still have to rig the truck-cam, so I outfit the boys with cameras and let Vince lead them away. Eventually I hit the road through the Gorges de St Georges, and expect to catch up before the foot of the climb. The cold and rain gets worse. I can’t find the riders. Once again, I had underestimated their speed, and they of course missed a critical turn. Some people told me they’ve seen “quatre cyclistes portant le bleu” going in my direction. I find my way to the 2009m peak where it is rainy, icy, and really cold. Motor-cyclists who spoke English told me they came up from Ax-Les-Thermes, and no cyclists were coming down. So I turned around, hoping my boys had found their way and would be coming up the right side.

A rolling EdCam-HeadCam captures the group’s moments of indecision.

No luck. Unknown to me, the riders had taken a wrong turn, and found themselves on a different climb, not realizing it until they were well along its slopes. Vince serviced a busted wheel, and they found their way to a bar and some phones. They called a bar located part way up the Port de Pailhиres, whose owner reported he had seen my van going back and forth as if looking for someone…it must be easy to spot, for a local. He said I was on my way, although we had never spoken, and I really wasn’t, at least not for sure, to me or anyone. I guessed at the most likely place to make a wrong turn along our planned route.

Of course Vince had chosen differently, but luckily the second most likely wrong turn led everyone to the same place as the first. It was a cold, shivering reunion of hungry young riders. No usable footage for ErgVideo, but one heck of a funny R-rated-for-language blooper reel with Vince “rebalancing” a wheel with too many broken spokes, imparting his wisdom upon the SWBA team.

Here Comes Le Tour
Shoot day 3, and the Tour de France has a feed-zone at Thйzan-des-Corbiиres. It’s about 70km from Limoux. We know it will be a brief view, but we’re eager to see it live for once. No mountain passes are in our way, but I manage to find the “hard way” to get there. This time we stick together and everything runs smoothly. When the terrain flattened somewhat, Josh wasn’t working hard enough, I suppose, so he started calling out a few sign sprints, with a flair for being ambiguous and non-specific. He probably knew Ed would just sprint until someone yelled “that was it!” We stopped to see the Tour flash through, with Tommy Voeckler already in the breakaway that eventually succeeded, giving him his first TdF stage win. 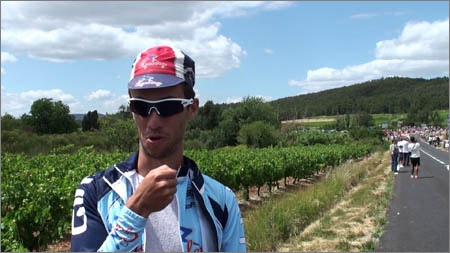 We finished the day with a spin to Carcassonne via the medieval walled town of Lagrasse. This route was so hard and so beautiful, I made a point to retrace it in the extra week I spent riding alone in the region. This ride is available as “Ride to The Tour” in our French collection. I think this one really shows the full breadth and depth of an ErgVideo experience. 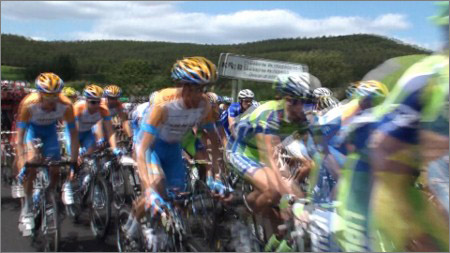 The Tour flashes by.

Ventoux x Two
We let weather dictate whether a climb of the Tourmalet or Mt. Ventoux would happen next. Sunshine was forecast for the Windy Mountain. It was a lengthy drive, but we were ably guided by our new recruit, Sandy Fulton. Sandy is a Cyclery team member who spent his whole summer racing with the Sprinter Club deNice.

Vince, feeling the need for reinforcements, called him up to Limoux and Sandy arrived quickly by train. That’s another cool French thing: good trains. The team jumped out of the van in Bйdoin, and went charging up the famous climb. What can I say? Nothing went wrong on a postcard-perfect day. It started hot, but the top was true to its name: windy and cool. The candy buffet was fully laid-out, just as I’d remembered it. Matt, at 21 the oldest of the SWBA troop, was eager to climb the mountain again, and was concerned he’d be holding up the return trip. My attitude? We’re here now. You may never get to come back. Carpй diem and all that crap. “Go down that way; turn around when you hit Maulaucиne.” I’d catch up and handle some extra filming.

It’s hard to believe the rocky peak in the distance is part of the same mountain the lead trio have been attacking for a few miles already. Indeed, Mt. Ventoux is as unrelenting as it is long.

It was a pleasure to assist Matt with something he was so eager and keen to try, and he was not at all slower when he started the second shot. The Maulaucиne ascent has fewer twists and turns, but the road is wider and much busier with cars and trucks. Despite this ascent’s superior views of the mountains to the northeast, I’d take the Bйdoin side if I had to choose. A cyclist about to crack is sometimes given away by his clothes fitting visibly looser as the day goes on, and ol’ Matt was showing the signs. At one point he told me he’s considering hopping in the van. My heart sunk as much as his surely had. I knew that if I let him quit (and I would have), the only thing he’d remember of this day, despite climbing once already, was that he didn’t climb it twice.

Like fighters, we never forget the opponent who beats us, and a mountain does it with a humiliating submission hold. It’s never “just a lucky punch”; it’s a defeat that can’t be argued nor appealed. Matt hung in, and I started moving the van ahead in progressively longer distances before stopping and waiting for him to pass, like some sort of Jedi mind trick. He caught a second wind, a view of the summit, and finished in fine style.

Matt nearing the end of his second ascent

The ascent of the team from Bйdoin is available in the painstakingly originally named “Mt.Ventoux” ErgVideo. Anything that went wrong was deferred to the drive home, and limited to a few turns, here and there, by your author.

A view that is a relief, and a tick off the bucket-list for every cyclist

The next morning was equally sunny and the boys were eager to see more mountains, with less driving. So we went back to resume our feud with the Port de Pailhиres, and claim the Plateau de Beille as well. With our collective act smoothed out, this session went without a hitch. The road of the Pailhиres gets incredibly twisty in the top third of the climb, and it inspired Sandy, Matt, and Ed to dish out a few attacks. It measures higher than the Ventoux, and has appeared in the Tour de France 3 times. This could be the most beautiful climb I’ve seen so far, and the ErgVideo is truly spectacular. A dash down the other side, a quick lunch with requisite ribbing and reviews, and everyone set-off along the highway toward the Plateau de Beille.

This climb is reasonably new to the Tour, and has the distinction that those who have won this climb, have gone on the win that Tour overall. Lance himself did it twice. Once again, the boys put on a great ErgVideo show, with Matt and Ed making sure the Canuck doesn’t steal the points at the top this time. This ErgVideo, if you need to ask, is called “Plateau de Beille“. While I’m glad we smoothed out the kinks in our production machine, I cannot help but notice tha it left me with less to write about. In my next article, I’ll review our shoot in Mallorca, Spain. I should have plenty to say about each and every ride.

Matt, Ed and Sandy gutting out a switchback on the Pailhиres

I want to express my thanks to riders Ed, Josh, Matt, Sandy and Vince for helping to make some of the best ErgVideos yet; to David their coach for not screaming at me when I handed back three very tired and worn out athletes; to Chris for the first class accommodations and route advice; to his assistant Elnat for putting the huge dent in the van before I started driving it (takes the pressure off), and to the lovely Eve, my favorite waitress at Le Grand Cafй de Limoux, in the old town square. Tell her Paul the Canadian-bike-video-guy sent ya.

• WIN ERGVIDEOS: As part of the grand prize of the CompuTrainer Contest: – ENTER HERE
• If you haven’t already, check out our reviews of ErgVideo’s awesome collection of training dvds, and see their website at: ErgVideo.com

Six, Six, Six: The Number Of The Race!