PEZ’s Nate King has raced professionally around the world but he’d never ridden on classic steel, strapped on some toeclips and got those downtube shifters moving on a machine from the past. Eroica California was the perfect place to do it and it’s where Nate rediscovered just how beautiful riding can be.

“Eroica, to me, is not a ride steeped in the past. It is about finding meaning in the present.” 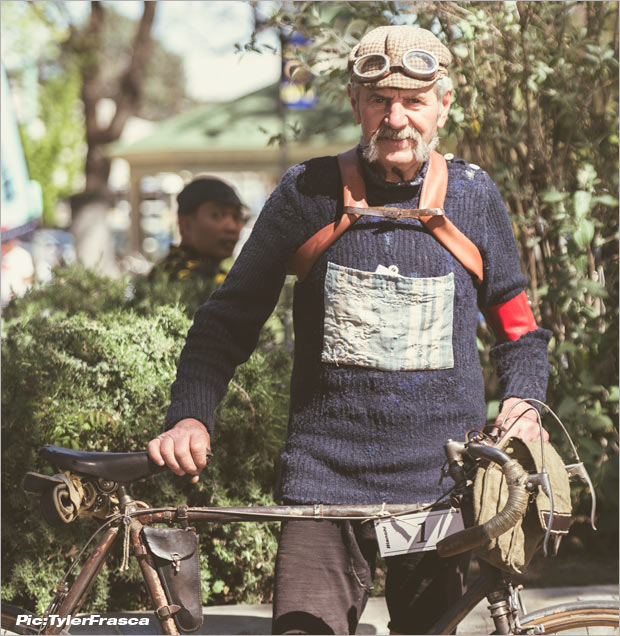 I arrived at Eroica California with trepidation. Neck-deep in the Redlands Bicycle Classic for the past week with a women’s squad staying at my house, the last thing on my mind was a 130-mile long vintage bicycle ride in the Paso Robles wine country interspersed into my training centered on watts, suffering, starvation, and interval sessions. In fact, I had thoughts of cancelling in the days leading up to the event. Car trouble, uncertainty about having a bike to ride that fit the event’s required pre-1987 vintage, interrupted training, and a general sense of personal discombobulation had me discouraged.

And I’m so happy I went anyway. 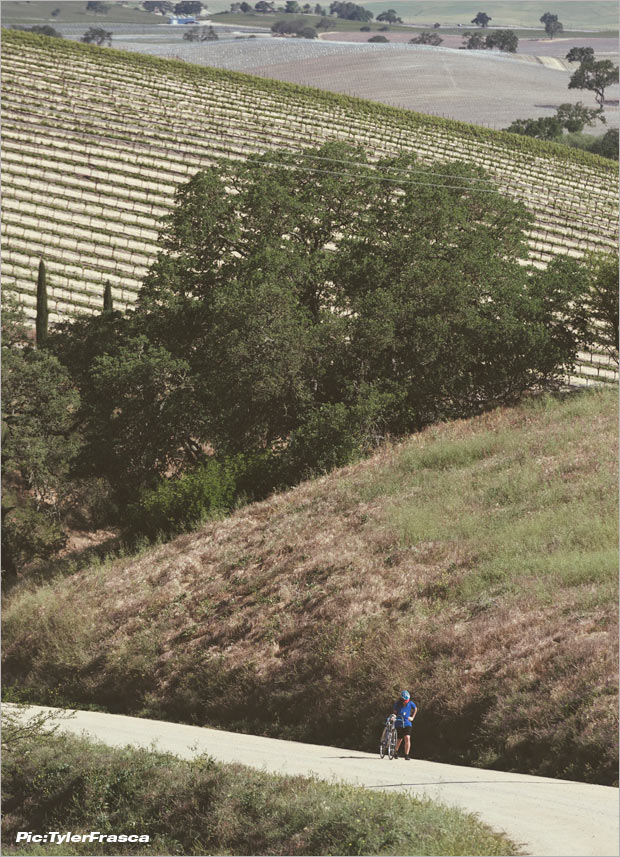 Eroica California is the American spin-off of its Italian forbear, L’Eroica, which takes place on the white gravel roads of the Chianti region in Tuscany, and has been running since 1997. One of five global Eroica events for 2015, Eroica California landed in a place not far off from the heart of Italian wine country, the vineyards and rolling hills of coastal San Luis Obispo County. The spirit of Eroica is all things aged (again, before 1987) and cycling. 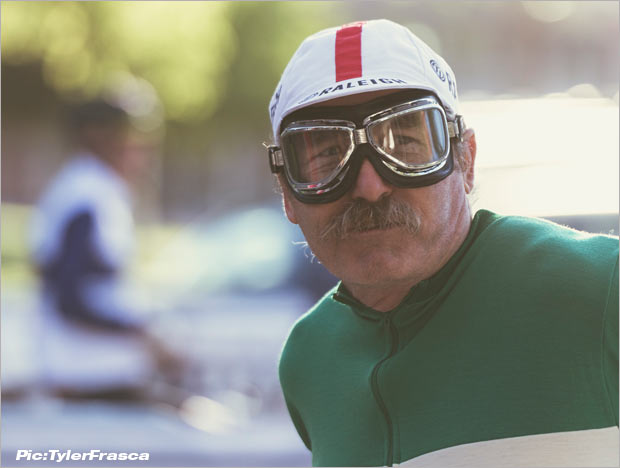 Clothing (wool jerseys and leather chamois are the norm), equipment (toeclips only, non-indexed downtube shifters, and handbuilt wheels), food (rest stop highlights included wine and foccacia), and riding (your bike is heavy, and your legs will be too). The Californian variation offered three routes, at 40, 65, and 123-mile distances, with heavy gravel components to each. Given my penchant for suffering and bad decisions, I opted for the longest on a bicycle I wouldn’t have a chance to ride until the morning of the adventure after car trouble dogged my arrival in Paso Robles. 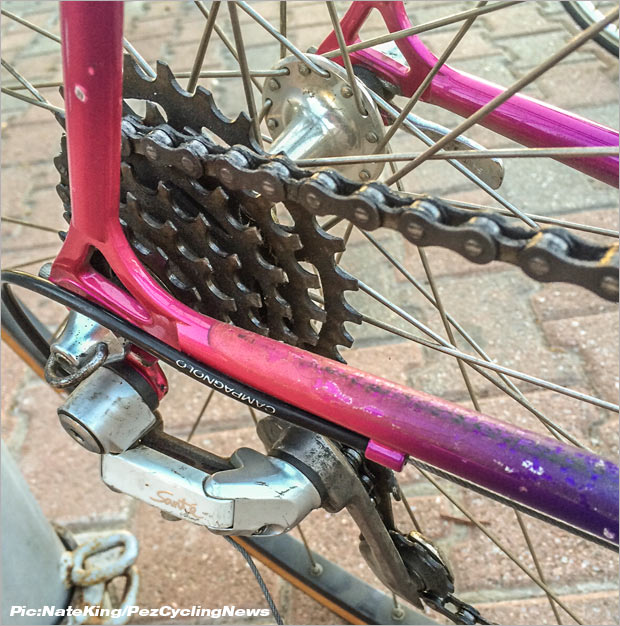 The rest of the press were on borrowed bikes, though they’d obviously put more advance planning into their selections (Neil Shirley, former pro and editor at Road Bike Action managed to wrangle a gorgeous 1972 Colnago Super loaner from The Pro’s Closet in Boulder). Meanwhile, Eroica’s organizers graciously found me something at the last minute – a custom-built assemblage from San Francisco framebuilder Ed Litton. The bike was built for Ed’s wife, and the apropos inscription on the toptube read “Mrs. Litton”. In short, I was to spend eight hours riding Mrs. Litton, which fit me shockingly well, save for one crucial bit I’d overlooked – the toeclips. 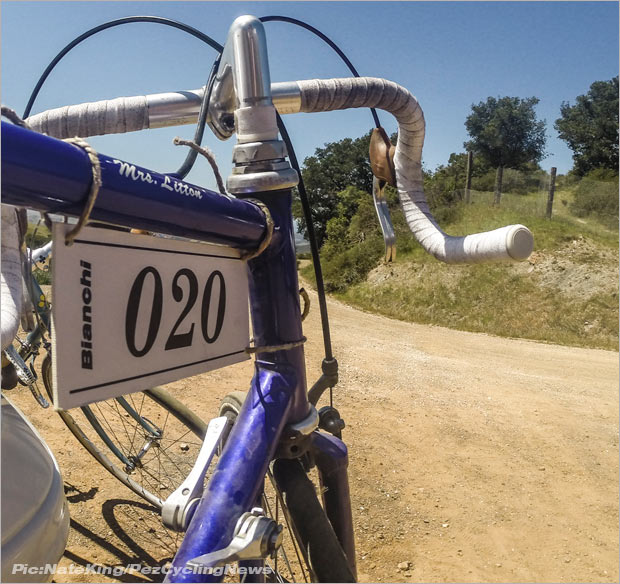 My naivete was laid bare with the discovery that toeclips are, in fact, sized by foot. My 6’1 frame rides on size-12 flippers, and something tells me Mrs. Litton herself has far smaller feet. I looked forward to several hours experiencing the ancient practice of footbinding. The bike featured a smattering of Campagnolo and Shimano components from the mid-80s, friction shifting, mismatched wheels, and a relatively forgiving 5-speed freewheel with a 39t chainring and 25t big cog. A luxury, compared to Neil’s 42-21 low combination. 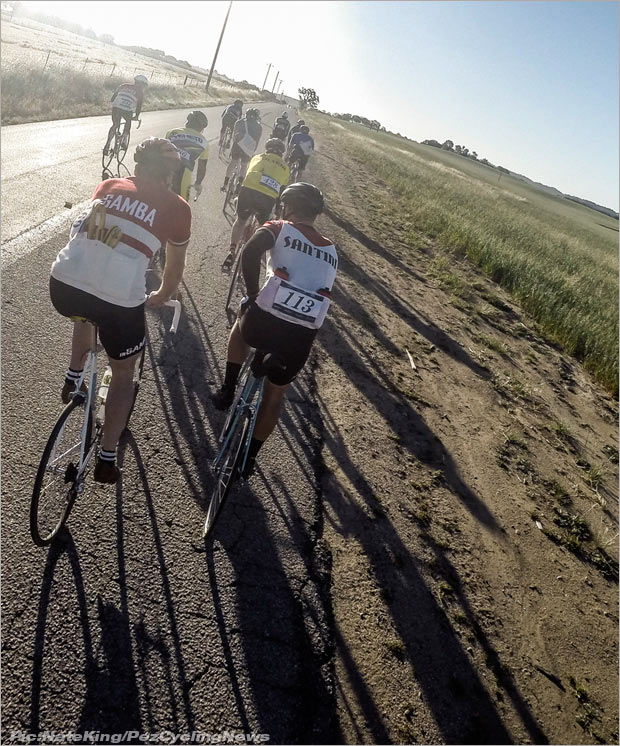 Our crew of 15 or so set off at 7:30AM into the brisk morning, and I began getting acquainted with Mrs. Litton. I was born the same year as the cutoff for bikes (1987), and my familiarity with things like toeclips and friction shifters is vague at best. The March of Progress™ has left me unappreciative of things like shift ramps, indexing, modern gear ratios, stopping power, ergonomic brake hoods, and wide tires. We approached the first winery rest stop, a mere ten miles into our journey, to be greeted by jovial vineyard staff. 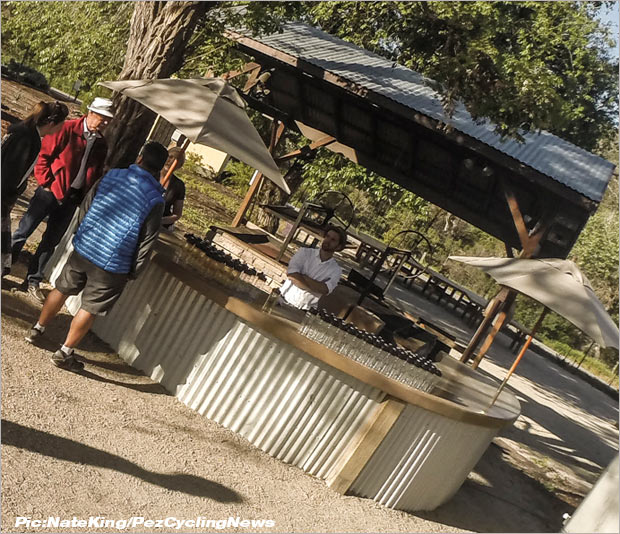 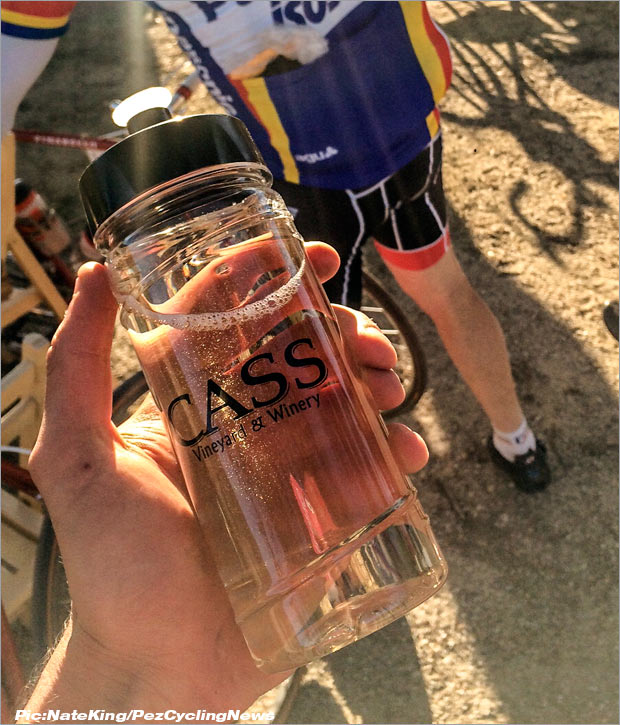 This would become a theme. At 8 AM in the morning, we were offered bidons. Water or vino, you choose. This would also become a theme. We were offered gourmet chicken salad wraps. This would also become a theme. To say this was the best-supported ride I’ve been party to is an understatement. One of my “vintage” tires disintegrated on a steep descent 70 some-odd miles in. I was picked up by a friendly local, and at the next sag stop 5 miles down the hill a fully-equipped mechanic had a litany of tires to rescue myself and Mrs. Litton while I stuffed pastries into my maw. 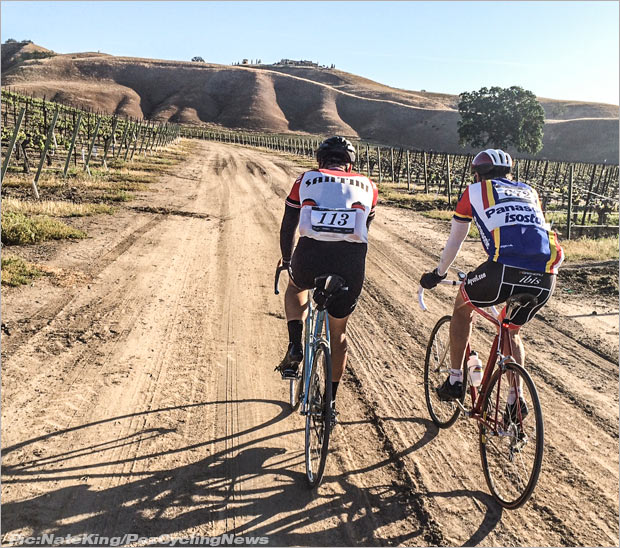 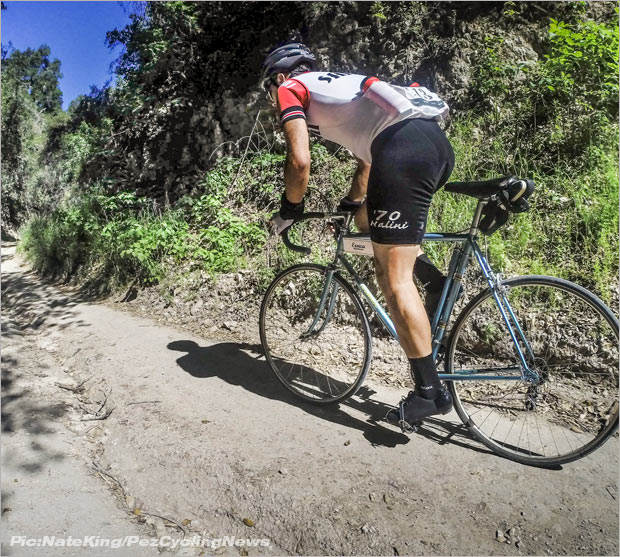 For the first 20 miles, there was a fierce struggle between the bike and I, as I attempted to learn the art of finding gears, anticipating my shifting needs ahead of time, escaping/entering my tiny pedals, skittering through gravel, and riding mostly in the drops. Finally, with a quick tightening of cables, we began to groove. The experience evolved from something frustrating into deep liberation. The requirement to tune into the terrain, into my riding style, and into the bike itself brought the journey and my companions to the forefront. My shifts became methodical, calculated, and planned, much like shooting with film after several years with a digital camera. 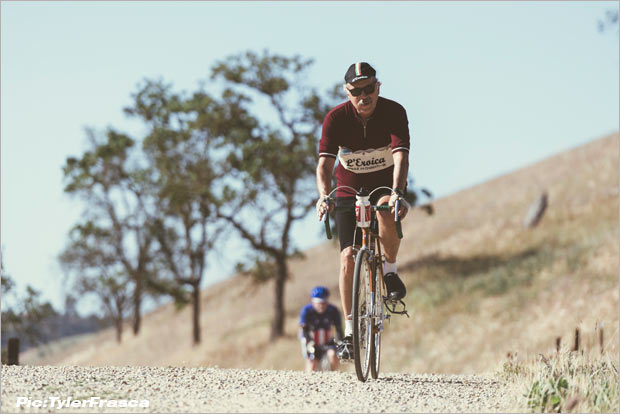 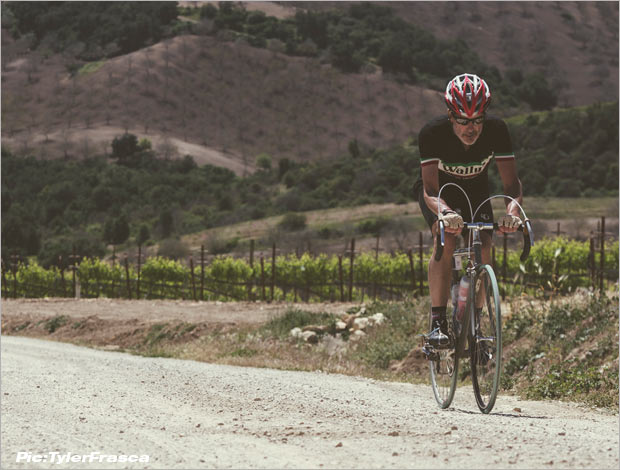 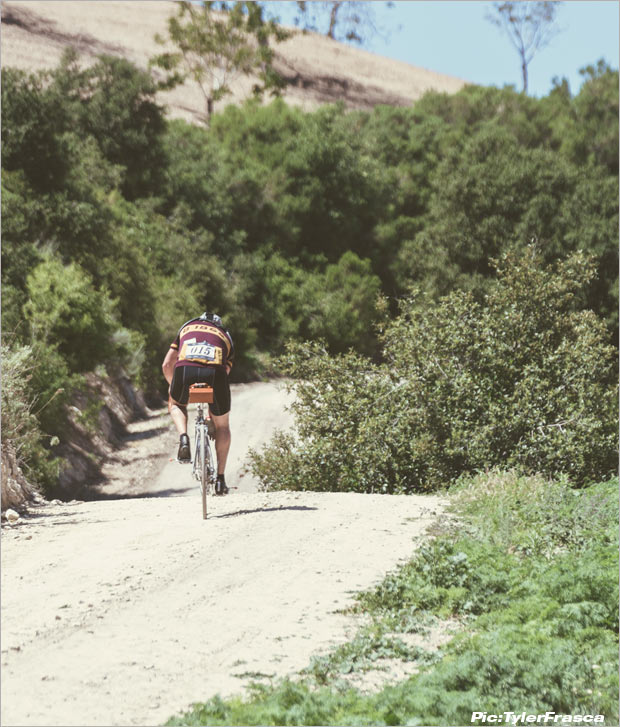 There was no powermeter to tell me if I was riding at the right intensity. No computer to tell me how fast I was going. No quick downshift when I hit a steep pitch. No headphones blaring EDM. There was no training. There was riding, and there was conversation. There was railing dirt corners with a shit-eating grin and rocketing over rollers with a feeling akin to driving an old car hard. I wasn’t going anywhere quickly, but the feeling of pushing the bike to its limit was like rallying the old Porsche I’d had in college. I’d spent six months in a deep, dark solitary hole that concerned itself only with watts, ride time, acronyms like TSS, and riding mostly alone, where I’d forgotten why I was riding. Why I started riding. Why I still ride. 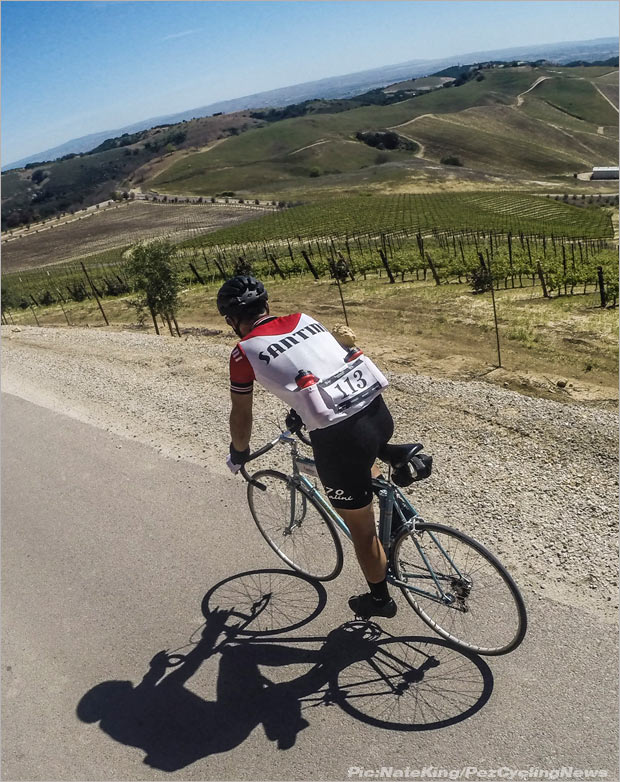 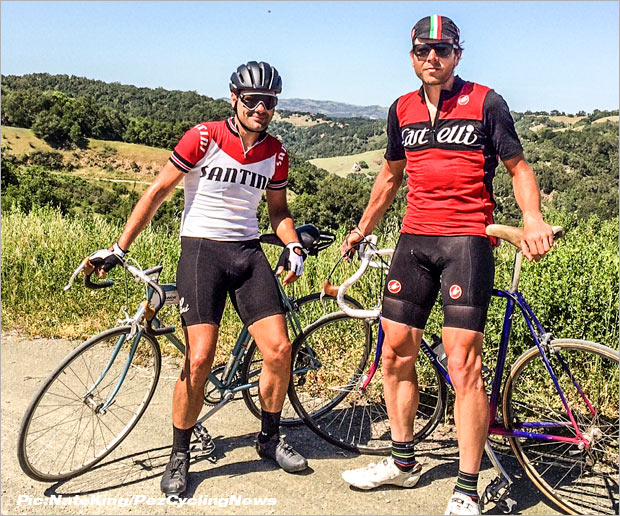 Nate and his new best bud Neil (on left).

Mr. Shirley and I deviated from our group, forging ahead at the fast-but-smooth pace that only years of dedicated racing and training can develop. I’d never had a real opportunity to ride with Neil, never had much of a chance to talk with him. Little did I know, he’d been raised in the area, and we spent the next six hours revisiting the haunts of his youth, riding past his schools on the roads he grew up riding. We talked racing, the selfishness of it, the sacrifice it requires, and how different what we were doing was from the duress of road racing. Racing is about getting to the finish as quickly as possible. Eroica is about experiencing everything before the end and sharing it with other people. By the end of the ride, I felt like I could count Neil as a good friend instead of a vague acquaintance, something far more valuable than standing on the podium of a bike-practicing competition. 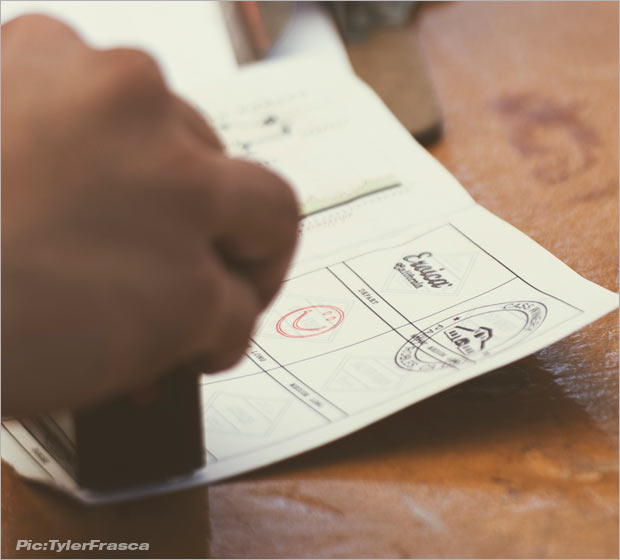 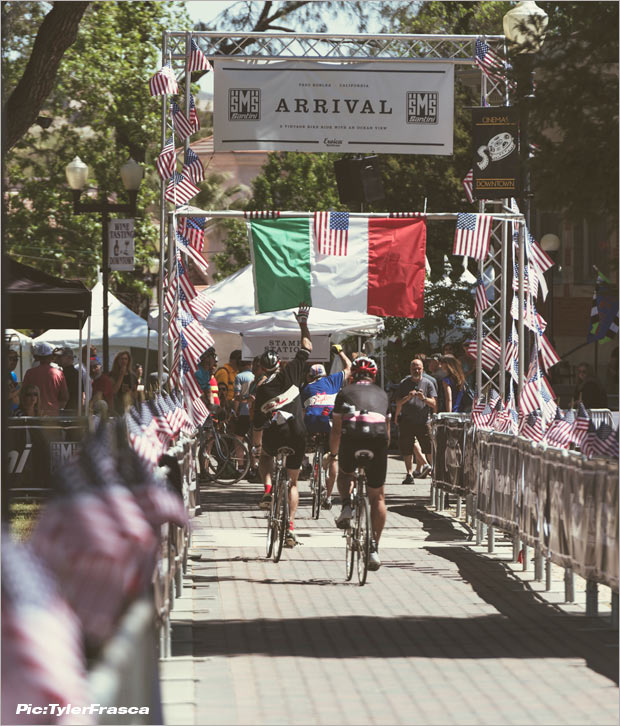 Eroica is so much greater than vintage bikes. So much more than older gentlemen geeking out on slight variances in fork crown pantograph styles. On the surface, Eroica looks slightly mundane, the mash-up of stamp collection and luddite cycling, a spectacle of limited appeal. But Eroica, to me, is not a ride steeped in the past. It is about finding meaning in the present.

Shelley Olds Back To Racing After Injury