A Day In Spain With Etixx – Quick-Step

Etixx – Quick-Step, the most ‘winningest’ team in the pro peloton for 2015 was in Spain for their January training camp and PEZ-man, Alastair Hamilton, received his invitation for another fun day. Chasing WorldTour riders for photos and interviews is always enjoyable, throw in a top class lunch and Al will be there. This is his day with the Top Team:

Team media days have this feeling of déjà vu, or Groundhog Day, but a morning spent with Alessandro Tegner, the Communication and P.R. Manager of the Etixx – Quick-Step team is never dull and never a repeat performance of the previous year. The Spanish weather also played an enormous part in the fun, a perfect sunny day with not a gust of wind, not even enough to disturb the palm trees next to the Sol y Mar hotel on the beach in Calpe. 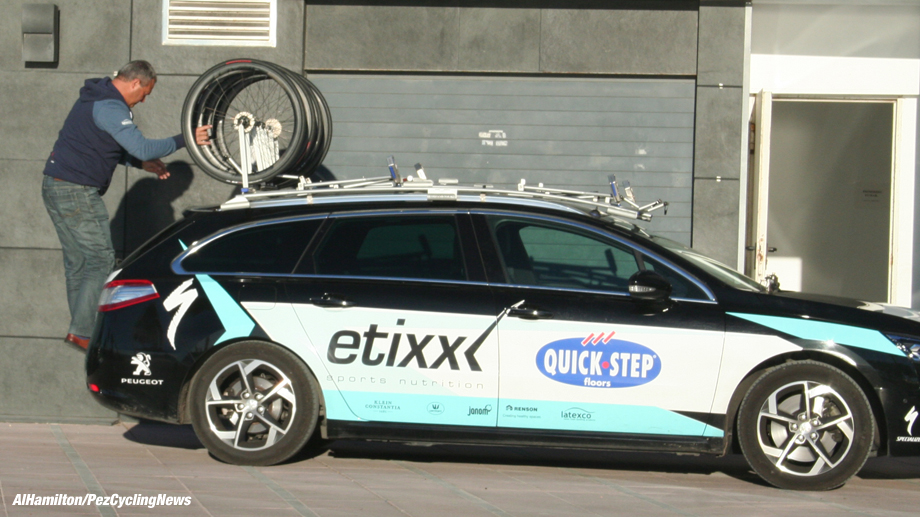 Another day on the road

My day started with the short drive to the coast and as usual at this time of year the road was full of groups of cyclists getting an early start to their day, most heading away from the coast towards the hills. Drivers here are quite used to this, you might be behind a WorldTour team or a ragged group of Dutch pensioners, but they are all given their space. It’s in the summer months you have to watch out for the tourists in hire cars and when the Vuelta a España hits these roads in September and it is total shut-down, the holiday makers do get a little annoyed when they can’t drive from their rented chalet to the beach, but that’s a long way off yet.

The Etixx – Quick – Step team hotel, the Sol y Mar, is on the beach in the center of Calpe, it is quite far from the Hotel Diamante where most teams stay for winter training. Very nice hotel, but not much room for the trucks, they have to sit at the front of the hotel next to the beach. No big car park here. 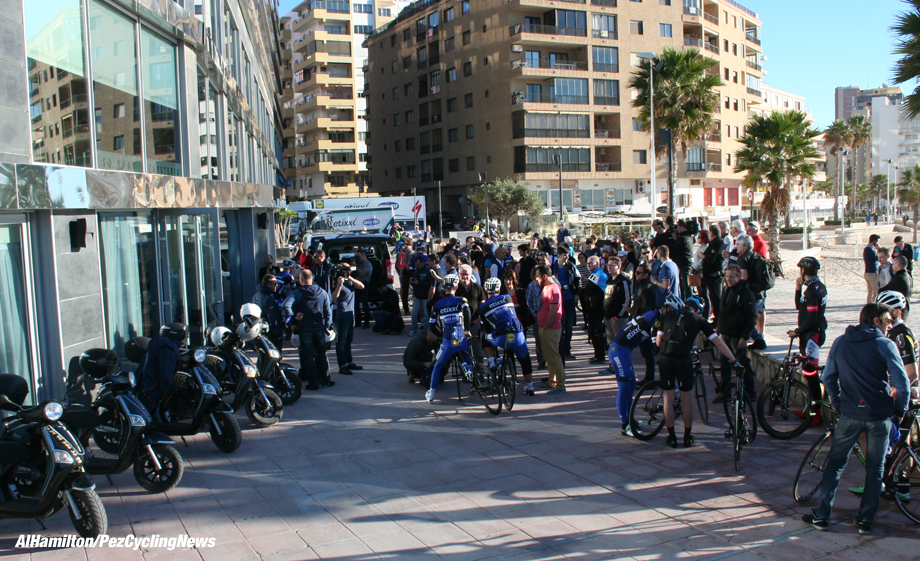 The team get quite a crowd to see them off

The team staff were getting the cars and people-carriers ready for the ride, they also had scooters for the photographers, TV and press. The ‘motos’ would be piloted by some of the DS’s, but unlike previous years, they didn’t freeze on the ride. 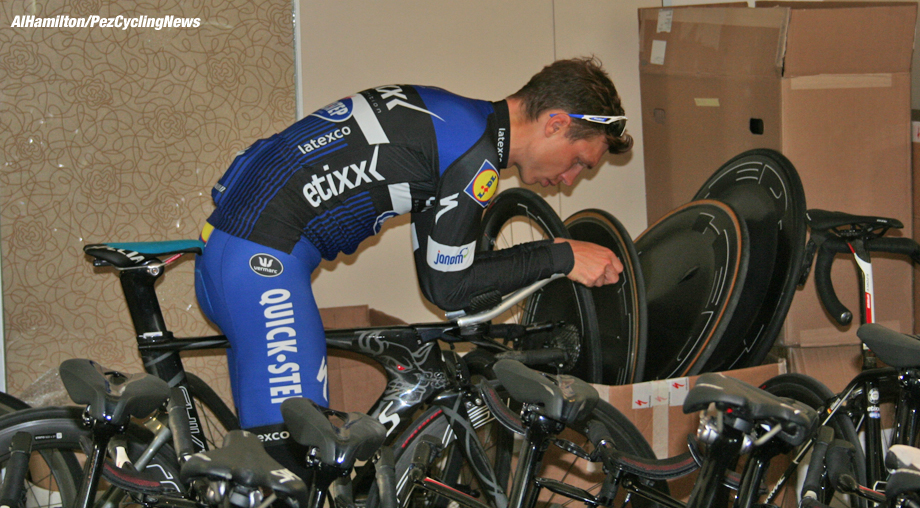 Inside the hotel, riders were getting ready, but in one corner Tony Martin was playing with his time trial position. He has changed from his arms being quite stretched to a more bent elbow position, but he did say later it was still ‘work in progress’ and far from the finished article. 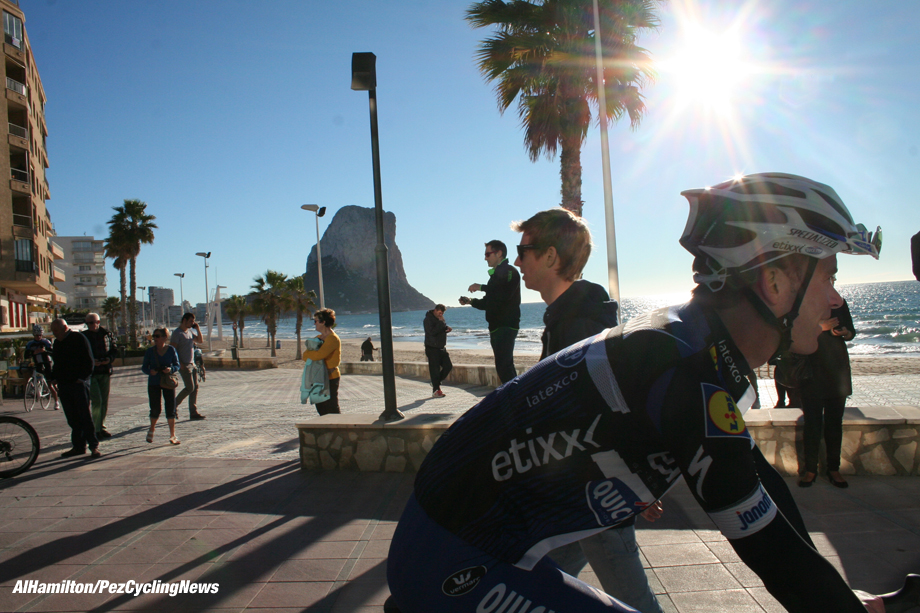 Iljo Keisse looking forward to an easy day in the sun 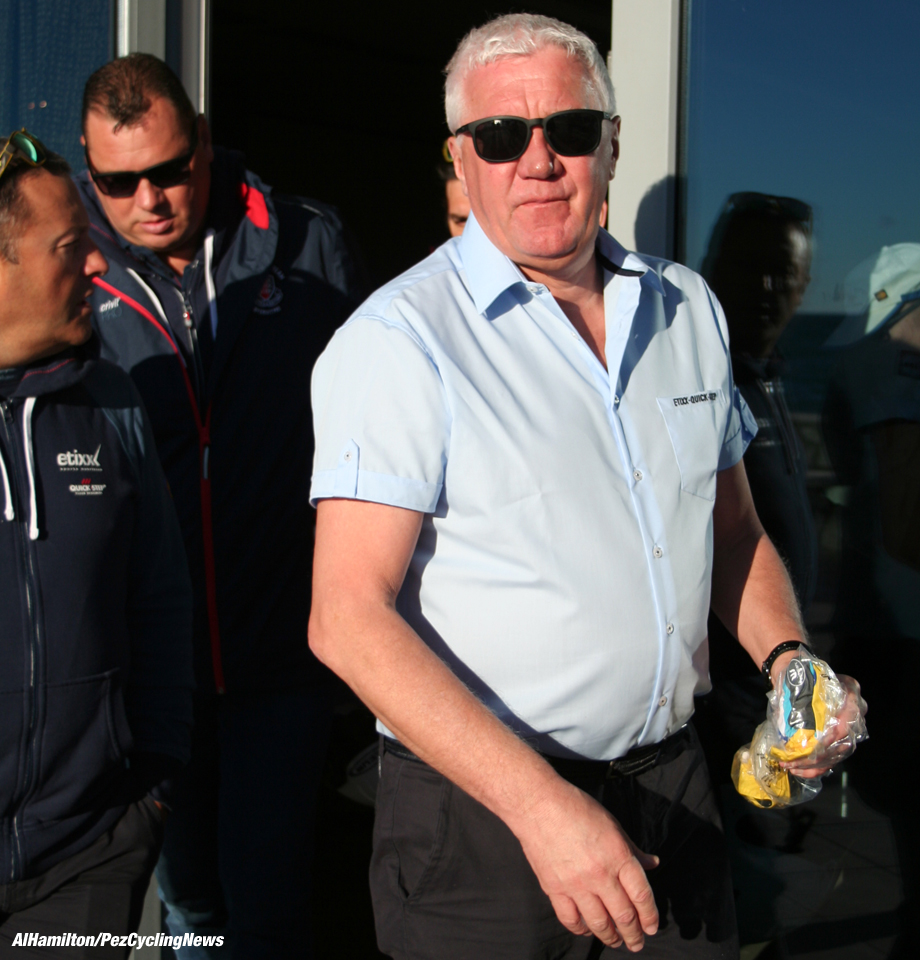 The boss, Patrick Lefevere was in good humor as was Iljo Keisse. Iljo was looking forward to an easier ride today as the previous day had been mammoth. But that was what he was here for and today was warmer and with no wind. 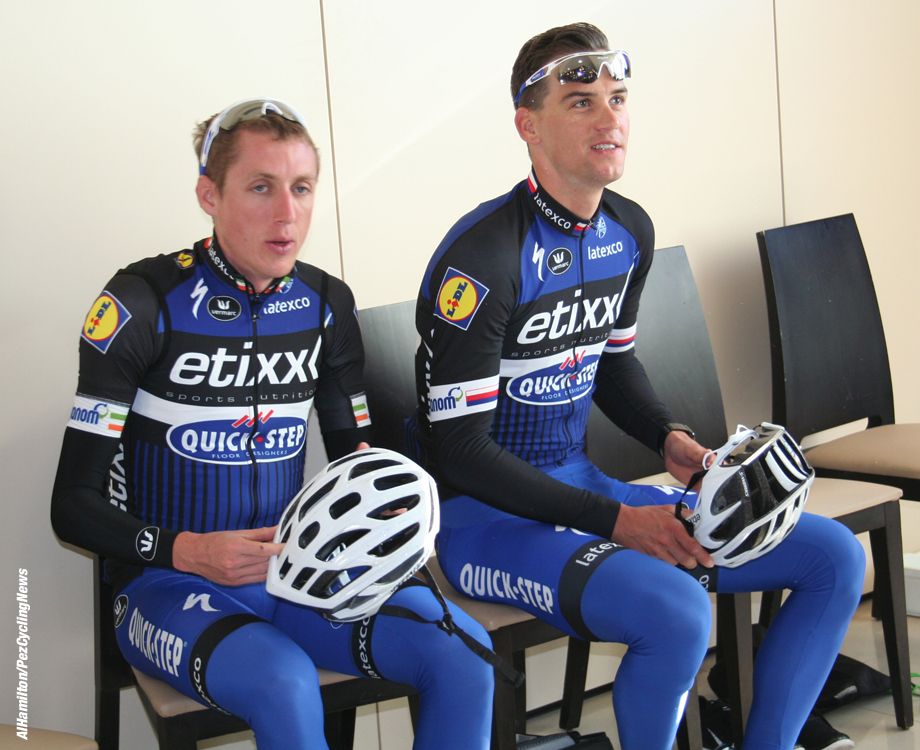 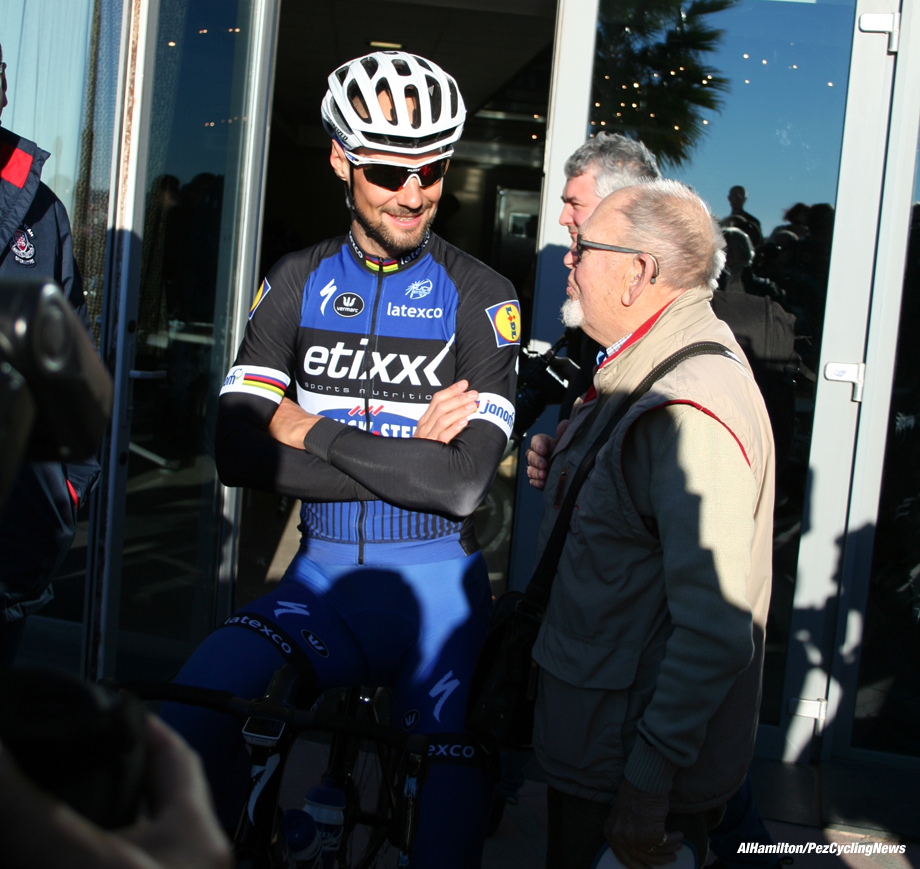 Tom always has time for his fans

Zdenek Stybar was his usual happy self along with the two ‘new boys’ on the team; Dan Martin and Marcel Kittel. There is one thing you can bet on and that is that Tom Boonen is still the biggest draw for the fans, old and young, male and female, but mostly the older females! There are many Belgians living in Calpe, some all year round, but a lot just to get away from the Flemish winter. So everyday as the team get ready to leave there is a large crowd to see ‘Tommeke’ off on his training ride. Tony and Dan Martin had their fans too and they also had to run the gauntlet of the press. The young development team were also in the hotel, not a bad line-up; World and National champs. 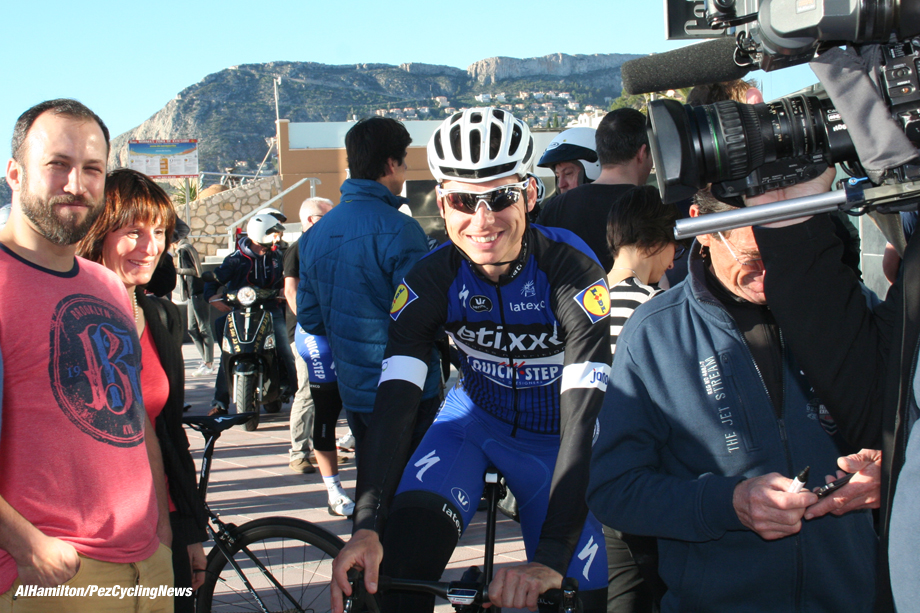 Happy to be training 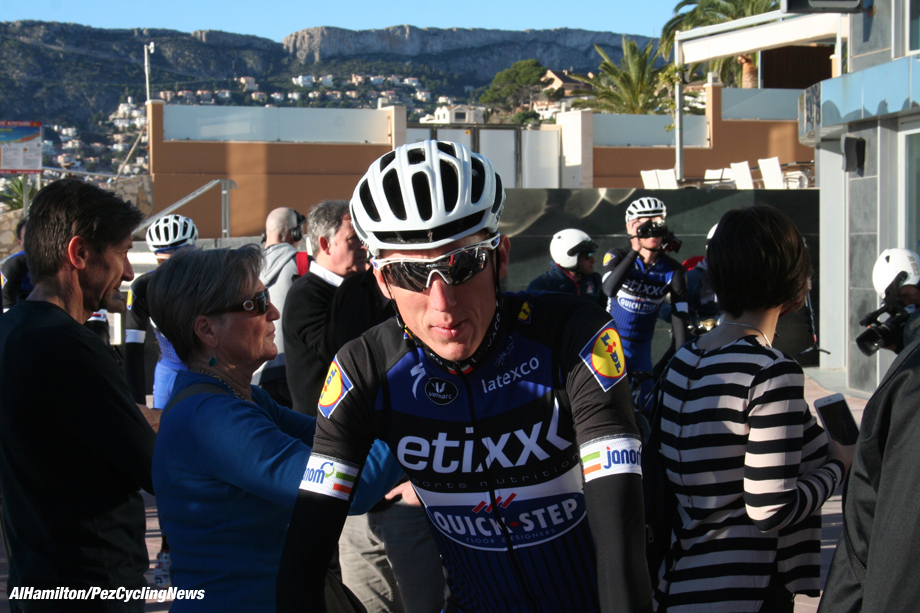 New team and a new start for Dan Martin 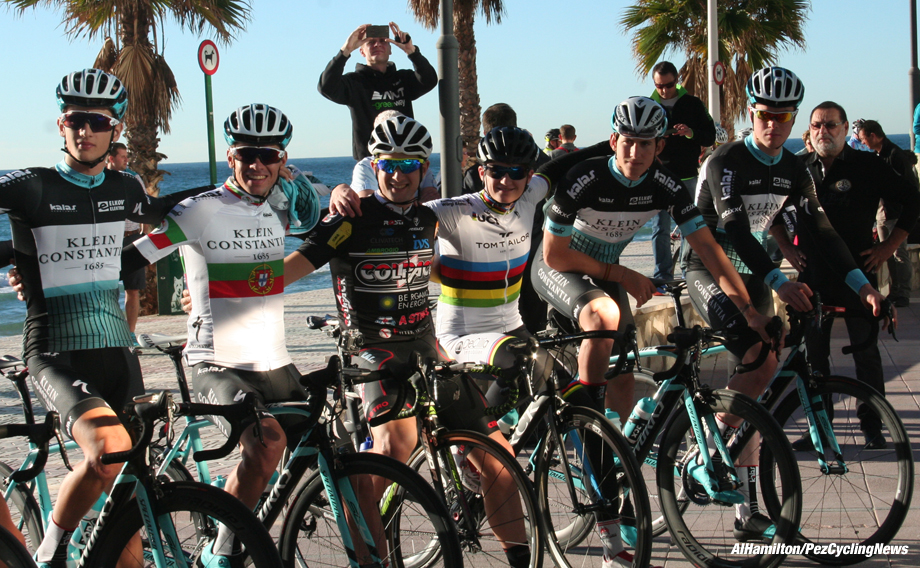 Out on the road it was the usual plan of getting past the riders (and motos), jumping out of the team car, getting as many different shots before jumping back in again, and then repeating this half a dozen times. The group I was with was good mix of Belgian TV crew and with Alessandro looking after us, it was laugh a minute. 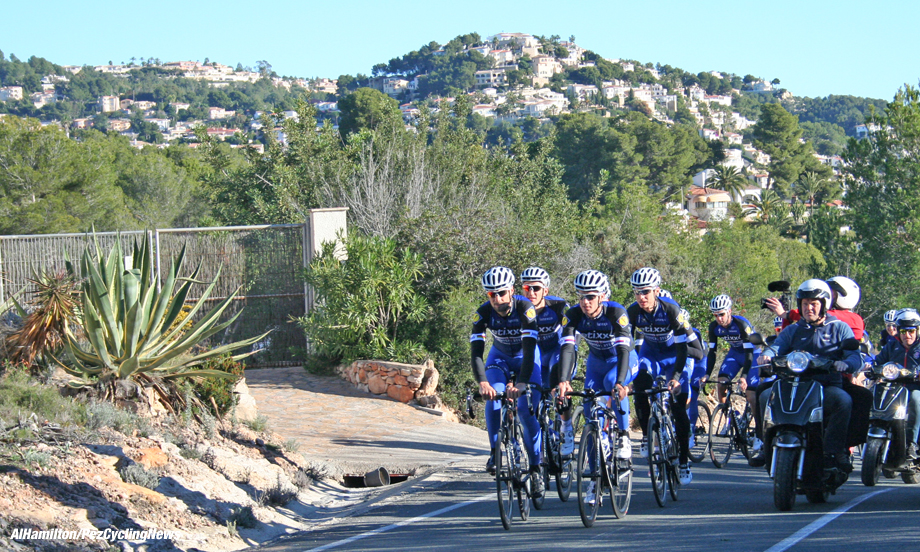 The climb of the day 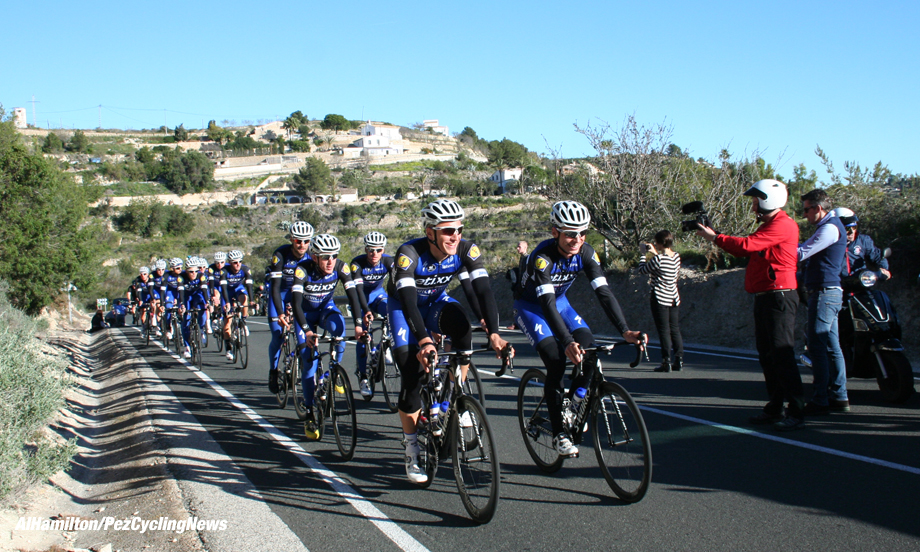 I had to ask if his job was any easier now that Mark Cavendish had moved on? “Not any easier, different.” He still has many riders to look after and now with Kittel there are more German press interest, although with Tony Martin there was quite a lot previously. 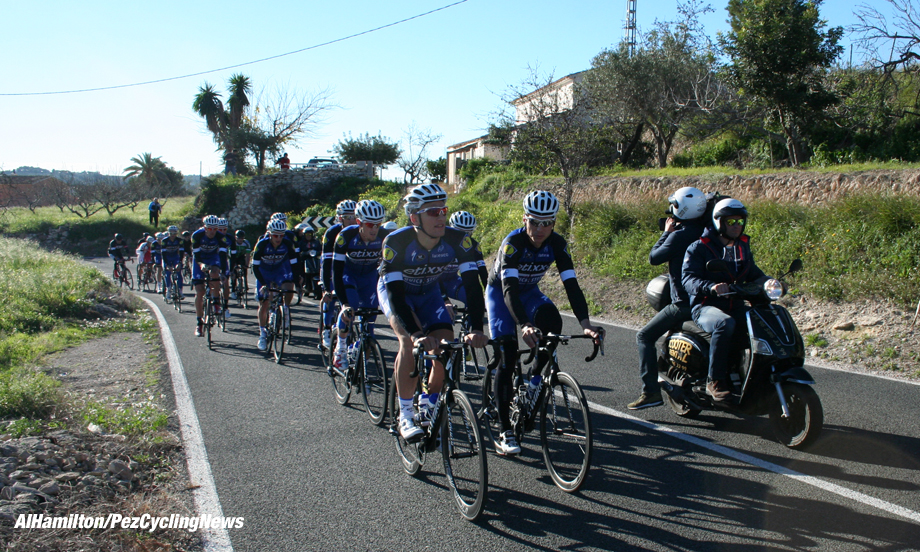 The two Germans still on the front 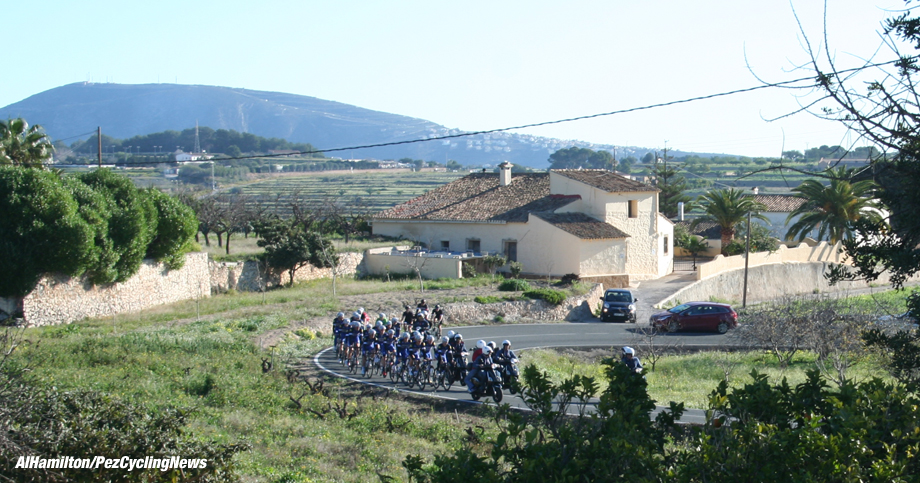 The Cumbre del Sol in the distance

The route took us up the coast before heading inland to take in a popular climb for photos, from here you can see the climb of the Cumbre del Sol that was used in the Vuelta a España last year. No one wanted to go there today. 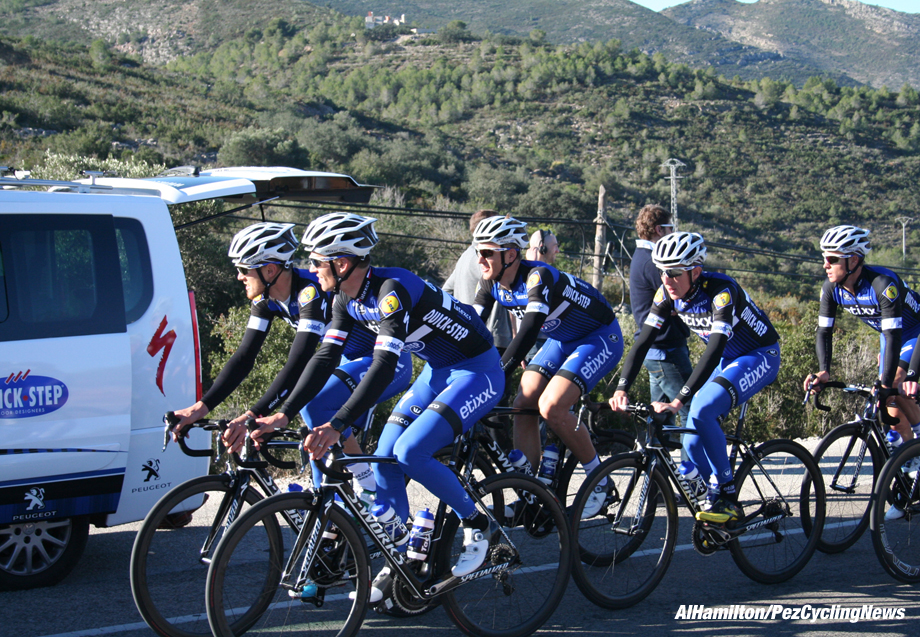 From there we snaked our way inland for more shots of the lads. At this point Tony Martin wanted to try his new TT position on the road. It looked good, but as he said later in the interviews, “I’m not finished yet” so more experiments to come. 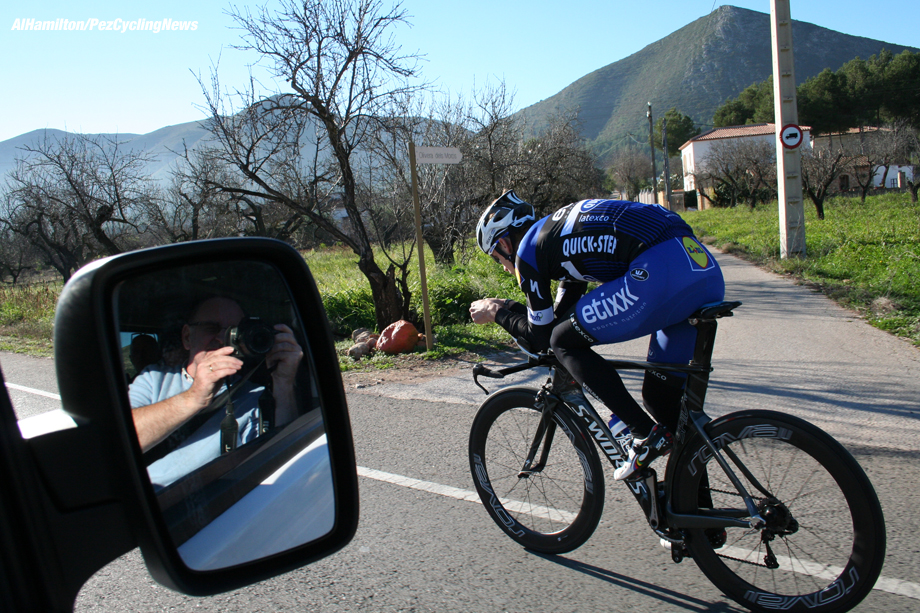 Back to the hotel for lunch and what a very nice lunch it was. Unlike at the BMC media day, we were not given 15.5% red wine, so with clear heads the press could do our work. Not sure which I preferred as the wine was good, but work has to be done. 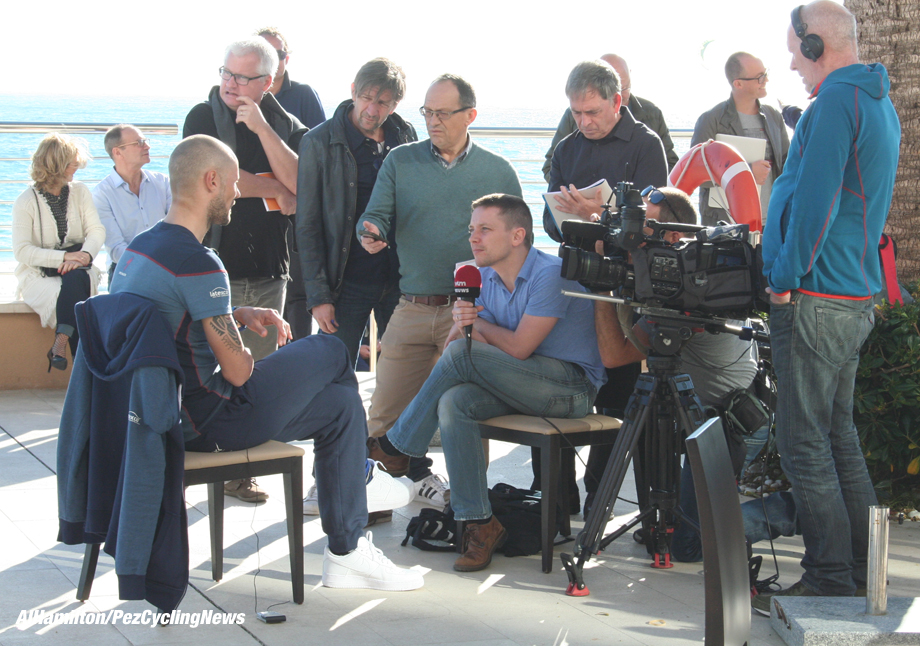 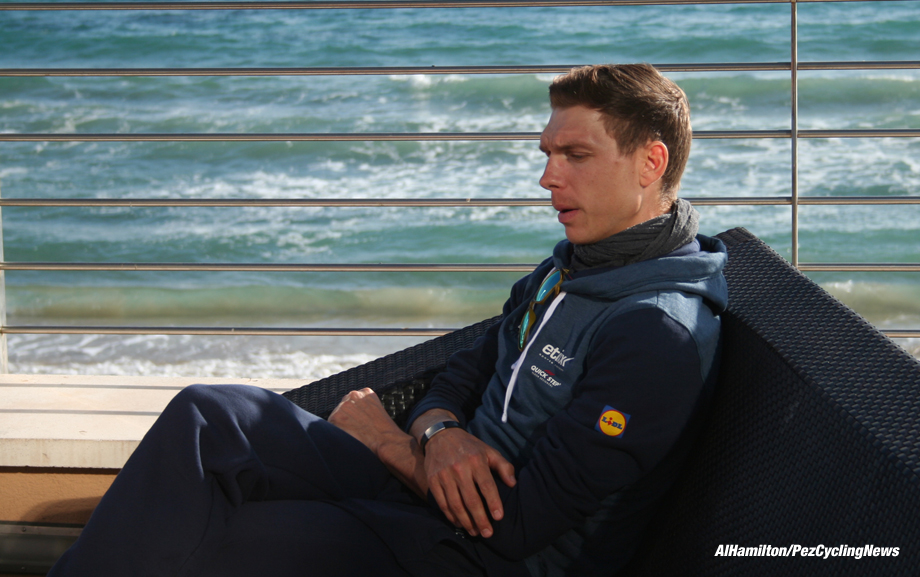 Group interviews with Tom Boonen, Marcel Kittel, Tony Martin and Dan Martin were arranged between TV work and any other riders or members of staff you wanted to talk to could be grabbed, between coffee and cakes of course. Before the interviews the main men behind the team had their say. Patrick Lefevere introduced Davy De Vlieger of Etixx, Paul De Cock of Quick-Step and for the new team sponsor, Lidl, Joroen Bal. All, of course were happy with the 54 wins in 2015 and were looking forward to more in 2016. 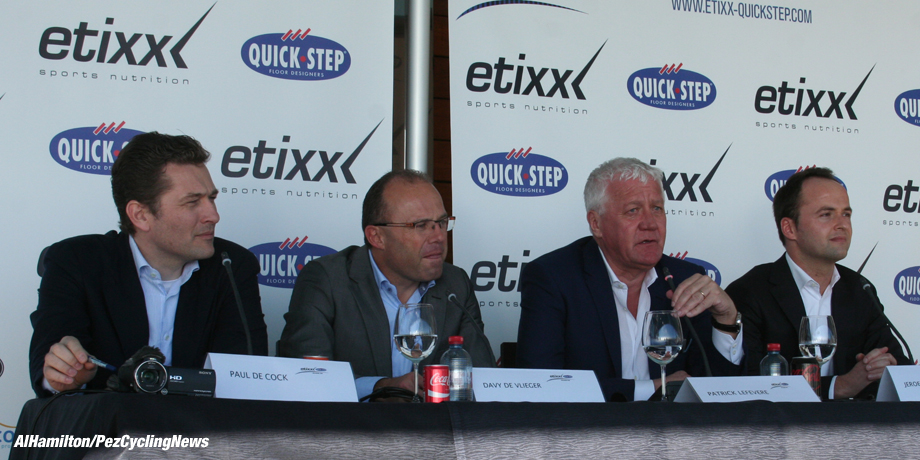 The men behind the best team

Surprise guest was 2001 Vuelta a España winner Ángel Casero, he is the organizer of the reinstated Volta a la Comunitat Valenciana which will take place this February with the participation of the Etixx – Quick-Step team. 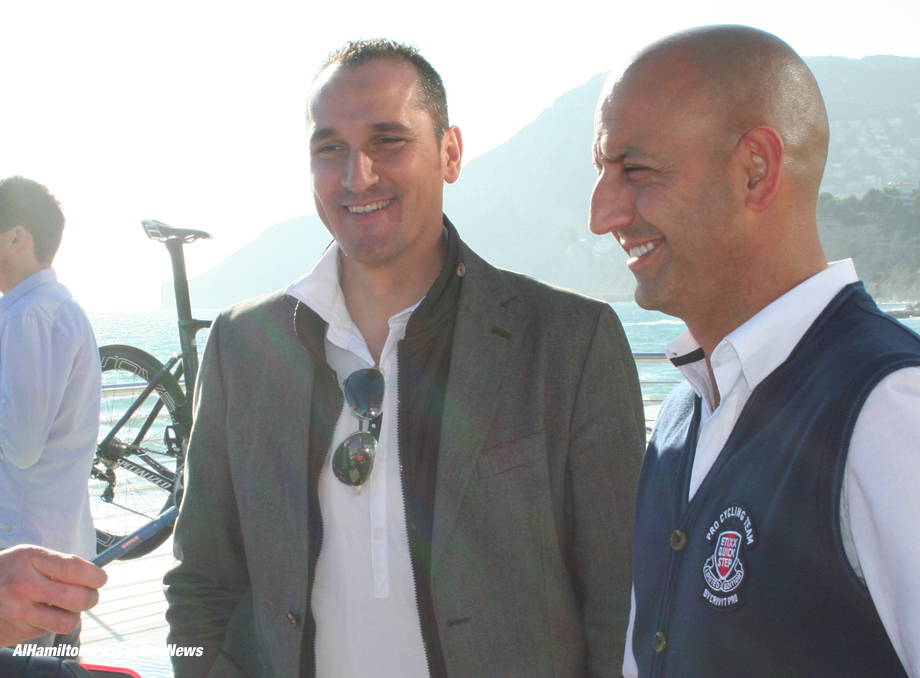 Interviews over and it was time to go home, but as I gave a last good-bye to Alessandro, I could see someone working on the handlebars of a bike in the mechanics area on the ground floor of the hotel. Yes, it was Tony Martin, a perfectionist at work. 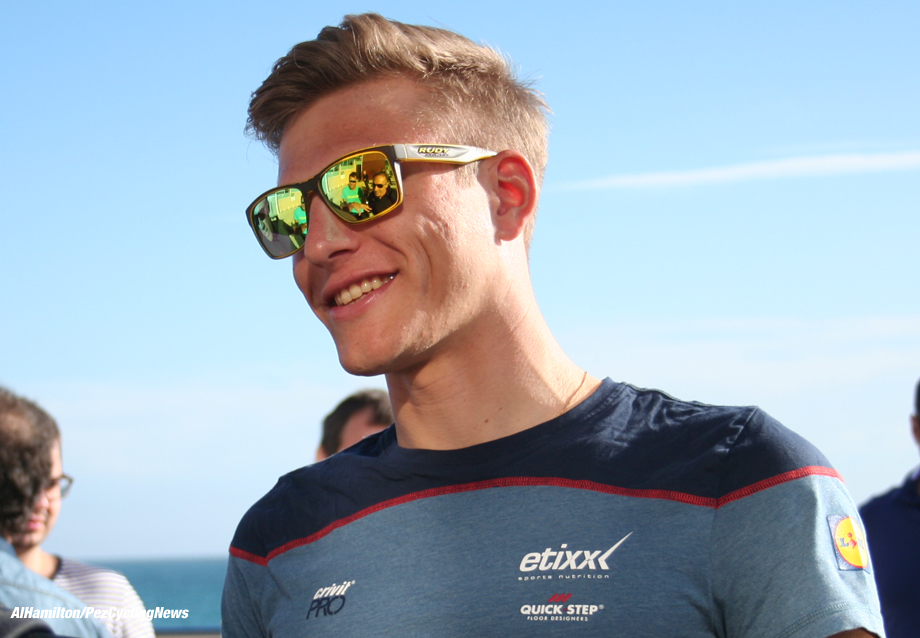 Shorter hair this year for Marcel

Stay tuned to PEZ for the Etixx – Quick-Step interview in the coming weeks.

# A big thanks to Alessandro Tegner and the team for another unforgettable day. # 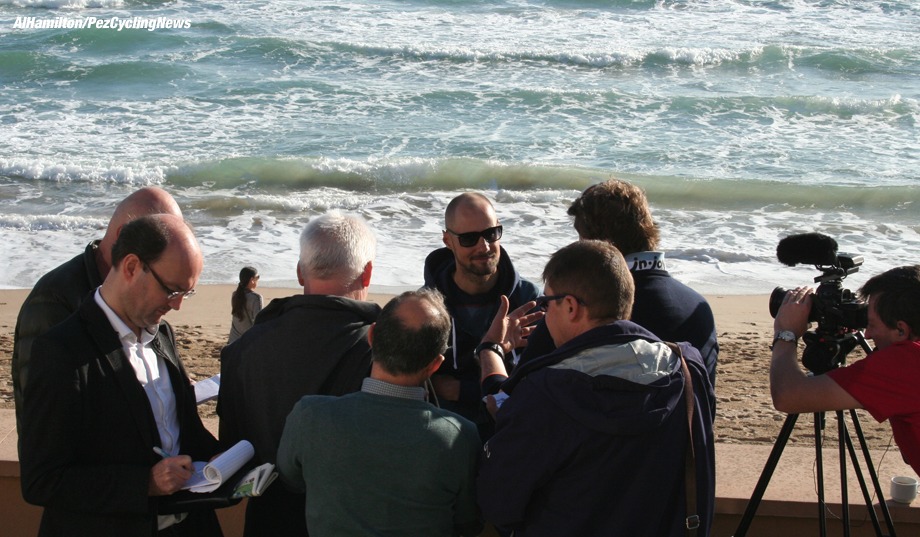 Yet more questions for Tom