The Tour of Flanders is more than just a bike race, for many Belgians (and bike fans) it is the most important race on the calendar. No matter the weather, De Ronde always throws up epic battles on the cobbles and bergs. Peter Easton of VeloClassic takes us through the background of the great race of the Vlaanderen.

As Edwig Van Hooydonck climbed the Muur van Geraardsbergen, his lithe, wiry frame lurching above his bike, the 22-year old Belgian surely thought of nothing more than survival at this late stage in the 73rd Tour of Flanders. The weather in 1989 had been typical spring all day – which in Belgium in April usually means cold and wet. When Hitachi rider Marc Sergeant raised his hand for neutral service, Van Hooydonck found himself at the front of the race with only one climb left and six enemies. As the seven riders wrestled over the first few hundred meters of the Bosberg, Van Hooydonck attacked Mathieu Hermans and launched himself towards victory.

The Superconfex-Yoko rider hunched over his red Colnago, his face caked in mud, his eyes focused on the cobbles that lay between him and Belgian immortality. Overcome with emotion at the finish line, Van Hooydonck openly wept during his post race interview. Such are the dreams of young Belgians that help them sleep during their youth, keep them awake when they are pros, and sweeten their dreams long after their professional days are over. And such is the power and beauty of the Tour of Flanders, a race that has been under intense scrutiny the past few years not for its glory, but for its greed. And this is something the Belgians, and the world of professional cycling, are not prepared to accept. 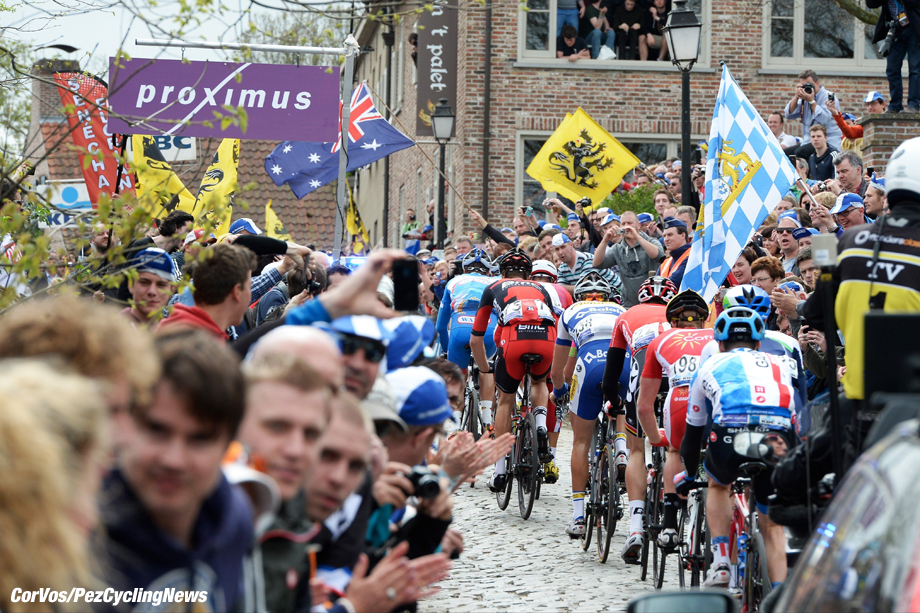 The legend of Edwig Van Hooydonck is one of many that has been carved out across the hills and cobbles of the Flemish Ardennes since the inception of the Tour of Flanders in 1913. That he cemented this legacy with exactly the same move in 1991 – this time against Johan Museeuw, Rolf Graz and Rolf Sorensen – earning him the nickname “The Boss of the Bosberg”, Van Hooydonck proved that it is not necessarily the parcours that makes the race, but the rider. This sentiment is debatable, but what is not debatable is the demanding terrain the Flemish Ardennes provides for cycling, and the pristine beauty that lay between the cobbles and hills that connect the tiny villages and their churches, bakeries and bars, schoolhouses and night shops. And while the route of the Tour of Flanders has seen numerous changes over the years – from overall distance, to climbs, to start and finish locations – it was never a question of will the race be hard enough, but purely a question of how hard. 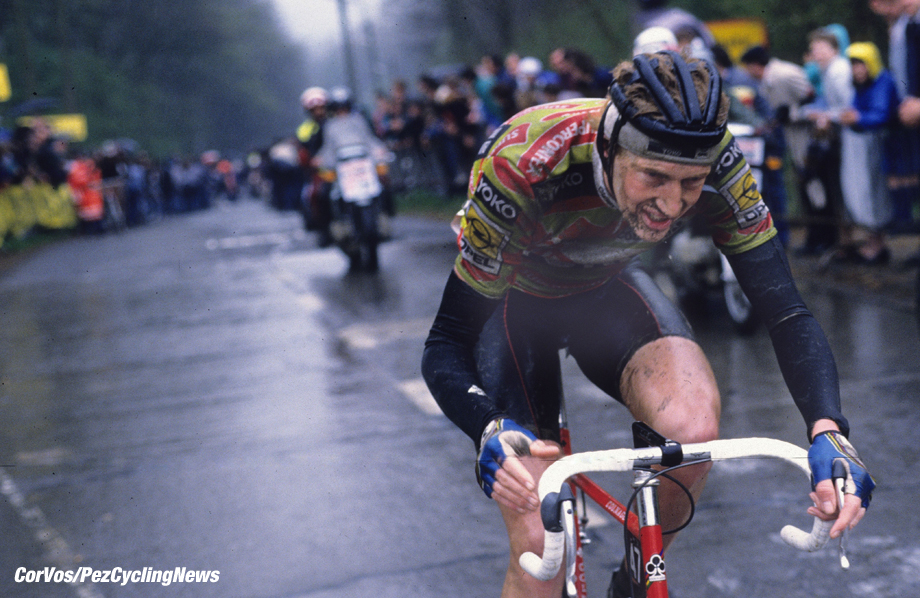 While the Tour of Flanders was created by a journalist, the motivation was not solely to increase newspaper sales, like L’Expresse for Liège-Bastogne-Liège or for Le Velo with the Tour de France. The race- and all those that followed – represents an important unifying effort for the Flemish, and for the land of Flanders and represents the struggles of the people to maintain their identity, and the land to maintain its independence. 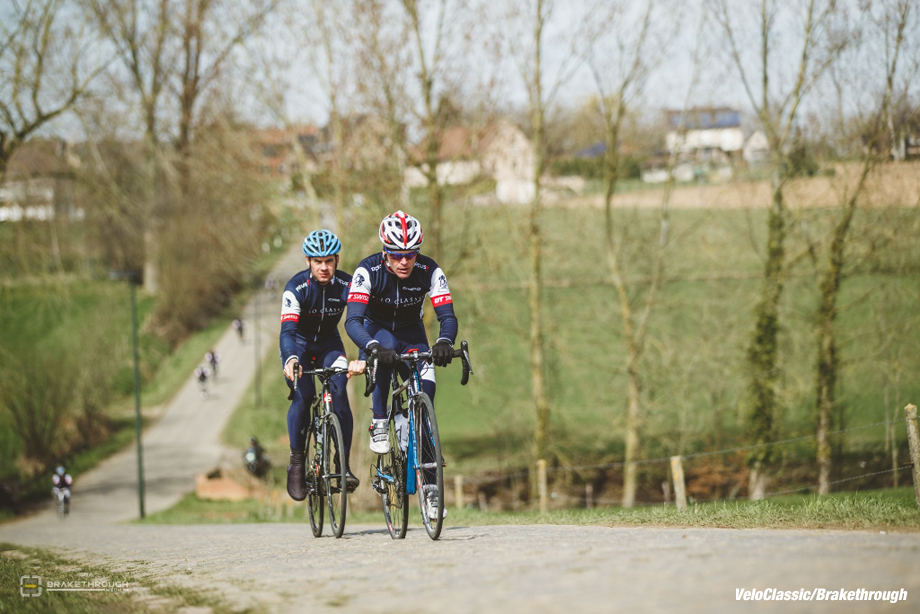 It is not only the riders that make the Tour of Flanders; it is the Flemish people and the land that makes it so special. The small roads, the cobbles, the narrow climbs, these are all roads that are used daily by the townspeople, so the race is always linked to everyday life, making the stage for the exploits of the riders a part of traditional life, and providing a personal connection for the people, their place and their race. 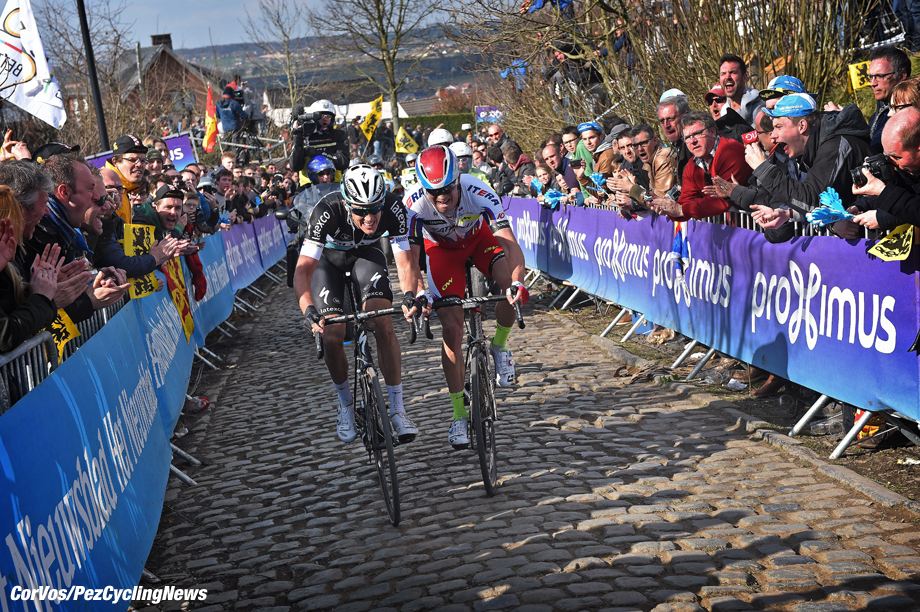 While its popularity continues to grow, the true spirit of what defines the beauty of the Tour of Flanders had been eliminated in recent years. For the 100th Tour of Flanders, coming on April 3rd, the course essentially will come down to a battle on the Oude Kwaremont and the Paterberg twice. The Oude Kwaremont was first introduced in 1974 and is 2200 meters in length. The first 500 meters of cobbles are particularly difficult, over the steepest, narrowest and uneven cobbles. Halfway up the climb, near the church of Kwaremont village, the gradient levels out from 11% to 2%, with a kilometer to go to the top. Within the sequence of climbs that follow the second ascent of the Oude Kwaremont, it is this procession that defines the final 55 kilometers of racing, but the question remains could it be better? 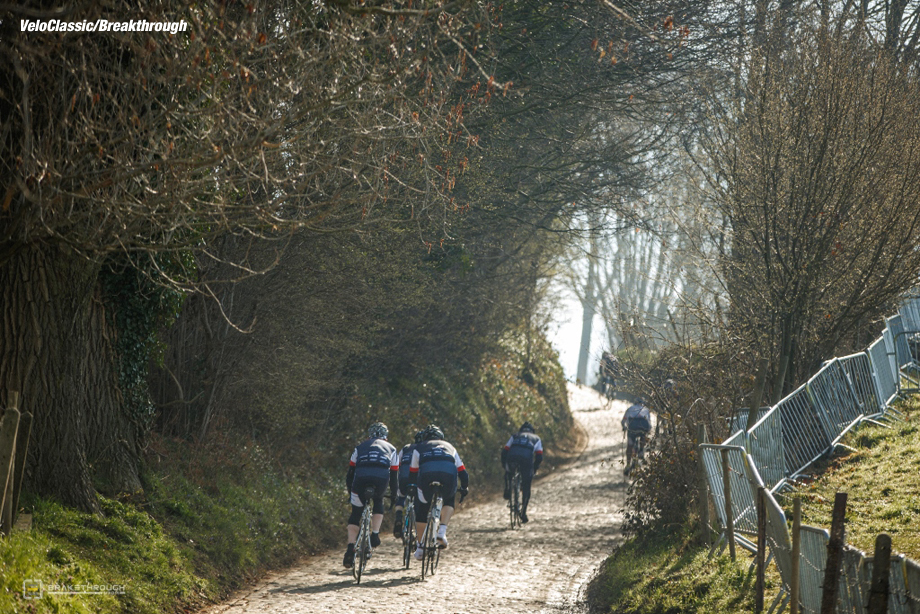 The Koppenberg, Steenbeekdries, Taaienberg, Mariaborrestraat, Kruisberg are all classic nomenclature in the Flemish dictionary of bike racing as much as the towns of Maarke-Kerkem, Volkegem, St. Denijs Boekel, St. Maria Horebeke, Brakel and Schorisse. While these names may have little to no meaning on paper, they represent the soul of cycling in Flanders, the villages where the locals reside, their daily lives interrupted for one Sunday out of the year, wholeheartedly embraced before returning to their routines come Monday morning. The Eikenberg, Molenberg, Paddestraat, Kerkgate, Haeghoek, Leberg, Berendries, Valkenberg, Ten Bosse, Muur and the Bosberg all once had a systematic place in the rhythm of the race. Now it seems to be merely a countdown to the final lap. 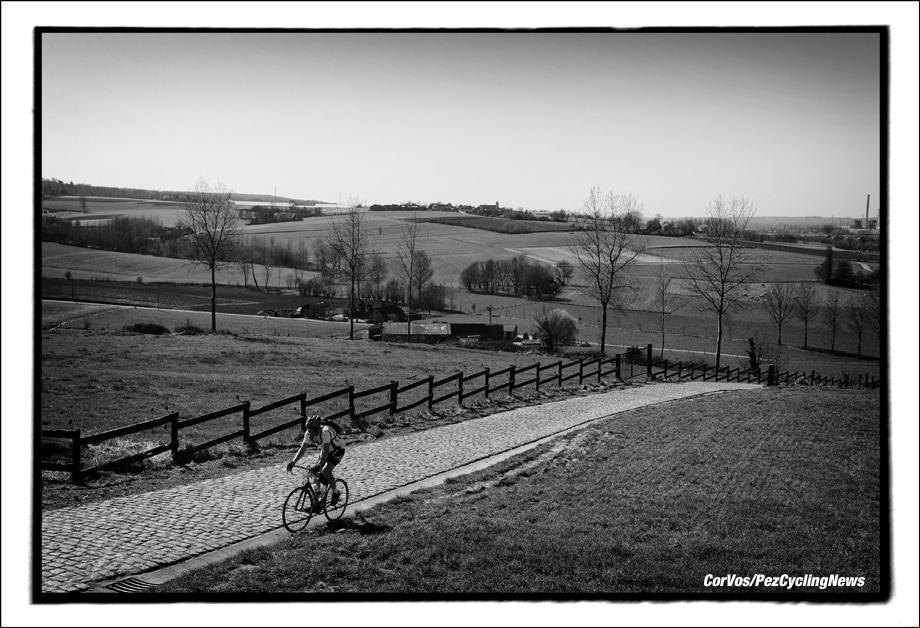 The Paterberg in Kwaremont

While the debate is still out as to what the circuit style of racing has done to the image of the Tour of Flanders, the one change that occurred to the race course in 2012 that has proven successful is moving the finish from the town of Meerbeke to Oudenaarde. Considered the center of Flanders, literally and figuratively, Oudenaarde has represented the Tour of Flanders, at least in spirit, since it opened the Tour of Flanders museum in late 2002. There is no doubting that the city is at the center of cycling in the Flemish Ardennes, in addition to the museum it also hosts the start of the women’s Tour of Flanders, a race that is growing not only in popularity and recognition, but difficulty and prestige as well. And while the shift in finishing location came down to money between Meerbeke, Ronse and Oudenaarde, the odds on favorite all along was Oudenaarde and, while one can be picky about the finishing approach (much like that to Meerbeke) the race itself still seems like it’s a work in progress, so for now, the improvements are welcomed. 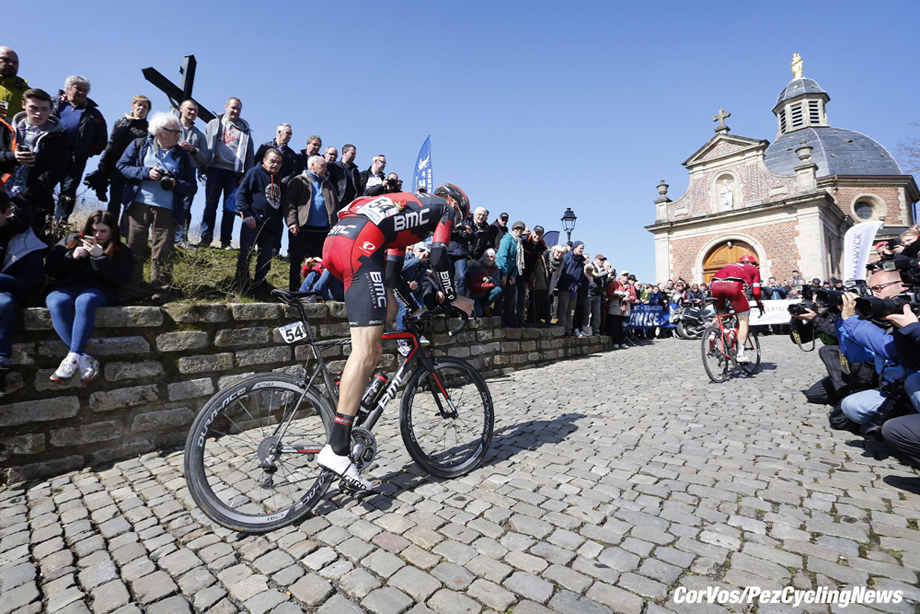 With 13 kilometers of racing from the top of the final ascent of the Paterberg to the finish, it’s easy to try and equate the Kwaremont/Paterberg pairing with the Muur/Bosberg for sheer drama, and that’s what I sense the organizers are working on. The wide open, windswept stretch of the N453 on the way to Oudenaarde – never mind the Varentstraat cobbles that are within whiffing distance of the leaders at this point – is reminiscent of the N256 on the way to the former finish in Meerbeke, so the parallel is easy to make. The difference, however, is this recently revised finale (entering its fifth edition) has yet to define a race that is without a circuit, without predictability and with the heart and soul of Flanders in mind. The drama that surrounded this race towards the finish has been slightly muted to a more calculated show of strength, an unfortunate representative of the more automated style of racing the sport has showcased over the past few years. Only time tells the tales of the legend, and that time for Flanders to tell that tale is now. 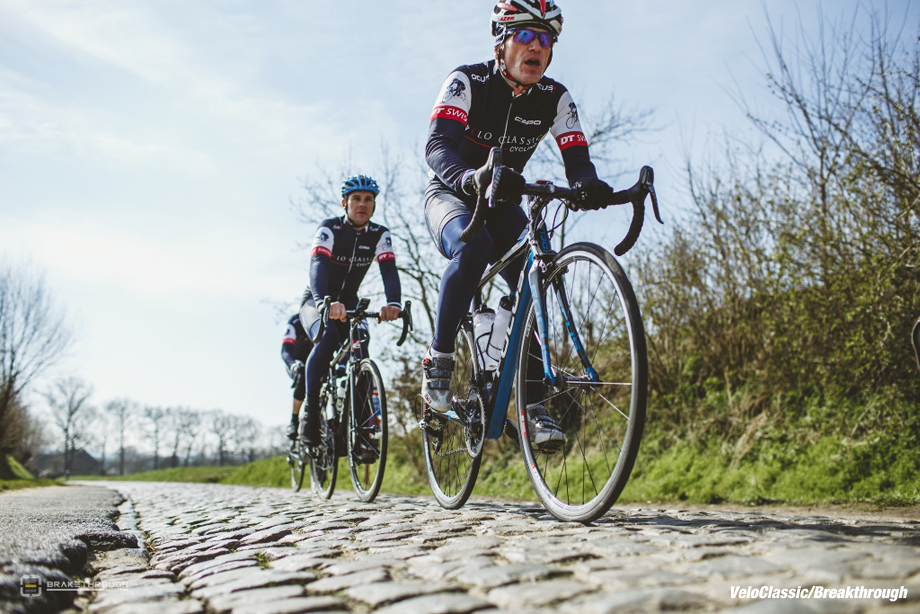 It’s important that all the great races bare its soul, display its icon, and cherish its legends. I’ve always maintained that if Liege-Bastogne-Liege is in your legs, and Paris-Roubaix is in your head, then the Tour of Flanders must be in your heart. And if you feel Flanders in your blood, you will feel it less in your legs. And while it’s true the legend of Eddy Bosberg may continue to fade for the foreseeable future, the revised parcours at least provides a hint of what the future may hold for the next legend. Where there are dreams there is hope, this is one fact that cannot be changed, regardless of what hills and cobbles are ridden enroute to a finish line. 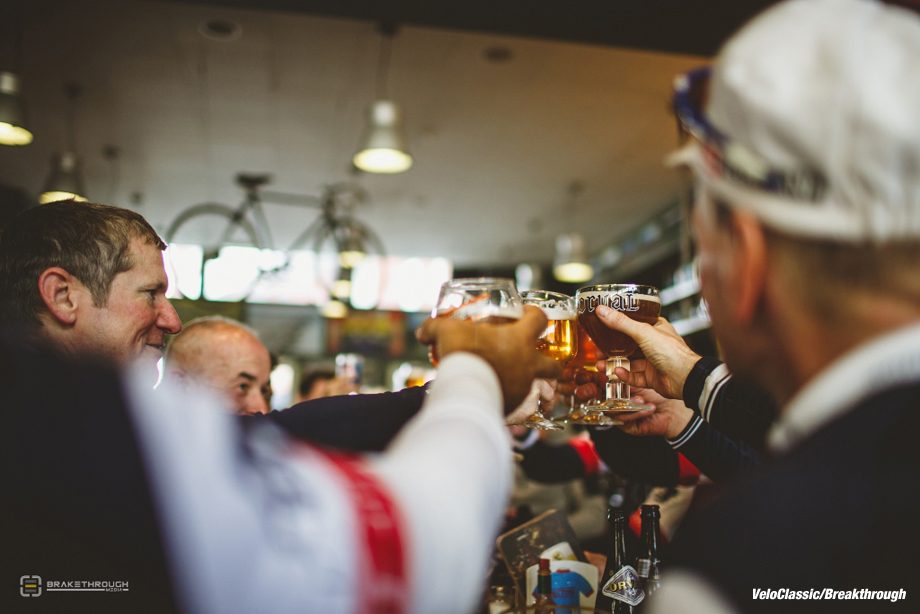 A well deserved Orval in the Flanders café

Another podium for Lepistö in Pajot Hills Classic