We all have to eat, especially on a long ride or there will be problems. Our literary editor, Leslie Reissner, knows the bonk or knock first hand, so who better to run his eye over “Feed Zone Portables” by Dr. Allen Lim and Chef Biju Thomas. This specialist cookbook is packed full of recipes for food to be eaten during activity and explains the science behind what to eat when training and competing.

Proper nourishment on a long bicycle ride is just as important as pumped-up tires, an oiled chain and comfortable shorts. Many years ago I learned this the hard way when, as a cycling neophyte, I decided to challenge Skyline Drive in Virginia without sufficient food. Climbing and descending nearly continually on the Blue Ridge on a very hot day is pretty wearing but relief eventually came. We enjoyed a brilliant descent to Luray where we dealt with our hunger pangs by indulging in foot-long submarine sandwiches. Little did we realize the climbing had only begun and as we grovelled up Massanutten Mountain in discomfort our sandwiches haunted us. The final long stretch along Fort Valley Road saw us in starvation mode and the Man with the Hammer (or the Green Witch, if you are the Continental type) was banging on us pretty hard. We arrived at our destination in bonk delirium and stopped at the first restaurant, fittingly named the Village Idiot, where we anxiously stuffed ourselves on terrible food. We could have avoided all of this “education” if only we had had something like the excellent “Feed Zone Portables” cookbook by Dr. Allen Lim and Chef Biju Thomas. 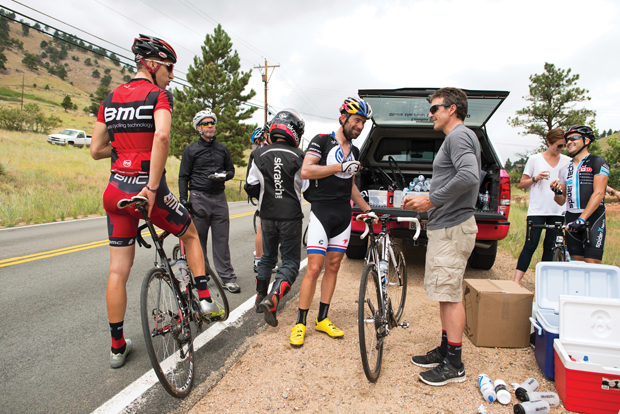 Dr. Allen Lim is well-known to pro cycling enthusiasts for his work with the Garmin Professional Cycling Team in developing new approaches to nutrition as well as anti-doping measures that eventually led to the Biological Passport. With Biju Thomas, a self-taught chef based in Denver, he launched an all-natural sports drink company in 2012. Biju has cooked for many notable cyclists, including the BMC Racing Team and together he and Dr. Lim produced “The Feed Zone Cookbook” in 2011 with 150 recipes for athletes that were light, flavourful and healthy. That cookbook included a section of recipes for food to be eaten during activity and “Feed Zone Portables” is an expansion of that idea but provides a rationale and the science behind what to eat when training and competing. 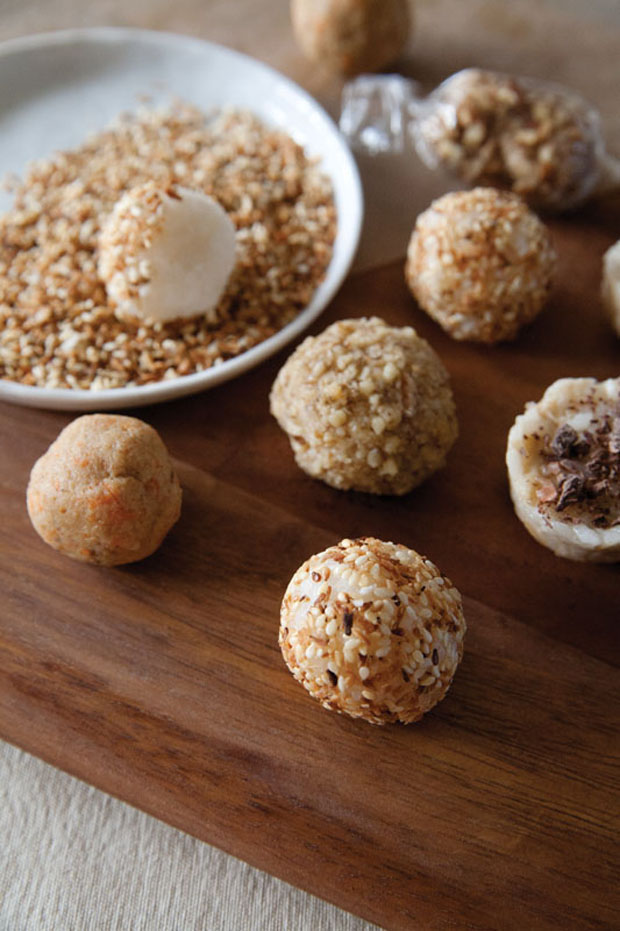 A central premise of the cookbook is that people are happier eating “real” food instead of pre-packaged gels or bars. European pros still stick to their panini, small rolls with jam, ham and cheese, as an important element of on-the-road eating. Dr. Lim believes that real food is not only tastier but will also deliver improved performance. 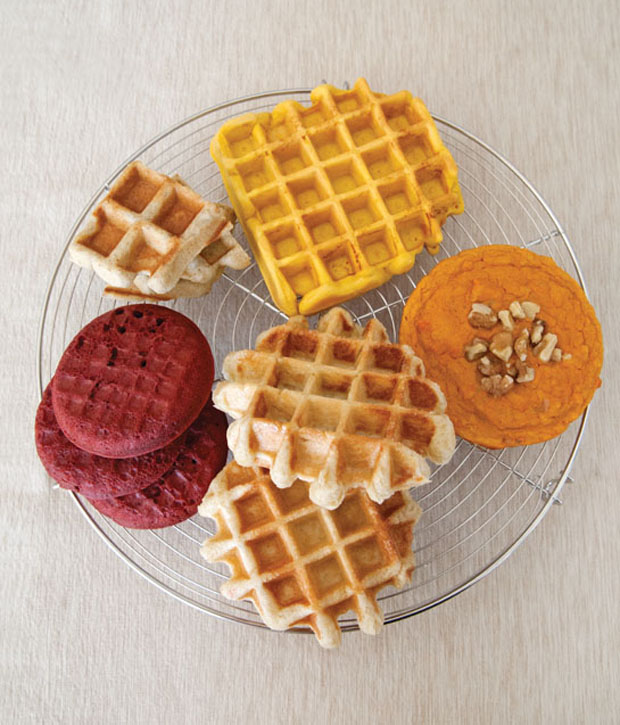 As the owner of several cookbooks (well, about 150), I can honestly say that I have never seen one that commences with an introduction 57 pages long. An impressive variety of topics is covered clearly and efficiently: calculating calorie deficits; electrolyte replacement; gastric emptying rates; liquid vs. solid calories; pre-packaged food nutrition facts; hydration; and ingredients. Then there is a quick run-through of what you want in your Athlete’s Kitchen and a step-by-step illustrated guide to cutting paper-backed aluminum foil, a necessity for the foods you make from the recipes in this book. 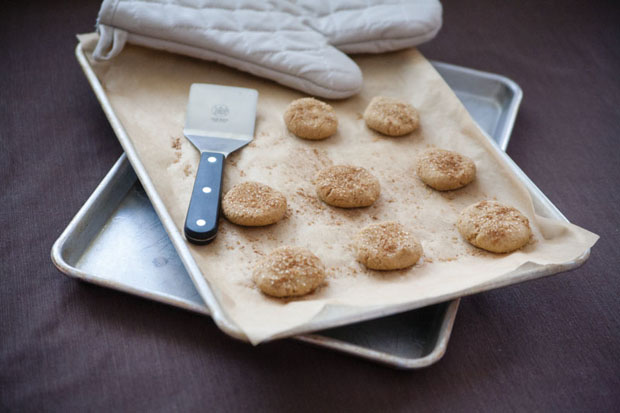 Then on to the meat of the book, so to speak: the recipes. (Don’t worry: there are vegetarian alternatives in many instances as well). The reason you will want to have a big stack of nicely cut foil pieces is because the foods you create from the modest list of ingredients are designed to be wrapped up and stuck into a jersey pocket or packed into an airtight box and kept cool. You will want to go riding with friends: the majority of the recipes make from 6 to 15 servings, admittedly small ones but still quite a bit. 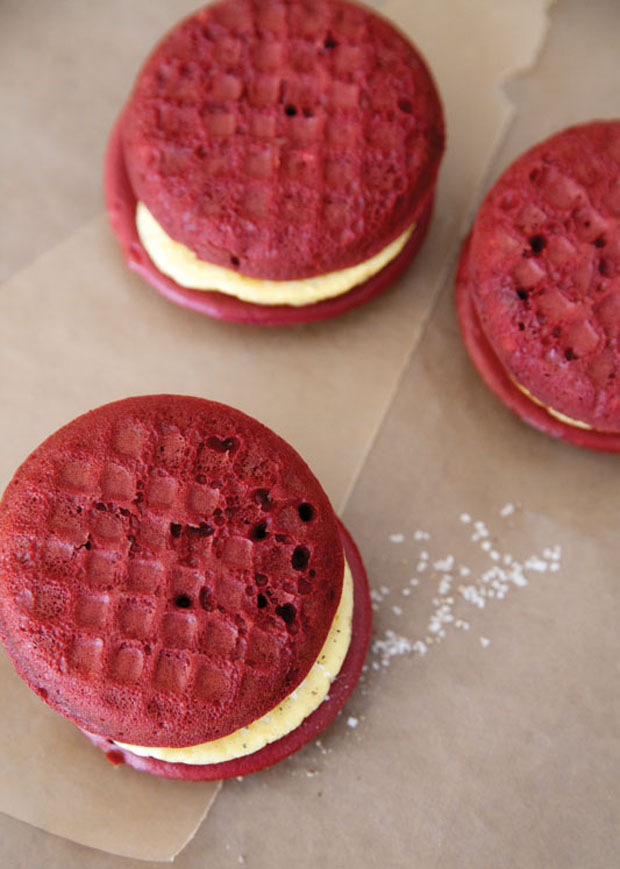 It is clear from the onset that Dr. Lim’s scientific approach has been balanced by a chef’s sensibilities in terms of colour, taste and texture. Many of the recipes in the book seem a bit strange to the normal North American palate and there is a certain fusion cooking approach with things like sticky rice (beloved at dim sum buffets) combined with Swiss cheese (beloved as fondue in the Alps). The rice cakes, which the Garmin team made famous, come in many styles, both sweet and savoury. They are joined by an entire chapter on baked eggs (use muffin pans to make these), then miniature pies, cakes and cookies, and waffles/pancakes/griddle cakes. I particularly enjoyed the chapter of “Aha! Portables” which let you take everyday foods and convert them into your training ride victuals—baked pasta, pizza rolls and, ah, blueberry kugel. And of course the celebrated panino (plural form is panini!) is present in an impressive list of variations. Dr. Lim even attempts to address the question of whether pickle juice prevents cramping on Page 245 but I will provide no spoiler for that. 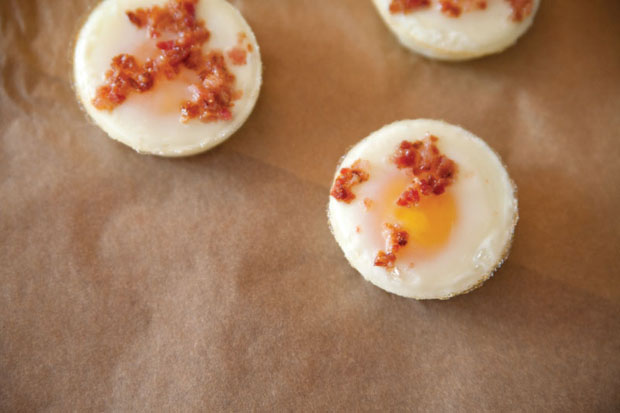 This is a wonderful book, entertaining while informative, and causing you to rethink exactly what it is you are eating (and why) on or off the bike. Unlike some of the gels or bars on the market, the food you will make using these recipes is light, fresh and appealing. The authors admit several times that there is a lot more work to doing it this way rather than just buying something off the shelf (which may have been on the shelf for a very long time) but I am certain that anyone buying this book (which has excellent photographs and is finely bound) will find enjoyment in preparing these novel but pretty simple meals-for-your-time-on-wheels. So get this original and unique book, get a rice cooker and unleash your kitchen impulses—you’ll feel better on those long rides and maybe faster too.

It’s much better than joining the Village Idiots. 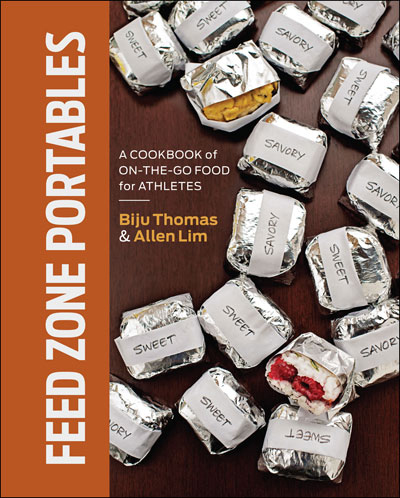 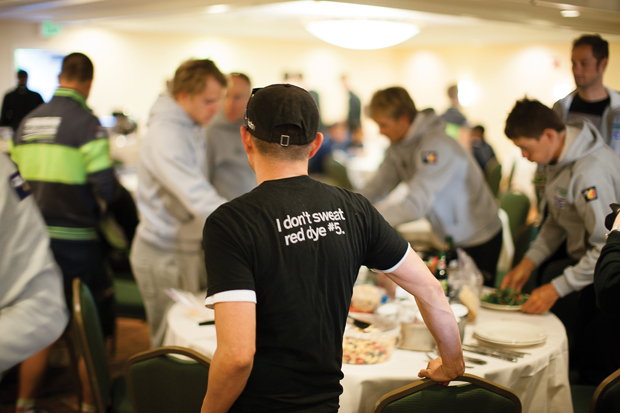 When not considering even more sublime uses for maple syrup, Leslie Reissner may be found whipping up panini to match his Tommasini at www.tindonkey.com.
Like PEZ? Why not subscribe to our weekly newsletter to receive updates and reminders on what's cool in road cycling?

“My Daddy Rides a Bicycle”