Roadside report: It’s often forgotten that there are two races on Flanders day: both the men and the women flay themselves across the cobbles and grind up the hellingen for their share of glory and for our entertainment. Guided by Peter Easton of Velo Classic Tours, we got right up close and personal with the mannen and vrouwen alike. 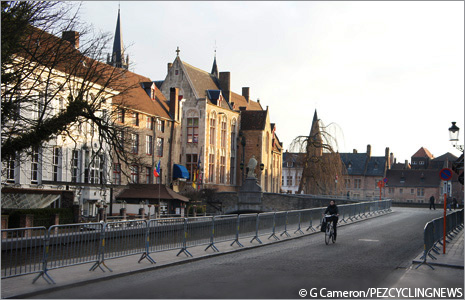 The Ronde van Vlaanderen now rolls out of Brugge Markt, but the city is still pretty sleepy as we make our way to see the riders and teams prepare for the men’s start. 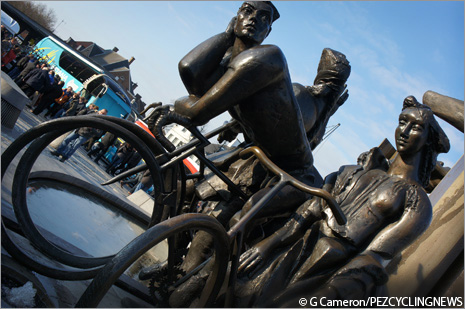 The central gathering point for the men is a beautiful town square, surrounded by ancient but well-maintained buildings. It’s the ideal location from which to start one of cycling’s most venerated races. The women start and finish in Oudenaarde, going straight into action, and skipping the longer, flatter preamble to the men’s event. 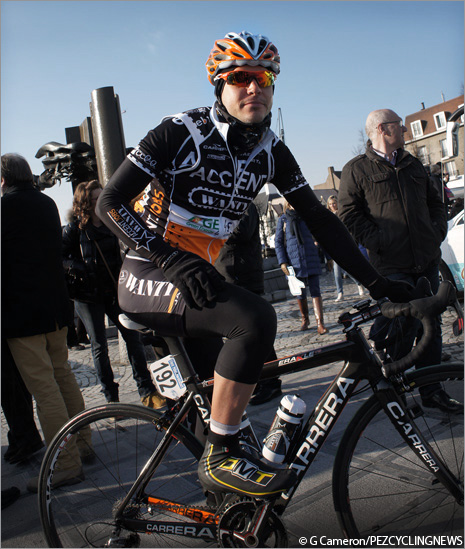 Unmolested by the frenzy that normally surrounds his brother, Jérôme Gilbert was taking in the start in the colors of Accent-Wanty. I ask him if today’s parcours is something that will allow him to do anything? The answer is very negative, but delivered with a smile: “No, no, no, no!” 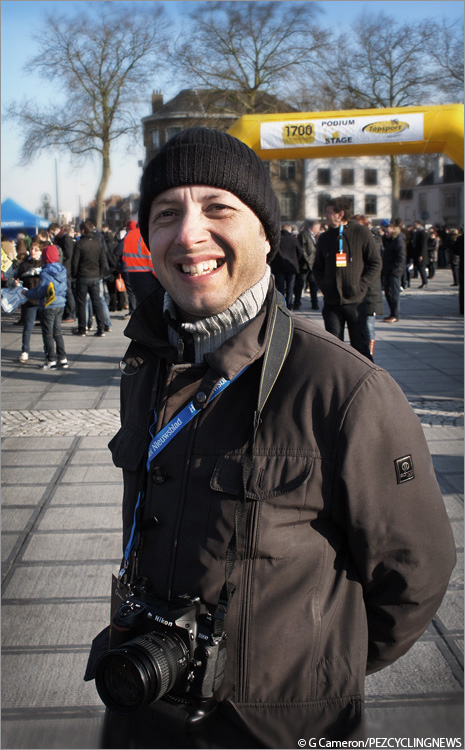 Lorenzo Franzetti from Italy’s Cycle magazine is covering Flanders once again, and reckoned a possible beneficiary if Cancellara and Sagan watch each other too closely could be Luca Paolini. The Katusha man is in fine form, and still strong at 37 years old. 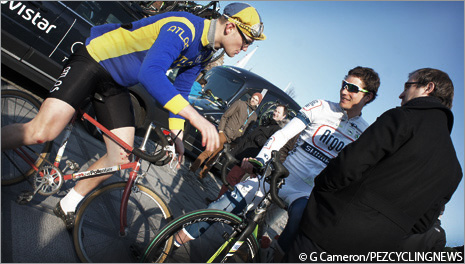 Argos-Shimano’s Ramon Sinkeldam passes the questionable field intelligence from an over-enthusiastic fan about exactly how to get up the Oude Kwaremont with good humour. Apparently, it’s just a right turn half-way up, then a left. Simple. 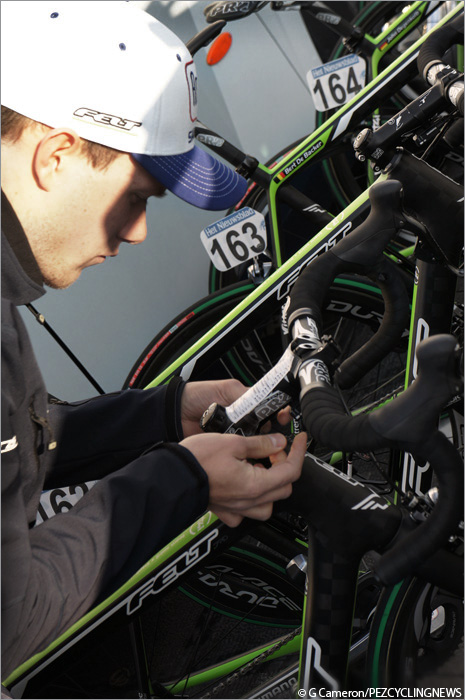 Back at the Argos-Shimano bus, John Degenkolb is looking like a rock star with a fair old growth of beard, and some natty head wear, while mechanics tinker in a last minute checked-this-already-but-better-check-it-again fashion.

Young German rider Nikias Arndt is making his first Flanders appearance and takes very great care when attaching his list of kasseien and hellingen. He, too, looks like a rock star, not least because as he’s busy fixing the paper in place, his team bus revs engines firing a plume of exhaust swirling around him.

The number of fans in the area of the team buses, and rammed along the security fence rises and rises, but we have to nip out, and back to … 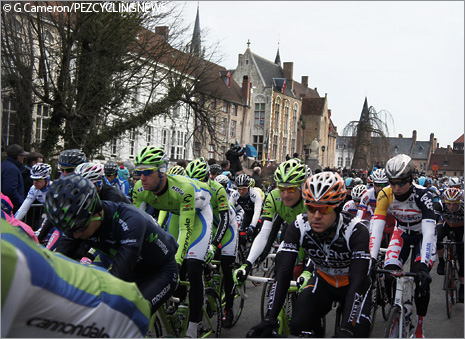 … the Hotel de Tuilerieën, where the Velo Classic Tours party is staying. It’s right on the start of the course, so close you can probably actually see the race go by from your bed, if that’s your thing.

Peter Easton has got the Flanders race chase down to a fine art, and we’re marshalled into place and it’s off to the VCT bus for our first appointment with the women’s race.

We make good progress, ahead of the bulk of the race traffic. For Easter Sunday, the Belgians are in holiday mode, but it’s relaxed. The roads are clear, and we’re able to make our first appointment in good time.

Patrick from St Paul, Minnesota, and Larry, from Sioux City, Iowa (and Cycle Italia fame!) track down an informal coffee and hot chocolate stand as little flakelets of snow tantalisingly brush us on their way to the forbidding cobbles we stand on. But the warm drink, and the ‘regional’ marzipan cakes do the job of fending off the weather, and the sun creaks back to life above us.

As the race convoy whirrs past on the cobbles, the adults start to appear like threatening warriors on the skyline in old Hollywood adventure flicks; the kids amuse themselves for the wait by ripping up what remains of last years corn crop and hitting each other over the head like mini-gladiators. 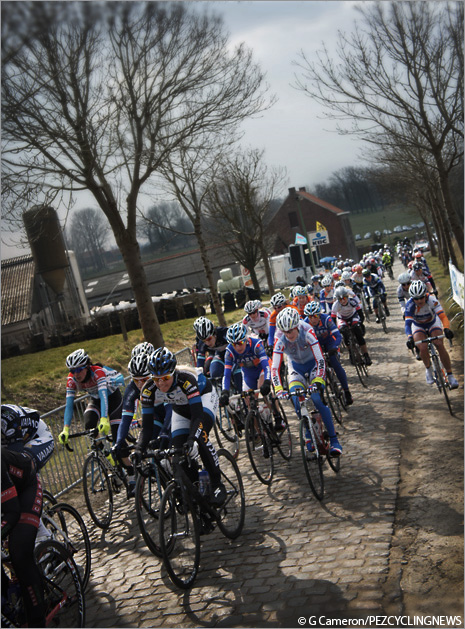 The field clatters into view on a gradual rise, and there are alarming gaps already, with barely an hour covered. There are a few Hitec Products riders up there and one of their guys has been nervously pacing the parcours with spare wheels … just in case. 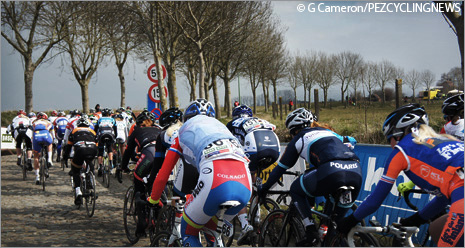 They sweep around a bend, and then they’re stretching away like a train into the distance, beneath a still threatening gun-metal grey sky. Our viewing schedule has been mapped out to ensure quality viewing, so we’re in the van the instant they’re through to give us time to make it to the Haaghoek cobbles. 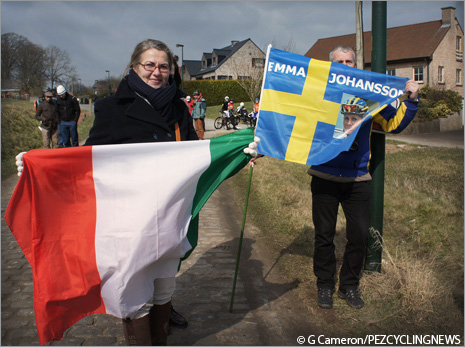 We get talking to a group of friends, two supporting Emma Johansson and two for Elisa Longo Borghini – the Flemish support Elisa because she has a Flemish boyfriend and they’ve got to know her, but they know the course can make or break the dreams of their favorites.

You can see this nasty pit of stone, Haaghoek, looking back down the course. It drops away off a small climb and then you see the riders suffer towards you. 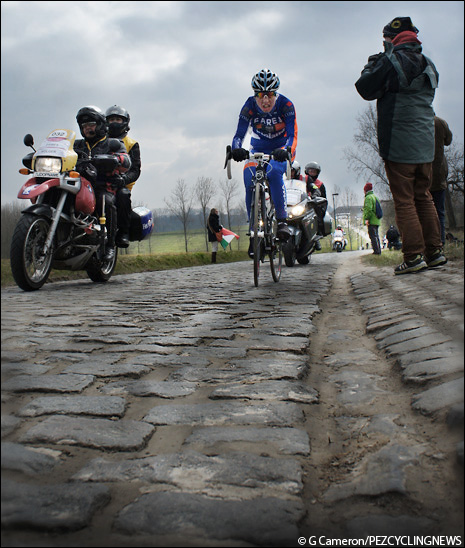 A lone Faren-Let’s Go Finland 2013 rider is away, her face drool-soaked from the effort. The field is closing in pitilessly. The Orica-AIS ladies are to the fore, Loes Gunnewijk flanking Emma J, as our new pals get excited. Marianne Vos looms ominously, off to the right of the peloton. 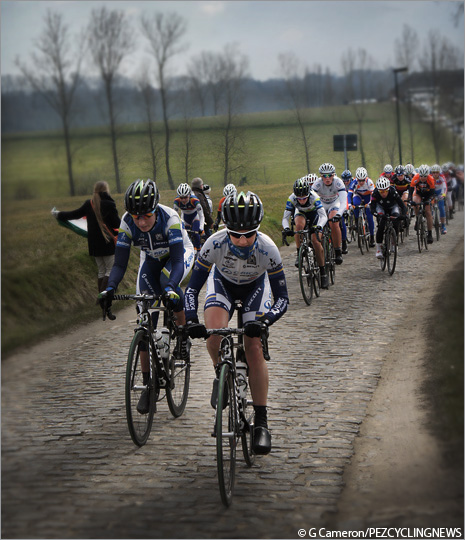 We’re going to dash up the Eikenberg next, to see the men for the first time, and the women are still forcing out of the Haaghoek as we make our exit 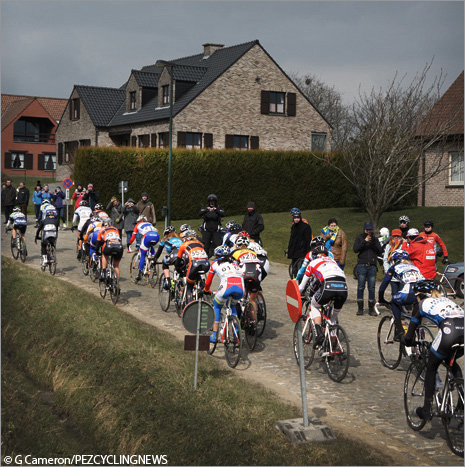 The drive to the Eikenberg takes us out onto fields which have a road cleaved through them. The kind of road that either shelters you from the howling wind, or funnels it right towards you. The mens break, with a Accent-Wanty rider dangling off the front comes by, and the fans are waving the more ‘nationalist’ all-black Lion of Flanders. 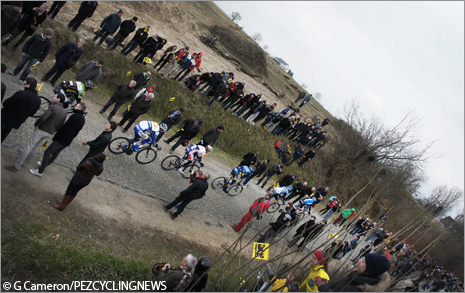 It must be a calculated tactic because it’s junior school kids who are handing them out smiling to everyone in the vicinity. The gap is nothing significant, not like a regular stage or race where they might get six or eight or more minutes. 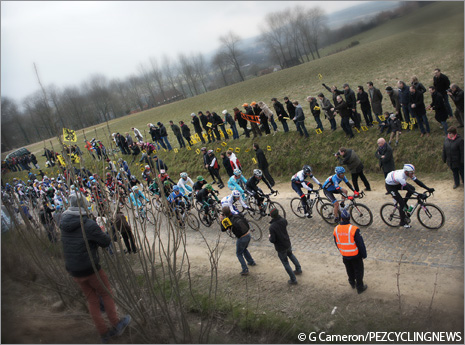 It’s barely sixty seconds as Ian Stannard leads what will ultimately be another fruitless Sky assault on a Monument. 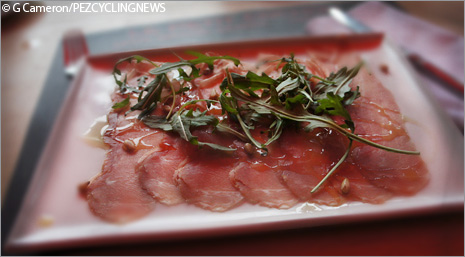 Time for lunch, at the very busy Le Petit Couchon restaurant. Busy for two reasons: first, it’s damn good with great food and company; second, because the men will thunder past again very soon. We chow down, then head four steps out of the front door to watch a new break roll past.

They’re bent into the wind, but they’re looking around, and you just know they’re not going to be escaping significantly. The television helicopters are too close for comfort. 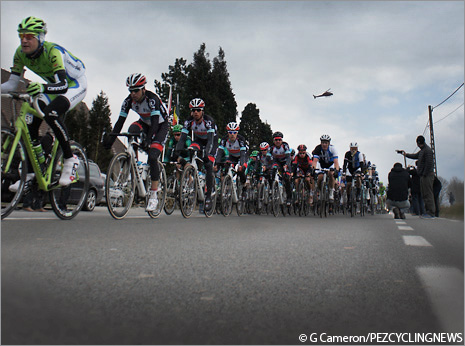 The main field is right behind, and we know by now that Boonen has been ruled out of even Paris-Roubaix next week. We go back to the van and out to the Steenbeekdries to watch the men live for the last time today. 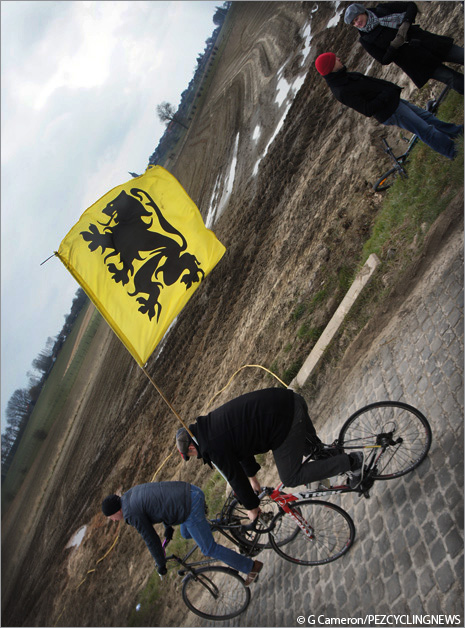 There’s a marquee offering food and drink just up from our chosen spot; the patrons have been helping themselves generously, as a two-buddie lifting competition turns into a ten-man body pile. The guy at the bottom is eventually peeled off the ground and stood upright again. 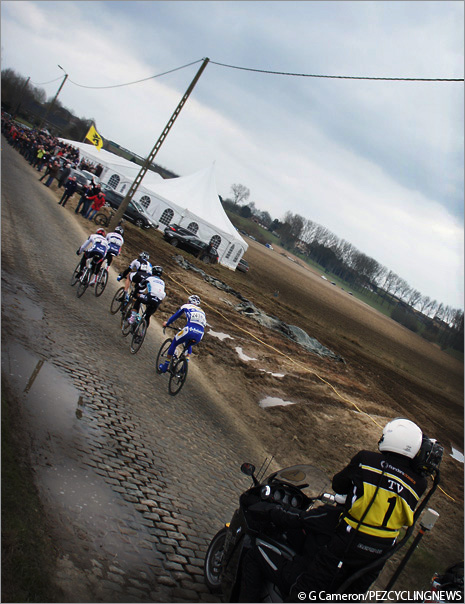 The break rolls down towards us, and they thump and bump over the cobbles. It’s looking even more ragged now, as the distance kicks in harder. 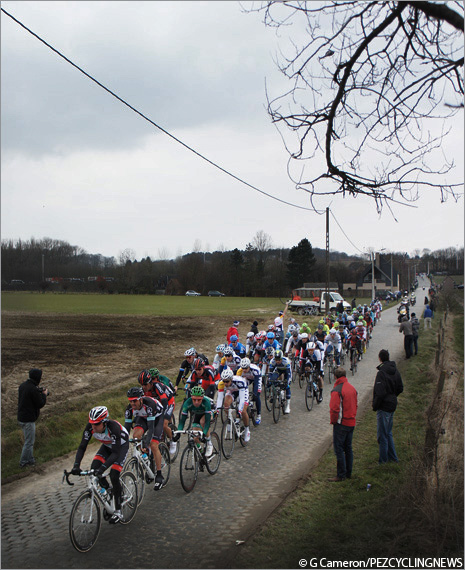 The peloton comes through, and RadioShack look mob-handed up front. It’s a much-reduced field now though. The winner is coming from this selection. No-one else is coming back. 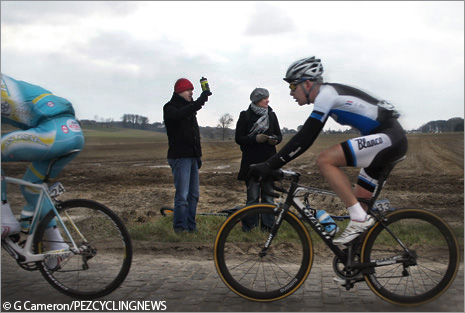 Ian Stannard’s bottle shoots out of its cage like a jettisoned Space Shuttle fuel tank; a following vehicle instantly roadkills it sending green plastic shrapnel across the stones.

The stragglers clatter past, and we repair to the restaurant for more food and drink, in a private viewing area with big-screen TV to watch the race finale. The patrons next door in the bar, cheer in awe as Cancellara puts Sagan back in his box for another while, with an imperious climb of the Paterberg.

It was, as it always is at Flanders, a rare privilege to experience such a Classic in the raw. Thanks to Velo Classic Tours for making it happen so seamlessly.

Lee’s Lowdown: Paris-Roubaix, The Star of its Own Show