Behind The Glamour Of De Ronde Van Vlaanderen!

By PEZ Crew On Mar 31, 2017
Share
Like PEZ? Why not subscribe to our weekly newsletter to receive updates and reminders on what's cool in road cycling?

Tour of Flanders ’17: The glamour of De Ronde van Vlaanderen isn’t all mud, rain and cobbles, there is much more to the biggest race on the Belgian calendar. Peter Easton knows his way round the ‘hellingen’ and the ‘kasseien’ and so here is his look behind the scenes of Vlaanderens Mooiste. 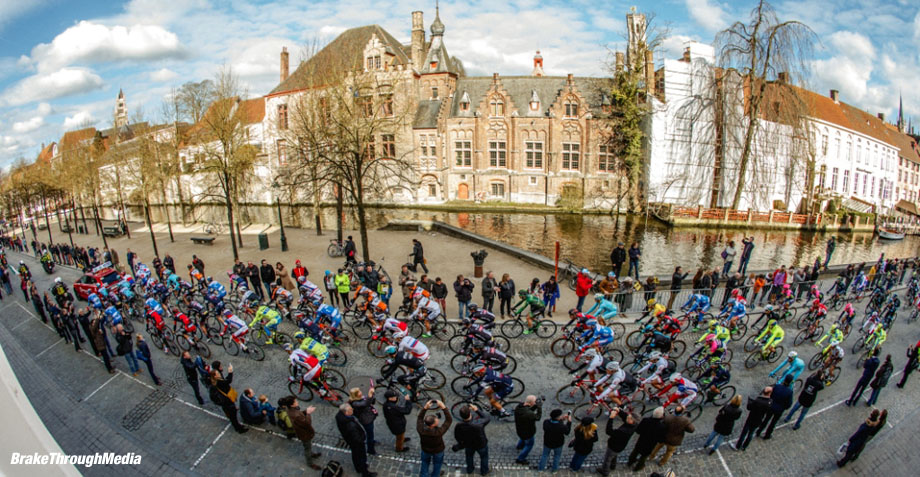 The Flanders start from Bruges

As the rain lashed against the large windows looking out onto the Dijver canal in the center of Bruges, the chatter in the breakfast room seemed to belie the gloominess that draped the morning of one of the biggest races in cycling. Among the small group sat a former professional, himself having raced in these exact conditions, in this same race, as well as hundreds of others. “There are only two races that I was really nervous for in my career – the National Championships, and the Tour of Flanders.” Eric DeClercq’s quiet demeanor conceals an enormous love for cycling. A tireless domestique turned team leader, DeClercq raced professionally for twelve years. But for him, and many others, the biggest prize was more than a victory. It was simply competing in the Tour of Flanders, experiencing success relative to his abilities and being profoundly proud to be Belgian. Two hours before race time and I ask Eric what was going through his mind. “For me, today, yeah, I am still nervous. It will never leave me.” 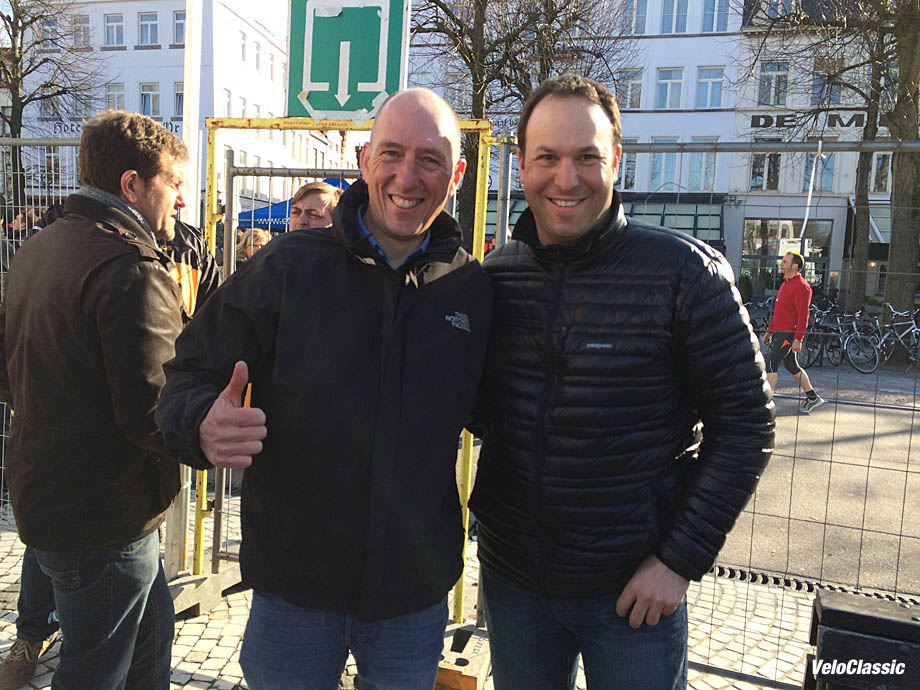 While the definition of a ‘flahute’ doesn’t translate literally, if you are one, the Flemish will sense it. Only then does it earn you an invitation behind closed doors. And this, behind the drifting pillows of cigarette smoke and emptying bottles of Jupiler, this is the heart of Flemish life, and the soul of one of cycling’s most popular races. But it is only through understanding, appreciating and embracing the former that one can clearly see the importance, beauty and significance of the Tour of Flanders. Viewing Flanders as a grocery list item to tick off before check out is considered an insult to the Flemish, the American and Anglican mentality of instant gratification is unappealing and often met with a grunting, exhaling uphff from curling lips and a shrug of the shoulders, in this case a polite way of disagreeing. Flanders is what it is for many reasons, but first and foremost it’s about pride. A pride of place, pride of tradition and a pride in one’s self. Not all have it, but those who do, well, you can surely sense it. 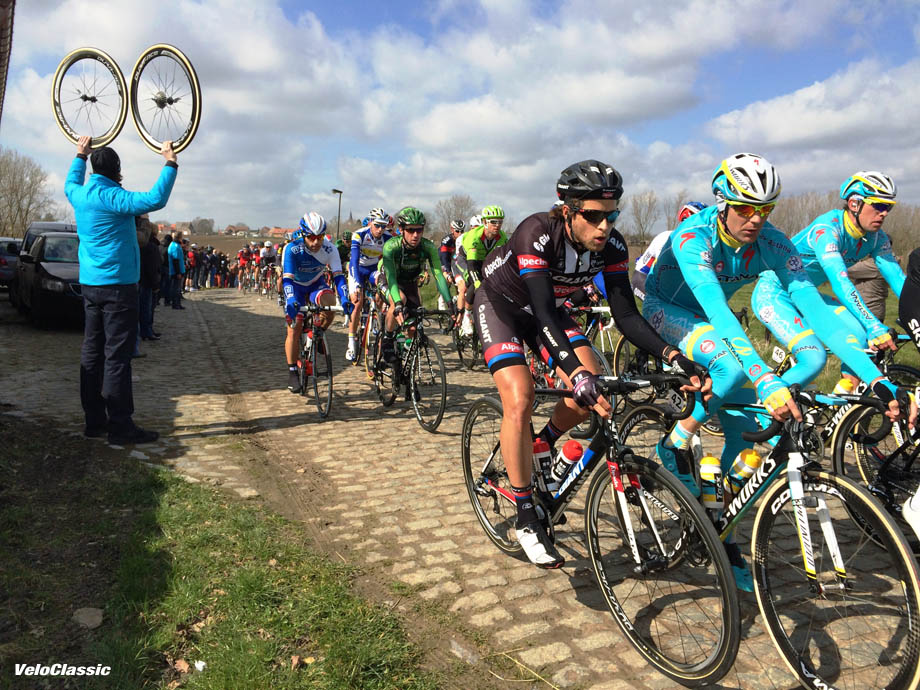 The romance of the cobbles

There is a sense of romance about the places the Tour of Flanders passes through, a sense that there exist these utopian villages with shrines erected to memorialize the suffering and honoring the feats of strength of our sport’s stars. The truth is, yes and no. While there are statues, they honor the emotions and the aura of the Flemish within the race – its founder, Karel van Wijnendaele, Merckx, Faingnaert and Schotte; there is a modern bicycle monument in Brakel, a racer’s monument on the Paddestraat. We all know there is a museum in Oudenaarde. But most importantly, these memorials are interwoven into and dedicated to the theme every discussion cycling ultimately touches on here-Flemish life. When you peel back the layers and see what is left, it’s a culture that is humble, lives simply, is respectful and remains true to itself. While this may define many, combined with a hardened work ethic and unwavering loyalty, this defines the Flemish. “I won about 20 races in my career,” DeClercq says between sips of coffee. I ask him to name a few of his biggest wins. “About twenty” he repeats. Sensing my confusion, he continues “if you live off those, you never move on in your life. I gave most of my trophies away.” 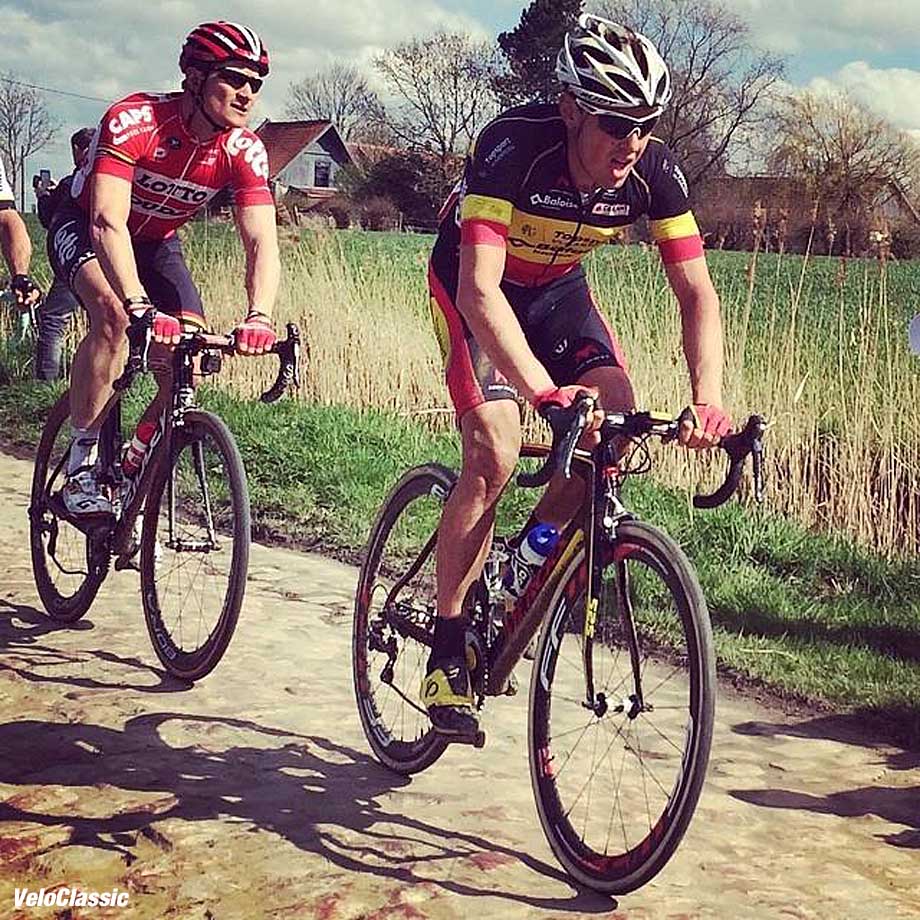 Perhaps the most defining trait of the Flemish is exactly what DeClercq personifies – humility. The Flemish are disinterested in those who are arrogant or brash, qualities that many feel do not define what this working-class culture represents. As for stardom, few are impressed with what a rider has and more impressed with who they are. When Preben van Hecke won the Belgian National Championship in 2015, it felt like a victory for all Flemish. A man who has carved out a career of virtual anonymity, racing for Walter Plaenckaert’s Topsport Vlaanderen team his entire career, choosing to race for the government sponsored team in order to be a mentor to younger riders. His name is now synonymous with the greatest Flemish riders to wear the black, yellow and red jersey. Merckx, Van Looy, Schotte, Van Steenbergen, De Vlaeminck, Museeuw, Steels, Boonen. In seeing him at the start of the Tour of Flanders last year, I asked him what it all meant. “I get to race today as national champion. That is a dream come true.” There was no talk of a bigger contract, no talk of being a favorite or a wild card. It was about representing his heritage the best way he knew how – on his bike. 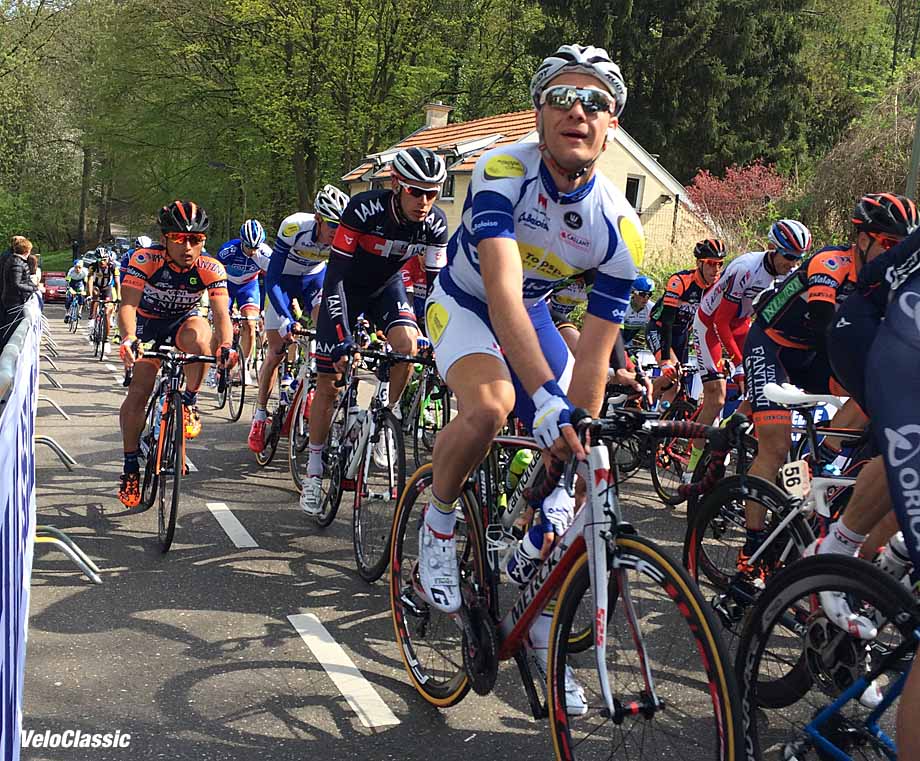 A teammate of Van Hecke’s when he won his title, Edward Theuns was preparing for his first Tour of Flanders in 2015, though his relaxed nature was that of a cagey veteran. Theuns was not remiss in recognizing the opportunity the day brought him and the fulfillment of a boyhood dream. In addition, he was sharing it with other riders-friends – who he shared this dream with, and they their dreams with him.

He is part of a group of local riders called Sportvrienden Gruut Gent, loosely translated meaning a mixture of sporting friends from Gent. The group consists of Tiesj Benoot (Lotto-Soudal) Dimitri Claeys (Cofidis) Bert De Backer (Team Sunweb) Iljo Keisse (Quick-Step Floors) Nikolas Maes (Lotto-Soudal) Edward Theuns (Trek-Segafredo) and Otto Vergaerde (Veranda’s Willems-Crelan), all Flemish riders from Gent. This is different from the regular supporter’s clubs that have fan clubs for a rider, typically in the rider’s home town with its club headquarters at one of the local bars. SVGG, as they are known, is a group of professionals that are friends and training partners from the heart of Flanders. De Backer, who at 32 is the oldest of the riders, is the unofficial leader of the group. “There are 1,001 things that strengthen us and not one that weakens us. I am very proud of that.” And what if the friends find themselves in a break together? “That would be a dream. But we are realistic, but it makes us no less ambitious.”

Far removed from the pro scene and the riders, across the E40 highway in the flatlands that drape the northern part of the Schelde River, the life of the Flemish remains the same. Not far from Erpe-Mere, home to former pro Kevin Van Impe and the more famous Lucien Van Impe, the small town of Lede begins and ends every day like most small Flemish villages. People shuffling through the square, there’s a market day, late morning coffee on the square and the steady stream of bicycles through the village. The race doesn’t come through here, but it still holds an important place on the calendar posted in every house. 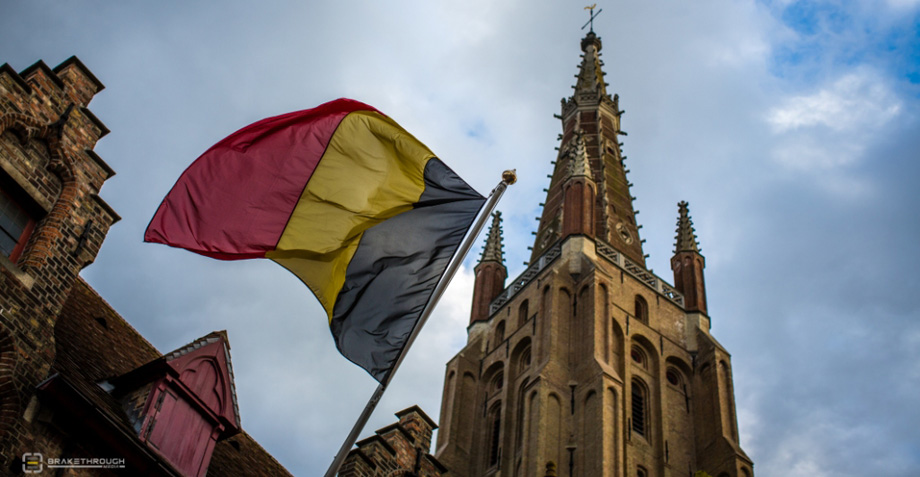 The flag of Belgium – Not the Lion of Flanders

In one such house I know well, in the corner of the garage, there are a dozen boxes stacked to the ceiling. Each box contains hundreds of small yellow flags with the black Flemish lion. This is the flag of the people, not the government. This is the identity of a culture that for centuries others have tried tirelessly to eradicate. Like most Flandrians, the owner of this garage, Ghislain, is a cycling fan. But it’s only because it is in his blood, it is what he grew up with, it is what he knows. I suspect his three grandchildren Benne, Morris and Louie will know the same. When I speak with Ghislain about bike racing, I speak of the favorites to win. He speaks of the Belgians. When he asks if I would like a beer, I am served a local beer that is available only in the surrounding neighborhoods and restaurants. There are thousands of garages like this, and owners like Ghislain, many of whom I’ve met. They form the backbone of Flemish life, a culture that, unless you embrace, you risk remaining an outsider. 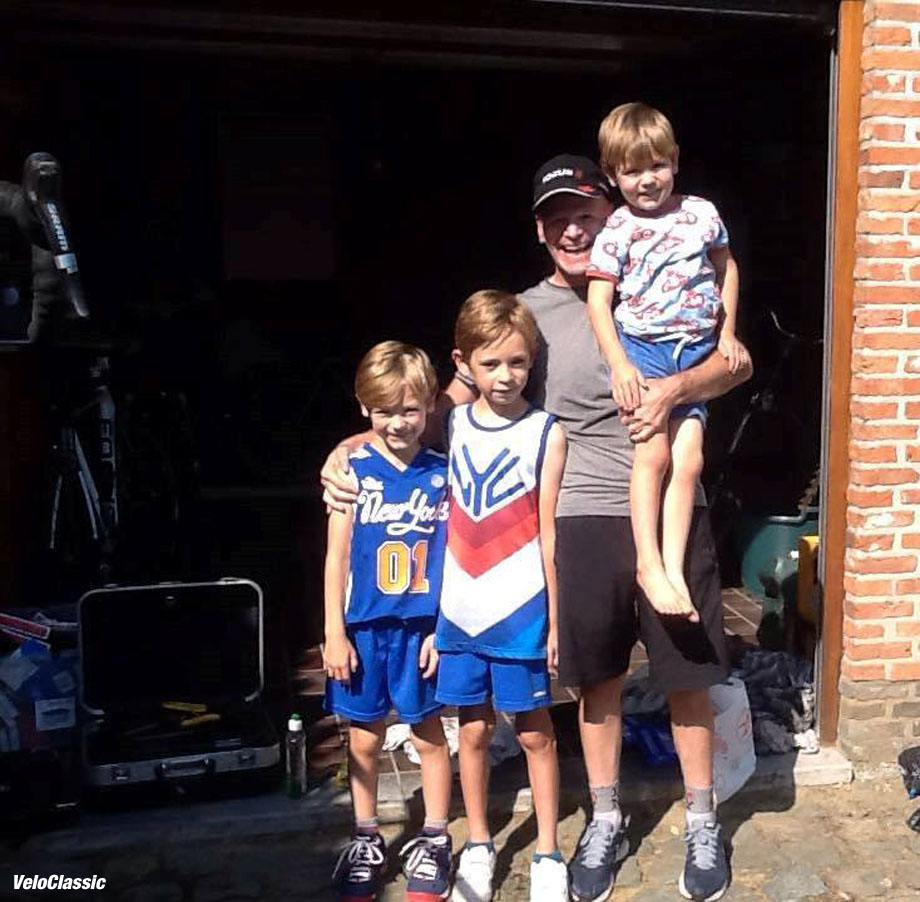 One garage in a thousand

To Ghislain and his friends, it’s an important ritual for more than just chasing the race. It’s about expressing their loyalty to the independence of Flanders, something they’ve known of since their birth during World War II. And in the end, there is no great debate about who won or how the race was lost, only if the man won with honor and if he is a worthy person to represent the Flemish creed. Most often they are. Dinner that evening will be no different, and same goes for Monday morning. The difference merely is the fact that another year has passed, another edition of the Tour of Flanders contested. 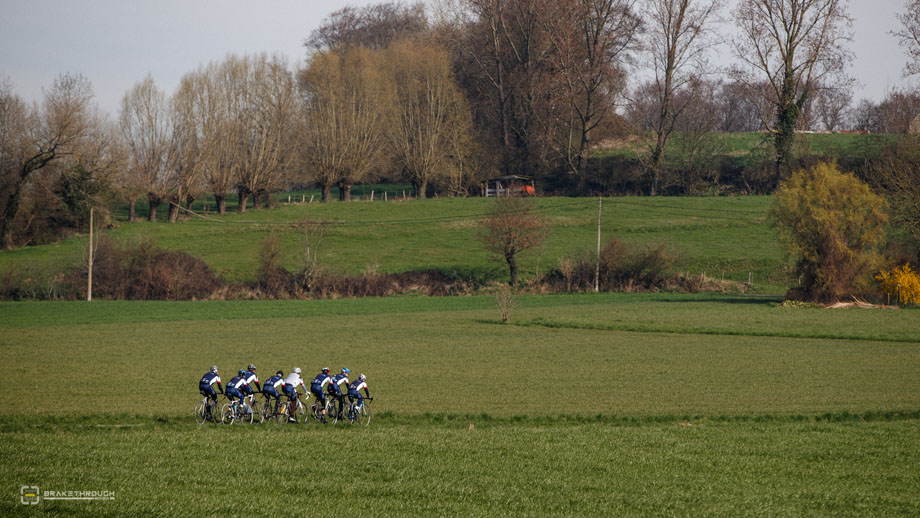 Speaking with De Backer, DeClercq, Theuns and Van Hecke gives a glimpse into the everyday life that goes into being a professional cyclist from Belgium. And while the Tour of Flanders is a very important race, it is one of many on a season long calendar that the riders are called on for. It is this very perspective De Backer says, that helps ease the pressure and keep the crowd and intensity at a manageable distance. Before the crowds swell on the side of the road, before the VIP tents are assembled and the team buses make their way to the start, the riders need to prepare. The long hours, the bad weather, the intensity, the travel. These parts of the professional life are often glossed over, viewed through a tinted lens for a few days a year to simply say I saw the best, or the favorites, or whoever. But each rider who pins a dossard on the first Sunday of every April has a long story, a long road to that point, and a reason for being there. Where their story goes from there is up to them, but rest assured it’s been an honorable one to get to the start line of Vlaanderen’s Mooiste. 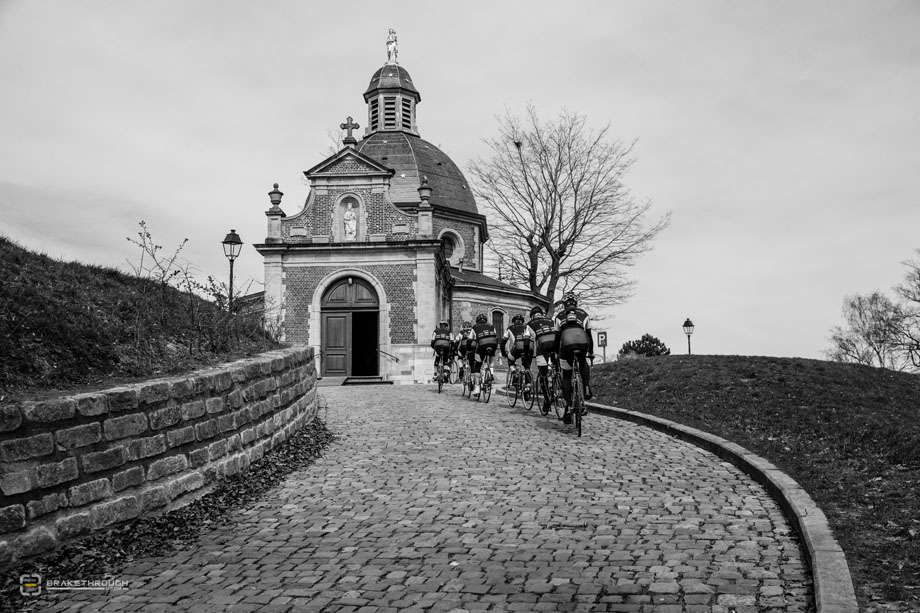 The climb of the Muur