PCN’s Dutch correspondent Robert van Willingenburg filed this report early this morning, after spending the weekend in Flanders, riding the course on Saturday, then covering the race on Sunday.

Every Tour of Flanders adds to the legend. Particularly every last one. But if you are looking at the pro race when you got up at 6 the morning before the event just to preceed the big guys, it’s something special. 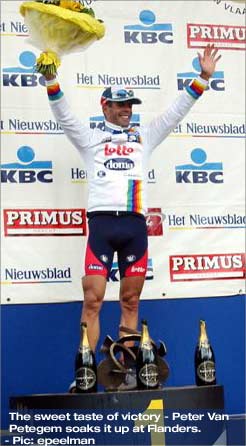 Cycling is sacred in Belgium, and the first weekend of April is the annual celebration. No less than twelve thousand enthusiasts pick ‘the day before’ to climb their own bike and follow the exact same route (or part of it) as the pro riders do on Sunday. Already furnished with fences and banners on every climb and cobble-section, and with police and lots of volunteers on every dangerous crossing, Flanders is temporarily owned by cycling. And all who ride are heroes to the audience.

And as you ride that 255 km between Bruges and Meerbeke, like me and my buddy Randy Krattley did, even as a well-trained amateur your respect for those pro’s grows with every yard of cobbles.

“The landscape is a lot like Wisconsin, where I was raised”, says Randy, “only there it’s without the cobbles and not that steep”. An American in Flanders, it’s something else. As a former mountainbiker and standing at 170 pounds (all muscle of course), Randy appears well fit for it. He has no trouble overcoming Koppenberg, Kwaremont, Paterberg or Geraardsbergen on his Schwinn (‘aka: bicycle’). 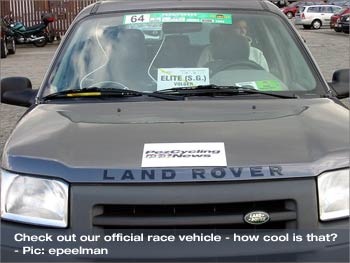 And as your sweat and tears lay on those cobbles, and you get to see the race from nearby and, nearing the final, in one of those amazing Tour-crazed cafe’s where they serve heavy beer from breweries nearby (ever heard of Witkap, Ename, Roman, Dentergem?) to emotional, shy, friendly, agressive, simple and intellectual folk alike, you understand. You know what it means to be a Flandrien. It’s about hard work, ‘afzien’ and ‘sterven’ (i.e.: work your ass off for long hours and low pay). Appreciating sports in Belgium is more about appreciation for the individual. Some first league soccer clubs went broke here last year, and people cared, but not as much as they would for their cycling heroes. The Flandriens aren’t into flashy heroes. They’re all for fighters, guys who worked and worked and worked just for their five minutes of fame. And after a career in the mud, they may have saved up just enough to build their own house. 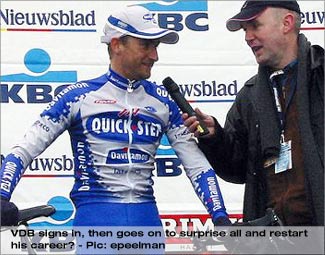 That’s why lost sons always get another chance here. ‘VDB is God’ – ‘God has returned’ it said throughout stretches of cobbles and on all of the climbs. Imagine the incredible history Frank Vandenbroucke has had (some people say he’s the ultimate Flandrien, and that’s flemish guys saying that, but they know he’s from Wallonia, the french part!).

Imagine the pressure Peter van Petegem has had to put up with, those past few months: not winning a thing, his Lotto-Domo team by far not performing as well as last year. But he knew what he was preparing himself for. And he showed. 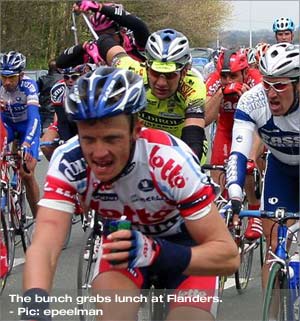 The scenario was perfect. If a race was ever built for these two, it was this one. And they delivered. Both were piloted nicely by their teams, to see a remarkably fresh Van Petegem leave the pack and humiliate even Johan Museeuw on the mount of Tenbosse in the town of Brakel – no coincidence he was born here – and only Frank VDB able to follow him. In Geraardsbergen and on the Bosberg, both tried each other but neither broke. It was the sprint of kings and who won – it didn’t matter, the Flandrien crowd was cheering both of their sons. To be celebrated with more beer of course. 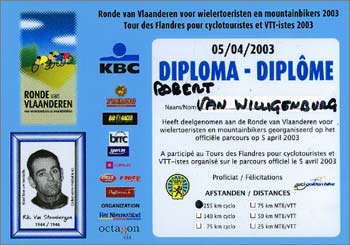 Thousands of fans sign up to ride the Flanders route on Saturday,
receiving a diploma like this, brabging rights, and the respect of all Belgians.

By the way: apart from the 255 km diploma and a medal, I scored Ludo Diercxksens’ waterbottle, a Flemish flag (yes, with the lion) and one of
those pesky cobbles from Lippenhovenstraat, but we can’t show those for legal reasons 😉