This year will be the 87th running of the Ronde, a race started in 1913 in the same manner as many of the other great races – by a newspaper editor looking for a way to sell more newspapers. The Tour of Flanders stands alone as one of the great cycling races, and Daimeon Shanks presents this historical look at Vlaanderen. 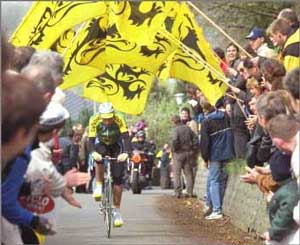 As March draws to a close the professional peloton prepares itself for the first serious races of the year. The stage race specialists have all tested their legs
in the early season races throughout February and March and are set for a showdown at the Giro d’Italia in May, but now, April, is the season for the hard men.

Omloop Het Volk gave us some indication as to who’ll be going well as one-day classics specialists prepare for the legendary cobbles of Paris-Roubaix, the murs of Liege-Bastogne-Liege, and the Dutch mafia at Amstel Gold. It all opens with the first of the cobbled classic, the legendary Ronde Van Vlaanderen, or Tour of Flanders.

Belgium is the heartland of the classics and the Tour of Flanders is the most valued prize in any Belgian’s season. The Ronde was first held in 1913, organized by Karel Van Wynendaele, the newspaper editor of “Sportwereld”, which would later become “Het Nieuwsblad”. The first edition of the race covered an astounding 330 kilometers, a distance that, despite the atrocious road conditions, was not uncommon at
the time. Van Wynendaele first had the idea for the Ronde after watching the epic races Paris-Roubaix and Paris-Bruxelles, both of which were over 300 kilometers at the time. 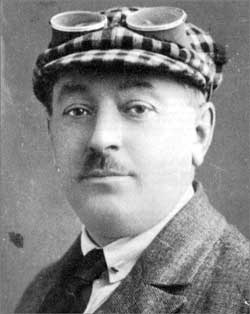 The man who started it all – Belgian
newspaperman Karel Van Wynendaele.

In the 20’s and 30’s the popularity grew enormously. At first, the Ronde was held 14 days before Easter and often clashed with the Italian classic Milan-San Remo. It was eventually moved one week later to allow participation in the both races , the calendar position that it still holds today.

In 1947 the Tour of Flanders became part of the Desgrange-Colombo Trophy series, an early precursor to the World Cup series. This cemented the Ronde, along with Paris-Roubaix, as a pavи classic. In the first half of the 20th century, cobblestone roads were easy to find throughout Belgium. After the second World War, the Belgium government began paving many of the roads previously used in the race. As a result of
the loss of selective pavи, steep climbs were added to the parcours to make the race more difficult and the Flemish Ardennes became the race’s heartland.

The Ronde Van Vlaanderen has always produced heroes on the roads. Riders such as Rik Van Steenbergen, Rik Van Looy, Eddy Merckx, and Eric Leman have all given something special to the Tour of Flanders with their love of the Belgian classic.

Today, Johan Museeuw of the Quick Step-Davitamon squad is the undisputed King of the Ronde Van Vlaanderen. Museeuw won the Ronde three times; in 1993, 1995, and 1998. Second behind former team-mate Andrea Tafi last year, Johan has been in the top three no less than 8 times. In what could possibly be his last season as a professional cyclist, Museeuw will undoubtedly be looking to finish his career with one final win in his beloved home race.