Classic’s Season is upon us, that time of year whan a young man’s fancy turns to wind, rain, cobblestones, mud, and some of the best pedal-hammering, gear crunching, chain-snapping action you could hope for! Yowza Sports Fans! The 87th Tour of Flanders runs this Sunday, but it’s so much more than a single day race – legends are born, great battles fought, history is made… We talked to former Classics star Steve Bauer, about what makes this race so special…

RP – What makes Flanders such a special Classic?

SB – Overall I see each of the Spring “Classics” as special because of the historic routes they trace. Every race, has nostalgic sections of the race course, whether, it’s a particularly unique cobbled climb or sector or a tough climb just in the right distance from the finish to make the race happen. All one day races, they lend themselves to certain individuals or racers that key themselves up for a particular day.

Tour of Flanders was one of my favorites. It was close to home (Gullegem, Flanders) and during my career it was always a top priority for me in the spring. Rain, shine, wind or otherwise the Flemish line the climbs adding fabulous atmosphere to the race. It was the type of race you needed to excel at the battle for position before the cobbled climbs. I really liked the narrow roads and the bike handling skills required to stay in front. Flanders and Roubaix are almost identical in this regard. The whole deal is that once you get to the front you have to stay there, climb after climb. Only the best guys in form make it. I found no matter what condition I had, I could battle to the fore, but only if the legs were really good could I stay there for long. Flanders never fails to deliver an exciting suspenseful race. I remember that in 86, my front tire was first on the fabled Koppenberg (before its renovation) which Graham Watson caught on film. 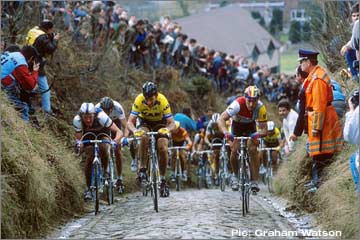 In the same year I went solo, attacking Eddy Planckeart on the Muur de Gerrardsbergen. That was quite a feeling as a second year pro, giving it full stick, on the road to Ninove. The race from behind, was just too strong to hold ‘em off. I was caught at 3 kms to go by Sean Kelly, and Adri Van de Poel after battling a tough, tough headwind even though my teammate Greg Lemond was doing his best work to try to keep them in control. It was a really great memory of Tour de Flanders for sure. I left my sprint legs on the ground by the solo effort finishing 4th.

RP- How do you think the Spring Classics are different from a riders’ perspective today versus when you were racing?

SB – My guess is that these races haven’t really changed that much. The classics seem to be as prestigious as ever. I just hope that they can be preserved in their essence and continue to provide the best professional road racing challenge for years and years. One concern in particular is the preservation of the cobblestone roads. With these monuments in both Flanders and Roubaix these classics would lose their future.

Stay tuned to PezCycling News all week long for more insider previews of the Tour of Flanders.

Steve now runs his own bike touring company. Check out his website www.stevebauer.com for tour details.