On stage 17 of the 2006 Tour de France American Floyd Landis wrote his own chapter in Legends of the Tour. Four days later they ripped the pages out. Landis went from cycling super-hero to villain so fast, he experienced vertigo. One moment the Phonak rider was rolling down the Champs Elysees, flag in hand, the next he was facing a firing squad of journalists, and looking shocked, bitter, and angry.

Ed. Note: This story first ran Feb 16, 2010, but this weekend has been read over 1000 times as readers passed it along on their social feeds.  Given the current state of doping in professional sports, it’s impossible to ignore the suspicion that an epic solo breakaway raises in the eyes of fans today.  Readers will draw their own conclusions, but it’s an interesting revisit to that time 12 years ago.

It’s the story that just won’t go away. Almost four years on, and we’re still feeling the aftershocks of the cataclysmic event that was Floyd Landis’s positive at the 2006 Tour de France. The latest development is an arrest warrant from France for Landis concerning the alleged hacking of the anti-doping lab’s computer in the period following the 2006 Tour. The tale might be one that you feel is left to the forgotten annals of history, but it refuses to be left that way, and in some way, perhaps it is better not to forget. The 2006 Tour de France earned its place as one of the most ignominious sporting events in history. Operacion Puerto got the event started in shocking fashion, and unbelievably, the finale was even more shattering than the opening firestorm. Matthew Walsh takes us back to that volatile July.

A post-stage doping test had turned up traces of synthetic testosterone in his urine. And all poor Floyd had for an explanation was beer and a shot of Jack Daniels. 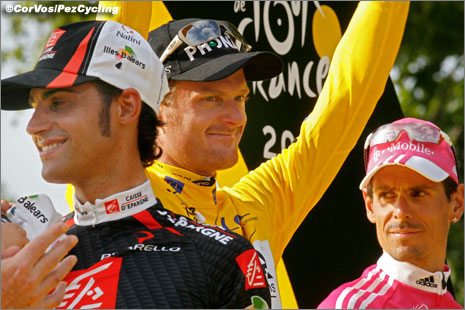 The tour finished in Paris and then Floyd Landis rode straight to Hell. He did make his mark in the world’s most famous stage race: first winner ever to have the yellow jersey ripped off his back. Looking back, it was quite a whirlwind ride. 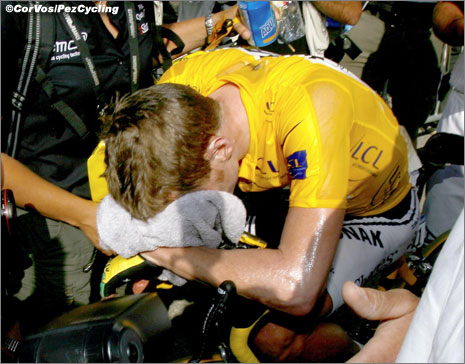 After blowing spectacularly on stage 16’s climb up La Toussiere, Landis had lost ten minutes, his jersey and all hope of victory. “I had a bad day on the wrong day,” he said, in his typical, no-nonsense way. He was dead on arrival, better luck next year, the experts said. Instead Landis woke up the next day so furious that steam shot from his ears like cartoon character Yosemite Sam. 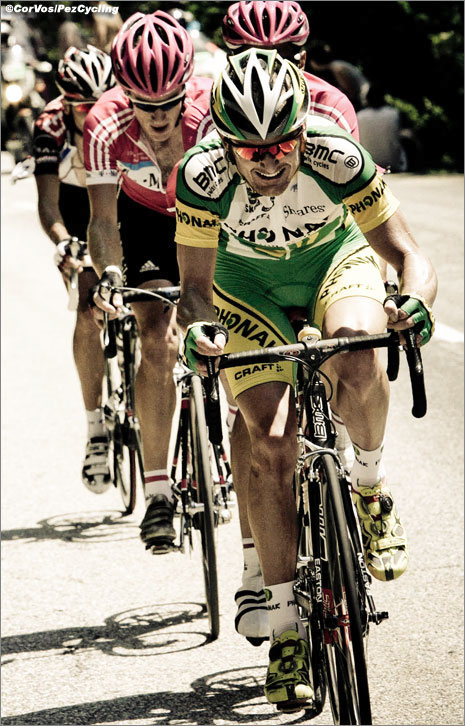 It was the last day in the Alps and it was a leg breaker festival – five major mountain climbs including the hors categorie Joux-Plane. Immediately Landis threw his entire Phonak team on the front and hit the gas hard. As news spread through the peloton that Landis planned to attack, riders begged him not to torture them with an agonizing chase day. The second the road tilted up, he was gone. 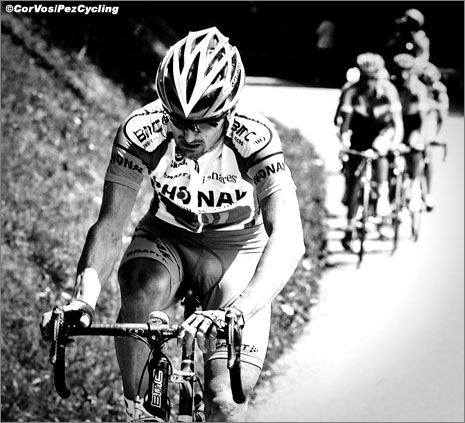 Conventional wisdom and tactics said let him go – it was suicide, irrational, pointless – they’d catch him later, his dead carcass laying on the side of the road to Morzine. There was laughter in the team cars. It was a fool’s move, a desperate longshot so unexpected you couldn’t even get odds. But then the time gap started ballooning, three minutes at the top of the Col des Saisies became four minutes as he powered up the Aravis. Soon the motorcycle chalk board brought more bad news. Landis was six minutes ahead on the lower slopes of La Colombiere. He wasn’t cracking, they were. 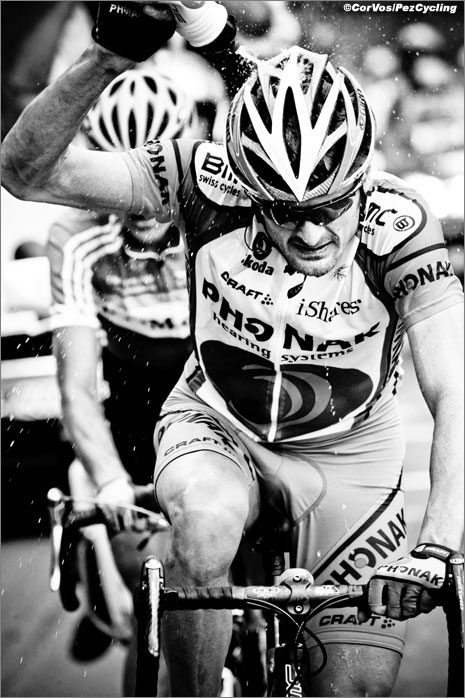 The hundreds of thousands of fans lining the route witnessed the unthinkable, the impossible – Landis clawing his way back into yellow. The tour hadn’t seen a solo attack like this since Charley Gaul over 50 years ago. 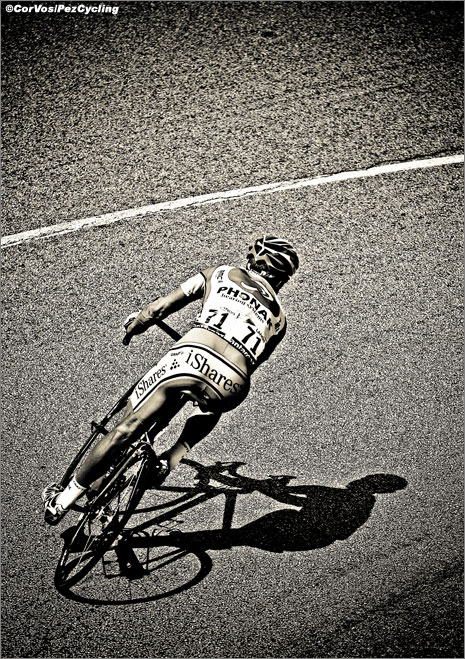 Back in the peloton, podium contenders Oscar Periero, Carlos Sastre, Andreas Kloden and Denis Menchov rode in shock. Still way up ahead and pushing a big gear, Landis relentlessly picked off the eleven riders in the early breakaway. Surely he’d collapse on the hors category col de Joux-Plane, the same 8.5% grade climb that killed Armstrong in 2000. Race radio had an answer and it wasn’t exactly good news. Landis was over seven minutes ahead. The Pennsylvania farm hand was fighting mad and still pumping out more than 370 watts. 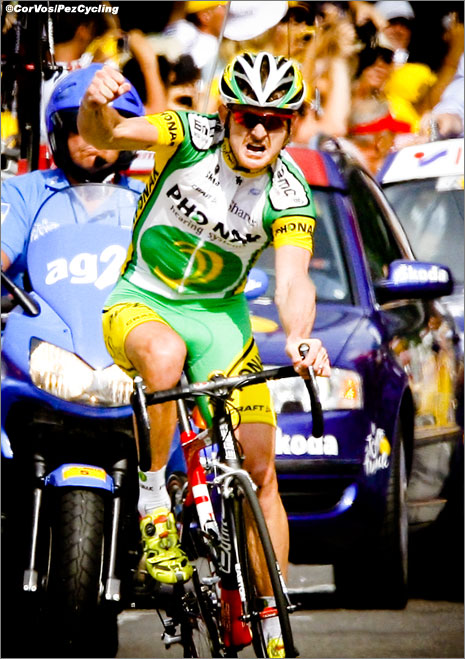 This was everything the French loved: bold, caution to the wind, rolling the dice, all or nothing. Panache, they call it. Landis crossed the finish line with a fiery round house punch, a full seven minutes ahead of Periero and within 30 seconds of reclaiming his maillot jaune. 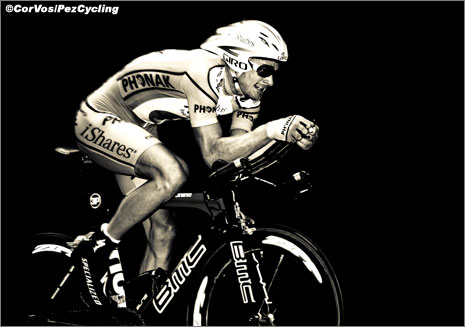 The story line was almost too good to be true: the escaped Mennonite farm boy who once raced in long sweatpants, the rider who blasted Kid Rock in the team bus, the odd ball philosopher, the man who pedaled in constant pain with a decaying, sclerotic hip. Wild man Floyd had demolished all contenders and set up his final victory in Paris with one of the boldest attacks in Tour history. 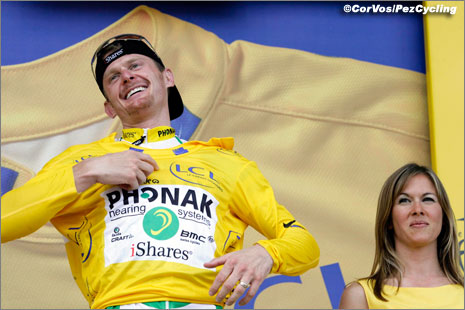 There was a book deal in the wings, a movie script, endorsements already stacking up and the little ranch house in Murietta, California was about to get a major make-over. Landis rolled down the Champs Elysees the coolest, bad ass winner the tour had seen in a long time. The man reeked personality and character. After years of strategic, cold blooded racing from Armstrong and the methodical dullness of Indurain, the Tour had a true hero. 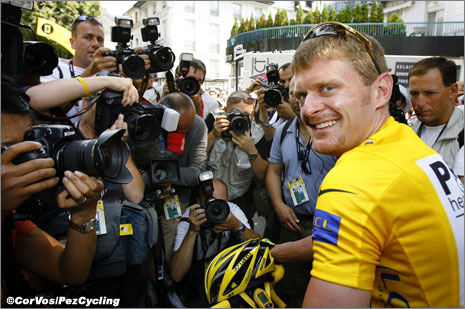 The celebration lasted all of four days before his world collapsed and cycling took another deep plunge into the abyss. On July 27, Tour officials announced Landis’ A sample, taken after his astonishing ride on stage 17, contained traces of synthetic testosterone. “It was another betrayal,” said Tour director Christian Prudhomme, “and a terrible one.” The aftermath was painful and ugly. A furious defense, a nasty, drawn-out public trial and a bitter, two year exile. Landis lost his reputation, savings and marriage. When he returned from his suspension, Landis stayed close to home, signing with a small domestic squad named Ouch. There was irony, if nothing else. Race results were disappointing and Landis didn’t seem to mind much. Hopes for the big comeback faded. 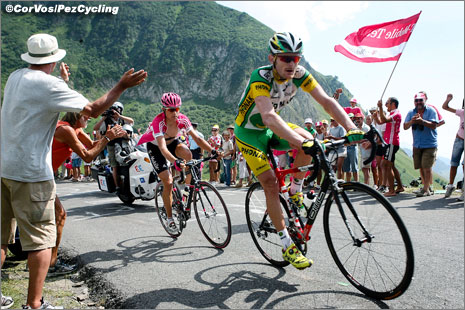 No cycling fan is likely to forget the highs and lows of Floyd Landis in the 2006 Tour de France. It was the best of rides and the worst of rides. Speaking of his terrible collapse during stage 16, Landis had said “I’d change this day if I could, but I don’t know what I would have done differently. So I can’t say I regret anything I did.”

Perhaps that’s true for Floyd Landis. Good or bad, guilty or innocent, he is a Tour legend. The one with the asterisk attached.