The 2006 edition of the Tour de Georgia is over, and it was another fine, wet Spring week in GA. Landis confirmed once again that he has done his homework and to say that he will be a contender for the podium at Le Tour is not much of a prediction. PEZ’ Randall Butler takes a closer look at the Tour de Georgia and its implications to the Big Show.

Call it what you like – I found the Tour of/de Georgia interesting for a few reasons, starting with the timing. In previous editions of the race the presence of Lance Armstrong and George Hincapie was guaranteed to draw a crowd. Using the race as prep for the Tour de France, Armstrong could be counted on to turn up with his “A” team. Not only did this attract the fans but it also provided a reason for other top Euro clubs to show up in earnest.

This year post Lance things were different. Many big names stayed in Europe where they could contest the spring classics or the Giro del Trentino, avoid the jet lag and earn Pro Tour points for their sponsors. And if you were wondering why race sponsors support the Pro Tour with its guarantee of top teams and top riders on the start line, now you know.

Unlike the nascent Tour of California, which found itself a niche in the early season pro-cycling schedule, the Tour de Georgia provided a final tune-up for American pros before heading off for a second tour of duty in Europe. The fans came and while some riders did a no-show, the rest put on a pro-show and we’re glad they did! Because the race provided some interesting insights into what might happen in the Grand Tours of May and July.

Popo Surprises
Yaroslov Popovych surprised early on and I’m not referring to his victory in Stage 2. His almost two minute deficit to Floyd Landis in the 40km TT in Stage 3 left me thinking I won’t be seeing Popo on the podium in Paris. Was Popo holding something back, perhaps under instructions to be prepared to ride the remainder of the race in support of Tom Danielson? Possibly…but it’s hard to imagine a two minute deficit in Georgia getting any smaller in France.

Still, I wouldn’t be taking Popovych for granted and in Stage 2 he showed why we may well see him riding for a stage victory in July – not to mention his constant spot at the top of the daily results: 5th Stage 6 (sprint), 3rd Stage 5 (B-Town), 3rd Stage 4 (sprint), 9th Stage 3 (TT), 1st Stage 2 (foiled sprint), 11th Stage 1 (sprint). There’s a reason Popo finished only a couple of points behind Freddie Rodriguez in the Points Classification. 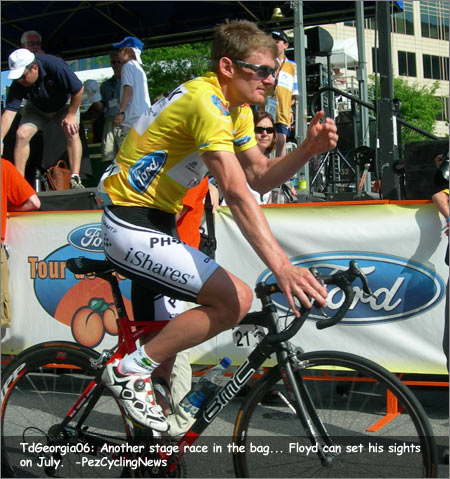 Floyd continued his magical season in Georgia, nailing down his third major stage race win of a still young 2006.

Landis Rises
Not surprising was Floyd Landis’ TT victory on the day. He began his season with a win over pain-loving Dave Zabriskie in the Tour of California TT and went on to an overall GC title at Paris-Nice. So when Landis won the TT in Georgia and followed it up with a nose-to-nose duel with climbing ace Tom Danielson on Brasstown Bald, things became clear – if they weren’t already. Landis is gunning for the podium in Paris and looks to be packing enough artillery to get the job done. With Lance retired and Ullrich couch training, le Tour 2006 is going to be an open race. The smell of blood is in the water and Landis has been working hard to be ready to capitalize on the opportunity. 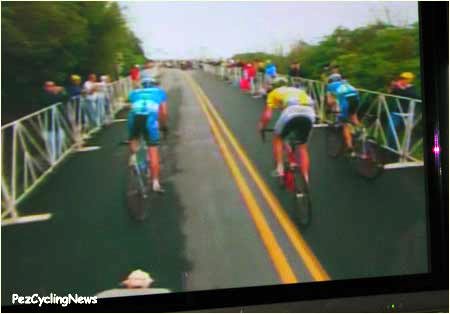 Popo and Danielson formed a great duo, but not enough to disrupt the Floyd.

Danielson Reprises?
But what about Tom Danielson? Cagey Johan Bruyneel has been awfully quiet about season plans for the rising star. Perhaps not wanting to create expectations with all the media pressure that goes with it, Bruyneel has been content to let his young protйgй build form out of the limelight. But this week was exam time.

Danielson didn’t disappoint. Showing Dave Zabriskie his dossard in the TT and making Landis lose his hair on Brasstown Bald, Danielson showed he’s got it all. And he rode with the maturity of a veteran – perhaps something he picked up from one of his better known domestiques at the race here a year-ago. Is Danielson ready to do something at the Giro, or perhaps even le Tour? Sure, we all know he rode the Giro last year. Hot on the heels of his Tour of Georgia victory the young gun showed up in Italy full of hope. Misfortune took him out of the race as he abandoned with a knee problem before the road got vertical. It’s a long way from Brasstown Bald to the top of the Mortirolo but…will this year be payback time? 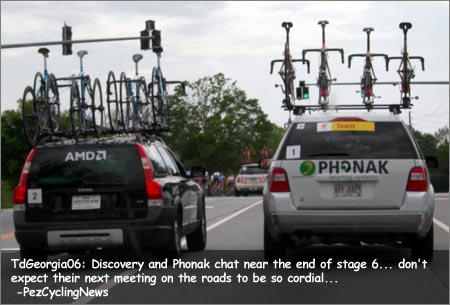 Bruyneel Surmises
Bruyneel hasn’t said much about Danielson, knowing well the differences between success in a one-week tour on North American soil and a three-week campaign on the roads of Italy or France where the best in the world fight for fortune and fame. But with the Giro and le Tour on the immediate horizon, we will soon see how Bruyneel chooses to play his cards. There were a lot of interesting signs for the future coming out of the Tour de Georgia and Tom Danielson is one of them.

Basso Vs. Ullrich: 2 Paths To Paris