For What It’s Worth: TDF Prize Money

When there’s no racing to keep us busy, we pop-cult journos turn our eyes to other matters, like how green is the grass on the other side of the fence. Or in this case, how much money can you win at the Tour de France? 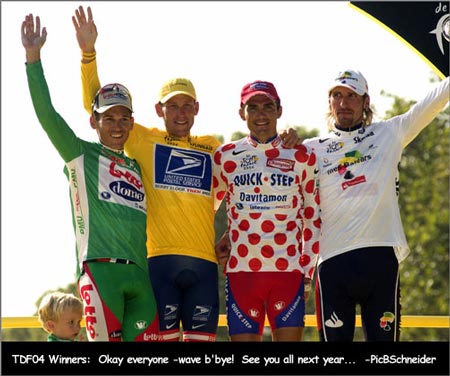 Now obviously, the biggest chunk of that goes to whoever finishes on the Champs-Elysees in the Maillot Jaune. For the last six years, that’s been Lance, and last year he took home 400,000 euros for that honor. But not to despair, there’s plenty left to go around.

Second place, the German National Champion Andreas Klцden went home with a check for 167,495 euros, and Mr. Ivan Basso took home a nice 91,470Ђ. Ending up on the Champs-Elysees in the Maillot а Pois was worth 22,867 euros in 2004, meaning we know where Virenque got the money for that coat he wore to the TDF 2005 route presentation.

What does riding a wheelie on a road bike get you? Nothing, but if you do it like Robbie McEwen did, and also finish the Tour in the Maillot Vert, you too could earn a cool 22,867Ђ. The Maillot Blanc is worth just a little less, finishing the tour in white brought Vladimir Karpets 18,294Ђ.

Virenque needs to keep winning to finance his taste if faux-fur jackets, while Voeckler needs a few more dys in yellow to afford one.

But what about our dear Thomas Voeckler? He filled the French cycling public with passion during his 10 days in yellow this summer. But he wasn’t left high and dry, a day in the yellow is worth 350 euros, meaning he took home 3,500 for his incredible riding.

But that’s not all! A day in one of the other jerseys is worth 300 euros, and Thomas had 14 days ii white on top of his time in yellow. That also means that Olympic Gold Medalist Paolo Bettini was bringing in 300 a day for the KOM jersey for the first week, despite there not really being any mountains!

For some riders, a stage win at the Tour is the biggest win of their career. In addition to getting your picture in newspapers across the globe and kisses from the beautiful podium girls, a stage win will bring you the handsome sum of 7,620 euros.

So after all this money’s been handed out, where does that leave old Jan Ullrich? Well, there’s always the 15,000 euro prize for best team, which the T-Mobile squad won this year, so Jan definitely didn’t go home broke.

Yes, that’s the money available at the biggest cycling event in the world. Impressive isn’t it? Yet its still only 10% of Shaquille O’Neal’s yearly salary… But if you want to read about it in French – check L’Equipe – who provided the numbers.

Breckenridge Cartwright is a 30 year old American actually living and working in Paris. He recently married his French girlfriend, and is enjoying the riding around the City of Light. He loves cyclocross, and yes, that’s his real name, but you can call him “Breck” for short.

HOMEBOY Belgium: Ode to the Off-season