Franco Ballerini: One Race Is One Man’s Legacy

The loss of Franco Ballerini is not one that will be forgotten anytime soon. The sport’s best are at a loss and two of the greatest riders of our generation, Mario Cipollini and Paolo Bettini, are lamenting the loss of a brother. In this painful time, Peter Easton takes a second look at the man and the race that defined his career.

In 1980, Frenchman Gilbert Duclos-Lasalle finished 2nd to former World Champion Francesco Moser in Paris-Roubaix. The 25 year old Duclos-Lasalle withstood constant attacks from the Italian in the closing stages before finally conceding. Sometimes steely resolve alone cannot change the course of history. While Moser went on to win his third consecutive Queen of the Classics by nearly two minutes, Duclos-Lasalle would come up empty as a Paris-Roubaix favorite for another eleven years. 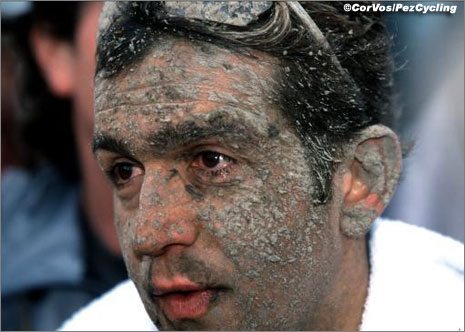 While each year his target was victory, what he did not plan was how his destiny would be written, from being second best in his youth to the oldest winner in history. While one victory is enough for many, Duclos-Lasalle said he still felt the desire to race, and to win, and to prove his point, he defended his title in 1993. The man he beat that April Sunday was Franco Ballerini. 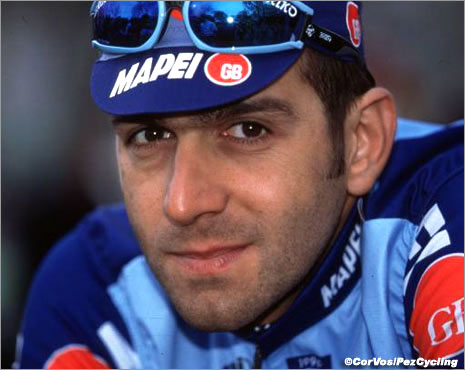 Clearly the stronger rider, the 27 year old Ballerini was outwitted in the sprint by the more experienced Frenchman. The photo finish declared Duclos-Lasalle a winner by eight centimeters. After having raised his arms in triumph, Ballerini was inconsolable as second best. When asked by a reporter if he had made any errors, a distraught Ballerini replied “yes, I made the mistake of becoming a bike racer.” 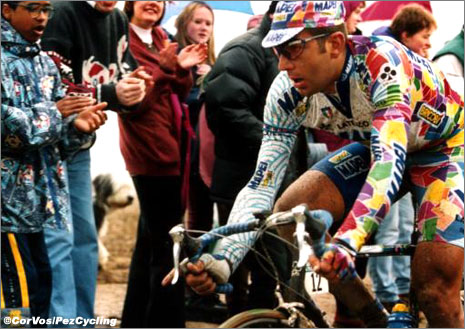 In the 1990 Paris-Roubaix, Steve Bauer lost to Eddy Planckaert in a photo finish. He never came close to winning Paris-Roubaix again. Each year is a new opportunity for a rider to start with a clean slate, to change their history, to rewrite their fate in the record books. A rider can cement his legacy, or create one, with one historic ride across the stones that connect Compiegne to Roubaix. Paris-Roubaix does not need to rely on poetry to market itself.

It lays dormant all but one day a year, rising up the second Sunday of every April to mock those riders who avoid it, and unleash a storm of brutality on those who dare tread on it. It is often said that to win Paris-Roubaix you need to rely on good luck and pray you don’t suffer from bad luck. But what of the man who is unsatisfied with his legacy? What if he consciously decides it is up to him to change his destiny, luck or not, and redefine his place in history? 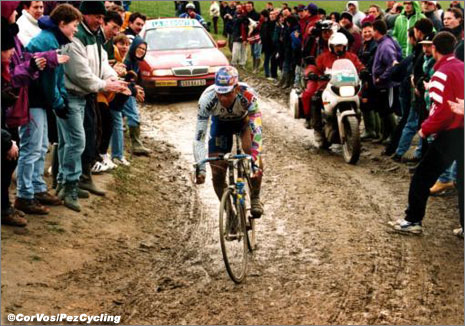 After his narrow defeat, how many nights did Franco Ballerini lay in bed staring at the ceiling, wondering if he had what it took to face Roubaix again, and would he ever have another shot at victory. He could hear the demons whispering, asking him what he would do the next time he flats at a crucial moment, or finds himself in the winning break. What if you have to sprint for victory again, Franco?

Is luck, good and bad, just a part of Roubaix, or do the real champions develop a mindful approach and create that winning scenario in their head, turning disaster into victory? How many times can tactics be second guessed, strength analyzed, and weaknesses criticized when missing out on what at the time may seem like your one chance at etching your name into history. Would the sport forever remember Franco Ballerini’s 2nd place photo finish as his almost moment? 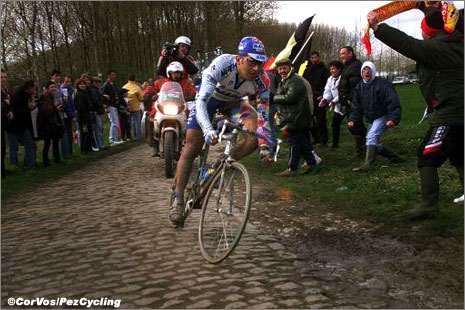 In 1995, the Mapei-GB team had an all-star roster at the start of Paris-Roubaix that included Johan Museeuw, fresh off his second win in the Tour of Flanders and the undisputed captain; Andrea Tafi was beginning to show signs of strength that would net him victories in Paris-Roubaix, the Tour of Flanders, the Giro di Lombardia and Paris-Tours over the next eight seasons; Gianluca Bortolami was the defending World Cup champion and Wilfried Peeters was the ever faithful lieutenant. Ballerini had woken from his nightmare and managed to finish 3rd in the 1994 Paris-Roubaix, and was again looking for his shot at redemption. 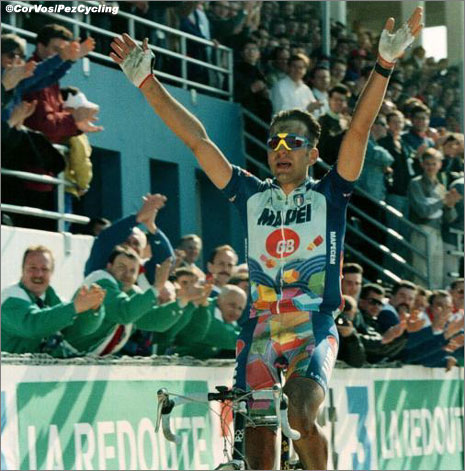 He seized his moment on this day, and rose above the mental blocks and the nightmares of two years earlier. He took control of the race, and his destiny. I remember receiving the first issue of VeloNews following his victory. A glorious photo of Ballerini graced the cover, alone in the dust and on the cobbles, on his way to cementing his legacy in a race he had dreamt of winning since he watched Francesco Moser on TV in 1980. 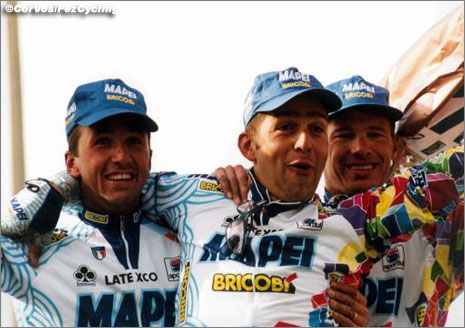 Perhaps there is some analogy to be taken from this, some higher meaning. Can riding this course that we know as l’Enfer du Nord be considered a redemptive pilgrimage, an annual penance through purgatory? Each sector methodically removes more sin, the suffering across the minefields slowly purifying the rider until reaching the holy waters of the Roubaix velodrome, the vestige of its winners glistening from the stalls where the finishers weep. After this symbolic cleansing, are we not now ready to face any challenge? Perhaps, but I don’t think so. Even the devil has a hard time glorifying hell. 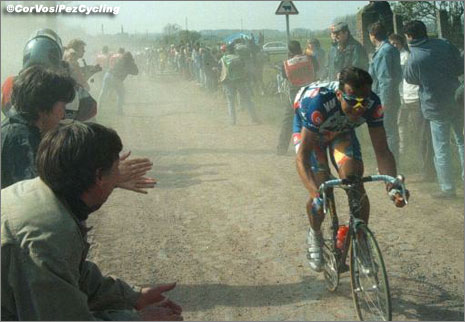 When Ballerini rode his final race in 2001, it was fittingly Paris-Roubaix, and it was for Mapei. He finished 32nd, 8:13 behind winner Servais Knaven. As he crossed the finish line in the Roubaix velodrome, he unzipped his jersey to reveal his undershirt that read “Merci Roubaix”. This was his chance to say goodbye, to thank his supporters, those who never lost faith that he would return and win, to those who felt the heartbreak of those eight centimeters. 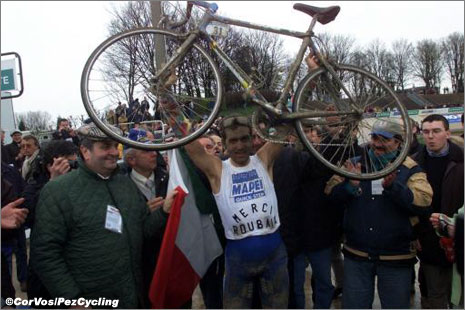 He had been to hell and back, had felt the heartbreak of losing, and ultimately seized the chance at rewriting history in the race that would ultimately come to define his career as a rider. His untimely death has taken away the opportunity to say goodbye to him, to thank him and to let him know we never lost faith in him. For me, the legacy is Franco Ballerini, 2-time winner of Paris-Roubaix. And that is forever. Merci, Franco.

Peter Easton heads up VeloClassic Tours, but more than that, he’s a steward of cycling history, a vast deposit of cycling knowledge. With that knowledge comes a unique perspective, a greatly valued perspective. Thanks for the tale, Mr. Easton.
Like PEZ? Why not subscribe to our weekly newsletter to receive updates and reminders on what's cool in road cycling?

Pro Shop: A New Season Ahead!